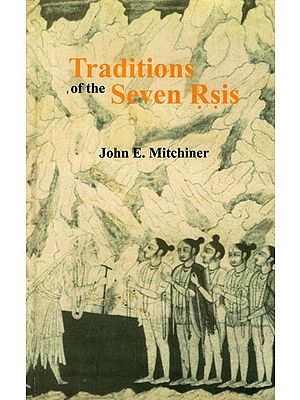 Traditions of the Seven Rsis (An Old and Rare Book)

Ascetics and mystics have played a prominent role in the development of nearly all religious traditions. The particular importance of such figures within Hinduism is especially evident in the traditions recounted of the Seven Rsis - the seven archetypal sages or seers who through their ascetic practices attain heaven, commune with the gods and are absorbed into the mystical absolute or brahman. The Seven Rsis are depicted as being more important and powerful than even the gods themselves indeed, through their asceticism the Rsis become the progenitors of the gods, as also of men, demons and all other orders of creation. Traditions of the seven Rsis is the first systematic study of these traditions, and consists of two separate but closely related parts: the first part is a text-historical examination of how and when different traditions were formulated, while the second part explores the various activities and ideas associated with the Seven Rsis. Basing his study on the Sanskrit sources, but making use also of Tamil, tribal and non-Indian sources, Dr Mitchiner sets out the main traditions associated with the Seven Rsis and traces the underlying themes in those traditions - particularly that of the creative role of these ascetic figures. The work encompasses a wealth of original literary material, much of it previously untranslated, and is both a sourcebook of the Rsi traditions and a study of the historical development, symbolic meaning and interconnectedness of those traditions, illustrating above all the dynamically creative role of the ascetic and mystic within Hinduism.

JOHN EDWARD Mitchiner graduated from Bristol University and obtained both M.A. and Ph.D. from the School of Oriental and African Studies, London University where his doctoral thesis was on the Sanskrit traditions of the Seven Rsis. Between 1977 and 1979 he held successive research fellowships at Visva-Bharati, Santiniketan, and at Calcutta University. After Completing the present work, he joined HM Diplomatic Service where, following assignments in Turkey, New Delhi, and Switzerland, he has held appointments as Ambassador to Armenia and as British Deputy High Commissioner in Calcutta. He has travelled extensively throughout India, the Middle East and South-East Asia, and is the author of Studies in the Indus Valley Inscriptions, The YogaPurana; and Guru: The Search for Enlightenment as well as of numerous articles on Indian history and religion.

The Rsis (pronounced "Rishis") occupy a uniquely important place in Indian literature and thought. Particularly in the Epics and Puranas, the Rsi-tradirions receive more attention than those of the gods themselves-indeed, the Rsis are the progenitors of the gods, 'as also of men, demons, and all other orders of creation. The Rsis may be classified as both ascetics and mystics. They are prominent performers of tapas or asceticism in various forms-as also performers of sacrifice and visionary seers of hymns; they also attain heaven through these various means, where they commune with the gods and merge with brahman or the Absolute. Yet more than this: the Rsis are also stars in the sky, a position which they attain through their ascetic practices; they are the breaths of life in the body, result- ing again from their asceticism and from their merging with brahman ; and they are also the progenitors of all creation, the founders of mankind. All of these various roles are inter- connected and interact with each other, and these are some of the traditions which we shall be examining in this book.

Two main approaches have been adopted to the study of the Rsi-traditions, and the book is accordingly divided into two main parts. The approach in Part One is text-historical: it examines the formulation of different traditions, analysing the processes as well as the various causes and influences which have brought about changes in the traditions. The first part also constitutes the ground-work for Part Two of the book, which aims at understanding the nature of Rsi-hood through examining the various• activities and concepts associated with the Rsis-thereby illustrating the place of the Rsis within the religious and philosophical framework of Hinduism.

The amount of material concerning Rsis in general is vast; no study could ever hope to encompass all of their traditions in a single volume-or indeed in many volumes-and a number of limitations have therefore had to be imposed in the present work. Especially in later texts, a bewildering variety of Rsis is mentioned : brahma-Rsis, deva-:Rsis, vipra-:Rsis, parama-:Rsis and maha-:Rsis; raja-:Rsis and sruta-Rsis. jana-Rsis, tapa-:Rsis, satya-Rsis and kanda Rsis ; Rsi-kas, :Rsi-putras, :Rsi-pautras-the list becomes almost endless." Many of these categories are somewhat artificially fabricated; others refer to particular categories of sages or ascetics-such as the raja-:Rsis or royal Rsis, a term which is used especially of kings who attained the status of Rsis through their ascetic practices or wisdom in sacred matters. In this book, we shall be dealing exclusively with the Seven Rsis-the most important of all the Rsis, as indeed the ancestors and progenitors of all other Rsis ; the traditions of the Seven Rsis are the most voluminous of all, and themselves encompass virtually all the themes which are met with in the individual traditions of other Rsis. The Seven Rsis are themselves referred to as brahma-Rsis/brahmarsis ("Brahmin-:Rsis"), deva-Rsis/devarsis ("godly Rsis"), vipra-:Rsis/viprarsis ("inspired" or "Brahmin Rsis"), parama-Rsis/paramarsis ("supreme Rsis "), and maha-:Rsis/ maharsis ("great Rsis") in various contexts; and like the Maha- bharata, one might even say that whatever is worth knowing about other Rsis is contained within the traditions of the Seven Rsis, Nonetheless, the present work does not claim to be a Mahiibhdrata of the Seven Rsis ; but it does attempt to cover all the main themes which are met with in the traditions related of them. The identities of the Rsis who are included in the group of Seven Rsis are discussed in the first chapter.

The term Ni has sometimes been translated as "Seer" or "Sage": but, as will become clear during the course of our investigations, these translations are somewhat inadequate.' The form "Rsi" has therefore been retained throughout the book.

The sources used are primarily those of the Sanskrit tradition, encompassing especially Vedic, Epic and Puranic literature; reference is also made where a ppropriate to Tamil texts and to Indian tribal material, as well as to prominent parallels in extra-Indian sources and contexts. In the case of cited passages, these are usually translated verbatim from the Sanskrit; but where the original account is either excessively lengthy or not relevant in its entirety (as is the case in a number of instances in Part Two of the book), the form cited is a summary of the original.

CONCLUSION TO PART ONE 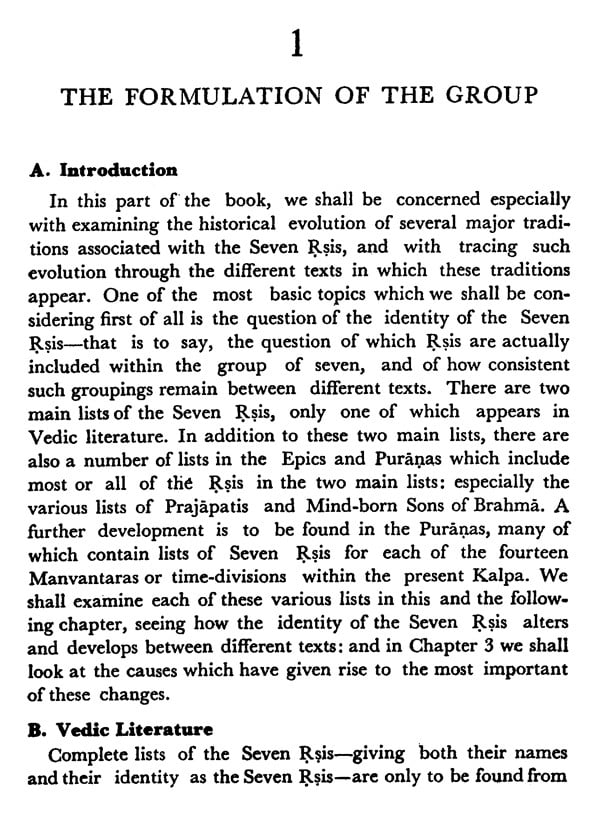 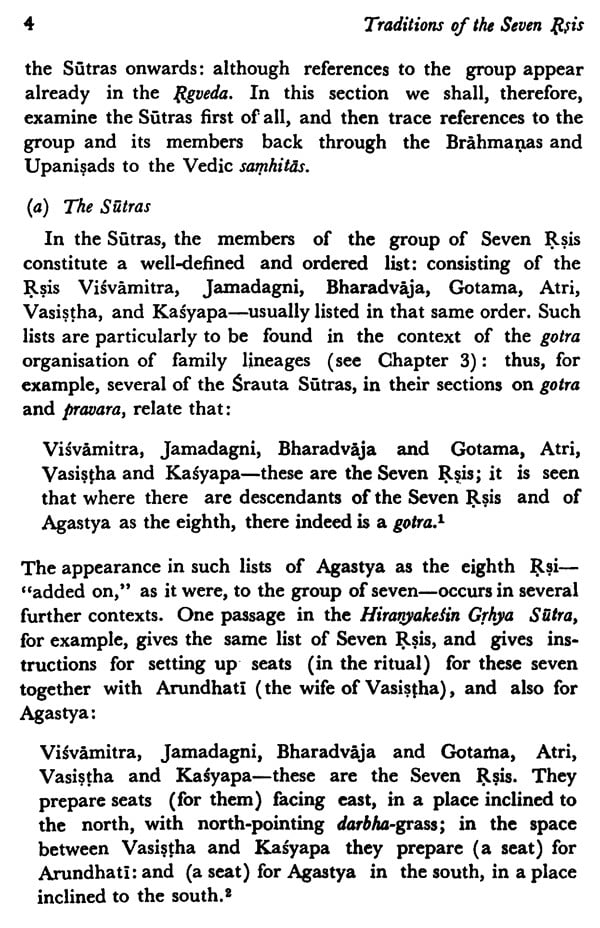 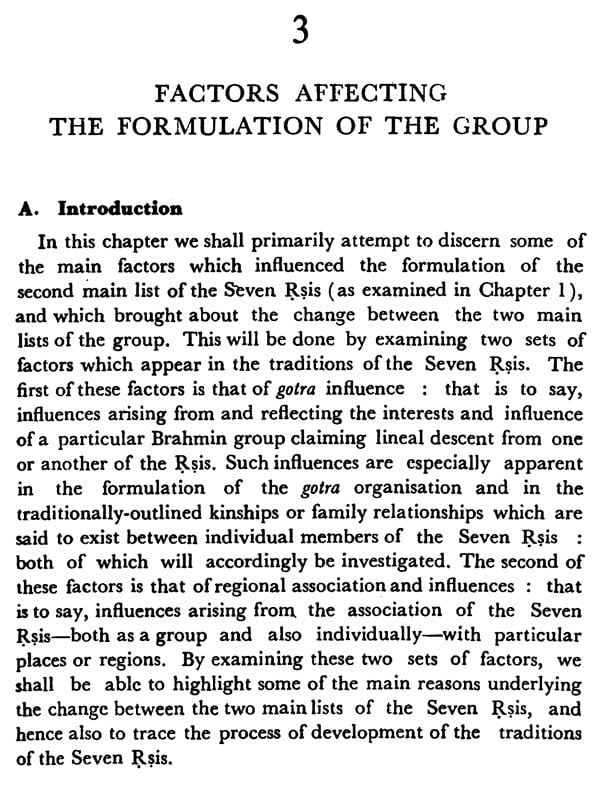 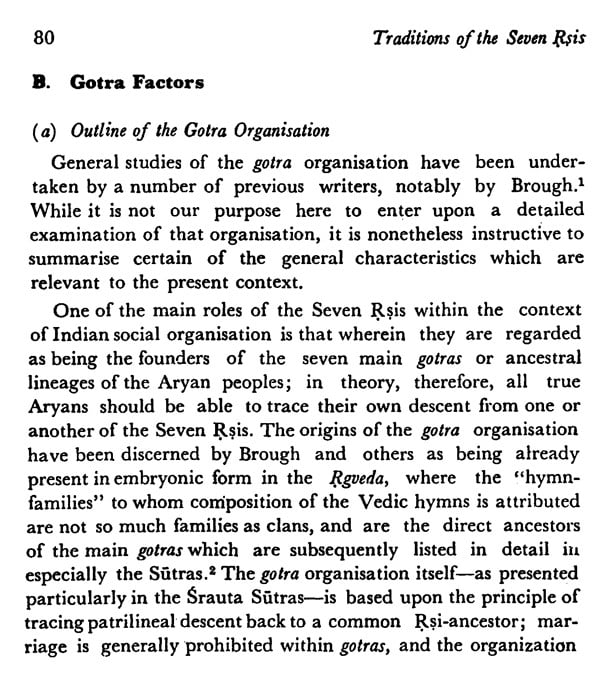 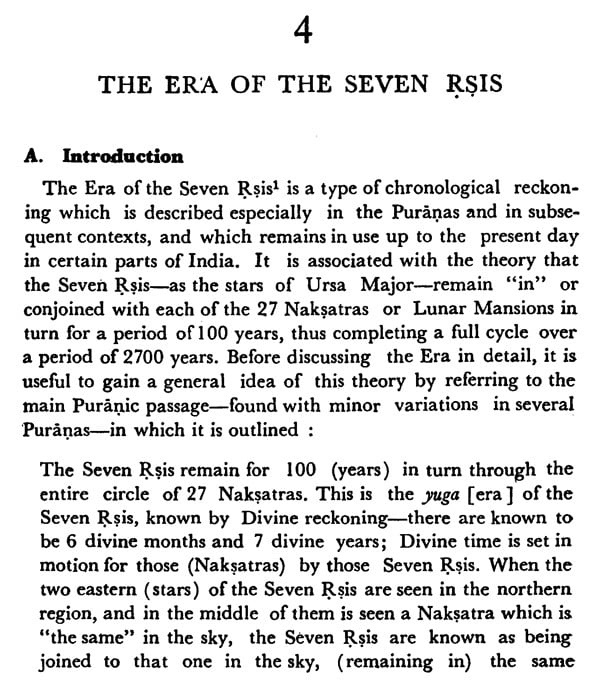 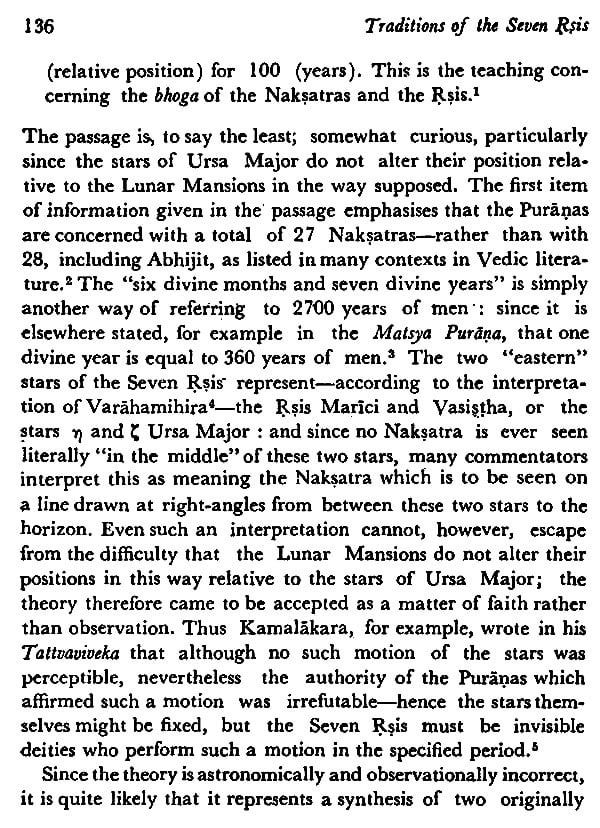 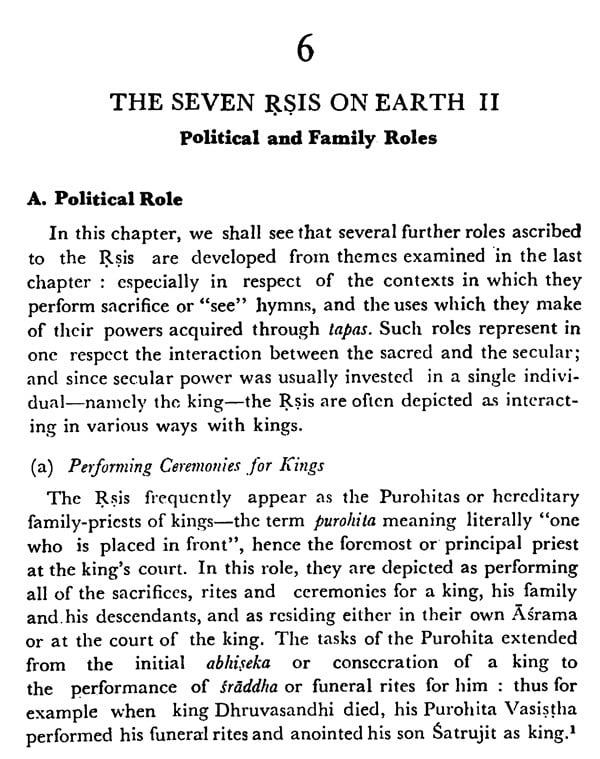 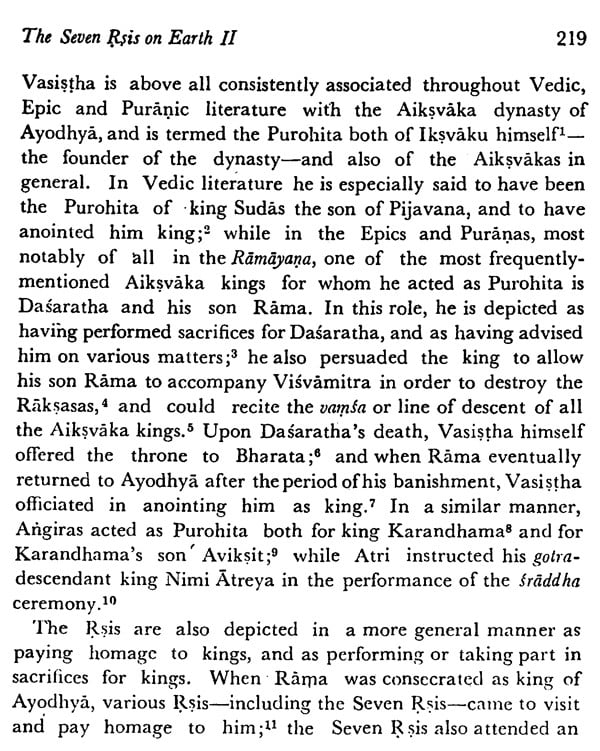 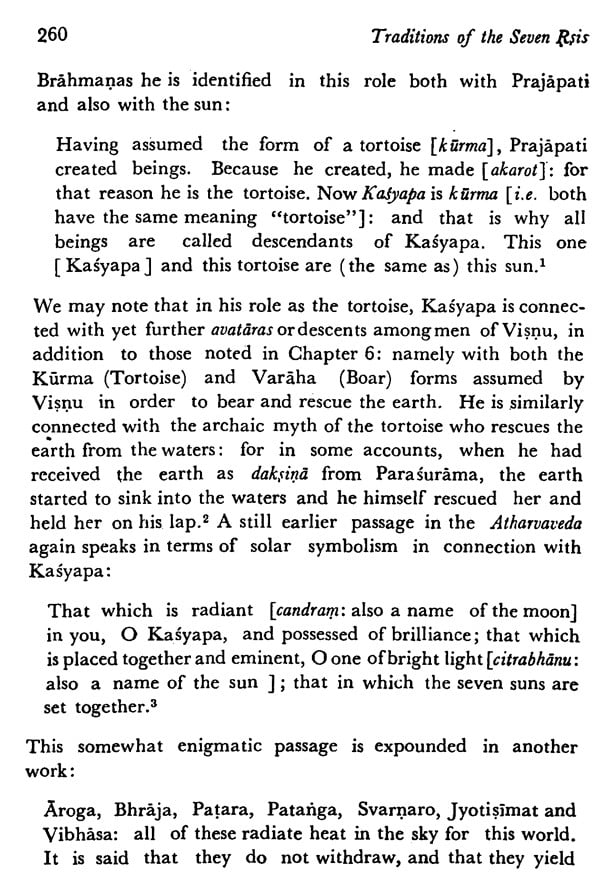 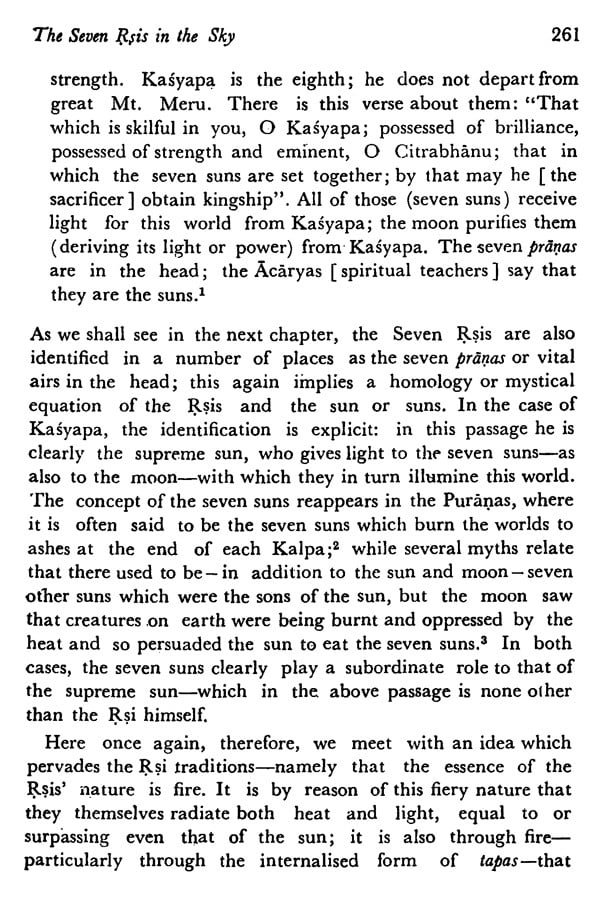