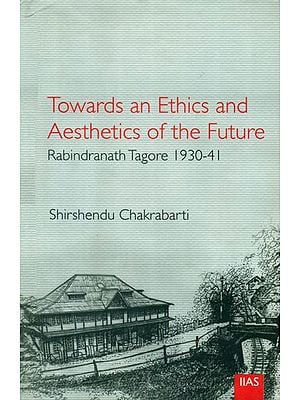 Shirshedndu Chakrabarti is a Professor in the Department of English, University of Delhi. Education at Presidency College. Calcutta and St Stephen's College, Delhi, he went on an Inlaks scholarship to Trinity College, Oxford, where he completed a D. Phil. On Jonathan Swift in 1981. Before teaching at the English Department, Delhi University, he taught at St Stephen's College and Jadavpur University (Kolkata). He was a Commonwealth Academic Staff Fellow for post-doctoral studies at Trinity College, Oxford (1986-87) and a Visiting Fellow at Jaaharlal Nehru University (1989) and Jadavpur University (1994). He was also invited to a Tagore Fellowship at the Indian Institute of Advanced Study, Shimla (2012-13). He has published on diverse areas of English / European literature from the Renaissance to the eighteenth and nineteenth centuries and on the visual arts. He has also published extensively (both in Bengali and English) on Modern Bengali literature, including Tagore and translated poetry from Bengali to English and English to Bengali. He has two volumes of poetry in Bengali to his credit. He is particularly interested in the mutually invigorating relationship of literature and intellectual history, of philosophical questions and artistic form or the larger complex of style.

The germ of this project lies in my perception of the sustained mood of unattached observation stemming, as it particularly-though not exclusively-the poetry of the closing decade of Tagore's life. While analysing this stylistic tendency, I attempt to extend my argument to an exploration of the relationship between abstract ideas and their reincarnation in artistic from. How is the abstract experiential authenticity in a poem, a novel or painting? What is the relationship between intellectual history and art? Within this broad philosophical rubric, I wish to concentrate on the artistic output of Tagore, specifically on the fusion of aesthetics and ethics. Such an interpenetration of the abstract and the concrete is particularly relevant to Tagore. At the first Indian Philosophical Congress (21 December 1925), he overcame his initial reluctance to preside precisely became, according to him, the adversarial relationship of philosophy and poetry in the West not obtain in India.

My position springs from the conviction that the mode of entry into a work of art is always its form and the larger complex of its style and it is only through the latter that we may grasp the ideas as a kind of dissolved but distinctive presence in it. The film director, Satyajit Ray, had highlighted the primacy of form in matters artistic when he declared memorably in a lecture in Kolkata about three decades ago that the lousiest have been made on the loftiest of themes. From another and complementary direction, we can say that form is the preoccupation specific to an artist wherein he is able to receive and in receiving transform the intellectual life of an entire age. When Tagore received a lot of hate mail for his depiction of Hindu family was a sensitive medium, through which society or history in the making expresses itself. Similarly, if we enter into world of Balzac through his fiction, we will not encounter the Tory politics for which he was known but realize the fidelity with which his work intuitively grasps the very formation of mid-nineteenth-century Europe, including its tendencies and possibilities. Examples can be multiplied. What I wish to emphasize is that the key to Tagore's oeuvre and vision is his actual artistic practice through which we may arrive at its relationship to his transformative notion of human nature within a certain time, and tradition. Specifically, I will attempt to explore the intermeshing of an ethics and aesthetics of freedom and simplicity in Tagore.

The aesthetic search for simplicity in Tagore's artistic oeuvre is inseparable from the ethical goal of freedom from attachment or power. While he no doubt conceptualized this goal in terms of Indian metaphysical traditions, the Upanishads in particular, his vision was not backward-looking or revivalist like to some extent that of Coomaraswamy. What brought metaphysics alive to him was his re-discovery of the poetry-Vaisnava Bhakti or Baul-of demotic mysticism involving the surrender of the ego. This might again appear to be an escape from contemporaneity but it is turned into a critique of the alienation that affects modern society. In this sense he struggles towards an alternative modernity emancipated from the binary of the East and the West, adopting with eclectic freedom elements from both and developing a vision of the future. Insofar as this future is centred round the visibility of the individual human being unburdened of all divisive abstractions, the individual, in other words, as the best picture of common humanity, it dwells more in the realm of imperishable possibility than in a realizable time-frame.

The slackening of the ego, suggested above, constitutes a subtle critique of the appetite for power and predatory competition that underlies through colonialism to India. The critique thereby has a radical political edge to it; if it sees somewhat muted, it is because of Tagore's artistic dissatisfaction with pragmatic compromise. Specifically, Tagore anatomises the master-servant relationship inherent in colonialism to reveal the strange interchange ability of those supposedly adversarial categories. But once again, what I hope to analyse is not so much these ideas, assumptions and issues within the context of discursive prose but their subtle, dissolved presence in the large complex of style and form. For example, in the last decade, which in many ways been the starting point of this project, we may notice a pervasive mood of idleness and unattached observation that given artistic life to the ethical goal of freedom from desire and ultimately questions the frenzied and seedy sensationalism of much modern poetry of the West, tendencies which, for Tagore, stemmed from a philosophy of greed and domination. As he puts it in The Arlist (1930), the artist does not use the world's laws for his purposes of power, for he has no drive to power.

Tagore's entire work is characterized by mutually invigorating antithetical impulses. An almost ascetic search for the hard truth underlying the illusory nature of life is complemented by celebration of this illusory veil not by blindly submitting to it, but by an undeceived, willing and playful participation in it. For him, the truth of human existence is thus to be found in neither ascesis nor sensuousness. It coheres around the concept of evanescence. He traces the haunting sense of the meaninglessness of life, particularly in his late work, to the delusion of permanence. If life is at bottom meaningless, both the divine Creator and the artist infuse meaning into it not by asserting its substantiality-that would mean submitting to illusion-but quite the opposite, by foregrounding and immersing in its insubstantiality and evanescence. Maya obscures truth when it is not seen as a veil; once it is seen as a veil, however, it reveals truth. It is in this sense that he sees death as the prime mover of life.

The delusion of permanence is inseparable from the drive to power at the heart of all gigantic and labyrinthine structures. Historically Tagore associates these structures with the industrialized modernity of the West manifesting itself in modes of domination and control, in the phenomenon of reification and alienation within and imperialism without. Thus, the aesthetic of lightness and simplicity articulated in his late writing offers in its ethical dimension a radical critique of power abetted by scientific conceit, technological superiority and rationalised greed. Oppression is not unrelated to repression and it is not a coincidence that Tagore questions the drive towards tortuous interiority in Western art, although he concedes that it is the destiny of post-War Europe. His favourite motif of coming out into the open, severing the entanglements of enclosed domesticity and calculation, places the human subject within a framework of shared humanity. This ethical extension is matched by a parallel process in the aesthetic of lightness, for it is the smallness of the age unburdened of power that makes possible the awareness of vastness. 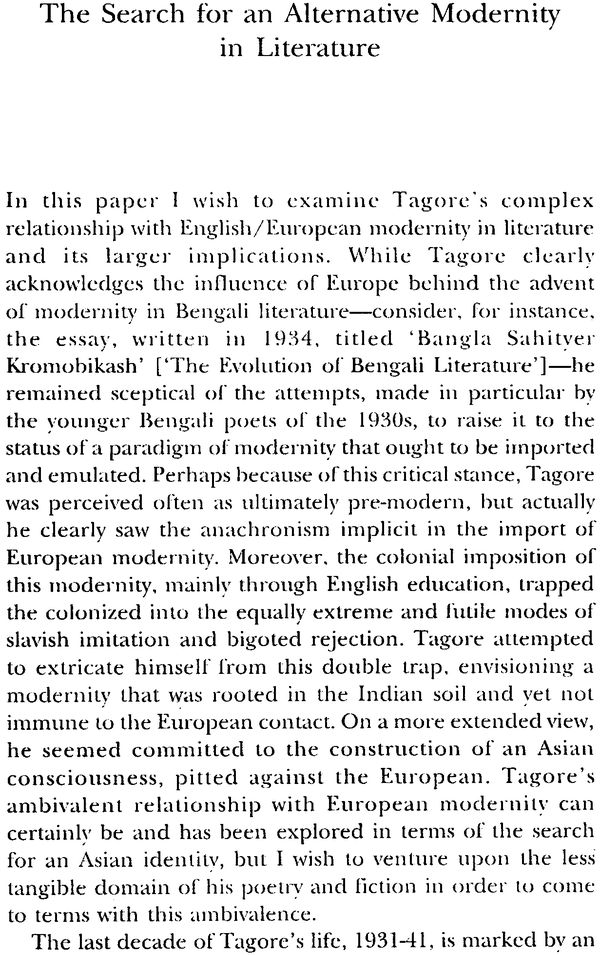 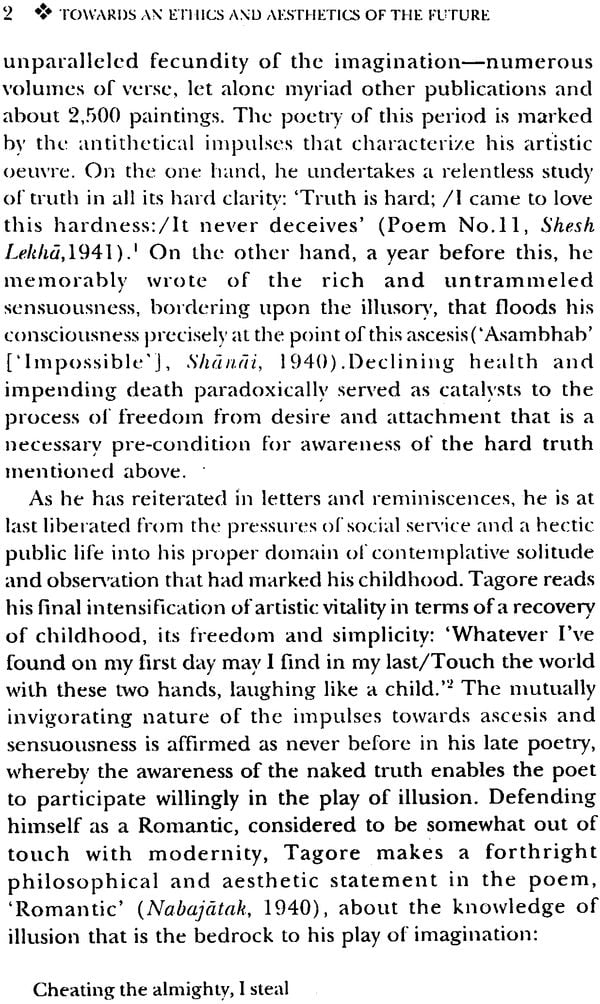 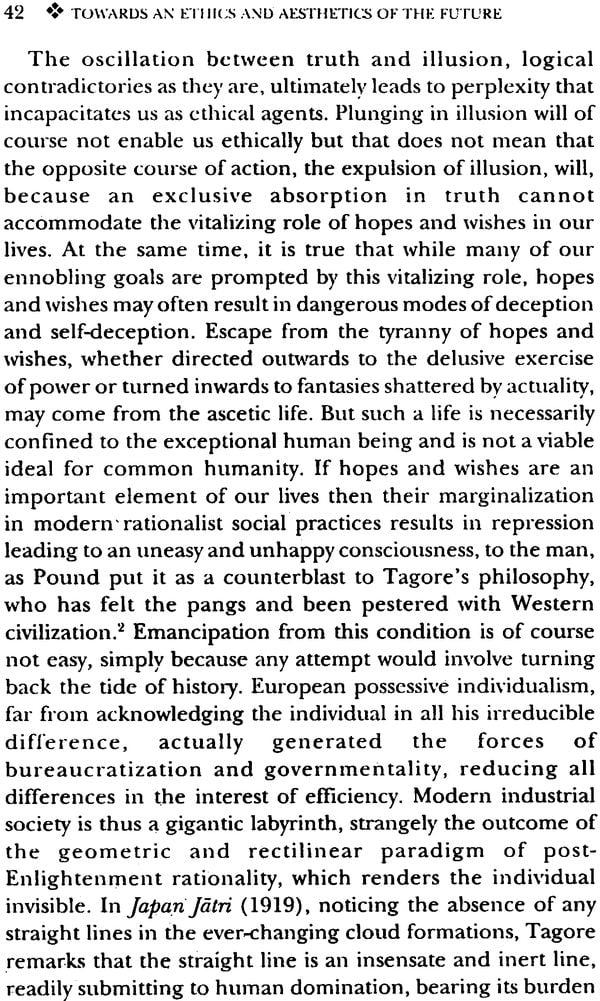 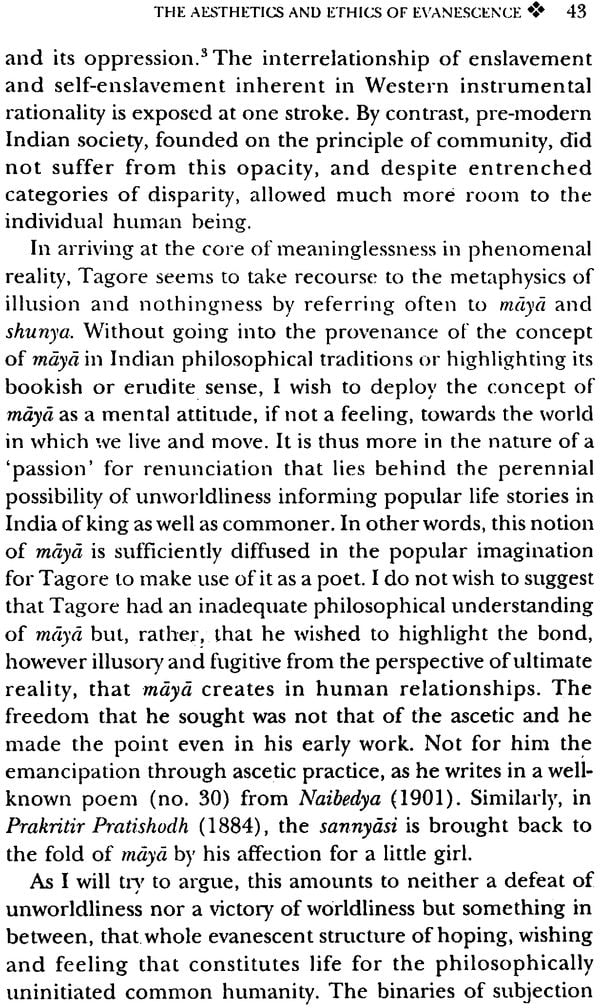 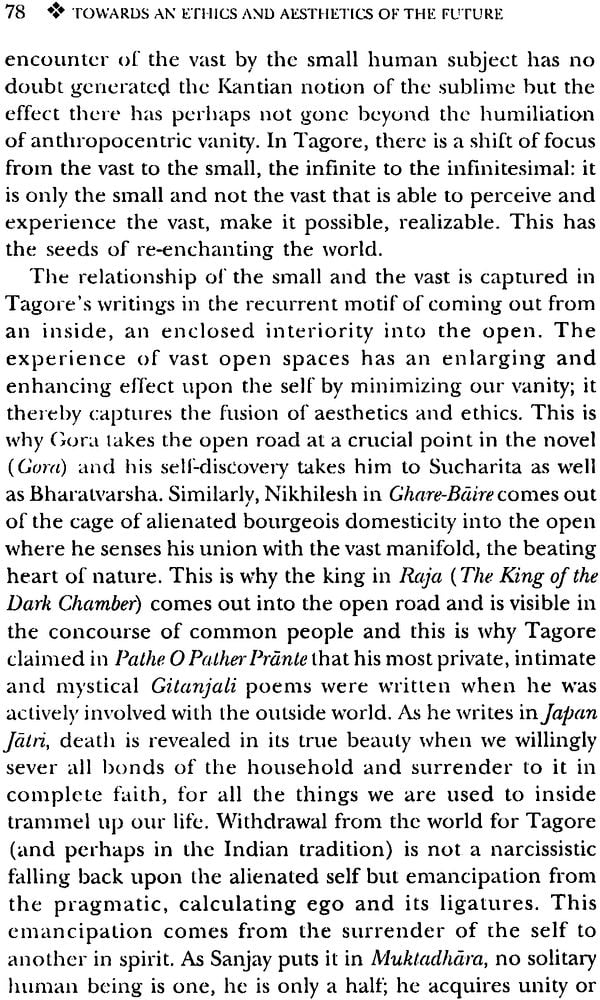 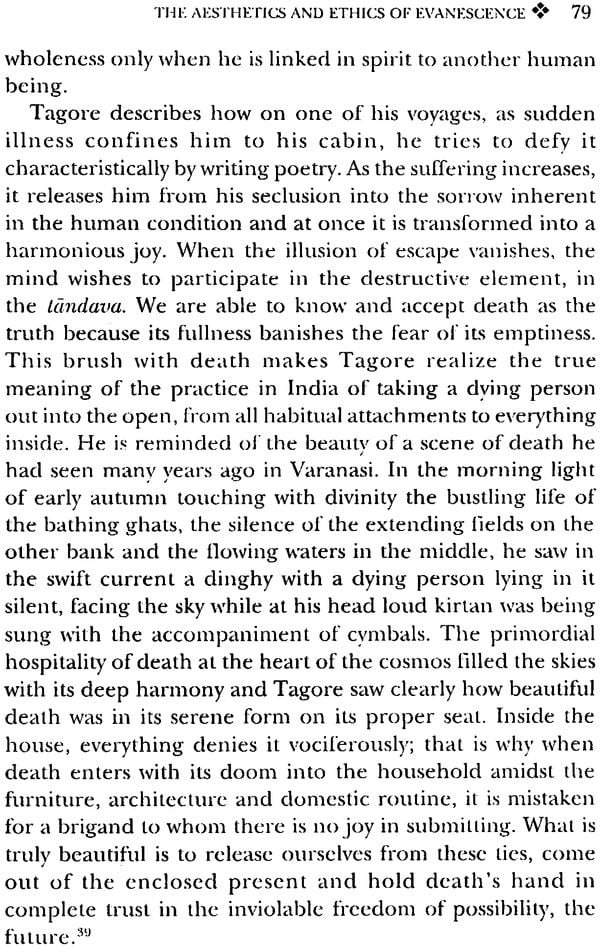 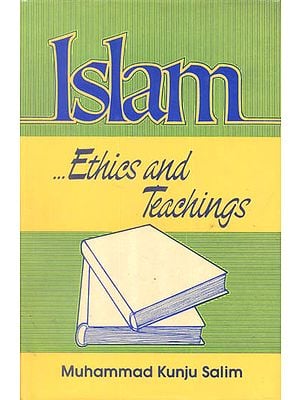 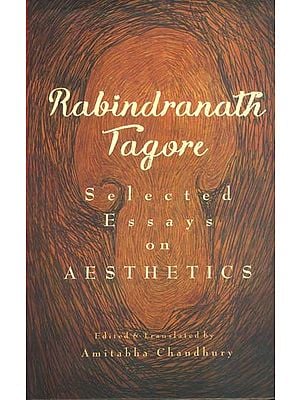 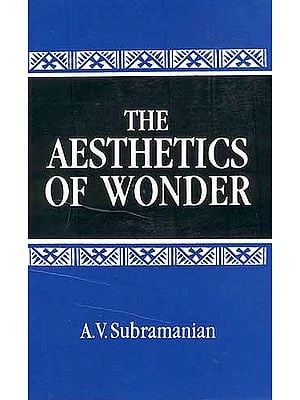 The Aesthetics of Wonder: New Findings in Sanskrit Alankarasastra
By A.V.Subramanian
$29
FREE Delivery 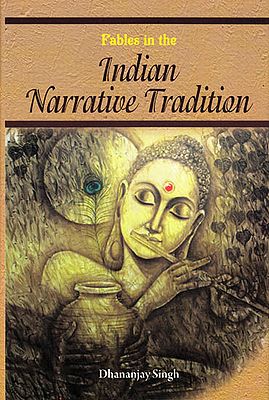