Best Seller
FREE Delivery
$21
Quantity
Ships in 1-3 days
Notify me when this item is available
About the Book:

The temple is the most significant of Indian architecture as it sums up and represents the subtle values of Indian culture. Elaboration of the temple structure followed the firm establishment of image worship and the accompanying development of the ritual, which took time to crystallize. The evolution of different architectural forms in north, south and other parts of India was a later development. This book presents a comprehensive picture of the chronologically uninterrupted chain of extant south Indian temples, explaining the niceties of their architecture, the many subtle variations in style and their evolution over the years.

K.R. Srinivasan (late) worked with the Archaeological Survey of India for over two decades as its Deputy Director General and as Director of school of archaeology, and Director of monuments. His fields of specialisation were temple architecture, sculpture and iconography. Apart from organising the temple survey of India, he conducted systematic surverys of temples in south India and the Deccan. He was for many years chairman, Archaeological Society of south India, Chennai, he was awarded the Padma Bhushan in 1991 for his contribution to the field of archaeology, temple art and epigraphy.

As a religious institution and place of worship, the temple in India has had a hoary past. As a structure that enshrines a god or some other object of veneration, circumambulation (pradakshina), adoration and worship (puja), it has had a varied growth in different parts of the subcontinent. This was according to the local needs and credal requirements and subject, of course, to the interplay or exchange of thoughts and ideas. Though fundamen- tally the basic elements of the temples and the worship in them derived mostly from Vedic and Puranic sources, in course of centuries they assumed different styles and patterns during their diffusion over wide areas from the cradle centres of the great Indian religions in north India. The rise of the protestant cults of Jainism and Buddhism during the pre-Christian epoch and the development of their own versions of the legends, creeds, forms of deities, rituals and the like, resulted in their adaptation of one kind or another of the temple form and its adjuncts as suited the object of their particular worship and its glorification, for essen- tially the temple in its form and layout depended on the object of veneration installed and the method adopted for its worship. The three creeds being indigenous, and not exotic, had not to derive the basic forms of their temples from anywhere except from their own land of origin. All the three, while retaining the common Indian plans and elevations, and the native principles and tech- niques of construction, had, however, to show their credal dis- tinctions by suitable adaptations of their forms and through emphasis on the features of the cognitions of the respective creeds in the general make-up and content of the structure.

The builders or the craftsmen-sthapatis and the silpins-who belonged to the same guilds of artisans, had common principles and set methods of design and construction and they worked in collaboration with the priesthood which knew the rituals, the nature of the object of veneration, and the modes of their wor- ship. They together determined the forms of the temples with such modifications as suited the respective cases, as also the fixation of the features of the principal deities and the decorations of the structure with iconic and other sculptural embellishments. As a result, the Vastu, Silpa and Agama texts and canons as described in the sastras were evolved. All that was known and necessary in the creation of the temple and the conduct of worship therein was codified. Thus to the Indian mind the indigenous architecture remains basically and essentially Indian. It cannot be sub-divided into what is usually attempted to be made out as Hindu, Jain, or Buddhist architecture.

The organized religions, Hinduism, Jainism and Buddhism, did, in their early stages of growth, spread into the southern peninsula across the Vindhyan barrier of mountains and forests, because of their own vitality, in successive waves, merging into the religions of the south which had viable cultures, social patterns, traditions and religious beliefs of their own, not to speak of a language that could flower into its own literature, indepen- dently of every other factor. A greater impetus to these contacts was given by the Mauryan conquests that reached the northern borders of the Mysore plateau, beyond which Asoka, the great patron of Buddhism, recognized viable, stable' and organized kingdoms of the far south, with their own indigenous culture. He treated them as friendly neighbours across the border among whom he could spread his message through his southern admin- istrators.

The tradition of rock-cut architecture and excavation into living rocks of chaityas and viharas of the Buddhists initiated by Asoka near Gaya was soon taken up in the trap-rock regions of the Deccan and western India, reproducing aspects of contempo- rary brick-and-timber originals which, because of the perishable nature of the fabric of their construction, did not survive the march of time. This expression of forms of architecture and sculpture through the permanent medium of stone, adopted earlier by the Buddhists, then by the Hindus and the jains, has enabled the monuments to last for centuries and give us a fairly good idea of what the contemporary religious architecture and sculpture in general was. The- brick-built stupas and chaityas, which are in essence temples, in the eastern Andhra and northern Kamataka regions, too, have survived because of the adoption of stone for their protective casing and sculptured veneer, not to mention the stone railings which totally imitated timberwork in their joinery and fixtures. In these cases stone cannot be said to have gone into actual construction which was still of brick. These stupas and chaituas show their own distinct regional characters as against their compeers in north and north-western India.

From the sixth and seventh centuries AD, the Hindus and jains of the south too adopted the stone medium, and started excavating rock-cut cave-temples, or carving out rock-cut mono- lithic temple forms, and ultimately building them of stone. We have a long series of such stone temples created in close succes- sion and extending uninterruptedly through the past thirteen centuries, surviving in their thousands all over the peninsula, more to the far south where most of them are still in use. The comparative freedom from foreign invasions and disruption in this part of India and the relative strength of the kingdoms and society were some of the contributing factors. Even the early Hindu and Jain temples came into being under the royal patron- age of the rulers of the three great empires of the south-the Chalukyas, the Pallavas and the Pandyas-along with the lesser kingdoms-wedged in between. The spirit was soon caught up by . the nobility, the mercantile corporations and the agricultural trade, and artisan guilds that flourished during those times. The result was that a chain of temples, great and small, studded every village and town of the south, which thus came to be known as the land of temples. The temples were documented by their own expressive and detailed inscriptions, again in their thousands. Temples from the Chola times-(ninth-tenth centuries) became the very hub of the rural and urban life in all its aspects-religious, cultural, social, economic and educational-and thus became the repository of all that was best in fabric, architecture, sculpture and other arts.

Buddhism almost went into complete eclipse soon; the Hindu temples to a greater extent and the Jain ones to a lesser extent predominating. There had been, of course, a natural interchange of ideas and usages among the three during their periods of development and growth in the region on a matrix that was essentially indigenous. The Buddha, for instance, was adopted as the ninth of the ten incarnations of Vishnu in the Hindu pantheon, in place of Krishna, who came to be considered as the whole aspect of Vishnu. This is testified by a Pallava inscription of the seventh centrury AD in one of the early cave-temples at Mahabalipuram. Then again, Buddhist iantric rituals percolated into the Hindu modes of worship. The [ains had by then estab- lished their sangas at Madurai, and even earlier their creed of the Digambara persuasion had centred principally in Sravana Belagola in Mysore with its affiliates and branches-the guchchhas- radiating into Andhra, Karnataka, TamilNadu and Kerala. Hin- duism witnessed a great revival under the Saiva saints (Nayanmars) and the Vaishnava saints (Alvars) who were soon defined and became part and parcel of the pantheon and in the ritual and calendar of festivals. Sankara, the great philosopher and teacher, also reformed the popular Hindu creeds-the Shanmata and the model of the related worship. With such a background the growth of temples and organized temple wor- ship became truly phenomenal.

The southern temples with their characteristic tiered uimana shrines, major and minor, their axial and peripheral mandapa adjuncts, which are flat-roofed halls, and the towering gopura entrances form a distinct class by themselves as against the northern prasada temples with their curvilinear superstructures, the crowning amalaka and mandapas with rising tiered roofs. That the vimana form in its various plans and elevations built of brick and timber had been already developed in the south before the seventh century will be only too evident from the maturity shown by the first monolithic replicas as reproduced in the so-called rathas of Mahabalipuram and the earliest of the stone structural uimanas. The mandapa forms are likewise evident from the cave- temple types, while the gopura in its simplest form is also to be found in the early temple units. They could not have arisen in stone spontaneously.

The prevailing maritime contacts with the regions of the east in the Indian Ocean, which were actuated more by trade and emigration than by motives of political aggrandisement and were, therefore, peaceful and the resultant emigrations of colo- nists, lent much to the contemporary make-up of the religion, culture, art and architecture of these lands. South Indian temple architecture, sculpture and iconography may be said to have had a great share in this. In fact, it may be said that many of the greatest achievements in the fields of religion, art and architec- ture are said to be found in regions beyond the cradle centres of the great religions in south India-as at Thanjavur and Madurai, and in other lands, as in Java and Cambodia.

Thus in an integrated scheme of a study of the temples of India, the southern temples have perforce to be studied indepen- dently in order to understand not only their origin and mode of development through time and space into the varied regional styles, but also the similarities and differences and the mutual influences of the two great traditions, northern and southern. An attempt has been made in the following pages to portray in outline the temples of the south. Since even the simplest architec- tural and art terms of the European classical origin, often em- ployed in the description of Indian temples, are inadequate and not always apt, the barest use of Indian technical terms of common Sanskrit origin for the most important parts, as used in the vastu and Silpa manuals, has been made. The terms most of which are familiar to temple-goers of the south are not only explained in the course of the running description but also collected in a glossary at the end, so that they can eventually be put to a more purposeful use. 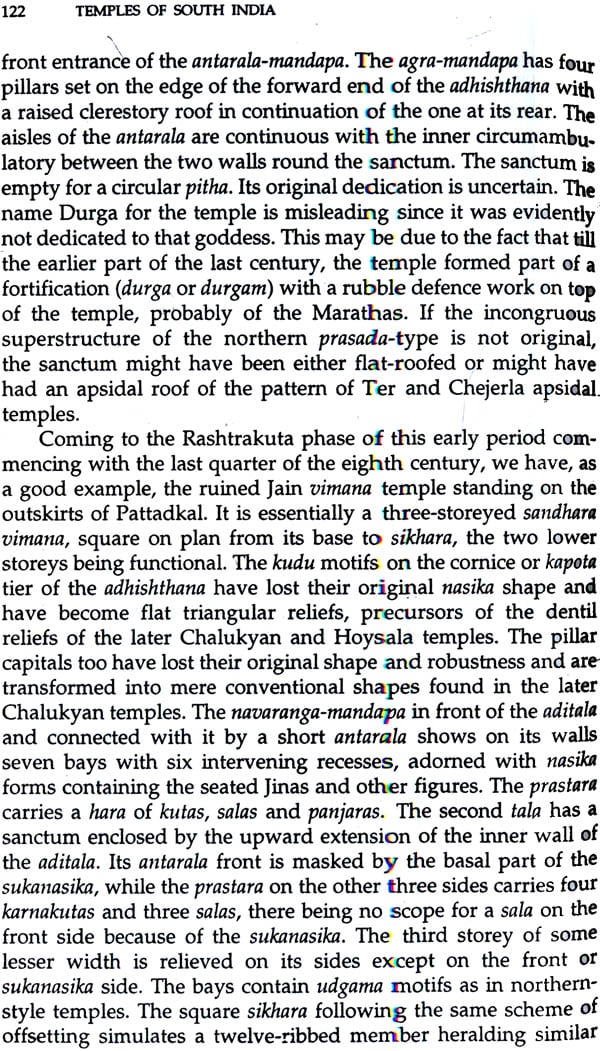 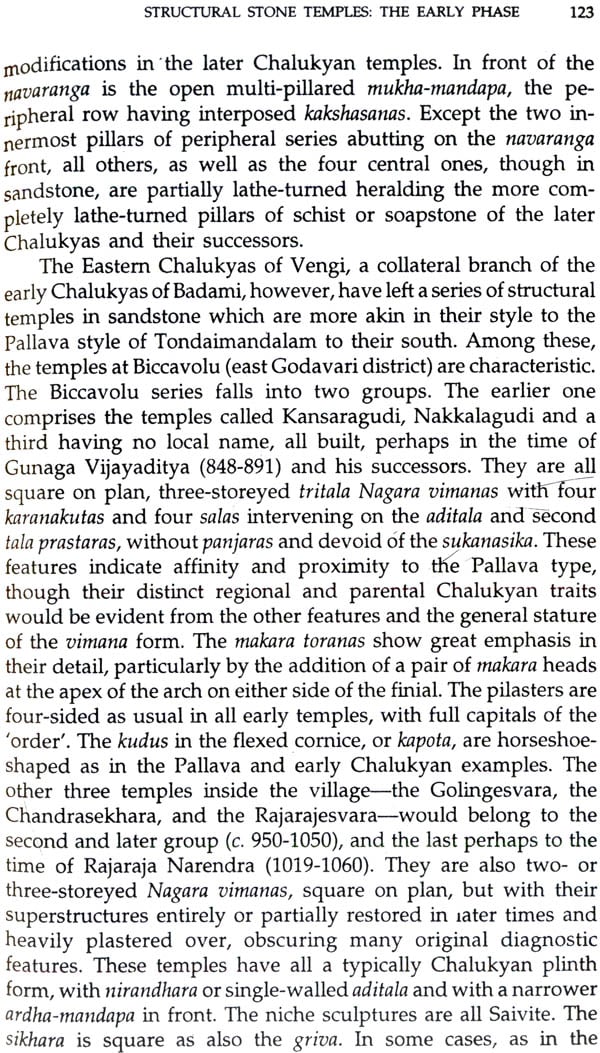 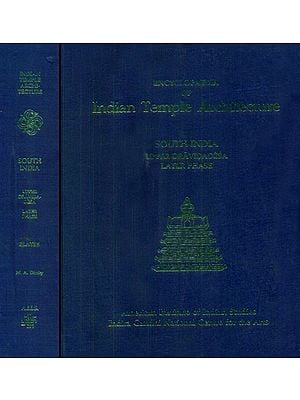 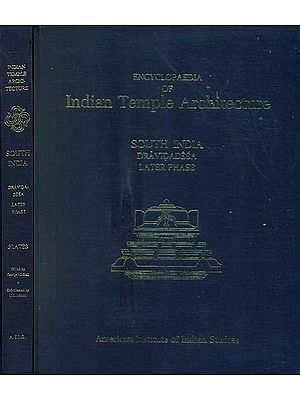 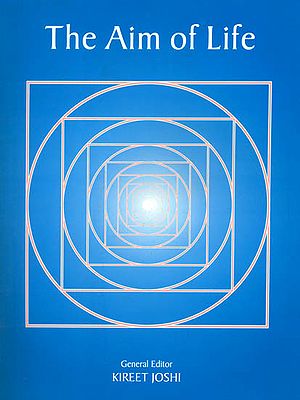 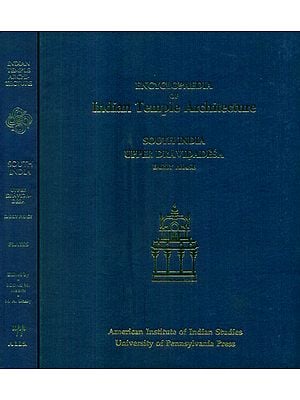 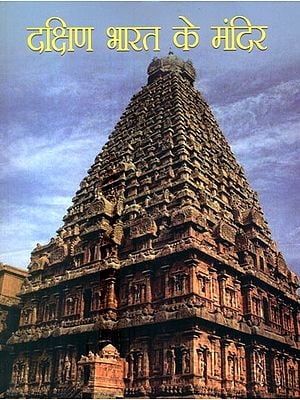 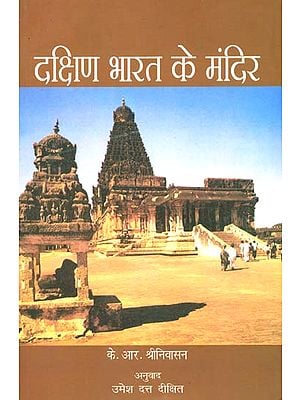