According to traditions going back to pre-Vedic times, Kali sprang from the third eye of the goddess Durga as a destructive and terrifying manifestation of feminine power sent to lay waste to the forces of evil. Throughout India to this day, Kali is worshipped as the destroyer of bondage, capable of liberating her devotee . ? from all rules and subjugation.

In Tantric Kali, Daniel Odier presents the mythology, practices, and rituals of Kali worship in the tantric Kaula tradition within Kashmiri Shaivism. He re- veals the practices of Vamachara, commonly known as the Left-hand Path but more accurately translated -as the Path of Shakti. In this tradition the body itself is Kali’s temple, and it is therefore unnecessary to reject or deny the body to know union with the Divine. Instead, nothing is regarded as pure or impure. and there is complete freedom from rules. Focused on working directly with forbidden emotions and behaviors, this path allows the seeker to transcend? obstacles to liberation through sexual union. According to the Kaula Upanishad, In your behavior do the opposite to what the norms dictate but remain in consciousness.? This is the essence of Tantra. Kali is absolute reality: manifested as A woman intoxicated by desire,-she frees the tantric practitioner from all desire except union with the divine. . The author includes an evocative ritual from the Nirrutara TanIra-never. before published in any Western language-?containing devotions to the 64 - gyoginis according to Matsyendranath, founder of the Kaula path. Offering devotional chants, meditations, and mudras specific to tantric worship of Kali, , this empowering book provides practices and teachings for those on the tantric ? path to liberation.

A teacher of kashmiri tantra, daniel odier met the tantric tradition through the teachings of the late kalou rinpoche in 1968 and remained the rinpoche's disciple until his passing in 1989. He went to kashmir to find the source of the tantric tradition and received a mystical initiation from the tantric yogini lalita devi. devi introduced him to the kaula tradition of kashmiri shaivism and initiated him to the spanda and prathybijna lineages. He has been her disciple since 1975. his sadhana is described in his book tantric quest: an encounter with absolute love. in 2004, odier also received the ch'an ordination in the lin t'si and caodong schools in china as well as permission to teach the zhao zhou ch'an lineage in the west.

odier has taught literature at the university of california and eastern religions at the university of Tulsa. he is the 119 author of many books, including desire: the tantric path to awakening, yoga spandakarika: the sacred texts at the heart of tantra, and (under the nom de plume Delacorta) the novel diva, which was made into an internationally acclaimed movie of the same name that has become a cult classic. daniel gives workshops transmitting the kali practices in europe, canada, south america, and the united states. he lives in switzerland.

Tantric Kali provides depth as we are guided through mythology, ritual, visualization, and life teachings to have a direct experience of Shakti from the wisdom teachings of the Kaula path. Daniel offers another treasure from the heart of his realization-steeped in his lineage with translations of the oldest ritual to Kali- songs and hymns and truly transformative practices and meditations direct from the root. A full-spectrum offering, this is the birth of another Odier classic. Daniel is one of the extraordinary and skillful practitioner- teacher-scholar-writers of our time. Tantric Kali is juicy, liberating, radical, and exquisite and offers a unique compendium of tantric Kali sadhana accessible to all.

A certain number of practices that I received directly from my teacher Lalita Devi are not part of any treatises that I am aware of. I received my knowledge of the rituals and secret practices from her. Concerning the rituals of Kali, I also benefited from the magnificent presence of Shri Maa, a yogini disciple of Ramakrishna, who lives in the Napa Valley in California and who is a great admirer of Kali.' I never practice the ritual without donning the rudraksha (seed of Shiva) necklace that she gave me.

The mention of Kali evokes a shadowy world cloaked in mystery, for this Indian goddess emerged from humanity's ancient past. Although she has been worshipped for centuries, most of the treasures of her mythology and practices still remain virtually hidden in Sanskrit texts and esoteric sects. But Kali has many gifts for us.

I am Great Nature, consciousness, happiness, the quintessential," says- Kali in the Chudamani Tantra. She is the Cosmic Mother, dark as storm clouds, naked with wild hair falling to her knees. She comes to us from a rich past devoted to the worship of feminine power-a veneration of the Great Mother that was universal before the advent of religions. The civilization of the Indus Valley is where we find the seeds of the great ideas that were to form the movement that revered the Great Goddess. Terra-cotta statues of her can still be found, dating back 4,500 or 5,000 years. Paleolithic sites represent the Goddess in the form of triangular stelae or rounded rocks, some of which are still worshipped in India.

Kali sprang forth from pre-Vedic (before 1500 BCE) rural traditions that were wild and shamanic before migrating slowly into Indian tradition. She was perhaps the ancient goddess worshipped by the inhabitants of the Vindhya mountain range, which separates north from south in the center of India.

According to Sir John Woodroffe (Arthur Avalon), writing in the Garland of Letters, "Kali is the deity in that aspect in which It withdraws all things which it had created into Itself Kali is so called because She devours Kala (Time) and then resumes Her own dark formlessness."! He quotes the Mahanirvana Tantra as follows:

At the dissolution of things it is Kala (Time) who will devour all and by reason of this He is called Mahakala and since Thou devourest Mahakala Himself It is Thou who art called the Supreme Primordial Kalika .... Resuming after Dissolution Thine own nature dark and formless, Thou alone remainest as One, Ineffable, and Inconceivable.

Kali speaks to us of the darker aspects of nature and our own human nature, yet she also speaks to us of love, for she became the consort of Shiva, adopted by tantric" practitioners of the Kaula path. Kaula is the vamachara path, often called "the left-hand path," but because vama also means "woman," it would be more accurate and in harmony with the Kaula path to translate vamachara as "the Shakti path.

In the realm of Tantra, "the central theme is the divine energy and creative power (Shakti) that is represented by the feminine aspect of any of various gods; personified as a deoi, or goddess, she is portrayed as his wife, above all as the wife of Shiva."" The tantric texts usually take the form of a dialogue between Shiva and Shakti. Kali, or Kalika, is one of the many forms of Shakti, whose name and form parallel that of the particular aspect the god takes, such as Kala and Kali, Bhairava and Bhairavi.

The world of Kali is huge. It would be presumptuous to think that I could treat the whole of it, but I did want to bring together in one book the essentials of the mythology, rituals, and practices as well as the mystical worldview that they represent. Here you will find several texts that are being published in English for the first time.

Chapter 1 explores Kali's origins and symbolism, which will make it clear from the outset that she will be our guide to territory of the human psychophysical being that is usually scorned or forbidden in religion.

In chapter 2 the Kaula path and its spread across India is described in greater detail, with glimpses into the fecund field of Kali mythology, as well as an introduction to the thirty-six principles of reality (tattvas). This chapter includes In Indian mythology each god or goddess takes many forms and is known translations of the Kaula Upanishad and the Kularnava Tantra, which makes it clear that the value system of the Kaula tradition is very nonconformist.

Kali, however, is still able to speak to us, primarily through practices we enliven within our own beings. Chapter 3 introduces preliminary practices that are essential preparations for entering into Kali's profound rituals of transformation. Chapter 4 contains the first publication of an English translation of the Nirrutara Tantra, the oldest presentation of the Kali ritual.

The Kali ritual is presented in detail in chapter S, culminating in the ritual of Sacred Union. Practices and visualizations to guide the aspirant along the Kaula path are given in chapter 6, including a focus on the eight chakras and sixty-four yoginis, the Yogini's Practice of the Heart, and the Devouring of Inner Demons.

In addition to inspiring the composition of many tantric scriptures, Kali has also evoked devotion in the form of hymns and songs, several of which are presented in chapter 7. Civilization has brought us many marvelous things, but it has also cut us off from our ancient roots and from our connection to nature, to animals, and to the cosmos. The arrival of religions has added all sorts of regulations and rules, which have repressed our fundamental connections with the world. We have become frightened, conformist, moralizing, guilty, and terrified by these impulses that violently surge up in us, sometimes in sexuality and sometimes in confrontations. They can astonish us and shock us. 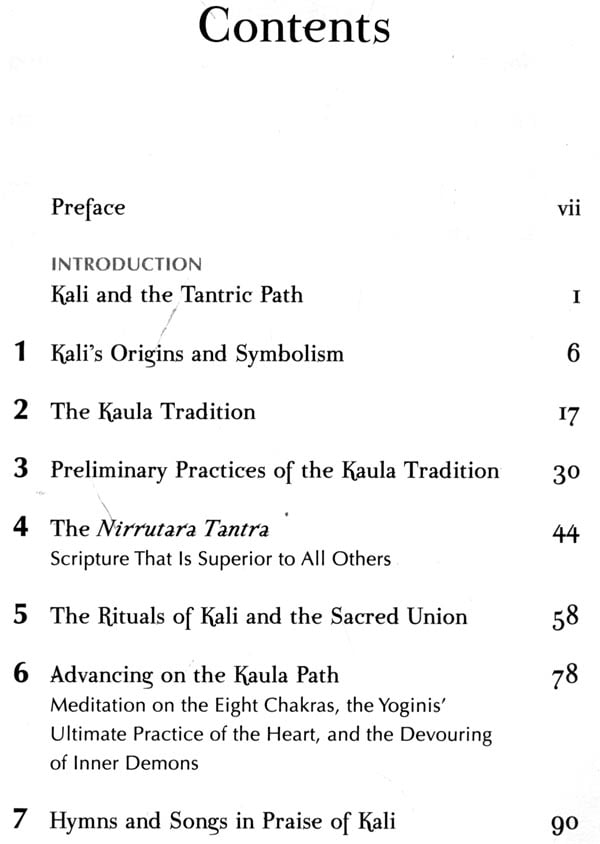 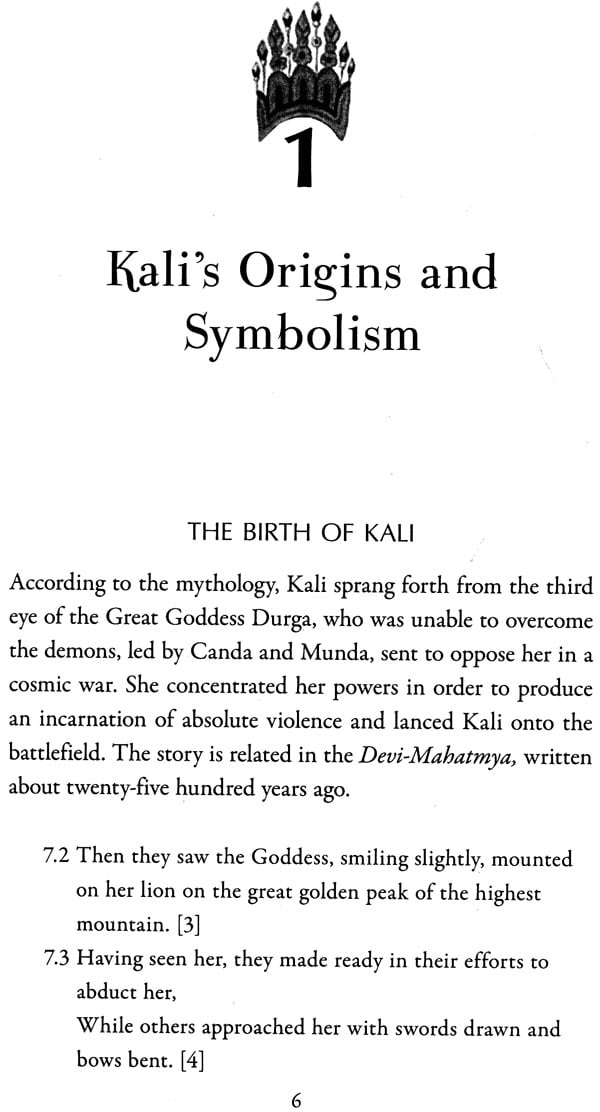 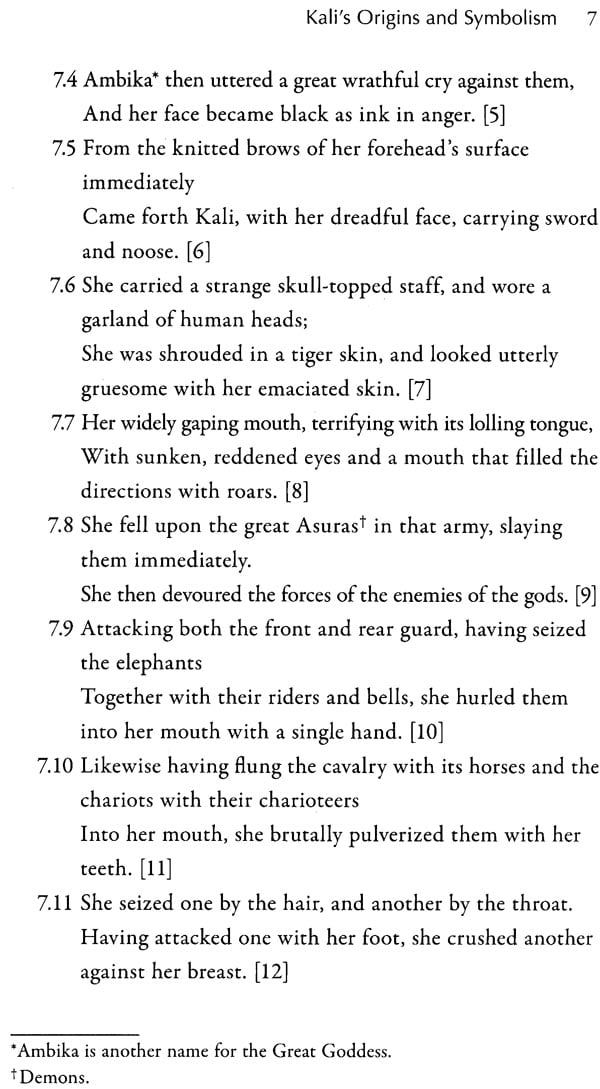 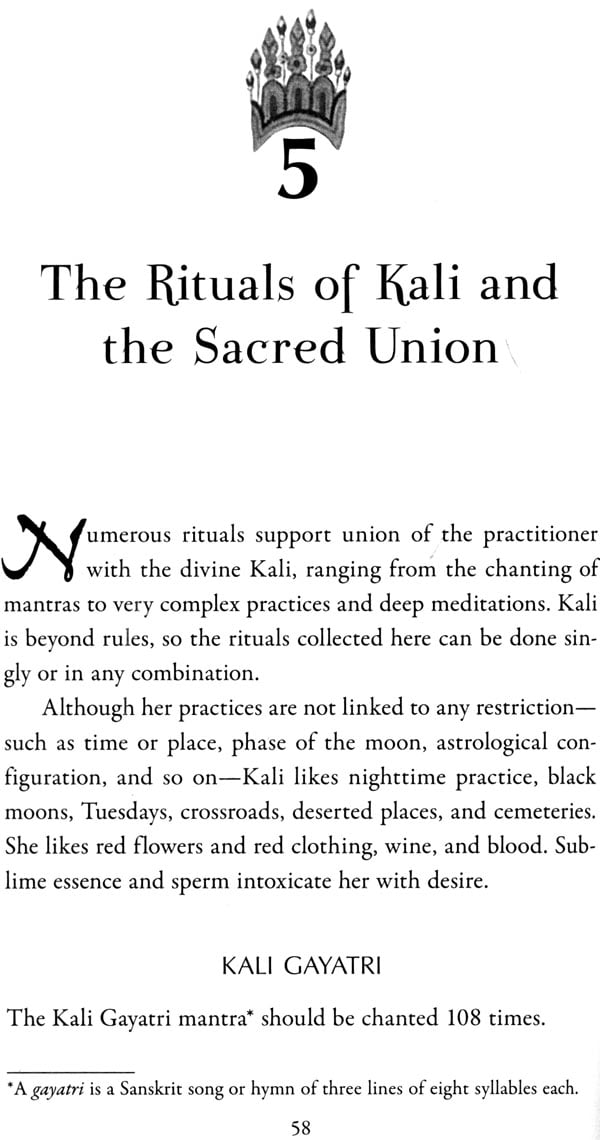 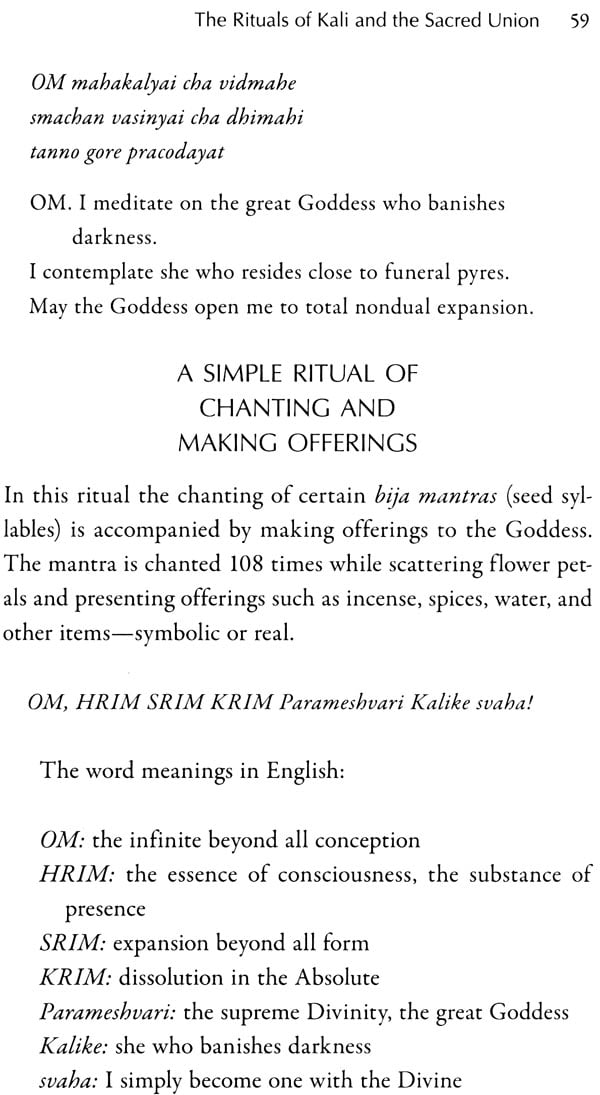 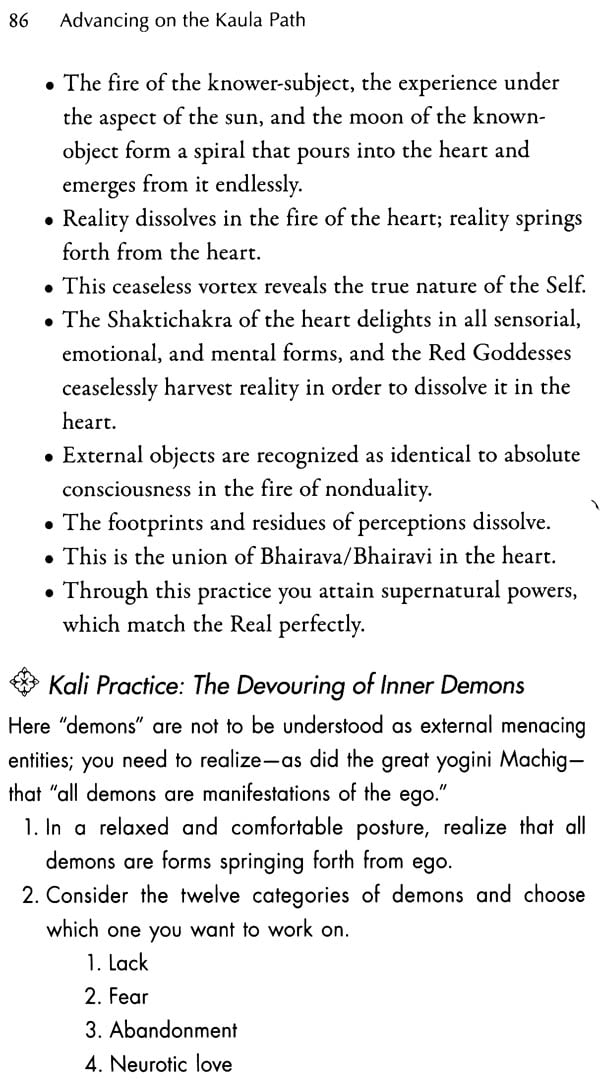 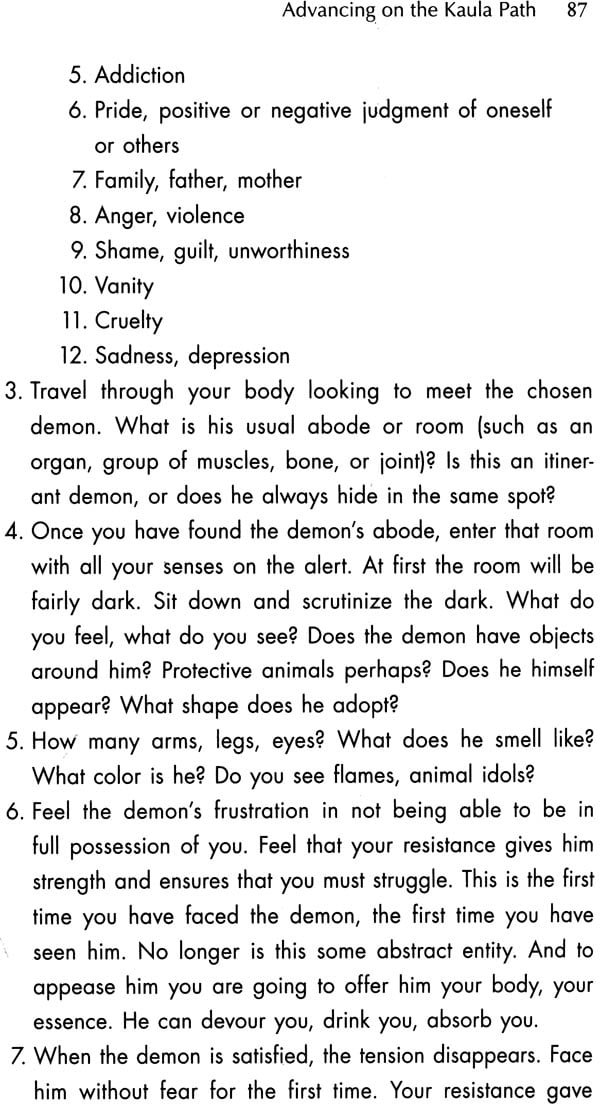