FREE Delivery
$21.50
Quantity
Usually ships in 15 days
Notify me when this item is available

This book is centred around an engaging and lively conversation on the Hindi/Urdu film song between the renowned poet and lyricist, Javed Akhtar and documentary film director and author Nasreen Munni Kabir.

One of the first on the subject, the book also includes a selection of sixty songs written by Javed Akhtar for the many hugely successful films to which he has contributed. Theses songs are a reminder of the excellence of his work and for those unfamiliar with Hindi/Urdu, English translation are also provided.

It is an established fact that the Indian film song enjoys an enormous impact, and has always been a vital part of the national culture. For the reader, it is a rare privilege to discover the thinking that went behind a song that can be heard in a billion homes. This book will interest and appeal to Hindi film and music buffs both within India and outside.

Javed Akhtar is a nationally renowned poet, lyricist, and celebrated screenplay writer. He has co-written the classic films of the 1970/80s including Zanjeer, Deewar, Sholay, Trishul, and Shakti. Javed Akhtar has won the coveted Filmfare Award thirteen times - six of these awards were for Best Lyrics and seven for Best Screenplay. Akhtar has also won several other awards for his song-writing including five National Awards for Best Lyricist starting in 1996 (for the film Saaz), 1997 (Border), 1998 (Godmother), 2002 (Lagaan), and 2003 (Refugee). Javed Akhtar's first collection of Urdu poetry, Tarkash, was published in 1995 and has been translated into several languages. He is also involved with many social groups working for secularism, women's empowerment, and social justice.

Nasreen Munni Kabir lives and works in London as an independent producer/director and programmes the 20-part annual Indian film season for Channel 4 Television, UK. She has made over 50 documentaries on the Hindi cinema from In Search of Guru Dutt in 1989, to her latest two-part production, The Inner and Outer World of Shah Rukh Khan (2004/05). Nasreen Munni Kabir has written several books on Hindi cinema, including Guru Dutt: A Life in Cinema and Talking Films: Conversations on Hindi Cinema with Javed Akhtar. She is currently serving a second term as a governor on the board of the British Film Institute.

Shah Rukh Khan
'Javed Akhtar has contributed to India cinema more than many who claim to do so. He has also contributed hugely to my success because of the songs that he's written for me, and the thoughts that we've shared. I miss not having worked with an actor like Sanjeev Kumar or Balraj Sahni or Madhubala. I miss not being around when Raj Kapoor or K. Asif or Guru Dutt walked in the studio. But I must say that I am blessed to have worked with Javed Akhtar.'

A.R. Rahman
'As a lyricist, I believe Javed Akhtar uses the song perfectly in the narrative. He has a vast vocabulary and yet a discreet use of words. He is a fantastic conversationalist and hugely adept at expressing himself. When recording a song, he'll know immediately which words are working and which words need changing. Take for example, his song Chanda re Chanda, it's so simple and yet so sweet.'

Asha Bhonsle
'We have had many great lyricists in the past like Sahir, Shakeel Badayuni, Majrooh Sultanpuri and I never thought that in recent times we'd have a great lyricist like Javed Akhtar.'

'How can the modern and the traditional reside so comfortably in the same person? The songs of Dil Chahta Hai are trendy, youthful and urban whereas the songs in Laqaan are earthy, folksy and rural. Who can believe that both have been written by the same person?' exclaimed my motherl as she was channel-surfing one lazy afternoon at home. 'Javed has such an amazing command over the language because he is at once both the city person and the small- town boy,' she stated, summarizing him adeptly.

I looked up from my cup of tea at the array of trophies lined up haphazardly on the top shelf of the bookcase in Javed's study. Thirteen Filmfare awards, five National Awards and countless others. Yet fame and recognition rest lightly on his shoulders. As I watch him, bent over his papers, penning yet another song, I realize that for somebody who has achieved so much, Javed doesn't hold himself precious at all.

He doesn't even have a proper desk (a temporary roll-on food table that I had once bought when my father was hospitalized still serves as his desk). He is not fussy about the pen he uses -an ordinary ballpoint or even a pencil stub suffices. The only thing he insists upon is a particular kind of unlined cheap fullscape double sheet to write on. I have often tried, without success, to replace it with Simple bond paper. But he will not change it. Neither will he use one of the several hundred fountain pens he has been gifted. When I suggest he does, he shrugs it off with 'What's the point? I will lose it and then feel miserable!'

How different he is from my father Kaifi Azmi would only write at his desk-a deep mahogany writing table, and would only use a Mont Blanc pen with blue-black ink. One thing though, that Javed has in common with my father, is the family's complete access to him while he writes. All my life I had barged into Abba's room, oblivious to the demands of creativity and asked him for trivial things without ever being reprimanded. With Javed, I've become even bolder. I can interrupt him during the smallest break he takes from work, to solicit his help-in extricating me from a problem-whether it has to do with slum-dwellers or a paragraph I am finding hard to complete.

The only time he protests is when I attempt to tidy up his room. His papers lie scattered allover his study-under the table, on the sofas, between hundreds of cassettes. Each time I try to bring some order into this chaos, he thunders, 'Have mercy, Shabana , leave my papers alone. You have the whole house to clean to your heart's content, why can't you let this little room stay the way I want it?' Chastened temporarily, I leave the room hastily. Only to sneak right back in, when he is not at home, to open the windows and allow some fresh air in ....

Typical wife. But an untypical partner, I think. Because although I might take Javed for granted as a husband, I continue to be overwhelmed by his work as a writer, poet, and lyricist.

The thing that strikes me most about Javed is his ability to communicate the most complex of ideas in the Simplest words. This has stood him in great stead as a Hindi film lyricist. He can be philosophical without being pedantic, breezy without being trivial, sensitive without being sentimental. Words come easily to him. He can write a song in the car, on the way to the recording studio. He can sneak away into his study in the middle of a party and emerge from his room with a freshly written song even before people can notice his absence. I often remark that if people knew how seemingly little effort he makes to write a song, they would never pay him! And yet, he never takes his work for granted. When faced with a challenge, he sweats through the night and is up before the sun rises.

During the shooting of Swades, Ashutosh Gowariker once presented him with A.R. Rahman's tune at six in the evening and asked for a Ram Leela song to be recorded the next morning. And this was in a hotel room in Mahabaleshwar. There were no books for reference, no time for research. Javed could only draw from his own reserves; some Ram Leelas watched in Lucknow during childhood, some folk songs remembered from the distant past. The tension was so acute, he promptly went off to sleep! But before the first rays of dawn could light up the sky, he was up and about like a man possessed. The result is the remarkable

This is a book on the observations of the poet, screenplay writer and lyricist Javed Akhtar, as he shares his thoughts and feelings on the Indian film song-which is undoubtedly the most significant and vibrant aspect of Indian cinema. Javed Akhtar was born into a family of poets and his passion for poetry was only rivalled by his passion for cinema. His extraordinary contribution to this hugely influential art form, whether through his screenplays, or through the many wonderful lyrics that he has written, is impossible to measure.

Having had the privilege of spending much time with him discussing cinema over the years, which resulted in a book, Talking Films: Conversations on Hindi Cinema with Javed Akhtar, published in 1999 by OUP India-it was a personal delight to be back again in the company of an analytical mind, a sharp intelligence and a tremendous sense of humour. Through our renewed conversation, Javed Akhtar-with his usual brilliance and fresh insights-turns our attention to what makes the Hindi/Urdu film song such a distinctive expression of thought and emotion for so many millions. In addition to hearing his thoughts on film lyrics and lyricists, it was a privilege to discuss the craft, intuition and emotion that informs Javed Akhtar's own song writing.

The idea underlying this book is whether or not it is possible to understand the process of how a creative mind works. Sitting in his study, with the phone ringing incessantly, Javed Akhtar plucks from his imagination words that some months later define for us the intensity of new love or describe the perils of war. His countless songs have entered our psyche, sometimes mirroring, sometimes defining for us a realm of feelings. Javed Akhtar's evident skills shine through the sixty songs that feature in this book. The selection of his songs is not based on any 'all-time favourite list', but is intended to show his great range and ease in expressing direct, complex or hard-hitting emotions. The translations of the songs are not aimed at matching rhyme, but are intended to provide a guide and atmosphere to the world of lyrics that Javed Akhtar so skilfully paints through his words. 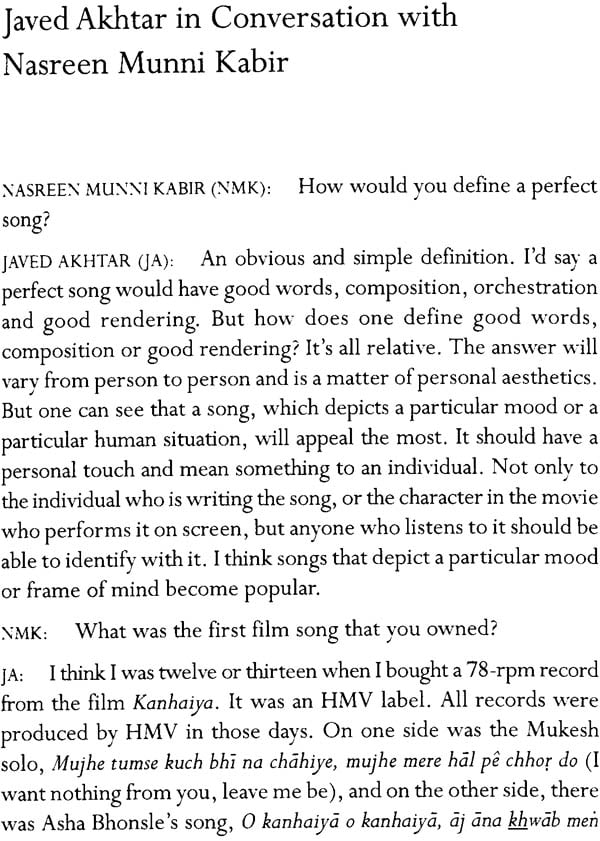 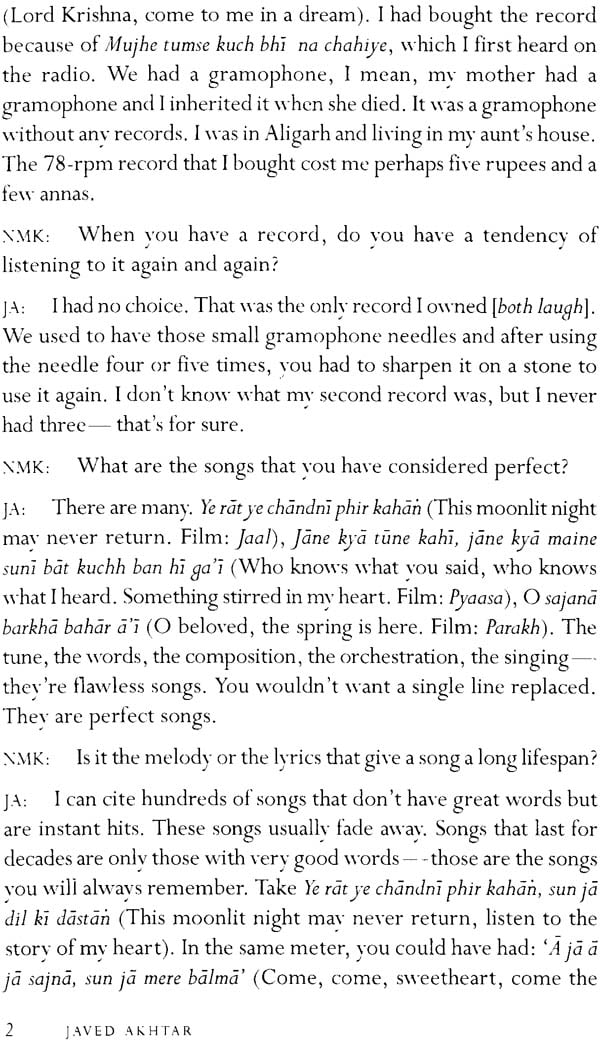 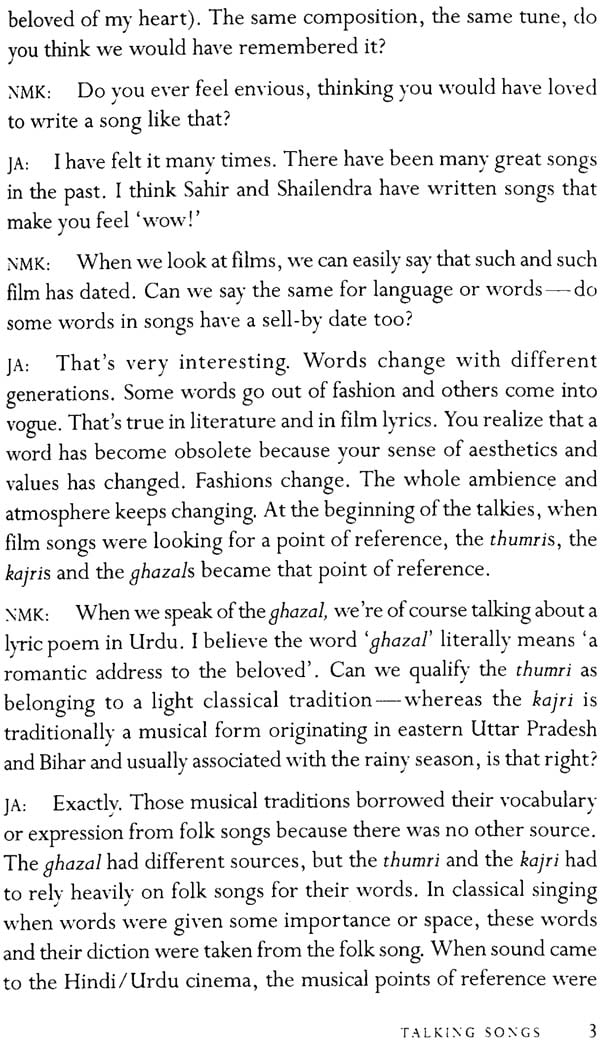 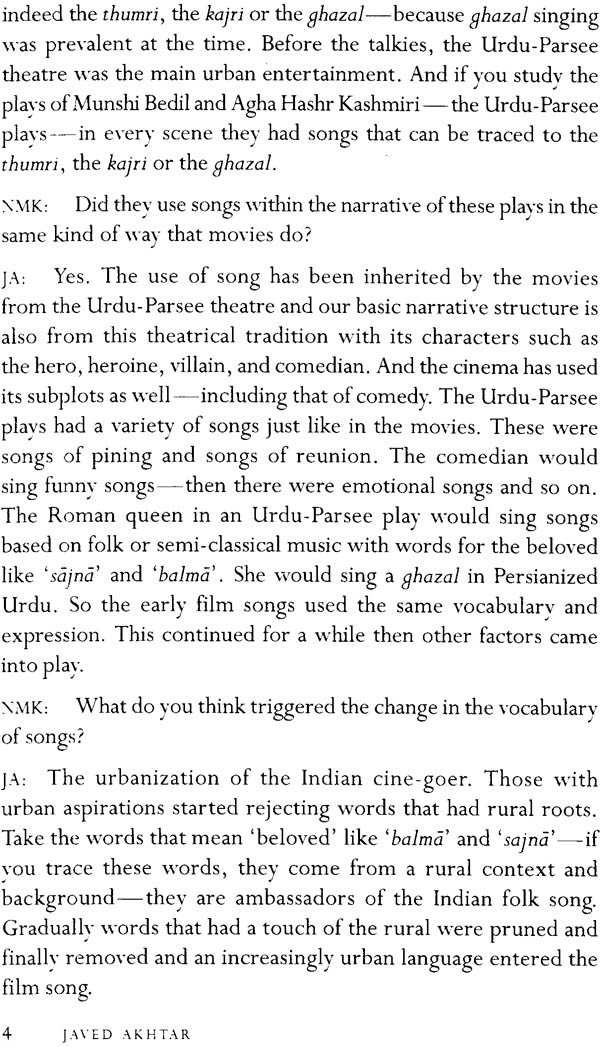 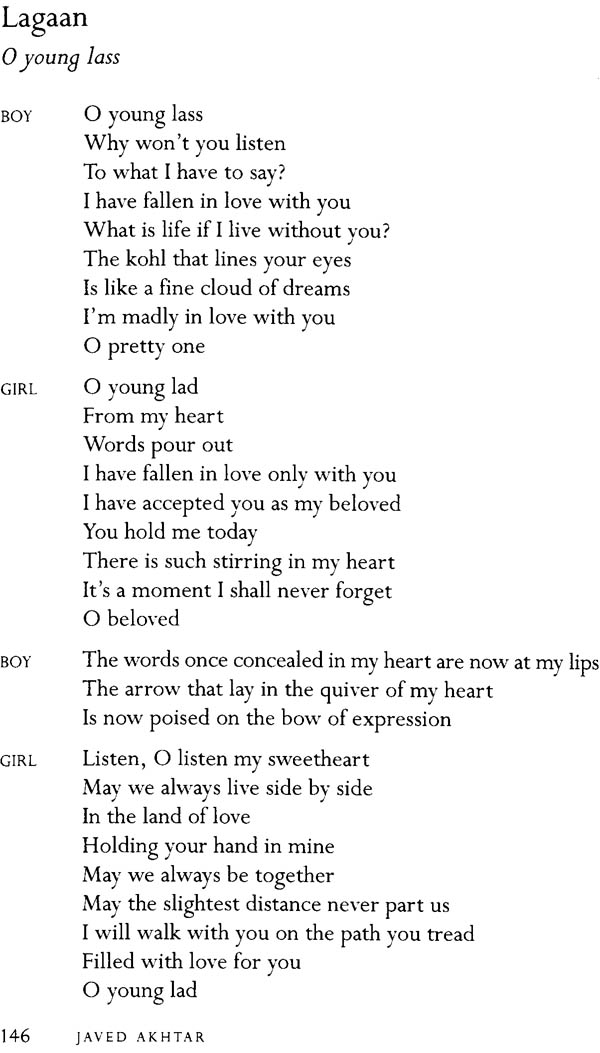 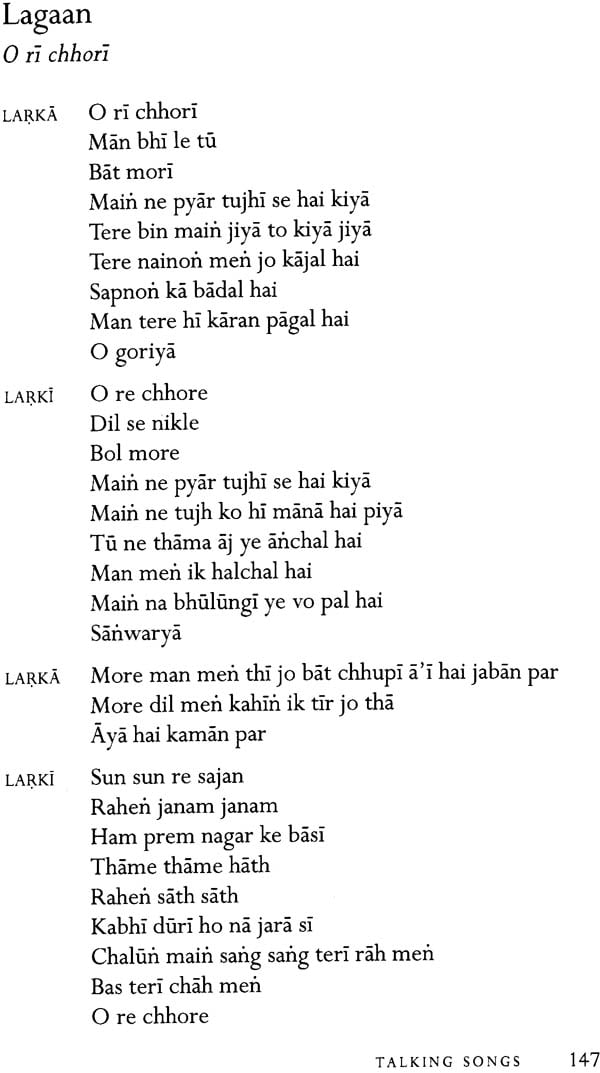 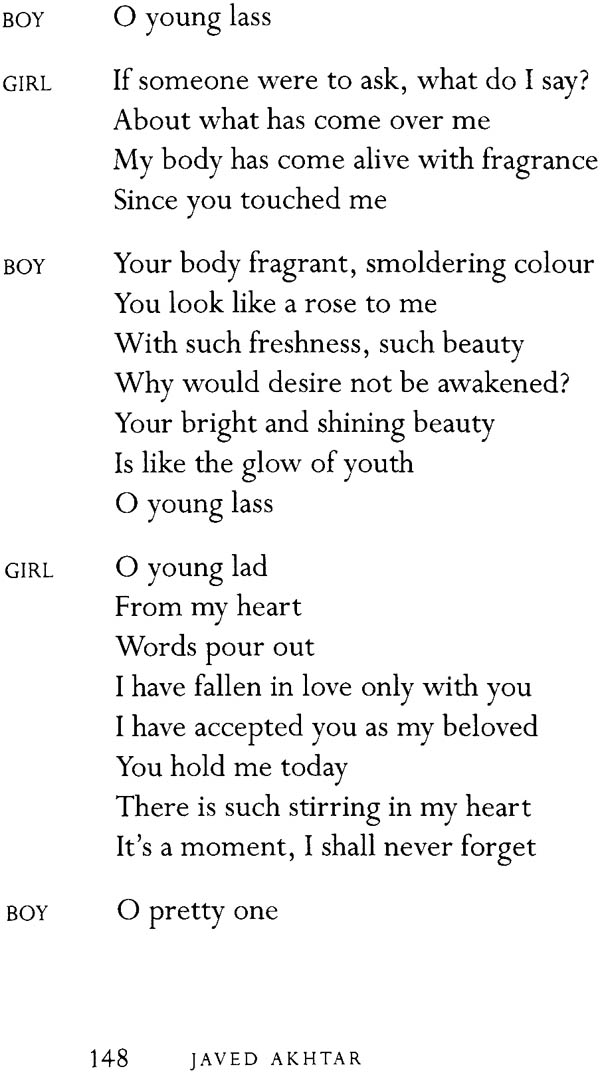 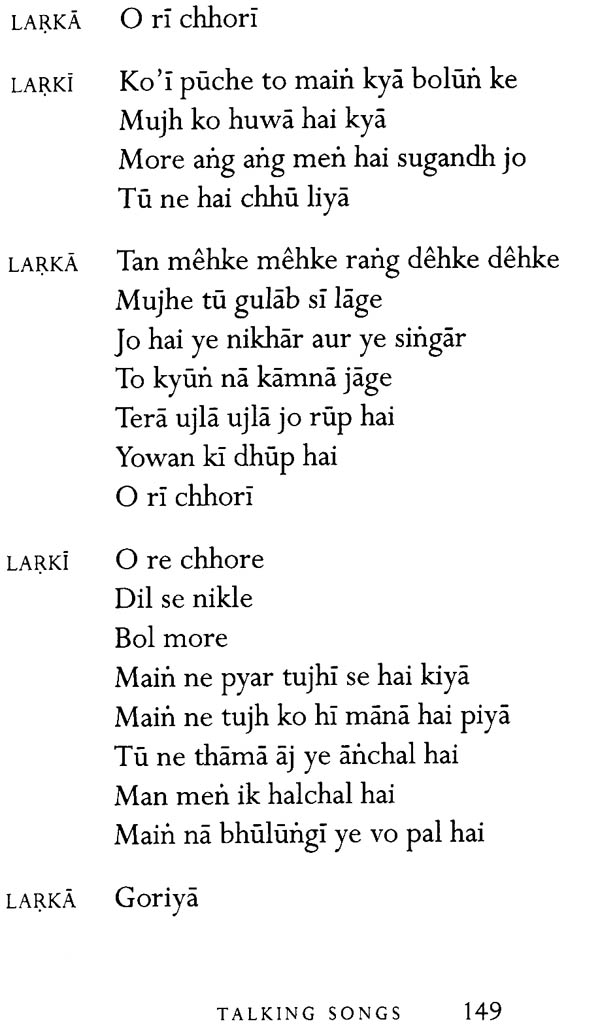 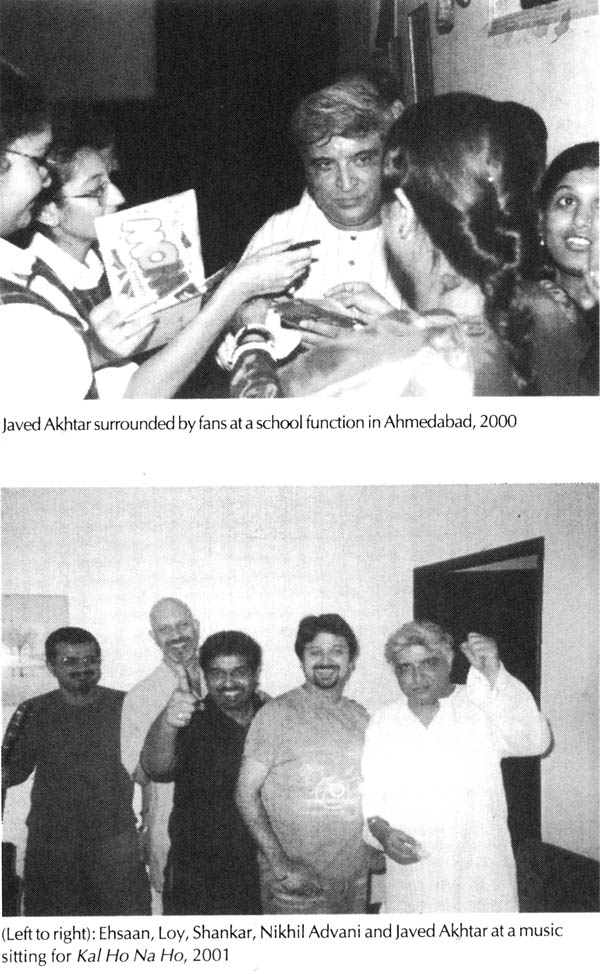 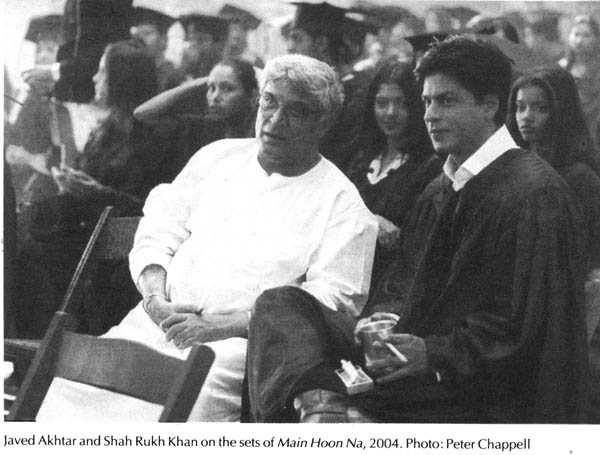 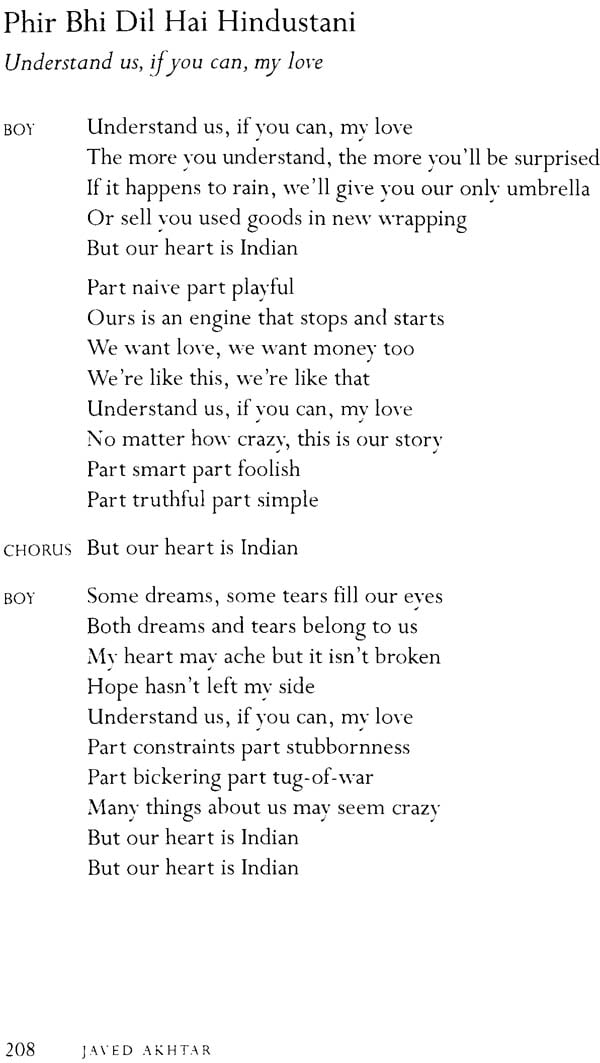 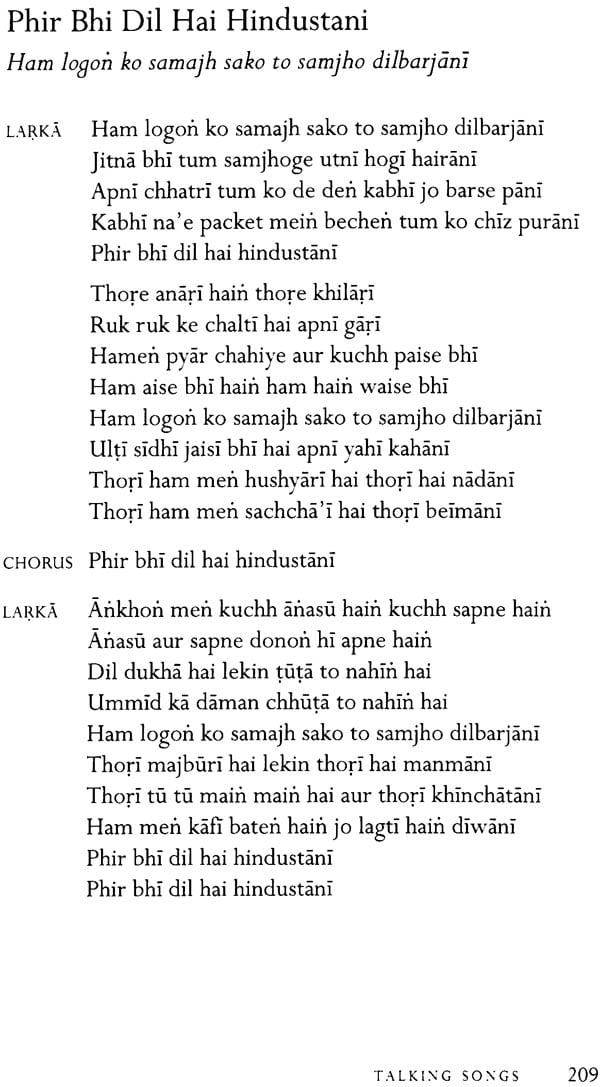 The Making of Don
By Krishna Gopalan
$22
FREE Delivery