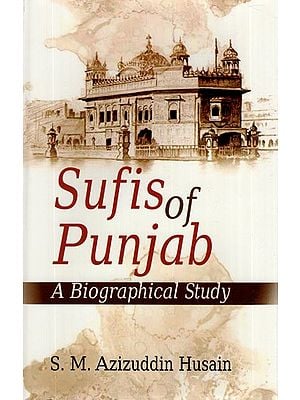 Sufis of Punjab- A Biographical Study

Biographies of Sufis of Punjab from 12th to 19th century. It covers a span of six hundred years. Sufi movement in Punjab starts from 12th century. Shaikh Ali Hujveri wrote Kashful Mahjub, third important source on Sufism in Lahore, Punjab. Large number of Tazkiras of Sufis were written by ulema and mashaikh in Persian and Urdu. This volume covers the biographies of Sufis of Punjab in English language. Scholars and students who are not able to consult Tazkiras of Sufis in Persian and Urdu language, will be able to consult the biographies of the Sufis in English language.

S.M. Azizuddin Husain is a well known medieval historian. He served as, Head Department of History, Dean, Faculty of Humanities and Languages, Hony. Director, Dr. Zakir Husain Archives, Director, Prem Chand Archives and Literary Centre and Coordinator, Jamia Cultural committee, Jamia Millia Islamia, New Delhi. He has also served at Raza Library, Ministry of Culture, Government of India as its Director A.M.U., Aligarh, has honoured him as "Sir Syed Fellow". Indian Council of Historical Research, Ministry of Education, Government of India, has awarded "Senior Academic Fellowship" to him to work on Biographies of Sufis of India.

He has penned twenty-eight books and has also brought out sixty-one publications during his tenure at Raza Library. He has to his credit one hundred eighteen published articles and has presented two hundred thirty articles in National and International seminars.

He has supervised seventeen Ph.D. and ten M.Phil Scholars and has organized twenty National and International Seminars as well.

Sufis came to India during 12th century AD and divided whole north India into their vilayats and worked for the promotion of learning and communal harmony. In the north Punjab and Kashmir was the entry point for sufis. But they also worked upto Kerala. They worked in Kashmir, Punjab, Rajasthan, Gujarat, Bengal, Assam, Bihar, Carnatic, Tamil Nadu, Maharashtra, Malwa, Deccan and Kerala.

Punjab and Kashmir was the entry point of Sufis coming from Central Asia and Iran. Earlier they settled down in Multan and Lahore. Sufis played a dynamic role for the promotion of learning and communal harmony in India, since 12th century A.D. Allama Iqbal pays tribute to Shaikh Saiyad Ali Hujveri well known as Data Ganj Bakhsh:

One bomb blast had taken place at the dargah of Data Ganj Bakhsh in Lahore in 2010. At that time, I was Dean, Faculty of Humanities and Languages, Jamia Millia Islamia, New Delhi. I decided to organize an International Seminar on Shaikh Ali Hujveri in reply to the terrorists attack on his dargah. I organized this seminar to commemorate his 1000th death anniversary who worked for the promotion of learning and communal harmony in Punjab. Shaikh Fariduddin Ganj-i-Shakar had taken lead from him. Sufis loved Punjab and Punjabi language. That is why, we see that Shaikh Farid's verses were included in the Guru Granth Sahab. Maulvi Ahmed Yar Muralvi (D.1854) did poetic Persian translation of some parts of Guru Granth Sahab. We see that when Islam completed 1000 years so to commemorate that Akbar assigned the task of writing of Tarikh-i-Alfi to some scholars. I asked Prof. K.K. Kaushik of Department of Hindi to contribute a paper in this seminar. He was living in Punjabi Bagh, Delhi. One day he met me and told me that he is having Baba Gurjeet Singh his neighbour, who is interested in attending the inaugural session of this seminar. I told him that he is most welcome. Baba told me that he is having two photoframes of the grave of Data Ganj Bakhsh. He will present it to the Vice-Chancellor and to me. After giving these two photographs I requested him to say something.

In his speech Baba told us that he belonged to Lahore and after recitation of Guru Granth Sahib in the morning he used to go to Data's Darbar and pray there. When in 1947, he shifted from Lahore to Delhi, so after reciting Guru Granth Sahab, he prays infront of this photo of Data's grave. So this was the devotion of Punjabis for the dargah of Data, not only in Lahore but even when he left his house his home town Lahore in the hard pressed condition of 1947 but even after a great loss he is still having sentimental and spiritual relationship with this sufi of Lahore in Delhi. This is an example of the contribution of Sufis. Partition of India resulted in blood shed and hatred because people lost their house and home land. In India they were called as Sharnarthis and in Pakistan as Mahajirs but they had no feeling of hatred for the Sufis and their dargahs. He gave one frame to me and another frame to Mr. Najib Jang, former Vice-Chancellor of Jamia Millia Islamia, New Delhi.

Whatever, I am today and doing whatever is just due to my teacher Professor Saiyad Nurul Hasan, former Chairman, Department of History, AMU, Aligarh and former Minister of Education, Government of India, and the founder of Indian Council of Historical Research, New Delhi. Before my retirement in December, 2017, I decided to work on Biographies of Sufis of India. I am highly grateful to Indian Council of Historical Research for giving me Senior Academic Fellowship to work on this project. It is not possible to cover this work in one book so I have divided it into volumes. This is the first volume on - Sufis of Punjab: A Biographical Study (12th to 18th century AD). Punjab means the region watered by five rivers.

I am highly grateful to Dr. Umaima, Incharge, Manuscript Section, Zakir Husain Library, Jamia Millia Islamia, New Delhi, Dr. T.S. Asghar, whome I call Dr. Ata Khursheed, Assistant Librarian, M.A. Library, AMU, Aligarh, helped me so much that I do not have words to thank him. Prof. M.A. Alavi was a source of inspiration for me. Prof. Jigar Muhammed, Dr. Faizan Ahmed and Dr. Farid Ahmad gave me all support. I am grateful to Prof. Farhat Nasreen, Prof. Vibha Sharma and Ms. Snighda Roy for reading the first draft of my book and giving valuable suggestions. I am highly grateful to Dr. Mohd Qamar Alam who has kindly agreed to type Persian verses. Really it is a great favour because he saved me from proof reading. I thank Mr. S.M. Mohsin Jafari, Incharge, Manuscript Section of M.A. Library for extending all the help to me. I thank Dr. Md. Noshad Ali and Dr. Vinod Kumar for their kind support. I am highly grateful to Mr. Md. Adil Karim who is a fine calligrapher and written title page and dedication of this book. Prof S. Iraq Raza Zaidi composed the chronogram of this book. He has written chronograms of my other books also. In the Tazkiras of mashaikh chronograms of their birth and death are recorded. Prof Zaidi is an expert of that, I thank him. I thank Mr. Rakesh Sabiri who arranged me the latest location of some of the dargahs of Punjab. 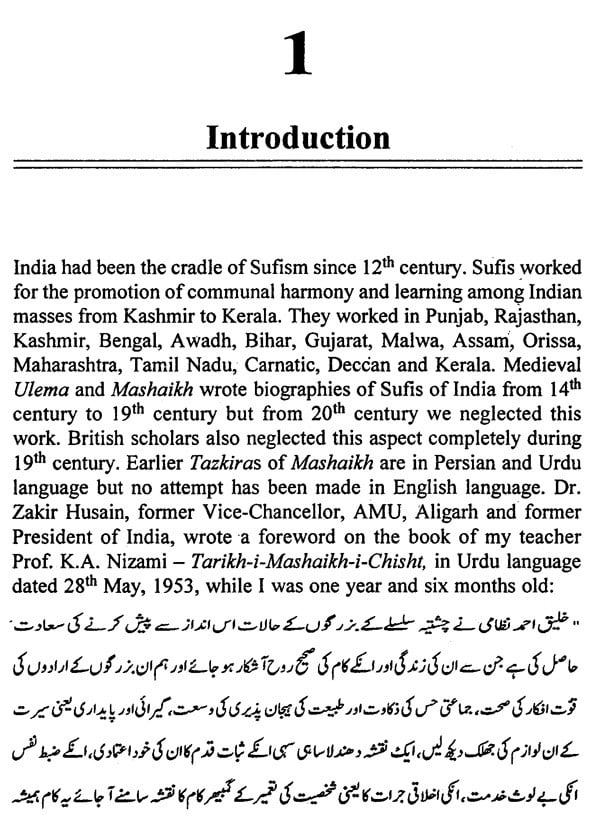 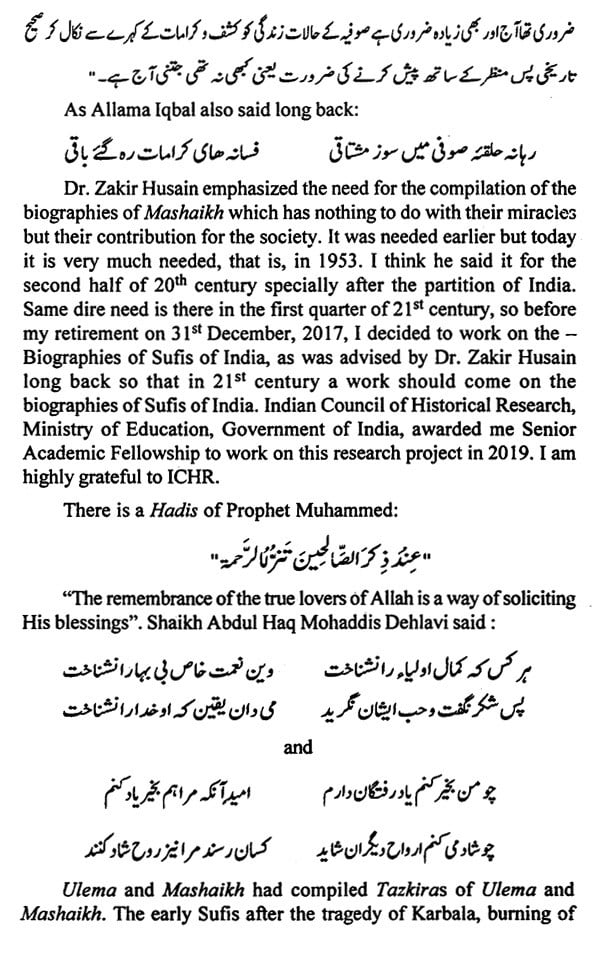 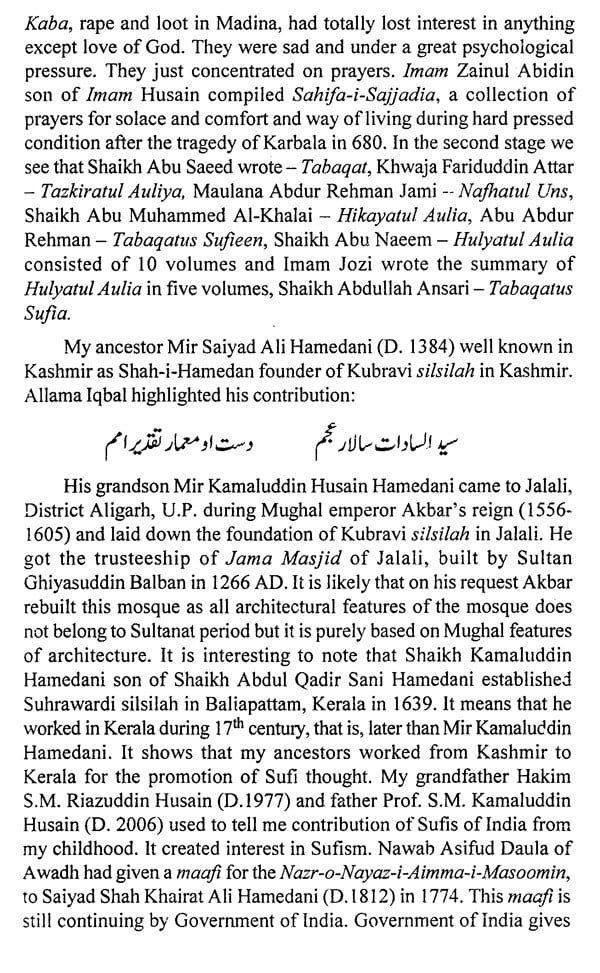 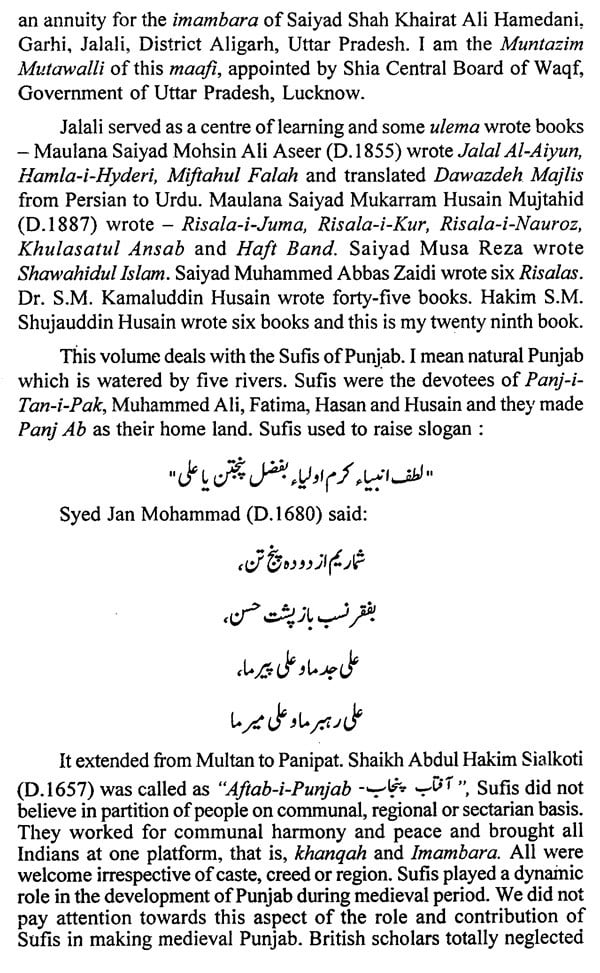 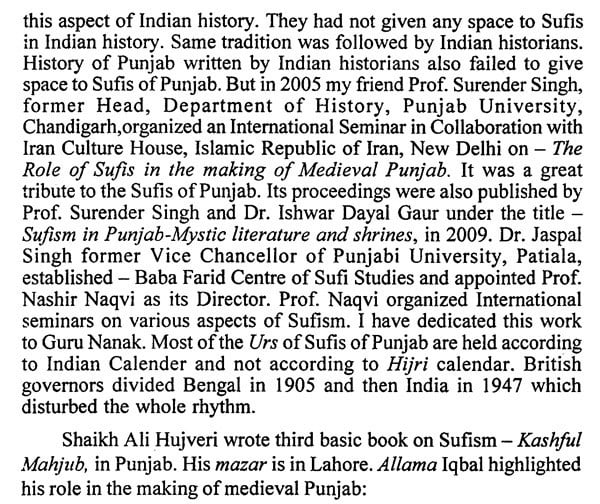 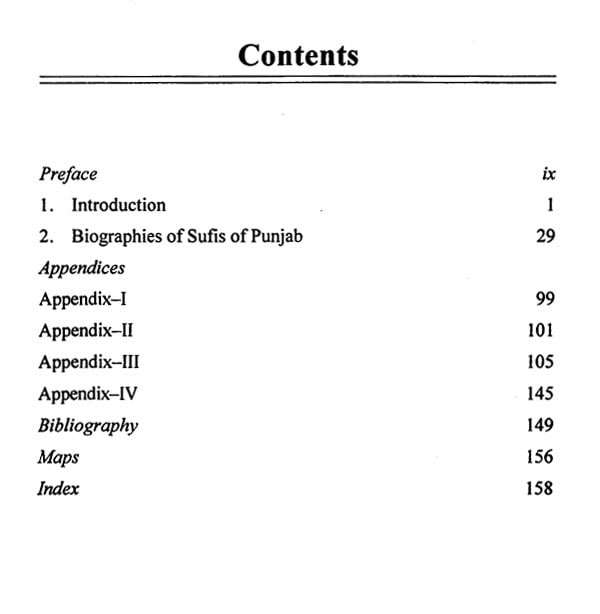 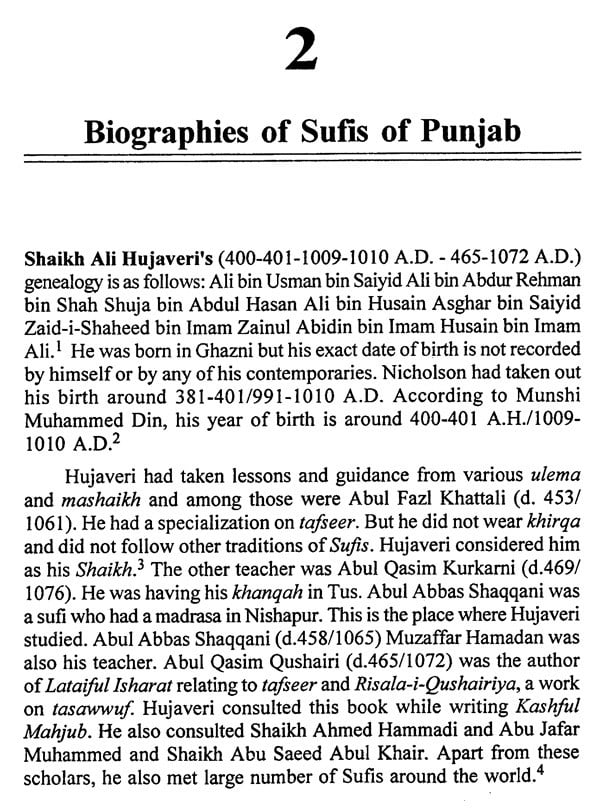 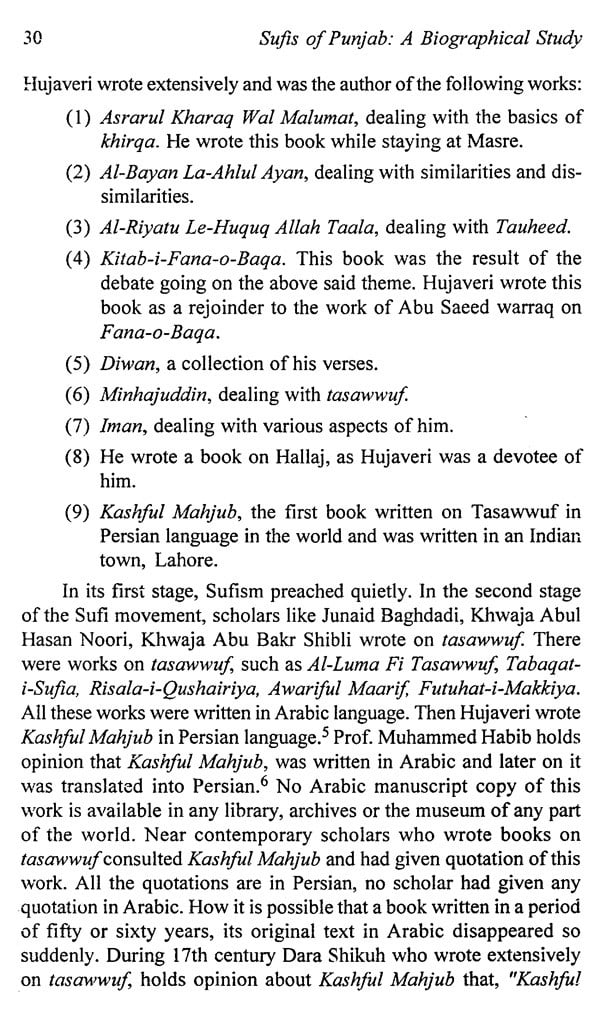 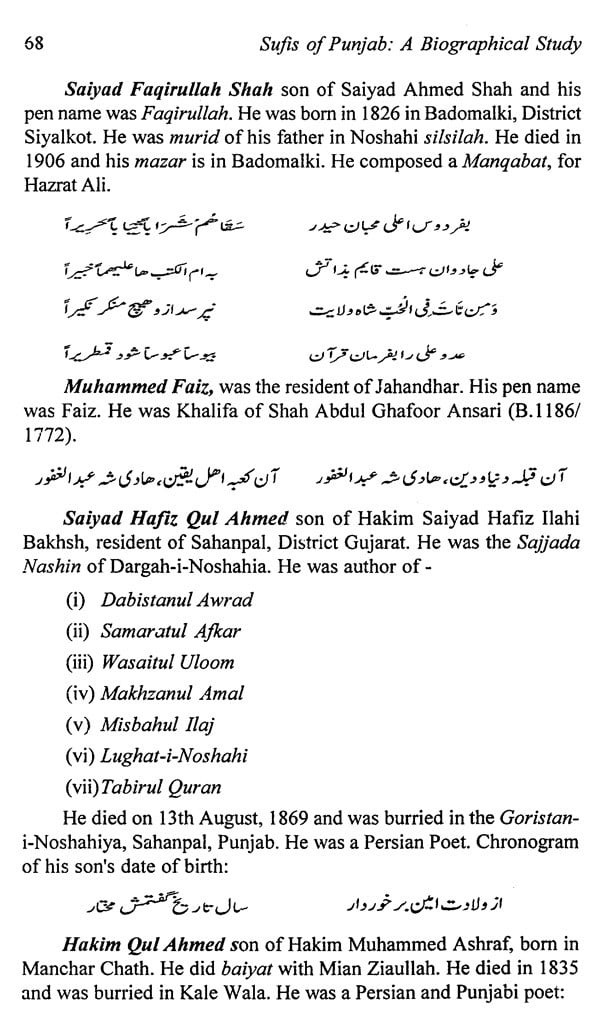 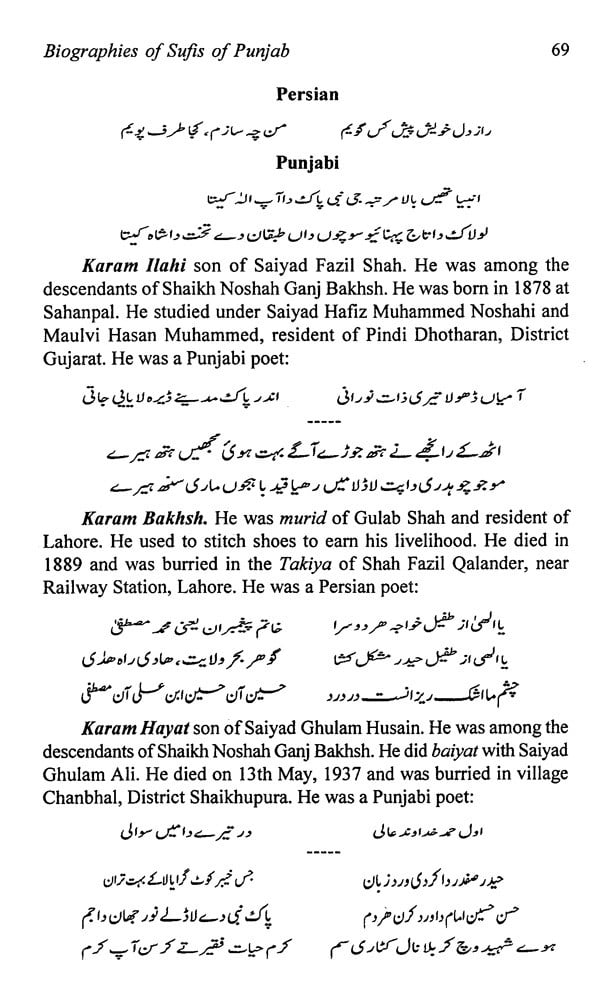 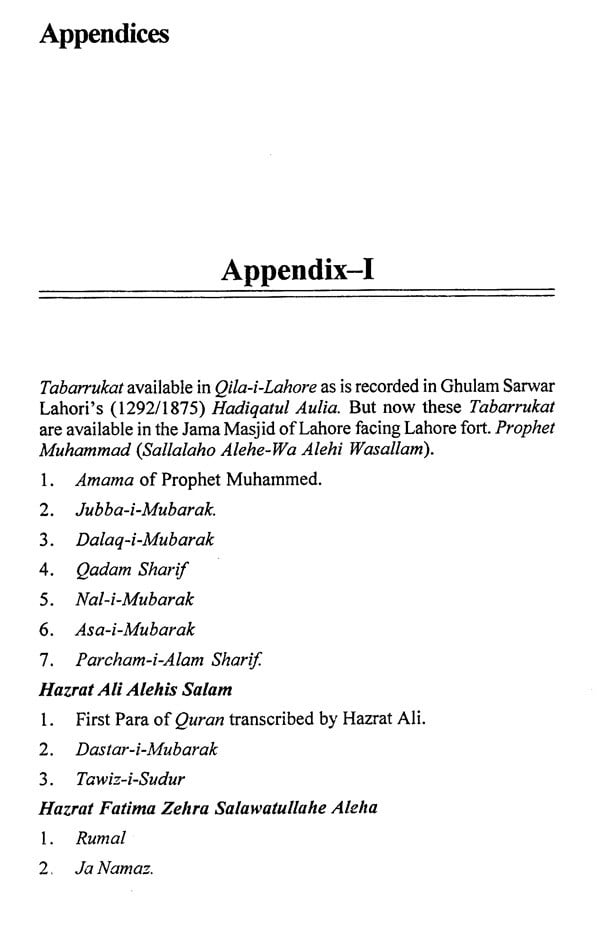 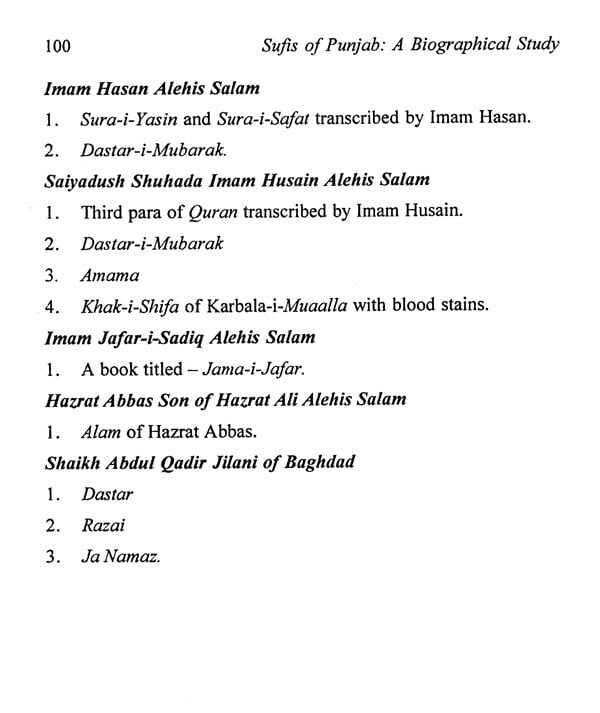