This book attempts to inculcate the greater understanding of the universality of the Sufi message as given by Hazrat Inayat Khan. Highlighting the unity of religious ideals, it explains the connections between Sufism, Hinduism, Yoga, Zoroastrianism, and other spiritual and religious traditions. It also deals with the alchemy of happiness.

Hidayat Inayat-Khan, the third child of Sufi Master Hazrat Inayat Khan and Ora Ray Baker-Bernard, is a well-known music composer and conductor. He followed his family’s musical tradition, of which his great- grandfather Maula Bakhsh and his father Inayat Khan were the highlights, and was violinist in different orchestras and string quartets. He is the creator of the Message Symphony, the Gandhi Symphony, and many other works like the Suite Symphonious. Also, he was a Professor of music at the Lyceum Musical de Disulfide, France and, later, in Holland.

At an age when people normally retire from work, Hidayat Inayat-Khan accepted the leadership of the Sufi Movement as its Representative General and Pir-o-Murshid, in complete dedication to its founder, his father, Hazrat lnayat Khan.

Hidayat Inayat-Khan has gifted us with this book which is a powerful and potent distillation of the spiritual heritage handed down. from his father, Hazrat Inayat Khan, founder the Sufi Movement in 1923. This book is written with great clarity and quintessential substance—the Sufi Message. It subtly, and at the same time remarkably, highlights the universal’ quality of the ‘Message’ for it articulates the connections between this universal Sufism Message and Hinduism, Yoga, Zoroastrianism, and other spiritual and religious traditions.

This is an important text because it opens the realm of Sufism beyond the confines of classicism towards a greater understanding of the universality of the Sufi Message as given by Hazrat Inayat Khan.

The universal quality of the Sufi Message is highlighted by the following words of Hazrat Inayat Khan.

“Sufism in itself is neither religion nor even a culture as a distinct or definite doctrine. There is no better explanation of Sufism than saying that any person who has knowledge of life outside and within is a Sufi. Therefore, there has not been in any period of the world’s history a founder or an exponent of Sufism, but Sufism has been all the time. No doubt, as far as we can trace, we find that since the time of Abraham there have been esoteric schools; many of them were called Sufi schools. The Sufi schools of Arabia had Arabic culture; it was more metaphysical. The Sufi schools of Persia developed more the literary aspect; and the Sufi schools of India developed meditative faculty, but the truth and the ideal have remained the same as the central theme of Sufism in all these schools.”

This book represents the concentrated essence of the entire body of work of Hazrat Inayat Khan in a pithy, comprehendible and accessible form.

Sufi Movement
Hazrat Inayat Khan gave the name ‘Sufi Movement’ to the organization, which is working for the spreading of the message in our time. The term ‘Movement’ describes an accommodation to all circumstances and changes in the continual progress in the way of life in the world.

Universal Worship
The ‘Universal Worship’ is a ceremony in which all religions are symbolically represented: Hinduism, Buddhism, Zoroastrianism, Judaism, Christianity, Islam and all those known and unknown to the world. This ceremony is inspired by the great ideals of love, harmony and beauty.

Beloved Ones of God
‘Beloved Ones of God’ are the words with which Hazrat Inayat Khan always greeted his audience, whether the audience was one of Christians, Jews, Buddhists, Hindus or Muslims. These magic words were like a historical call for ‘Unity of religious ideals,’ launched for the first time in religious history.

Unity of Religious Ideals
Unity of Religious Ideals does not mean mixing all religions together as one impersonal concept. It means respecting all religions at their own level of expression. It is obvious that following misinterpretations by the followers, the original ideals symbolically formulated in all religions, gradually degenerated in speculative dogmas, conventions, regulations and theories. Spiritual Liberty Another historical concept, expressed by Hazrat Inayat Khan is the call for Spiritual Liberty’. Those two words, which had never been placed together—representing as historical formulation relating to ‘Spirituality’—are so positively contrary to religious indoctrination or to the working in conservative orders, where the power of the leader is dominant.

Hazrat lnayat Khan often said that there are as many truths as there are pilgrims searching for Truth; and when one believes in the pure spirit of one’s own religion, one then discovers that same spirit as the source of inspiration seen originally in all religions. 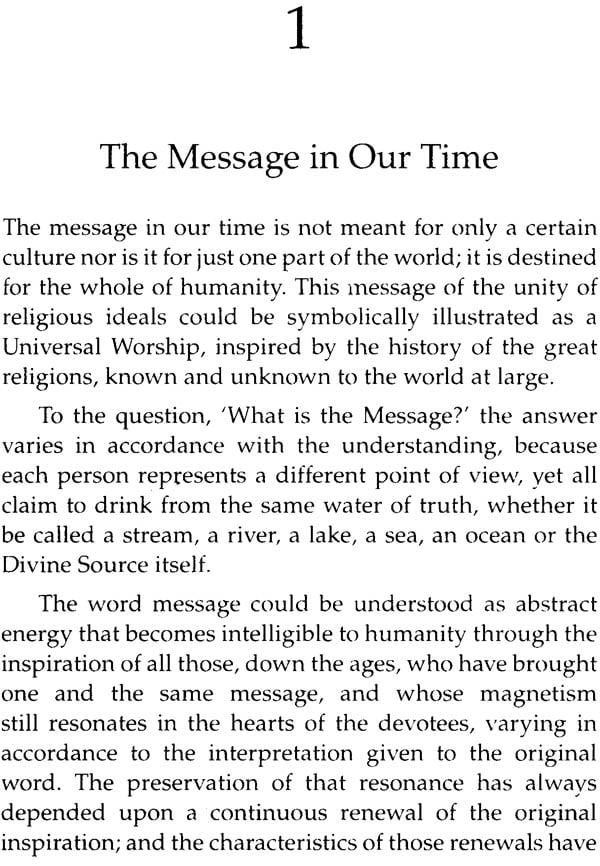 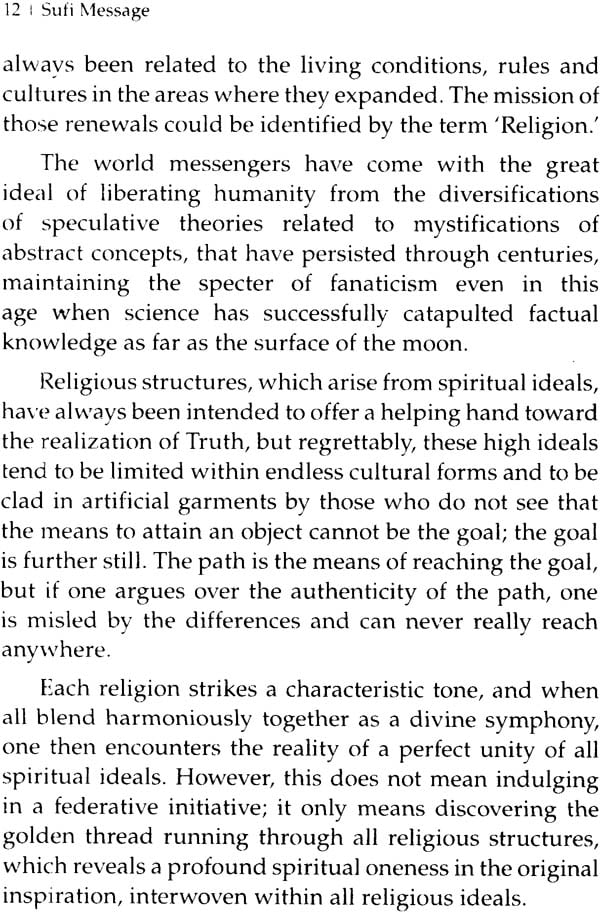 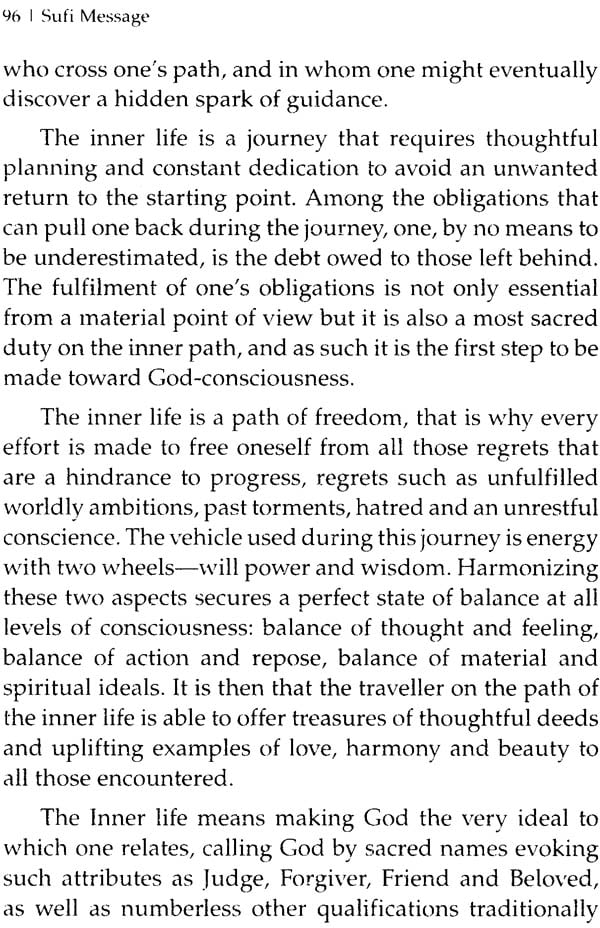 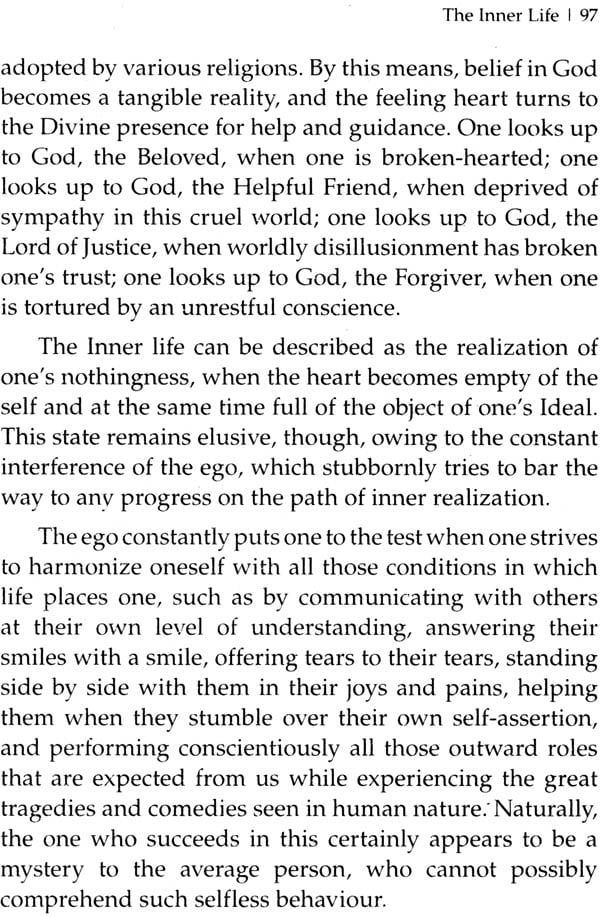