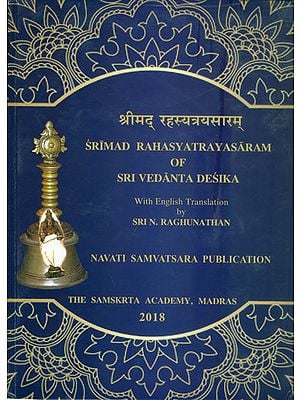 $65.00
Notify me when this item is available
Save to Wishlist Send as E-card Share by Email
Preface

The eternal happiness is sought after by every living creature and the difference among them lies in defining what constitutes eternal happiness and how to achieve it. The Sanataria Dharma holds Vedas as the source of knowledge. It enfolds different schools of philosophy and the religious sects following them have also been different. Among these schools, Vedanta is very popular and is widely practised. Even within this Vedanta, there are many schools of which three are well-known, namely-

1) The monistic School, generally known as Sankaric Advaita
2) The dualistic School, the Dvaita of Ananda Tirtha and 3) The Visistadvaita School of SrI Ramanuja, generally rendered as qualified monism.

The Visistadvaita school follows Paficaratra Agama texts and the Divya Prabandha Pasurams of Alvars in Tamil besides the other scriptures. Among the scriptures, the Vedantic schools lay emphasis on certain basic texts and these works are studied with religious fervour and observance.

The religious texts thus emphasized in the Visistadvaita system are four in number and they are together referred to as grantha catusiauam. Studying these works is known as the most useful pursuit of time - kalaksepa and the Acarya who instructs these works is referred to as granting the blessings of knowledge. From these terminologies, we can understand the importance attached to theses works. The works are - (1) Sri Ramanuja's bhaya on the Brahma Suiras known as Sri Bhasya and (2) his bhaeva on the Bhagavadgita (both in Sanskrit), (3) the commenteries on Tiruoaumoli of Sri Nammalvar known as Bhagavad visaya, and (4) the esoteric texts called as Rahasya granthas. The commentaries and the Rahasya granthas are composed in Manipravala style where Tamil is used in general with liberal use of Sanskrit technical words.

The Rahasya granthas or the esoteric texts expound the Vaishnavistic tenets. They constitute a very important and significant volume in the Vaisnava literature.

Generally karma, bhakti and jnana are considered to be means for moksa (eternal happiness) jointly or severally with different schools assigning different order of importance to them. The Vaishnavism of Sri Ramanuja holding - Moksa is attainable by him (aspirant) whom He (God) chooses, as the important passage and defining the central theme of philosophical discourse, presents the doctrine of Sarnagati (surrender) as the means possible for the aspirants than bhakti etc. which may not be possible to be practised to their full. This doctrine of surrender and all the attendant accessories are presented in these rahasya works. These rahasya works deal with three, important aspects - Tattva, Hita and Purusartha. As there are differences among the Vaisnava Acaryas on some of these aspects, the rahasya works t low different traditions, essentially referred to as the Southern school and the Northen School.

Svami Desikan (C.E.1268) is held in a very exalted position by the adherents of Northern school. He is Kavitarkika Simha, vedantacarya and Sarvatantra Svatantra. He has composed more than hundred works, some of them in Tamil too. His work on the rahasyas known as Srimad Rahasyatrayasara is considered to have emarged out of his pen probably at the ripe old age.

The three important mantras which explain the nature of Supreme God-head, jivas, their relationship and the way of salvation for the jiva, namely, - astaksara, (Tirumantiram), Dvaya-mantra and Caramasloka are dealt with in this work. As they constitute the triad of rahasya, they are called rahasya traya.

This work of Sri Vedanta Desika deals with in 32 chapters - (1) the three aspects - Tattva, Hita and Purusariha; (2) the three rahasyas - Astaksara, Dvaya-mantra and Carama sloka; (3) the concept known as arihapaiicaka - (i) the nature of the God (Brahman) to be attained, (ii) the nature of aspirant, (iii) What is attaining, (iv) impediments and (v) the way forward); and (4) the doctrine of surrender.

The Rahasyatrayasara or "The essence of Three Secrets" is the magnum opus of Sri Vedanta Desika, the greatest dialectician of the Visistadvaita School. Sri Desika composed this highly esoteric work to reaffirm the doctrines of Visistadvaita based on 'Prasthana trayi' or the three sources namely, the Upanisads, the Brahma Sutras, and Srimad Bhagavad gita. These doctrines were propounded and proclaimed by the 'Munitraya' or the triad of Sri Nathamuni, Sri Alavandar (Sri Yamunacarya), and Sri Ramanuja. The sn Bhasya and the Gitabhasya of Sri Ramanuja, which are his exhaustive commentaries on the Brahma Sutras and Srimad Bhagavad Gita, along with his other works, lucidly set out the Visistadvaita interpretation of the scriptural authorities; these established devotion and surrender (bhakti, saranagaii and prapatti) as the means to salvation.

The Rahasyatrayasara is intended to enable Sri Vaisnavas desiring moksa, to understand clearly and in all details, the three great 'secrets' of Visistadvaita. These Rahasyas or metaphysical secrets encapsulated the purport of Tattva or Real. The triad of the Tirumantra, the Dvaya and the Caramasloka, contain these Rahasuas,' These proclaim and lead the devotee to the doctrine of absolute surrender or Sarnagati and prapatti to the Supreme Lord Sriman Narayana. The Alvars are the supreme example of this doctrine. They unconditionally surrendered themselves to Sriman Narayana and totally engrossed themselves in His namasmarana, They realised the Supreme, discarded everything else and immersed themselves in the ecstasy of God experience. The enchanting divine poetry of the Alvars is the outpouring of their mystic experiences.

The Rahasyatryasiira consists of 32 'Adhikaras' or chapters. Sri Desika seems to have been fond of the figure 32. His fondness has precedents. The varaha Purana says that while worshipping God one should avoid 32 transgressions. There are 32 Brahma Vidyas in the Upanisads, The Bhagavad Gita has 18 Chapters, the Brahma Sutra 4 Chapters and Nammalvar’s Tiruvaymoli 10 cantos. Added Together, these total to 32. 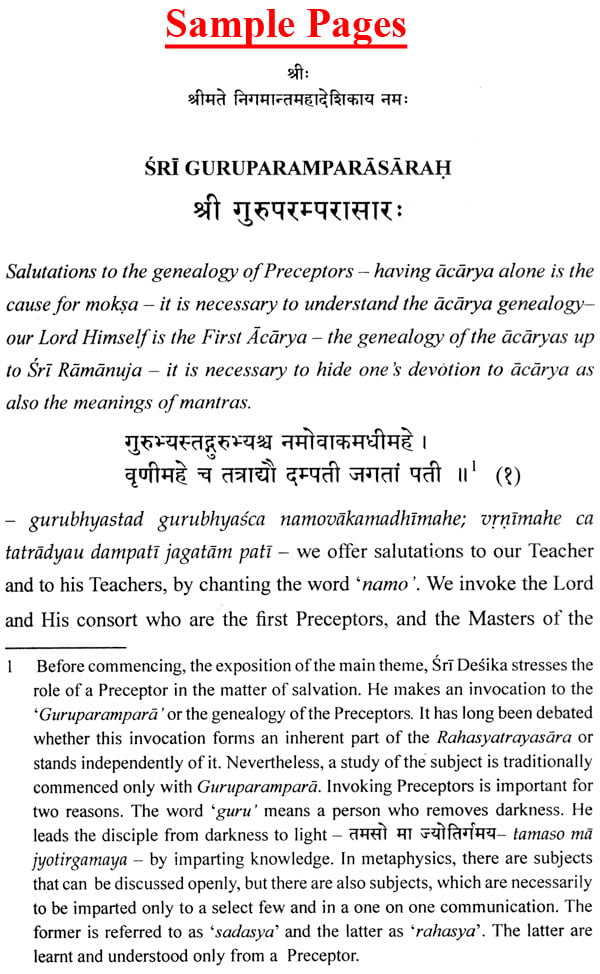 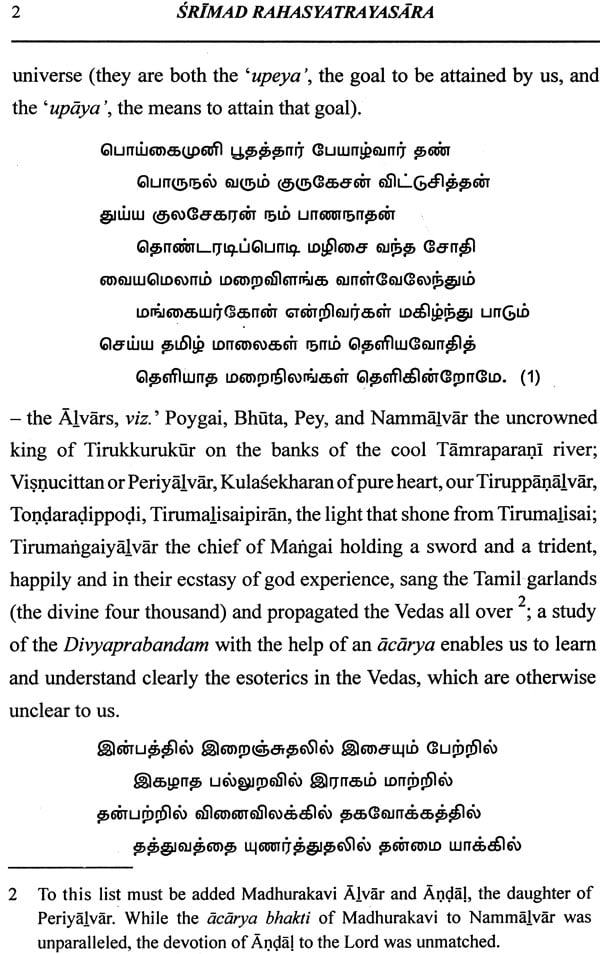 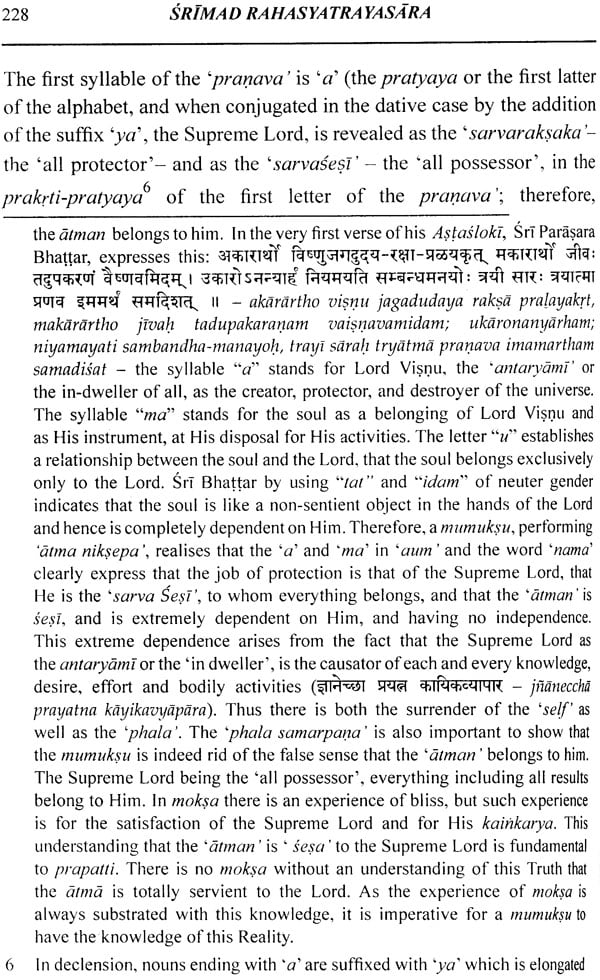 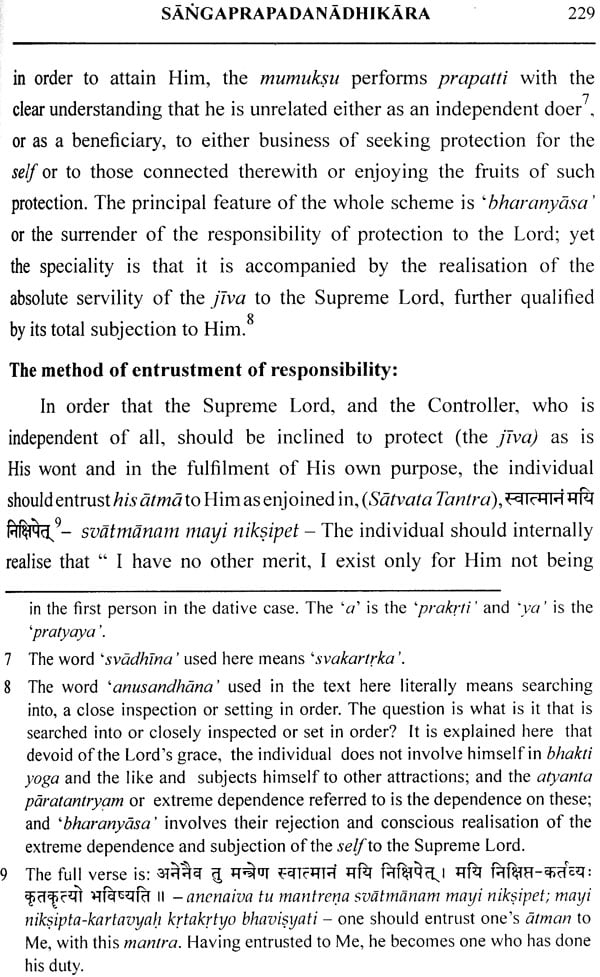 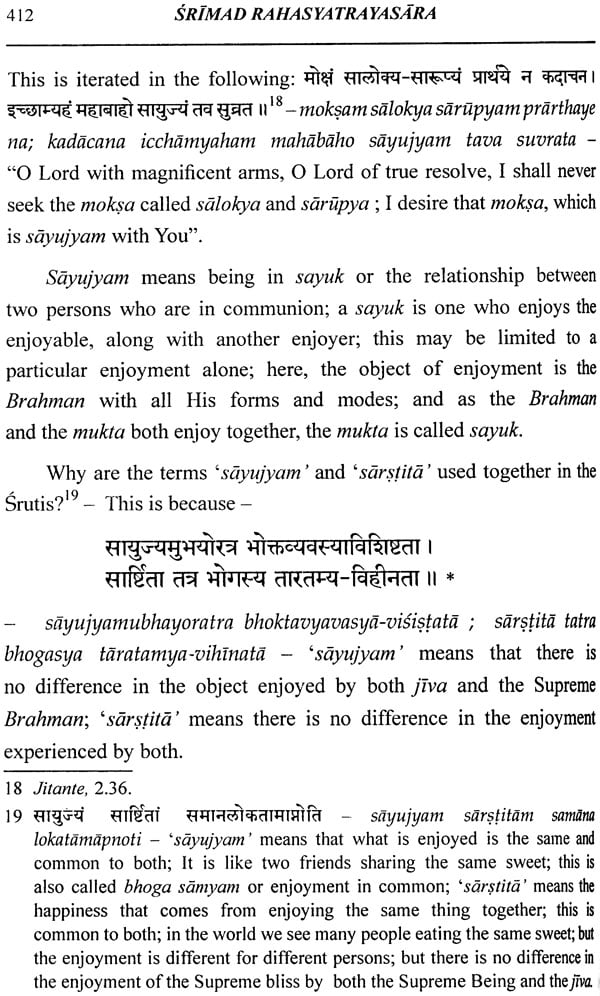 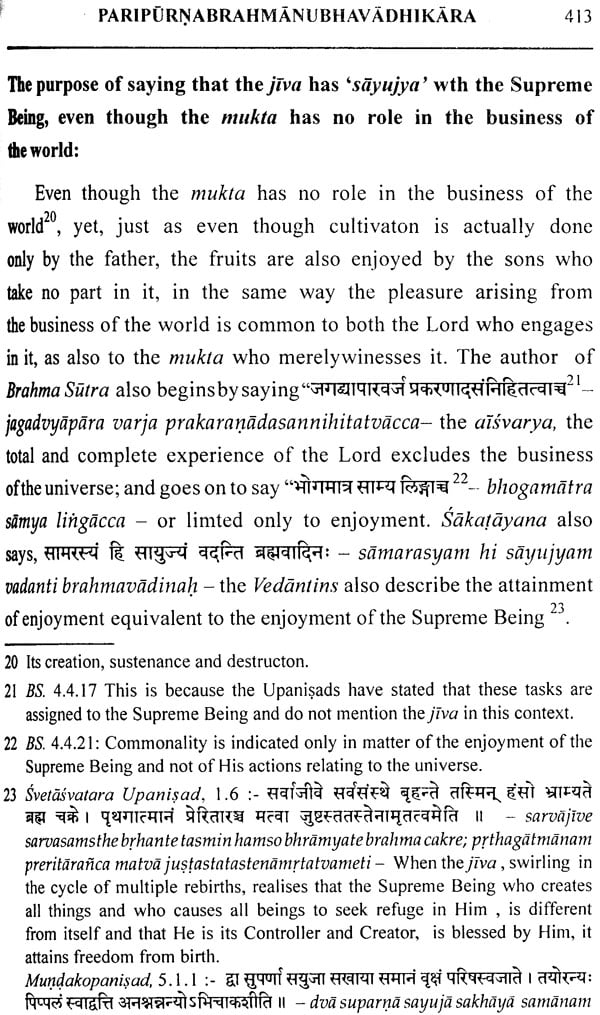 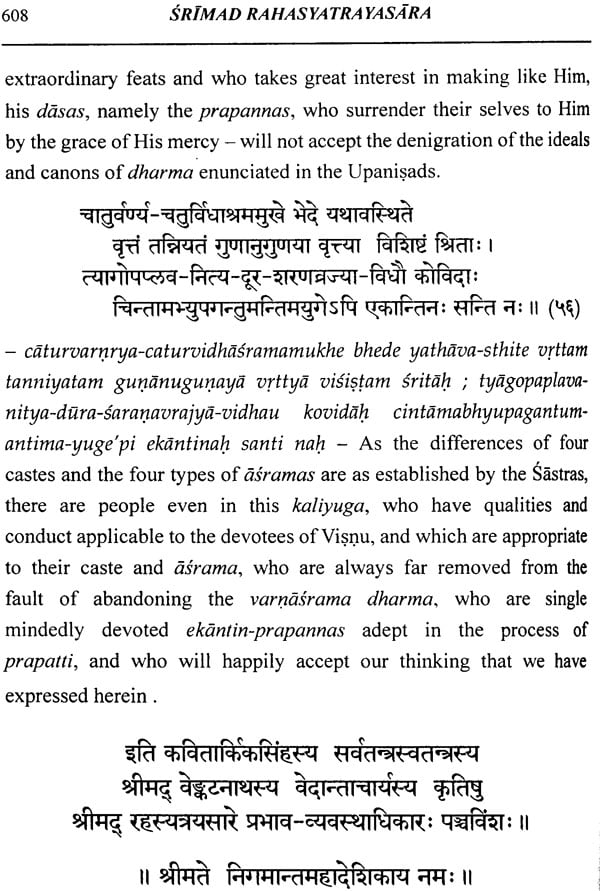 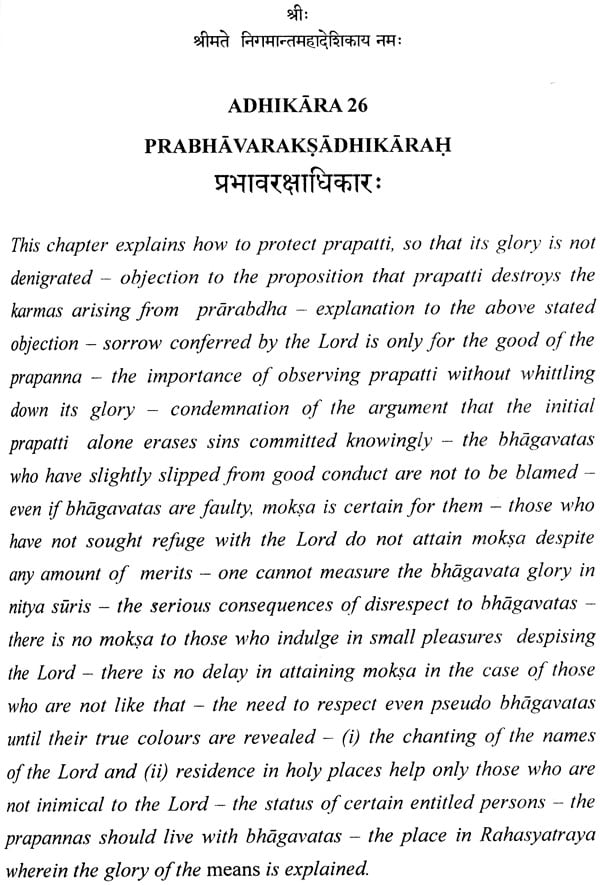 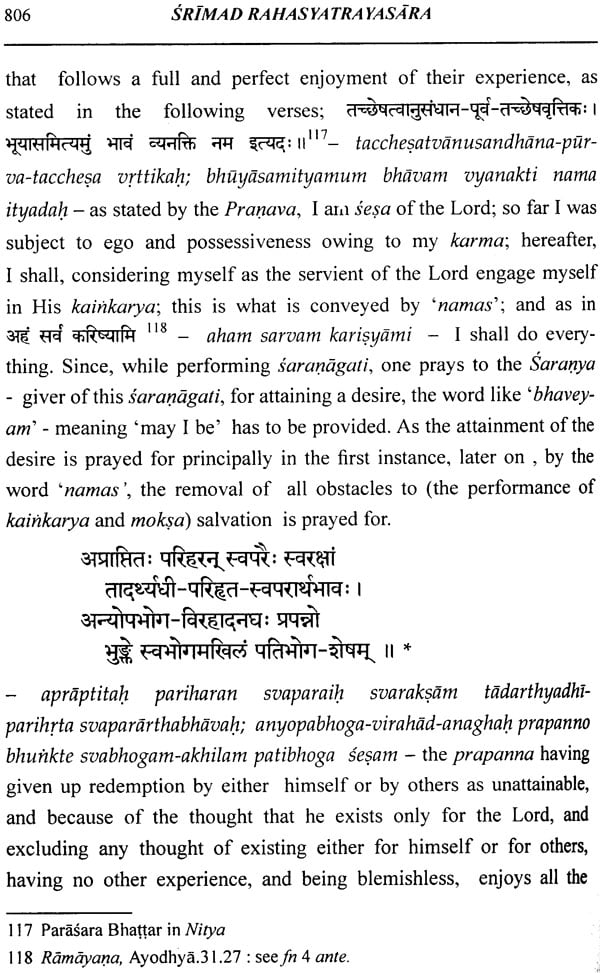 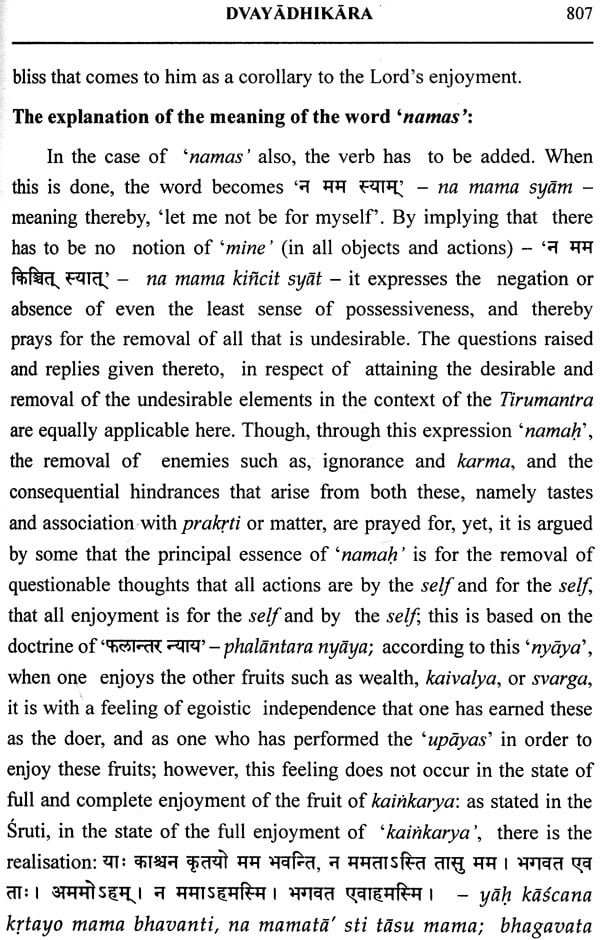 The Philosophy of Visistadvaita Vedanta (A Study Based on Vedanta Desika’s Adhikarana-Saravali)
8.8 inch X 5.8 inch
$44.50

Fundamentals of Visistadvaita Vedanta: A Study based on Vedanta Desika's Tattva-mukta-Kalapa
8.8" X 5.8"
$44.50

The Epistemology of Visistadvaita (A Study Based on the Nyayaparisuddhi of Vedanta Desika)
8.9" X 5.8"
$32.00