This volume, Srila Prabhupada Smaranam, is a substantial literary offering by Satsvarupa Dasa Goswami meant to further increase the kunda of Prabhupada remembrance and glorification. The reader will find this book a delightful composition of anecdotal history, intimate recollections, conversational prayers, and commentary on photographs of His Divine Grace Abhay Caranaravinda Bhaktivedanta Swami Prabhupada, the beloved Founder-Acarya of the International Society for Krishna Consciousness. The followers of His Divine Grace will find these pages invoking the presence of their spiritual master with invaluable particulars of his qualities and activities as well as worthy praise and moving supplications by the author.

Satsvarupa Dasa Goswami's book can be arguably seen as a private meditation, one that assumes in the reader the kinship of a life dedicated to the spiritual master-disciple relationship, particularly with Srila Prabhupada Thus Srila Prabhupada Smaranam may present a challenge to one who has not made such a commitment. Even so, I would recommend that everyone who has been fortunate enough to have Srila Prabhupada touch their lives to enter the mellow waters of this volume and sample for themselves the author's successfully-rendered portrait of loving rapport with our Guru and Founder-Acarya, Srila Prabhupada. For the novice as well as for the devout, this book promises a cathartic journey guided by an accomplished writer who is both historically informed and intimately associated with His Divine Grace.

The substance of the book comes from intimate observations on photographs and meditative, often prayer-like, addresses to Srila Prabhupada. The spiritual master is one who delivers God to everyone without discrimination and who is ably delivering those who are willing to take his instruction the mercy of Lord Sri Krishna. Srila Prabhupada Smaranam gives evidence for and is in itself an experience of the sublime loving nature of such a spiritual master, and pure servant of the Supreme Lord. It is possible to find defects in any endeavor yet it is the opinion of this humble reader that this volume's only significant frailty is that of requiring a disposed audience.

Srila Prabhupada Smaranam is a new form of visually rich Srila Prabhupada meditations and memories by Satsvarupa Dasa Goswami. This format contains a spectrum: the variegated photographic vapuh, reflections, prayerful insights, instructive and historical observations by the author, the endearing free-flowing prayerful poetry in prose as well as sections of modern poetry; all centered on the theme of smaranam or remembrance of Srila Prabhupada.

The composition, while resembling a colorful mosaic or collage, peaks in the crescendo and heartbreak of Srila Prabhupada's disappearance from this world. The nine reflective Prabhupada Smaranam sections, forming the main body of the work are enriched by a variety of photo commentaries.

This Satsvarupa Dasa Goswami book is suitable for all, senior or weathered practitioners of bhakti-yoga, as well as the newcomers. It is not to be mistaken for a coffee table book; it is a rather deep and thoughtful, spatially rich, experiential journey, which connects reader to the vapuh (visual) record of the Founder-Acarya of the International Society for Krishna Consciousness and completes the personal portrait of the universal guru, Srila Prabhupada, while stricly adhering to his vani (instructions).

As the reader approaches each segment of the Srila Prabhupada Smaranam volume, he or she will be tuning to the key of service in separation, which is a necessary and irreplaceable element of an individual follower's realization, and which is also an essential ingredient of Prabhupada consciousness for all generations to come; this book is an extremely valuable and yet unique contribution, coming out almost thirty years since first publication by the same author of Srila Prabhupada Lilamrta, the official multi-volume biography of the founder of Hare Krishna movement. 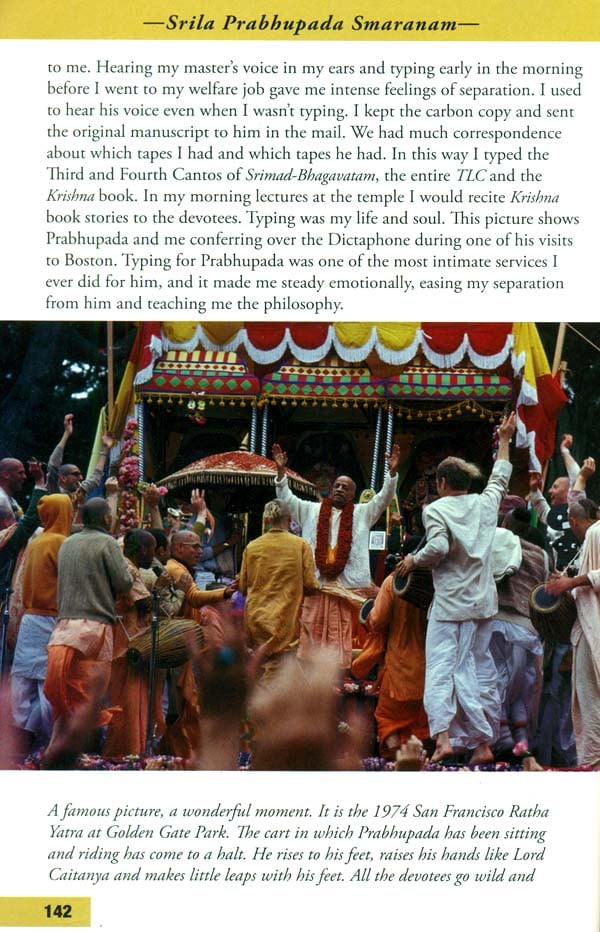 Prabhupada Vijaya (A Collection of Articles Glorifying His Divine Grace)
By Swami B. G. Narasingha
$30.40
FREE Delivery
$38  (20% off) 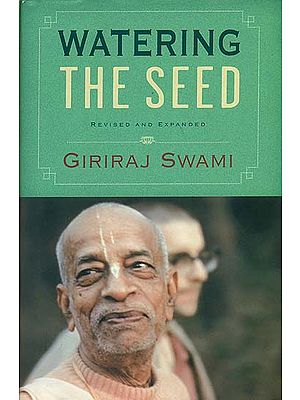 Watering The Seed (With Teachings from His Divine Grace A. C. Bhaktivedanta Swami Prabhupada)
By Giriraj Swami
$24.80
FREE Delivery
$31  (20% off)