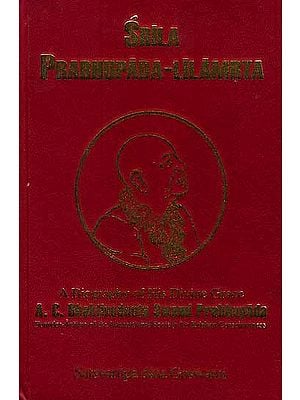 Srila Prabhupada-Lilamrta: A Biography of His divine Grace A. C. Bhaktivedanta Swami Prabhupada Founder-Acarya of the International Society for Krishna Consciousness (In Seven Volumes)

It is a distinct and unusual honor for me to be asked to write a foreword to this eloquent and informative biography of His divine Grace A. C. Bhaktivedanta Swami Prabhupada. To my great regret, I never met him during his sojourn here in America. But I feel that I have met him. The spiritual reality of a great teacher lives on in many ways, not the least in the lives of those he has touched. Since I have come to know many of Srila Prabhupada's disciples over the past years, as well as many devotees who were influenced by him without knowing him personally, I sense a certain acquaintanceship. To write this foreword seems, then, in some measure, like introducing a friend.

Although it is not true to say in all cases that a religious movement is the shadow of a great teacher, still there is some measure of truth even in that familiar statement. It will surely help readers of this book understand ISKCON better to know the man who founded it and to be aware of the soil from which he comes. The patience and care with which the author of this volume has reconstructed the long life Srila Prabhupada had already lived even before he set forth for America makes for absorbing and inspiring reading. I read it, I confess, not just became of my own interest in Srila Prabhupada but because the milieu the author recreates tells us so much more than a mere life story could. It reminds us of how very ensconced Srila Prabhupada was in one of the oldest religious traditions in the world. It recalls how very much went on in the generations, centuries, and even millennia before him that seems to be gathered and focused in his life and in his teaching. In one sense Srila Prabupada was not at all "original," and reading the story of his life raises questions, about our typical Western proclivity to attach such value to originality. What the book makes clear, on the contrary, is that Srila Prabhupada is a man who incarnates an ancient tradition. The opening verses of the fourth chapter of Bhagavad-gita, the Indian text most precious to ISKCON, teach that the ageless science of bhakti-yoga (what Christians might call the "devotional path" to God) is always received by what the Indians call parampara, that is, it is passed from one teacher to the next in a living chains, from ancient times to the present. Srila Prabhupada is best understood, as this book presents him, as one particularly effective link in this chain.

Yet, it must be added, Srila Prabhupada was also a unique person. To say that the teachings of the ancient ones come to us through a series of teachers does not mean that the teachers themselves are interchangeable. If they were so faceless, there would be little point in writing a biography of any of them. But this life of Srila Prabhupada is pointed proof that once can be a transmitter of truth and still be a vital and singular person, even - in a sense I now feel safe to use - in some ways "original." Srila Prabhupada lived during a particularly critical period in Indian history, that of British colonial rule and its aftermath. He worked with and among dozens of people who befriended, opposed, supported, or ignored him. He initiated Back to Godhead magazine. At what almost anyone would consider a very advanced age, when most people would be resting on their laurels, he harkened to the mandate of his own spiritual teacher and set out on the difficult and demanding voyage to America. Srila Prabhupada is, of course, only one of thousands of teachers. But in another sense, he is one in a thousand, maybe one in a million.

As a Christian, it is very important, and impressive to me that Srila Prabhupada took it upon himself to bring the teaching he so well represents to America. This sentence I am sure requires some explanation. First of all, as a Christian I come from a tradition in which God's sending of someone to bring a vital message to those who desperately need it is held in very high esteem. Throughout the Hebrew Scriptures, Yahweh sends prophets to remind the people how far they have strayed from His will, to expose the way they have misused the poor and failed to defend the widow and the fatherless. In the New Testament, Jesus sends forth his disciples two by two, asking them to take along only the scantiest clothing and equipment, telling them to bear the message of peace and salvation to the uttermost parts of the earth. God Himself is depicted as sending His only son into the world on a mission that would ultimately cost him his life. Christians are taught to respect and admire those who are willing to pay the heavy price of leaving comfort and security behind to go somewhere else to carry a message of liberation.

Today, however, many Christians have become comfortable and complacent, not only unwilling themselves to engage in such hardship but often unable even to understand or appreciate those who do. It is a great loss. Even though some people claim it is a good things that many Christians are no longer as interested in carrying their message to other parts of the world, that they have become less presumptuous or arrogant, I personally believe it has more to do with sloth and the satiety of consumer society than with humility. I have little patience with zealous proselytizing no matter who inflicts it on whom. I do believe, however, that any spiritual teaching worth following is also worth sharing. When I visited India, living in fact in the very place where Srila Prabhupada's tradition is centered, Vrndavana, I was thankfully received by everyone there, including the sages and holy men, and was asked to share my tradition with them. I spoke to them as a Christian about what Jesus Christ means to me and about what his teaching has to offer to the world. They listened attentively and gratefully. Their only complaint, as I recall, was that I had not spoken long enough Indians, unlike Americans, seem in no hurry to rush off to something else if there is a serious spiritual discussion to be followed. Given the fact that I was so well received in Srila Prabhupada's own land, I am sorry that he and his students still often find it so difficult to be heard or to be taken seriously here in America.

I am grateful for this book for two additional reasons that its writer could not have known. First, the author uses, among other methods, the growingly important method we in the West call "oral history." He incorporates the fruits of many interviews with the people who know Srila Prabhupada or who encountered him, who contribute some little bit of information, however tiny or fleeting, to make up the whole picture. In a few years all these people will have passed on. Those sources will be lost, at least to our mortal ears, forever. It is extremely important that the writer used this method and used it so very skillfully. I hope others will use it as effectively.

Also, perhaps without fully intending to, the author is giving us a portrait of an age the apex and the nadir of the passing epoch of which might be called "Western dominance." He shows us the devastation wreaked by "cultural imperialism" and demonstrates how stubbornly its destructive residues remain in the mental habits - and even in the eating patterns - of a previously colonized people long after the actual political rule of the outsider has been thrown off. Especially since this volume covers that period of Srila Prabhupada's life before he came to America, it is vital to see that he was also instrumental in leading a revival of traditional Indian spiritual and cultural values in India itself before he came to our shores. Since that selfsame phenomenon is now underway wherever the long arm of European dominance once reached, the book can also be read as an integral part of the growing literature of "Third World cultural renaissance."

Obviously this volume can be appreciated in many ways. It can also be read, I should add, as the very fascinating story of a very fascinating man. In any case, however the present reader wishes to approach it, I am glad no3w to terminate this foreword and allow him or her to get on with the joy of reading.

This volume begins in Calcutta in 1896, with the birth of Abhay Charan De, and ends in 1965 with Abhay Charanaravinda Swami on his way to New York City aboard the steamship Jaladuta.

The worldwide fame of His Divine Grace A. C. Bhaktivedanta Swami, later known as Srila Prabhupada, was to come after 1965- after he arrived in America. Before leaving India he had written three; in the next twelve years he was to write sixty. Before he left India he had initiated one disciple; in the next twelve years, he would initiate more than four thousand. Before he left India, hardly anyone had believed that he could fulfill his vision of a worldwide society of Krsna devotees, but in the next decade he would form and maintain the International Society for Krishna Consciousness and open more than a hundred centers. Before sailing for America he had never been outside India, but in the next twelve years he would travel many times around the world, propagating the Krsna consciousness movement.

It had been predicted in the scriptures and envisioned by great saints. A few of Srila Prabhupada's Godbrothers had even tried to make it happen; they had gone to England, only to return convinced that it was impossible. But not until Srila Prabhupada traveled to America did it come to pass-that Westerners wholeheartedly took up the life of Vaisnavism.