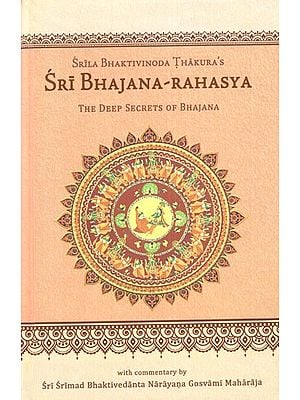 In compiling Śrī Bhajana-rahasya, Śrīla Bhaktivinoda Thākura has selected specific verses that serve to guide the sādhaka in awakening his eternal identity as a servant of Śrī Krşņa. He reveals the purpose of each verse with an introductory sentence. These verses are presented in chapters that correspond to the sādhaka's level of spiritual practice, from the early stages of faith up to prema, when one's heart is blossoming with his eternal relationship with Śrī Rādhā-Krsna.

In compiling Śrī Bhajana-rahasya, Śrīla Bhaktivinoda Thākura has selected specific verses that serve to guide the sādhaka in awakening his eternal identity as a servant of Śrī Krşņa. He reveals the purpose of each verse with an introductory sentence. These verses are presented in chapters that correspond to the sādhaka's level of spiritual practice, from the early stages of faith up to prema, when one's heart is blossoming with his eternal relationship with Śrī Rādhā-Krsna. The chapters are also divided according to the eight parts of the day, called yāmas. In each yāma Śrī Rādhā-Krşņa enjoy particular pastimes, a general synopsis of which is given at the end of each chapter. Following the introductory sentence, the transliterated main verse and its translation, are Bengali verses composed by Śrīla Bhaktivinoda Thākura himself. These verses paraphrase the main verse and also include his commentary. Most of them were not translated into Hindi and therefore have not been translated into English.

Just as the sage Bhagīratha brought the Bhāgirathi (Gangā) to this earth, oṁ vişnupāda Śrī Śrīmad Saccidānanda Bhaktivinoda Thākura Mahāśaya brought the present flow of the Bhāgīraths of pure bhakti to this world and therefore is also [known as] Bhagīratha. In his book Śri Harināma-cintāmaņi, Śrīla Bhaktivinoda Thākura has presented an extensive deliberation on the glories of the holy name, on the distinctions between nāma, nāma-ābhāsa and nāmaaparādha, and on the method of chanting the holy name. He has compiled Sri Bhajana-rahasya as a supplement to Śrī Harināmacintāmaņi. There are eight pairs of names (yugala-nāma) in the mahā-mantra. In this small book, Thākura Mahāśaya describes the mercy of these eight pairs of names and provides a wonderfully beautiful glimpse of how to cultivate and contemplate asta-kālīyalīlā through the kirtana of the mahā-mantra.

Several years ago, at the request of the sincere devotees of Mathurā and Vịndāvana, I continuously spoke on this book for some time. The listeners gave rapt attention and I also felt boundless joy. When I had completed my classes, the faithful listeners repeatedly requested me to publish a Hindi edition of this book. At that time, however, I was busy publishing some books by Śrīla Viśvanātha Cakravartī Thākura – in particular his commentary on the Bhagavad-gītā – and I was also engaged in preaching pure bhakti, as practised and propagated by Śrīman Mahāprabhu, around the world. Therefore, I was unable to give this project my attention.

Some time ago during Kārtika, after I had returned to Śrī Keśavajī Gaudīya Matha in Mathurā from preaching in the West, daughter Kumārī Savitā gave me a manuscript of Śrī Bhajana-rahasya in Hindi with my commentary, Bhajana-rahasya-vștti. I was so pleased and asked her how she had prepared it. She humbly replied that she had compiled it from notes she had carefully taken during my lectures and from the brahmacārīs' cassette recordings of those lectures. I kept the manuscript with me and after kārtika-vrata, took it with me when I again went abroad to preach.

We arrived at the very beautiful island of Cebu, which, being part of the Philippines, is situated in the Pacific Ocean. When, in that favourable atmosphere, I looked at the manuscript of Bhajanarahasya to edit it, I became astonished and could not believe that I had actually spoken it. I felt sure that Śrīla Bhaktivinoda Thākura Mahāśaya himself had inspired me to speak this commentary. To compile the manuscript, daughter Savitā had also meticulously searched through many authoritative books on rāgānuga-bhakti, thus further enriching the Bhajana-rahasya-vștti.

The guardian of the Śrī Gaudīya sampradāya and the founder of Śrī Gaudīya Vedānta Samiti, my most worshipable gurudeva, ācāryakeśarī aștottara-sata Śrī Śrīmad Bhakti Prajñāna Keśava Gosvāmī Mahārāja, used to mercifully encourage and inspire me, his servant, to publish Hindi editions of the books of Śrīla Bhaktivinoda Thākura Mahāśaya. Today, offering this book into his lotus hands, I feel unbounded joy. All glories unto him! All glories unto him!

Originally written in Bengali by Srila Bhaktisiddhānta Sarasvati Țhākura. The English is translated from the Hindi GVP edition.

Śrī Bhajana-rahasya is compiled by Śrīla Bhaktivinoda Thākura Mahāśaya. He has collected into the form of a book several confidential hints from his own method of bhajana to guide sincere sādhakas who are performing bhajana under his direction. Some years ago, this destitute person observed him performing bhajana. He was constantly reciting and relishing verses such as the ones in this book, thus becoming overwhelmed with bhagavat-prema.

For sādhakas whose faith is on the neophyte platform, the system of arcana is provided. Many people are unable to understand the distinction between arcana and bhajana and therefore use the word bhajana to refer to arcana. One can practise bhajana by performing the nine kinds of devotion (navadhā-bhakti). Because arcana is included within navadhā-bhakti, it is also considered a part of bhajana. There is a difference between complete bhajana and partial bhajana. Arcana means to worship the deity with awe and reverence; that is, with knowledge of the Supreme Lord's divine majesty and by observing etiquette. It is also arcana to serve the Lord with various paraphernalia according to rules and regulations and with the mundane conception of identifying oneself with the material body. In service rendered with intimacy and a sense of possessiveness (viśrambha-sevā), the harsh rays of awe and reverence are still apparent to a small degree, but no one can refuse the excellent sweetness of its cool, pleasant moonbeams. Therefore, a brief arcanapaddhati has been added at the end of this book.

Within the framework of this book, the secret meaning of bhajana is given in a way that captivates the heart. In the process of arcana, one remains more or less entangled in one's relationship with the gross and subtle body. In the realm of bhajana, however, the sādhaka passes beyond both the gross and subtle bodies to directly serve Śrī Bhagavān. The transcendental sentiments that others perceive in great personalities (mahāpurusas), who perform bhajana and who are completely free from all kinds of material designations, are not worldly or illusory. Due to being directly within the proximity of the non-dual Supreme Absolute Truth (advaya-jñāna para-tattva), who is beyond perception, they experience the transcendental sentiments of sevā that are beyond the range of material senses and material time.