South Indian Festivities is a disappearing festivities. The Hindu festivities and vrathas were designed by the great sages of old, each having a deep spiritual significance.

It is but a truism when we say that the life of an orthodox Hindu consists in the observance of a large number of fasts and festivities. The origin and rationale of most of these are lost in obscurity with the passage of time. The traditional explanations, found scattered in certain rare manuscripts, proverbs, sayings, and even in some of the nursery rhymes of the Hindus, have been lost; and in the course of time, are sure to be completely beyond the reach of humanity if immediate steps are not taken to gather and preserve them. It is proverbial that the Hindus follow the customs of their forefathers blindly, without understanding in the least the real motives behind their origin and the basic principles underlying them. Though many stories may be narrated to illustrate this fact, I will briefly narrate only one and then go on.

Once upon a time a great sage performed a sacrifice. A large number of people assembled to witness the event. A tame black cat was seen tied to the pillar supporting the sacrificial shed__ with a rope of kusa grass (Eragrotis cynosuroides). This was done to prevent it from coming there and upsetting the sacrificial vessels and arrangements. However this was interpreted by the simple—minded audience to be a sine qua non for the observance of such a sacrifice. From that time onward, great pains were taken by the performers of that sacrifice to secure a black cat! An act aimed at getting rid of a nuisance turned into an act of primary importance in the performance of the sacrifice, simply because the people did not care to know ‘the why and the wherefore’ of particular acts.

Every village has a temple, and people circumambulate it. Ask them why it should be done and you are taken for an impertinent unbeliever.

The use of turmeric powder with lime water, to cast off the influence of evil eye, is a common sight during marriage occasions and marriage processions; but how many will be able to give a rational explanation for the usage'?

We may quote instances after instances of people following a particular custom blindly, without understanding why and wherefore they do it. Such a practice is surely not g conducive to general welfare.

The Hindu festivals and Vratas were designed by the great sages of old. They were full of wisdom and capable of understanding and utilising the forces of nature. They thoroughly understood the human nature and human wants. They also knew about the dangers from super-physical forces and intelligences that humanity is susceptible to. Just as flypapers are used to get rid of flies, substances like a mixture turmeric and quicklime in a quantity of water were used, to get rid of super physical pests, directing super-physical forces that are injurious to human safety and welfare. They originated temples, festivals, Vratas, fasts and so forth with definite aims. As they were thoroughly eonversant with the needs of men while living, and also with their needs after they died, their aims may be said to be twofold. For convenience’s sake, we may sharply divide their aims into physical and l spiritual. The festivals, Vratas, fasts, and other such activities l are designed to serve either or both of these aims.

From the standpoint of those wise sages, physical acts are i for serving spiritual ends, and consequently people who take a short cut to spiritual progress need not attach much 1 importance to observances fostering physical gifts, but may utilise them as temporary stepping stones to reach greater heights; But a very large majority cannot take this short cut at this stage of human evolution, and consequently the observance of the festivals and Vratas should naturally be of a kind conducive to bodily comfort and relief, contributing but little to spiritual progress. But each and every one of the festivals and Vratas has a deep spiritual significance, and persons capable of taking the short cut to spiritual progress may advance very rapidly, if they understand the principle underlying the observance, and take to it in the right manner and in the right spirit.

If physical results are to be taken into consideration, there are myths attached to each and every one of the fasts, feasts, Vratas and festivals, and if people understand them and follow m the footsteps of the heroes depicted therein, physical results are sure to follow sooner or later.

When spiritual progress by the observance of a particular Vrata is to be explained, we must examine what takes place m nature everyday around us, and see whether there may not he anything akin to it, in the birth, growth, decay, and death of man. We should also see that our sacred scriptures are used as touchstones for testing our inferences.

Everyone will concede that there is a goal towards which everything in nature is tending. The aim of a tree is to produce seeds capable of reproducing the parent tree. The same thing applies to the animal kingdom also. Herein lies the key to unravel the mystery of the nature and progress of human spirit. Ugly this fact is emphasised by the phallic symbol in Siva temples and the images of gods and goddesses in all temples. The human body and the human principles are but layers within which the seed, namely, the spirit, is forming and maturing or ripening. When the seed is fully ripe, it will have no use whatsoever for the human body and the human principles and consequently it would shake or cast them off and begin to grow to acquire the shape and size of the parent it originated from. Let us take the formation and growth of this spiritual seed for our examination. To do this satisfactorily and clearly, we must distinctly bear in mind the simile of the seed. The principle out of which the tree grows is in the kernel we all know. This kernel has layers of pulp, skin and so on to protect it until it is capable of resisting extraneous influences. Human spirit is exactly like this kernel imbedded in layers of matter going by the name kosas or sheaths in Hindu philosophical parlance. Unlike the layers in a seed, the layers surrounding and protecting the spirit are cast off and renewed in the same way in which the slough of a serpent is cast off and renewed.

Scientists tell us that there are invisible forces between atoms and molecules holding them together. By stretching our imagination we can conceive these lines of forces gradually developing into minerals and vegetables. In fact, these are the lines on which the future nervous systems of animals are to be developed. The Hindus consider certain trees and plants in the vegetable kingdom, and certain animals in the animal kingdom, to be more evolved than the others. This conception is the result of observations made on the development of these lines of forces.

These lines of forces, after reaching a particular stage of development, manifest themselves as fine streaks of" light emitting a halo around them. These streaks, by play of forces, gather around them material sheaths of various grades of tenuity, forming the complicated nervous systems of animals. The various ganglionic knots are centres of brilliance l gathering around them material sheaths similar to the nervous sheaths. These centre of brilliance with the network of libres “of light diffusing a halo of light forming a definite beautiful shape within an ovoid of light, is really the spirit of man.

Brighter these centres and streaks of light in animals are, finer will be their nervous systems and consequently better bodies for receiving liner vibrations of emotion and intellect, built around them. The development of these centres and the connecting network of streaks of light to the point of perfection is, in fact, the goal towards which human and other evolutions are tending. The Hindu philosophy and its system of` Yoga are intended mainly to achieve this end. When this point of evolution is reached, the kosas or material sheaths having served their purposes, would fall off from the spirit to which they are now clinging, leaving it free to complete its own growth in the likeness of its parent.

Just as there are differences in the seeds in the number of the protective coverings for the kernels, there are differences in the intelligences also in the universe. The intelligence having the largest number of coverings, goes by the name `man’, and those having fewer ones, go by the names of various grades of angels or devas. There are hosts of them and they are of innumerable kinds and varieties. But the kernel or the spiritual principle in every one of them is the same.

The sages of old knew this, and consequently originated a variety of festivals with the progress of the spirit in view. For the progress of the spirit, the well—being of the various coverings is absolutely necessary till it is completely developed. Therefore the various customs and observances are so designed as to lead to spiritual growth, first by strengthening the coverings, and eventually but gradually, by throwing off those coverings, when they have accomplished their purposes.

Men in different stages of attainment or evolution are found in this world. Some require the outermost sheath to be strengthened for the welfare of the spirit within; to them, the observances would secure a healthy and strong body. 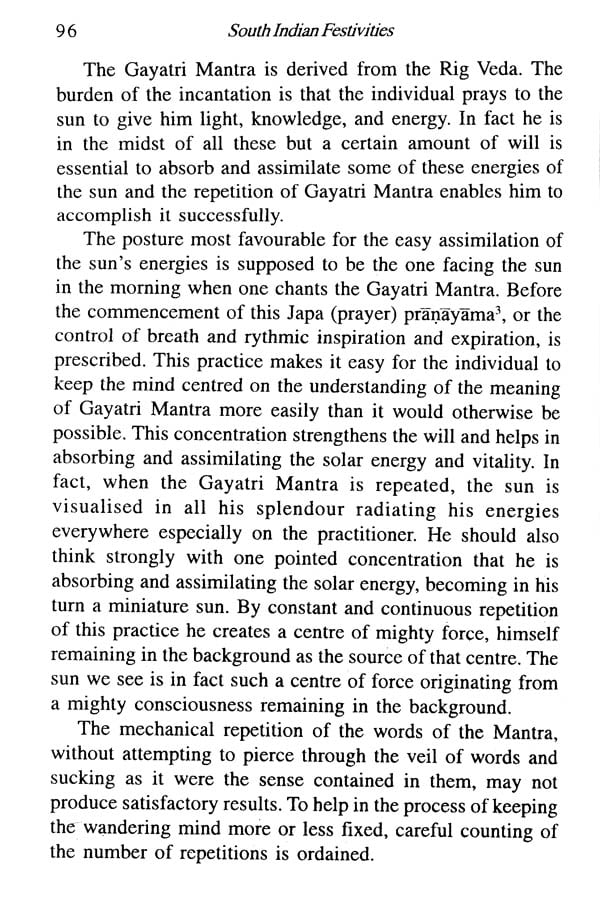