Songs of Purandaradasa (A Translation from Kannada into English)

Myduru Raghunandana, author (of this book) had a keen interest in listening to Carnatic classical music even from his school days. He developed his taste further later and more so after his retirement from his profession as an engineer in different parts of India. When he was working in Chennai, his interest further increased. His father was also popular as a Kannada composer and used to sing his own patriotic and devotional songs in Bellary dist. The present publication is the translator's first literary work. Eleven of these songs were published in The Sahitya Akademi Journal "Indian Literature"- issue (May-June 1997)

Purandaradasa is respected as the Karnataka `Sangeetha Pithamaha'. His songs are popular not only in Karnataka but also all over the South. Hence, the English version of his Padas is the need of the hour.

Haridasas of Karnataka have contributed significantly to the Indian Philosophy, Literature and Music. They followed the path of Dwaitha Philosophy (Sriman Madhvacharya) and toured the whole of South India (some of the North Indian places also), preaching 'Hari Bhakti'. They could find 'Hari' in the hearts of all and also visualize His presence in everyone.

In the `Poorvashrama' he was known as Seenappa Nayaka and was leading the life as a rich Banker (money-lender and jeweller) and (`parsimonious. In a miracle incident Seenappa gave up all the worldly possessions and became a perfect devotee of 'Sri Hari'. He was initiated to `Haridasa Pantha' and received the `Dasa Deeksha' by none other than Sri Vyasarayaru (Rajaguru Vyasaraja). In later years, the Guru also called him `Dasarendare Purandara Dasarayya' (if ever there was a Haridasa, it was Purandaradasa)! He gave him the "Deeksha Naama" of "Purandara Vittala", who became most popular among all the Haridasas. He led the life through "Madhukara Vruthi" (Ooncha Vruthi), along with his family members.

It is believed that Purandaradasa cmposed a colossal 4.75 lakhs padas!? It seems he had also authored few works like -Draupadi Vastrapaharana, Sudhama Charithre and Paratatwa Saara. But none of them are available so far. Unfortunately, only a few of the 4.75 lakhs songs are traceable. He himself has classified in one of his compositions as padas on pilgrimage (Theertha Kshetra Mahime), epics, dhyana, suladi, devaranama etc. Songs flowed out of him spontaneously uniting philosophy with poetry, blending devotion and melody.

For Purandaradasa and other Haridasas, Bhagavatha (Dashamaskanda) is the source material for their compositions. Especially while describing "Baalakrishna" their devotional creativity has no bounds. It is simply a downpour of devotional feelings! They paid more attention to "Bhakthi" than rituals. Purandaradasa brought in his compositions salient features of Upanishads. His songs are also called "Purandara Upanishath", which aptly describes the prominence of his works. The language of his songs is simple and colloquial which will at once touch the hearts of layman and cognoscenti. His devaranamas are soul stirring and outpouring of love, prayer and appeal, with undistracted devotion to God and carries the message of God, Dharma and Humanism.

Only Purandaradasa is revered as the `Sangeetha Pithamaha' (father of the Karnatic Music system). He framed a full system of music and established method of teaching both in raga and talas. For this, he framed sarale, janti varse etc and adopted the raga Maya Malavagowla for primary lessons. He introduced simple Geethas in the raga Malahari and also introduced the alankara in sapta talas, to familiarize with the seven talas. He popularized Suladi, ugabhoga and few other compositions. Thus, he moulded the Karnatic Music of the day. Even after four centuries, the method of teaching remains intact in all the areas where the system of music prevails. He became a source of inspiration and model for all the composers including Thyagaraja. In fact, Saint Thyagaraja has paid his respects and tributes to Purandaradasa and also followed his path.

`Devaranamas' are divine songs and have inspired people to strive and aspire for realization of God and liberation. This work is an English translation of `Devaranamas' composed and sung by great saint-poet Purandaradasa in Kannada. He was a part of the order of Haridasas (saints or servants of God) known as `Dasakoota'. The songs of Purandaradasa inculcated a sense of Bhakti (devotion). The Dasas sang these `Devaranamas' in the streets going from house to house and created awareness and a sense of devotion to Lord Vithala (an incarnation of Vishnu, the Supreme Lord) and a vision of life beyond. This movement spread far and wide in Karnataka from the 14th century and continues to be a driving force even today.

Purandaradasa has done not only the above work but also succeeded in God realization (Mukti Sadhana), if it is not out of place to say this. He, as well as other Dasas, have endeavored throughout their lives towards this objective. Therefore, whatever they said has become a doctrine. They have clearly impressed on human mind that basically man is by nature wise and can realize joy of divine knowledge (jnanananda swarupi) (Ref No.7, Dr. R.G. Gudi). Srinivasa Nayaka (before he was known as Purandaradasa) had met the well known devotee and composer in Telugu, Tallapakam Annamacharya (1408-1507) at Tirupati (South India) and sang before him Dasa's own songs. It shows that he had such an aptitude at a young age of 21 or earlier (Ref 4). Annamacharya appreciated Nayaka. 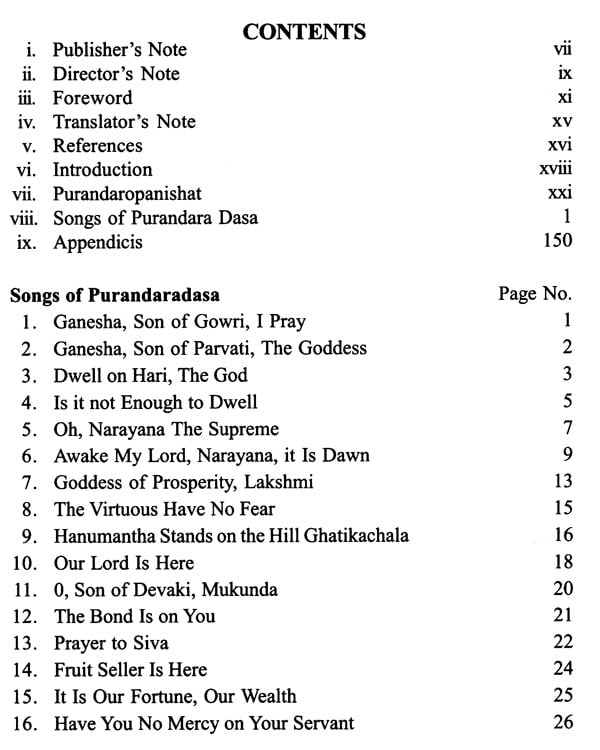 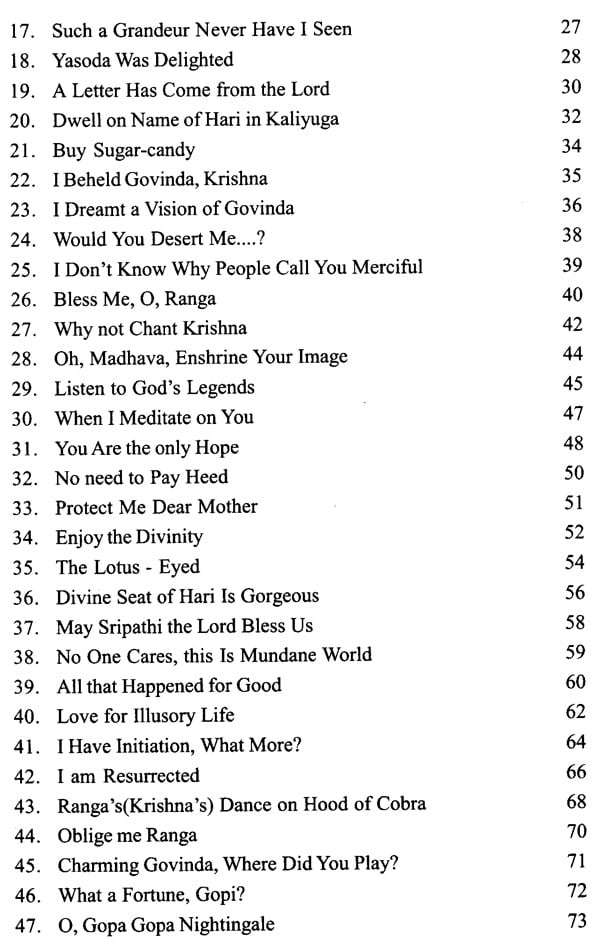 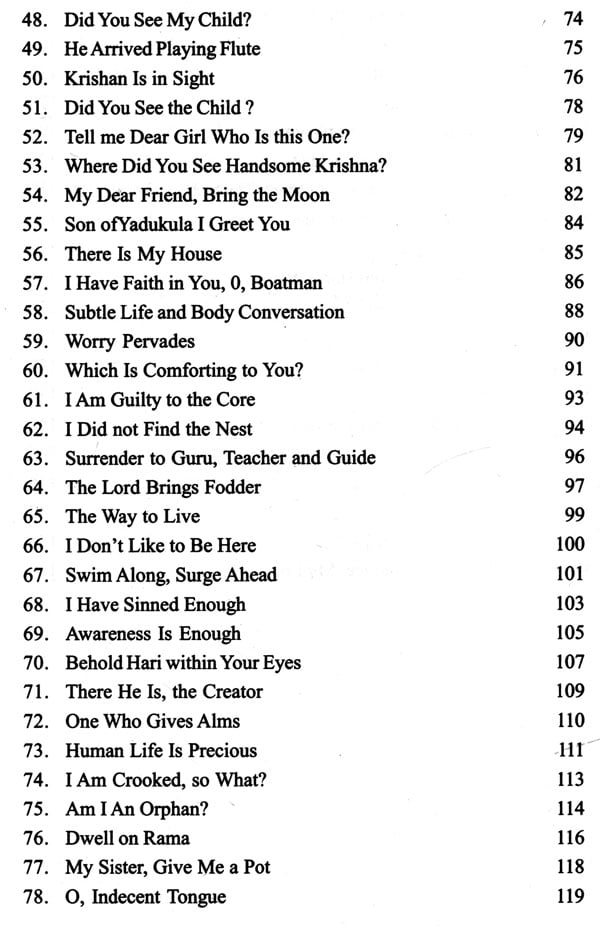 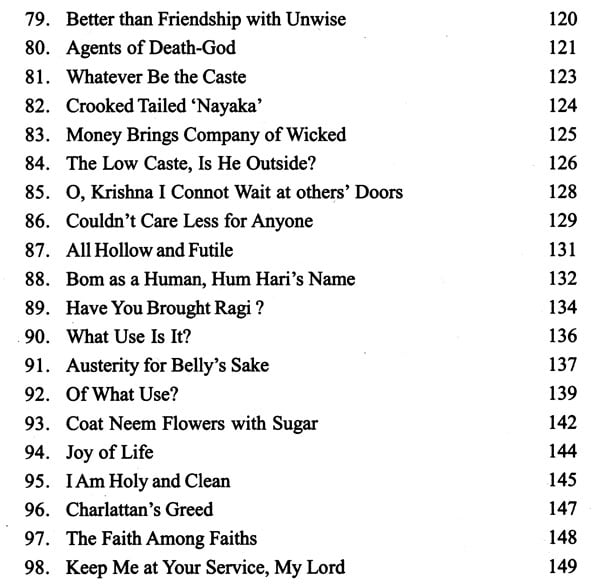 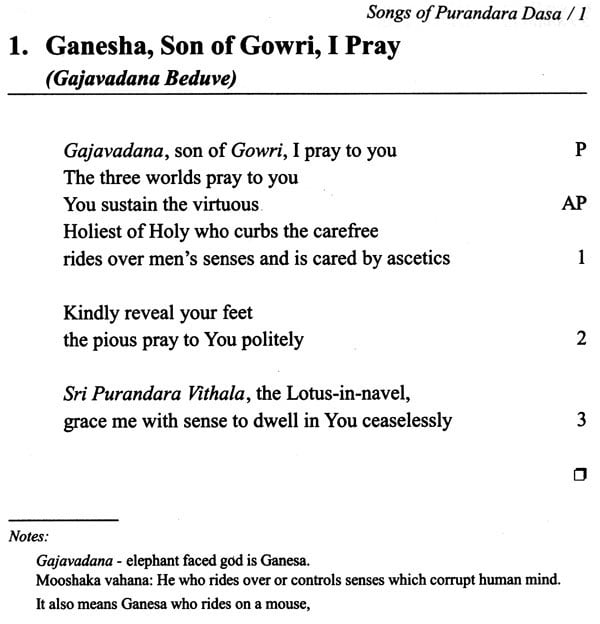 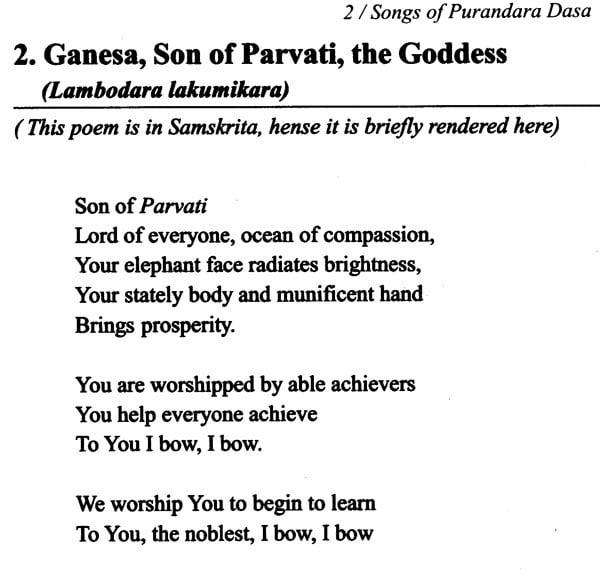 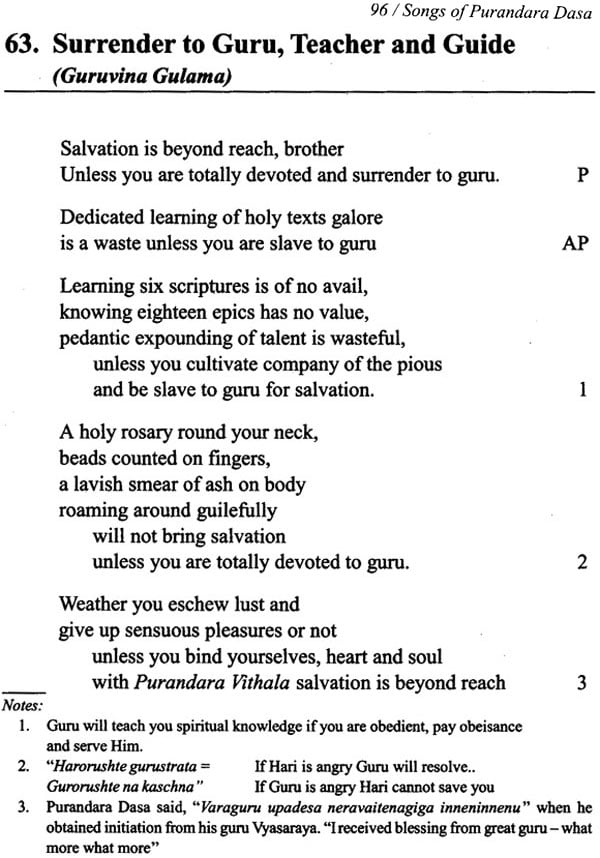 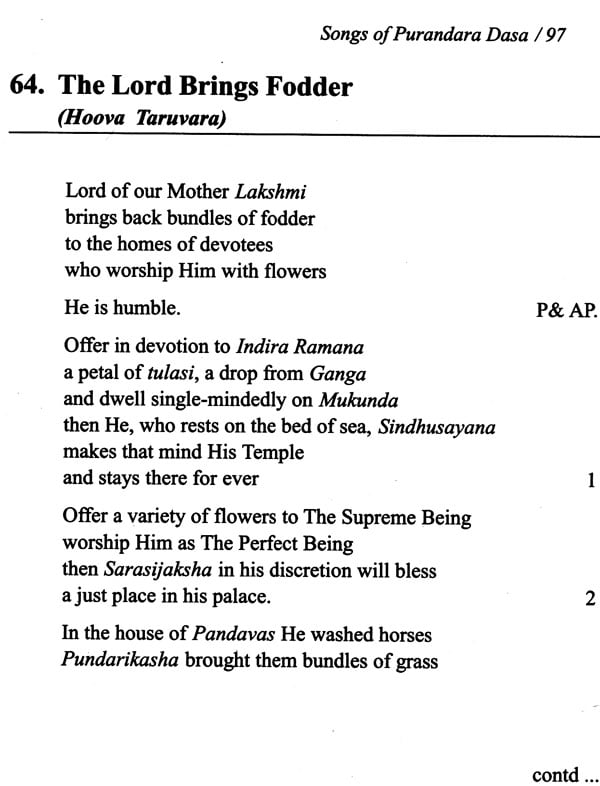 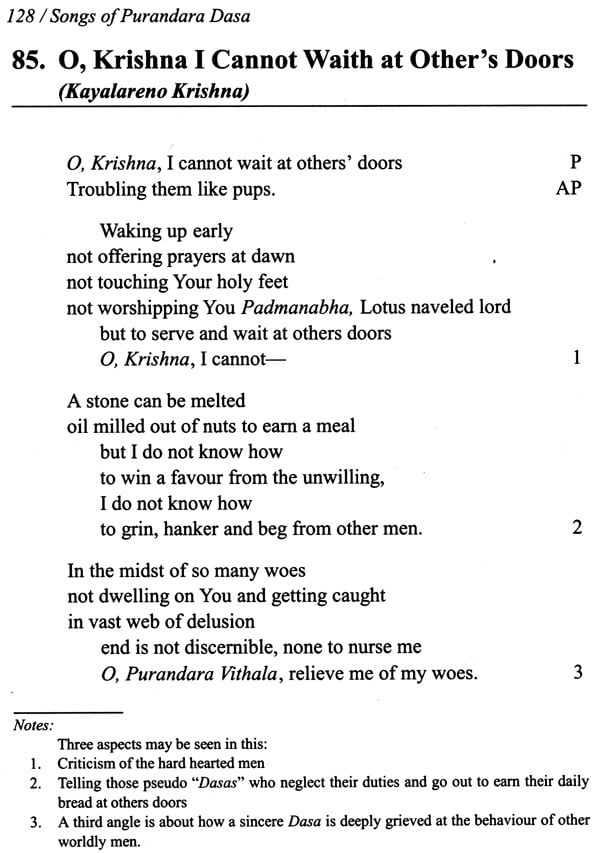 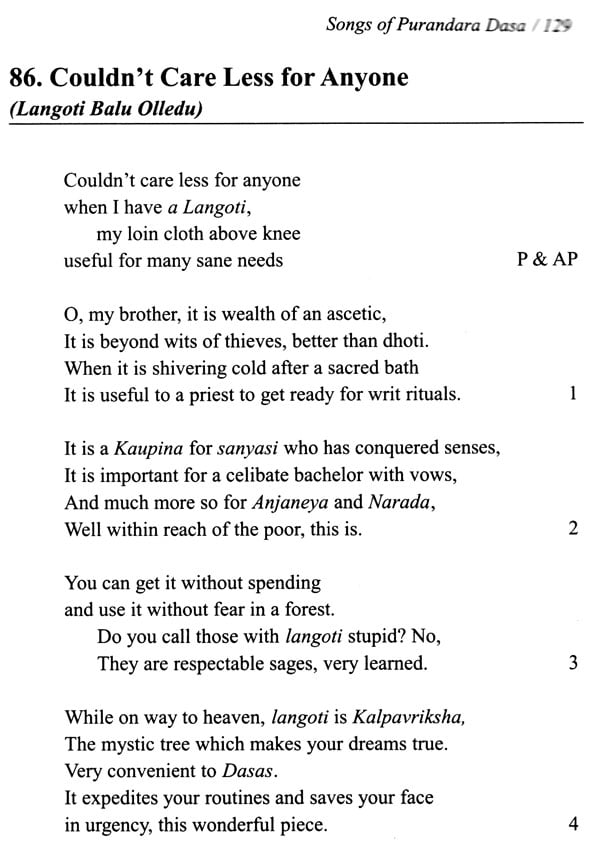 Composers: Cultural Leaders of India
By Ed. By. V. Raghavan
$16