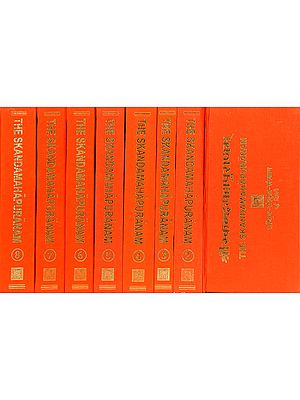 A vast literature available in the form of Puranas, stands next to the Vedas in its importance. It envisages to popularise the precepts, morals and values, propounded in the Vedas. It not only succeeded in its mission but also in completely revolutionising and modernising the Vedic religion. Later and modern Hindu religion is an off shoot of the Pauranic religion. The path of devotion and lordship propounded in the Vedas and the Upanisads as against the path of ritualistic exercises was followed more vigorously in the Puranas. Thus the Puranas freed the religion from the clutches of the chosen few and spilled is over to masses who were unable to understand the complexities of the Vedic doctrines. In this way a socialistic approach is clearly discernible in these ancient treaties, Their prime concern was the common man and not elite section of the society. They were devised as vehicles of the liberal education for the masses. Through the medium of interesting and beautiful stories, episodes and narrations the Puranas presented the abstruse subjects of the Vedas and the Upanisads, so that the common man m!!j be benefited by their study. Hence they have been a great source of the inspiration to the mass-mind especially on religious matters. For the modern Hinduism, the Puranas are religious treatises of divine origin.

A noticeable change can be discerned in the Puranas In social rites and customs, religious traditions and moral and manners from that of the vedas and others. The Vedic hymns of creation, of praise, portraying incidents connected with some ancient Kings, may be taken as the nucleus from which Purana arose. The value of the Puranas cannot be minimized by calling their avowed theme, the presentation of the history of the Guptas up to the end of the 5th Century A. D. Altekar correctly stressed the importance of the Puranas as a source of valuable information for be ancient period of Indian History. He had tried to reconstruct the pre-Bharata war history with the aid of the data available from the puranas. (JBHO IV, p.p. 182-229)

Munshi has made a commendable effort in properly arranging historical events from Rama Jamadagneya to Janmejaya Pariksita on the basis of the Vedic and the Puranic data (B.V. Vol. p.p. 144-155) Smith has fully utilized the Puranic data for reconstructing the choronology of the Saisunaga Nanda and Andhra dynasties. (E.H.I. p.p. 46-47, 51, 230-32) Above all Pargiter in his Ancient Indian Historical traditions opened the treasurer house of Puranic traditions for the use of a student of ancient Indian History. "There is no doubt that the Puranas embody the earliest traditional history and that much of their material is old and valuable.” (A. D. Pusalkar, PLXVI). They give us material for critical study of such diverse subjects as religion and philosophy, folklore and enthology literature and science, history and geography, politics and sociology. (A. D. Pusalkar-Studies in Epic and Puranas, p. 18) Taken collectively they may be described as popular encyclopaedia of ancient and mediaeval Hinduism, religious, philosophical, historical, personal and political matters (Pargiter, Encyclopadia of Religion and Ethis Vol. 10, p. 448).

The different works known by the name of Puranas are evidently derived from the same religious system as the Ramayana and Mahabharata or from the myth heroic saga of Hindu belief. They present however peculiarities which, designated their belonging to a later period and to an important modification in progress of opinion. They repeat the theoretical cosmogony of the two great poems they expand and systematise the chronological computations and they give a more definite and connected representation of the mythological fictions and the historical traditions. They offer characterstic peculiarities of a more modern description, in the paramount importance which they assign to individual divinities, in the variety and purport of the rites and observaece addressed to them and graciousness of those deities and of the efficacy of implicit-devotion to them. Siva and Visnu under one or other form are almost the sole objects that claim the homage of the Hindus in the Purans, departing from the domestic and elemental ritual of the Vedas and exhibiting a sactarial fervour and exclusiveness not traceable in the Ramayana and only to a qualified extent in the Mahabharata. They are no longer authorites for Hindu belief as a whole they are separate guide and sometimes comflicting branches of it, compled for the evident purpose of promoting the preferential or in the some cases the sole, worship of Visnu or of Siva.

In the Vedic literature Purana is mentioned mostly along with Itihasa. The Atharvaveda (XI. 7. 4) and the Brhdaranyaka (II. 4.10) attribute their origin to the residue of the sacrifice and to the breath of Mahabharata respectively-mahtobhutasya nisvasitametadyad rgvedo- yajur-vedah samavedo' that angiras itihasah puranam. Ancient traditions as recorded in the Satpatha Brahmana, chhandogya-Upanisads, Sraut- surta and others unanimously recognise the sacredness of the Puranas by giving them the status of the fifth Veda (Puranampanchamvedanam vedam) But they were always recognised as smrties and not the sruties.

The word 'Purana' has been used in plural number in the Satapatha Brahmana in the Taittiriya-Aranyaka and in the smhitas of Manu and Yajnavalkya. The Mahabharata speaks of a Purana proclaimed by Vayu and the Apastamba- Dnarmasutra actually quoted a passage from the Bhavisyat-Purana. It can be said that prior to Apastamba, Purana stood for a class designation and their number had already begun to multiply. Dr. Pusalkar, Hazara and others have not accepted the hypothesis presented by Dr. Jackson which believed in the existence of a single Purana in the beginning. Nevertheless there appears to be some truth in the hypothesis of Dr. Jackson, as the word had also been used in singular number in the earlier literature.

The Mahabharata advises a person to approach the Veda after having equipped himself with the knowledge of the Itihasa and Purana as the Veda is afraid of him lest he injurs him.

The words like Purana and Puranavid occur in the Ramayana. The works like the Arthasastra of Kautilaya, the Tantra-varttika of Kumarila the prose works of Banabhatta frequently refer to the Puranas. Undoubtedly the Puranas belong to a hoary antiquity-

Many writers have attempted to give an etymological meaning of the word 'Purana', According to Yasaka, Purana is one that belongs to past, yet appears new (Purapinavam bhavati). Panini forms this word by adding 'tyu' suffix to pura (Purana proktesu brahmana kalpesu). The Vayu Purana explains it as that lived in the ancient times (Yasmat pura hyanatidam puranam ten tat smrtam). The Padma-Purana defines it as one that follows the tradition (Pura paramparam vrsti puranam ten tat smrtam). Pargitar opines that the existence of more Puranas than one in Apastamba's time or earlier does not however, mean that the cannon of eighteen Mahapuranas came into vogue at such an early period. As a matter of fact this cannon can scarcely be dated earlier than the third century A.D. The eighteen Mahapuranas occurs both in Svargarohana-parva of the Mahabharata and the Harivamsa. The very fact that Gaudapada and Samkara had refered to the Purana by using a plural number show that they were acquainted with eighteen Puranas Sayana was also familiar with this number. The Puranas themselves are in full agreement with regard to their number and title. Not less than twelve Puranas generally follow the same order of enumeration while enlisting the eighteen Puranas. These lists occurring either in the beginning or at the end of a Purana and forming altogether an independent topic appear to have been added at a later date. The order of enumeration seems to be more, or less stereotyped with a few exceptions. In the Vayu-Purana's list the order is altogether different and the names of only sixteen Puranas are given. The list starts with Matsya and ends with the Skanda and instead of the popular term Garuda and Varaha, Vainteya and Sankara are used. 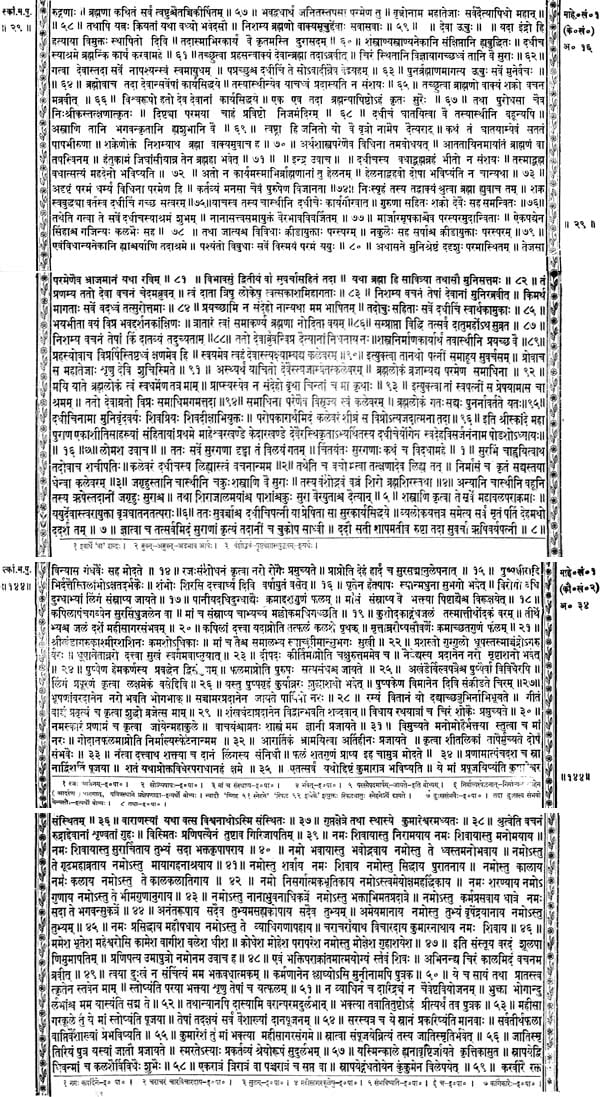 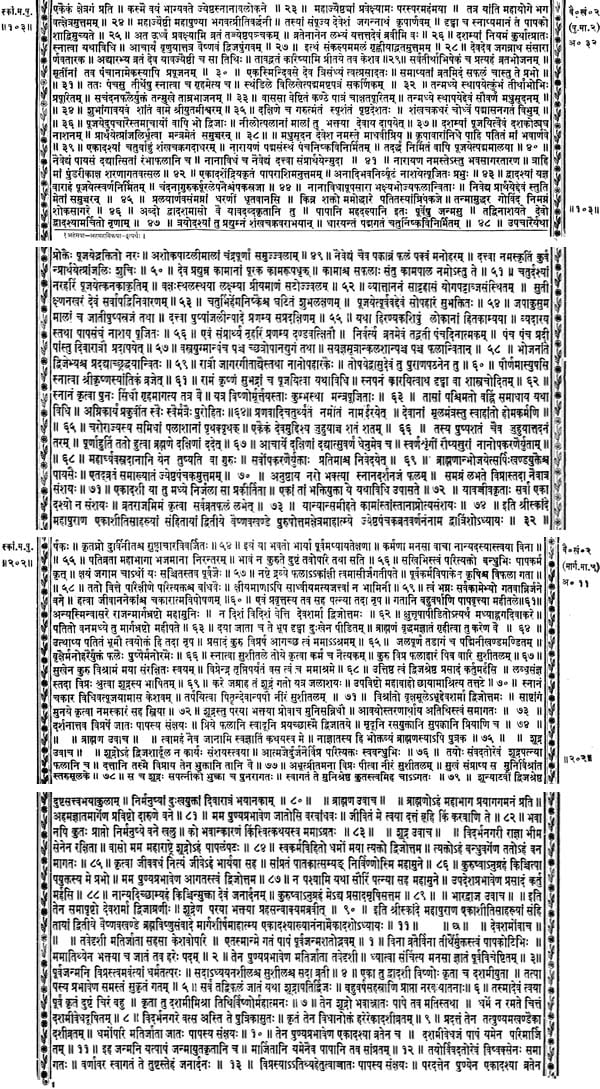 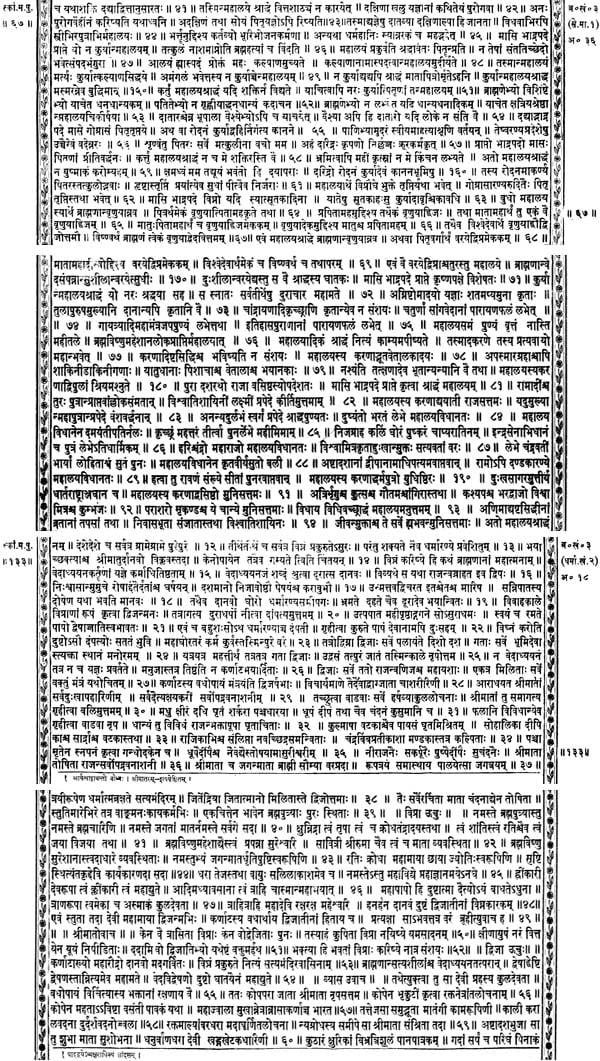 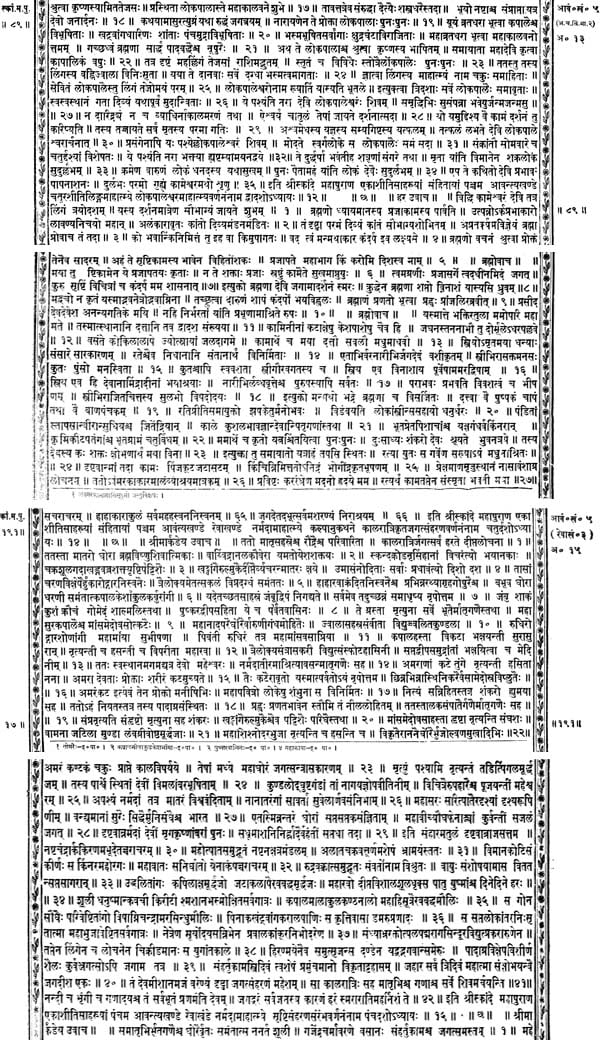 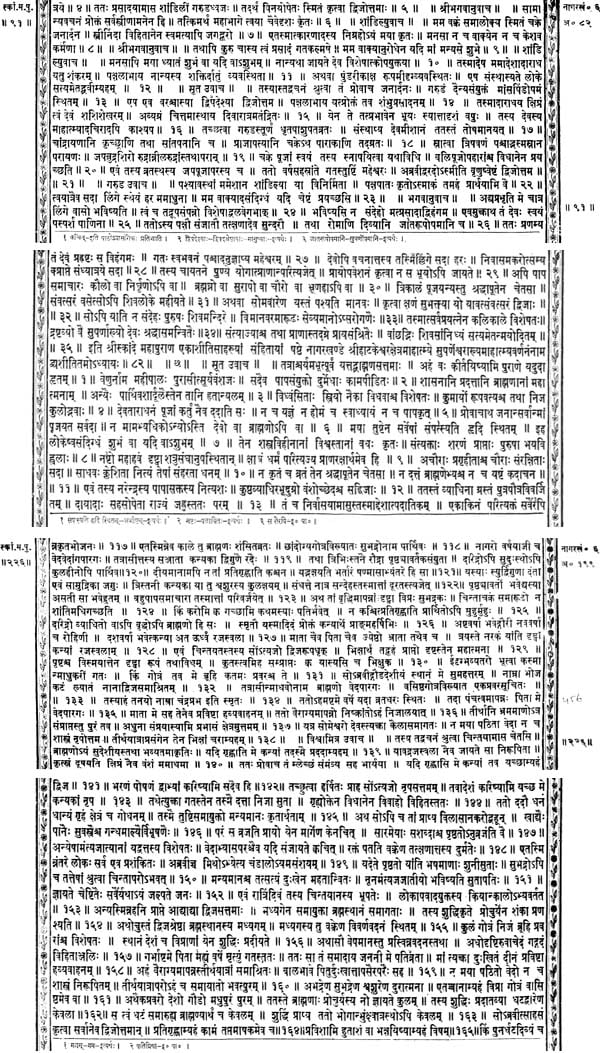 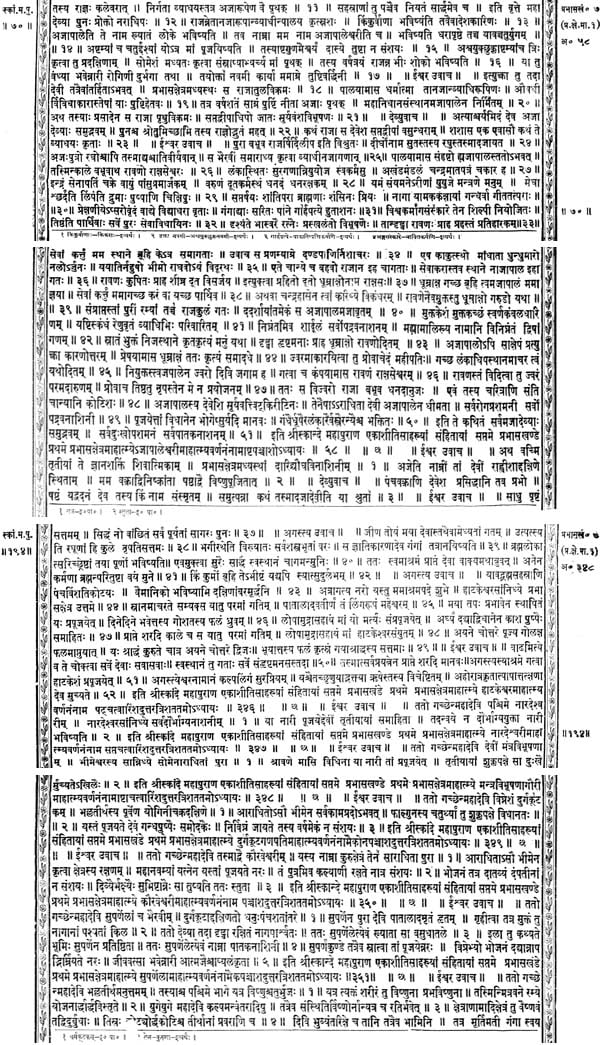 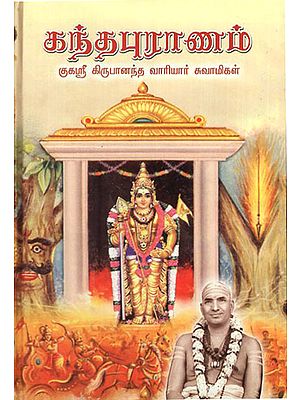 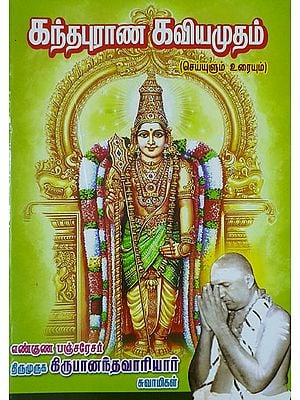 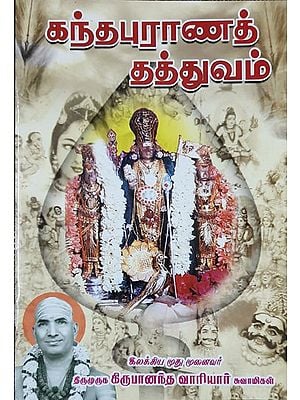 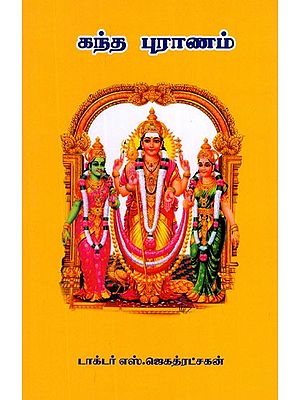 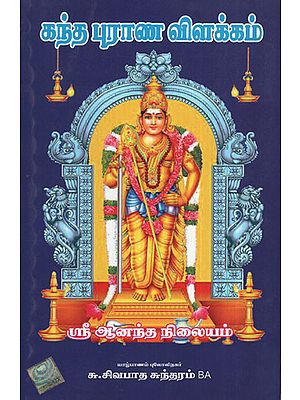 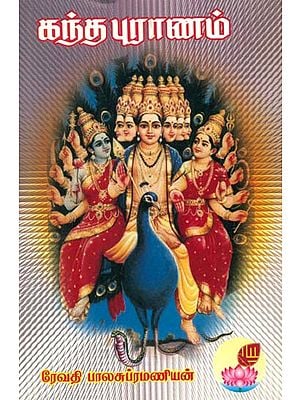 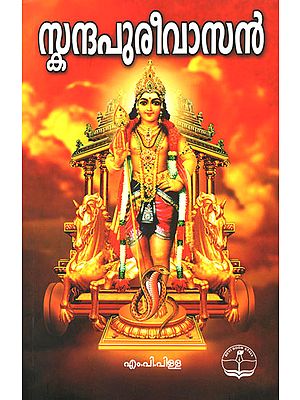 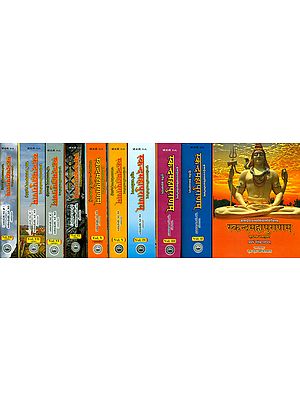 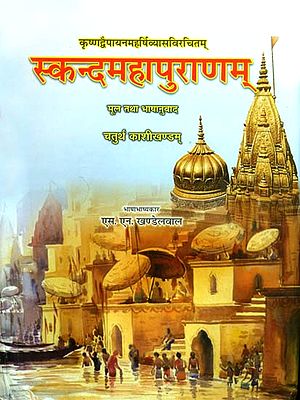 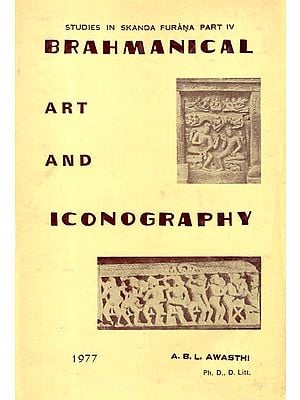 Brahmanical Art and Iconography (Studies in Skanda Purana Part IV)
By A.B.L. Awasthi
$39
Out of Stock 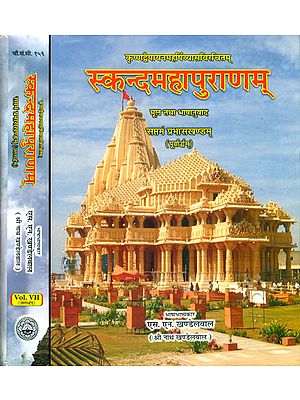 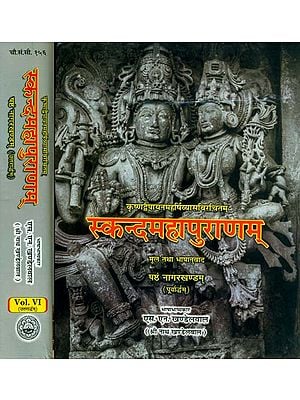