Sivastotravali of Utpaladeva (With CD)

Utpaladeva (late 9th early 10th century) was a great philosopher of the School of Recognition of non-dualist Kashmir Saivism, who established its philosophy on a solid basis with his Isvarapratyabhijna Karikas (Verses on the Recognition of the Lord), and with three philosophical works, the Siddhitrayi. He was the predecessor (Parama-guru) of the great Abhinavagupta. But at the same time he was a mystic of bhakti as we find it here expressed in his Hymns Sivastotravali. For him, bhakti and advaita were not opposed to each other but complementary.

The Sivastotravali is a collection of verses and hymns which are an expression of intense bhakti, longing for the Lord, and the mystical experience of the author and his non-dual union with Siva. They were arranged in 20 chapters or Stotras by his disciples. Of highly poetic quality, these verses belong to the greatest mystical literatures of the world.

Swami Lakshman Joo, the last Saivacarya of Kashmir (1907-1991), combined in himself the great scholar of the tradition of Kashmir Saivism, who taught and expounded its texts time and again to his disciples and to scholars from all parts of the world, and the perfect yogi who had an intimate experience of the spirituality contained therein. He had a special love for the Sivastotravali and expounded it many times in different languages (Kashmiri, Hindi and English). His edition of the Sivastotravali with Ksemaraja's commentary and his Hindi translation remains the standard text. In the present volume his exposition in English is brought out for the first time.

Colonel Ashok Kaul is an alumnus of Government Engineering College, Jabalpur, and Indian Military Academy. A steadfast Signaller who in his long soldiering career has held numerous appointments in the Indian Army including the action-filled stint with the Indian Peace Keeping Force in Sri Lanka and command of two field units in Jammu and Kashmir and in the North-East.

An ardent student of Kashmir Saivism, he has painstakingly attempted to present the current volume of the exposition of an important and revered treatise on the subject in an easy-to-comprehend form keeping deliberately at bay the technical jargon and the convoluted expression.

It is only with the grace and blessing of Guru Isvara Svarupa who was the manifestation of the living Siva that it was possible to render his oral divine teachings into words in the form of a book. Trough godly inspiration some fortunate disciple suddenly has the uncontrollable desire to complete this task and he succeeds to fulfil it.

Our Gurudeva greatly loved the Sivastotravali which was composed by the great master of Kashmir Saiva philosophy Utpaladeva, the author of Isvarapratyabhijna. Swami Lakshman Joo used to recite this text with great devotion and would urge his disciples to do the same. He would reveal the secret and essence of these verses in Kashmiri and world sometimes teach their meaning in English also. Shri Ashok Kaul who is Swamiji's ardent devotee transcribed each word uttered by the divine master and gave it the form of a book at the appropriate time. Ashokji was absorbed in this work for many years. As a result the essence of the nectar of Swamiji's words taught in English took the form of a book.

Shri Ashok Kaul is a senior officer of the armed forces. He has been a Saiva devotee childhood. Being spiritually inspired, he showed interest in Gurudeva's lectures. Having spent several years fruitfully in this task he was able to present this book for the perusal of sincere devotees. Looking upon this book as a gift from Swamiji, one should read it, concentrate on it and reflect upon the mind of Utpaladeva which was beyond mundane mental processes. By testing these verses on the touchstone of his own experience, Gurudeva revealed their secrets in simple words and enhanced their value immensely.

I have read this book from beginning to end and derived great joy from it. As I conclude this foreword may Gurudeva grant Col. Kaul the absorption of awareness. I convey my blessings also lent a helping hand in producing this book.

The current volume in based on the transcription of the explanation of Sivastotravali by Isvarasvarupa Swami Lakshman Joo, the greatest exponent of Kashmir Saivism of modern times.

Sivastotravali is a collection of hymns dedicated to Lord Siva by Acarya Utpaladeva, a great Saivite master intensely in love with Lord Siva and earnestly craving to be one with Him. The book comprises 450 verses arranged in twenty chapters. Each verses is soaked in the nectar of his intense devotion for the Lord and extreme craving for God-consciousness. The book represents his direct and uninhibited one-way dialogue with Lord Siva, projecting his problems, one at a time and seeking His indulgence in getting over these.

Each verses depicts a problem and a request for its revolution. The problem starts in a verses and ends in that verses. The next verses describes yet another problem that he wants to be resolved. He seeks solution of all his problems on the spiritual path, all obstacles on the path to become one with Lord Siva. He is not worried about the problems that stare him in the face on his worldly path. He is ready to face whatever crises come his way in this world but he wants his spiritual path to be obstacle-free.

Gurudeva's extraordinary reverence for Sivastotravali is only too well known. He once said, "Leave me alone in the woods with a feran and Sivastotravali, I don't need anything."

Every attempt has been made not to miss out on any detail and to include all the discussion pertaining to particular verse alongside its meaning and not as separate footnotes. This has been done for ease of understanding and to avoid interruption and distraction. Only explanatory notes have been placed in footnotes.

Every effort has been made to retain the original lucid style, childlike simplicity and the keen sense of humour of Gurudeva. The reader may occasionally find a bit of repetition in the text that has deliberately not been discarded to retain the freshness and the smooth flow of the original text. Those conversant with his unique style would feel as if he is actually talking to them.

At the lotus feet of Gurudeva.

The present book is a unique testimony to the living spiritual tradition of non-dualist Saivism of Kashmir, as it was embodied in its last master, Swami Lakshman Joo. He spent a lifetime with this mystical hymn of Utpaladeva and taught it to his disciples and students at many occasions. His exposition and interpretation reflects his personal experience.

The purpose of this introduction is only to familiarize the reader with the background of the text and its author, in the context of the philosophy of recognition (pratyabhijna).

Utpaladeva (dated circa the end of the ninth-middle of tenth century) was no doubt one of the greatest philosophers of Kashmir who established the school of Recognition or Pratyabhijna on a solid and systematic basis. He was a disciple of Somananda who was really the founder of this philosophy, although he does not use the term pratyabhijna in the technical sense in his Sivadrsti. Therefore the Pratyabhijna School is rightly associated with Utpaladeva and his fundamental text, the Isvarapratyabhijna Karika (Verses on the Recognition of the Lord), and its great commentaries by Abhinavagupta, the Vimarsini and Vivrti Vimarsini. That this school attained recognition far beyond the geographical and historical limits of Kashmir is clear from the fact that it was incorporated by Madhava in his Sarvadarsanasamgraha in the fourteenth century in south India. His philosophical work includes also the Siddhitrayi, namely the Ajadapramatrsiddhi, the Isvarasiddhi, and the Sambandhasiddhi, where he establishes proof for the existence of the Lord and the nature of Consciousness.

But who was this Utpaladeva about whom Abhinavagupta, his grand-disciple, has spoken with such great veneration and respect? Unlike Abhinavagupta who gives many autobiographical details in the long colophons of some of his works, the case is different with Utpaladeva. We only know that he was the son of Udayakara, and his mother's name was Vagisvari, and she is called a yogini. Hence he must have been endowed with divine qualities right from his birth. His family lived in Srinagar, north of Hariparvat, the seat of Sarikadevi. Utpaladeva was married, his son Vibhramakara was also his disciple. This is the scant information about his life.

Ksemaraja, in the introduction to his Vivrti commentary, explains the composition of the Stotravali. He calls Utpaladeva, the author of Isvarapratyabhijna, his paramesthi guru (i.e. paramaguru of Abhinavagupta), and describes him as one "who has always had the direct realization of the Great Lord as his own Self" (satata-saksatkrta-svatma-mahesvarah). From the same introduction we learn, what must have been current knowledge in the tradition at his time, that Utpala composed the Samgrahastotra, Jayastotra and Bhaktistotra (thirteenth, fourteenth and fifteenth Stotra) at the request of his disciples who were desirous of attaining the same state. He calls these ahnikastutisuktani, "Hymns of praise divided in chapters," lit. to be recited in a day (ahnika, as also the chapters of the Tantraloka). The remaining hymns consist of independent verses (muktaka) which his disciples Sri Rama and Adityaraja arranged in some order, and Sri Visvavartta put into the sequence of twenty stotras, giving them titles of his own. He states that this is also the reason why the Samgrahastotra (and the other two composed by Utpaladeva in their transmitted form) have enjoyed traditionally the greatest fame and popularity. This is true even in the living tradition up to the twentieth century, where in the Ishvar Ashram in Srinagar, Swami Lakshman Joo used to teach these stotras and make his disciples recite them regularly.

Since most of these verses were the spontaneous outpouring of their author in states of ecstasy and devotional emotion, they do not follow any logical order or, with a few exceptions, a single theme. The irregularity of metres within was not poetry (of which he was perfectly capable), but the spontaneous expression of his inner experience, which could not be bound even by the exigencies of Sanskrit metre. 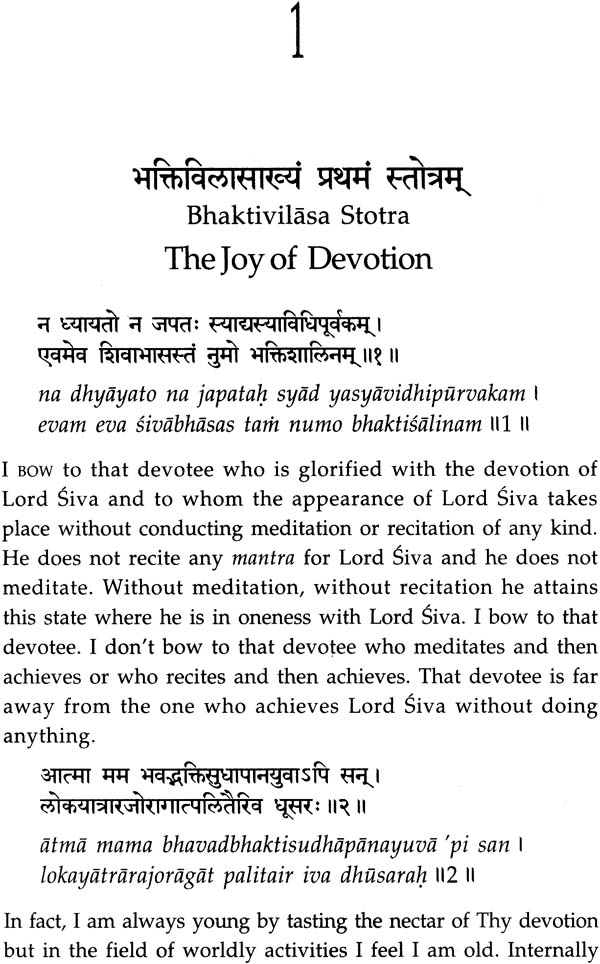 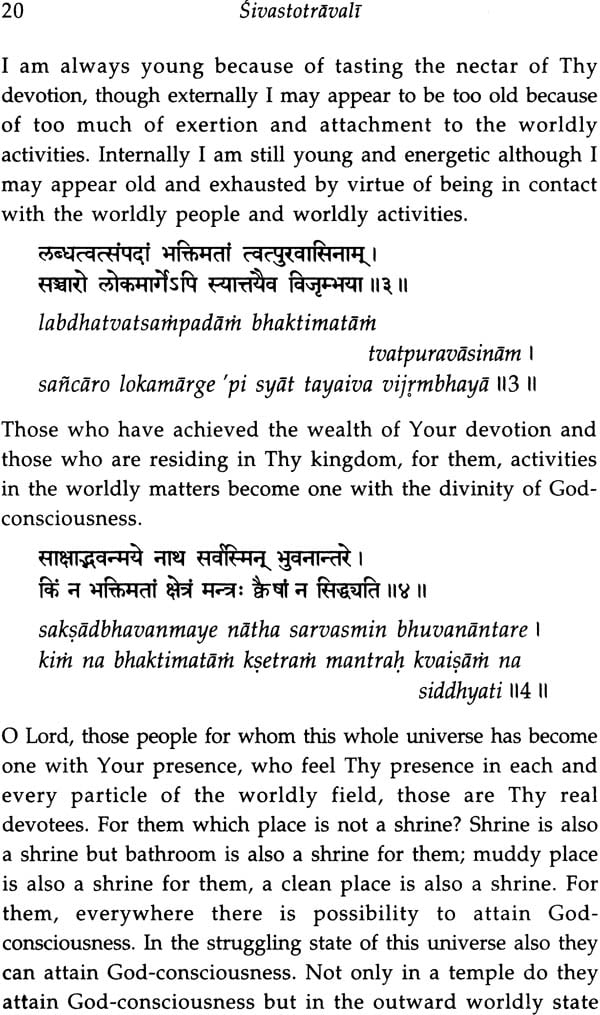 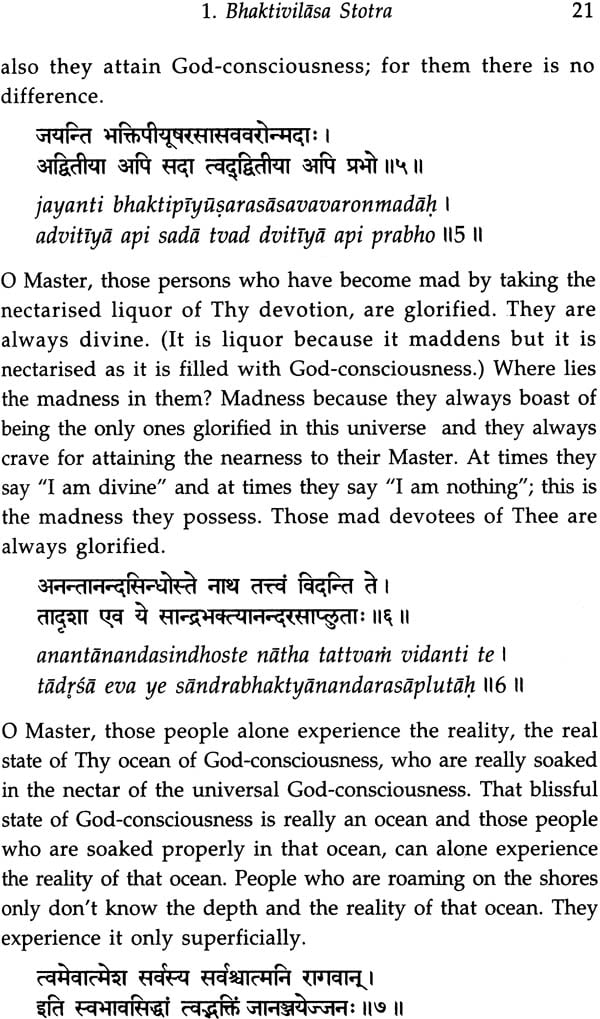 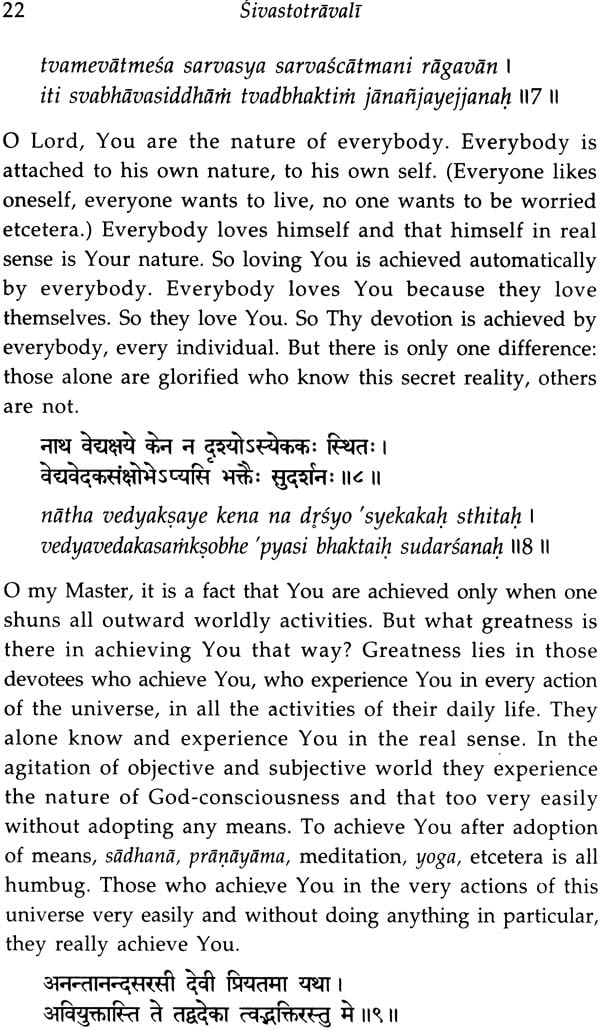 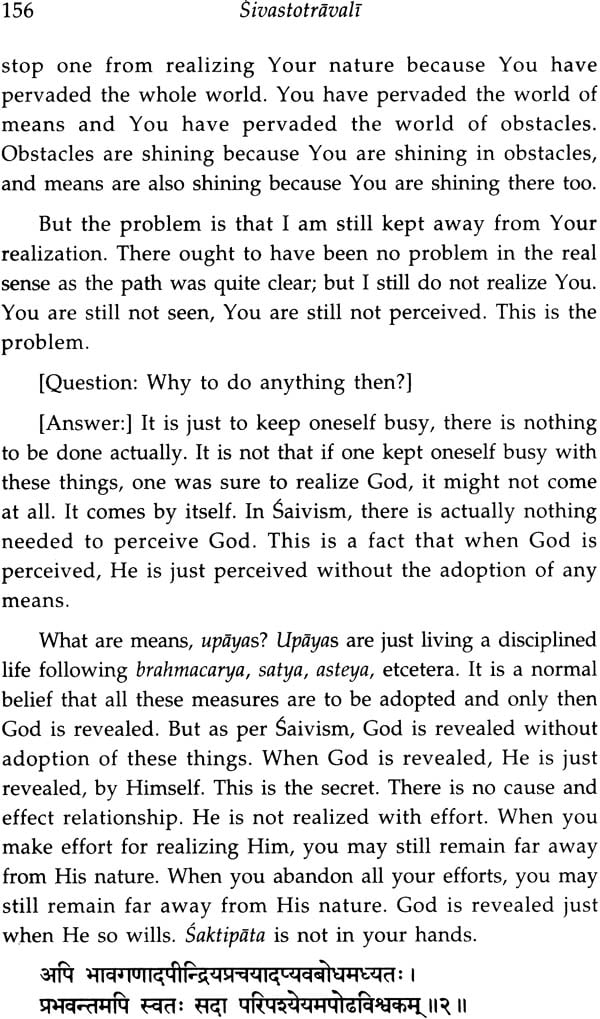 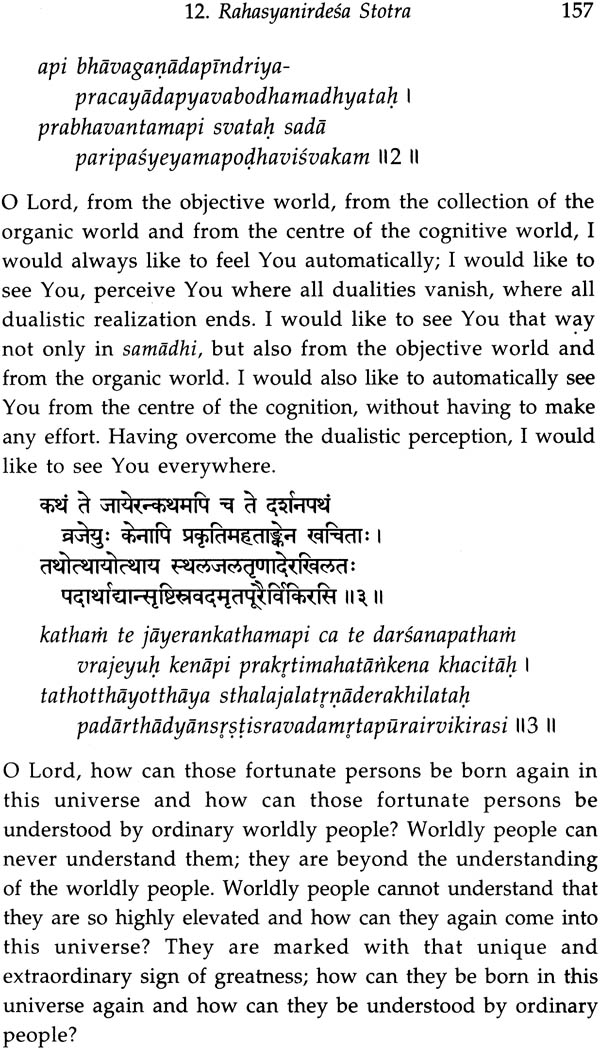 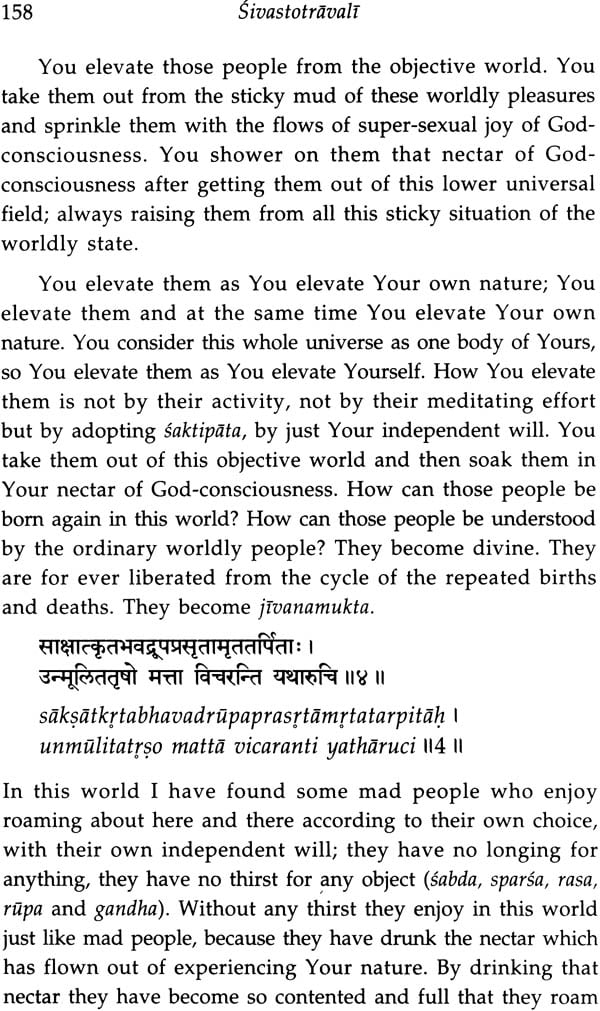 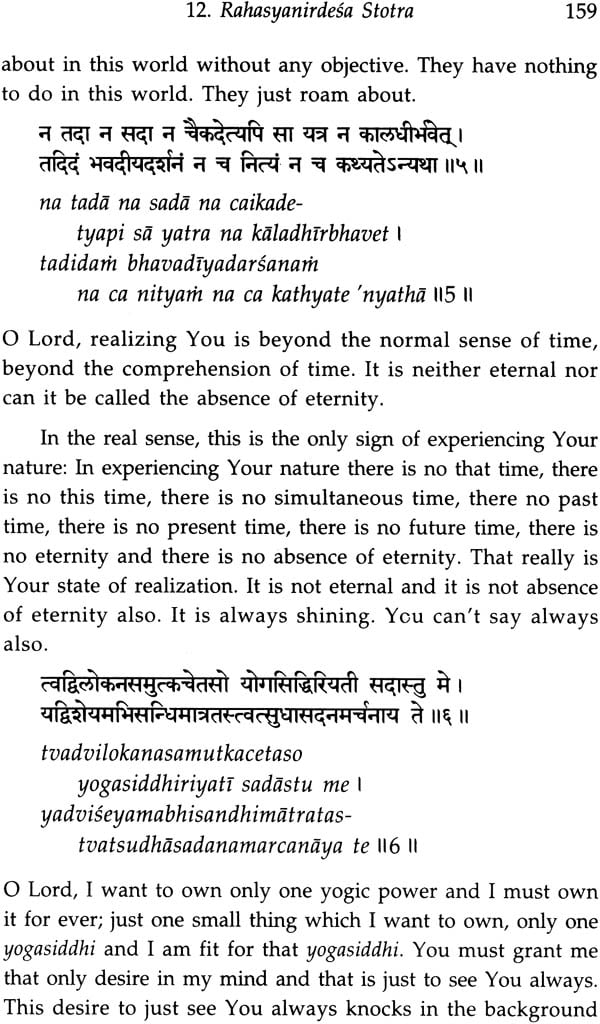 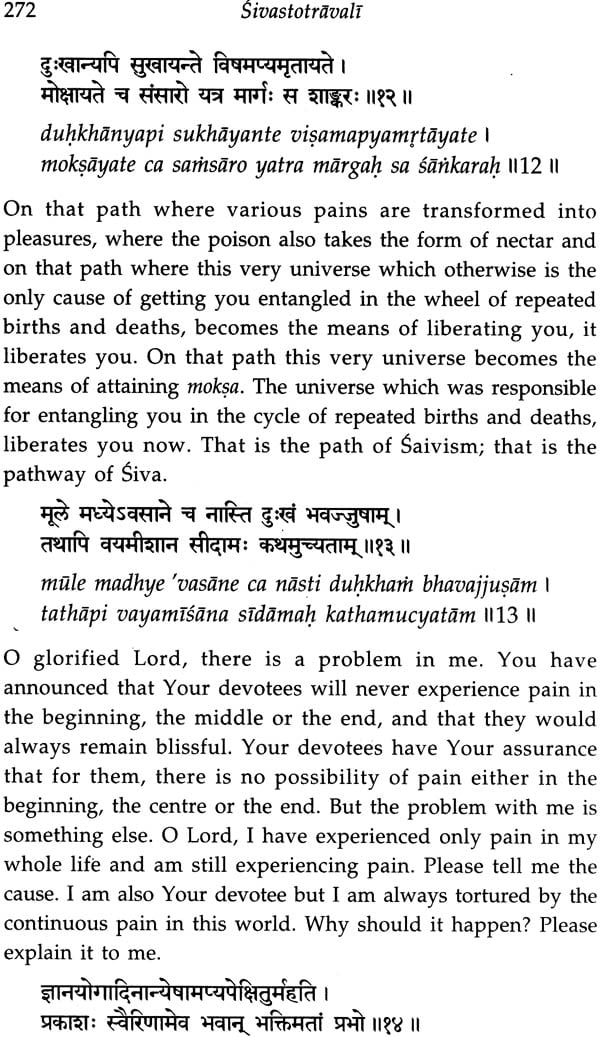 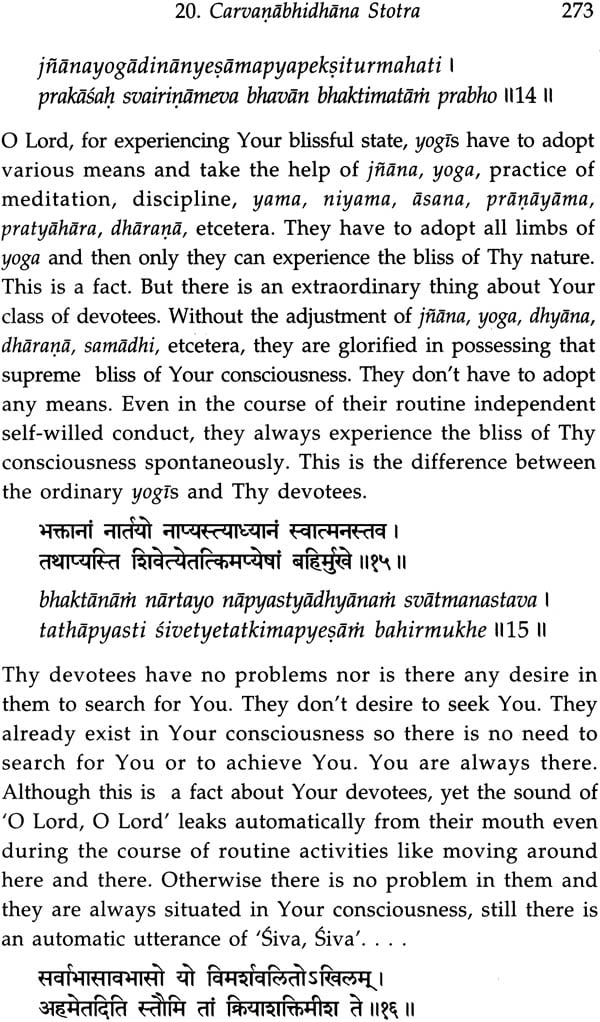 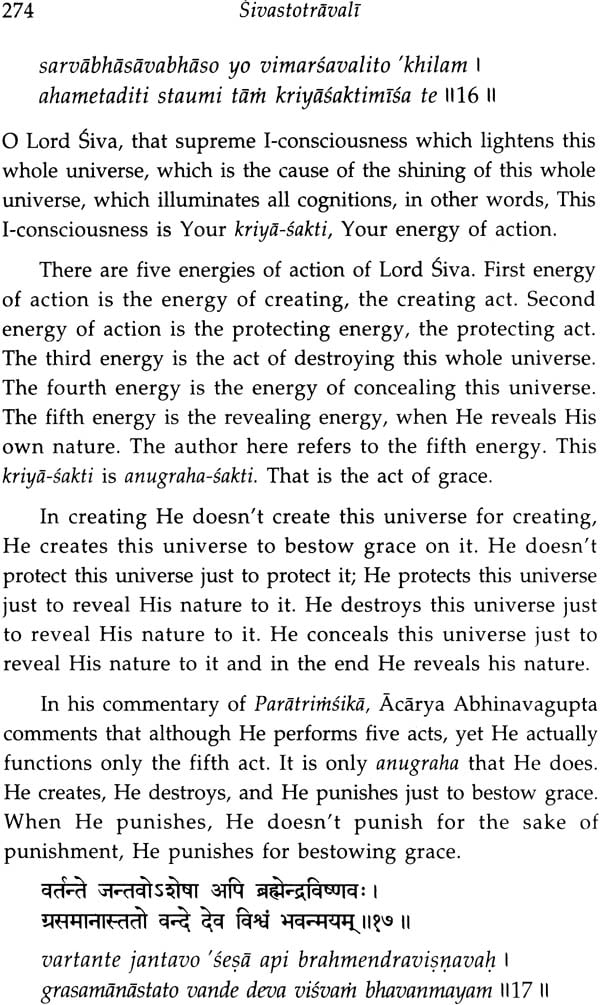 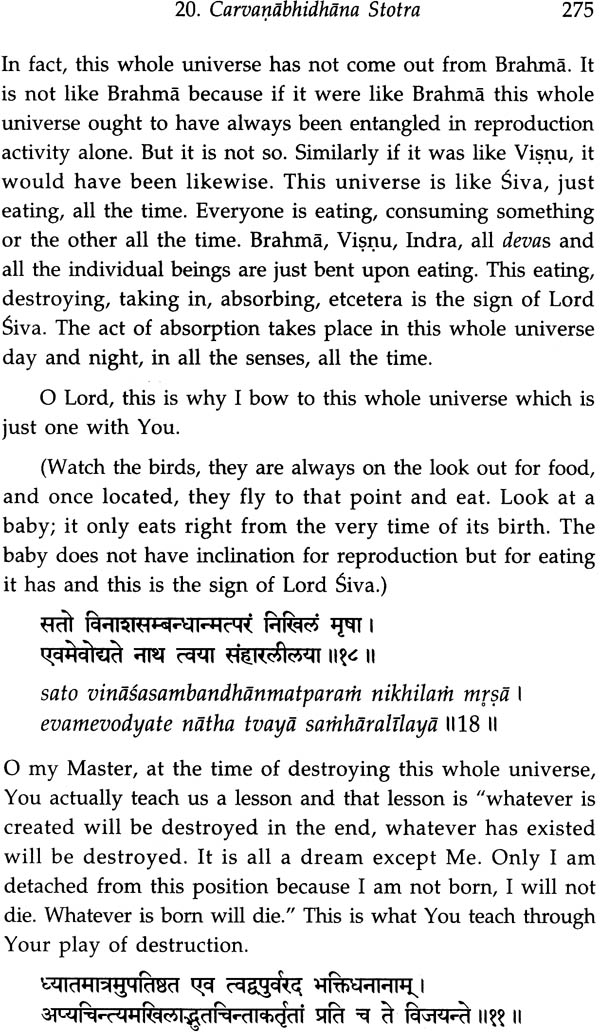