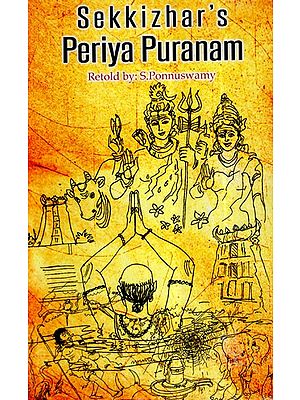 Rendered in simple readable English prose form by an engineer turned scholar, this work is sure to introduce the epic to and enthuse the readers of the present day generation to learn more about it.

S. Ponnuswamy is an engineer and transport planner. He has worked on the Indian Railways in different parts of the India and retired. He has authored or co-authored a few books on bridges and railways. After retirement, his interest in spirituality grew, particularly in Saiva Sidhantha and literature. On reading Peria Puranam, he became an ardent admirer of Sekkizhar and strongly felt a need to propagate his work among the younger generation. To catch their interest, he felt that a rendering of his biographies of the Saints in free flowing English is a desirable step and this book is an outcome of the same.

Thiruthondar Puranam, unlike other Puranas, narrates the life stories of people who lived in more recent period between BCE 300 and CE 865. It covers the life sketch of sixty three ardent devotees of Lord Siva, an appreciation and account of importance of the holy brahmins of Thillai (Chidambaram), the most important and hallowed shrine of Lord Shiva in South. His work contains a total of 4286 verses. The voluminous nature of the work and its literary merit has brought it the name of "Periya Puranam" (Superior/Huge legend).

The poet was born in Kundrathur a small town near Chennai, famous for a hill temple of Lord Muruga. He was born in a Saivite Vellala family with family title of Sekkizhar. He was originally named Arulmozhi Thevar. His father was a minister in the Chola court. His contemporary, the Chola King, Kulothunga Chozhan (alias Anabayan), who ruled in the twelfth century was famous for his fair and just rule. He was fond of Tamil literary works. Impressed by the intellect and character of Shekkizhar, the king appointed him as is his minister.

Though a Saivite by tradition, the king's interest in literature attracted him to a Jain epic 'Seevaka Chintamanc. That work covering the life of a Jain prince, had almost equal mix of interesting poems on divinity as well as on sensual pleasure. Seeing his king distracted by the Jain work, Sekkizhar wanted to turn back the king to the Saivite tradition and advised him that his reading such works would neither help him in this life nor will it lead him to find the way of 'liberation. The minister advised that he should read works like "Thiruthonda Thohai and "Thiruthonda Thiruvandhadi, composed by Sundaranar and Nambiandar Nambigal respectively. The minister explained to him about their merits in recounting the lives of many ardent Shiva devotees, who by their sincerity and devotion had attained salvation and reached the Lord's abode. The king, after going through them, became interested in the lives of the Nayanars and asked his minister to retell the stories in more details in form of an epic.

Sekkizhar accepted the assignment, being an ardent devotee of Lord Shiva himself. He shifted to Chidambaram, to seek Lord Shiva's blessings and guidance. He went to Lord Nataraja's temple and prayed to Him for guidance. The Lord advised him in form of an ' asareeri' (heavenly voice) to start the narration with the word 'ulagellam' (all the world over). Shekkizhar obeyed and started his narration. In fact he has used this term at fifteen locations in all (beginning, middle and end) in his work. On completion of the work, it was made public (arangetram) in presence of the Lord at Chidambaram and intellectuals, saints and others. It is said that the reading commenced on a Chithirai, Adhirai star (the birth star of Saint Thirugnanasambandar' and was completed on the same stellar day the following year.

After this was done, the king honoured the poet devotee by taking him along with the work in a procession on an elephant back round the town. This epic is considered the twelfth (and last) Thirumurai in Tamil, thus equating it with the works of the trinity Appar, Sambandhar and Sundarar and Manickavasagar. It is also considered the fifth Veda (Marai) in Tamil. Though quite a number of the stories contain some unbelievable and some socially unacceptable incidents, they indicate the depth of their devotion and faith in the Lord and their belief that 'there can be no second to the Divine, and all is resolved and redeemed in the burning brazier of His Grace.*

There is enough evidence at different locations in the south to indicate that these Nayanars actually lived there and left some marks. Sekkizhar, as the minister of the Chola king had by himself visited many of the places where the savants had lived and collected information from people and from stone inscriptions. Recently, a well known Tamil writer, Thiru Sivapathasundaram, famous for the travelogues based on his visits to places connected with Lord Buddha and Manickavasagar earlier, had gone round visiting about 100 places and temples connected with the stories of the Nayanars mentioned by Sekkizhar and collected details and evidence by visit to local archives and enquiries from Archakas, temple administrators and local people. He has followed it up with publishing an excellent book in Tamil Shekkizhar Adichuvattil (in the footsteps of Shekkizhar). The book contains a sketch map of the places he visited and route taken from Kalahasthi in north to Ilayangudi, south of Madurai and to Thiruvzhanchuli in south-west. Many photographs connected with some of the incidents also find a place in the book.

The Tamil Saiva Canon comprises of 12 Thirumurais authored by 26 saints, consisting of more than 20,000 verses. Of these, Peria Puranam is the 12th, the last one. This great work, authored by the Minister turned Saint Sekkizhar, runs to 4286 verses dealing with the lives and times of 63 Saiva Saints who served Man and God during the 3rd century BCE to the 9th century CE. The original work of Sundaramurthy Nayanar had only 11 verses mentioning the names of 62 saints. This was followed by a slightly longer version of 100 verses (of which 89 are available) by Nambiandar Nambi which included Sundaramurthy Nayanar also. It is to the lasting credit of Sekkizhar that he went into great detail in narrating the histories of these saints. It is not as if information on these were readily available. Of these 63, only 7 had left (poetic) records of their own search for God. The other 56 did not say or record anything about themselves - they were ardent devotees and that is about it all. Sekkizhar (1113- 1173 CE) was the Chief Minister of the great Chozha Emperor Kulothunga II who requested and encouraged Sekkizhar to undertake this difficult work.

The Administrator- Scholar, coming 300 years after saint Sundarar went round the Southern Kingdom, gathered information by local enquires, examined epigraphs and copper plates, perused local literature and gathered much authentic information on these saints. Coupled with his own knowledge of Saivism and temple rituals and traditions as also the political history of the Tamil Kingdoms and Sangam literature and the Thevaram, he put in great efforts and, with divine blessings, produced this great epic to the delight of the king and his subjects. The 'arangetram 'of Peria Puranam was held at Thillai Natarajar Temple between the 4th April 1139 and 22nd April 1140. After this Sekkizhar himself retired to a saintly life.

The original title given to the work was Thiruthondar Puranam. People so impressed with the work started calling it Peria Puranam (the great epic). G.U.Pope felt that every Tamil student should study it. Scholars have acclaimed it as an encyclopaedic lexicology and literary master-piece. In this connection the observations of Francois Gross- a great polymath - deserve to be quoted "It should be recognised that this work is an exceptional memorial. The examination of its multiple facets reaches the highest standard of Indian Scholarship- an awesome recollection of texts, anecdotes, a feeling for narrative, characters and situations and, all this in the service of a noble cause".

For the last about seven centuries, Saivites kept this in their Pooja Room as Sacred Tamil Vedam and a few verses of the same were recited at the Temple rituals and festivals. Only in the last about 100 years Tamil Scholars studied it, made their own research and published articles conveying its greatness and it started reaching the educated class slowly. The common men and women have only heard about the stories of the Nayanmars in various versions. However, all this changed in the last about 30 years and we now hear about Seminars on Peria Puranam held all over Tamil speaking world with regular classes being held by the academicians and devotional scholars to the delight of students young and old. It is now recognised not only as a biography or a Puranam but also as a revolutionary piece of devotional literature, equally known for its poetic beauty.

Sekkizhar's Periya Puranam is a narrative consisting of 4286 verses, depicting the lives of sixty three ardent and famous devotees of Lord Siva, known as 'Nayanmars'. They spearheaded the Bhakthi movement in Tamil land between the third century BCE and ninth century. While Sekkizhar's is the best known work on the subject, the earliest one, (in the form of short verses, but very brief), was written by Sundaramurthy, a Nayanar himself. It is called 'Thiruthonda thohai'. Periyapuranam is based on Sundarar's composition, although it is a far more elaborate account of the exemplary and deep devotion of the Nayanmars and a graphic description of the land in which they had lived and moved about. It is said that Sekkizhar, who happened to be the chief minister of the Chola king, had sent emissaries to various places and went himself to many to collect details of the Adiyar's lives and used the information in his epic description. On completion of this work, he renounced his office and became an ascetic himself.

Sekkizhar has started his narration with eleven verses as an invocation extolling the virtues and greatness of the 3000 Sivachariars inhabiting Thillai, (Chidamabaram) solely devoted to the service of the 'Dancing Nataraja'.

He then starts with the incident of how Lord Siva came in the guise of an old Vediyar in order to 'enslave' Sundaramurthy Nayanar, who is to be the first and prime chronicler of the lives of the Adiyars. Then follow the stories of others. He concludes with how Sundarar leaves this world and travels to Kailash, the abode of Lord Siva and Mother Uma to resume his services to them.

This work follows the same order in which Sekkizhar penned the narrative except for some minor changes in the events of Sundarar's life. The contents of the original have been compressed to some extent, especially in case of Thirugnanasambandar, Thirunavukkarasar and Sundarar. 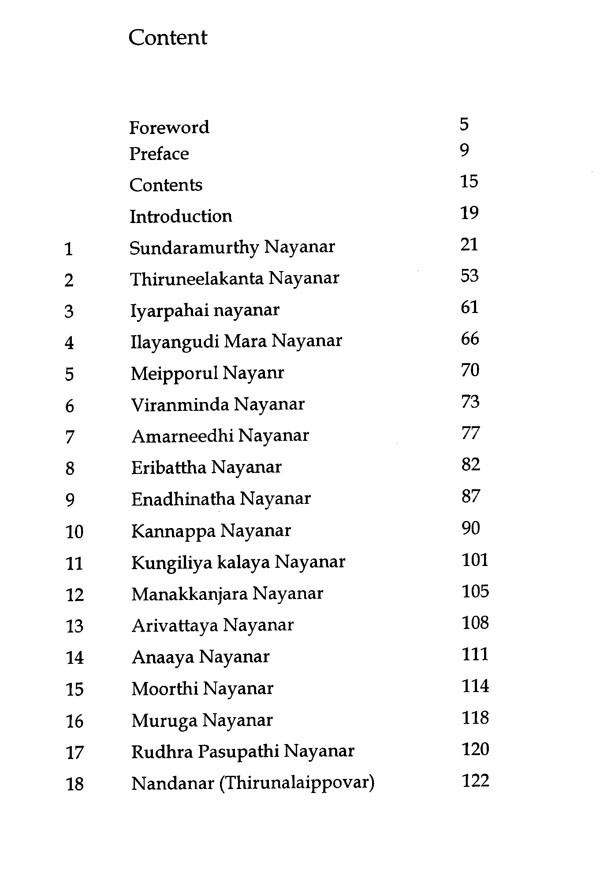 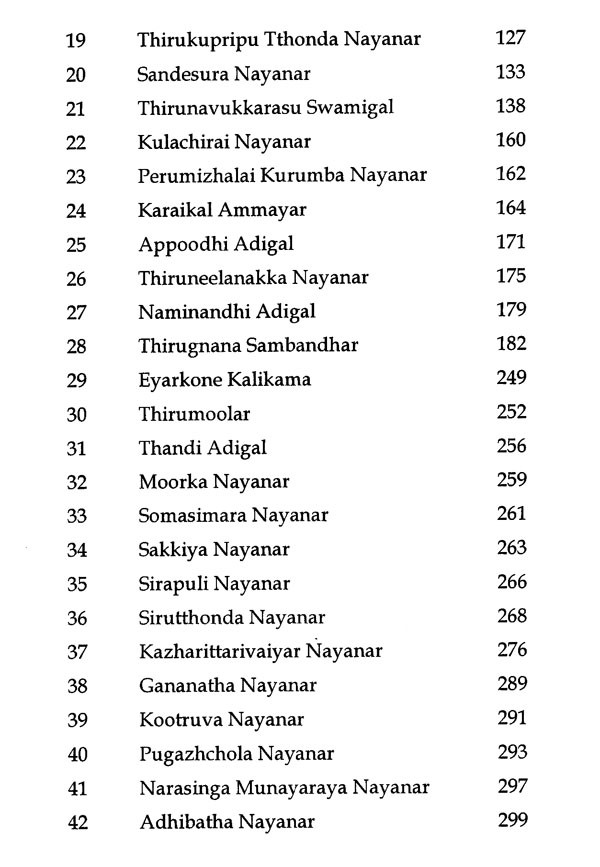 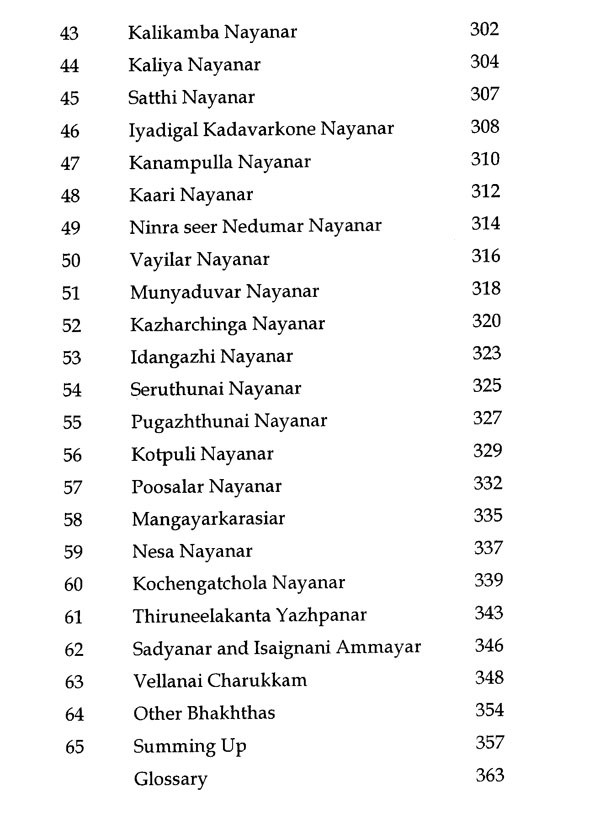 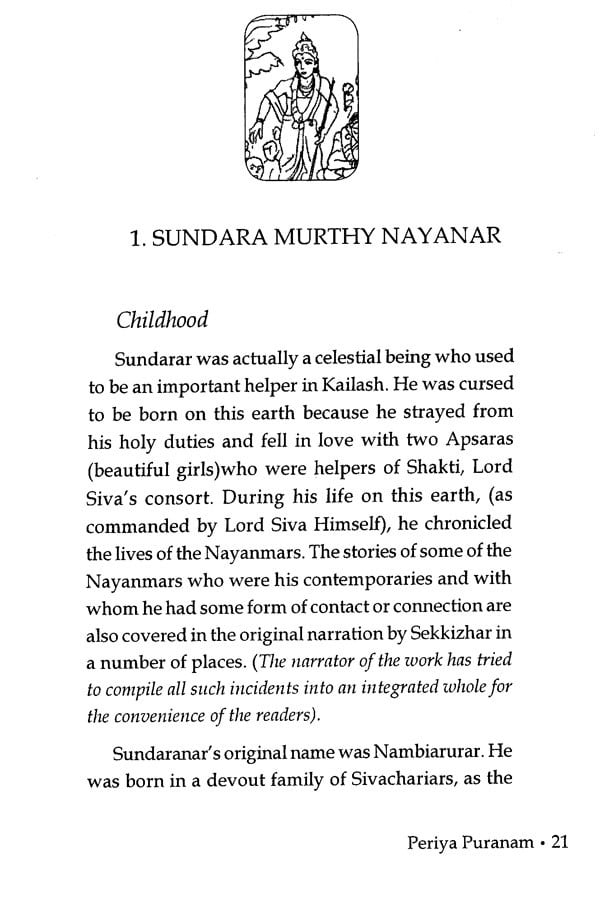 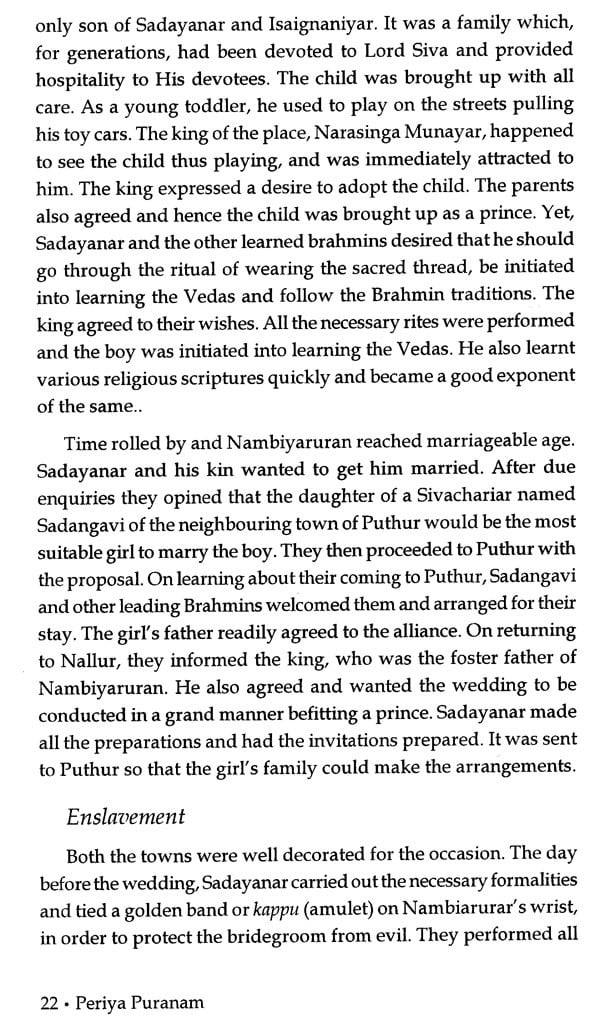 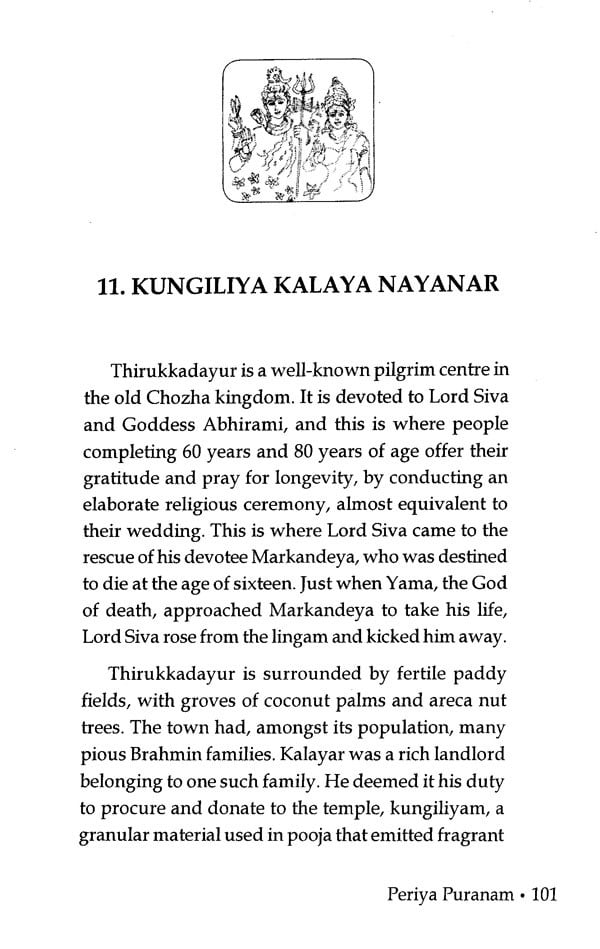 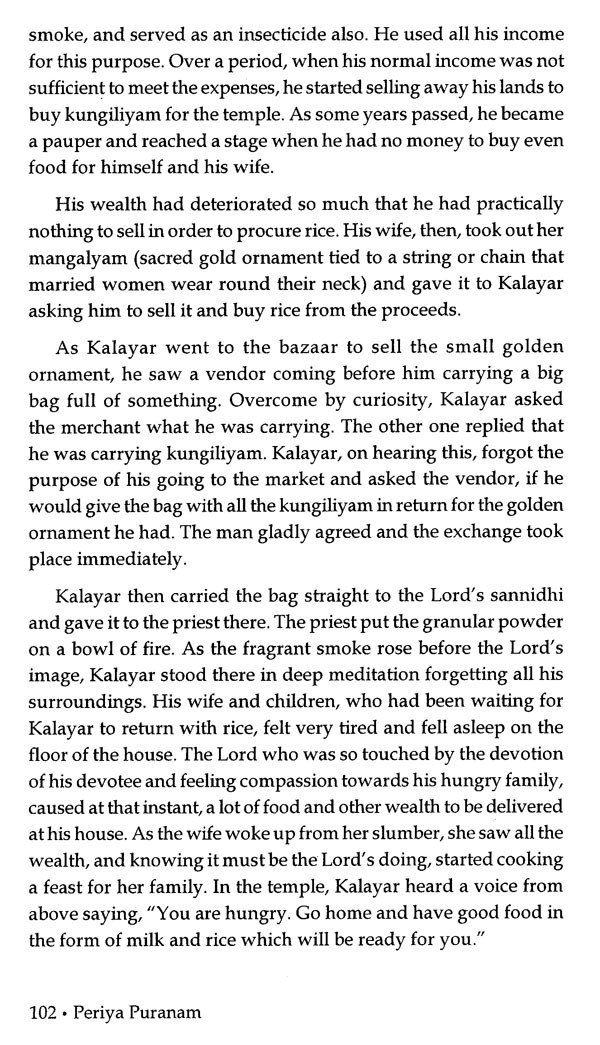 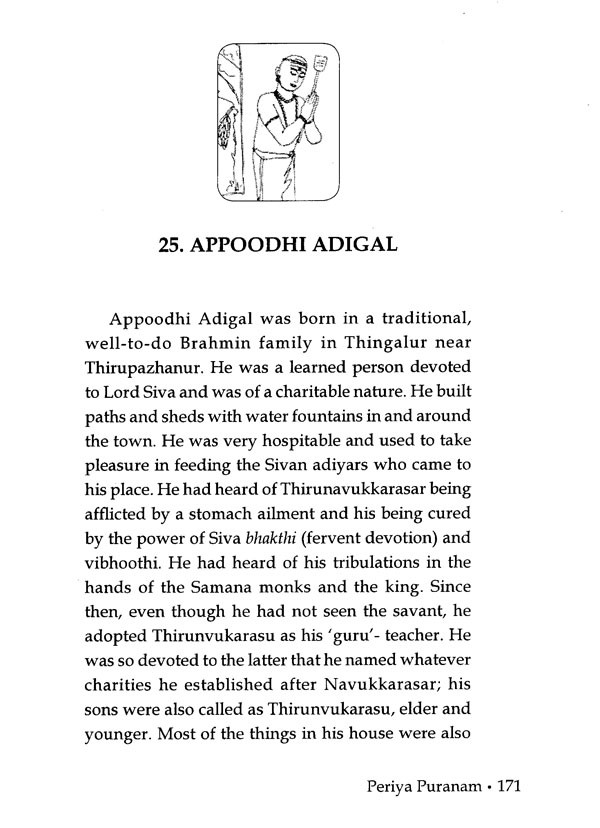 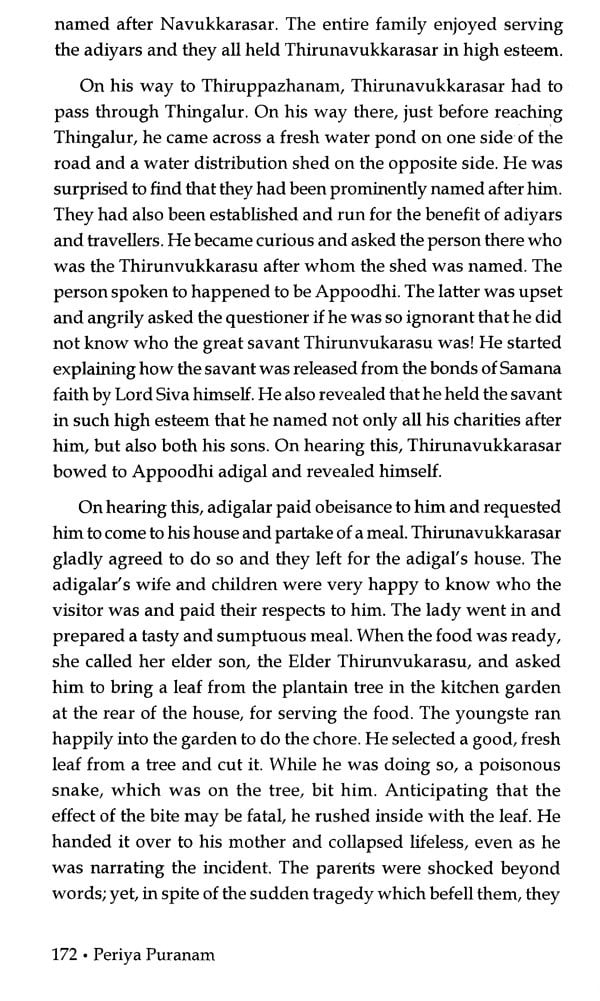 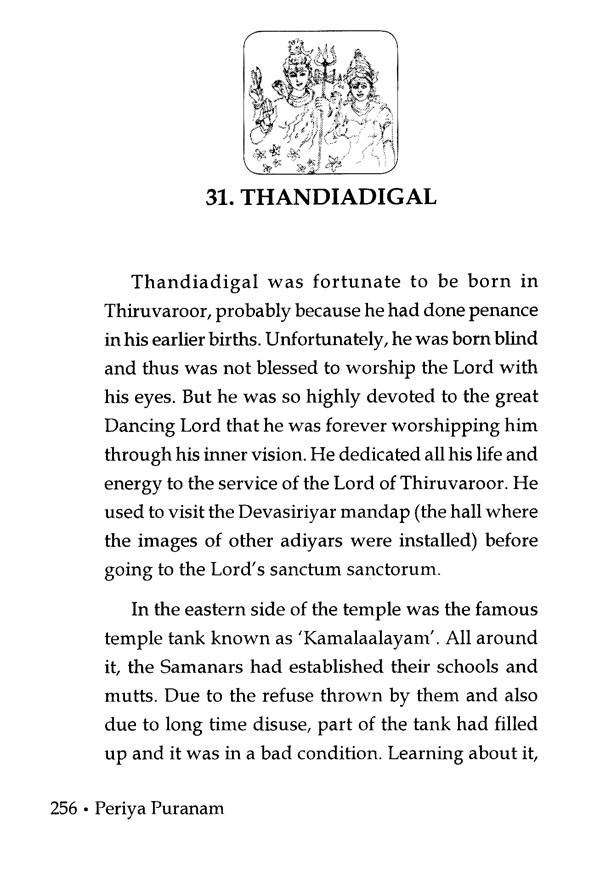 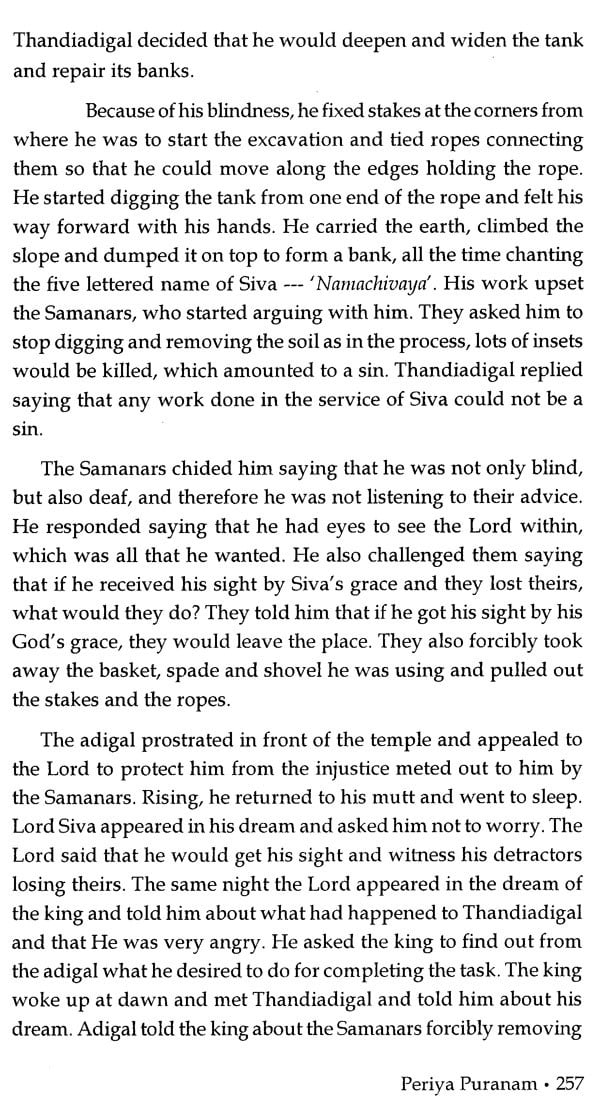 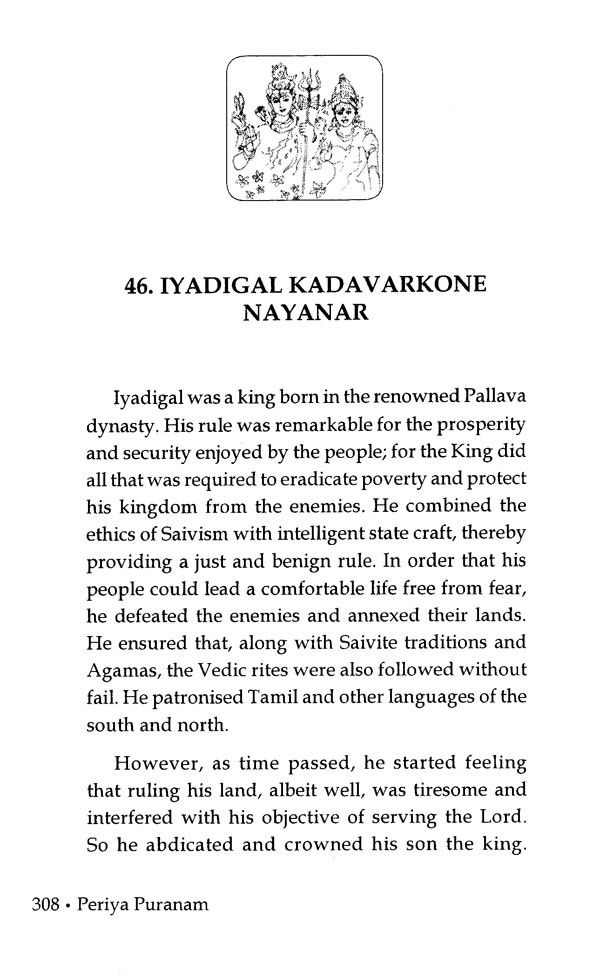 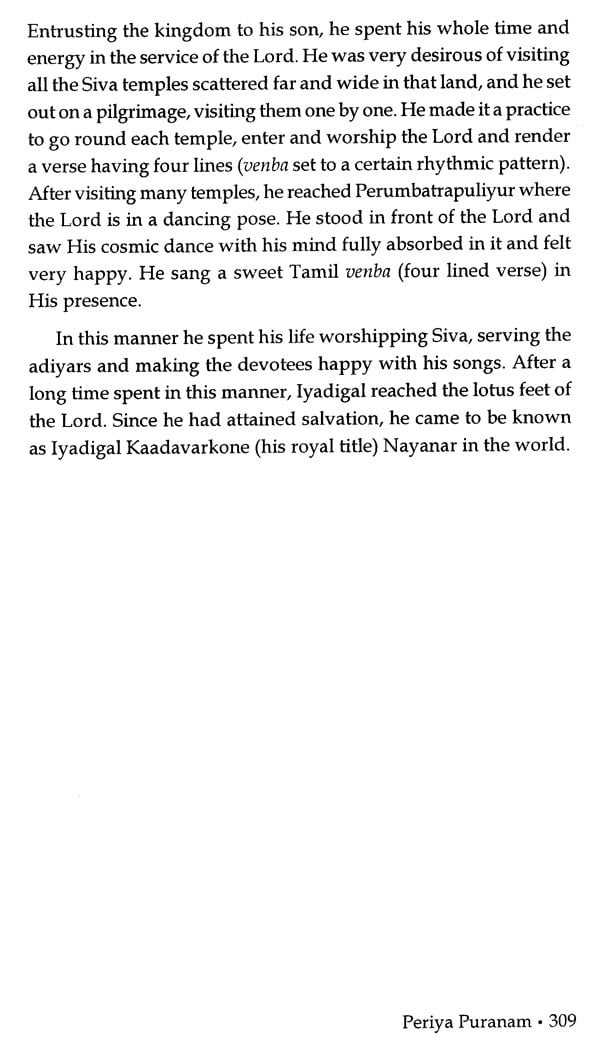