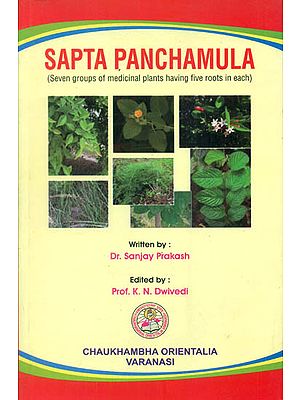 This work deals with indigenous collection about detailed description, pharmacodynamics, pharmacological actions therapeutic uses. The work is in English language (with proper reference/contexts). This work has been presented in one part, enumerating 35 drugs long with detailed description & medicinal properties of Sapta Panchamulas.

The subject matter topics and drugs are required in the subject course of Dravyaguna Vigyana under curriculum of Central Council of Indian Medicine and other studies needs have kept in view. The work is useful as a course as a course book (for graduate as well postgraduate), reference book for higher studies like researches etc. and text book as well as hand book of Dravyaguna used in researches and educational institutions, libraries etc.

Dr. Sanjay Prakash has given more valuable contribution on Ayurveda during the last more than five years. Born on 1st July, 1980, in a small village near Varanasi, in the family with poor background, he acquired M.D. degree in Ayurveda, he was for about three years, as a Medical Officer (Community Health) in Add. P.H.C. Nonari, Jaunpur and later lecturer in Govt. Ayurvedic College & Hospital in Atarra, Banda. Finally he was appointed as a Lecturer, Dravyaguna Department in Govt. Ayurvedic College & Hospital, Varanasi till date.

Dr. Prakash participated in National and International seminar, conferences, workshops and was associated with several sub-committees on Ayurveda on National level. He authored about more than 20 papers.

The knowledge of medicinal plants for the use in the form of diet and drug are very useful. The materia medica and pharmacology are the basis of knowledge of drugs for the purpose of therapeutics. Charaka has said that real expert of medicinal plants is well versed in their use besides their names and forms. Its knowledge has been flowing in two parallel streams-culture-lore and folk-lore. Acharya Charaka, Sushruta and Vagbhata have described well about the properties and action of various medicinal plants. Besides them in Chikitsa granthas and Nighantus also authors have mentioned about Dravya, guna, rasa,vipaka, virya, prabhava and karma of medicinal plants. Here it has been tried to put together all available descriptions regarding Saptapanchamulas.

In this book presentation regarding individual plants includes its botanical name, family name, vernacular names, Sanskrit name, classical name, botanical description of medicinal plants, habit, habitat, origin, chemical constituents, pharmacodynamics, therapeutic uses and doses. In addition to these informations this is also given that plants has been enumerated in which other groups also by CHaraka, Sushruta and Vagbhata. In this way all the possible knowledge about medicinal plants has been collected.

All the credit of this compilation completely goes to my honourable teacher prof. Kamal Nayan Dwivedi, who not only helped to give the direction but guided me at every step.

I can not move a little bit without the blessing of my respected teachers Prof. S.D. Dubey, Prof. V.K. Joshi, Prof. A.K. Singh and Dr. B. Ram.

In the continuation of blessing I would like to express my gratitude to my parents Shri Shyam Lal, Smt. Bhagawanti Devi, My Seniors Dr. Amit Singh and Dr. Shivani Ghildiyal who always blessed me.

This description is collection of drugs only from main reference books, so I am very much obliged to the great scholars who authored those boks. I would like to thank to my wife Dr. Nirmala Devi, my son Master Akreyansh Prakash Singh, Mr. Mahendra Pratap and Mr. Anand Prakash for their helping attitude by all means.

I also extend my special thanks to the Chaukhambha family for the publication of this work.

I hope this compilation will be helpful to not only the students but teachers too. Their may be lacunae in this work, I therefore, would like if those lacunae would be pointed out to me so that in future I could give this book a new look.

On the basis of morphological similarity the roots of the drugs of those gana are used e.g. Dashamula, Trinapanchamula etc. Sushruta the name of 37th Chapter in sutrasthana termed as mishraka adhyaya (Mixed Classification). The classical tradition of ganikarana started from Sushruta.

Bilva, agnimantha, shyonaka, patala and gambhari, these five drugs comes in brihat panchamula. (S.Su. 38. 68). For medicinal uses the roots of these drugs are used and all these are having large tree so they termed as brihat panchamula. (B.P.Ni. Gud. 29). This gana is having laghu guna, tikta, kashaya, kinchit madhura rasa, katu vipaka, ushna virya and kaphavatashamaka, deepana property. (S. Su. 38. 69; also B. P. Ni. Gud. 30).

A group of roots of five small plants i.e., Shalaparni, Prishniparni, Brihati, Kantakari and Gokshura or Eranda is termed as laghupanchamula which comes under Mishraka Varga (group of mixed drugs). It is along with mahat panchamula i.e., Bilva, agnimantha, gambhari, shyonaka and patala, which constitute dashamula, a well known and famous Ayurvedic preparation or as an ingredient of different dosage forms.

Classical texts of Ayurveda differs regarding components of this Mishraka Varga.Four drugs out of five drugs of laghu panchamula are similar in all the Ayurvedic texts, but either Gokshura or Eranda is considered as the fifth drug. So a comprehensive review of Veda, Samhitas, Chikitsa Granthas and Nighantus, on the basis of synonyms, contents, Guna, vipaka, virya and karma, origin of variation in contents and possible thought behind there are two kinds of Lagnupanchamula, so its rational use either Eranda or Gokshura comes under Laghupanchamula was conducted. It was observed that both the traditions were in practice however Acharya kashyapa and Ravi gupta were in view of Eranda as a fifth drug of Laghupanchamula where as Acharya Charaka, Sushruta, Vagbhata, Yogaratnakara and Chakradatta are in favour of Gokshura. Perhaps, the variation in content depends on the need of its use in various diseases.

Vidari, sariva, manjishtha, guduchi and meshashringi, these five drugs comes in vallipanchamula. (S.Su.38.72). All the plants of this group are climbers, so termed as vallipanchamula. Some scholars here consider haridra from the ‘Rajani’ but this plant is not a climber so how it can comes under vallipanchamula. Manjishtha is used in the form of colouring agent so the synonym of rajani is suitable for this. Both these ganas are having the properties and action as kaphashamaka, raktapittahara, shothahara, pramehaghna and shukradoshanashana. (S.Su.38.74, 77).

Sushruta has described all these “Pancha Panchamulas” but Charaka has mentioned madhyama and jivana panchamula in pace of valli and kantaka panchamulas in his pancha panchamulas. 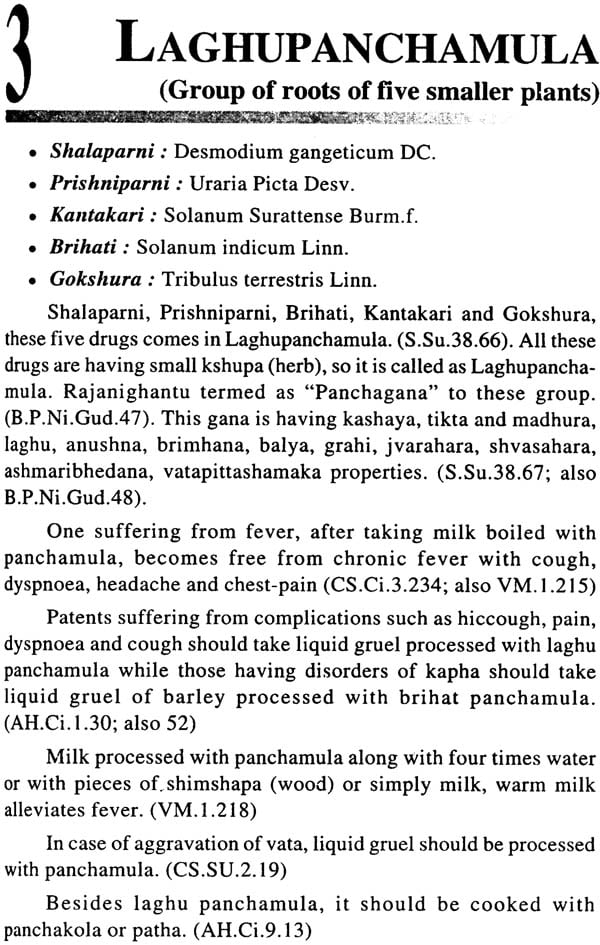 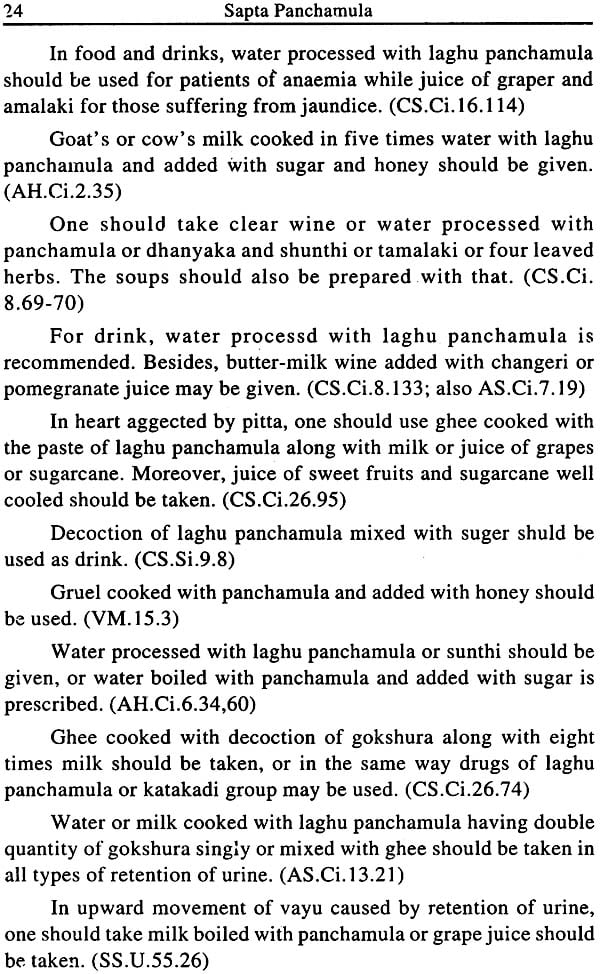 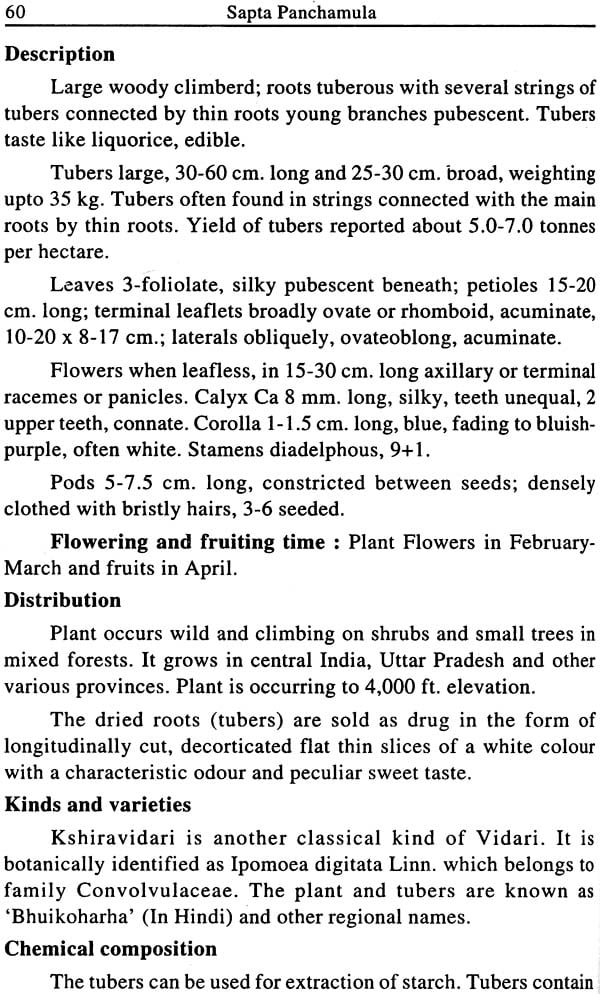 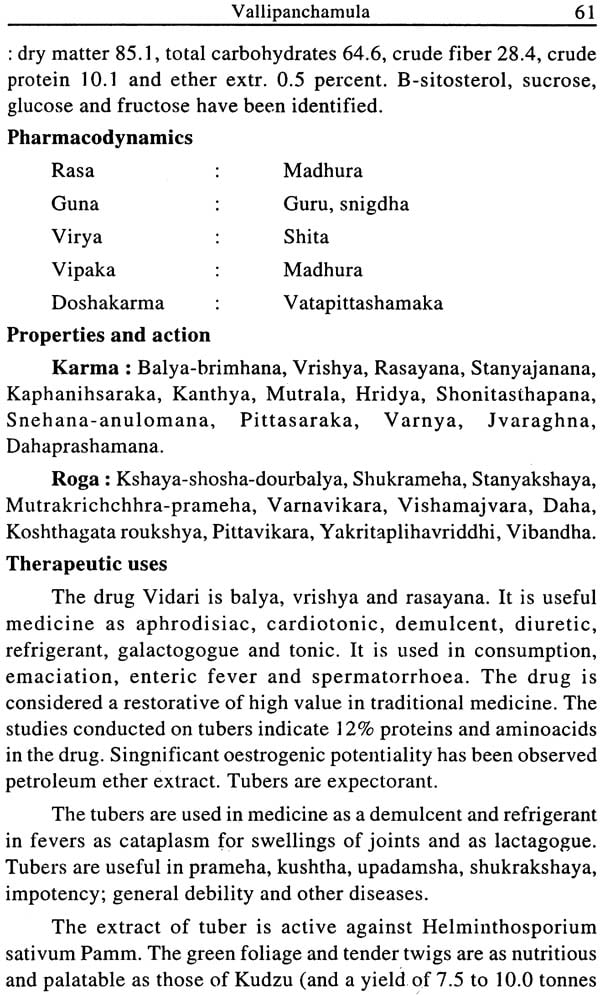 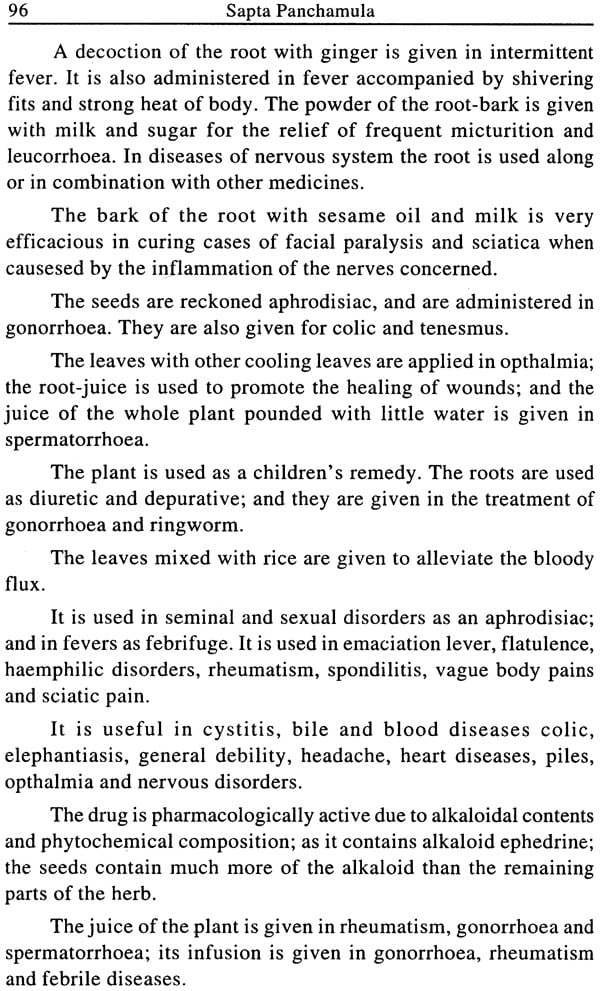 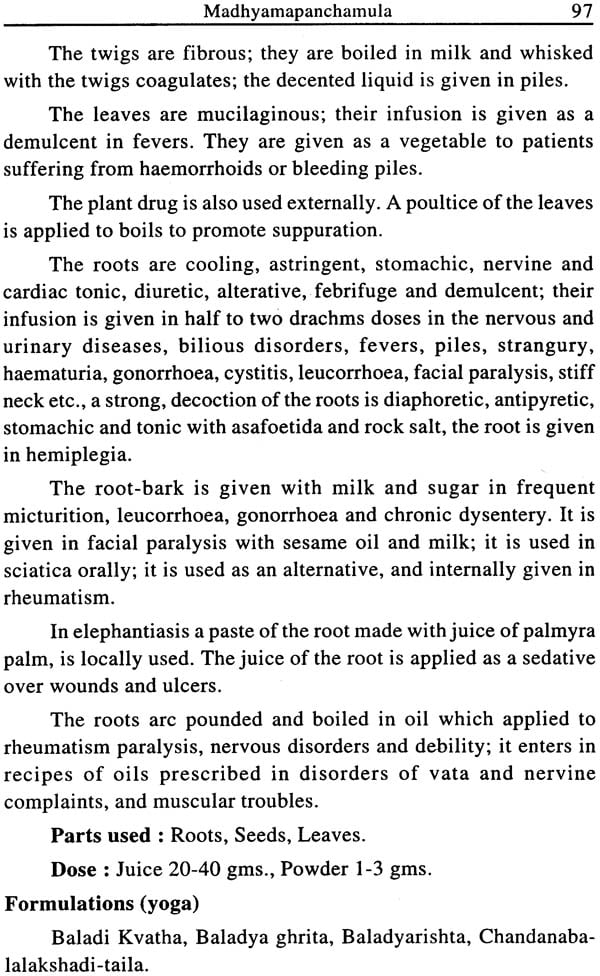 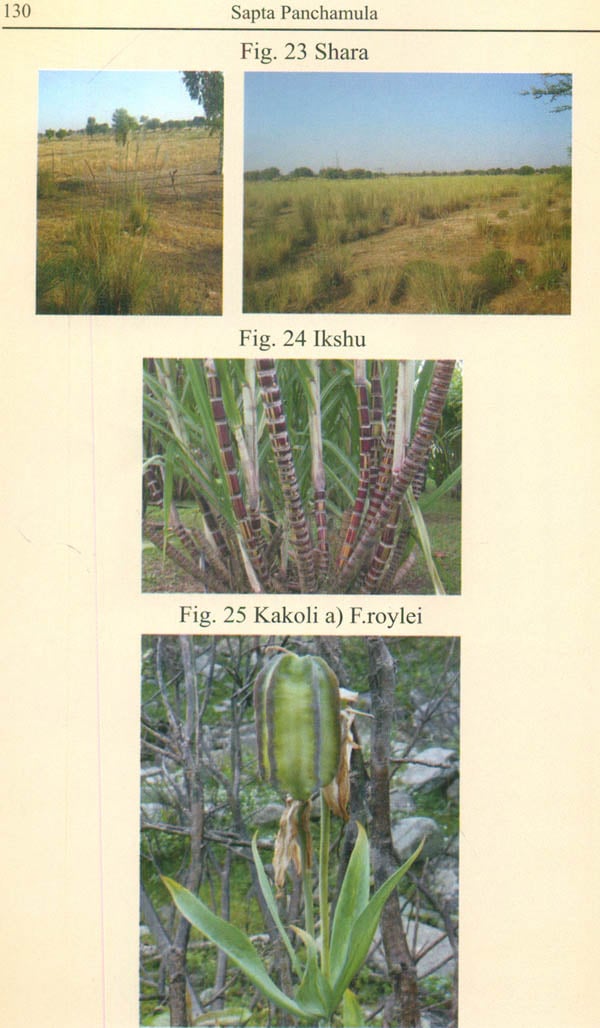 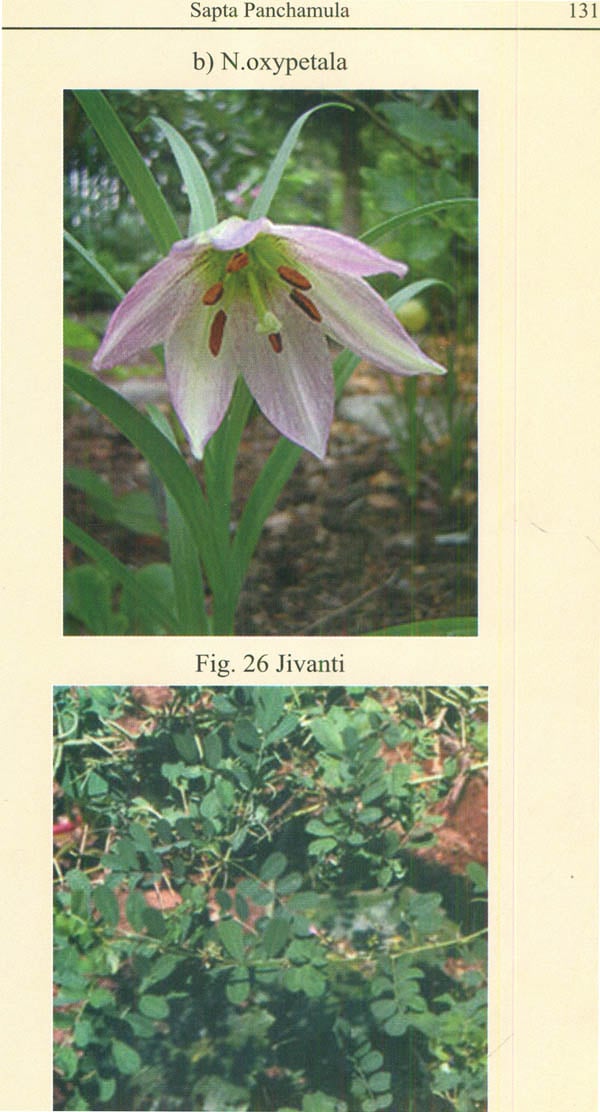 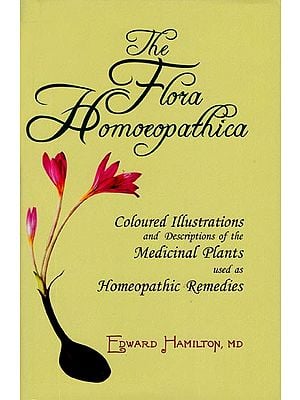 The Flora Homoeopathica (Coloured Illustrations and Descriptions of the Medicinal Plants used as Homeopathic Remedies)
By Edward Hamilton
$31.20
FREE Delivery
$39  (20% off) 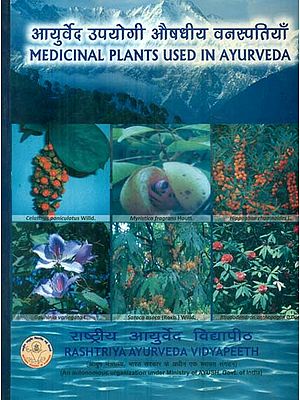 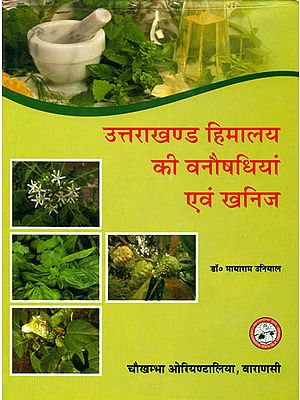 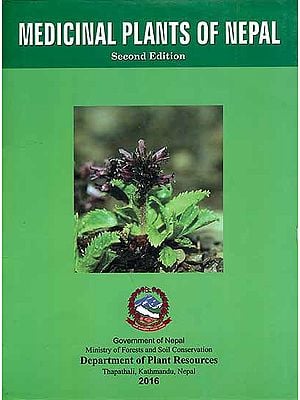 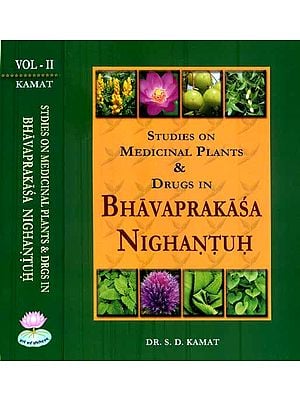 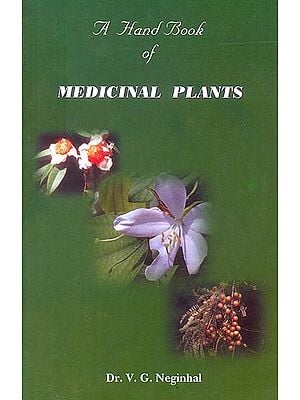 A Hand Book of Medicinal Plants
By Dr. V.G. Neginhnal
$16 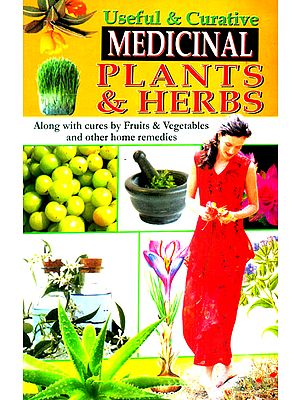