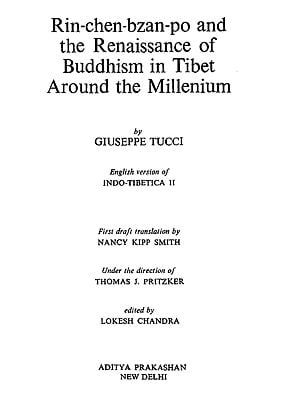 Rin-chen-bzan-po is the key figure in the Later Spread of Dharma after its persecution by Glan-dar-ma in A.D. 901. Due to him it first appeared. in Mnah-ris and later on spread to Dbus and Gtsan. He is famous for his translations of both the sutras and tantras, and extensive explanations of the Prajnaparamita, The Blue Annals says: "The later spread of the Tantras in Tibet was greater than the early spread, and this was chiefly due to this translator (lo-tsa-ba). He attended on seventy-five panditas, and heard from them the exposition of numerous treatises on the Doctrine. Lha-chen-po Lha-lde-btsan bestowed on him the dignity of Chief Priest (dbuhi mchod-gnas) and of Vajracarya (rdo-rje slob-dpon). He was presented with the estate of Zer in Spu-hrans, and built temples. He erected many temples and shrines at Khra-tsa, Ron and other localities, as well as numerous stupas. He had many learned disciples, such as Gur-sin Brtson- grus-rgyal-mtshan and other, as well as more than ten translators who were able to correct translations (zus-chen pher-bahi lo-tsa-ba). Others could not compete with him in his daily work, such as the erection of images and translation of (sacred texts), etc. He paid for the recital of the Nama-sangiti a hundred thousand times in the Sanskrit language, and a hundred thousand times in Tibetan, and made others recite it a hundred thousand times". (Blue Annals 68-69).

"This Great Translator on three occasions journeyed to Kasmira, and there attended on many teachers. He also invited many panditas to Tibet and properly established the custom of preaching (the Yoga Tantras). (Blue Annals 352). In Tibet the system of Jfianapada was first introduced by the Great Translator Rin-chen-bzan-po. The latter preached it to his disciples and it was handed down through their lineage (Blue Annals 372). The widely propagated teaching and manuals of meditation (sgrub-yig) according to the initiation and Tantra of Sri-Samvara, originated first in the spiritual lineage of the disciples of the Great Translator Rin-chen-bzan-po (Blue Annals 380).

"At that time the lo-tsa-ba Rin-chen-bzan-po thought: 'His knowledge as a scholar is hardly greater than mine, but since he has been invited by Lha-bla-ma, it will be necessary (for me) to attend on him.' He accordingly invited him to his own residence at the vihara of Mtho-ldin, (In the vihara) the deities of the higher and lower Tantras were represented according to their respective degrees and for each of them the Master composed a laudatory verse. When the Master sat down on the mat, the 10- tsa-ba (Rin-chen-bzan-po) inquired from him: 'Who composed- these verses?'-'These verses were composed by myself this very instant' replied the Master, and the lo-tsa-ba was filled with awe and amazement. The Master then said to the lo-tsa-ba: 'What sort of doctrine do you know?' The lo-tsa-ba told him in brief about his knowledge and the Master said: 'If there are men such as you in Tibet, then there was no need of my coming to Tibet!' Saying so, he joined the palms of his hands in front of his chest in devotion. Again the Master asked the lo-tsa-ba '0 great lotsa- ba when an individual is to practise all the teachings of Tantras sitting on a single mat, how is he to act?' The lo-tsa-ba replied: 'Indeed, one should practise according to each (Tantra) separately.' The Master exclaimed: 'Rotten is the lo-tsa-ba! Indeed there was need of my coming to Tibet! All these Tantras should be practised together.' The Master taught him the 'Magic Mirror of the Vajrayana' (Gsan-snags-hphrul-gyi me-Ion), and a great faith was born in the lo-tsa-ba, and he thought: 'This Master is the greatest among-the great scholars!' He requested the Master to correct (his) previous translations ....

While Buddhism spread anew with greater purity and its under- standing deepened by the new/sirtras and tantras, Rin-chen-bzan- po realised that the translations of sacred texts alone would not do, and to irradiate the faith temples would have to be built.and would also have to be attractive to draw people. He brought with him artists and craftsmen from Kashmir to embellish temples newly built all over the country. The temples at Tsaparang, tholing, Tabo and elsewhere in Western Tibet bear clear evidence of the craftsmanship of Kashmiri masters. The murals of Mail- nail temple are the only surviving frescoes of the Kashmiri idiom known today. There is a sharp distinction between the school of Guge and the school of Central Tibet, in spite of the same spiritual world. While Guge leaned on Kashmir because of geographic proximity, Central Tibetan schools were influenced by the Pala and Nepalese idiom (Tucci 1949:1.272-215). 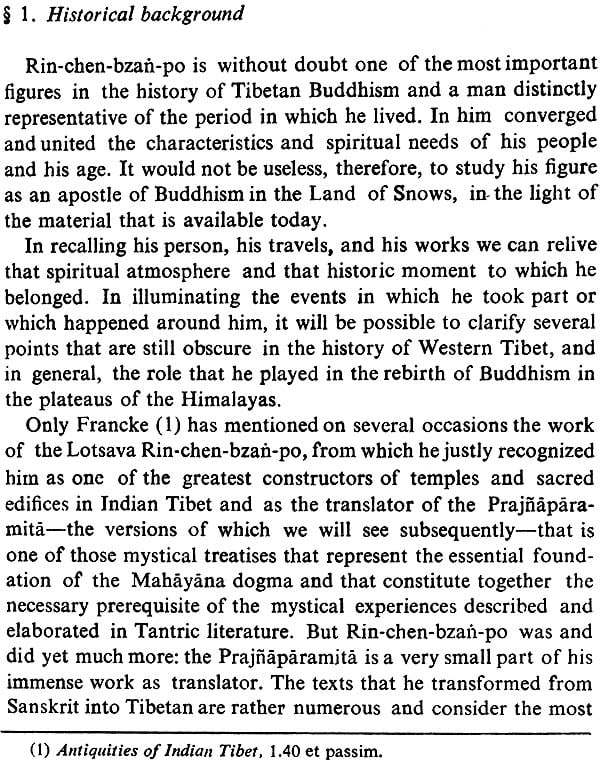 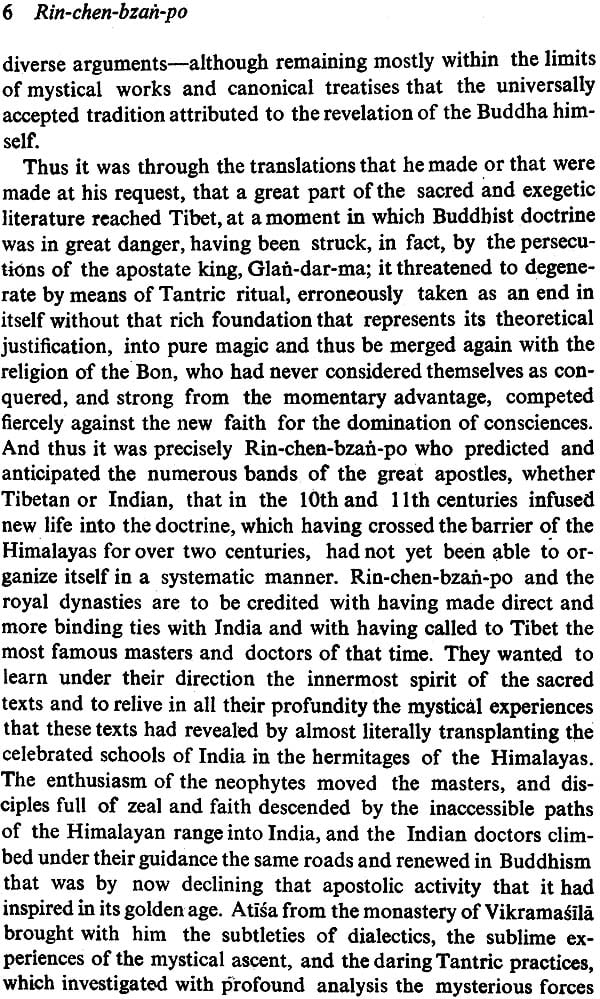 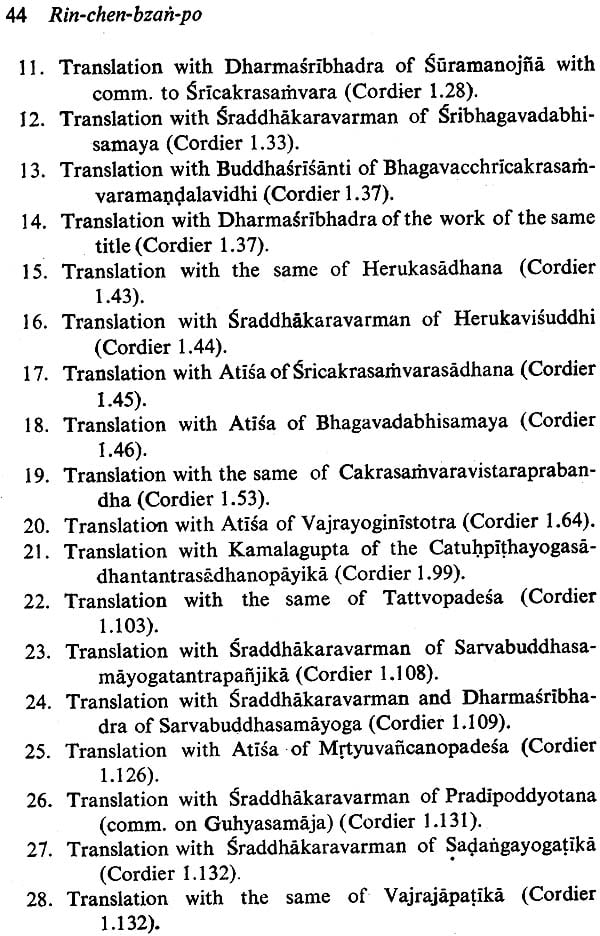 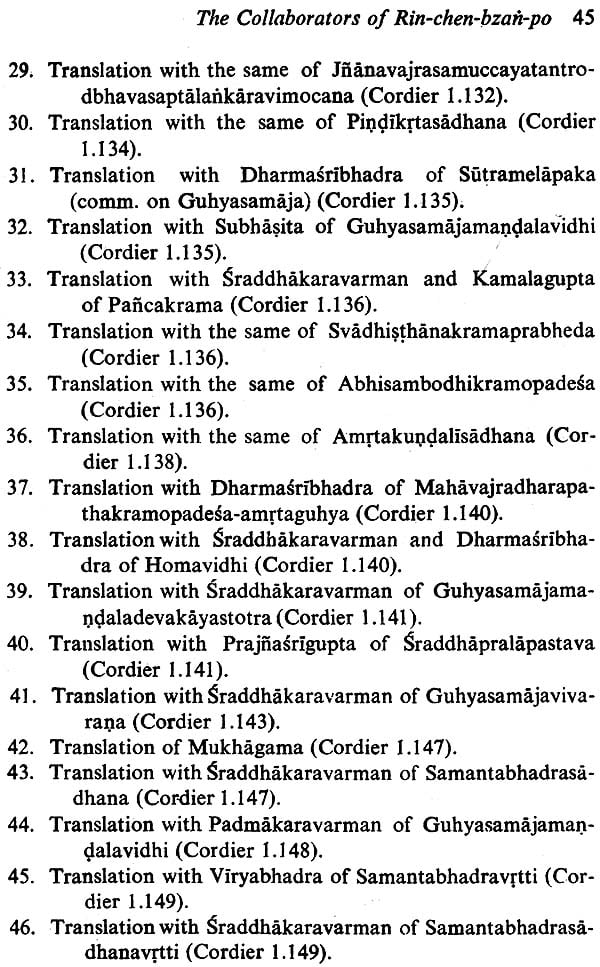 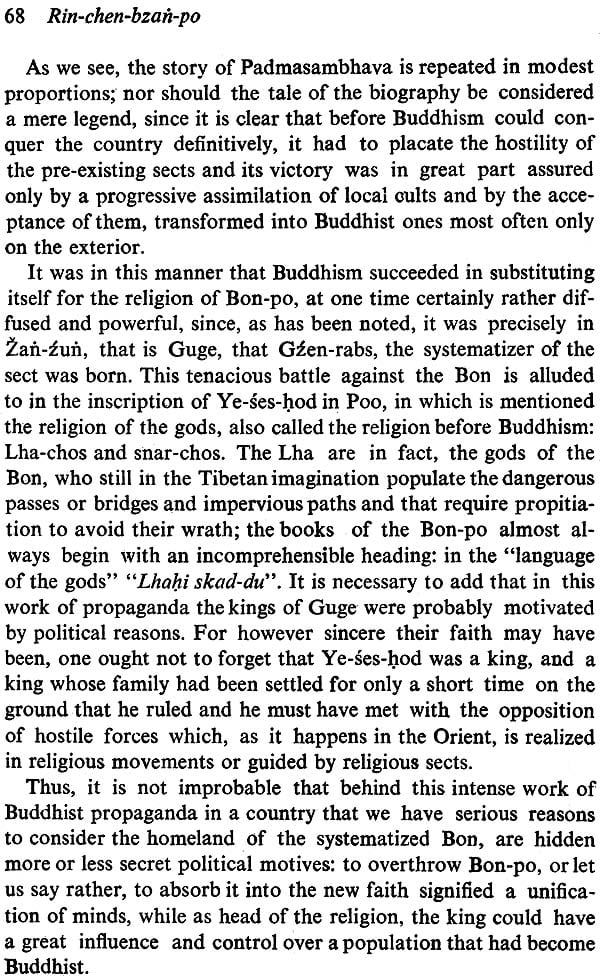 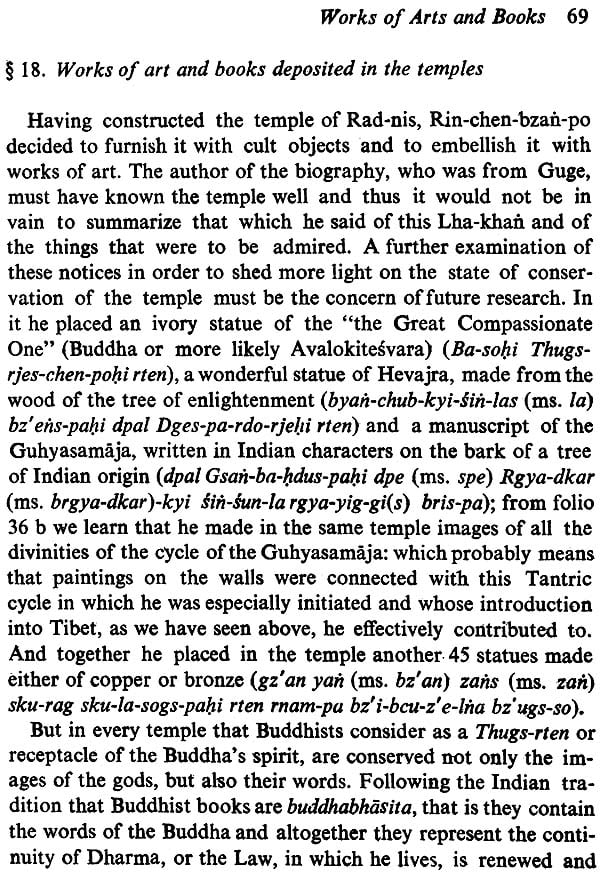 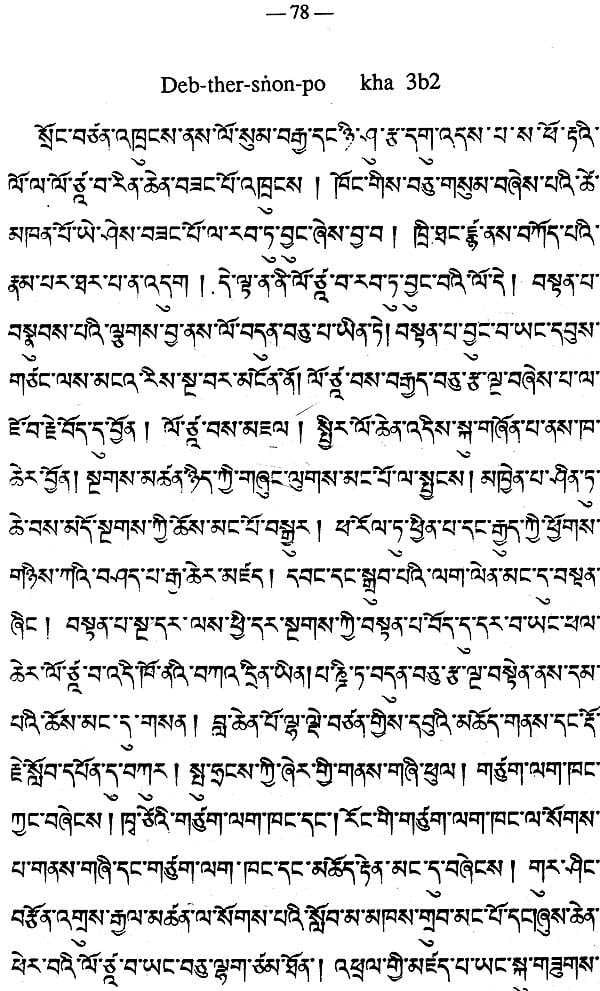 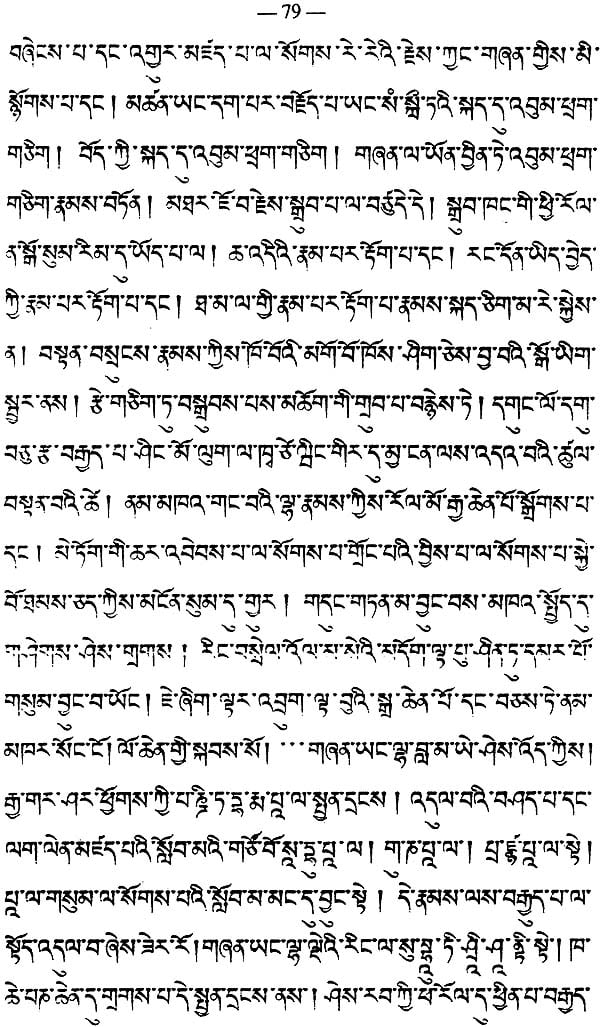 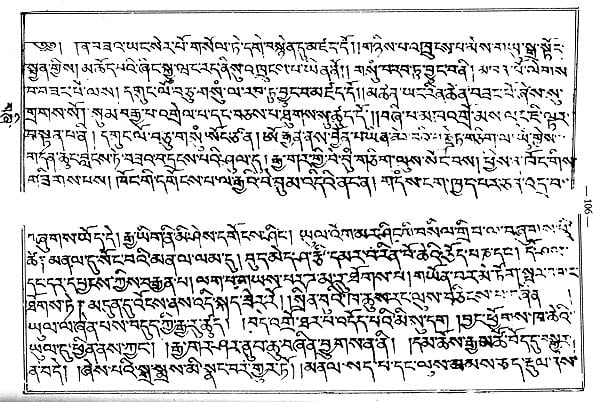 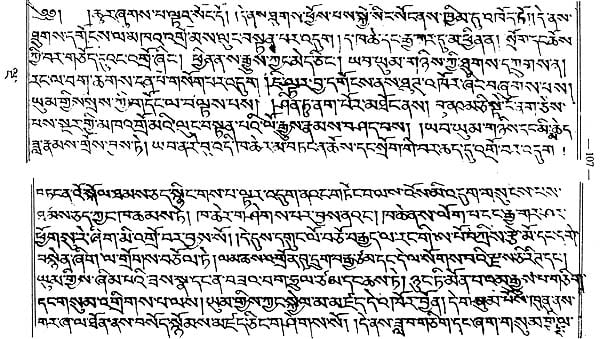 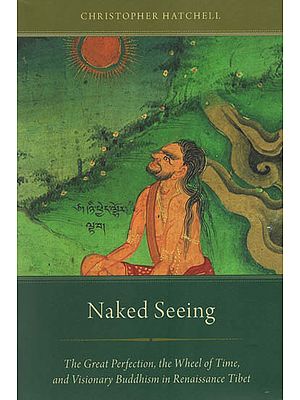 Naked Seeing (The Great Perfection, The Wheel of Time, and Visionary Buddhism in Renaissance Tibet)
By Chrishtopher Hatchell
$60
FREE Delivery 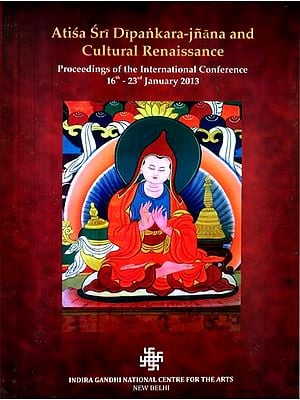 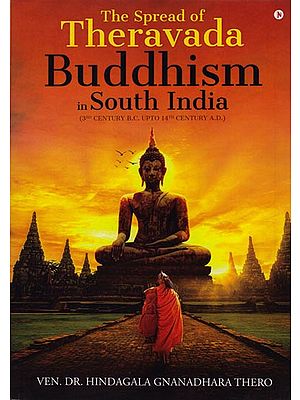 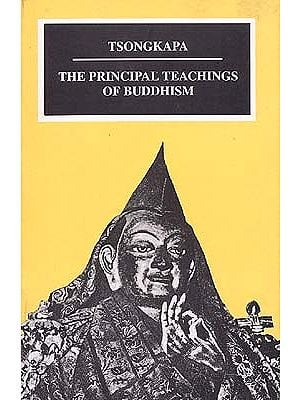