Edited with introduction and translation in English by Radhagovinda Basak.

The highly important work was published by the Asiatic Society in 1971. This collection of Seven hundred verses written in Maharastrain Prakrit gives us a glimpse of rural society and life in very ancient times. Professor Radhagovinda Basak was an eminent scholar. He was the first among the Sanskrit Prakrit scholars to translate the seven hundred verses into highly readable English. The reprint of this work would surely be deemed useful by scholars of ancient Indian history. Sanskrit and Maharastrian Prakrit. This reprint would be an achievement of the publication section of the Asiatic Society.

The unique anthological treatise which goes by the name of Hala’s Sattasai (Saptasati) composed in Maharastri Prakrit has- up to now passed through several editions—the German edition of Weber (1870, 1881 and 1889), Pandit Kedarnath and Vasudev’s Bombay edition (1911), Pandit Mathura-nath Sastri’s edition (1933), a Bengali edition (1956) by the present editor, and lastly another Bengali edition (1970) containing a metrical translation in Bengali by my old student Professor Parbati Charan Bhattacharyya, M.A. So far as I know, the Prakrit gathas of the Saptasati in their entirety have never yet been translated into English by any scholar. A few years ago when I was more active in my literary work I translated all the seven centuries of verses into English. The then General Secretary of the Asiatic Society, my esteemed friend Dr. S. K. Mitra, M.A., B.L., D.Phil., F.A.S. requested me to make over the manuscript of my English translation of the Gathas which he got passed by the Executive bodies of the Society for its publication by the Society in a separate English edition. I am very grateful to the Society for readily accepting my work to add to the Society’s own publications.

In my English Introduction I have made an attempt to give a brief idea of the rural life of the Indian people, specially of the middle Deccan and parts of Western India, so far as is revealed in the gathas. I need not make a mention here of the extensive illustrations drawn from this Prakrit treatise by Indian rhetoricians in their discussion on dvani or vyary and (suggestiveness).

I express here by heartiest gratitude to my young disciple, Dr. Naresh Chandra Jana, M.A., D. Phil., Professor of Bengali in a Government sponsored college at Behala, Calcutta, for his kindly preparing on my behalf the two Appendices, (i) the alphabetically arranged list of the verses with some words in the beginning and (ii) the list of the names of the Prakrit poets who compos-ed the individual verses, so far as they could be collected. _I cannot here omit to acknowledge the strenuous work of reading the proofs in their second and third stages, which my very able and dear student, Dr. Sibendra Nath Ghoshal, M.A., D.Phil., Calcutta University Lecturer in Prakrits in the Post;-Graduate classes, undertook, I must say, out of com-passion towards me at this my 87th year.

I have an apology to make to scholars by stating that in printing the Sanskrit Transliteration of the original Prakrit gathas I have not obeyed the rules of Sanskrit euphonic combinations and put each inflected word separately with the sole purpose of showing the full Sanskrit equivalents of the corresponding Prakrit forms. I have used hyphen marks in editing the Sanskrit and the Prakrit compounds to show clearly their component parts. I am deeply indebted to Dr. S.K. Mitra, Dr. B.N. Mukherjee, Dr. K.K. Das Gupta Sri Dipak Sen, Sri Biram Mukherjea and also other officers of the publication department of the Asiatic Society to gem my book through the press and publish the same.

Lastly I should record here my thankfulness to the authorities and workers of the Sree Saraswaty press Ltd. Calcutta for the nice execution of the printing of the book.

The name of the compiler of` this anthology is Hala, the Kavi—vatsala (literally ‘affectionate towards the poets’).The writer on poetics, Dandin, has named Kosa-grantha as being one variety of poetical writings in Sanskrit and the much later writer on poetics, Visvanatha, has given the following definition of a kasa work:"

Kosah Sloka Samuhas-tu syad anyony anapeksakah i.e. technically speaking, a Kosa is a collection of verses which are independent of` each other. All the seven centuries of gathas in this treatise form, as it were, a Kavya in which the sentiment (ram) of love is most prominent. Although no verse is closely connected in form or matter to any other, yet the verses can possibly be arranged into groups or sections according to particular topics. What is generally defined as an arya metre in Sanskrit is called a gatha in Prakrit. A Prakrit gatha gives its own definition thus:

That is called a gaha or gatha which contains twelve matras in the first foot, eighteen in the second, again twelve in the third and fifteen decorating it in the fourth.

There is a distinct difference between the Prakrit language used in the ancient Nanaghat and the Nasik cave inscriptions and also those in some other parts of old Maharastra country and the Prakrit used in Hala’s Saptasati. The reason for this difference of` language in contemporary documents may be attributed to the fact that the inscriptions were meant to be understood easily by the people in general and the gatha verses were composed in the Maharastri Prakrit sanctioned by grammar and its rules. 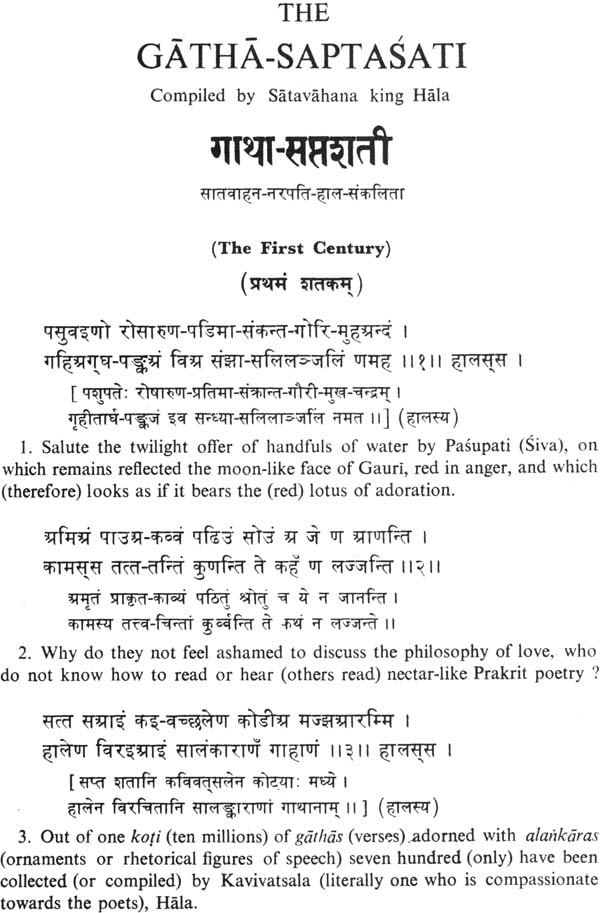 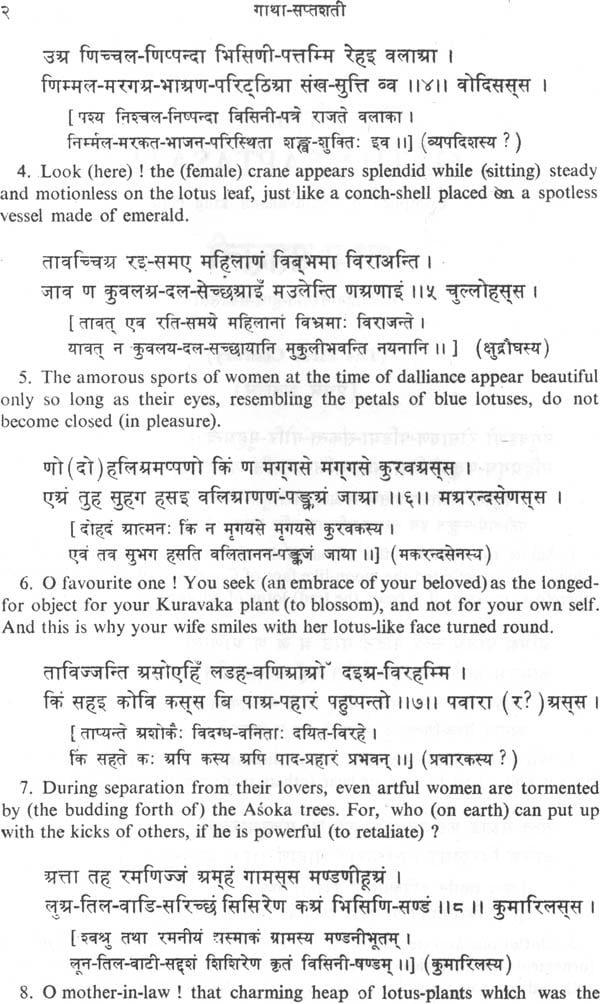 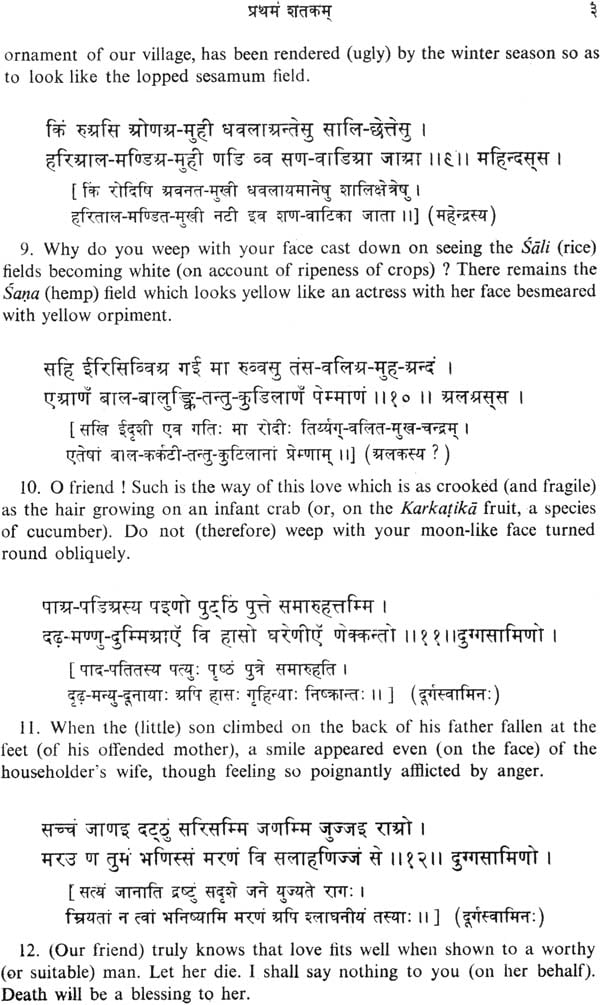 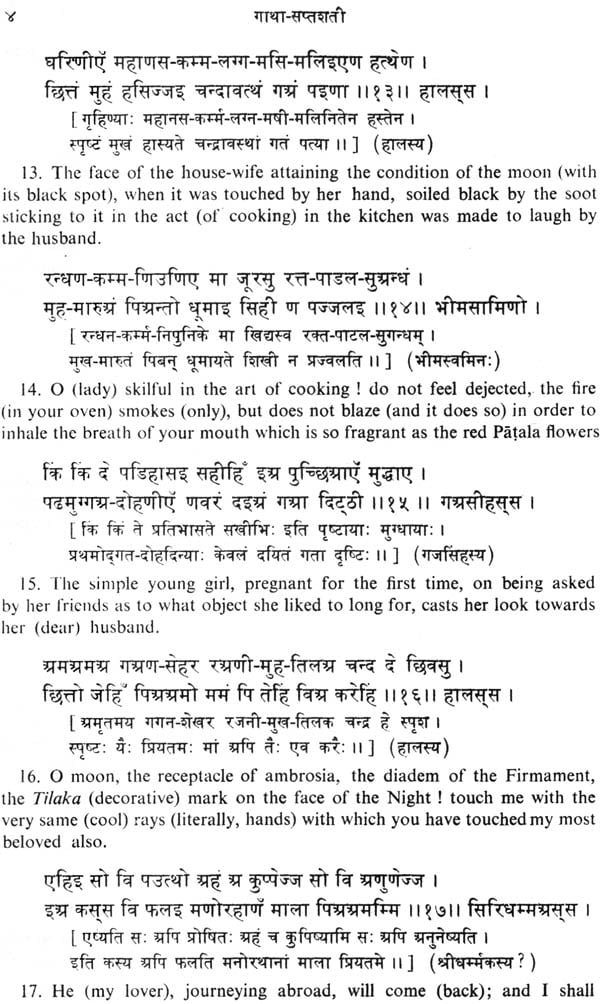 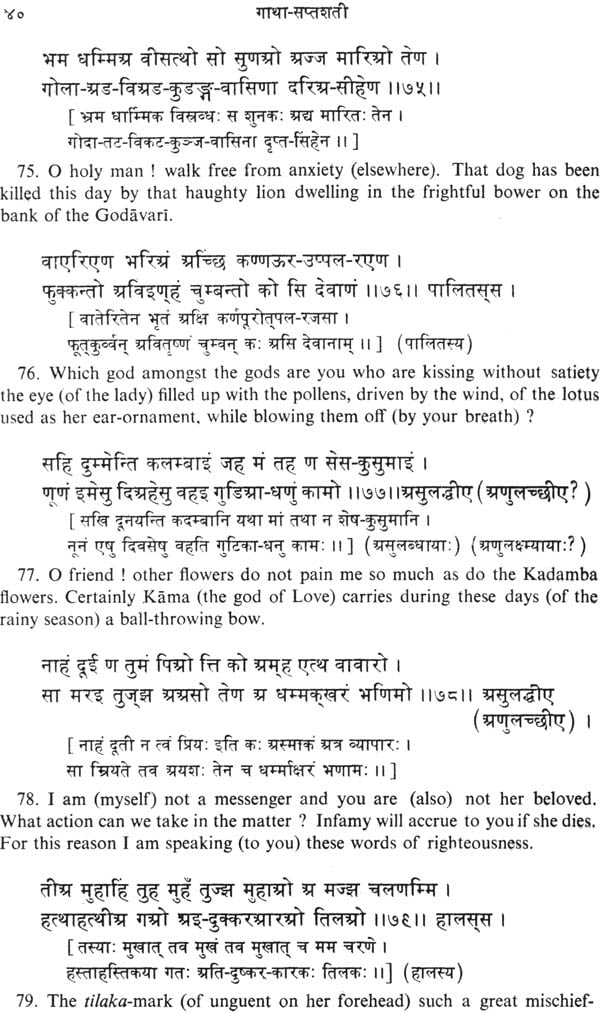 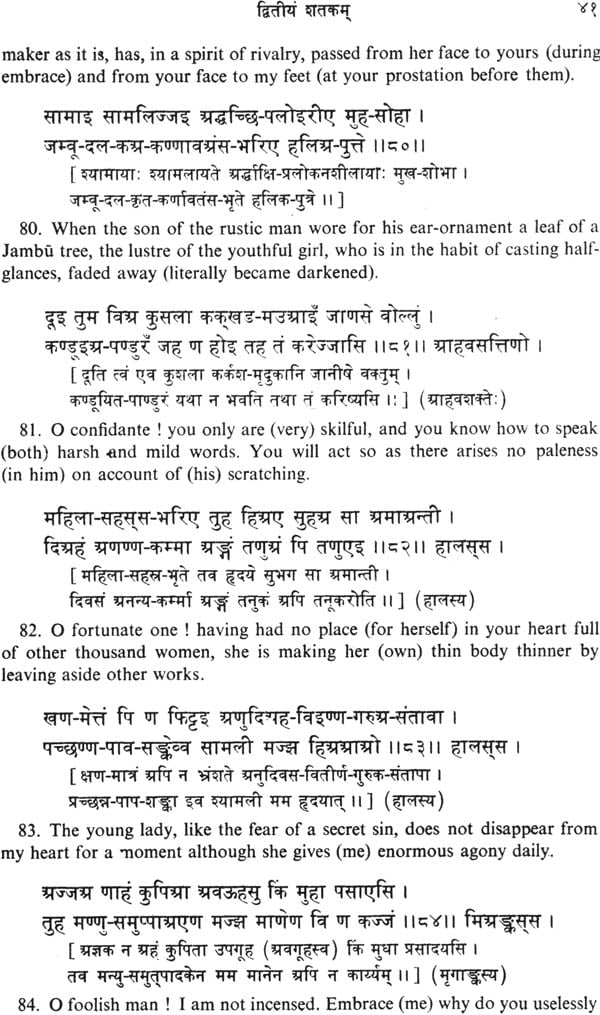 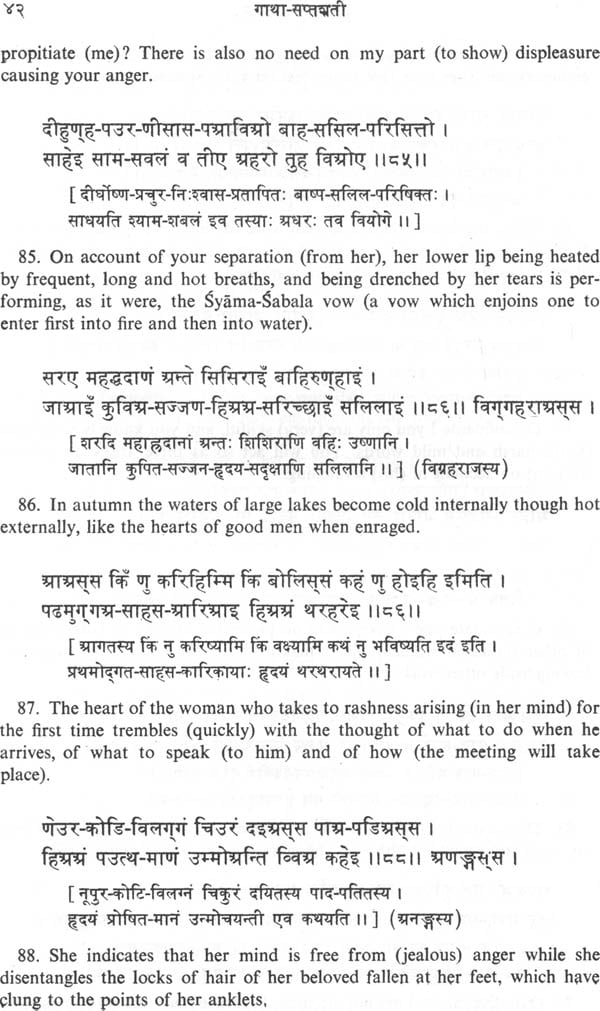 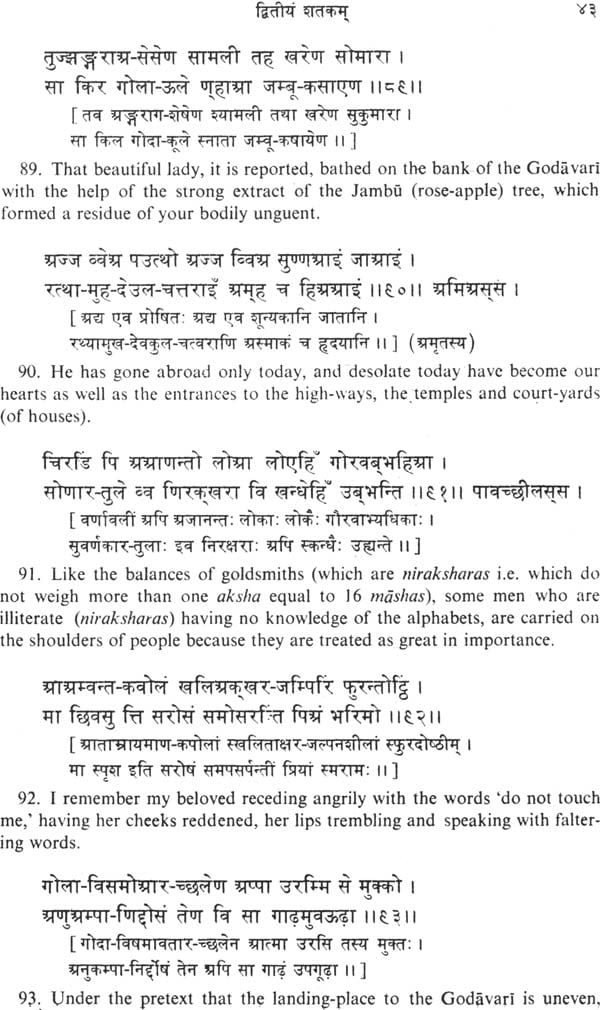 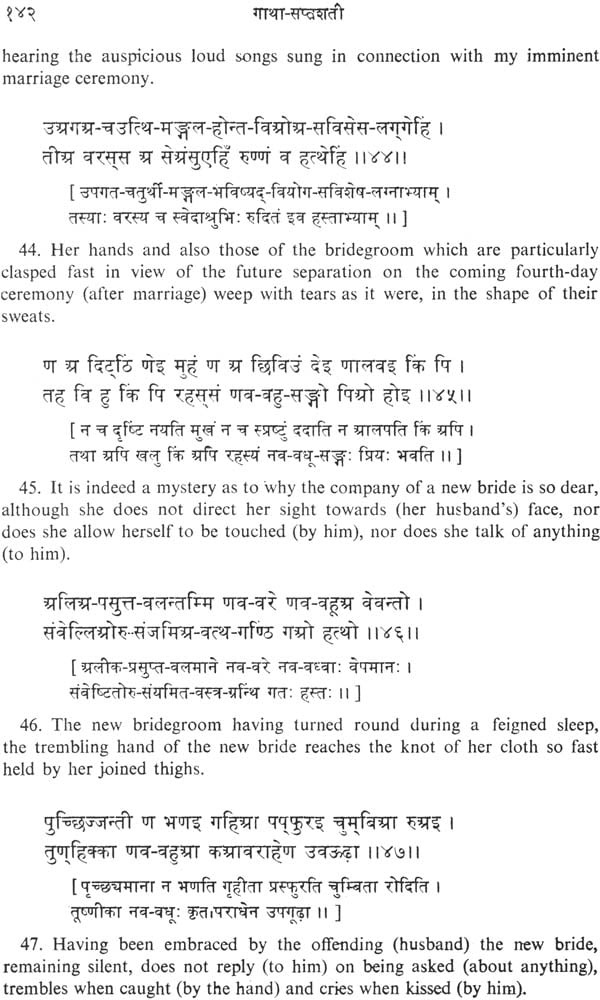 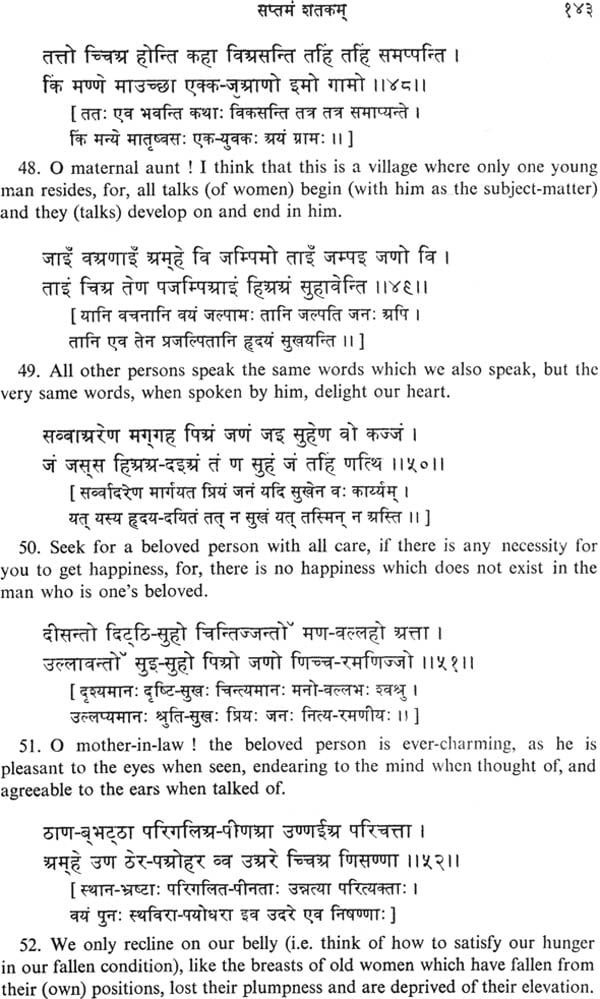 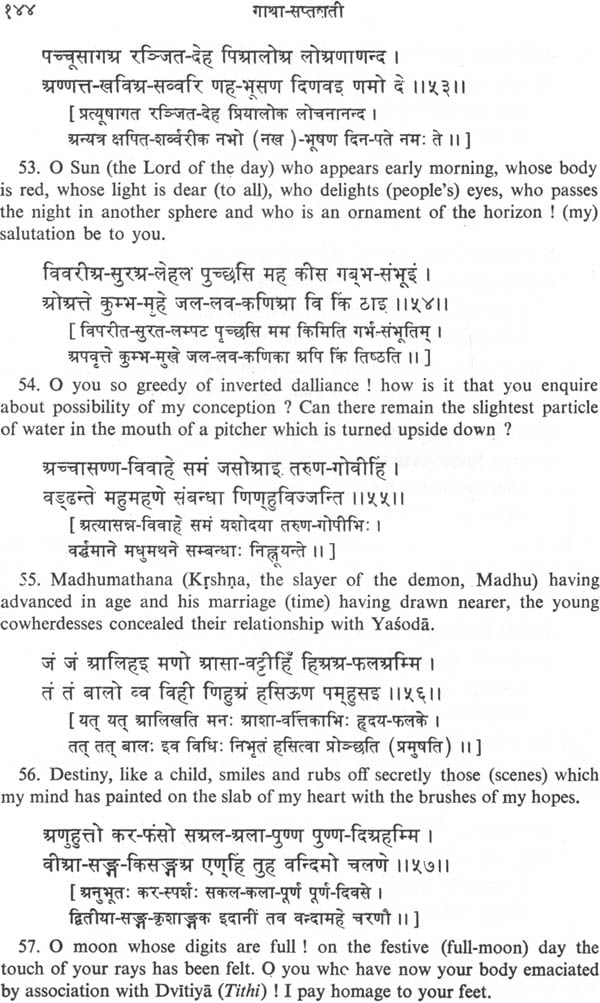 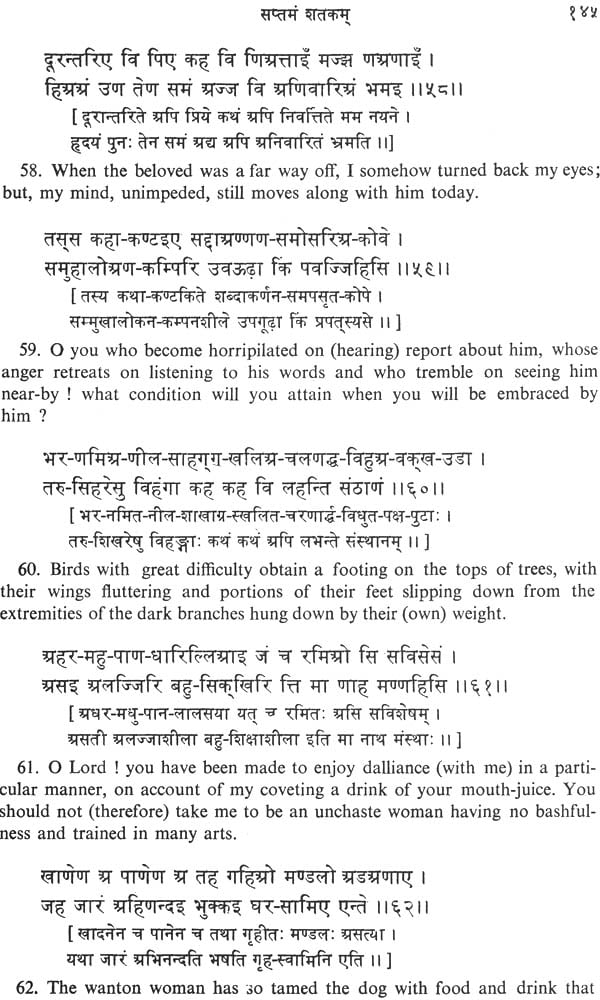