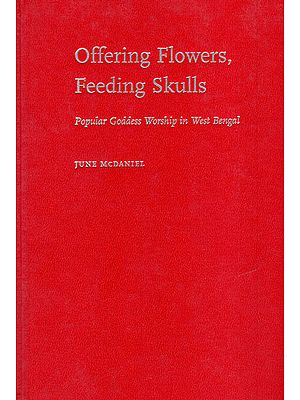 In the spring of 1998, India detonated five underground bombs at Pokhran, in northwestern India. Some Indian newspapers declared Pokhran to be a shakti pitha, a place sacred to the goddess Shakti. Western observers wondered whether this was some sort of religious justification for India's nuclear testing.

The term shakti has a variety of meanings in India. According to the Samsad Bengali-English Dictionary, it means power, strength, might, force, capability, energy, and potency (and it was a name for an ancient missile). Shakti also means the female principle taking part in creation, or the female deity.'

The goddess Shakti is the essence of divine power, whose presence is believed to be manifest in certain places on earth. As the story goes, when the goddess in her incarnation as Sati committed suicide (due to her father's insults to her husband, Shiva), Shiva was maddened with grief and danced with her body in his arms. The gods wished to stop his mad and destructive dance, so they chopped her body into pieces. These pieces fell in different places in India, and each place became sanctified ground. These are the shakti pithas or sati pithas, and today these places are recognized as shrines, which are visited by religious pilgrims. The goddess is believed to reveal her power of creation and destruction in such places-and what place could reveal power more clearly than a place where nuclear weapons have been detonated?

India is an important area of study for goddess worship. Whereas many feminist theologians and mythologists struggle to reconstruct ancient goddess traditions from the artifacts found in such ancient cultures as Celtic Ireland and Periclean Greece, India has been worshiping goddesses continuously for thousands of years, and continues to do so today. If we accept the thousands of stone statues of women found at such ancient Indus Valley sites as Harappa, Mohenjo-Daro, and Lothal (these centers are usually dated from 0500 BCE to 1500 BCE) as goddess statues, as do many scholars, then goddess worship has been going on in India for at least four thousand years.

Geographically, Shaktism or goddess worship in India has primarily been of two types-the south Indian worship of the goddess Shri or Lakshmi and the worship of the goddess Kali. These types have different values and rituals and emphasize different goddesses (or different forms of the same goddess, depending on the theology). The first type, located primarily in southern India, sees the goddess as the embodiment of good fortune, fertility, and wealth, and it respects the brahmanical tradition (the orthodox Hindu tradition, which emphasizes caste and purity). It tends to follow the classical or shastriya approach, with knowledge of and respect for scriptures. Shri is a goddess of blessing and auspiciousness.

The second type is found mostly in northern and eastern India, especially in West Bengal, Assam, Bihar, and Orissa. The focus of this Kali lineage is upon the goddess as the source of wisdom and liberation. It has a complex relationship with the brahmanical tradition, which many of its practitioners understand to be overly conservative; brahmanical tradition rejects, they say, the experiential aspects of religion in favor of scholarship and social status. Practitioners whom I have interviewed often claimed to be nonscriptural or ashastriya, finding books to be only a beginning of deeper knowledge of the divine. Kali, Tara, and sometimes Durga are the main forms of the goddess in this tradition, and there are ten different forms of Kali that are worshiped (the ten Mahavidyas or great wisdom figures). There is also worship of both local and pan-Indian goddesses, who are described in stories written in Bengali and in Sanskrit sacred texts. All of them may be understood as aspects of Shakti, the feminine power of creation and transformation.

There are many origin stories of the goddesses. According to the Vayu Purana, a medieval Hindu text, the god Shiva was of twofold nature (male and female). Shakti or his female nature also had two aspects: one half was sita or black, and the other half was asita or white. The black or fierce nature included such goddesses as Kali, Durga, Chandi, Chamunda, Bhadrakali, and Bhairavi, whereas the white or peaceful nature included Uma, Gauri, Parvati, Mahesh-vari, Lalita, and Annapurna. The fierce forms became important as part of the Kali tradition, and the Devi in fierce form is seen in such medieval texts as the Markandeya, Skanda, Devi, Gauda, and Shiva puranas, as well as such tantric encyclopedias as the Tantrasara. The worship of Durga in her fierce form of Mahishamardini (the conqueror of the buffalo demon) was also widespread. 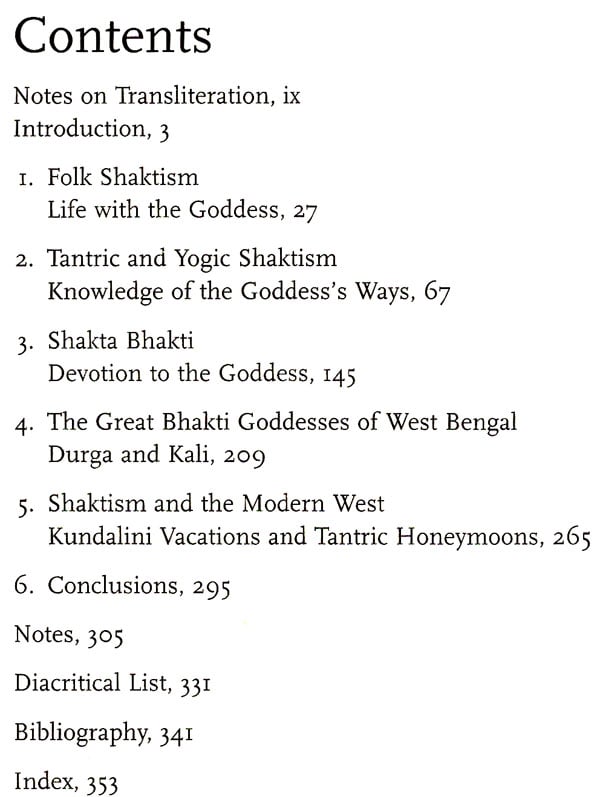 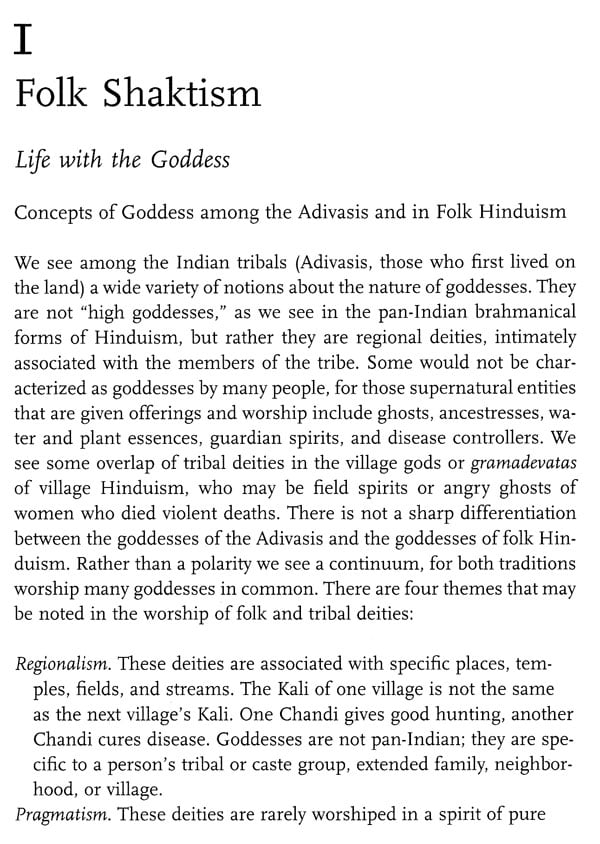 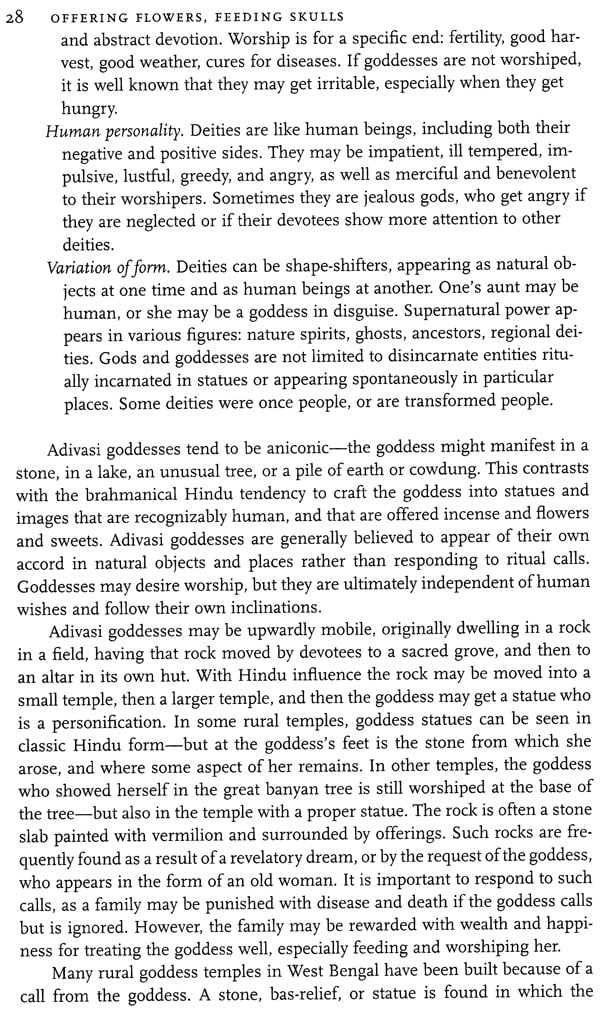 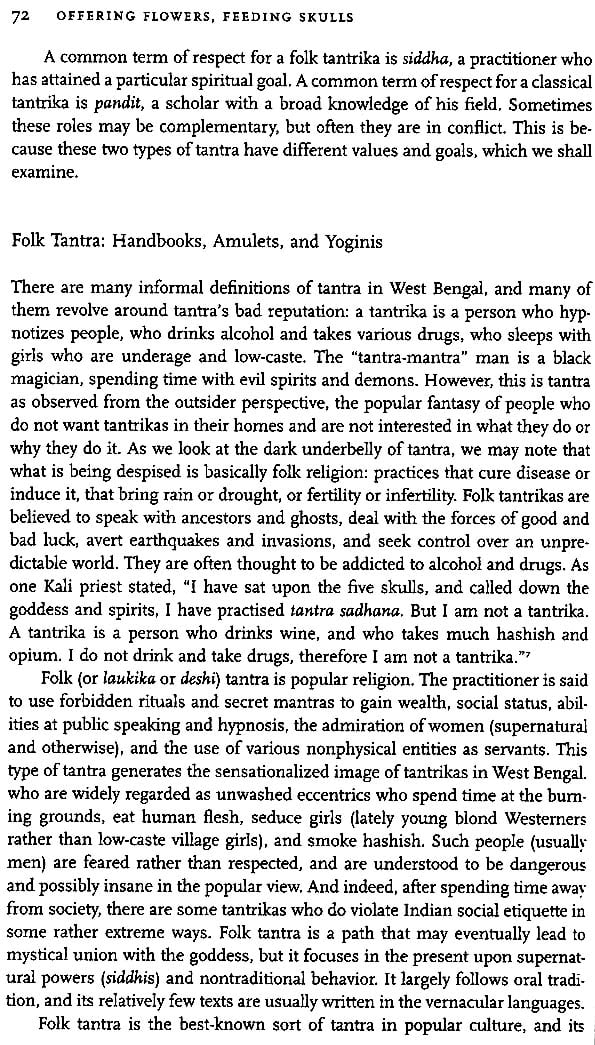 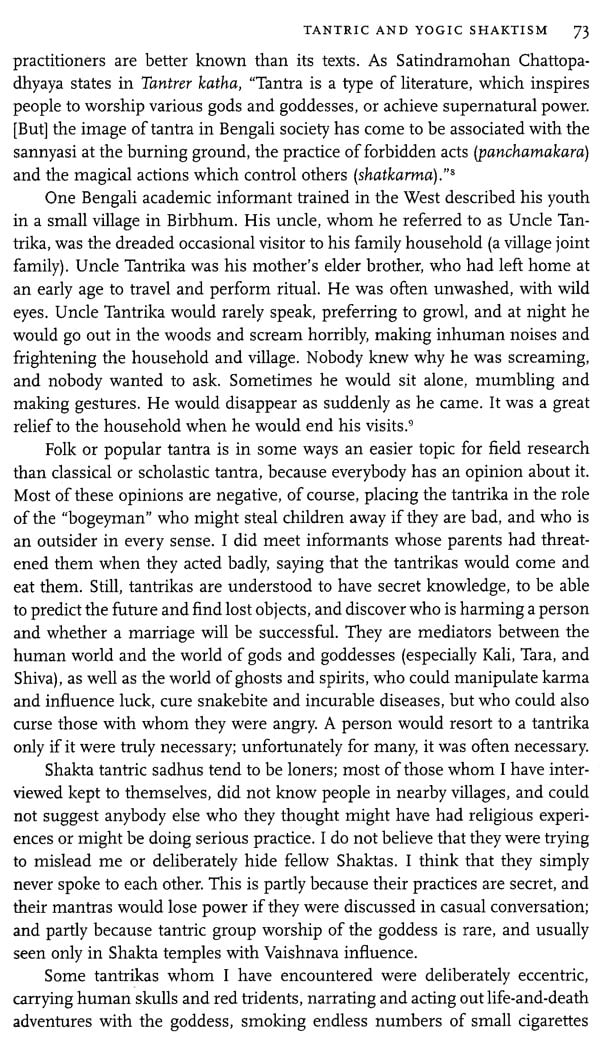 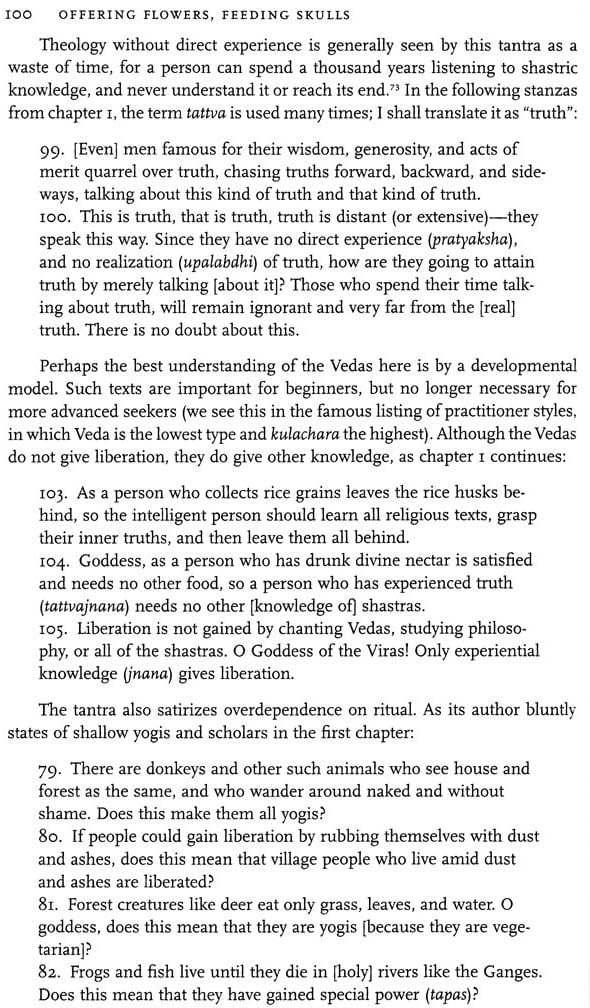 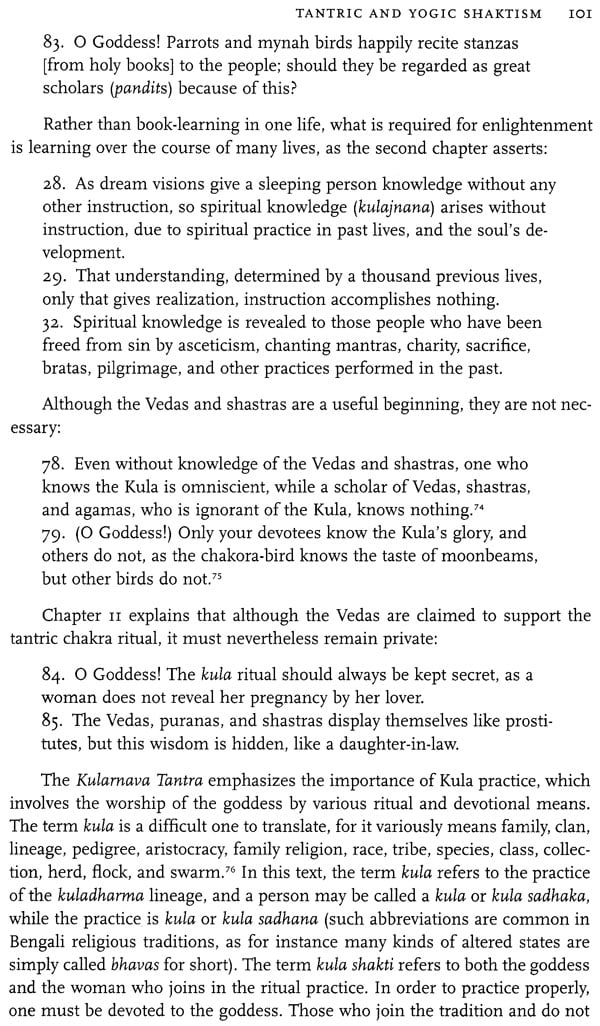 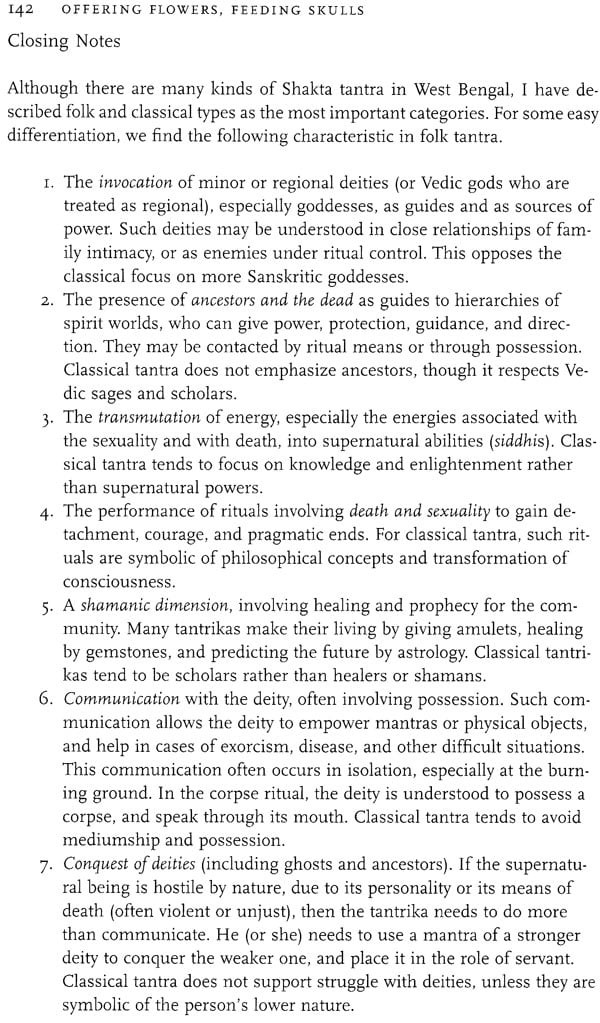 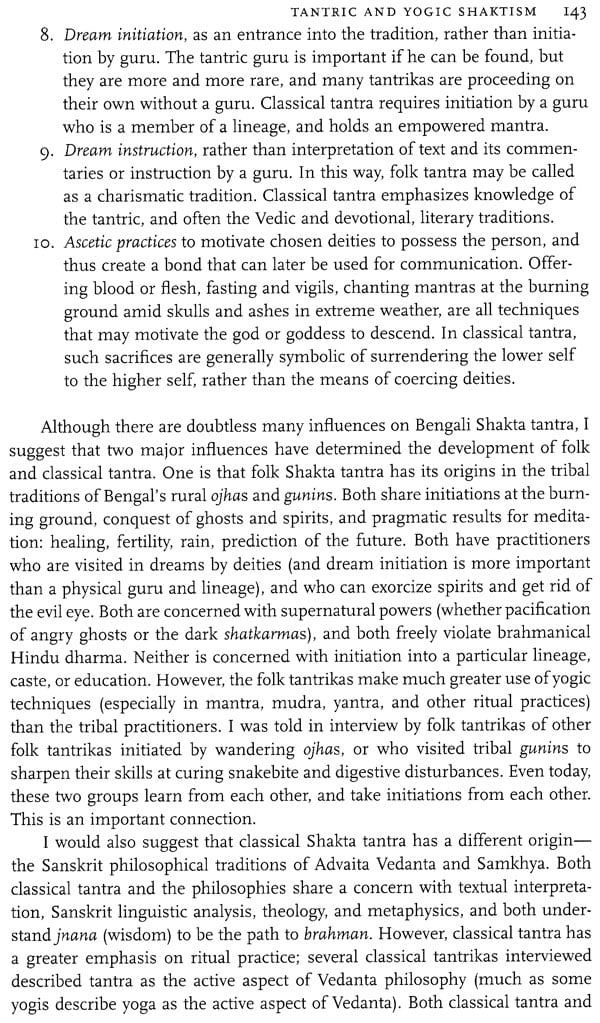 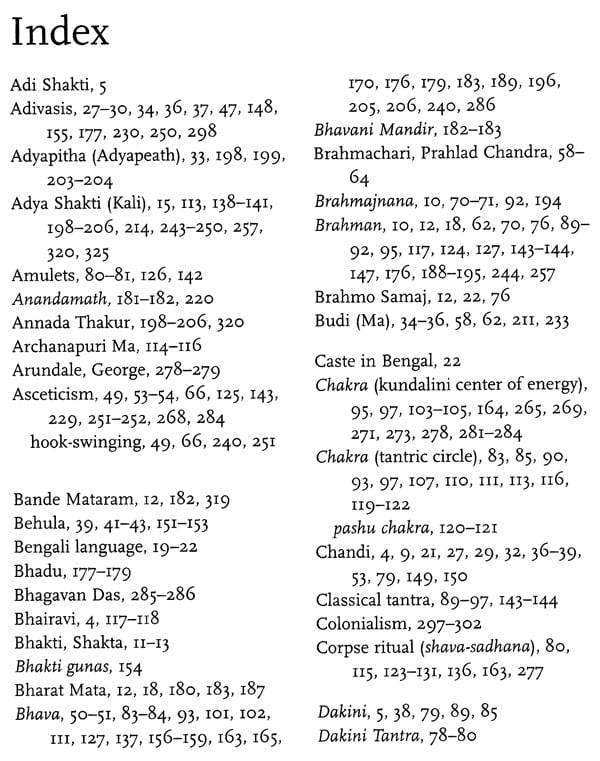 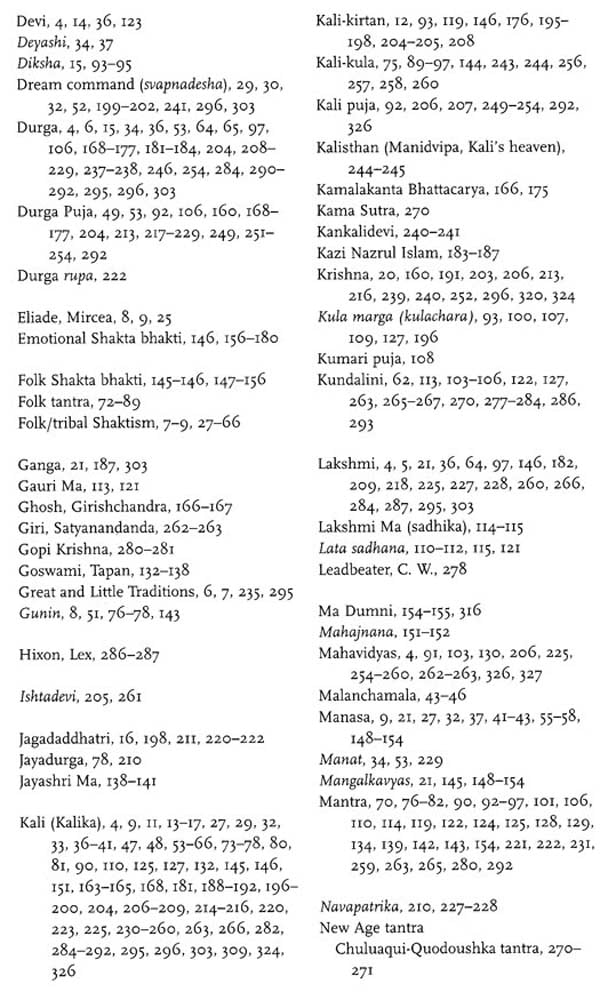