Pali, in addition to its importance as a Middle Indic language, is the classical language of Theravada Buddhist texts and it is thus the Buddhist canonical language of such Theravada countries as Thailand, Cambodia, Sri Lanka and Burma. As a gateway to that important body of textual material it is of special importance to the student or scholar of Buddhism as well as being of great interest from the literary-cultural as well as the linguistic and historical points of view.

The book is intended to serve as an introduction to the reading of Pali texts. For that purpose, it uses authentic readings especially compiled for the purpose drawn largely from Theravada canonical works, both prose and poetry. The readings are in Roman script, and carefully graded for difficulty, but they have also been selected so that each of them is a meaningful and complete reading in itself, so as to introduce some basic concepts and ways of thought of Theravada Buddhism. This book thus offers an opportunity to become acquainted with the ways in which the teachings of the Buddha are embodied in the language; a sense that is impossible to determine from English translations. The book contains 12 lessons. Each of them has three parts: (1) a set of basic readings and an accompanying glossary, (2) grammatical notes on the forms in the lesson, and (3) a set of further readings with its own glossary. The further readings introduce no new grammatical points, but reinforce ones already presented and give further practice in them. The work concludes, fittingly, with the Buddha's first sermon, The Dhammacakkapavattana Sutta. A cumulative glossary and index to the grammar is also provided.

The text has been used successfully in its preliminary form at several universities, but it may also be used for self-study.

This book had its beginnings in a set of graded readings and grammatical notes that the authors began to assemble and discuss a number of years ago, when we found that there was a lack of introductory material for Pali that emphasized reading and a direct approach to texts that could be read by beginning students and at the same time conveyed some of the fundamental Buddhist ideas and concepts that were embodied in the Pali tradition. Professor Karunatillake played the primary role in the original selection, which thus had a Sri Lankan Buddhist perspective. At the same time, we believed that a text of this nature should be graded in terms of grammar and as far as possible, vocabulary, since we were aiming at a beginning student, and did not want to presume any prior knowledge, as of Sanskrit. Thus we resolved throughout to treat Pali as a language in its own right. In short, we attempted to apply the same approach that we and others had used in texts for modem spoken and written languages. Along the way to the present work, there were numerous replacements, additions, and re- orderings, along with many valuable and pleasant hours of analysis and discussion of both grammar and content. These lessons have also been used in successive forms in our Pali classes, and the progress and the reactions of the students have been encouraging indeed. We hope that the original perspective and intent has been retained.

Too many colleagues and students have contributed comments and encouragement for us to name them, but we would particularly like to single out a few. Successive generations of students have pointed out misprints and missing items, along with unclarities or difficulties that they encountered. In particular, Kim Atkins not only fulfilled those functions, but typed a great deal of the text in an earlier form. Richard Carlson and Tamara Hudec were particularly active in the editing function as they learned. Ratna Wijetunga and L. Sumangala contributed suggestions, and colleagues and friends, such as John Ross Carter, Charles Hallisey, and John Paolillo encouraged us to bring this material to final form. Charles Hallisey also made a special contribution, by using this text in his classes at Harvard and making numerous suggestions that have found their way into this version. We also thank Professor Lakshmi Narayan Tiwari for his valuable suggestions, and Mr N.P. Jain of Motilal Banarsidass for his help in bringing this work to publication at last.

We will be happy for comments and suggestions, and hope that others will find these materials useful as we have. If it offers, even in a small way, entry for more students, whether in formal classes or not. into the language and thought of Pali Buddhist texts, we will feel more than amply rewarded for what efforts we have put into the task.

WHAT IS IN THIS INTRODUCTION: This introduction 'is in four parts: The first describes the principles on which this text is organized, and suggests how it is intended to be most efficiently used. Students, especially those proceeding on their own outside of a regular class, are thus strongly urged to read that section before beginning their study. The second part deals with the alphabet and alphabetical order, with some information on the pronunciation (phonological system)system of Pali. Interested students may investigate the latter, but all should at least become acquainted with the order of the alphabet in order to use the glossaries in this text. The third part gives some general background to Pali language and literature, particularly those works on which we have drawn for our readings. Lastly, there is a brief list of basic sources that the student might find useful in studying Pali, and continuing past this text.

Cumulative glossaries, and indices of grammatical forms and topics will be found at the end of the volume.

PART I: THIS TEXT AND HOW TO USE IT

The readings and grammatical notes included in this text are intended to serve as a primer to introduce Students to the reading of authentic Buddhist texts in Pali (sometimes written as Pali and in English usage commonly written simply as Pali). The emphasis throughout is thus on acquiring the ability to read, and the texts have all been selected and ordered with that goal in mind. At the same time, however, we have operated under the principle that such reading should not be a mere exercise, but should have significant and interesting content. We have thus made every attempt to make every reading, even if a selection from a larger text, self-contained and meaningful and in some sense complete in content. We have also assumed no knowledge of Sanskrit or any other Indo-Aryan language, but have approached Pali as a language in its own right. We have also assumed a wide range of learners, ranging from the interested student of Buddhism who may be approaching the texts on his/her own, through college freshmen and graduate students. In the classes in which the successive versions of this text have been used, we have found that it can indeed be used successively by such a range of learners. We have thus attempted throughout to make the grammatical explanations as clear and non-technical as possible, though obviously a student with some general grammatical knowledge, and especially one who has had exposure to some other language 'with case and verb agreement may find them, and probably the readings, easier at first.

For this book to be used effectively, however, the following points about its organization and the selection of texts should be kept in mind.

I. Each lesson has three parts: (I) a set of basic readings and an accompanying glossary, (2) grammatical notes on the forms in the lesson, and (3) a set of further readings with its own glossary. The further readings introduce no new grammatical points, but reinforce those already presented. Thus the student should work out the basic readings carefully, consulting the vocabulary and the grammar. After that he or she will have the equipment to read the further readings for necessary practice and reinforcement, usually needing only to consult the glossary for them.

2. The readings have been carefully graded, particularly for grammatical features, and the vocabulary is cumulative. Thus they should be used in the order given. Sometimes, particularly in the earlier lessons, it was impossible to avoid including some forms that we introduce later, given our principle of using only authentic texts. At the same time, we did not want to overload the earlier lessons, when everything is new, with most of the grammar. Thus when a form that is described in a later lesson occurs in an earlier one, we have simply glossed the earlier occurrence as a unit, without an explanation, saving that for later.

3. The student will note that many of the readings, particularly in earlier lessons, contain passages that are repeated with only a few changes in vocabulary in each repetition. This was in fact one element in their selection. With such readings, once the student has worked out the first part, the rest can be read by looking up only a restricted number of new items. Thus reading them need not be simply laborious exercises in decoding and looking up words, but they may be read as text, with minimal lookup. At the same time, grammatical and rhetorical patterns will be reinforced, and will be more easily dealt with when encountered later. Thus these repetitions should not be skipped. On the contrary, they can be enjoyable in that they allow the student to approach the text for content, and what is more, they do represent one rhetorical device commonly found in Palli texts.

We may now mention one or two things that we have not taken as goals for this text.

This book' is intended as an introduction to reading Pali, not as an independent scholarly contribution to the linguistic or literary study of the language. Thus our grammar sections are intended as aids to the learner, and we have not attempted to cover in them all of the variants that one might encounter in reading further in texts. However, the student should, after completing the readings here, and acquainting himself or herself with the basic vocabulary and grammatical patterns, have sufficient background to make use of other reference sources, such as those listed at the end of this introduction, to deal with the new forms met with in future reading.

Similarly, a word needs to be said concerning our treatment of vocabulary. One cannot read Pali Buddhist texts without encountering a number of technical terms, such as dhamma, khanda, kamma etc.etc. which have not only specialized, but manifold meanings within Buddhist thought. These have served as the basis for extensive commentary, elucidation and disputation within both the Pali and the western scholarly traditions, and many of them have been the subject of more than one book-length treatment. While we are fully aware of the importance of such work, and the indispensability of a dear understanding of such terms if one is to attain a really adequate understanding of the texts, we have not attempted to make any original contributions in that direction. Thus we have glossed forms in relation to their senses in specific texts in which they appear here. The student with an interest in the range of meanings of such terms, and their precise technical sense, is encouraged to consult the many scholarly sources on Buddhist concepts and philosophy. Nevertheless, the meanings of these technical terms are best learned when encountered in a range of actual contexts, and it is our hope that the readings here will enable the student to make a start toward that end. 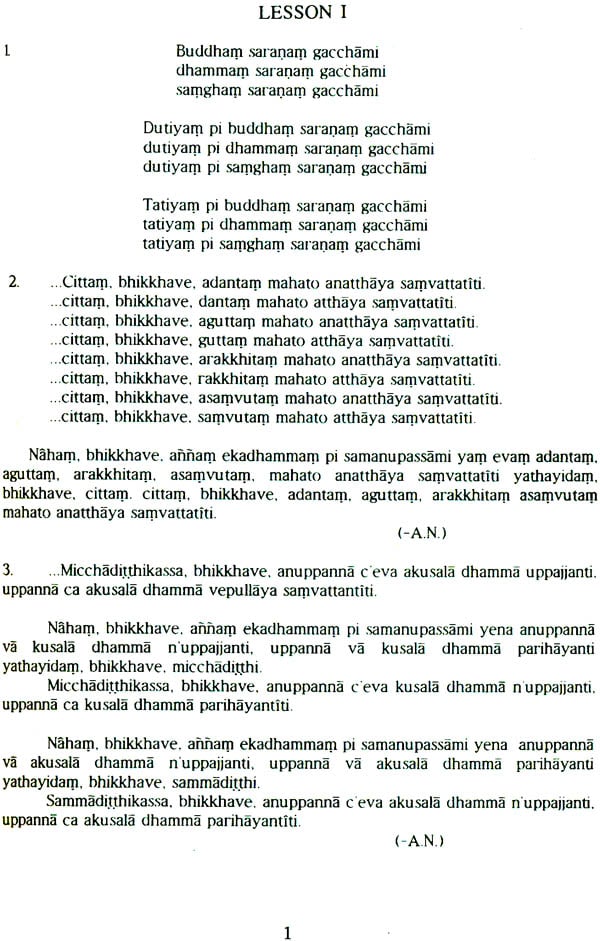 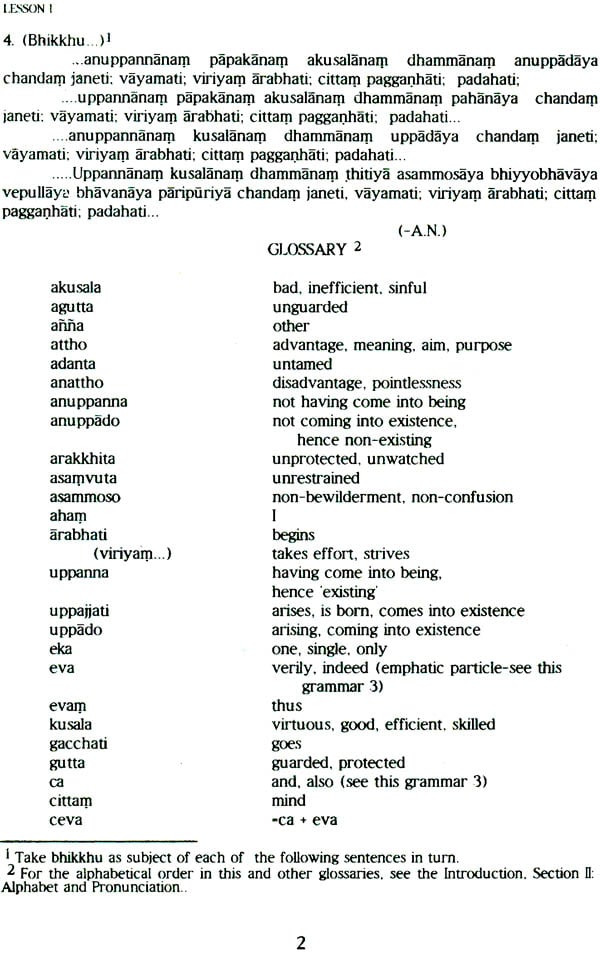 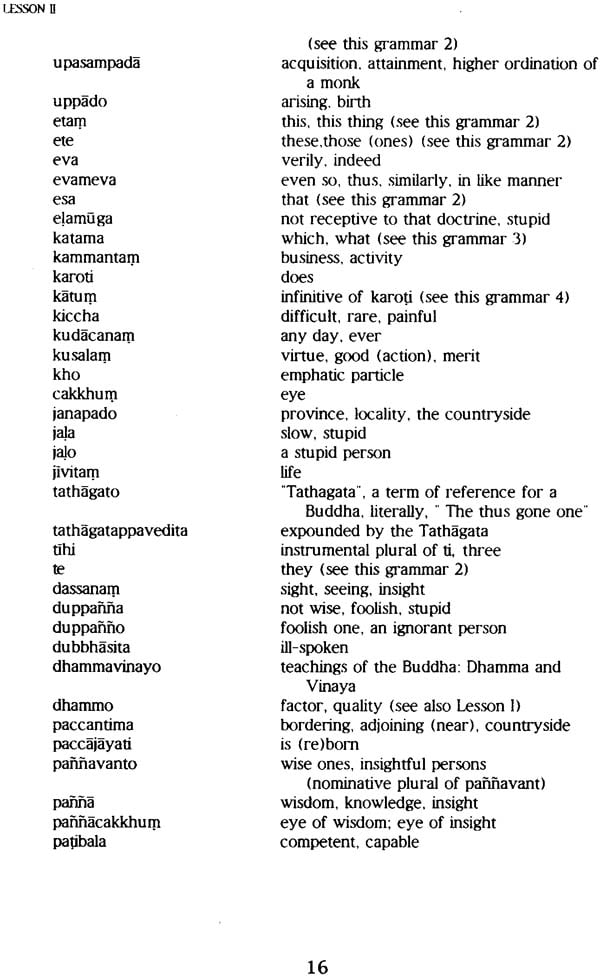 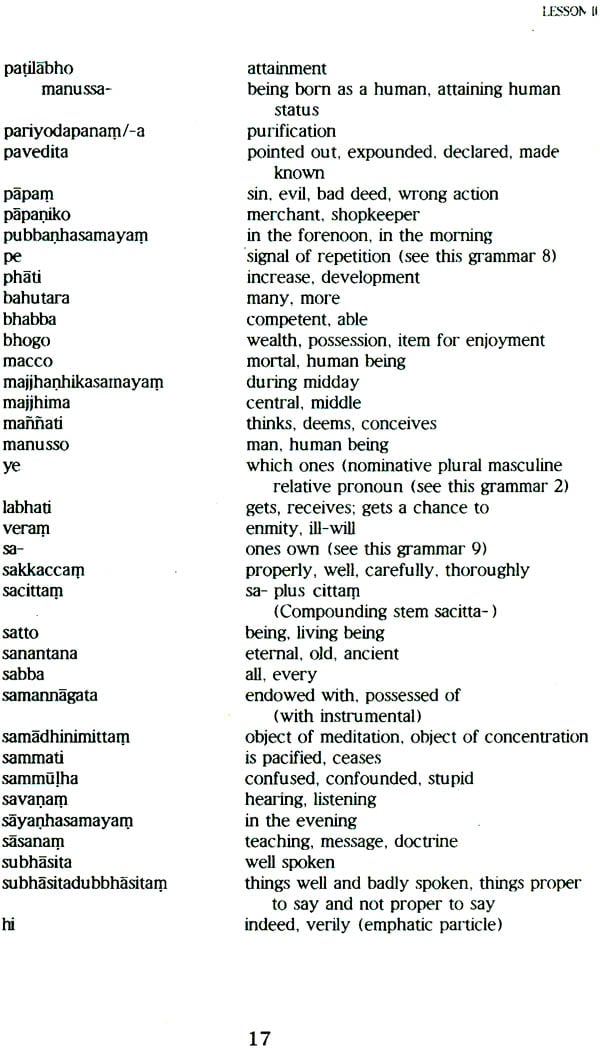 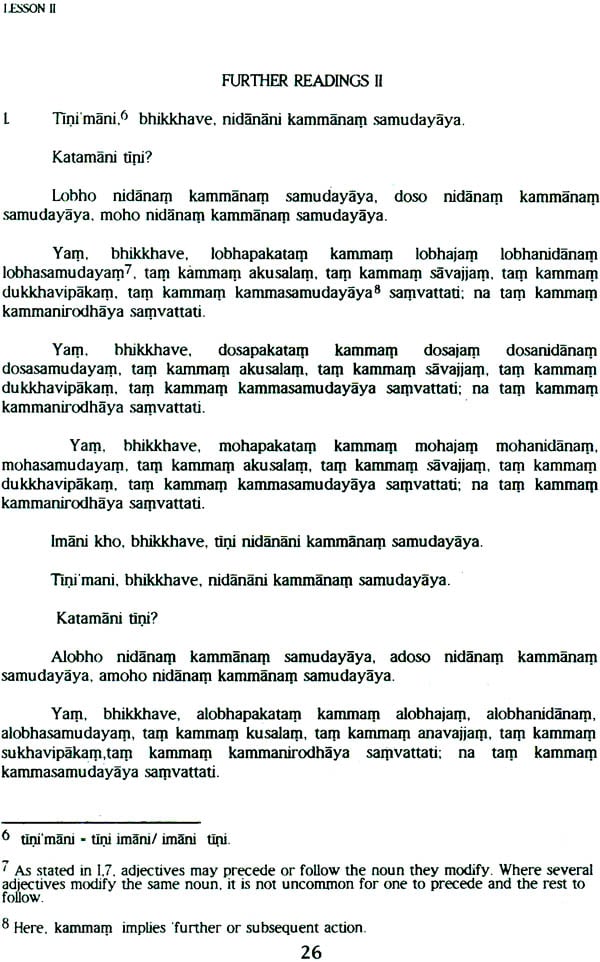 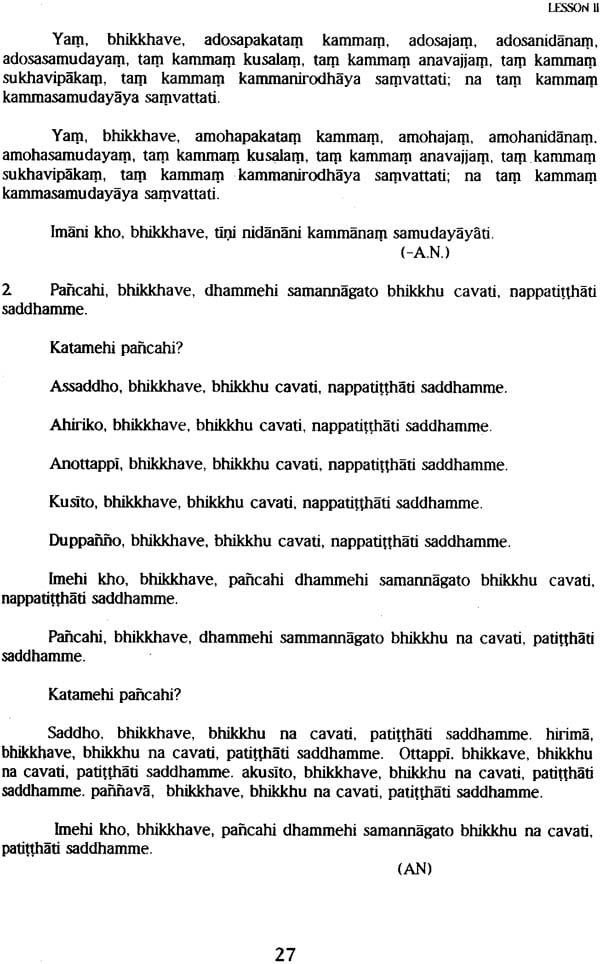 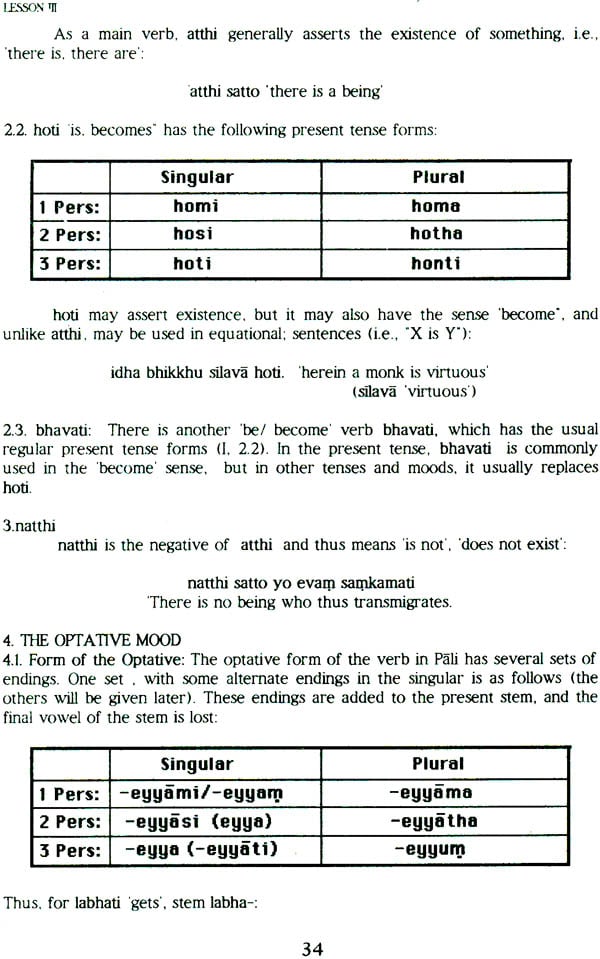 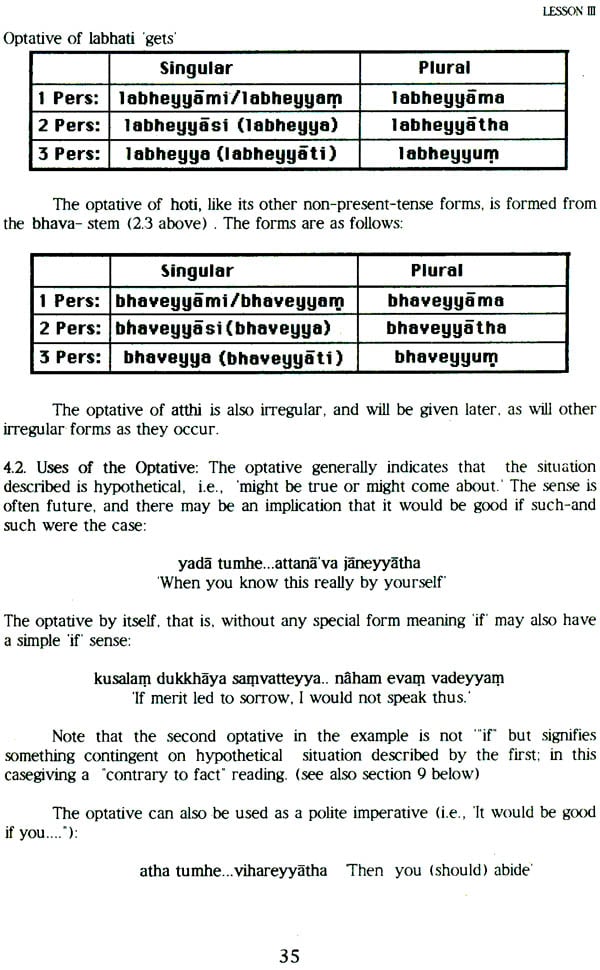 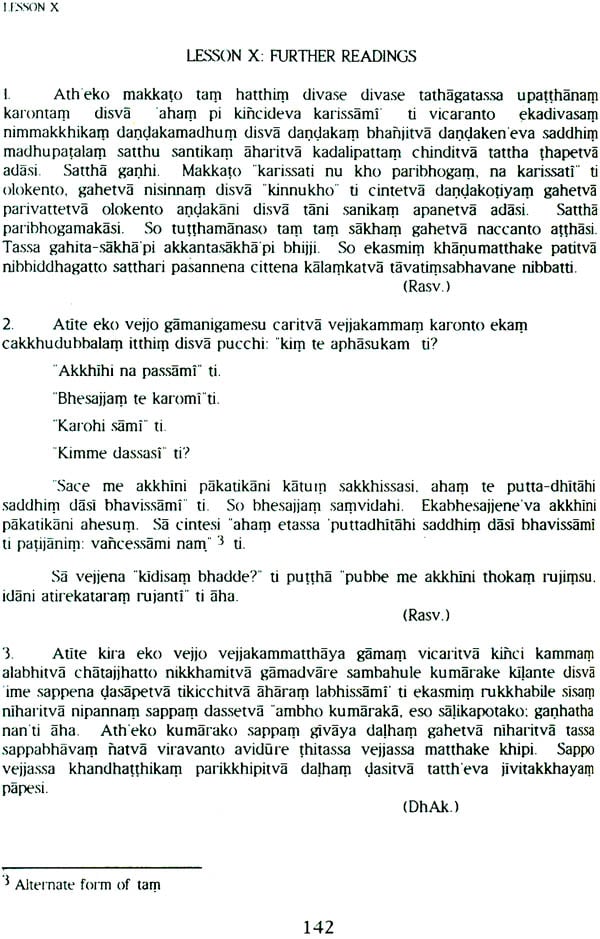 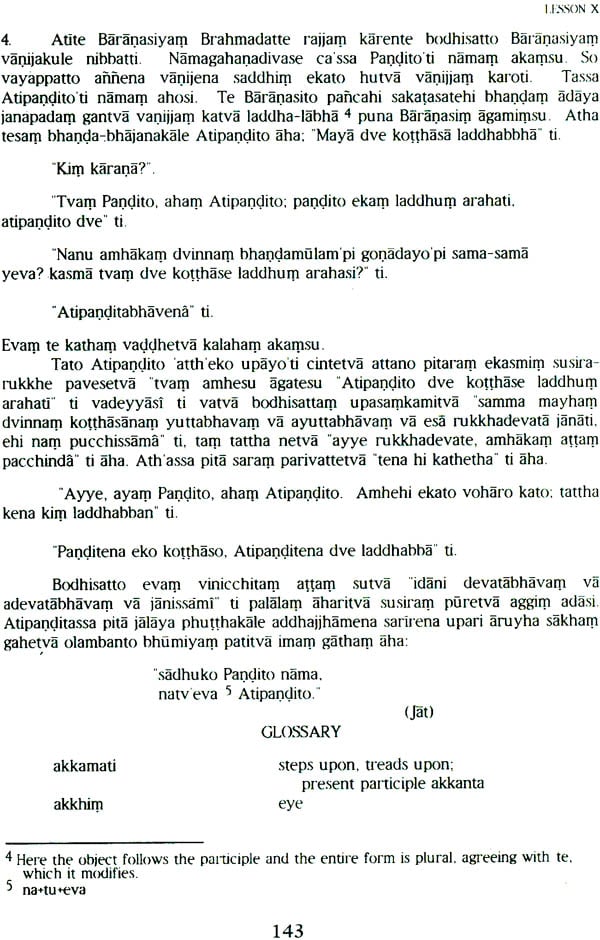 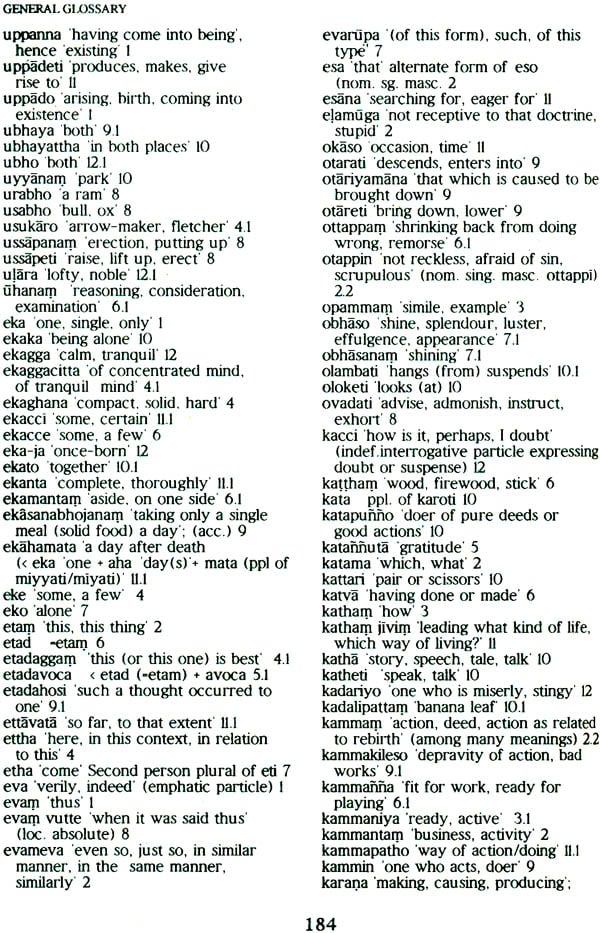 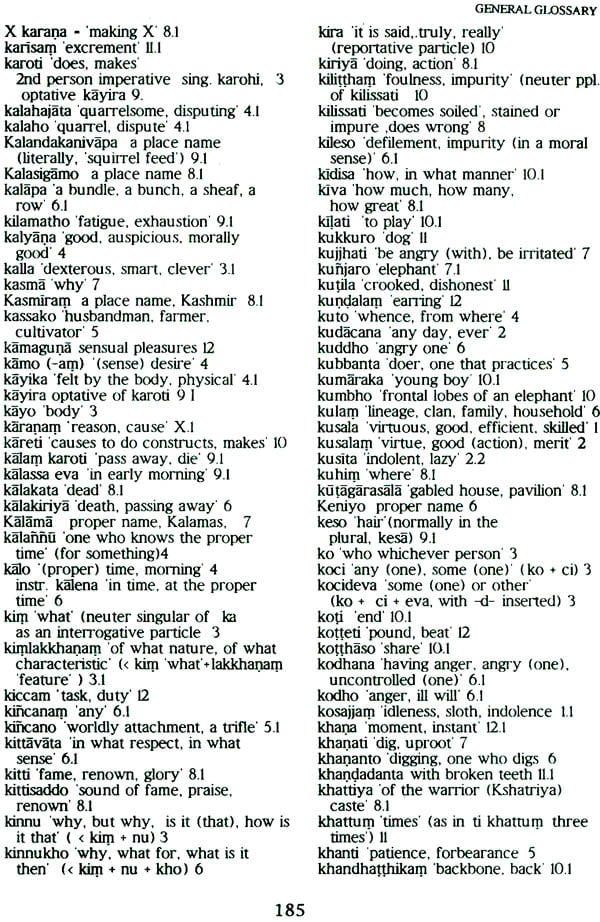 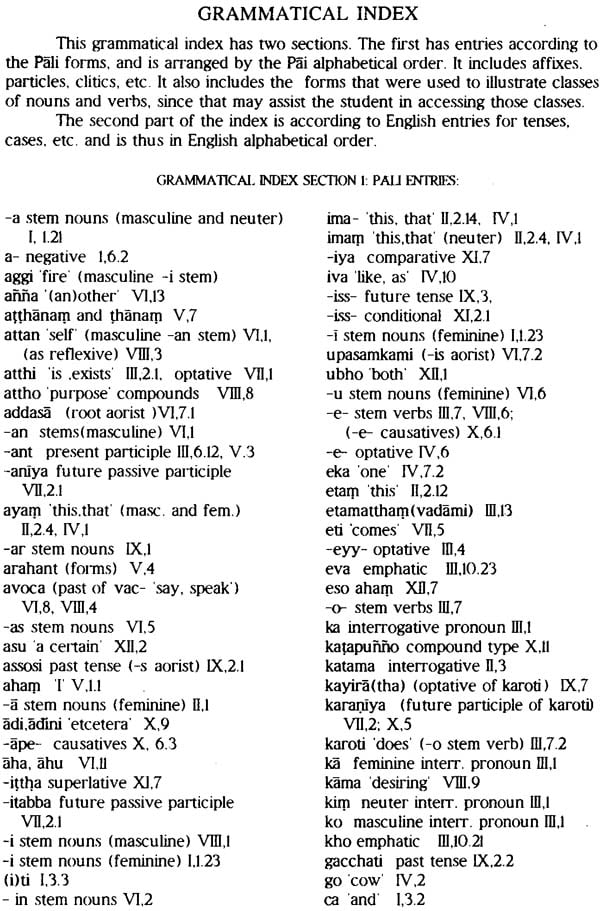 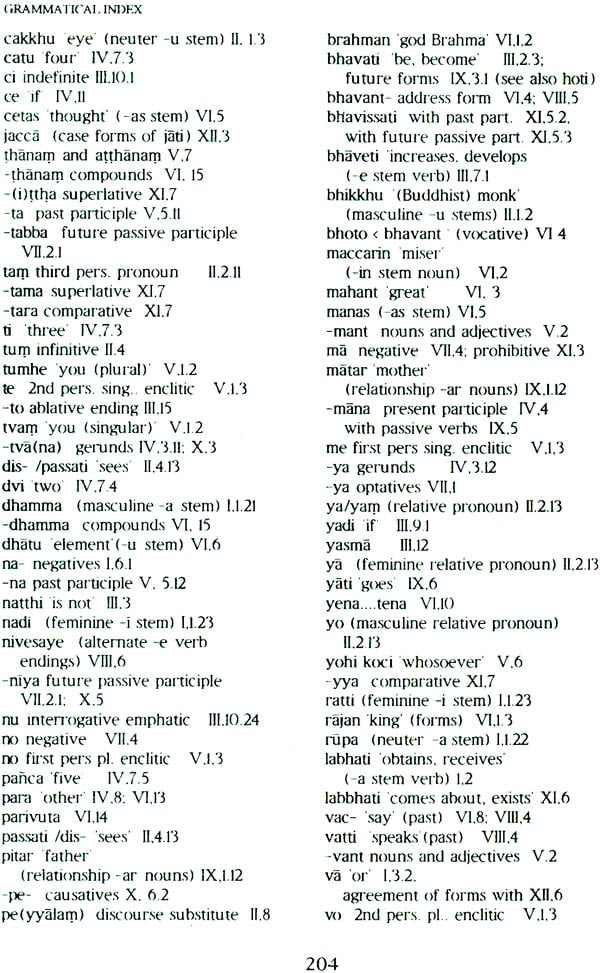 Buddhist Psychology (An Inquiry into the Analysis and Theory of Mind in Pali Literature)
By C. A. F. Rhys Davids
$31
FREE Delivery