Nalatiyar (Text, Transliteration and Translation in English Verse and Prose) 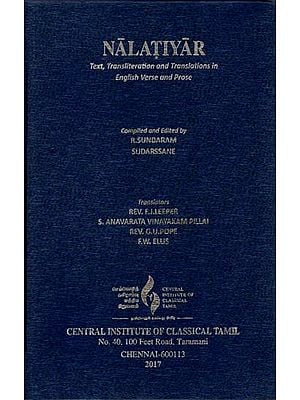 $30.00
Notify me when this item is available
Save to Wishlist Send as E-card Share by Email
FOREWORD

The Central Institute of Classical Tamil (CICT), established in Chennai, has mapped out various plans including preparation of definitive editions of forty-one Classical Tamil texts and translation of these works into English and other major European languages as well as into major Indian languages and writing of a historical grammar of Tamil. Language being the autobiography of a people, our objective is to preserve and safeguard the invaluable treasure of the literary compositions in our language. If only we could delve into our past and recover the riches and wealth of the mighty treasure trove of Classical Tamil poetry, we will be amply rewarded by its lofty poetry, the poetry that strengthens and purifies the holiness of heart's affection and enlarges our imagination. Apart from these, reading the ancient Tamil texts such as Tolkappiyam, Ettuttokai, Pattuppattu, Tirukkural etc., provides a foundation for scholarship for the present and in this sense they do provide enlightened education.

It is heartening to write this foreword to the series of publications brought out by CICT, which I am sure, will do full justice to the masterpieces in Tamil without compromising on the quality of production. The Sankam corpus being a repository of our glorious culture, it behoves our present and future generations to study them and to convey their message and the vision of life embodied in them to the public at large. Let me, therefore, commend the series to the enlightened beings the world over.

I convey my hearty wihses to the Director Mr. A. Palanivel and the Registrar Prof. Muhilai Raja pandian who have rendered their time and whole hearted involvement for the publication of the Nalatiyar

In a scholarly introduction to his English translation of Nalatiyar, Rev. G.U. Pope observes that Tirukkural and Nalatiyar are expressive of a hunger and thirst after righteousness for which the ancient Tamil society deserves the highest praise. Of the didactic works in Tamil, Nalatiyar is next only in greatness to Tirukkural and serving as mutual commentaries, they may be read as companion pieces, as indispensable works on the art of living.

The first thirteen chapters of Nalatiyar are on virtue and deal with themes like asceticism, transitoriness of youth, wealth and life, renunciation, patience and charity. The next twenty-six chapters are on wealth and deal with varied aspects of life such as rulership, happiness, suffering, ill-will, and women-chaste and unchaste. The last chapter constituting the third part of the book, deals with the salient features of love. Each chapter has ten poems and each verse is a quatrain in the elegant Venpa metre.

Nalatiyar is worthy of being studied by every generation as its message can never become irrelevant.

This combined effort deserves deep appreciation from the Institute for the intense care and minute attention to details. I am indeed most happy to appreciate the work done by them. I am grateful to the Vice Chairperson of Central Institute of Classical Tamil Prof. P. Prakasam who has given us his precious advice, support and encouragement.

After a critical analysis of the language, content and tone of the literary works concerned, scholars have come to the conclusion that the Padinenkilkkanakku (the Eighteen Minor Works) in Tamil really belonged to the post-Sangam period.

The post-Sangam period lasted upto the rise of the pallavas of the Simhavishnu line (ca.A.D. 585) and the Pandya king Kadungon (Ca.A.D.600), and is illuminated by a good number of Tamil literary works, such as the Padinenkilkkanakku, Silappadikaram, Manimekalai and the hymns of the early Saiva and Vaishnava saints. The Tamil scholars describe it as the Sangam Maruviyakalam, meaning the period which immediately followed the Sangam period.

The qualitative difference between the Sangam and the Padinenkilkkanakku periods can be gauged from the contents of their literature. It has been estimated that out of the 2381 verses of the Sangam literature over eighty percent (1862 verses) relates to love (aham), and only 519 to the rest (puram). The Padinenkilkkanakku works on the contrary contain, out of a total of 3250 verses, only 420 on aham, that is less than fifteen percent. Further, in the Sangam literature, verses giving out moral advice are just 215, 140 in the aham works and 75 in the puram, whereas, in the Padinenkilkkanakku texts the number of such verses is as many as 2790. Not only had the emphasis on ahem almost disappeared, but the prime of place has come to be assigned to the didactic aspect with the passing of the Sangam age and the dawn of the age of Morals.

Secondly, while the Sangam tradition was to treat social life as containing only the two aspects of aham andpuram, Padinenkilkkanakku added one more aspect, namely aram (morals), and even placed it first; and Tiruvalluvar, the author of

Similarly, while the kings were praised and their glories sung in the Sangam poems, men of spiritual character alone came to be praised in the latter-day compositions. Marital valour was no longer considered the greatest virtue; instead, compassion, generosity and morality were considered so.

The above-said facts would sufficiently indicate that the post-Sangam works are representative of an age different from the age of the Sangam. If the society which Ettutogai and Pattuppattu portray was the earliest documented one of the Tamils, the other one whose portrayal is found in the Padinenkilkkanakku and other contemporary works can be described as the society which succeeded it. And this latter society constituted the second stage in the social development of the Tamils.

While studying the second stage, we should note the fact that three texts of the Sangam collections, viz., Kalittogai, Timmurugarruppadai and Paripadal, are so different in character from the other seven that scholars would place them towards the far end of the Sangam age, or even a little later. In fact, their ideas and information are closer to those of the post-Sangam works.

In the thirties, V.R.R. Dikshitar had exhorted, "It is now for an earnest student of Tamil to tackle this source of information" (viz., the Eighteen Minor Works). "From what we know, none of them excepting the kural and the Naladiyar has occupied the critics' attention in such a degree as it should. It seems desirable and even imperative that a chronological study of these works should immediately be undertaken so as to utilize the materials for an authentic study of the evolution of the Tamil people and progress of their culture in a certain period of study."

Certain singular features of the Padinenkilkkanakku may also be noted, features which give them a special place among Tamil literature and therefore make their study essential. They were the first didactic works, laying down maxims on public and private conduct and ethical and social conventions, and all the ethical literature of later centuries only followed in their trail. Secondly, the earliest books of war-poems (Kalavali), ancient proverbs (Palamoli), and translation (Acharakovai) are to be found in this collection. Thirdly, while all the Sangam works are only collections of poems by numerous authors, seventeen of the eighteen works of the Padinenkilkkanakku, with the exception of Naladiyar, are by individual authors, the great Tirukkural being the first of this kind. Fourthly, unlike the Sangam poems, the post-Sangam ones do not sing the praise of any king or individual; they are apolitical.

The process of social and cultural growth is continuous and unbroken, and hence several institutions of this second stage had their roots in the first; similarly, several features of the third had their origin in the second. And, therefore, reference to the Sangam and Bhakti ages become not only inescapable, but essential. Many practices mentioned in the hymns of Appar and Sambandar of the 7th century A.D. or in the epigraphs have been taken to reflect their beginning, or even prevalence, in the previous one or two centuries, though the literature of the post-Sangam period might be silent about them.

Of these Eighteen Minor Works, the names of the poets who penned seventeen are available, while Naladiyar is said to have been a collection of stray verses composed by 400 Jain monks. On account of certain references to Kilkkanakku in the works of the 11th-14th centuries, S. Vaiyapuri Pillai concluded that the Eighteen Minor Works must have been compiled before the 11th century A.D. The anonymous controller carefully selected exactly eighteen texts to go into this collection, in order to equal the number of texts included in the earlier collections of Ettuttogai and Pattuppattu (8+10=18). Most of the Padinenkilkkanakku works contain a special introductory verse (tarsirappuppayiram), giving the name of the author, while the authors of the rest become known to as through other sources. 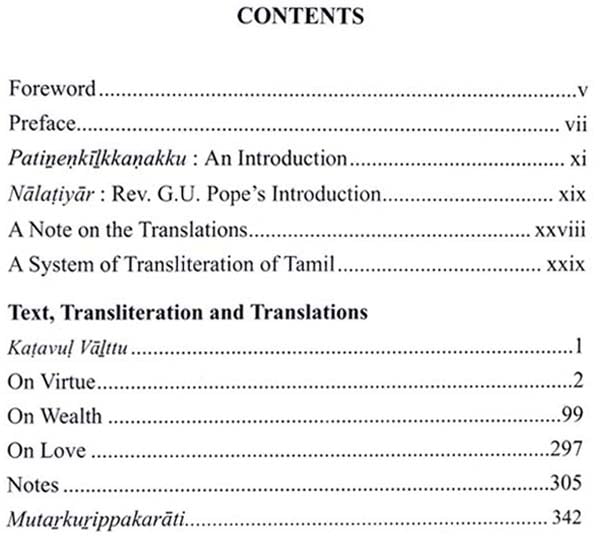 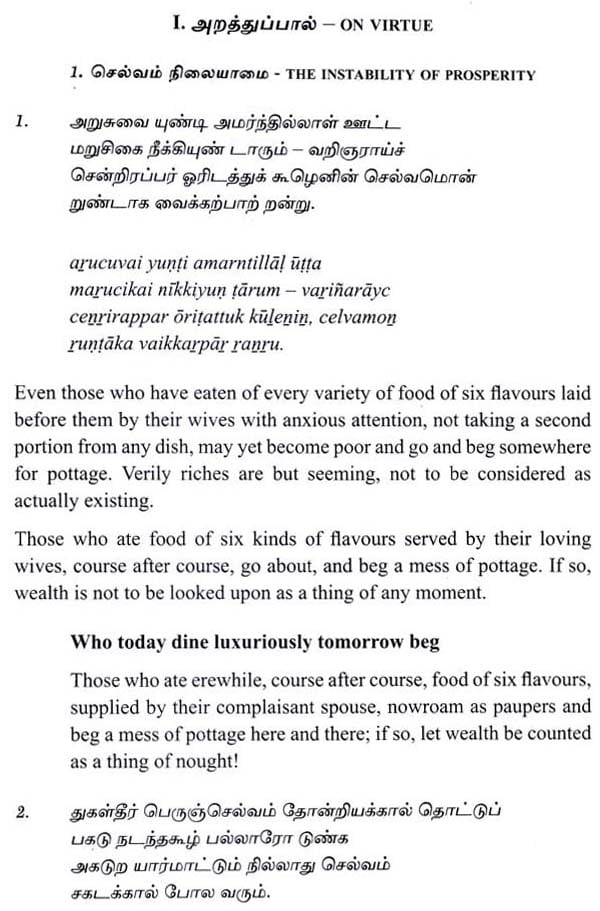 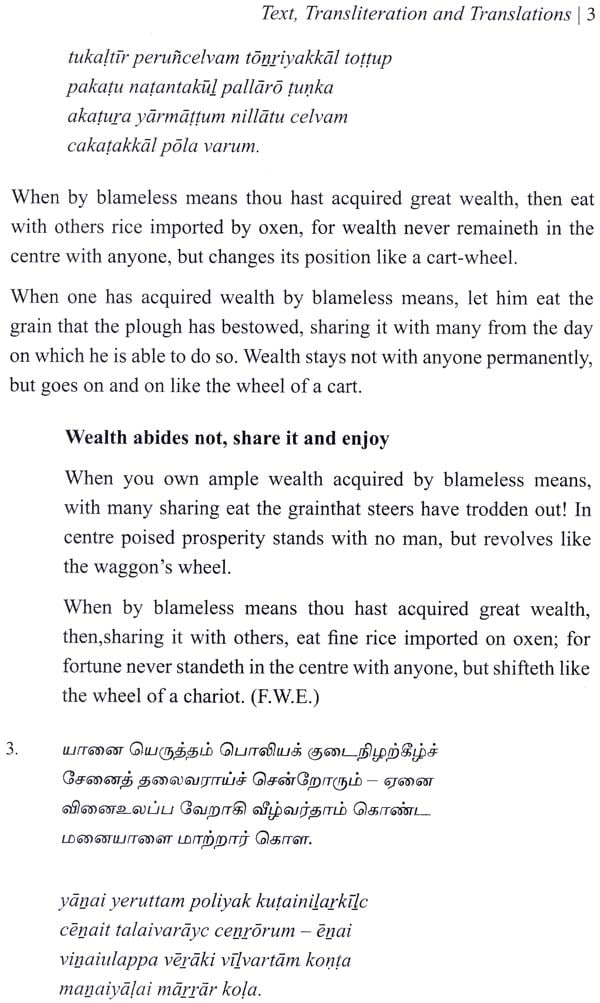 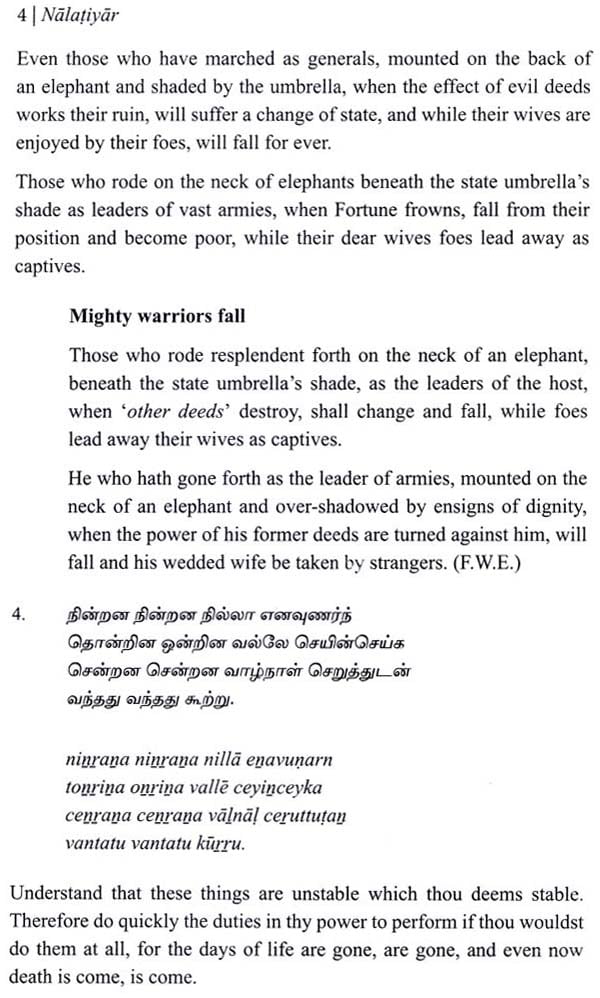 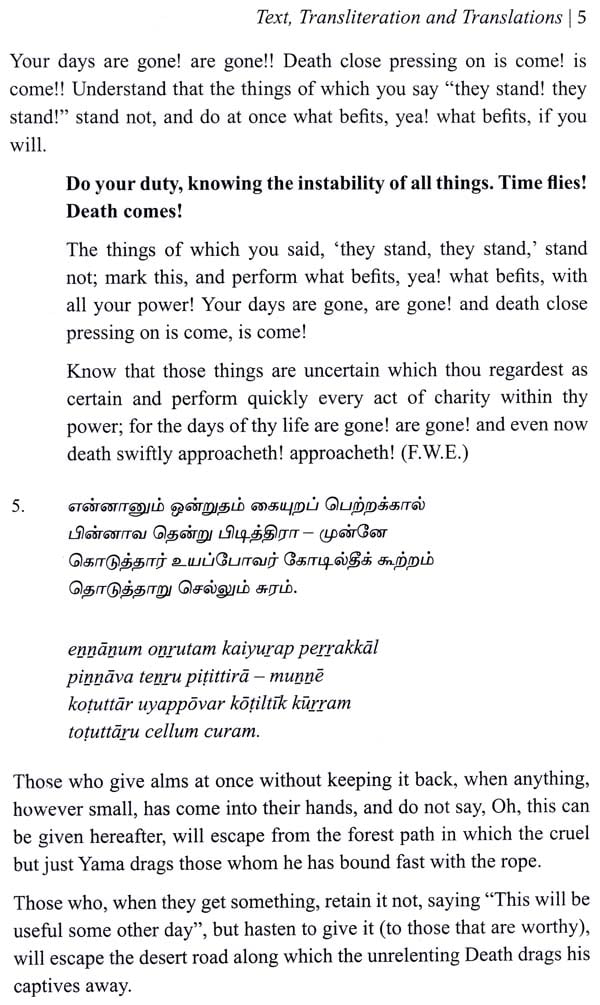 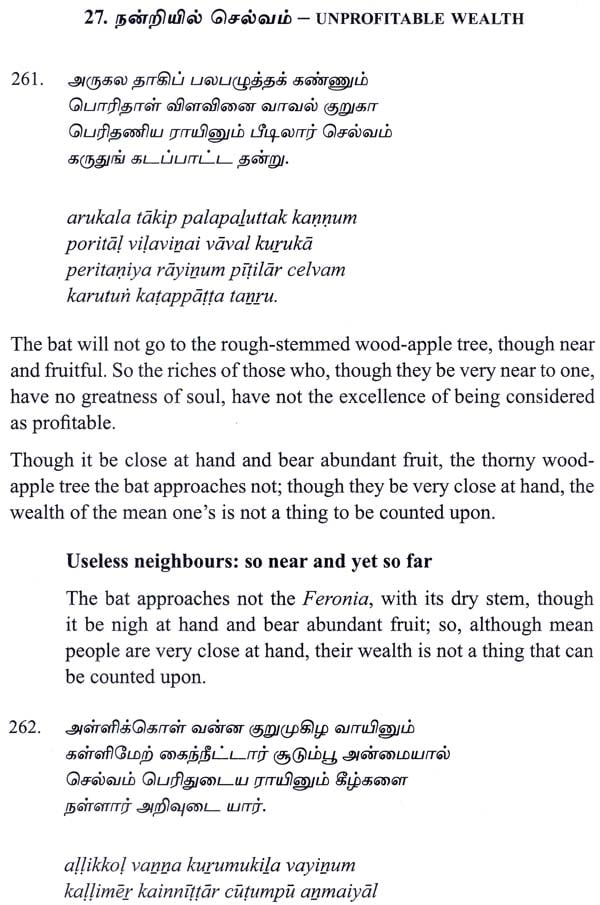 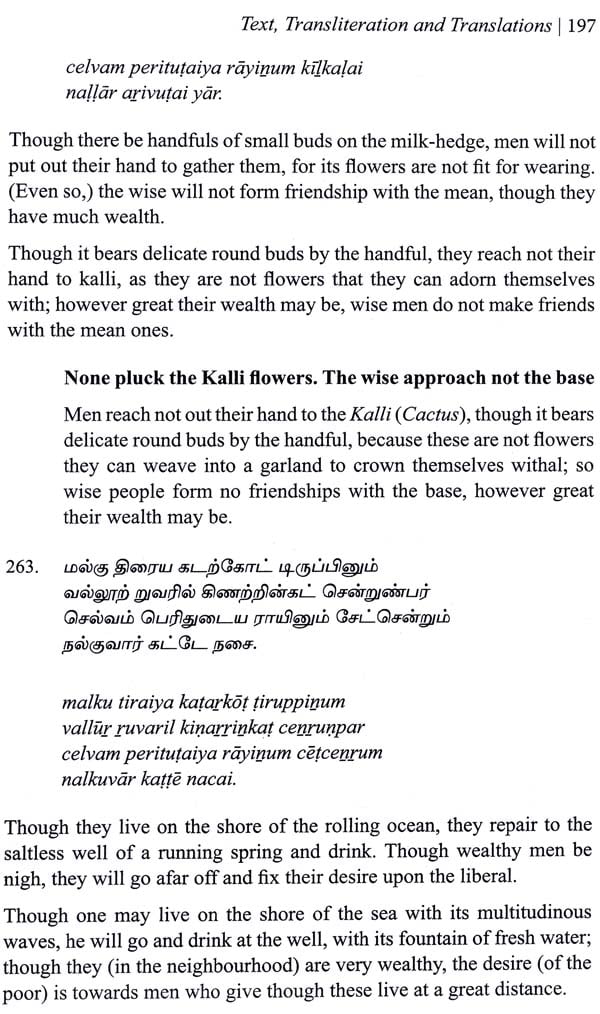 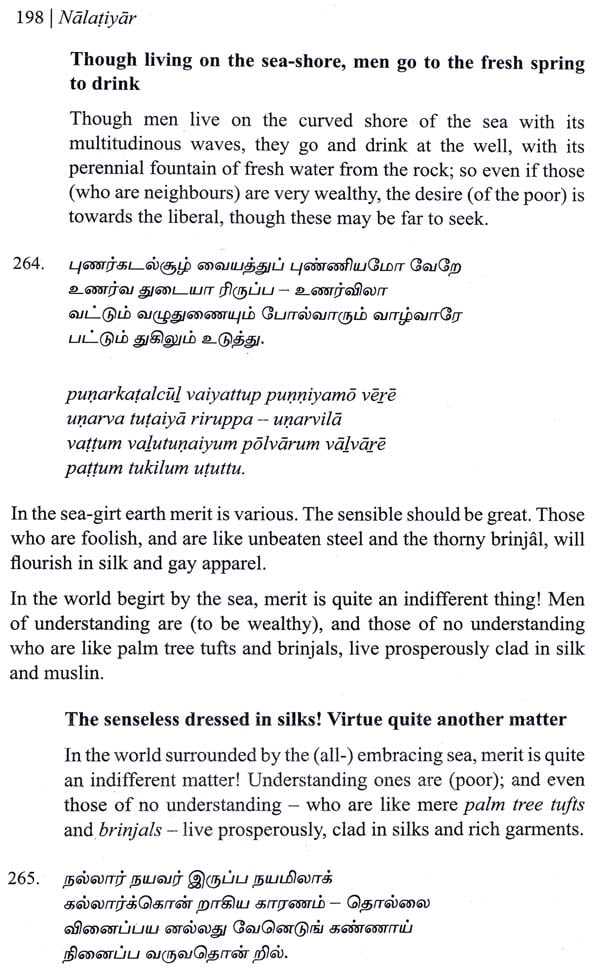 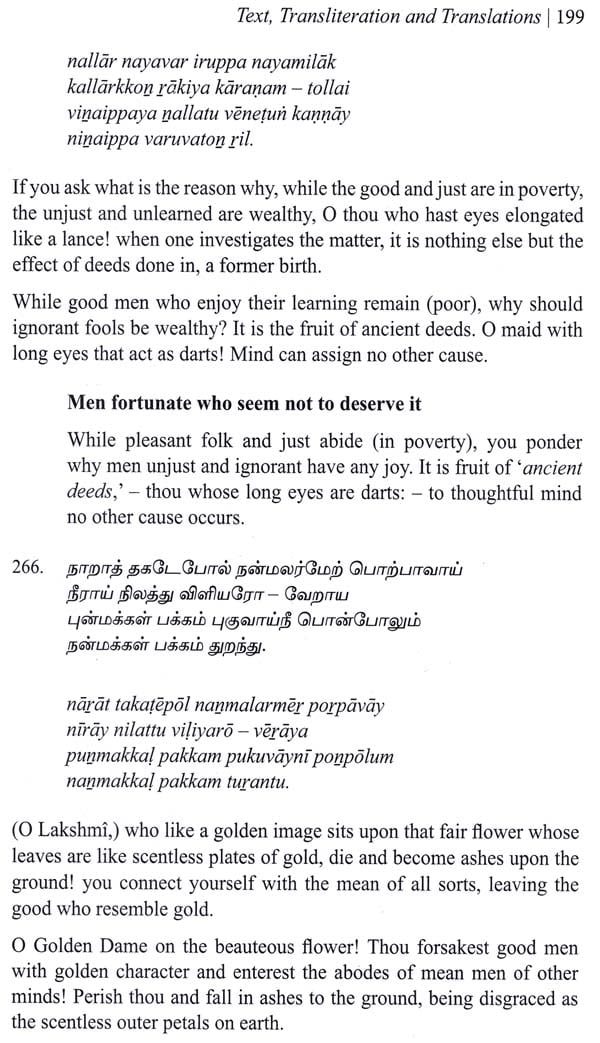 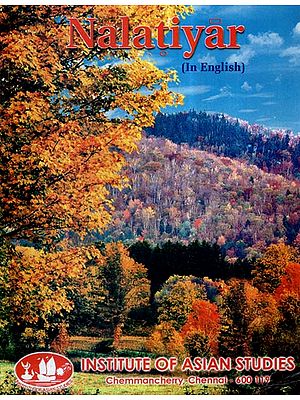