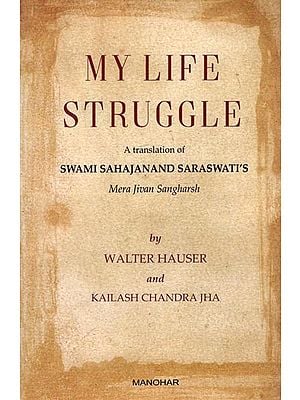 India's twentieth-century struggle for political freedom was and remains an epic achievement in the human experience. Quite apart from its global influence, this is perhaps as familiar a story as it is remarkable, given the legacy of Gandhi, among others of that small generation of founders, whose unique leadership roles are rightly considered to have been transformational in the achievement of freedom in 1947 and in the promulgation of the Constitution of January 1950. But it must then also be said that the roles of the founding leadership were balanced and in many ways defined by the people of India themselves, primarily its peasants, whether the generic masses of Gandhi's definition and direction, or the independent and self-aware peasants of the field. It is this broader peasant story, and particularly that of the deeply engaged peasants of the kisan andolan, the peasant movement of the late 1920s and the 1930s, that appears here in the words of Swami Sahajanand Saraswati. It was their shared experience, or as Sahajanand put it more pointedly and more accurately, their common struggle. In fact, Sahajanand and the peasants had lived this history, and the Swami recorded it for posterity in his 1952 Hindi memoir Mera Jivan Sangharsh (My Life Struggle), translated here by Walter Hauser and Kailash Jha. Given Sahajanand's direct involvement in this history, his representation of the peasant story from the perspective of the peasant’s amounts to a paradigm shift in how the lives of the peas-ants of India have been understood and represented over time, either in politics or in scholarship. The intimacy, detail, and ethnographic richness of peasant activism as conveyed by Sahajanand is simply unique. This is true for many reasons, not least because the peasants understood fully what their struggles and movement meant, not only in social, cultural, and economic terms, but equally so in political, conceptual, and ultimately in human terms. It was their voice, loud and clear, and hence their history.

Walter Hauser is Professor Emeritus of South Asian History at the University of Virginia in Charlottesville, Virginia. He lectured for many years at the BA level while also training advanced postgraduate students in the history of Modern India. His scholarship has focused on the politics of peasant activism, especially in twentieth-century Bihar, and the manner in which that activism has been reflected in the arena of electoral politics in the 1980s and 1990s.

Kailash Chandra Jha was born in Ranti village of Madhubani district in north Bihar. He had his secondary and college education in Patna, earning his B.Sc. (Honors) in Chemistry. He has an abiding interest in social and political activism both as participant and observer, and in identifying and preserving local-level verna-cular materials. He served in the U.S. Library of Congress office as Acquisitions Specialist (1975-87), and as Political Advisor in the American Embassy, New Delhi (1987-2012).

This is a memoir of a life and a movement. The life is that of Swami Sahajanand Saraswati (1889-1950), and the movement is that of the peasants of Bihar in Gangetic north India, Sahajanand's political base. The bond between Sahajanand and the peasants was nurtured over many years, to assume a powerful and deeply human relationship in the years from the middle 1920s through the peak years of the middle and late 1930s. Sahajanand emerged in this time as India's leading peasant activist, and the peasants as self-aware and fully engaged participants in their movement for justice on the land and freedom from exploitation by the zamindar land controllers.

It was a history that happened in close collaboration with the dominant Indian National Congress as Freedom Movement and political party, and after July 1937, in sharp confrontation with the Congress as provincial government. It is this history that Sahajanand recounts in rich and dramatic detail in his Mera Jivan Sangharsh memoir, of which this is a full English translation. Sahajanand was jailed in late April 1940 and began working on the memoir in his Hazaribagh Central Jail cell almost immediately, literally only a matter of months, indeed weeks after the recently experienced political past in which he had been, by any measure, one of the major players. This helps account for the compelling freshness, the vivid immediacy of this manuscript as we read about the emergence of a peasant voice, as well as the wider movement for India's political freedom, in which the peasants were, inevitably, also critical players. Sahajanand wrote a brief 20-page addendum in 1946, touching on his 1940-42 jail experience and essentially explaining and justifying his People's War decision of 1941. That decision was an action that served to define in many complex ways the remaining years of Sahajanand's public activism. He died in Muzaffarpur town of north Bihar in June 1950. The memoir was then published in 1952, two years after Sahajanand's death, by his Shri Sitaram Ashram, situated at Bihta in the western reaches of Patna district. This present translation is based on that 570-page Devanagari Ashram edition, the vast bulk of which (barring the 1946 addendum) the Swami had, in fact, completed in the early months of his 1940 incarceration.'

Sahajanand thought of his career as a struggle, as a life struggle, as he put it in the very title of his memoir, namely Mera Jivan Sangharsh. The nature and meanings of that struggle are revealed on every page of the memoir, from his beginnings as the son of a peasant family of notably modest means, to his brilliant early school career, thence to a life of renunciation, ascetic wandering, and deep philosophical scholarship, before returning to the world of living men and women, first as a committed social reformer, then in 1920 and influenced by Gandhi, to an even more committed life of political activism in the service of the nation. That activism, working within the Indian National Congress, turned gradually but persistently, and then forcefully, from the late 1920s to the late 1930s, to what can only be described as a symbiotic commitment to a life of justice and dignity for the kisans, that is, the peasants of Bihar, and by extension to those of India beyond. This was initially an effort to effect change in the crudely oppressive practices of the zamindar land controllers by means of accommodation and reform, but failing in those efforts, Sahajanand assumed an increasingly militant posture, which by the late 1930s took on clear ideological overtones of the Marxist left. Ultimately, however, it might be noted that Sahajanand appealed to classical Hindusim in interpreting the very idea of social revolution in Indian terms. This was in his Maharudra ka Mahatandava pamphlet, certainly one of the last essays to appear in print before his death in 1950. There he argued that the landless agricultural labourers of India were becoming increasingly aware, and that when fully aware would engage in the final "dance of destruction."2

While many elements of this history are entirely familiar, certainly as they touch on the Gandhian phase (and Gandhian view) of Freedom Movement politics beginning in the early 1920s, it is important to remind ourselves that this is memoir as history. In other words, this is Sahajanand's remembered history, based on his personal lived experience, not only as a committed worker of the Indian National Congress, but as the most prominent peasant activist of his day. And thus, if it is Sahajanand's story, it is by definition also that of the peasants. It is, in fact, their common story, or, to use Sahajanand's more accurate and appropriate term, their common struggle. It was a struggle, which, in the 1920s and especially the 1930s took the political form of a vital and dynamic peasant movement, a kisan andolan, whose goals were expressed in clear, direct, and unambiguous terms. If this movement and the local and regional struggles which defined it were in fact the voice of the peasants, as this remarkable first-person account makes so very clear, it then inevitably follows that the goals and objectives of these struggles and activisms were also conveyed in the spoken and conceptual language of the peasants. That is, the peasants had a clear and independent (and entirely human) understanding of the issues and how to respond to them in what we can best describe as indigenous, vernacular, Indian, cultural (and political) terms. In the wider literature, this sense of understanding and response is appropriately described as peasant consciousness. The point here is simply to reinforce the compelling representation of Sahajanand that in the India of the 1930s, this engagement between self-awareness, understanding, and response, this peasant activism, this kisan andolan, however much it may have been influenced by the overarching presence of the colonial state, was at the same time a distinctively Indian phenomenon. 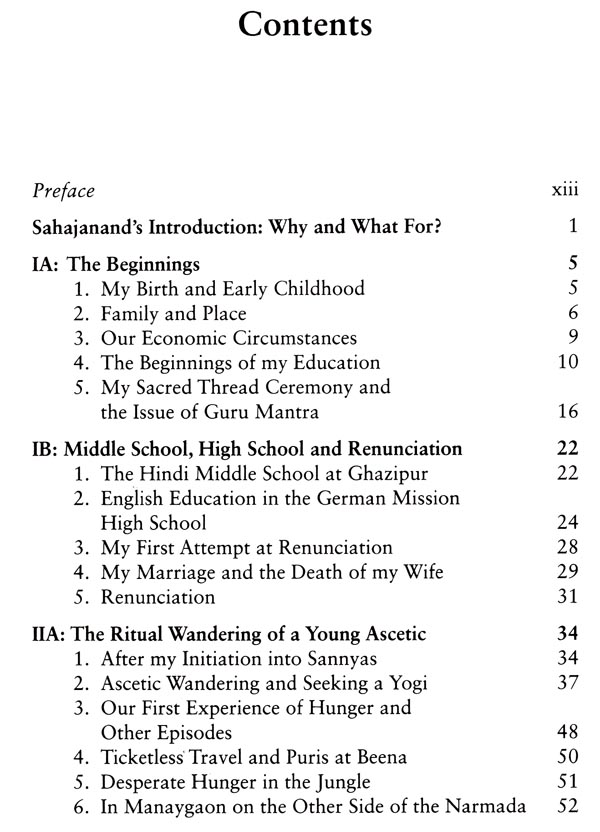 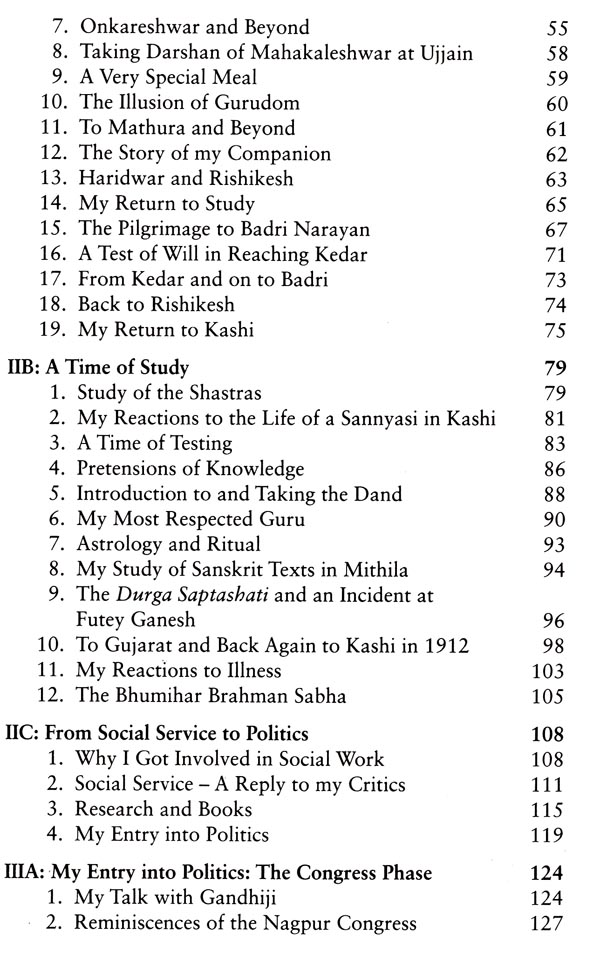 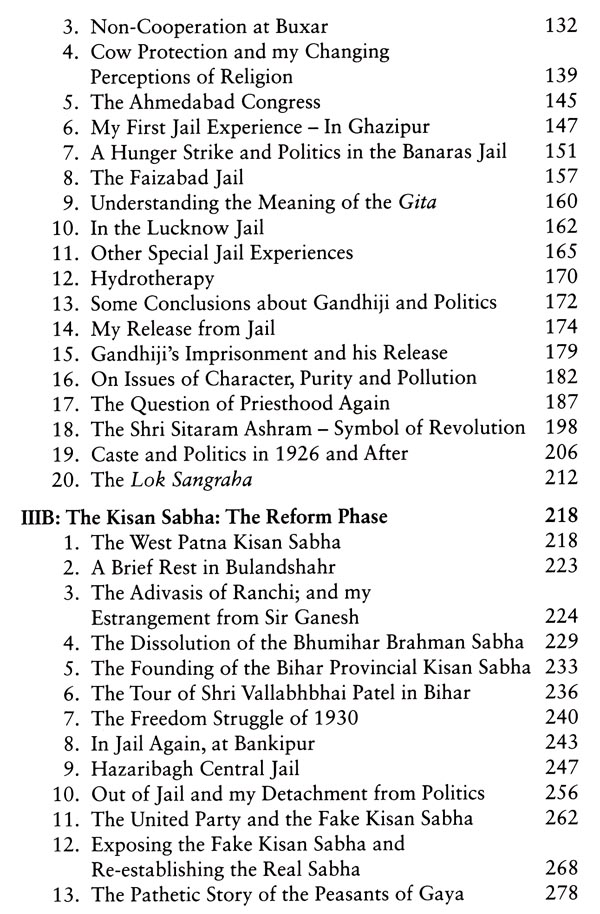 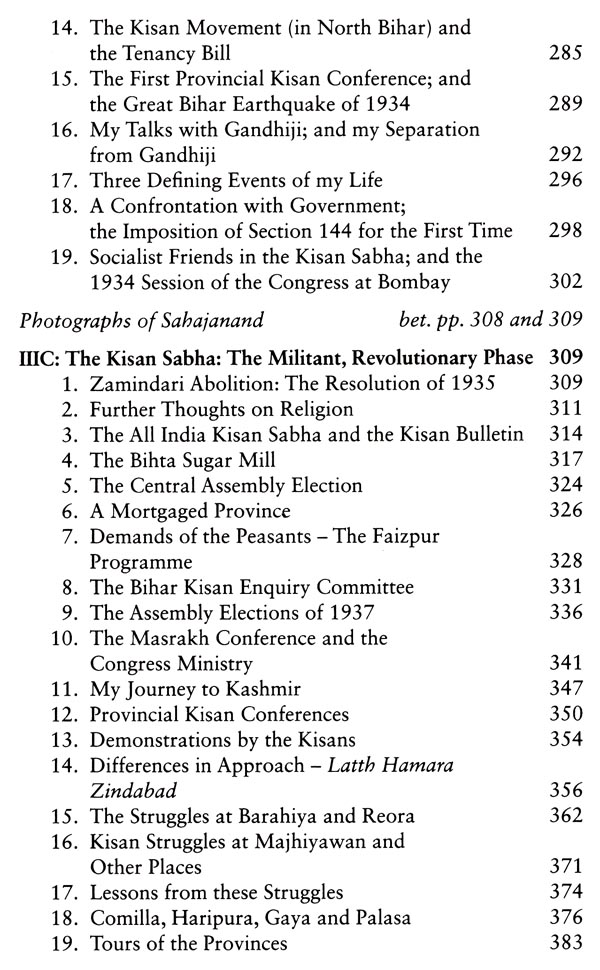 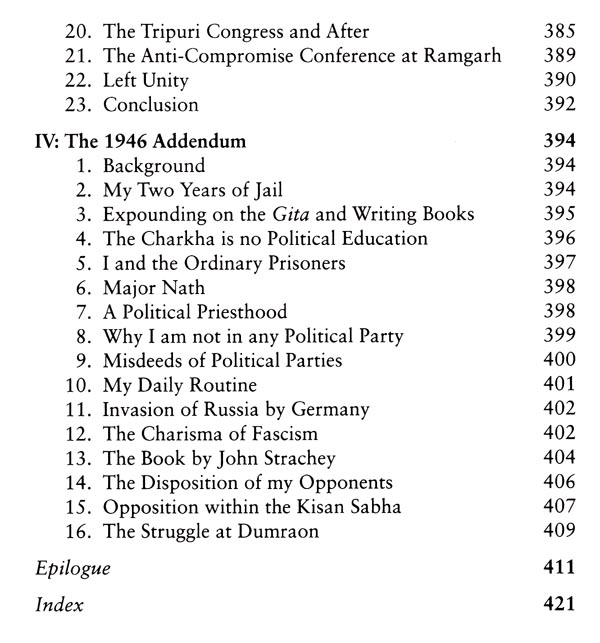 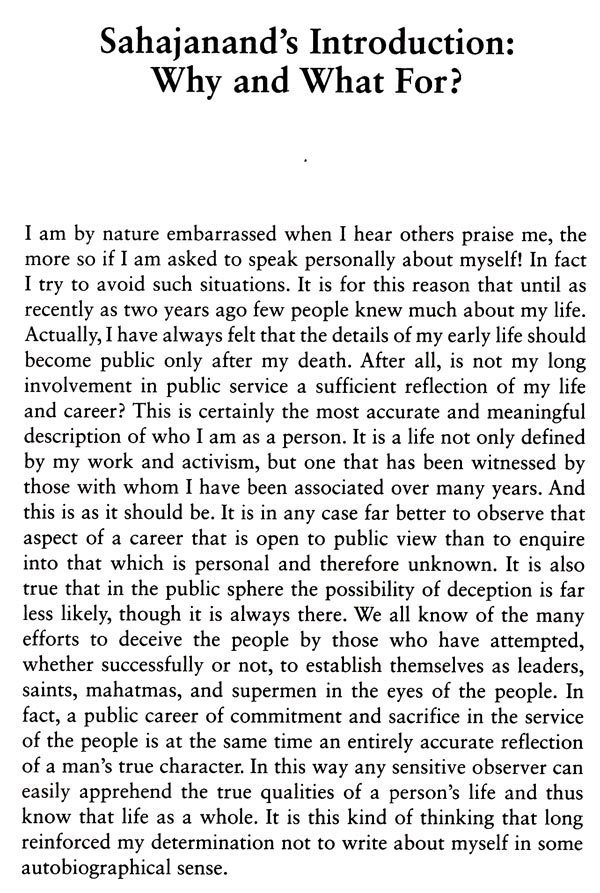 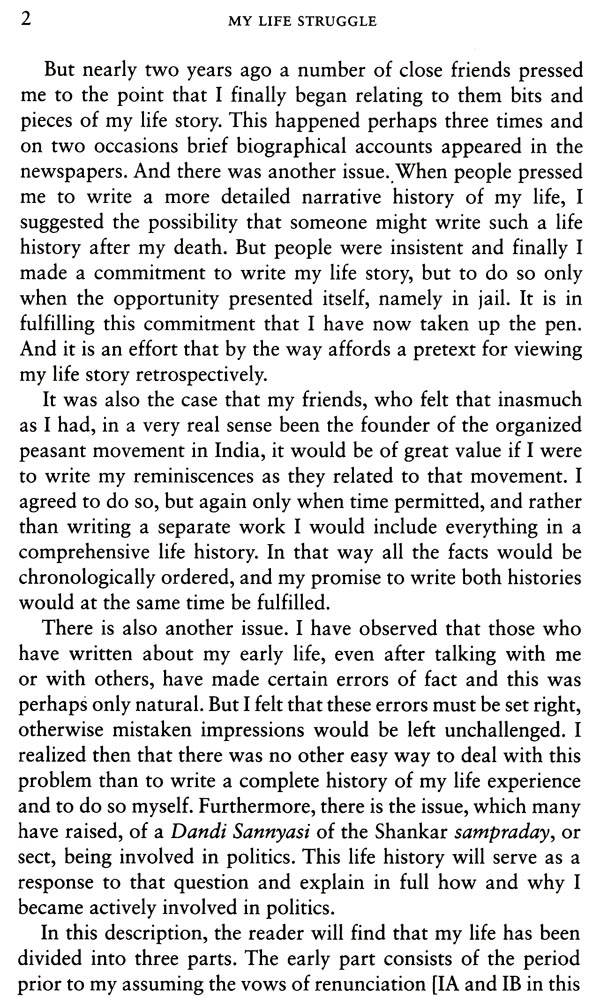 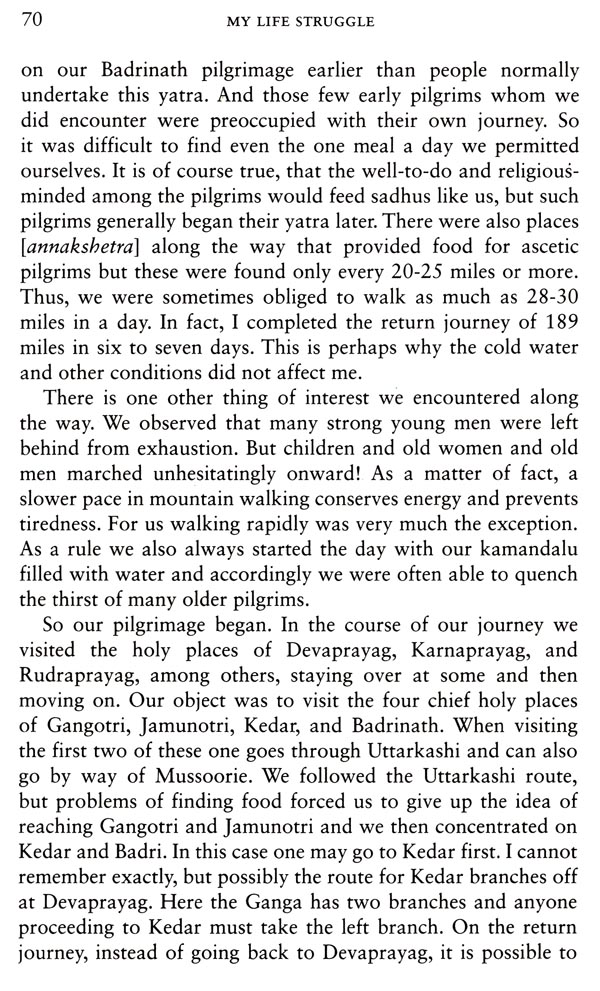 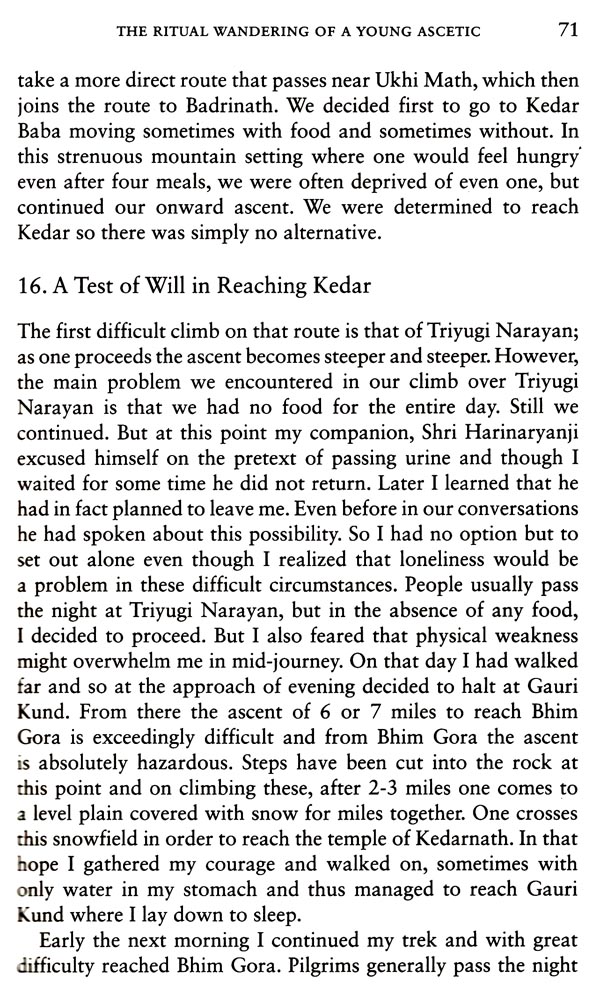 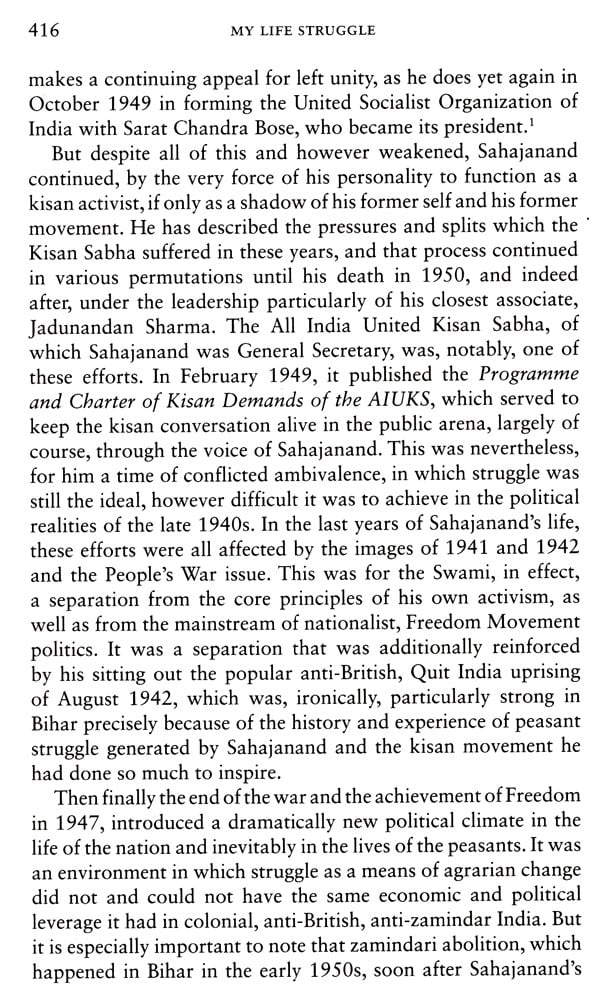 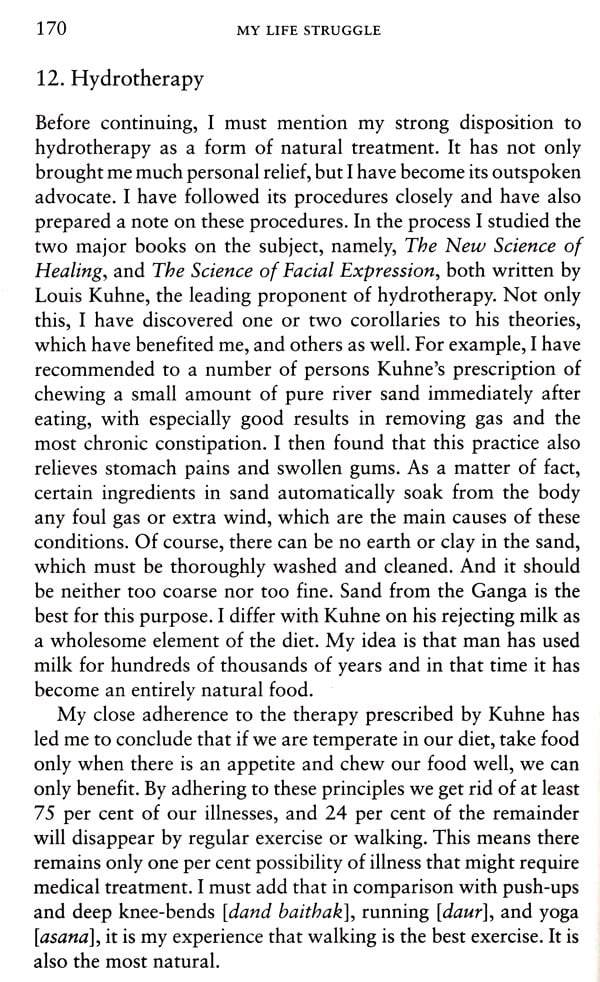 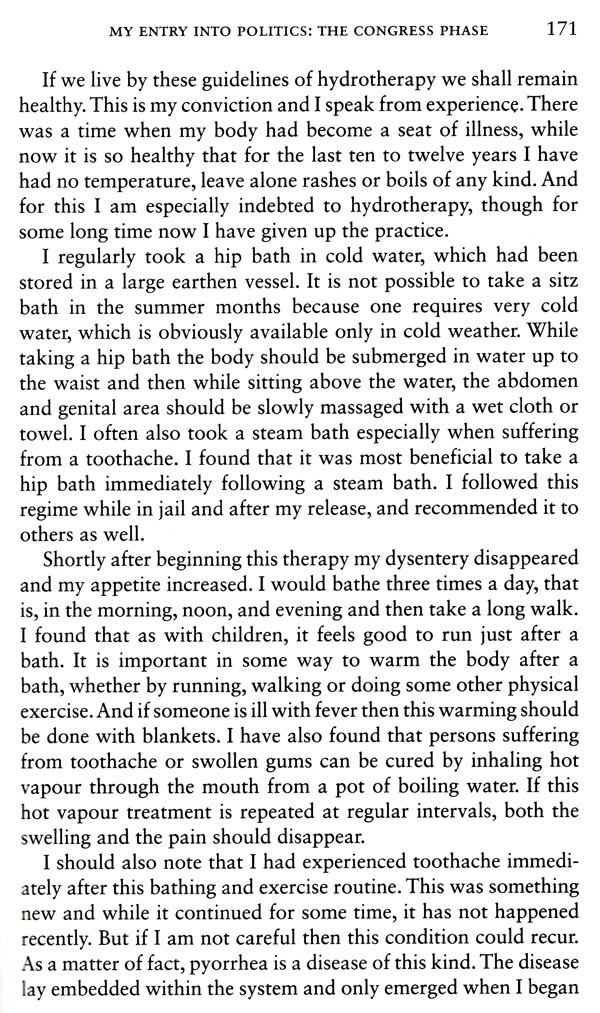 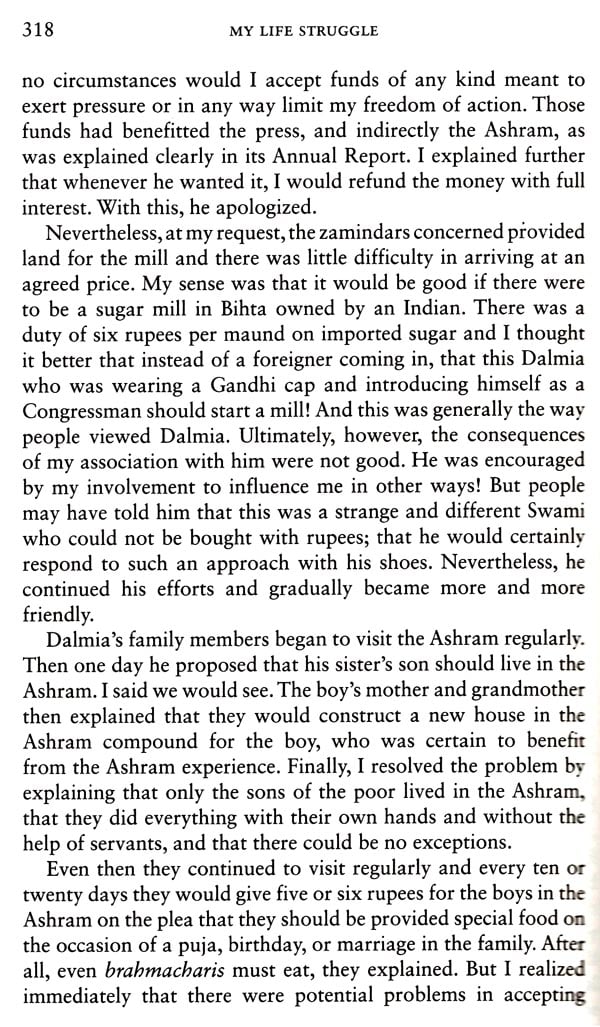 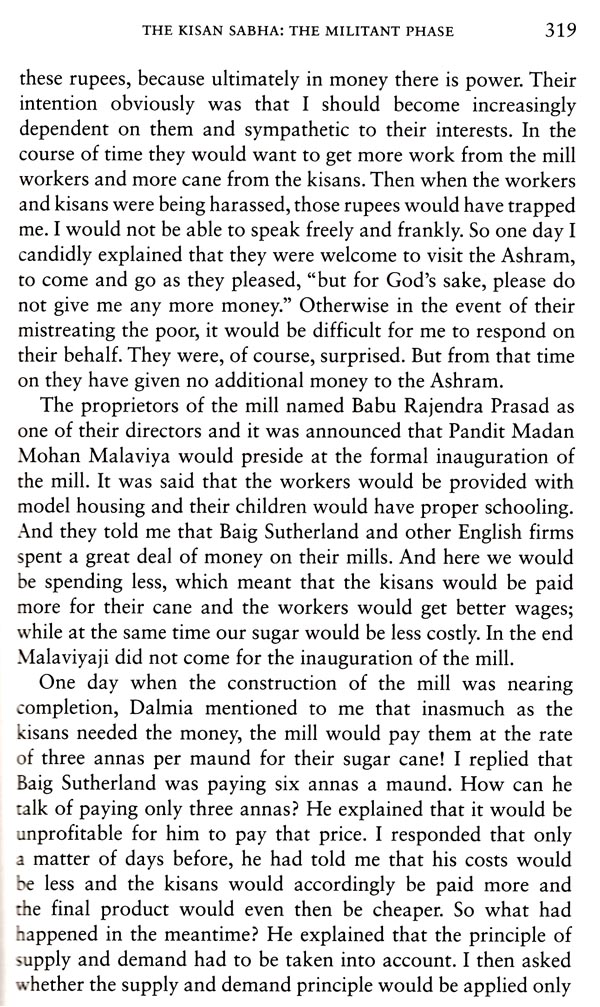 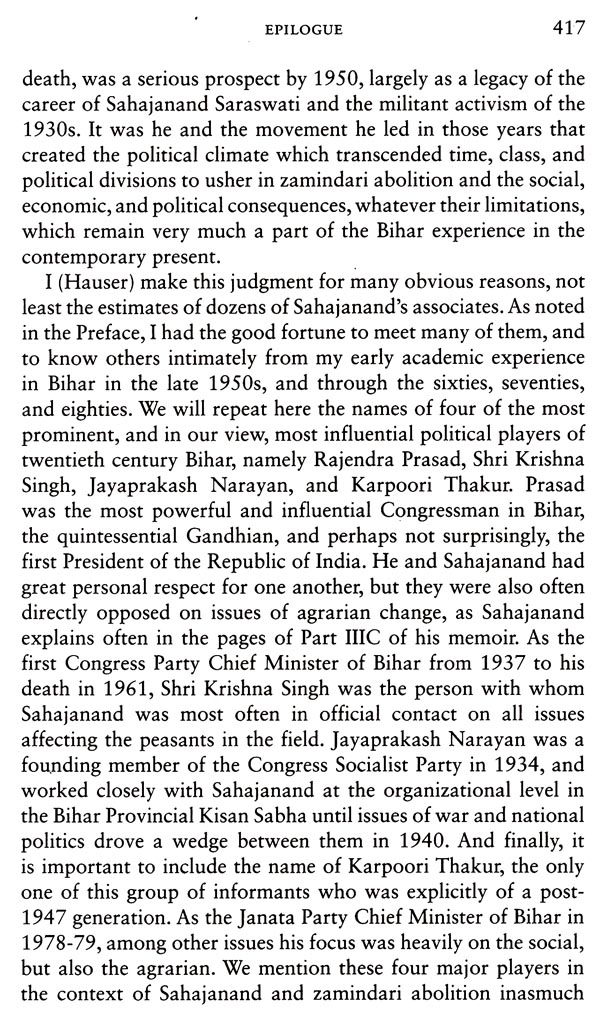 Samnyasin in the Hindu Tradition (Changing Perspectives): Containing Interviews with Many Sannayasis of Today
By T.S. Rukmani
$43.00