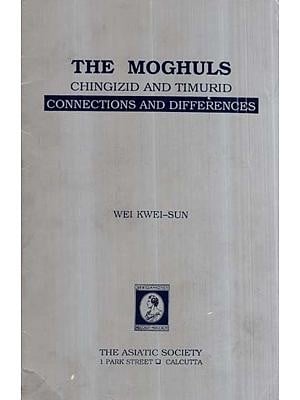 The Moghuls Chingizid And Timurid Connections And Differences

With the posthumous publication of The Moghuls, Chingizid and Timurid: Connections and Differences by Professor Wei Kwei-Sun, the Society pays tribute to the scholarly scholarly achievements of an outstanding Chinese scholar who spent a large part of his life in this country. Professor Wei came to India in 1943, with a Masters from the National Chinghua University at Beijing, and was awarded a Ph. D. by the Aligarh Muslim University for his thesis on 'A History of the Mongol Dynasty' in 1946. He joined the Cheena Bhavan at Visva-Bharati, where he served as Professor and Head of the Department of Chinese Language and Culture from 1976 to 1980.

Professor Wei, who passed away in 1995, specialized in la field that remains inadequately explored- the world of trans-Asiatic connections and movements, political and cultural. His publications include the Secret History of the Mongol dynasty (1957), A trans-Asiatic Link of Buddhist Chronology (1991), The Length of Fa Xian's Account of his Travels and the Chronological Data therein (1991), with his knowledge of several Asian languages, his painstaking study of Amanuscripts, and his analytic mind, he was able to bring to light several aspects of the history of the region that has remained undiscovered.

His last work, The Moghuls, Chingizid and Timurid: Connections and Differences, provides a rich store of information and insights that should contribute substantially to future studies n the field, particularly in terms of the clarifications that Professor Wei offers. The Society takes pride in Being able to add yet another item to its prestigious list of publications.