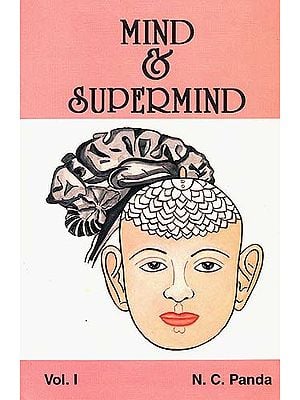 $100.00
Ships in 1-3 days
Notify me when this item is available
Save to Wishlist Send as E-card Share by Email
From the Jacket

Astonishingly rich is the heritage of Indian psychology. Embodied in some of the better known, traditional philosophical systems, it convincingly spell out the rationale behind memory, recognition, emotions, instincts, reasoning, creativity, and myriad other mind related phenomena, which sofar remain baffling, unanswered question in modern cognitive science, mechanistic psychology and their kindred discipline. Mind and Supermind, for the first time, systematically unfolds vedantic psychology in its larger effort not only to evolve an integrated perspective on mind, but also to synthesize ancient wisdom with contemporary sciences.

A distinguished scholar of Sanskrit, philosophy and science, professor Panda here re-explores the nature of mind, its Indian concept and how it compares with its Western world-view: religious, philosophical, psychological and scientific. Thus elaborating the concepts of mind as set out in the Sankhya, Yoga, Tantra, Vedanta and other orthodox systems vis-à-vis (a) philosophical perspective: from Plato and Aristotle to Wittgenstein and Strawson, (b) psychological viewpoints of William James, Freud Jug, Watson and others, (c) theories of modern physiologists governing brain, mind and artificial intelligence; the author builds a solid foundation for the supernatural of parapsychological phenomena. And also speculates about the possibilities for mind to link up with the Supermind which in Vedantic concept, is Brahman: fundamental Consciousness that illumines everything-living and non-living.

Nrusingh Charan Panda is the 1929-born scientist Emeritus-Having retired form the Orissa University of Agriculture and Technology, Bhubaneswar, as Professor and Dean of the Veterinary Faculty. Notwithstanding his specialization in Nutritional Biochemistry with M.Sc. and PhD degrees of the University of Missouri, Columbia, USA, Dr. Panda is essentially a versatile personality, combining in him the endowments of a scientist, a Sanskritist, a philosopher, and a litterateur. And his achievement have been recognized, at different times, with a number of prestigious awards honours, like the Membership of America's Gamma Sigma Delta Society, Orissa Sahitya Academy Award and Sarlala Award.

Internationally reputed for his scientific interpretations of Vedic literature. Professor Panda has also authored the widely acclaimed books: Maya in Physics and The Vibrating Universe. His is at once integral, synthetic, holistic approach.