A Matter of Taste: The Penguin Book of Indian Writing on Food

FREE Delivery
$31
Quantity
Ships in 1-3 days
Notify me when this item is available
From the Jacket:

A delectable collection of writing on food and its place in our lives that brings together some of the most significant Indian voices over the last century.

From lavish meals, modern diets and cooking lessons that serve as a rite of passage to fake fasts and real ones, fish and fiery meals that smack of revenge, this book has something to satisfy every palace.

Gandhi's gift-ridden account of his failed flirtation with eating meat starkly complements Ruchir Joshi's toast to the senses as he describes his characters discovering a truly alternative use for some perfectly innocent shrikhant. In unique gastronomic takes on history, Salman Rushdie, Amitav Ghosh and Saadat Hasan Manto ensure that we will never look at chutney, a Tibetan momo or jelly in quite the same way again. Food becomes the les appetizing religious 'line of control' for Abdul Bismillah's 'guest' when a simple meal illustrates the rather thin divide between guest and host, while subtler shades of deprivation mark Anjana Appachana's Anu as she keeps a fast that reeks of prejudice. And in faraway lands, 'across the seven seas', the search for fresh fish accentuates the loneliness of a life without familiar moorings for Jhumpa Lahiri's Mrs Sen even as Anita Desai's Arun learns from his American hosts the importance of 'keeping the freezer full'.

As much about food as it is about good writing. A Matter of Taste serves up a veritable feast for the senses and food for thought to sample or devour, as one pleases.

Even an anthology has to begin somewhere, and this one eventually found its moorings in memory. Fictional ones, drawn from books we've read, loved and been challenged by; and more personal ones, the ,kind we all carry, of meals eaten and new tastes, of times of deprivation and moments of sharp, new pleasures.

When Penguin suggested an anthology built around the idea of food, Diya and I speculated about the shape that such a compilation would take: did we want an anthology of Indians writing about food? An anthology of writing about Indian food? They are two very different beasts and, as we talked, other monsters loomed hungrily in the distance. The possibilities were endless.

Uncharted continents began opening up before our dazzled eyes, great landscapes where I. Allan Sealy's Smarmite shared the same table as Kesavan's all-inclusive, nationalist feast from Looking through Glass, and Daniel and Rarndoss made a mango pilgrimage of India (and, in the literary magazine Biblio, a controversy broke out over whether 'Blue Mangoes' was really a slang term in Tamil for certain unmentionable parts of the human anatomy). Frank Simoes expanded on the virtues of fresh fish in conjunction with Goan feni; but read Rohinton Mistry if you want to learn, in mellow comic fashion, about the perils of placing too great a premium on the freshness of your chicken. The famine of 1905 found several echoes down the ages, in mutated form, as Apu endured hunger in the middle of plenty, as a bull died from starvation in Sarat Chandra's 'Mahesh' ...

Feasting, whether at a nationalist's banquet or in the presence of royalty, was always accompanied by its counterpart. The guide fasts twice, first as parody and then with genuine fervour in R.K Narayan's masterpiece; in America, Anand discovers the strangeness of those who mortify their flesh in the middle of plenty as he explores the polarities of fasting/feasting; Manjula Padmanabhan's protagonist undergoes the thoroughly modern ritual austerities of The Diet. There were resonances, if you only cared to look for them. The caste norms that applied to Mulk Raj Anand's eponymous untouchable in the bad old pre-Independence days are refurbished for the times. And food is the ultimate religious divide. If an earlier generation rode the rails to the cries from vendors of ' Hindu pani, Musulmaan pani', Abdul Bismillah's guest in 'Guest is God' discovers that hospitality stops short of the dinner plate.

Compiling an anthology is a very, very demanding task. It requires the editor to spend most of her time lounging around in comfortable chairs, reading old favourites and devouring new titles to the detriment of anything resembling real work. Occasionally, in a Herculean display of astonishing effort, she sends a passage to the photostat man in the market. (He runs a small chaat centre alongside, where the pungencies of chutney and chaat masala are overlaid by the fumes of printer's ink-not an effect Vir Sanghvi recorded in his investigation into the origins of the ultimate snack, bhelpuri, but interesting all the same.) It is a task that requires, most of all, the strength of mind to ignore the anguished yelps from the good souls at Penguin as yet another deadline whooshes by.

But as the months rolled by, something happened. Overlapping with the insistent voices of authors-some newly minted, some flashing the stamp of Globalized World-Famous Author on their passports, some obscure-was the voice of memory, insisting that I take another look at the stuff we routinely bury in our bodies.

Initially, I had thought I wanted an anthology that provided a banquet, a feast for the senses. I wanted passages as evocative as the dismissive list of Indian dishes ('chooey-booey brown sauce') compiled by E.M. Forster, as wickedly contemporary as Busybee's evisceration of hotel offerings in 'My First Buffet Lunch', as directly sensual and funny as the passage from The LastJet-Engine Laugh where Ruchir Joshi's characters discover truly alternative uses for shrikhand.

With honourable exceptions, including the three offered above, these were the most boring passages to read. Writing about food degenerates swiftly into a version of what a bad newspaper food critic-for a mercifully brief while I was one of the breed; I know whereof I speak-will serve up. With the exceptions of Vir Sanghvi and the late Busybee (both included here), and a handful of contemporary writers-Marryam Reshii and Geeta Doctor among them-most of India's 'food columnists' offer little more than warmed-over restaurant reviews or recipes, neither of which tempt the palate.

Nor did I want an anthology filled with learned essays on when exactly the potato came to India, or endless categories of food recommended by the Shashtras, or pieces quibbling over the shopping habits of the Mughal cooks. This is perverse on my part, given that I would gladly read such an anthology. But I wanted nothing to do with the compiling of it. What the stack of books before me promised, and what I was looking for, had to do with a certain kind of writing about food and its place. in our lives. Some of the examples that follow are drawn from my store of personal memories: every reader will have his or her own, naturally.

The first section, 'Individual Portions', offers an overview of Indian food, quirky rather than comprehensive, thought-provoking rather than magisterially opinionated. Salman Rushdie explores nostalgia for naan and leavened bread even as he discovers the joys of brioche and foccacia abroad; an old woman in Githa I-Hariharan's 'The Remains of the Feast' discovers the pleasures of forbidden food on her deathbed. They're both reminding us that food is also about what's withheld, unavailable, banned.

And there's the nature of what we eat to take into consideration. Behind the story of the chicken bought and nurtured and finally slaughtered with so much care by Gustad Noble in Mistry's Such a LOl1g Journey, I glimpsed the minor childhood trauma I experienced as a guest in a relative's house in Bokaro. Someone pointed out the direct connection between the absence of one or another of my feathered playmates and the presence of chicken curry on the table. Until then I had never given much thought to the difference between animal and vegetable and the violence inherent in many of the normal rituals of eating. Living is about killing; what we choose to bury in our bodies and what we choose to exclude says a great deal about us.

For some, the idea of eating meat raises Plato's chant in their heads: 'you are placing parts of a corpse in your mouth'. Some version of that chant is what Gandhi must have heard when he briefly took up meat-eating only to repudiate it thoroughly. (Non-violence in a nutshell, as generations of weary textbook writers have reminded us. They always skim over the other possible metaphor, the one that might remind us that perhaps the body politic could do with one of Gandhi's prescribed enemas on a regular basis.) For others, like Sudha Koul, the dilemmas are different: the perfect meat dishes produced by Koul's Kashmiri cook are a metaphor, not for the taking of life but for the loss of the past. The remembered odours from her Kashmiri kitchen are constant reminders of a time of innocence, now irrecoverable.

'History on a Platter' sets off on a brief exploration of the twentieth century through our palates-treat this as an indicative rough guide rather than a detailed map. If you look at the history of contemporary India through the palates of its people, you navigate with an alien but illuminating set of charts. Mukul Kesavan's short exposition on the truly nationalist feast brings together the best of Indian cuisine in an unusual menu. The taste of Independence must have been a curious blend, an uncertain mix, everything, no matter how fresh, tainted by the iron scent and flavour of the blood spilled over Partition. One of Manto's short shorts, 'Jelly', sums it up: there's the foreign object of desire, imported or newly indigenized jelly, more tempting than our syrupy, heavy sweets because of its wobbling blandness, but it's the ingredients that make it stand out. 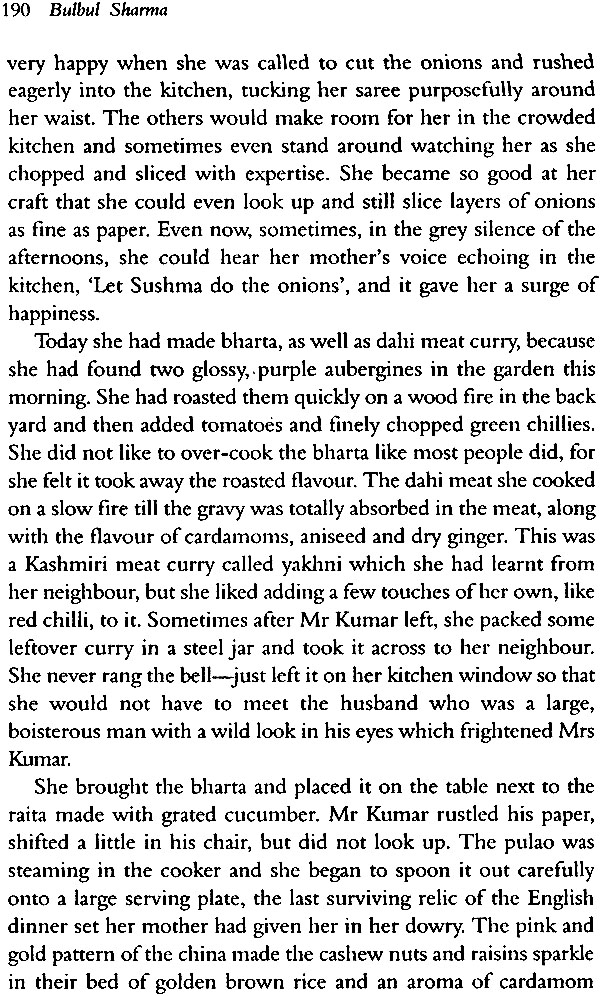 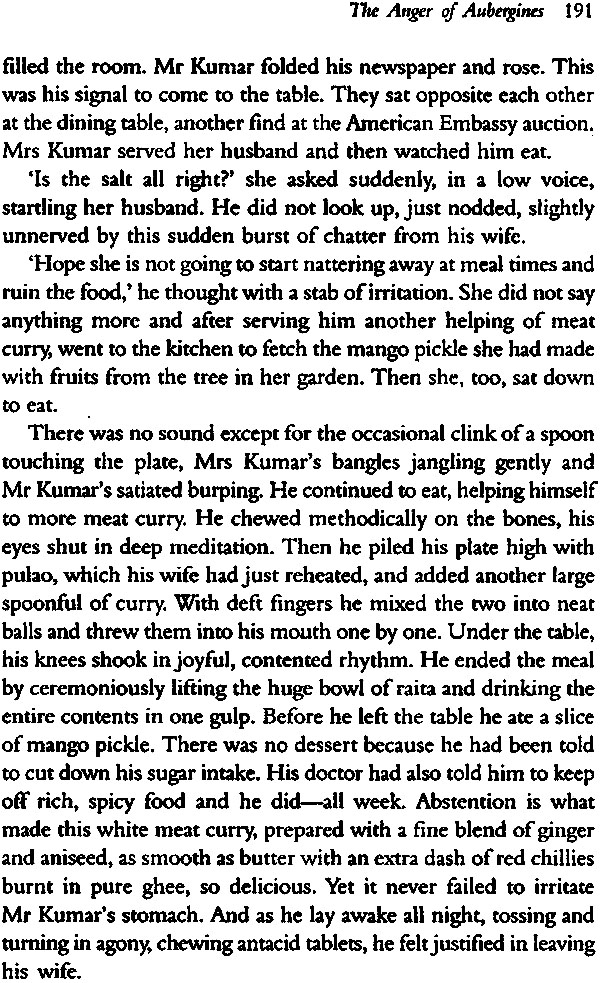 Click Here For More Books on the Tibetan Language