Life and Times of Malik Ambar(An Old and Rare book) 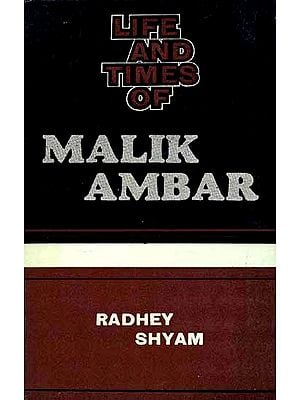 $29.00
Ships in 1-3 days
Notify me when this item is available
Save to Wishlist Send as E-card Share by Email
About the Book:

The present work is based on the Persian and non-Persian sources, deals with the life and activities of the Abyssinian chief, Malik Ambar, who in the country of his adoption, played the role of a general, administrator, stateman, politician and diplomat and above all, as savior of the independence of the Deccan. Though arrayed against the unsurmountable difficulties and heavy odds, he revived the drooping fortunes of the Nizam Shahi dynasty, saved the Adil Shahis and Qutb Shahis and protected the interests of the Portuguese, from the expansionist designs of Grand Mughals and their new allies. A balanced account of his struggle with the imperial power has been given and effort has been made to examine his relations with the Portuguese and the English visa vis his contribution to the Deccan.

MALIK Ambar was a link between the two creative epochs of Mahmud Gawan and Mir Jumla. Like them he played his part and heightened the prestige of the Deccan. Though pitted against heavy odds and insurmountable difficulties, with boundless enthusiasm and insurmountable difficulties, with boundless enthusiasm and unflinching zeal he fought those who threatened the independent existence of his kingdom. While doing so, neither did he ignore the imperative needs of the local population on whose support he depended for his success and nor the materialization of his future plans and ambitious schemes. Another man of lesser calibre would have not dared to embark upon schemes of such far-reaching consequences. He evolved out a new administrative pattern and gave a new life to his country. He won administrative of friends and foes alike. He created in the Maratha the urge to defend their country. By channelizing their energy into fruitful efforts he unconsciously sowed the seeds of Maratha unity. And certainly, it was because of his efforts that later the Maratha leaders like Shahji and Shivaji could successful continue their struggle against their enemies. They had inherited a tradition from him and they rigidly sustained it.

I express my gratitude to those who inspired me to write this small monograph. I also crave the indulgence of the readers for short comings.

NATURE invariable moulds the historical destiny of the groups of people living in the specified areas. The most glaring example of the truth of this statement is to be found in the thrilling achievement and the glorious failures of the inhabitants of the Deccan, the region enclosed by the Vindhya and Satpura ranges. Its compactness was compartmentalised into self-sufficient units by swift running streams and mutually intersecting hills capped by precipitous heights looking like perennial sentinels mounting guard against aggression and affording shelter for peaceful pursuits. This barren and sterile region produced men of boundless energy and obstinate stamina, who knew how to live dedicated and simple life. Their wants were few, but their ambitions were high. Like the Rajputs and Pathans they were very sensitive to the feelings of self-respect and wedded to the idea of patiently for avenging their wounded their designs and swift and agile in executing them. They could play the role of mercenaries and patriots with equal fervor.

The Deccan was the water-shed between the imperialistic north and feudalistic south. Naturally it pulsated with the traditions and ideals of both. It developed a culture which was intensely circumscribed in its pattern but universal in its contents. It generated balance in proper proportion and adjustments within proper limits. It was averse to tolerating dominance in any form. The feudal lords laid the foundation of the dynasties and kingdoms. The struggle between the strong and the weak went on incessantly and so did the process of construction and destruction. The patterns changed but the underlying currents continued to flow unabated. The people of this region had always to depend upon their own oars. There was always continuity in the idea of preserving the peculiar Deccani culture and the political independence of the country by repelling the invasions from the north and resisting the penetration of "New Culture." The people of the Deccan always maintained proper balance between the political powers of the north and south, by checking the advancement of the two in opposite direction with a view to attain imperial status. If any of the two succeeded in its effort the other did not take rest until it had brought down the imperial fabric. Balance in proper proportions, adjustment within certain limits could be tolerated by the Deccanis but not the dominance of any power. This was the tradition which they inherited from their ancestors.

The last quarter of the fourteen century saw the emergence and the growth of the Bahmani Kingdom, which produced remarkable rulers like 'Alauddin Bahman Shah Mahmud Shah Firuz Shah Bahmani and far-sighted administrator like Mahmud Gawan and others. True that the internal history of kingdom was merely a record of factional fight, civil wars, extravagance and debauchery on the part of some rulers, yet the people, of the north and the south to make the Deccan the graveyard of its ideals. The remarkable cultural contributions of the rulers and the nobles and their evils or weaknesses. They were not asceties or supershadow their evils or weaknesses. They were not ascetics or superhuman bening, who could live far away from the purple wine and beautiful women. With their dazzling sword and sharp-edged spears, they shattered the dreams of the rulers of Malwa, Gujarat and Khandesh for southward expansion, and of the rulers of Orissa and Vijayanagar for the northward advancement. Surrounded by ambitious political potentates on the borders of their kingdoms and by the ambitious self-seeking foreign and native nobles, the later Bahmani sovereigns found it difficult either to maintain the balance between the rival groups at home or to check the process of decline and degeneration. The party conflict became bitter on account of the open condemnation of the Deccanis by the foreigners. This is due course ruined the prestige of the Kingdom and also led the neighboring states to cast their greedy eyes upon its territorial possessions. The fratricidal wars which the Bahmani Sultans fought against the neighboring powers to save their territories exhausted their resources. They found it difficult to save their collapsing house. Such a situation gave a fine opportunity to Malik-Ahmad Nizam-al- Mulk, son of Malik Hasan Bahri, a person born and brought up in the Deccan and in whose veins ran the indigenous blood, to raise the standard of revolt, snap political connections from the weaks, helpless Bahmani Sutan and to lay the foundations of an independent Kingdom. The example of Malik Ahmad was followed by the other Deccani and foreign nobles who too withdrew their allegiance and declared their independence. Thus, by the end of fifteen century, five independent Indo-Turkish kingdoms came into existence. This occurred when stirring event were taking place in the north because of the declining fortunes of the Tughlaq dynasty, Timur's invasion and the rise of independent kindoms there.

The succession states, inherited all the vitues and the vices of the parent Bahmani kingdom. The kindom of Ahmadnagar, which extended from the Narbada to Bhima soon involved itself in the conflict with the rulers of Bijapur, Bidar, Berar and Golkunda on the hand, Khandesh and Gujrat on the other. Thus opened a new chapter of offensive and defensive wars in the history of the Deccan. The ambitoion to establish supremacy over the entire Deccan led to the organistion of coalitions amongst the rulers, the weaker joining the stronger, which in due course deepened the conflict. After the kingdom of vijayanagar had been forced to quit the political stage, the kingdom of Berar and Bidar too became the victims of aggressive designs of the rulers of Ahmadnagar and Bijapur. Fortunately, in the North, in the period from 1490 A.D. and 1564 A.D. there was no powerful state, leaving aside the independent kingdoms of Malwa and Gujarat and Khandesh, which could embark upon the project of Southward expansion. This, no doubt, gave some relief to the people of the Deccan but the internecine wars hardly gave them the opportunity to make bold experiments in the field of administration, architecture literature and music. However credit must be given to these rulers for keeping some control over the political ambitions of the Portuguese, who had established themselves on the western coast. The Nizam Shahis and the Adil Shahis pursued the policy of conciliation and coercion, while dealing with them. Besides, one can hardly find anything worth appreciating in the political record of the Deccani states, except that they fought amongst themselves to defend their local interest and culture. Still then there is something very remarkable in this struggle i.e. that the rulers, nobles and people had firm faith in cultural integration.

CONTEST WITH THE MUGHALS

RELATIONS WITH THE PORTUGUESE AND ENGLISH

HIS CHARACTER AND ACHIEVEMENTS 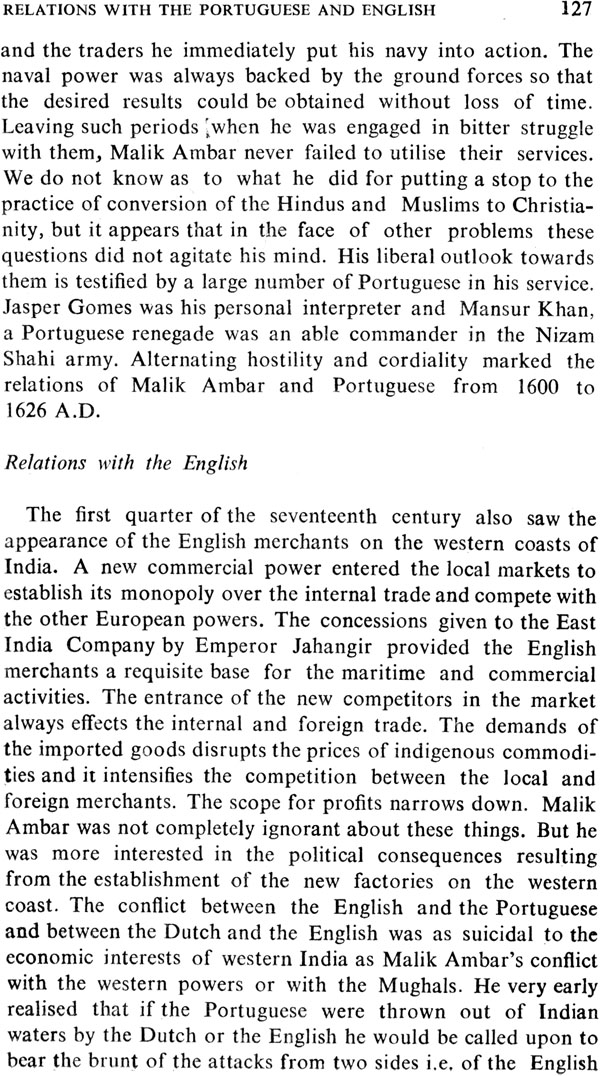