Chandrashekhar Sharma is an engineer by training having done his Diploma in mechanical engineering in 1965. He is also an Associate of the Federation of Insurance Institutes (India) and an Associate of Institute of Insurance Surveyors and Adjusters. A sympathizer of cause for farmers for his region of Vidarbha, he has run a dairy and is a lover of dogs and animals in general, having bred and exhibited his dogs of many breeds. He was a member on the animal husbandry committee (Central India) for devising an action plan for preservation of national biodiversity set up by government of India. He is currently on the Board of Governors of the Indian Institute of Forest Management since 2015.

Chandrashekhar has been learning Jyotish for over 50 years. He started learning when he was 8 years old, initially from his father. His grandmother was also an astrologer, who learnt the science from her own ancestors. A firm believer of astrology being Vedanga (limb of Vedas) and thus to be used for helping those in distress, he follows the family tradition of not charging for astrological readings. He has delivered lectures on Vedic astrology at many astrological conferences in India and abroad. He lives in Nagpur located at the center of India with his wife, Sulakshana, Son, Daughter-in-law, two grandsons and two dogs and operates a small distribution company.

"Laghu Parashari", a great ancient text which explains how Vimshottari Dashas should be applied, also known as Ududoyo Prudeep, along with "Madhya Parashari" aka "Ududaya Dasha" and published together, has been translated in many languages. However there was dearth of a detailed commentary that explained the principles of Vedic Astrology, behind the results indicated in the text, nor was there any commentary that indicated how the lower level Doshds at all levels, in Vimshottari dasha system could be used to divine what is likely to happen in future. The fact of these texts being only focused parts of the Brihat Porushoro Horn Shostro and the year to be used for delineation of Vimshottari doshds was also less known due to brevity of the available commentaries. Saptarishis Publications therefore requested Chandrashekhar Sharma to write a detailed commentary on the text, in English, for the benefit of astrologers at large. Chandrashekhar has already authored Vedic Astrology demystified which is in its 3rd edition (in English) and Hindi translation of the same text is also under print for benefit of Hindi speaking readers, under instruction of H.H. Punyanand Giri Acharya Mahamandaleshwar of Niranjani Akhada.

I was requested by Mr. Sunilji of "Sapatarishis's astrology" publication division, to write an english commentary on Laghu Parashari also known as "Ududaya Pradeepa" and Madhya Parashari. I was a bit reluctant to do so, initially, as there are many commentaries and translations on these texts in Sanskrit, Hindi, other regional languages, and English. However after discussions with the publisher, himself a renowned astrologer, I could see that there is much confusion about the well laid out principles enunciated in these texts while applying them to real life charts and some illustrations could help readers understand how the principles learnt, after a thorough reading and understanding of these classics might be of help to astrologers at large.

I must tell, here, that I started reading astrological classics when I was around 8 years of age, and would get a bit disappointed that many a times the results of real life charts would turn out different than what I thought they should be, especially in matter of timing of events. Once I asked my father where I was going wrong, as I was applying the dasha principles right. Being young, and therefore boastful, I also told him that I have read most of the astrological treatises and still timing is something I was not getting right, in a reasonable time frame. My father smiled and asked me to read smaller books. Looking at the confusion on my face he told me to bring Laghu Parashari and Bhavartha Ratnakar, both slim books, from his library and told that if you can fully understand even one of these you should do fairly well in predictions and timing of events. It might interest the readers to know that the name of the author of both Laghu Parashari and Madhya Parashari is not known. This also indicates the humility of the unknown author, which is also one of the indicators of his knowledge as it is rightly, said "(vidya vinayen sobhate)" (Knowledge is embellished by modesty).

I have attempted to elaborate on the principles given in the shlokas of the texts, to the best of my abilities, and trust that the astrologer community will benefit from it. I would like to request the learned astrologers to bring, any wrong interpretation of shlokas on my part or where more clarity about application of the principles is desired so that I can do the need- ful in coming editions. I would be failing in my du- ties, if I do not acknowledge my indebtedness to Shri N. Balasubramanian, an eminent astrologer who has helped by carrying out the proof reading with able assistance from Mr. Vidhan Pandya a business consultant from U.S.A who himself is and astrologer of no mean achievements, so that no inaccuracies creep in due to my shortcomings. I must also express my heart- felt thanks to Mr. Arun Singh also currently in U.S.A., who really went through the entire finished manuscript with a fine tooth comb to remove even the smallest discrepancies.

Text that we are going to study, here, is variously known as "Ududaya Pradeepa", "Jataka Chandrika", and "Laghu Parashari", However as one will find while reading the text, the unknown author, him- self, has called "Ududaya Pradeepa", not "Laghu Parashari". The name "Laghu Parashari", by which it is popularly known, is only indicative of it being based on some of the shlokas that appear in "Parashariya" which in modern times goes by the name of "Brihat Parashara Hora Shastra". There is, also, much misunderstanding about "Laghu Parashari" and "Madhya Parashari", which many learned think are something different from "Parashariya", more popularly known as "Brihat Parashara Horashastra". Let me assure the learned astrologers, that barring the first one or two shlokas that are in the form of prayer to deities, explain the source of the shlokas (aphorisms) and its title, there are hardly any shlokas elucidating principles of inter- pretention of dashas and yogas that is not present in Parashari (BPHS). The inquiring astrologers might like to confirm this for themselves. It is also necessary to understand that in times gone by, the texts had to be memorized and therefore brevity is the soul of most of the astrological classics. Therefore it is advisable to understand the underlying principles from the shlokas instead of blindly applying the results verbatim.

One must understand that it is in the interpretation of dashas, that the concept of functional as against natural benefic-malefic has a great say in the manner that the results shall ensue during dasha of the bhava lords. There is generally a confusion in mind of beginners, and sometimes even the advanced practitioners of Vedic astrology, that some planet shall only give good results for the bhava in which it is placed and those it aspects, by reason of its being a functional benefic even if it is a natural malefic and vise a versa. One must re- member here that the functional nature of the planet is primarily manifest only in their dashas and for results in natal chart their natural or inherent nature has a say, including the exceptions applicable for Jupiter and Sat- urn as to their placements and aspects.

"Laghu Parashari", literally, means a minute or small, part of the original text "Parashariya", or "Parashari", which is now-a-days commonly known as "Brihat Parashara Horashastra". There have been many commentaries and translations of the shlokas (aphorisms) taken from" Parashari", that constitute the body of Laghu Parashari, in Sanskrit, Hindi, English and in other regional Indian languages as well. I am attempting to give my interpretation of the principles that the sage tried to convey through this focused narrow area of results of Vimshottari dasha and trust that the learned and students, both, appreciate my efforts. I have used the names of bhavas in both English and Sanskrit to acquaint readers with these terms as some times the Sanskrit names have some special meaning attached to them. 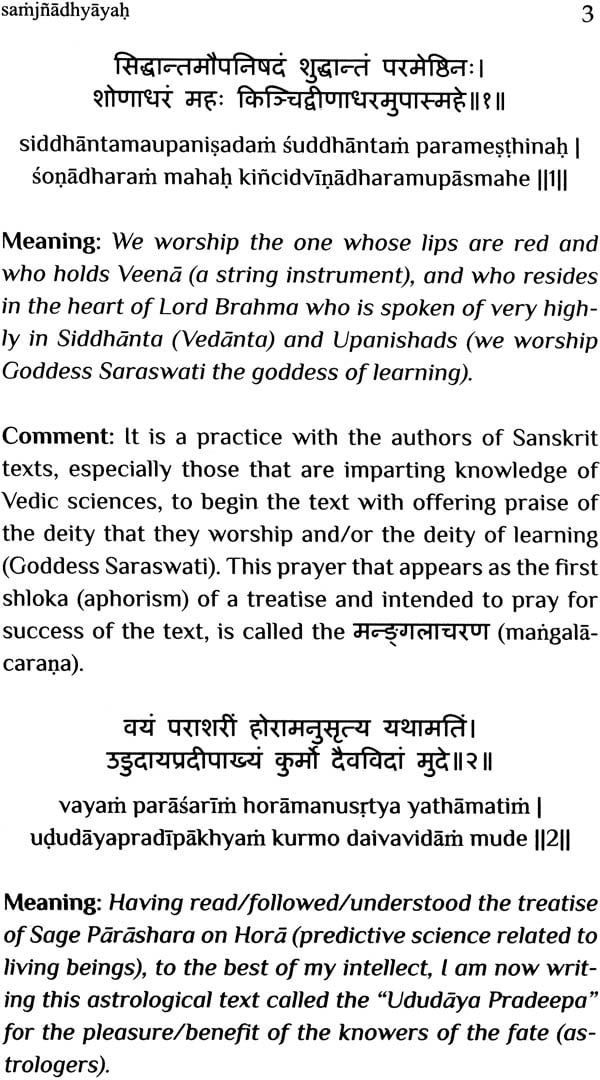 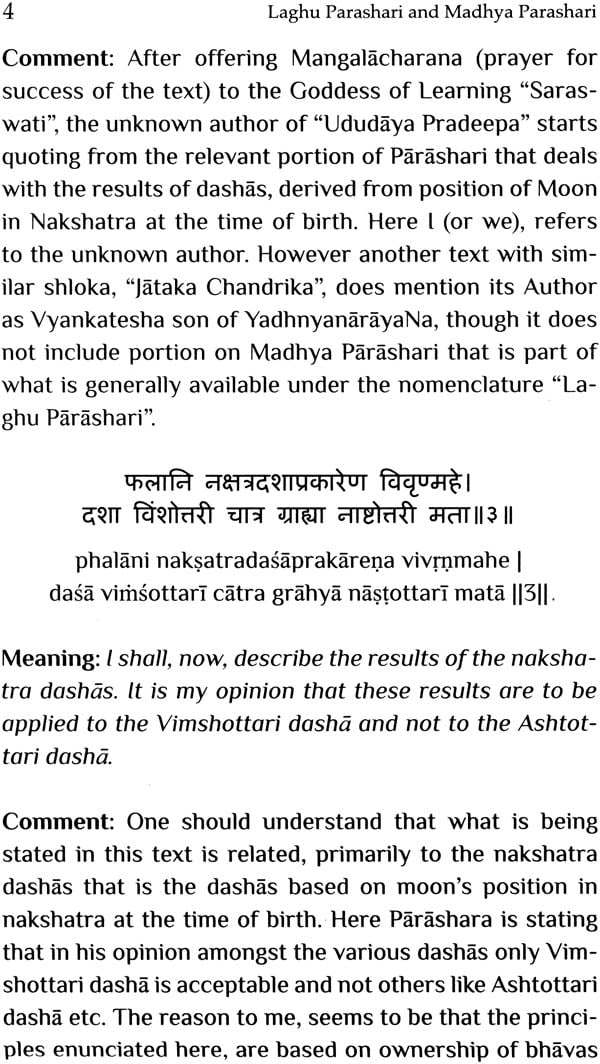 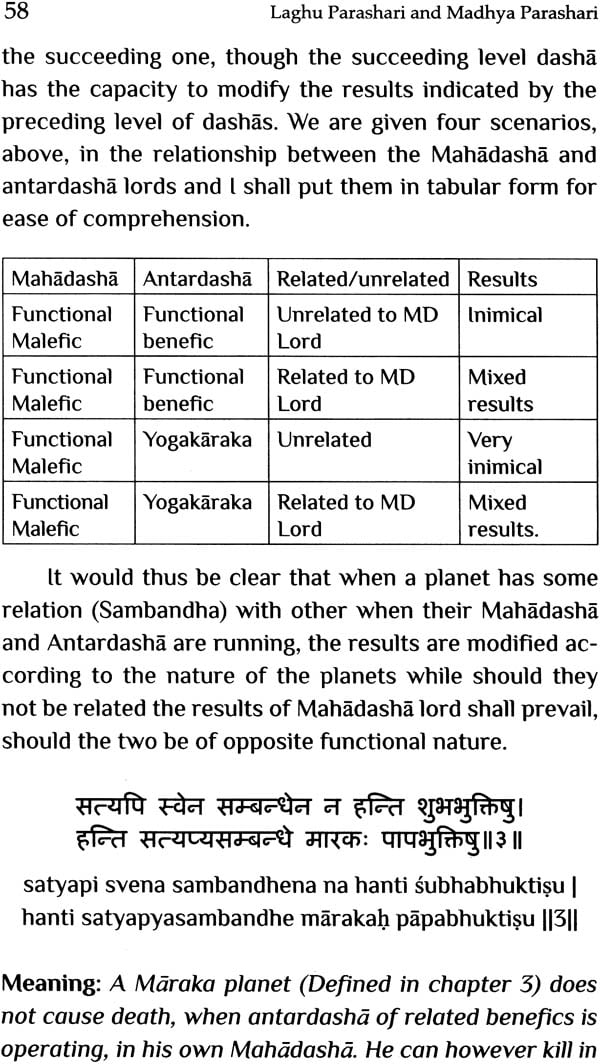 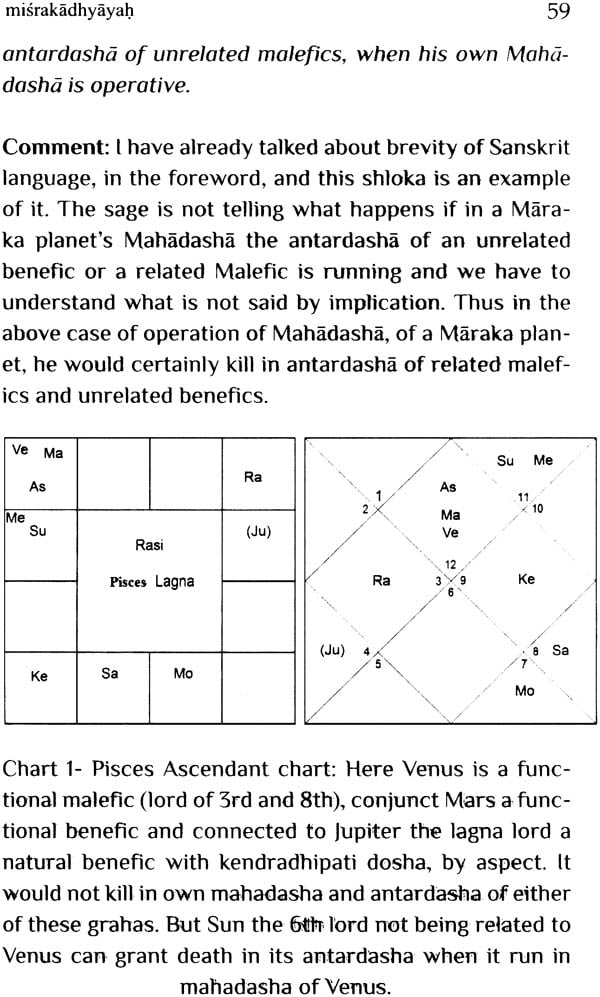 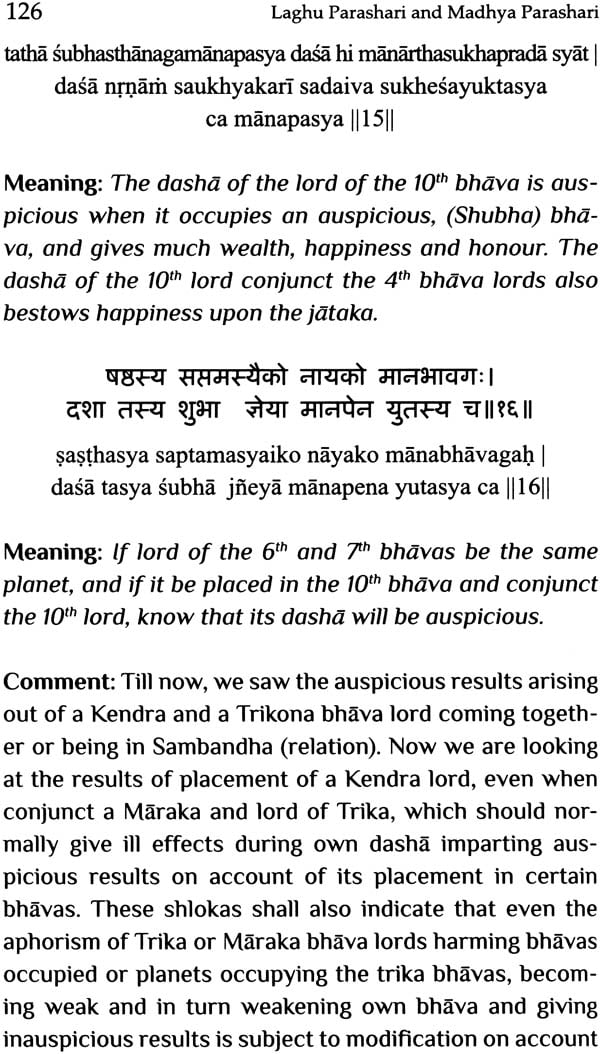 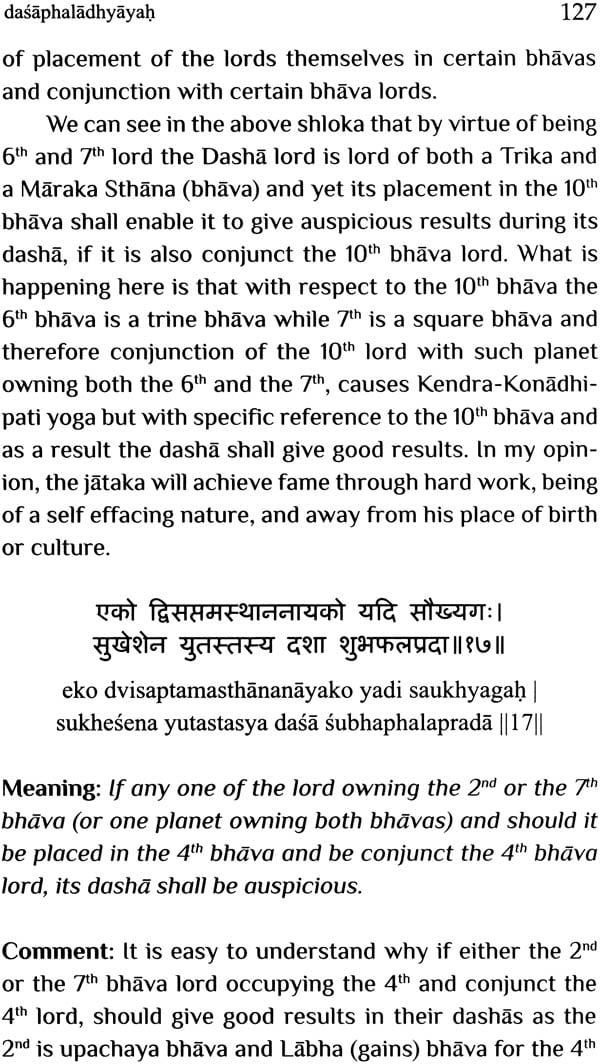 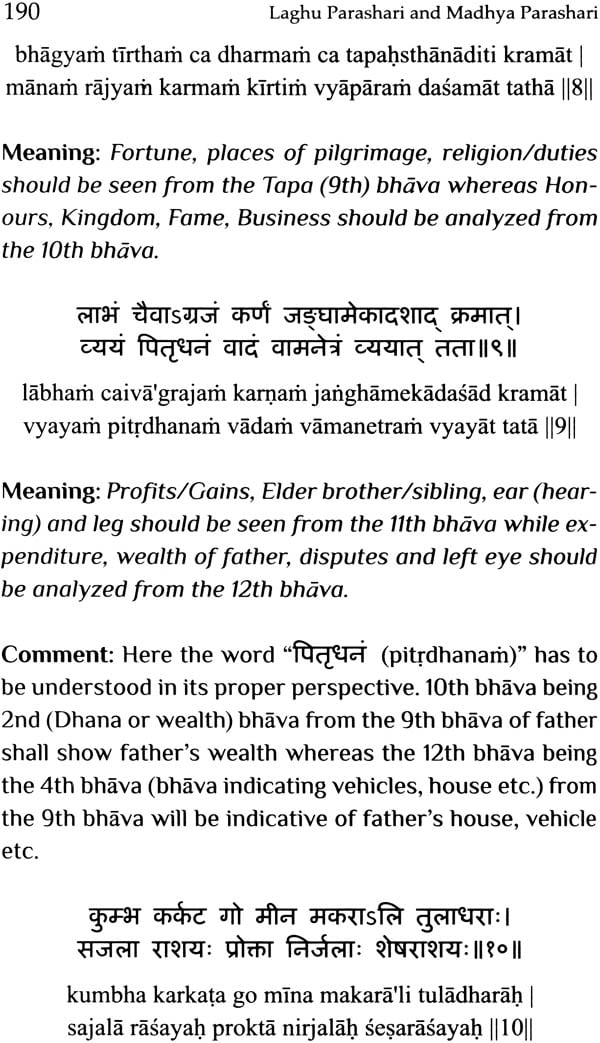 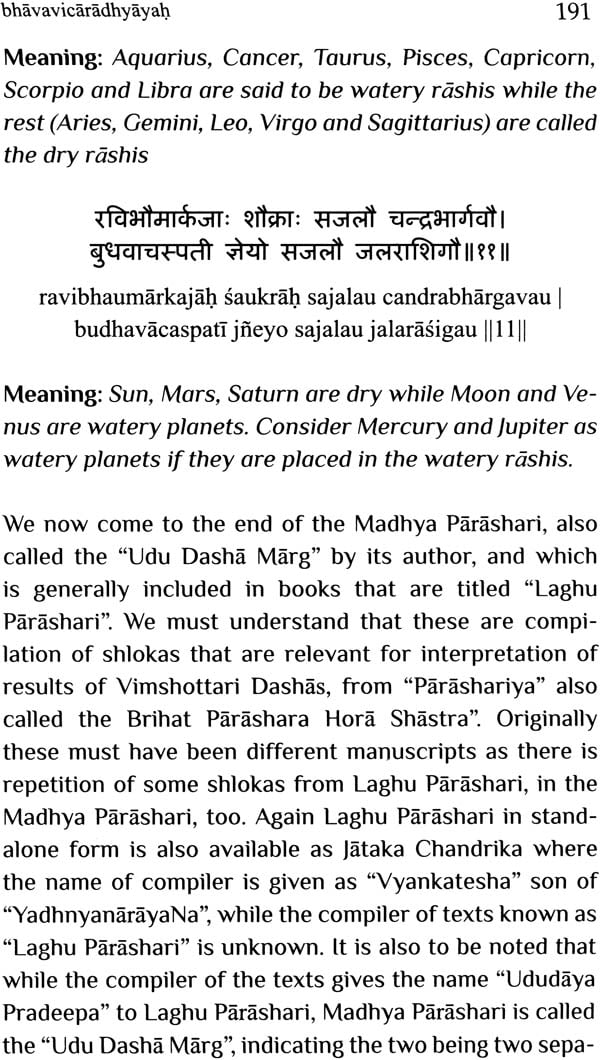 Hindu Predictive Astrology
By B.V.Raman
$21
Out of Stock