Laghu Parashari, also known as Jataka Chandrika, is an important treatise on the Vimshottari Dasha system and is based on Brihat Parasara Hora Shastra. The Vimshotri Dasha system is a well accredited Paddhati of Hindu Predictive Astrology. Sage Parasara expounded a large number of Dashas for the purpose of delineating the course of life of the native, but he strongly advocated that Vimshotri Dasha is the befitting Dasha in Kaliyuga. This remarkable treatise is compiled in just forty two verses and yet it contains all the fundamental principles on which the Parashari system is based and is widely relied upon by the exponents of Vedic astrology. In fact, the author designated this concise composition as Udu-Daya Pradeepa wherein Udu connotes Nakshatra, Daya stands for Dasha and Pradeepa is the illumination. In other words, this Laghu Parasari is the enlightenment of Ududashas or Vimshotri Dasha System of Sage Parashara. It also characterizes diverse positioning of planets in twelve houses with respect to each Lagna where it tackles the entire gamut of Karakas, Marakas and Dashaphalas in various possible ways.

The forty two principles enshrined in Laghu Parasari forms the first part of Jataka Chandrika which in all has 80 Shlokas and the second part carries the remaining Shlokas assigned to assess the varied characteristics of planets the way they assume in twelve Lagnas by adopting principles initiated in Laghu Parasari of the text. Based on these acquired status of the planets, the predictions are made. The Laghu Parasari is predominantly referred to in the northern and the Jatika Chandrika is widely read in the southern areas of India by the devoted savants of astrology.

The author has done Jyotish Visharad from ICAS, New Delhi. He served as an Executive Director (Retired) in one of the largest public sector undertakings of the country and thereafter, worked as an advisor in the private sector. In the past over two decades, he is ardently studying and sharing the experiences with the curious contenders who have reposed great confidence in this divine science. In this process, he authored two well acclaimed books, 'Vedic Astrology in Money Matters' and 'Maansagari'.

Laghu Parasari is a wonderful scientific Grantha on the Dasha Paddhati which is widely practiced in the field of the predictive astrology, predominantly in the northern part of India. Basically, this is a concise text wherein the prediction of the entire Karakas, Marakas etc., is condensed into just 42 well composed and profound Shlokas. These Shlokas are interpreted from all its promising points of view, by many eminent and highly acclaimed scholars in this field, yet it needs to be revisited by the contemporary commentators to validate the underlying features in context with the present time. This with no stretch of imagination be construed that such comments are incongruous or unnecessary, but on the other hand, Laghu Parasari being such a widely acclaimed Grantha with cogent composition, needs to be made accessible by the readers at large, in a simple and comprehensible format and this book is a humble attempt towards such end.

The knowledgeable astrologers contend that the Vimshotri Paddhati discerns the calculable planetary Dashas' results. Besides, this Dasha system is having intrinsic relationship with Laghu Parasari Sidhdhanta which is primarily connoted as "Ududaya Pradeepa" that means Nakshatra based Dasha system. In the Dasha Adhyaya (Chapter-48) of Brihat Parasara Hora Shastra, the Sage Parasara narrated various kinds of Dashas of the planets and in Shloka-3, he said that amongst these, Vimshottari Dasha is the main and the predominant one. In the same Shloka he averred that under certain special circumstances, Ashtottari, Shodsotattri etc., Dashas are considered. But the Maharishi was empathetic in Shloka in Kaliyuga the natural life span of the human being is 120 years and Vimshottari Dasha would be the most appropriate configuration through which one can predict with great amount of accuracy.

This text is a methodical Grantha encompassing most significant aspects of astrology. The peculiarity is that in this transcript, until a Yoga Phala is not said to produce evil effects, it should not be treated as unfortunate, ill-fated or adverse to give evil effects. Until such time it says that a particular planet or Yoga will not produce 'benefic results', it should be considered that such planet or Yoga will give neither good nor bad result meaning thereby the neutral effects.

In the Yoga Phala module, at some places, the planets are not suffixed with word 'Karaka'. It means that the said planet has the characteristic of Karaka but according to the author, it is not capable of giving auspicious results in the format of Dasha system. In the content, the mutual relationship (Sambandha) of Kendra and Trikona are called 'Karaka' and the effect of those Karaka planets is considered auspicious.

In the native astrology, the Sun, Mars, Saturn, Rahu and Ketu are assumed as evil and while ill associated Mercury, weak Moon is also considered as evil. Jupiter, Venus, un-inflicted Mercury and the strong Moon are termed as good planets. But, in this text, neither any planet is good or evil. All the planets are defined and become as good or evil in accordance with their lordship and positioning in the horoscope.

For example: In the native astrology, Mars is a natural malefic planet, but according to this text, in the Cancer birth chart, Mars attaining the position of the 5th (Trikona) and the 10th (Kendra) lords becomes highly auspicious. However, the same Mars, in the Virgo birth chart by assuming the lordship of the 3rd and the 6th houses turns into deadly evil. Similarly, the exalted Jupiter (placed in Cancer sign) is auspicious, but same Jupiter, in Libra Lagna by becoming the lord the lord of the 3rd house and the 6th house is reckoned as malevolent. Further, in the Gemini lagna chart, Jupiter is poised as a Maraka. The author in this Grantha brought in two categories of the Maraka planets, one that does not kill, but creates dire situations and give painful results and the second that kills in its Dasha/Antardasha.

Over here, the Dasha Phalas are attributed to the changed situations in the life of the native. The Dashas portrays the good and the bad time. Therefore, after ascertaining the strength of the radical planets of a horoscope and the Dasha periods of the benefic and malefic quality attained by the planets according to the principles initiated in this text, the results are to be declared.

Here, standalone planets, and the combination (Yoga) of planets are only termed as auspicious, inauspicious, evil or Marakas. In reality, the malefic and benefic planets cause effect over some important aspect in the native's life. The associations or relationships between two planets normally are the Sambandhas amongst houses and therefore, due to many intricate situations, the results of the Dashas of the planets involved in the Yogas become rather difficult to assess. It is for these reasons; the author opined that during the Dashas of the Karakas planets, they usher in the auspicious time and in case of the Dashas of the malefic planets, the native will experience bad time. The Dashas of the Maraka planets will bring distress, from misfortune to death.

Laghu Parashari, also known as Jataka Chandrika, is an important treatise on the Vimshottari Dasha system and is based on Brihat Parasara Hora Shastra. Written in Sanskrit and in the usual Shloka format, it consists of eighty Shlokas and out of which forty-two verses are devoted to Laghu Parasari. The balance Shlokas of Jataka Chandrika are assigned to assess the diverse characteristic of planets the way they assume and become auspicious, inauspicious or neutral under twelve Lagnas by adopting principles initiated in Laghu Parasari part of the text. Based on these acquired status of the planets, the productive and unproductive Yogas are analysed.

Thus, it is a brief but an important treatise on the predictive part of Hindu Astrology written by an ardent follower of Sage Parasara. It contains all the fundamental principles on which the Parashari system is based. It is widely relied upon by the exponents of Hindu astrology and a text that is frequently cited. Maharishi Parasara is the all time legend of Vedic Astrology and without whom it's not even possible to think about Vedic Astrology. His principles are simply outstanding and the Vimshottari Dasha system is found to be the reliable and accurate Dasha system. Although all hundred chapters of BPHS give highly valuable information for predictive Astrology but, even if, one could thoroughly understand and apply just 42 Shlokas of Laghu Parasari; one can predict with great accuracy. So, for the benefit of the students keen in learning Vedic astrology, Laghu Parashari is taken as the first classical book to be presented here on, I shall try to restrict myself as close possible to the classical rules as guided by the great Maharishi.

It remained my ardent endeavour to accord most meaningful treatment to these coherent verses, which by no means exhaustive, but an attempt has been made to tackle certain contemporary issues those matters all time in the light of astrology. Wherever possible, some plausible reasons to the inherent essence of the Yogas and axioms are portrayed for the benefit of the serious readers. In order to validate the concept of certain intricate Shlokas, an attempt has been made to quote birth charts or cite illustrations, where ever possible. It is also ensured that these horoscopes belong to some celebrities or renowned public figures, making it easier to correlate the events or incidences.

Here is a word of caution that while going through the text, it is essential to have a thorough understanding of the principles expounded over here and skipping any part or aspect may not convey the real meaning or underlying important attributes of a particular Shloka or chapter.

I am highly grateful to Mr. Saurabh sagar or Sagar Publications his unflinching support in many ways, enabling me to present book in this cogent form before 'the august readers.

I have made sincere efforts to bring on the translation of the Shlokas of the text as close to the intended concept as possible I at the same time, the elucidation with supportive material is brought about in a lucid and logical form for easy Comprehension. I trust that the esteemed readers will find the tents quite absorbing and enlightening. However; if they find inadequacy at some places for which I crave forgiveness for which inadvertent lapses on my part. 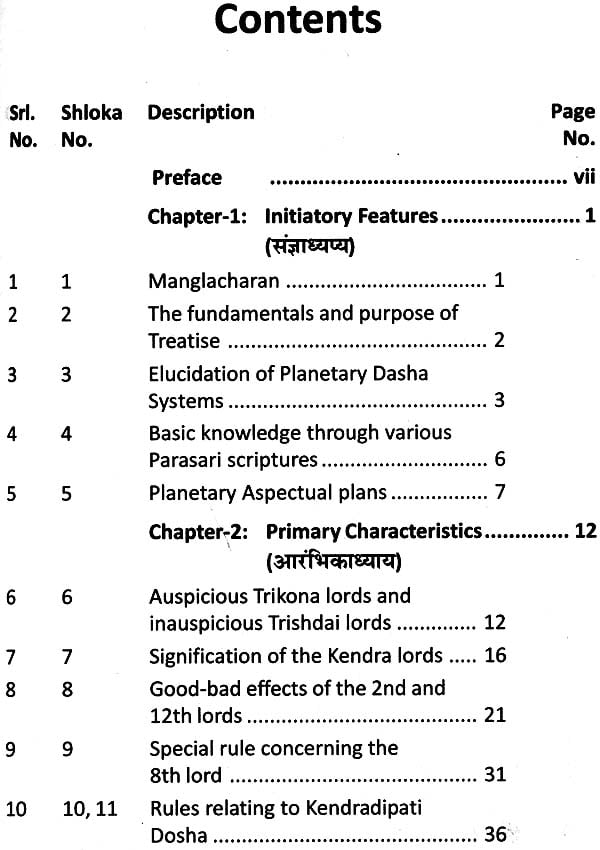 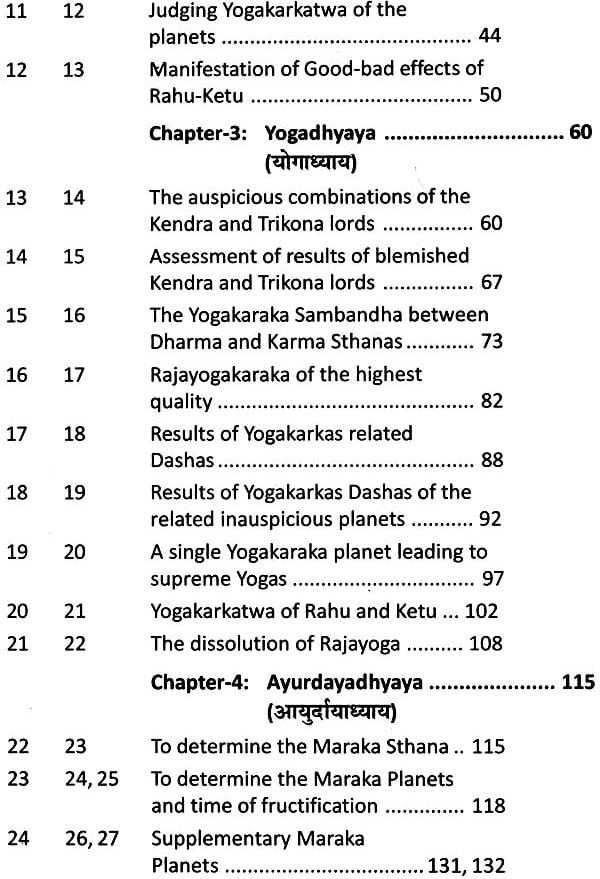 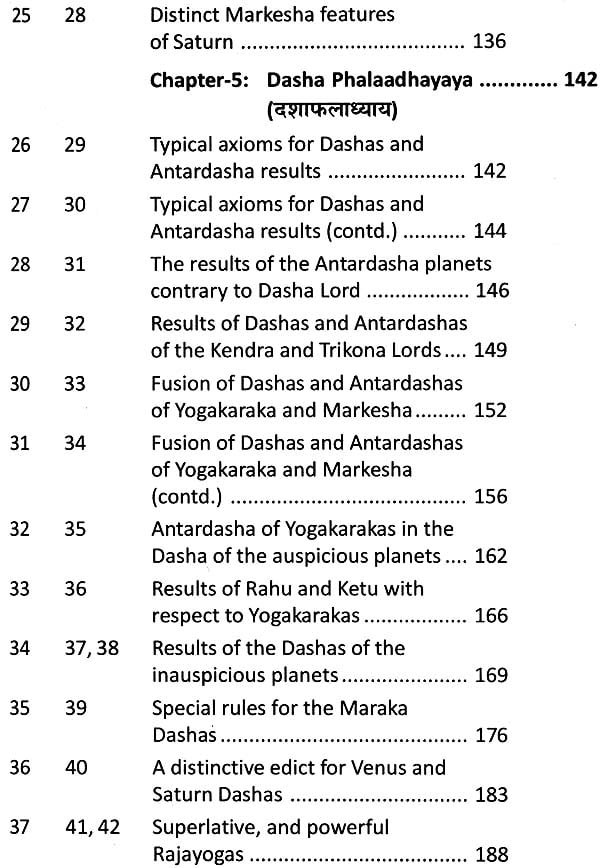 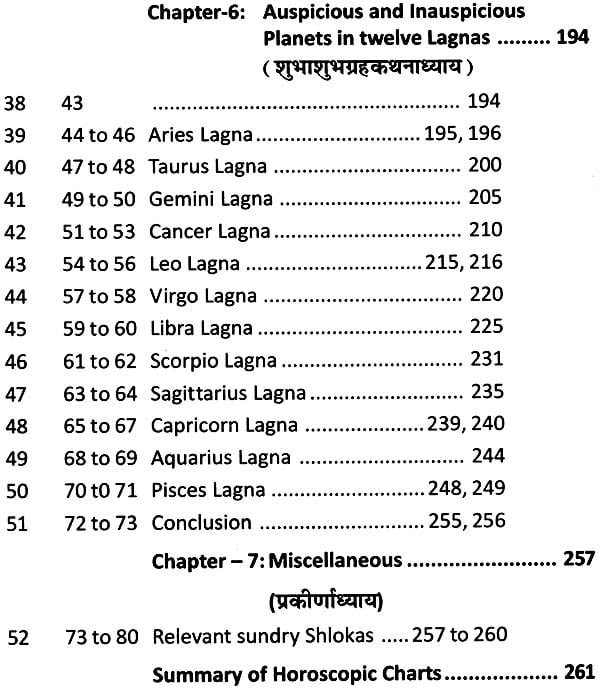 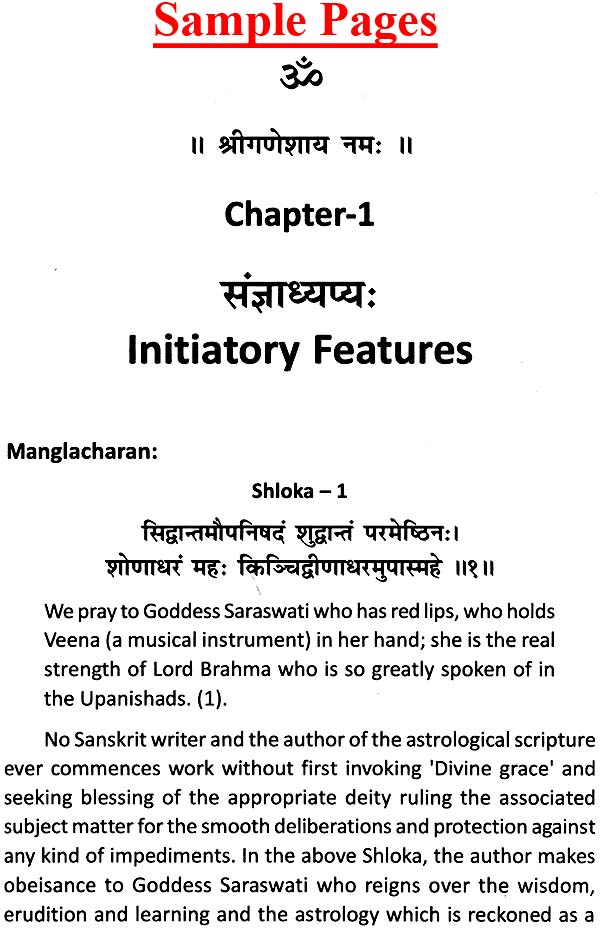 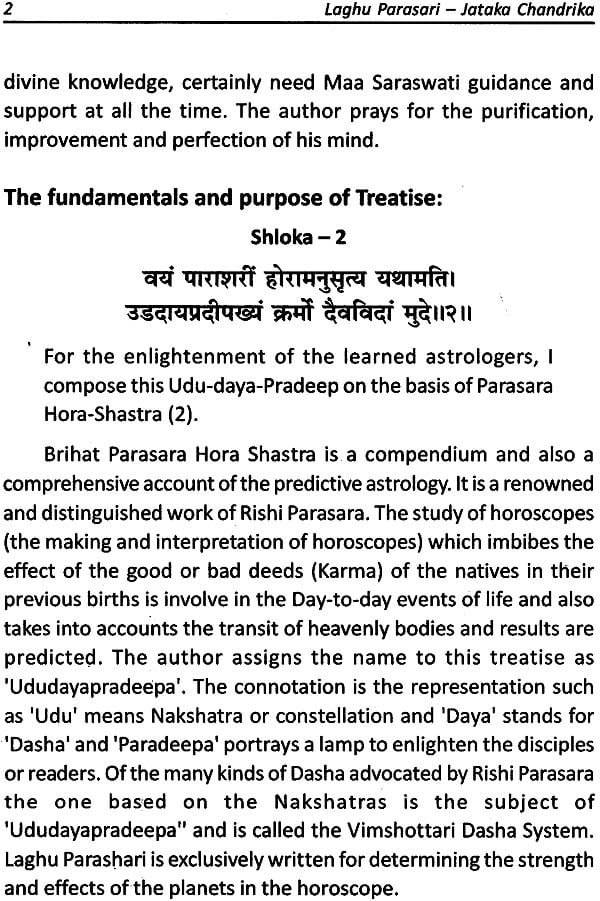 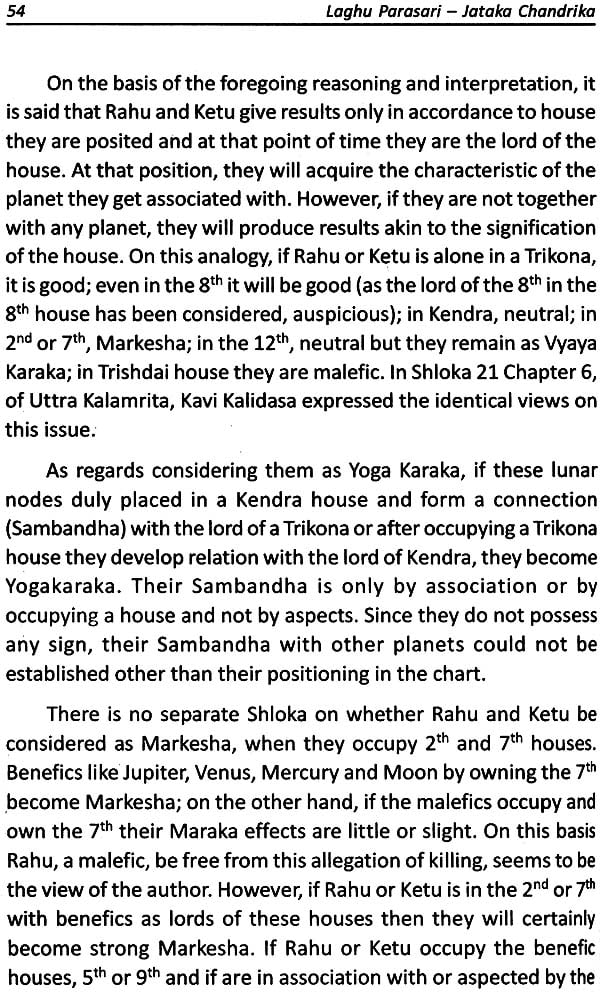 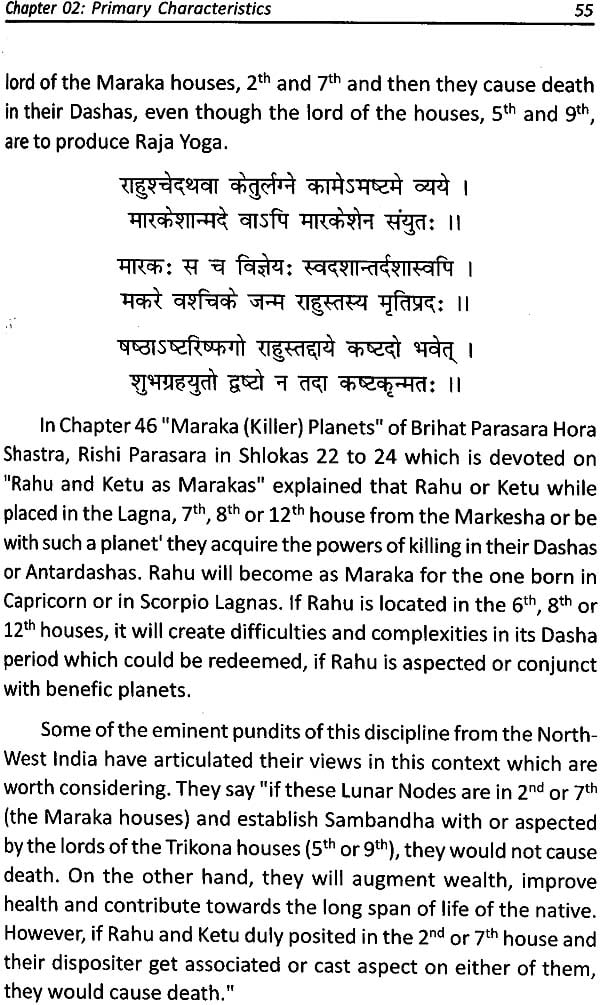 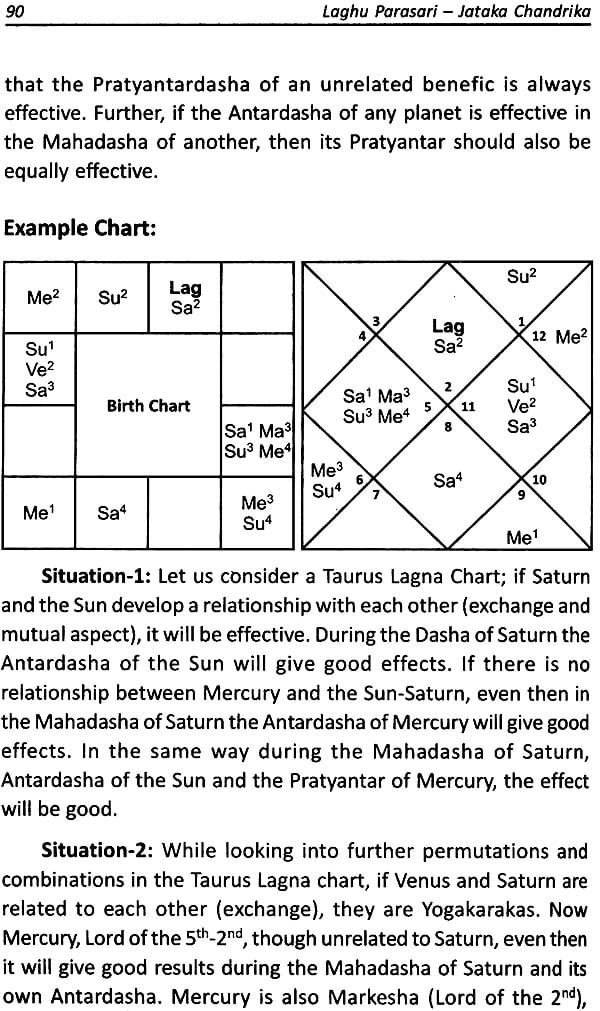 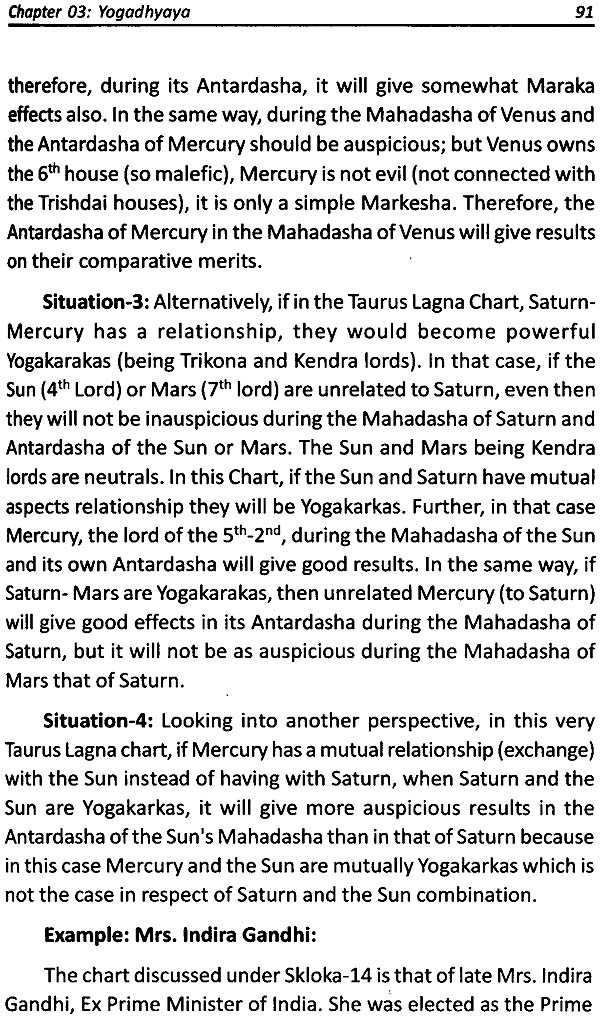 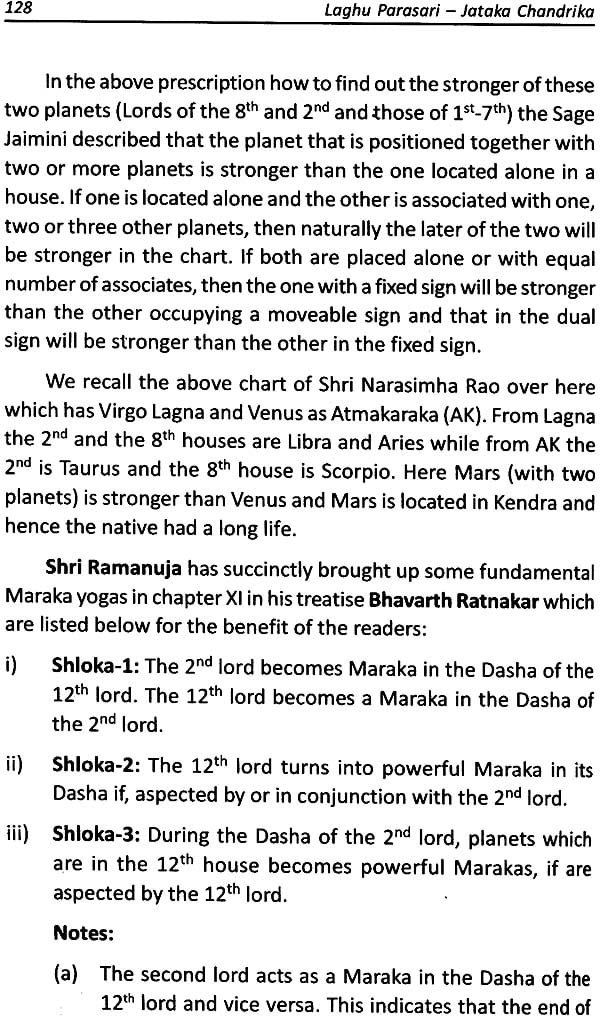 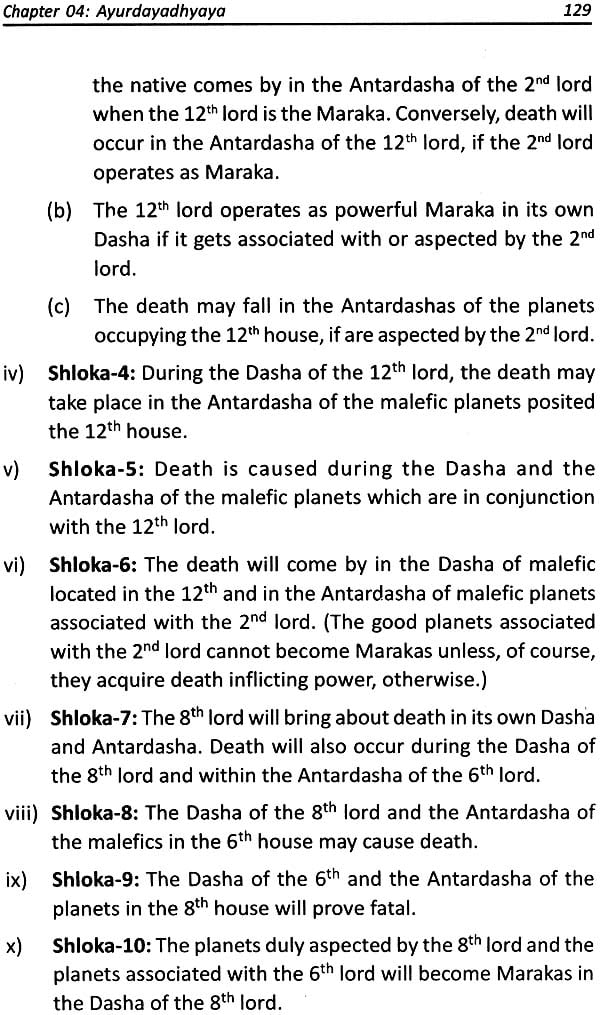 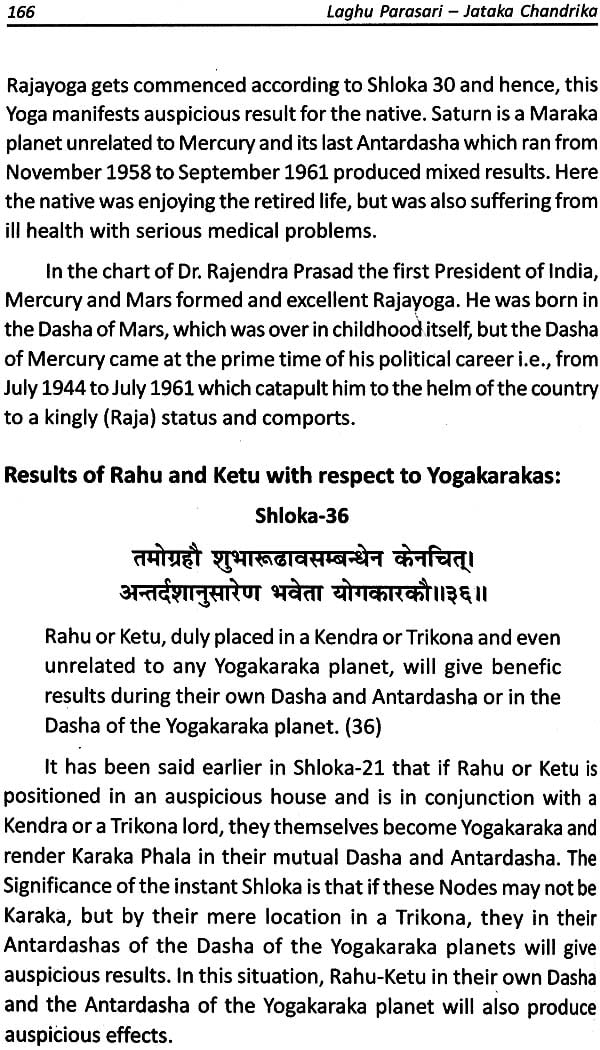 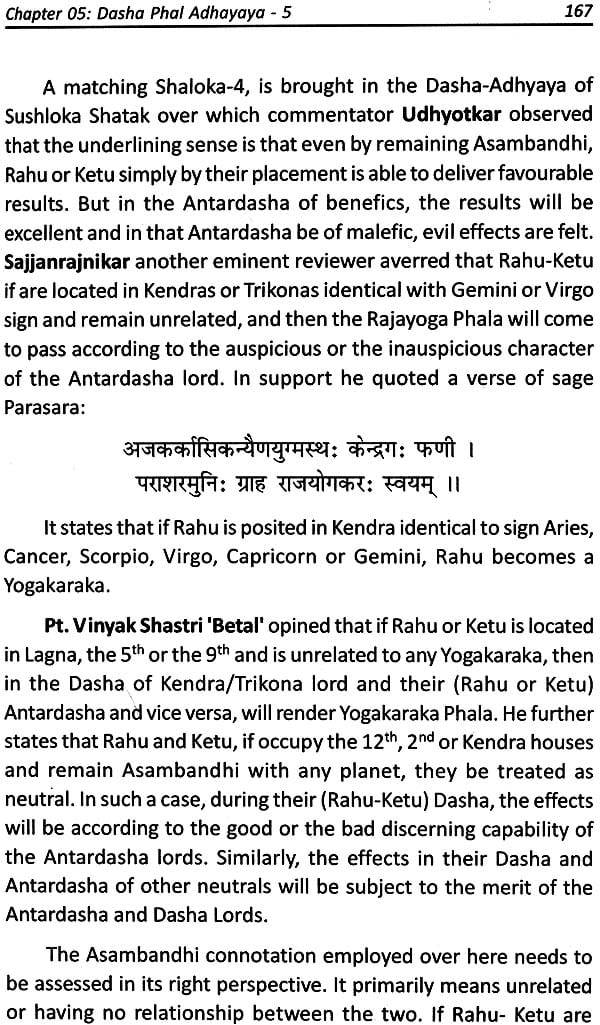 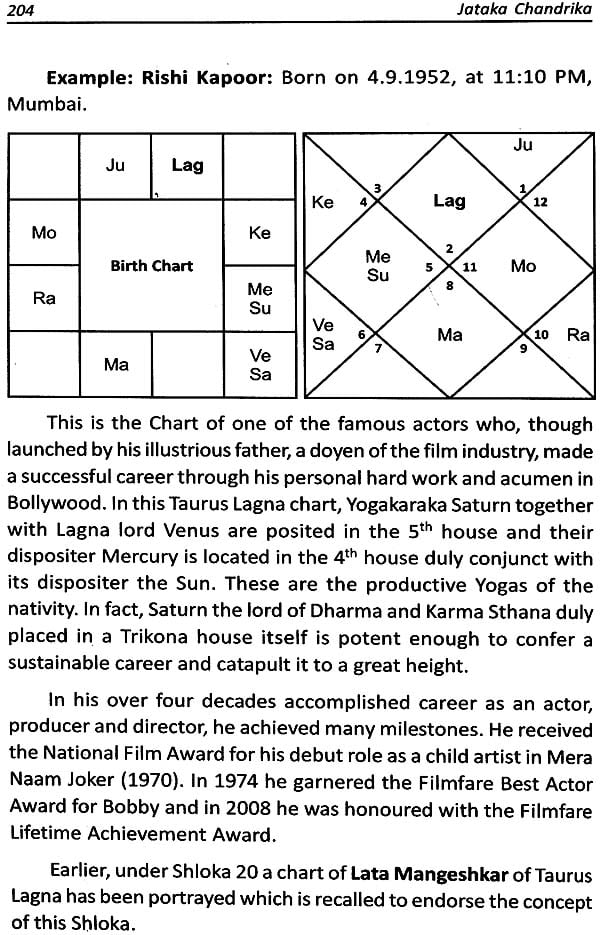 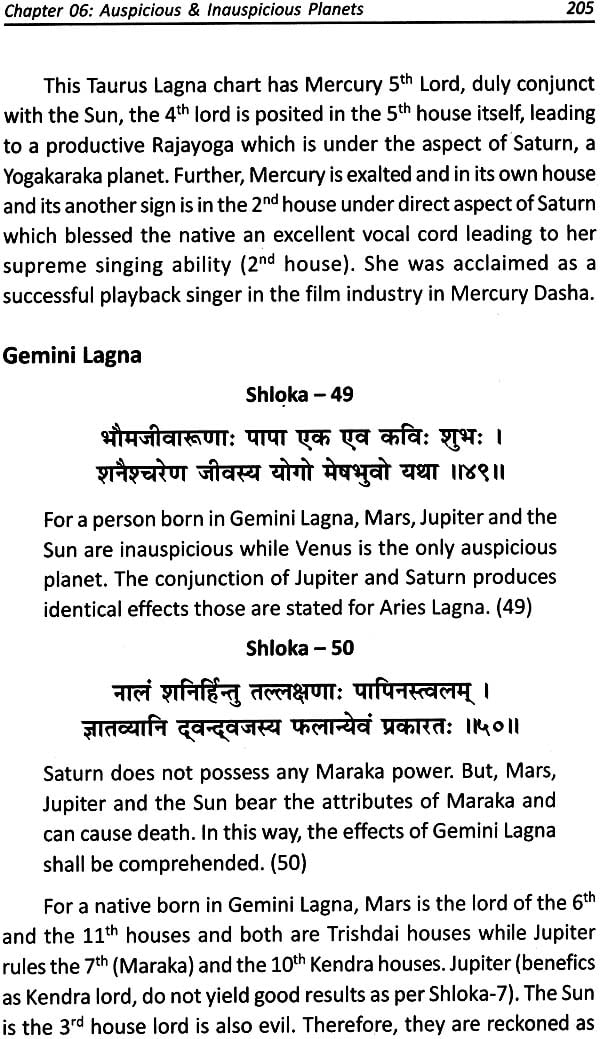 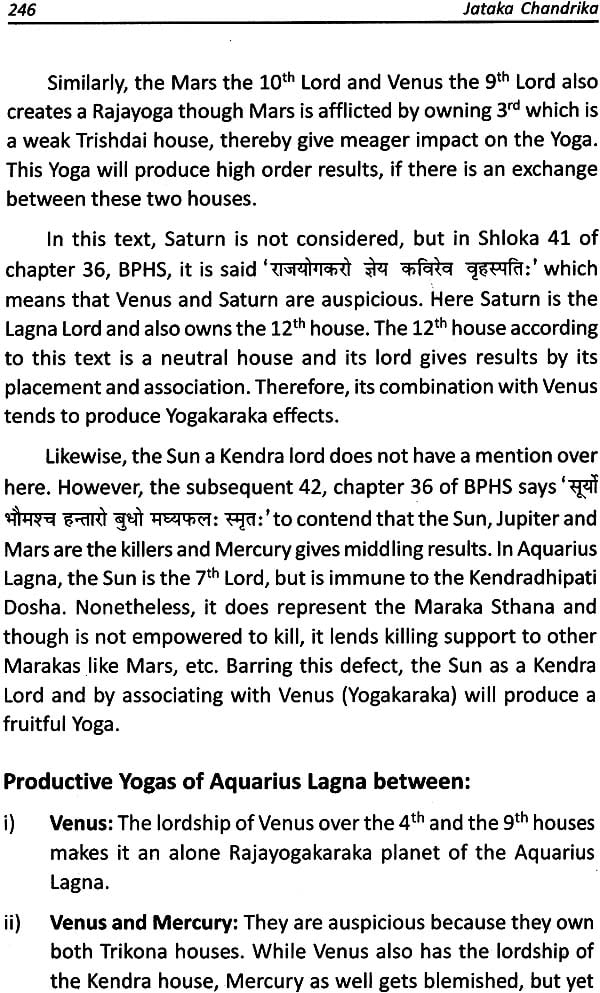 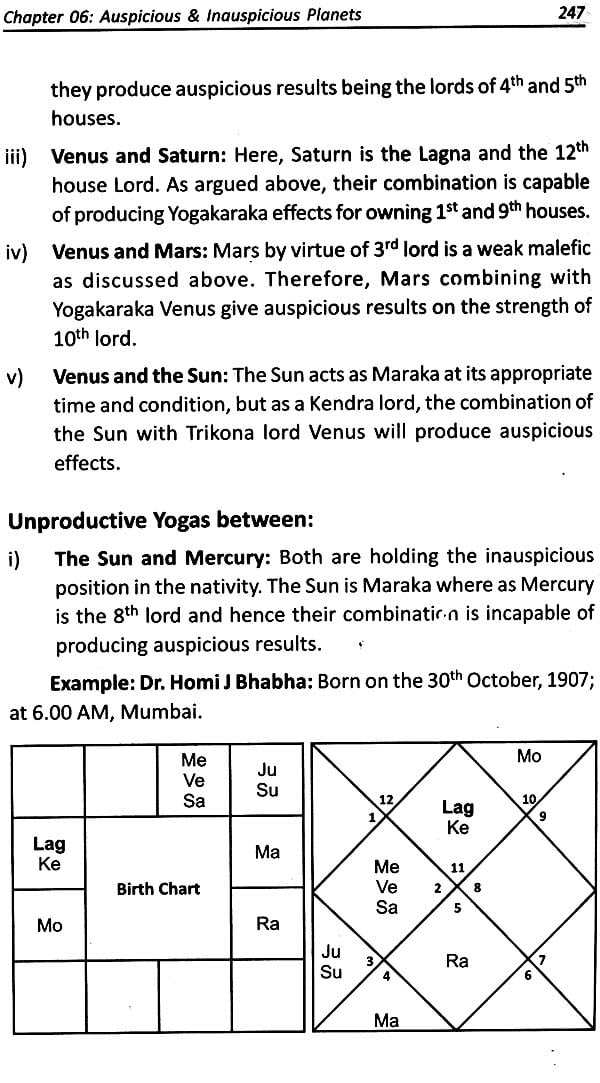 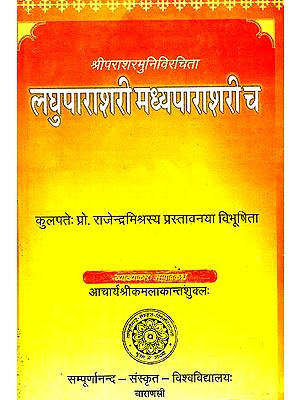 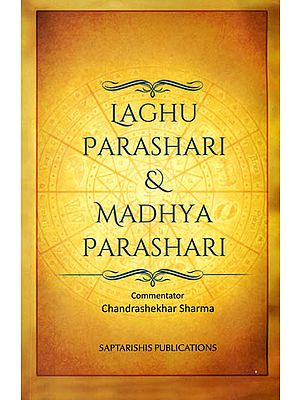 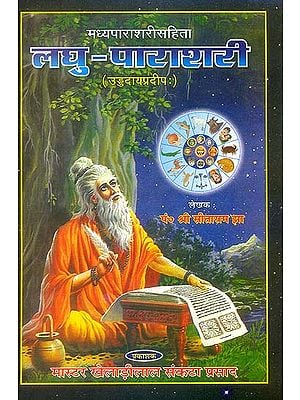 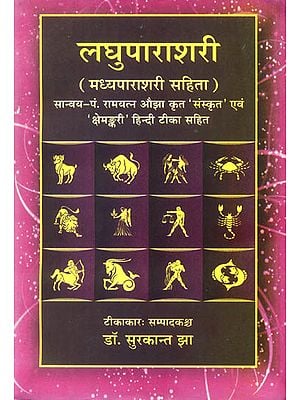 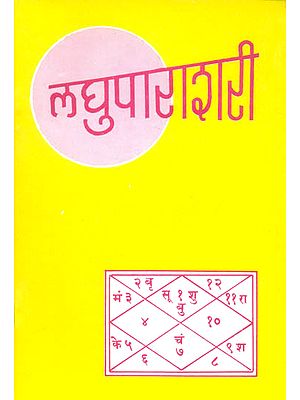 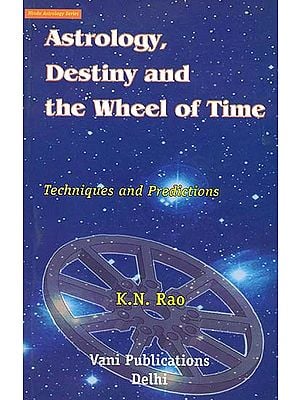 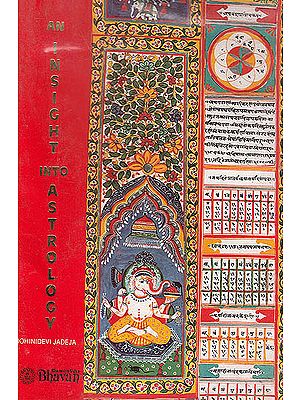 An Insight Into Astrology
By Rohini Devi Jadeja
$31
FREE Delivery