Krsna Concept: An Analysis (With Special Reference to Harivamsa) 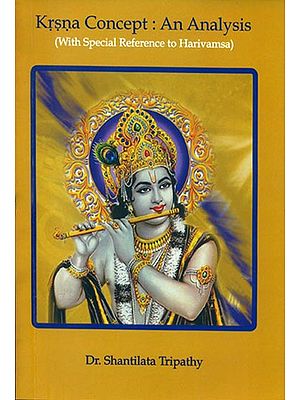 In this book a deep analysis has been made on the different aspects of Krsna, the saviour and the liberator. Justification was made with special reference to Harivamsa. that he was gradually deified. He was deified in his life-time. The Mahabharata has also described the causes of his deification. By applying the Eastern and Western canons of criticism, this work has tried to show how the tribal hero was assimilated into the Hindu culture and came to occupy a pre-eminent position in the Hindu pantheon.

Dr. Shantilata Tripathy was born in Tigiria village of Cuttack district in Odisha, did her post graduate strudies in Sanskrit and Ph.D. at Utkal University and taught in different colleges in the state. She worked as the principal of Satya Sai Women's Collge, Bhubaneswar. She was awarded with Meritorirous Medal instituted in memory of "ANN CHARLOTI ESCHMANN" for her reseach works leading to Ph.D. degree. More than twenty articles written by her were published in important journals in Odia, Sanskrit and English. She had special interest in analysing mythological concepts and characters.

In Indian history, religion and literature, Krsna is one of the most interesting and important characters. Scholars both in the East and the West have written volumes on Krsna. There is no limit to the number of papers written on the subject. As a matter of fact in com- parison with any other subject of Hindu religion the important and interesting figure of Krsna has attracted the attention of the Indologists throughout the world.

To a Hindu, Krsna is a reality and He is consid- ered as the saviour in distress and last resort of all. Even today most of the Hindu families worship Krsna as their Supreme Lord and accept the scriptures like the Mahabharata. the Harivamsa and the Puranas as holy and sacred as they depict the glories of Krsna, The Hindu is never concerned with the historicity of Krsna. He never raises any doubt or tries to investigate the problem. Rather he takes it sinful to search for evidences on him. It was only during the last century that the western scholars raised doubt regarding the historicity of Krsna. Numerous articles and papers were written on this subject and in course of time it became a prob- lem for Indolgists.

Scholars like Hopkins describe Krsna as a tribal god". There are other scholars like Keith and Gonda who are of opinion that Krsna represents the spirit of reviving vegetation". Grierson and Barth have traced the Solar origin of Krsna.

In the latter half of the 19th century and the 1st decade of this century some Western scholars pointed out similarity between the cult of Krsna and Christianity. They had the opinion that some aspects of the legend of Krsna were borrowed from Christianity". But since long such attempts to prove the child Krsna as the counterpart of Christ and to show the indebtedness of Vaisnavism to Christianity have been given up. At the first stage it was RG. Bhandarkar who dealt with the problem of Krsna. He was of opinion that the cowherd Krsna is different from the Vrsni prince Vasudeva". E.W. Hopkins who devoted his whole life to the study of the Epics distinguishes the three Krsnas by reference to the chronology of the texts in which they appear. Winternitz holds that "It is far more likely that there are two or several traditional Krsna who were merged into one deity at a later time. It is possible that Krsna was the founder of the Bhagavata religion, and ultimately made into an incarnation. It is possible that Krisna does not figure at all in the original Epic, and was introduced later perhaps to justify the actions of the Pandavas'?', But the Indian view is reflected in the Mbh and Hv. which is analysed by S. Radhakrishnan. He is of opinion that the character of Krsna as we get in the Epics and the Puranas is the fusion of three different entities: Krsna the teacher of the Bhagavadgita, Visni the ancient Lord of the Sun and Narayana an ancient God of the cosmic character and goal of the gods and men".

Scholars find differences between the Vedic Krsna, the Epic Krsna and the Puranic Krsna. Their identity receives no support from the Puranic tradition. The Krisna of the E.g Veda" who is a seer of Vedic hymns or connected with Angiras is not mentioned in the Puranas. Moreover the non-Aryan Chief Krisna referred to in E.g Veda" who is an Asura according to Sayana is not identical with the Epical and Puralnic Krisna. Even the Krisna Devakiputra of the Chandogya Upanisad and the Krisna of the Mahabharata are not identical. Some scholars believed that the Krsna of the Mahabharata, the Krisna of the Bhagavadgtta and the Krsna of the Puranas are three different persons. The Mbh. contains no reference to the childhood of Krisna; and the Puranas like Brahma, ViSDU, Brahmavaivarta and Bhagavata do not refer to the connection of Krsna with the Pandavas. Further it is argued that Krisna who often advocated tricky ways in the Mbh. war cannot be identical with Krsna the propounder of the Bhagavadgita which is an epitome of the essential religious text of Hinduism. It is definite that the lustful immoral Krisna of Gokula is not the same Krisna who is the friend of the Pandavas.