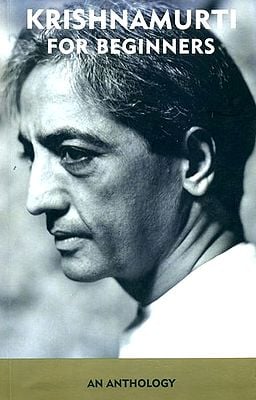 KRISHNAMURTI FOR BEGINNERS (An Anthology)

Krishnamurti for Beginners is an introduction to the teachings of J. Krishnamurti, meant primarily for readers unacquainted withy his work. The problems of daily living that confront every human being and Krishnamurti's original approach to them form the basis of the selections.

Krishnamurti held that truth is beyond the constructions of the human mind, beyond 'the known, formulated or imagined', and that in the search for truth 'the first step is the last step'. In the sense that new beginnings held a special meaning for Krishnamurti, all are beginners on the journey of life. And in this sense, the present volume is meant for all.

Jiddu Krishnamurti (1895-1986) was born in Madanapalle, Andhra Pradesh. As a boy, he was 'discovered' by the leaders of the Theosophical Society, who kproclaimed him to be the future World Teacher. However, in 1929, he disbanded the huge organization that had been built around him, and declared that his intention was not to found new religions, but to 'set man absolutely, unconditionally free'. From then on, for more than half a century, he traveled ceaselessly all over the world giving talks and holding dialogues, not as a guru but as a lover of truth. His teachings are available in a vast collection of books and tape recordings.

The best introduction to Krishnamurti is Krishnamurti himself-his books, video and audio recordings-and not interpreters and commentators. It is in this spirit that this book is being presented.

As the title of the book itself indicates, Krishnamurti for Beginners is meant primarily for those unacquainted with his teachings. The problems of daily living that confront every human being and Krishnamurti’s original approach to them, as well as his timeless vision of life and the sacred, form the basis of the selections. However, no single volume like this can hope to capture the depth and the width of the teachings that he imparted to the world for more than sixty years.

The Anthology comprises a variety of genres that Krishnamurti employed to communicate his message-public talks, answers to questions, writings, interviews, diaries, dictations, letters, dialogues, and discussions-and ranges over the period from 1948 to 1983.

An Introduction presents an overview of Krishnamurti’s extraordinary life and mission as the World Teacher.

The life and teachings of J. Krishnamurti, which spanned the greater part of the twentieth century, constitute a most original, and perhaps the longest, chapter in the history of religious philosophy. A legendary figure from boyhood, and hailed variously as Messiah, World Teacher, Buddha, Christ, and so on, Krishnamurti was a sage, philosopher, public speaker, writer, poet, educationist-a solitary pilgrim who went about the world for more than sixty years pointing out, to those willing to listen, the need to be a light to oneself.

Jiddu Krishnamurti was born on 11 May 1895 in the rural town of Madanapalle in Andhra Pradesh, south India. His parents Jiddu Narayaniah and Sanjeevamma were Telugu-speaking, middle-class, orthodox people, who were also devoted to Theosophy. When Krishnamurti was about ten years old his mother died, and shortly afterwards his father shifted his family to Madras in order to take up employment in the Theosophical Society at Adyar.

One of the basic tenets of Theosophical Society was that whenever the world came to the brink of a catastrophe, Lord Maitreya, the World Teacher, would appear; and, as he had done in various epochs in the past, he was soon to manifest in a human form to save mankind from its impending doom. In 1909, C. W. Leadbeater, a prominent leader of the Society and a clairvoyant, spotting the 14-year-old Krishnamurti on the beach in Adyar, saw that the boy had a most luminous aura without a particle of selfishness in it. He proclaimed that the boy would be the future Messiah, or the vehicle of Lord Maitreya, that the Thesophists had been waiting for. This surprised many because the boy appeared to be sick and mentally retarded.

However, Leadbeater’s prophecy was fully endorsed by the President of the Society, Mrs. Annie Besant. In 1911, to prepare those who believed in the Coming of the World Teacher, they founded a world-wide organization called the Order of the Star in the East, with Krishnamurti as its Head. Annie Besant also adopted the boy and tried to get him educated in England, but he did not pass a single examination. In 1922, at the age of 27, while he was staying in Ojai Valley, California, he underwent a mysterious spiritual experience during which he suffered excruciating pain and loss of consciousness. Going by what he wrote about it afterwards, it was a transcendental event that changed his life completely: 'I have touched compassion which heals all sorrow and suffering; it is not for myself, but for the world ...I am God intoxicated.’ This experience, which later came to be called ‘the process’ and which was accompanied by what he described in some of his books as the ‘benediction’, ‘otherness’ ‘sacredness’ and so on, was to repeat itself in various ways throughout his life.

Meanwhile, the Order of the Star in the East had grown into a vast organization with enormous wealth, properties, and thousands of followers all over the world preparing themselves to be the disciples of the coming Messiah. A Dutch baron made over to Krishnamurti his home, Castle Eerde, with 5,000 acres of woodland, which became the headquarters of the Order of the Star. However, Krishnamurti remained uncontaminated by all the affluence and adoration that surrounded him. Despite his deep loyalty to Annie Besant, whom he regarded as his mother, he was inwardly revolting against the religious structures around him and his own role in it, and his growing discontent found expression in his many revolutionary pronouncements.

The final parting of ways happened on 3 August 1929 when, in the presence of Annie Besant and 3,000 Star members, Krishna-murti dissolved the Order of the Star and returned to the donors all the wealth and properties that had been given for his mission. In a historic speech on the occasion, he declared that Truth is a pathless land and that his concern was not to found new religions but to set man unconditionally free. This was a momentous turning point in his personal life as well as in the communication of his teachings. Decades later when he was asked to make a statement setting out the ‘core’ of his teachings, he began by referring to this landmark declaration. From then on, dissociating him- self not only from Theosophical Society but from all organized religions, Krishnamurti embarked on the solitary mission he had spelt out so clearly and from which he never swerved. It was a mission that seemed to fulfil itself wherever he was and wherever he went, its intensity remaining undiminished by time and circumstance and, in fact, gathering new energy and momentum as his age advanced. Towards the end of his life, he said that when he stopped talking, the body would die; the body had only one purpose-to reveal the teachings. His end came in Ojai at the age of 91, six weeks after he gave his last talk in Madras. 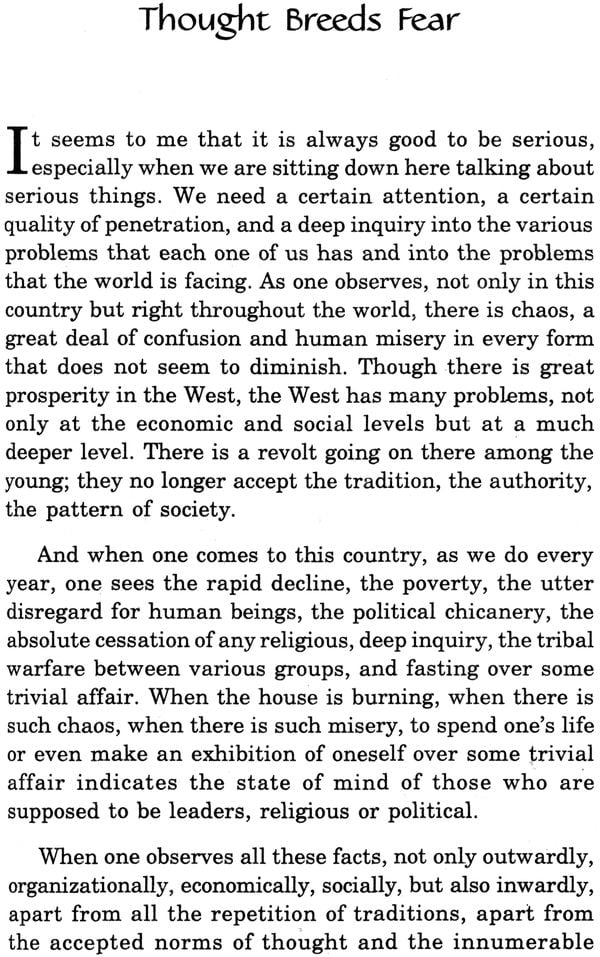 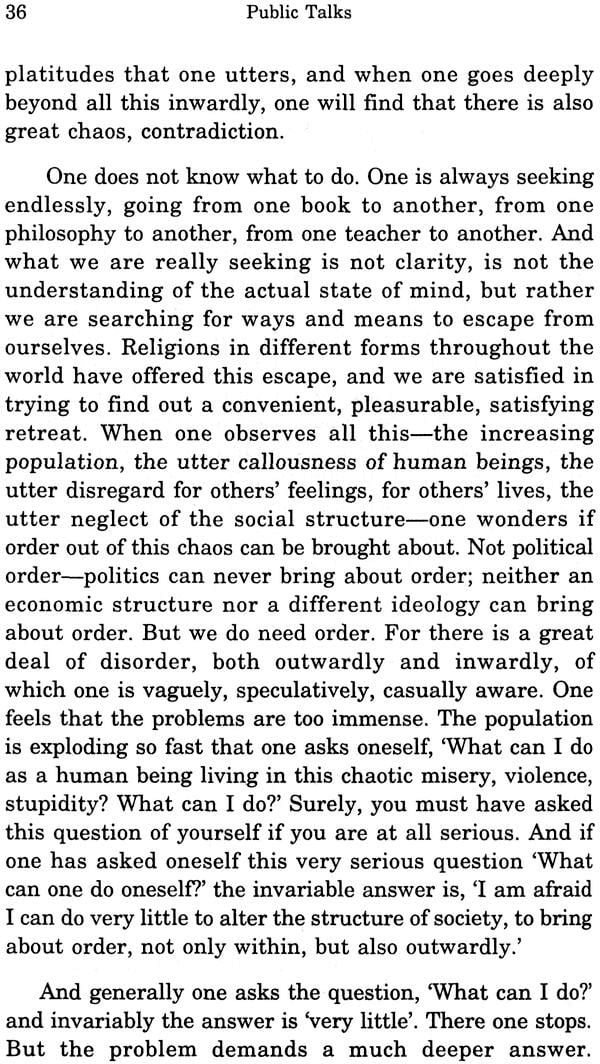 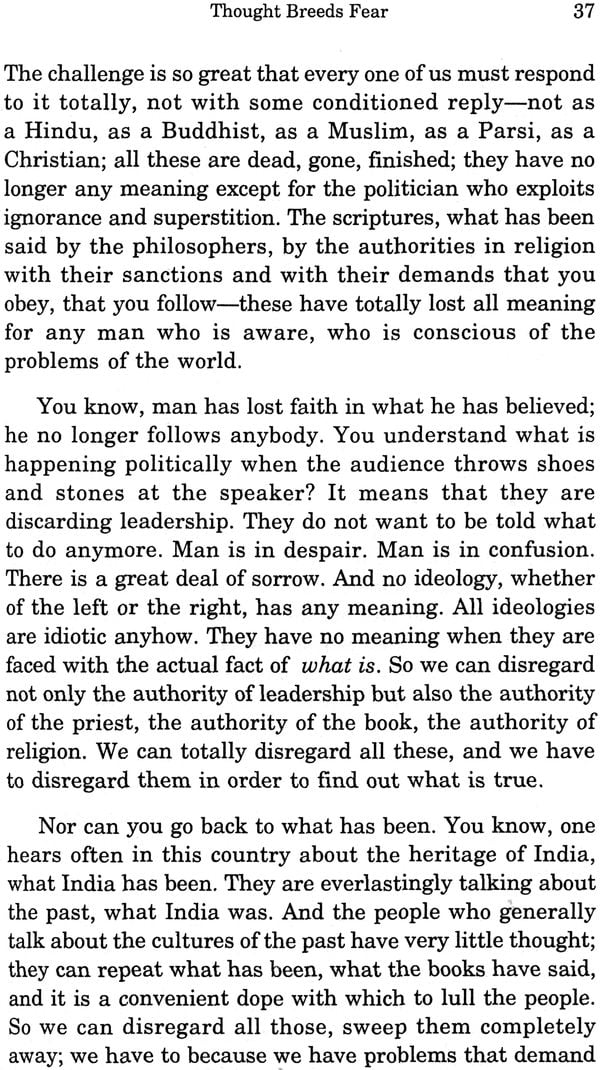 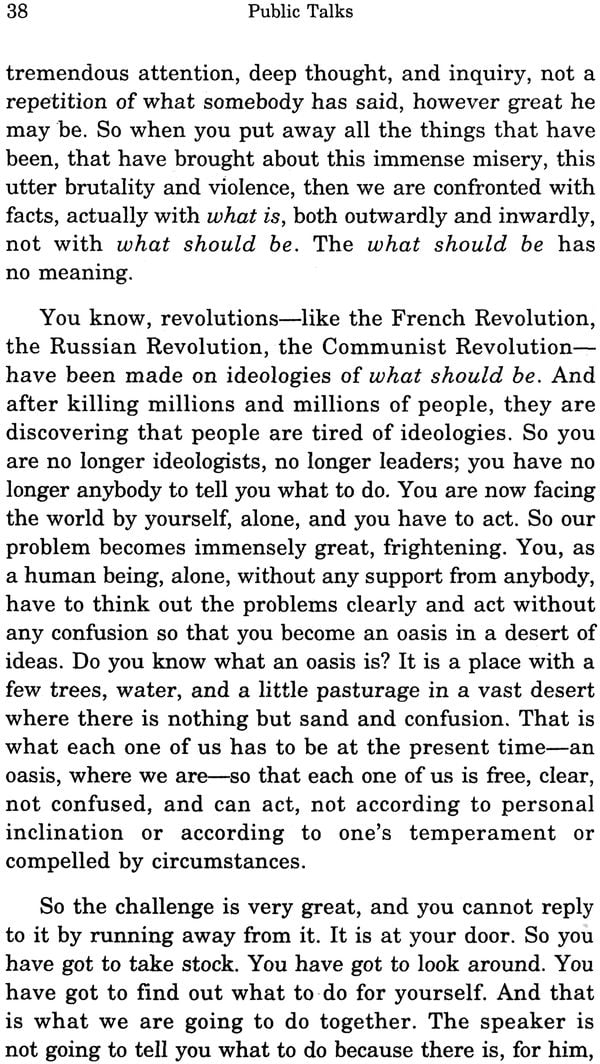 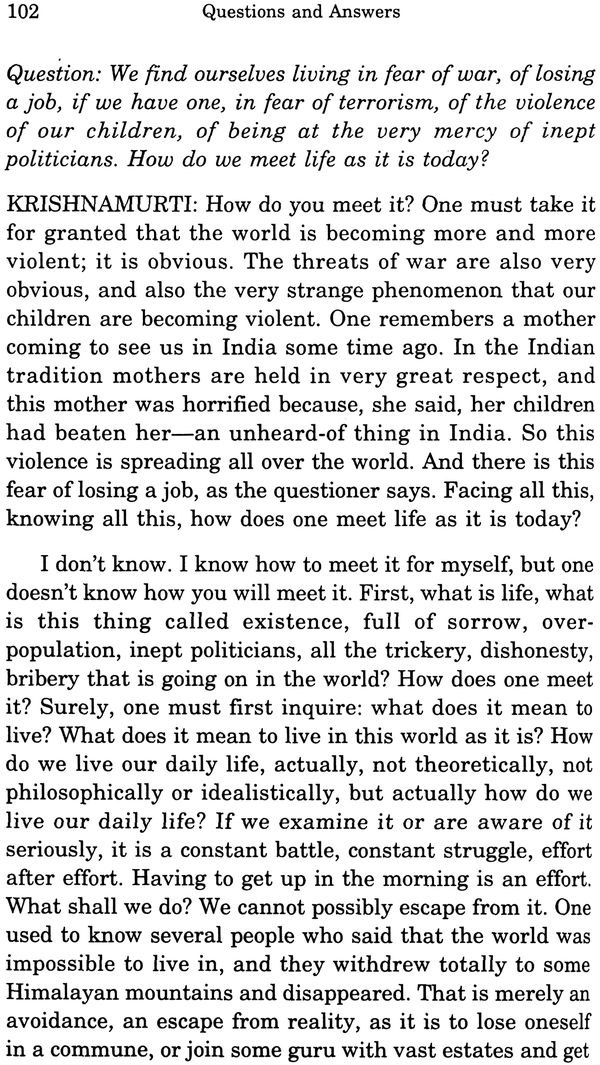 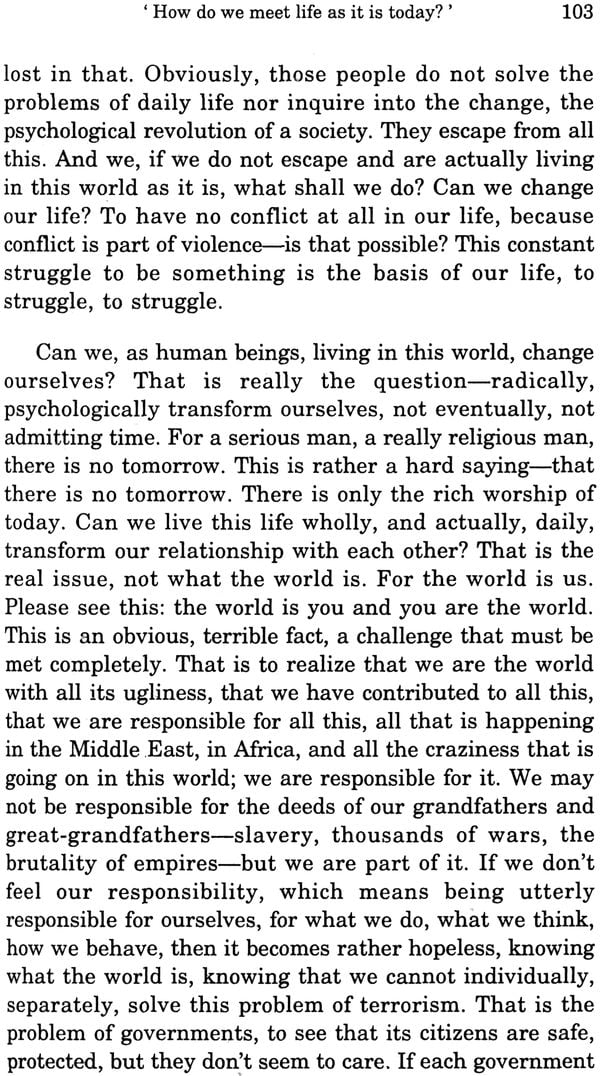 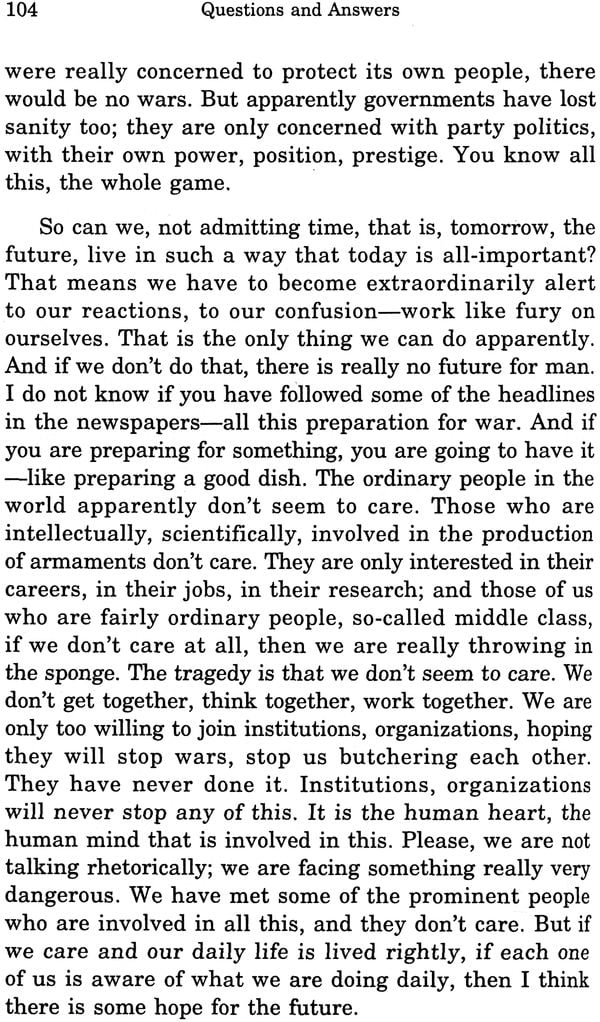 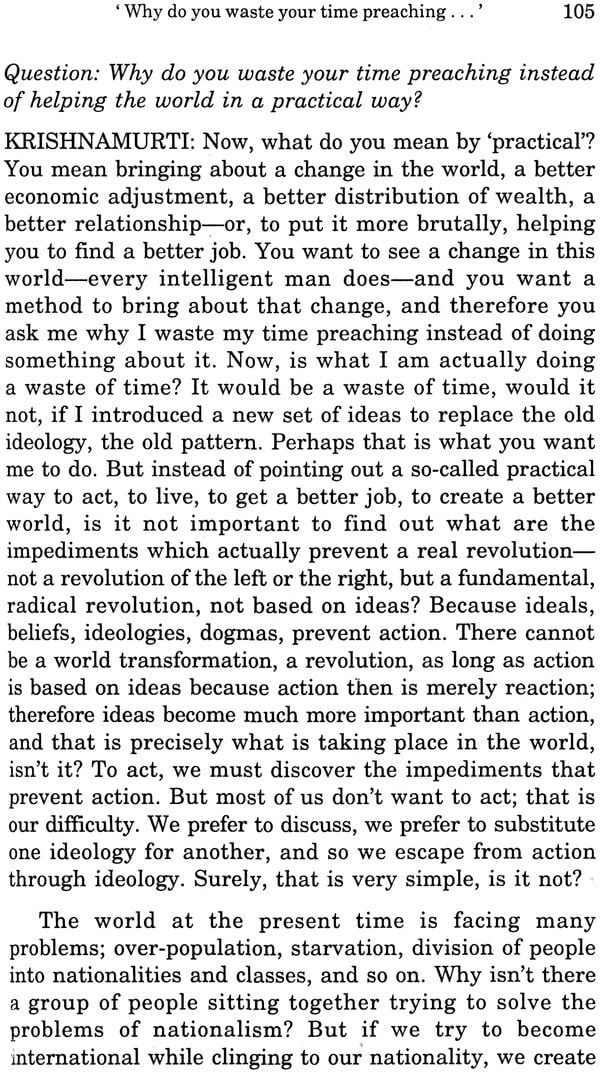 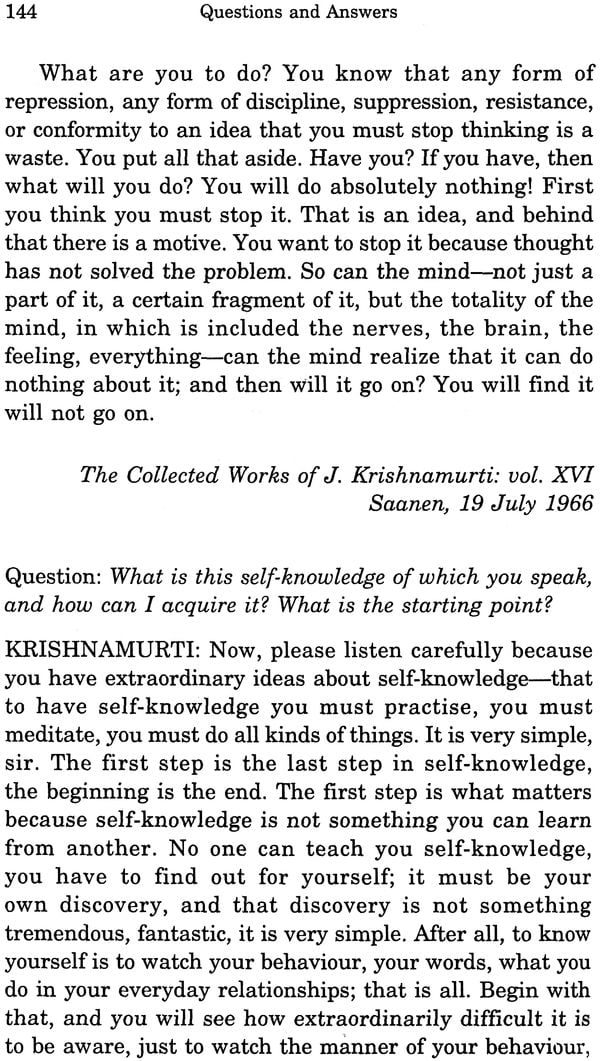 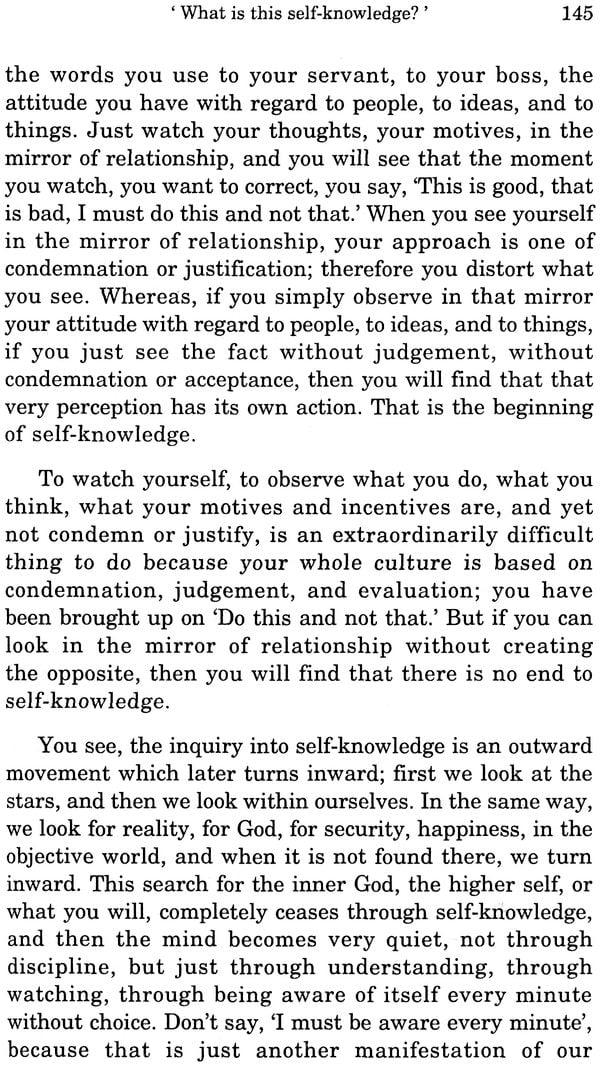 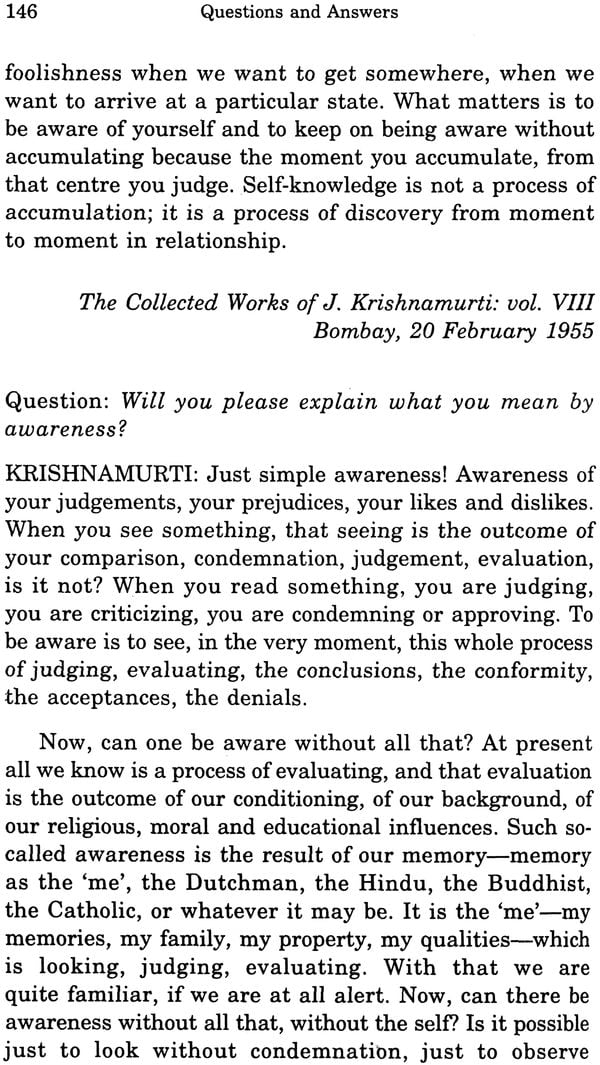 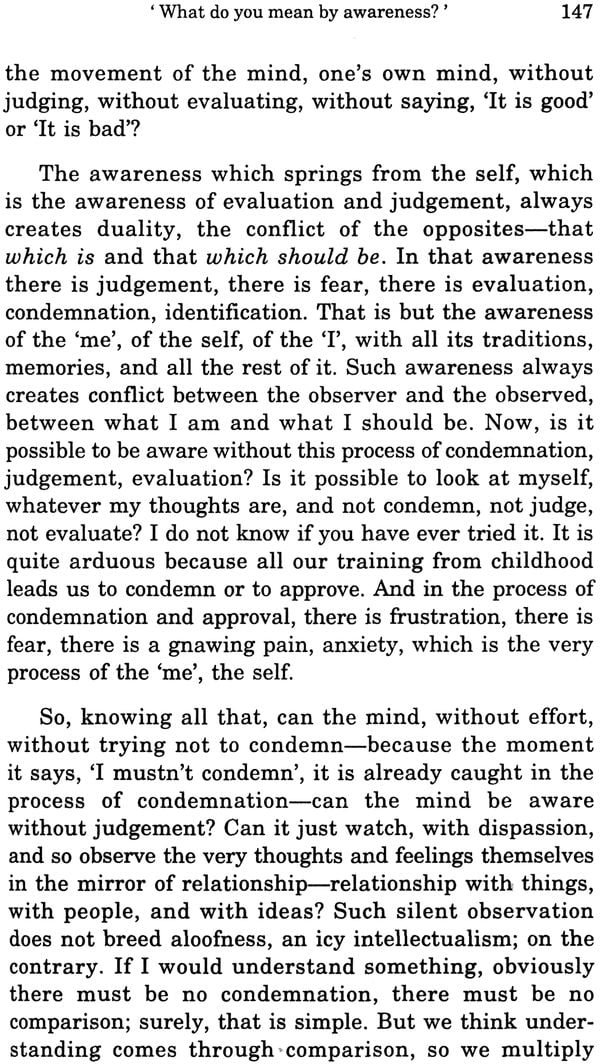 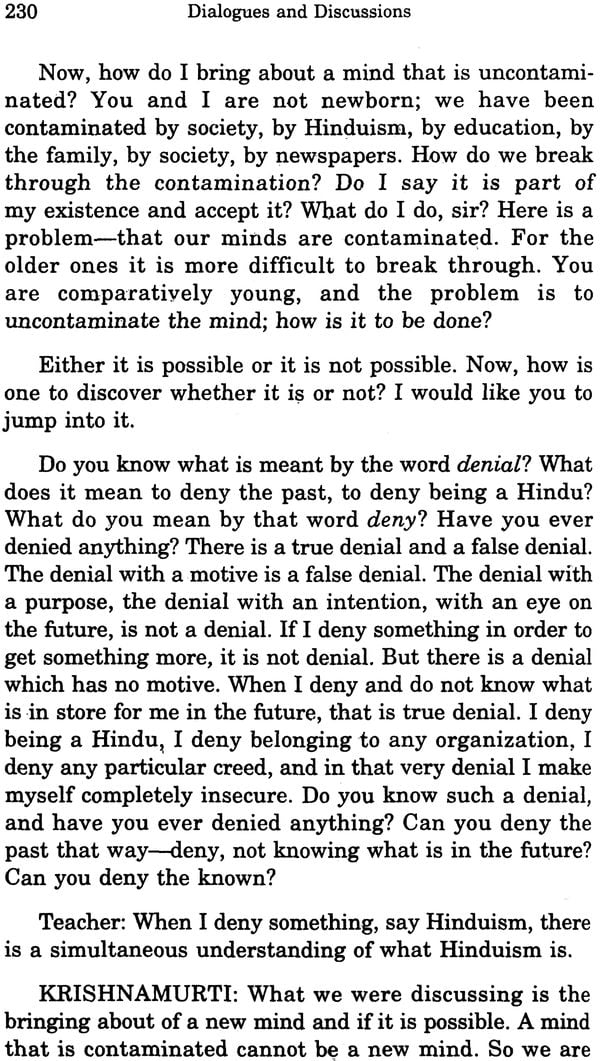 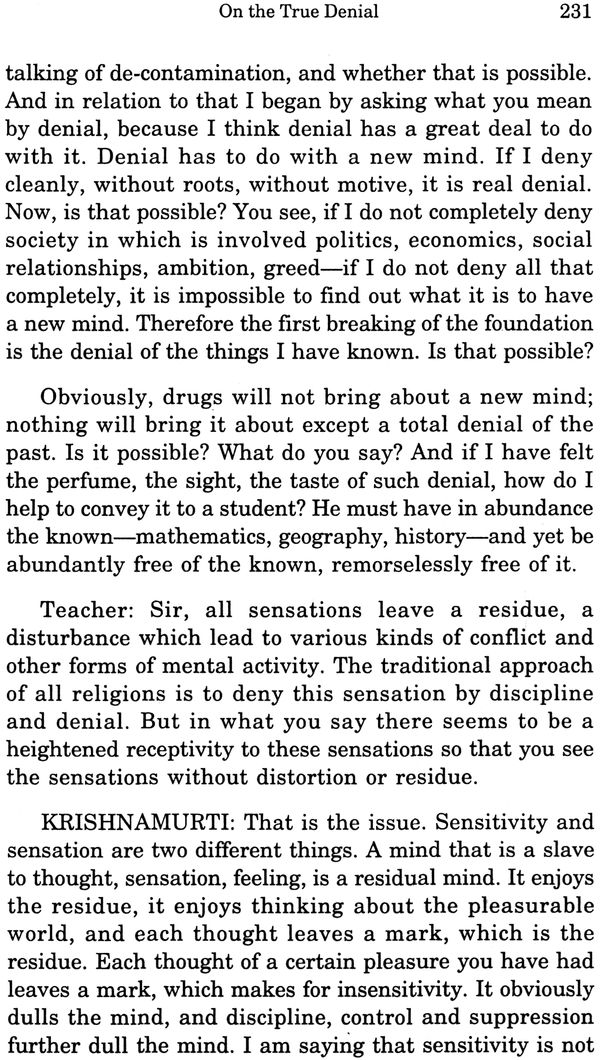 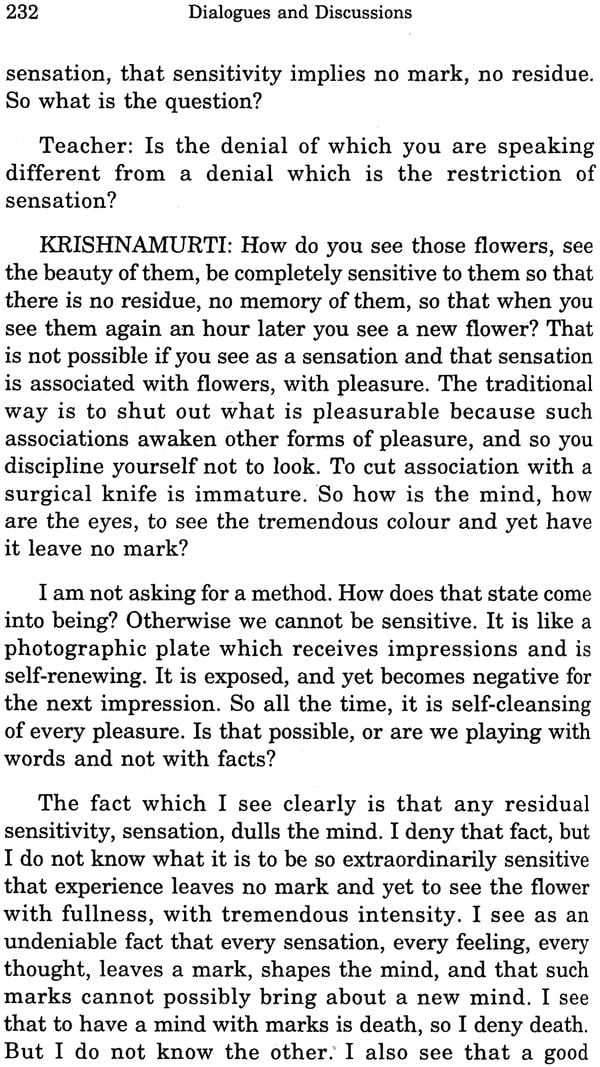 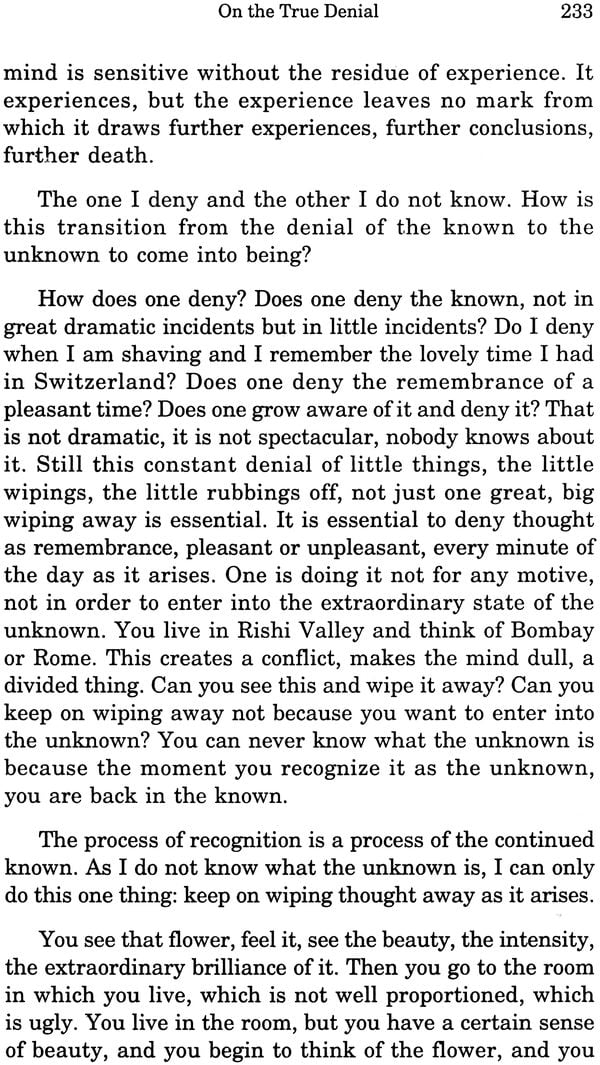