The Gulf or the Middle East has been the proverbial land of milk and honey for the average Malayalee. Generations have grown up hearing fabulous tales of the 'Gulf Malayalee, a creature who is now firmly ensconced in popular consciousness through movies and works of fiction. While popular imagination has endowed an almost mythical quality to the land, the truth behind the hardships that every migrant undergoes has been rarely documented.

Kerala's Gulf Connection. 1998-2011, situates the phenomenon of migration from Kerala to the Gulf in its economic and social contexts. Based on migration surveys carried out by the authors, the volume is a comparative study of the surveys carried out in 1998, 2003 and 2008. It looks at the changes migration has brought about in the lives of the families left behind by the migrant. It shows how the changes affect all aspects of life-from the types of houses they live in, to ownership of household gadgets and vehicles, and fuel used for cooking. The book also draws attention to the social implications of migration in the chapter on Gulf wives and its impact on them as they remain in Kerala, managing home and hearth while the husbands live and work in the Gulf.

This book also carries a two-part epilogue. The first analyses the panel data from the 1998 and 2008 surveys. The second evaluates the results from the most recent survey conducted in 2011 that throws light on migration during the global financial crises of 2008 and its aftermath on employment in the Middle East.

The volume will be useful to students and scholars of migration studies, economics, and development studies. It will also be of interest to policymakers and bureaucrats.

K.C. Zachariah is Honorary Professor at the Centre for Development Studies. Thiruvananthapuram, Kerala.

Kerala has had a long tradition of trade contacts with the West and the Middle East going back to 3000 BC. Cotton cloth from Malabar found its way to Egypt around 2600 BC. Records indicate that the Phoenicians visited the coast of Malabar in roughly 1000 BC in search of ivory, sandal wood, and spices. Muziris in Kerala, was in the ancient times, the most important sea port in the East; pepper cinnamon, cardamom, ginger and other spices were exported to the nations of the West from this port (Pillai 1940).

India's cultural and economic links with the Arab World are older than those with most other regions of the world. The trade contacts between India and the Arab countries go back several centuries. It is known that Indians have been living in Bahrain (which had been a protectorate under Britain prior to 1971) for nearly 600 years (Kondapi 1951). The establishment of the Bahrain Petroleum Company gave a fillip to Indian emigration to Bahrain in the 1930s.

early 600 Indians were employed by this company in the 1950s.

The cultural and commercial ties between India and Oman were strong during the British period. The administration and police of Oman were manned by personnel deputed by the Indian government in those days. The Indian merchant and banking community (mainly & om the north-western parts of India) was sizeable in Oman even during the nineteenth century (Nair 1986). According to a rough estimate, the number of Keralites in Oman (concentrated mostly in Muscat) rose from 20,000 in 1974 to almost a lakh in 1998 (Government of Kerala 1999).

In the rest of the Gulf region comprising mainly Kuwait, Saudi Arabia, Qatar and United Arab Emirates, migration from India is of more recent origin. Migration to Kuwait began in the late 1940s. The Kuwait Oil Company (KOC) began drilling for oil in 1946 and export of crude oil started in 1947. From then on, there ensued an exodus to Kuwait. According to rough estimates, the number of Keralites in Kuwait rose from a nominal 500-600 people in 1948 to about three lakh by 1972. The KOC, of course, was a prominent employer of migrants from Kerala. Keralites who migrated to Kuwait in the late 1940s and 1950s did not proceed straight from the state (This was also true of other destinations in the Gulf region in varying degrees). In most cases they were employed in and around Bombay as teachers, clerks and civilians in the army and were subsequently recruited by the Bombay office of the British Petroleum Company. At present, there are about 1.25 lakh persons from Kerala in Kuwait (Ibid).

Migration of Indians in significantly large numbers to Saudi Arabia began only around 1975. In the late 1940s, a small number of Indians (including Keralites) were employed on the staff of the Arabian- American Oil Company at Daharam in Saudi Arabia (Kondapi 1951). It is reported that around eight lakh persons, one-half the total number of emigrants from Kerala to the Gulf countries, are in Saudi Arabia (Ibid).

Migration to Qatar had commenced only in the late 1940s. In 1950, a few hundred Keralites were employed in the newly discovered oil fields in Qatar by the company Petroleum Concessions Limited. By 1973 their population in Qatar (mostly in Doha) had risen to about 30,000 and had increased to two to three lakh by 1991. The bulk of the Malayalee population in Doha in the 1970s consisted of petty traders, oil company workers and clerical staff. There were few professionals like doctors and engineers. The situation has changed in recent years with increased migration of professionals including management experts. The number of migrants from Kerala in Qatar is now around a lakh (Ibid).

Since the United Arab Emirates (UAE) does not derive its revenue from oil export, the bulk of the migrants from Kerala used to be employed as petty traders selling mostly food products.• Labourers formed only a small proportion of the migrants. For example, in 1969 there was only one Malayalee doctor in Abu Dhabi (UAE). This is broadly true also for other cities in the UAE like Dubai. The situation has undergone changes in UAE in recent times, but compared to other Gulf countries, the number of Keralites engaged in trade continues to be large in this region. UAE accommodates nearly 3.51akh Malayalees, more than one-fifth of the total number in the Gulf countries (Ibid).

We have seen that though Indian migration to the Gulf region has a history of several centuries, it received a fillip only with the discovery of oil fields and the commencement of oil drilling on a commercial basis in this region. The oil price hike in October 1973 marked a major watershed in the migration process. There was a massive demand for labour because of the sudden growth of the construction industry. The Gulf countries, which became immensely wealthy overnight, embarked on a frenzy of building new infrastructure like roads, ports and airports, as well as schools, colleges and administrative blocks, symbols of their newly-discovered wealth. They turned to the not-so-distant, non-Arab countries like Pakistan and India for the additional labour. On the basis of a sample survey conducted in Kerala by the Department of Economics and Statistics during 1992-93, it was estimated that the number of emigrants from the state in the Gulf countries was around 641,000 and that it formed nearly 96 per cent of the entire migrant Malayalee population in Gulf countries (Department of Economics and Statistics 1994). This estimate represents a phenomenal increase from the estimated number of 186 thousand in 1980 (Department of Economics and Statistics 1982).

There have been several studies on emigration from Kerala to the Gulf countries-some based on representative samples for the whole state and others based on selected centres of emigration; some conducted by the State Department of Economics and Statistics and the rest by individual researchers. For the purpose on hand, it is neither feasible nor necessary to refer to all the studies. We shall, therefore, refer briefly to the findings of only two relatively recent studies.

In a sample survey of emigrant households conducted in five taluks of Kerala representing five districts noted for high intensity rates of emigration (percentage of migrants in the population) viz., Chirayinkeezhu, Thiruvalla, Chavakkad, Tirur and Kannur, Gopinathan Nair arrived at the following major findings (Nair 1986): (a) At the time of the first migration, nearly four-fifths of the migrants were young, below 35 years of age and 50 per cent of them were unmarried; (b) The vast majority of the migrants were literate, illiterates accounting for only less than seven per cent. Among the literates, the below-matriculates predominated, accounting for nearly 70 per cent. The proportion of degree holders was extremely small, and formed less than three per cent. Except for a small proportion of about six per cent, the migrants had little professional or technical education. In terms of vocational training also, the migrants were mostly an uninitiated lot; (c) The occupational distribution showed that about six per cent had been, before emigration, in the following categories: professional/technical/ administrative personnel, teachers, para-medical workers, draftsmen and surveyors, and clerical and related workers. Nearly 45 per cent were skilled or semi-skilled workers. The remaining workers were unskilled or unemployed. Nearly one-half of the migrants had been non-earners at the time of first migration. Two-fifths had earnings of less than `500 a month; (d) The preponderance of Muslims in the number of return migrants may be seen as reflective of the fact that they dominate also in the number of migrant workers to the Middle East; (e) The age distribution of migrants at the time of first migration did not show much differences between religious groups, except for the fact that the proportion of persons above the age of 25 was higher among Christians than among the Hindus and Muslims and that the proportion of persons in the age group of below 20 years was the highest among Muslims; (f) The general educational status of migrants belonging to Muslim community was the lowest, of Hindus higher and of Christians, the highest. The proportion of matriculates and higher qualified persons was about 16 per cent among Muslims, 37 per cent among Hindus and 71 per cent among Christians; (g) The most important reason for migration given by 45 per cent of the respondents was lack of employment opportunities at home. About 27 per cent reported that migration was sought mainly to discharge family obligations and responsibilities such as marriage of sisters/ daughters, education of children or medical treatment of members of the households (h) The information regarding the opportunities for migration reached the majority of migrants not through official or institutional channels or mass media, but through friends, relatives and neighbours in the Gulf region; (i) The expenditure of migrants on various items such as passport, visa, medical check up, air ticket and NOCs (no objection certificate) on average amounted to a little over `9,000. The vast majority of the respondents (63 per cent) had incurred only less than `10,000; for 41 per cent, the costs had been only less than `5,000; (j) Two-fifths of the migrants resorted to borrowing for mobilising funds for financing costs of emigration. The major source of borrowing was friends and relatives because the terms of borrowing from them were very liberal. About one-fourth of the migrants had their own savings, and nearly one-fifth were able to draw upon their parents' savings; (k) The major destinations of migration were Dubai, Abu Dhabi and other UAE centres which together accounted for more than two-thirds of the total number of emigrants. Saudi Arabia employed about one-eighth and Qatar more than one-twelfth. One in every 20 worked in Bahrain and one in every 25 in Oman. 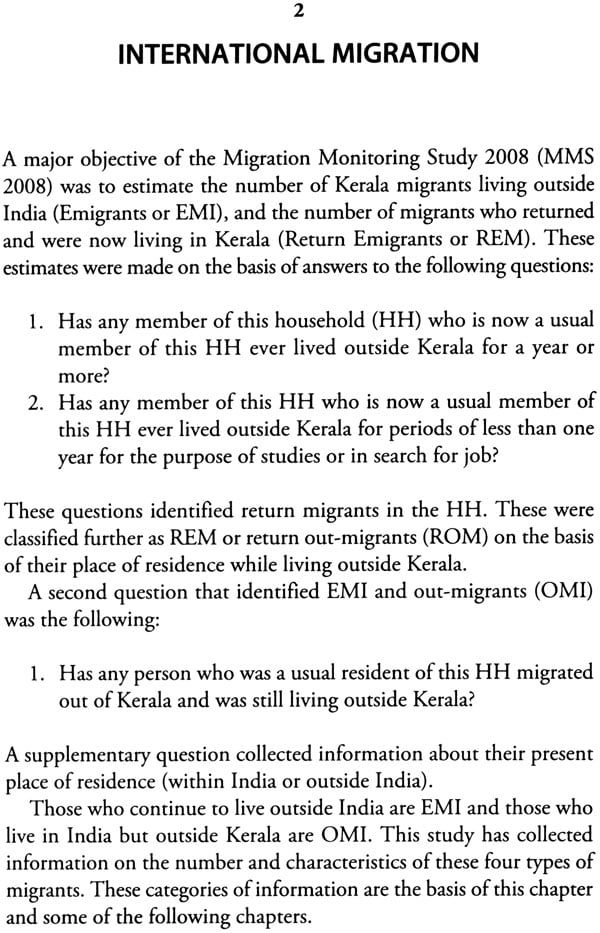 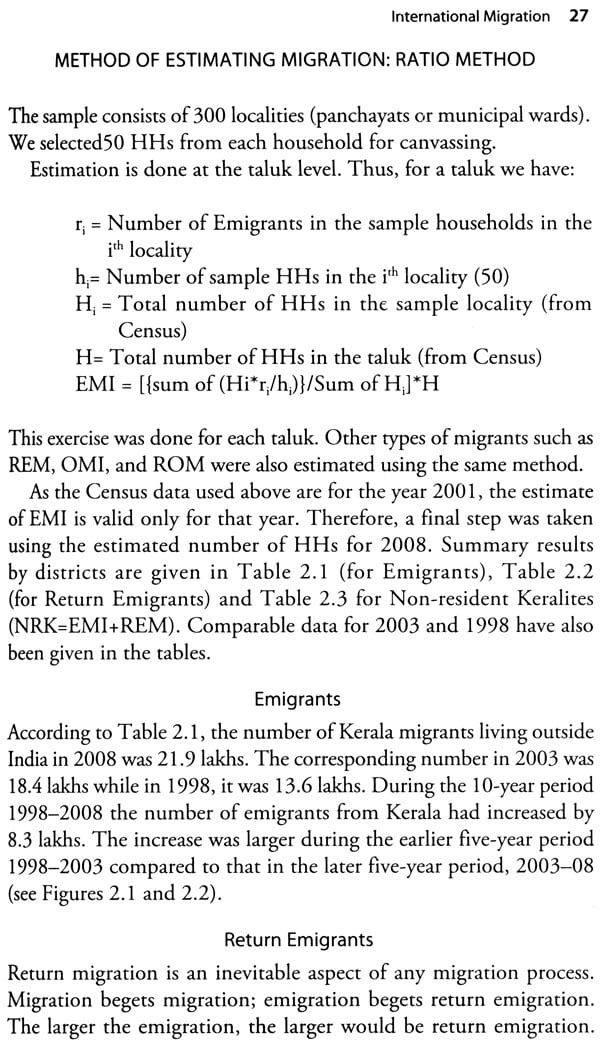 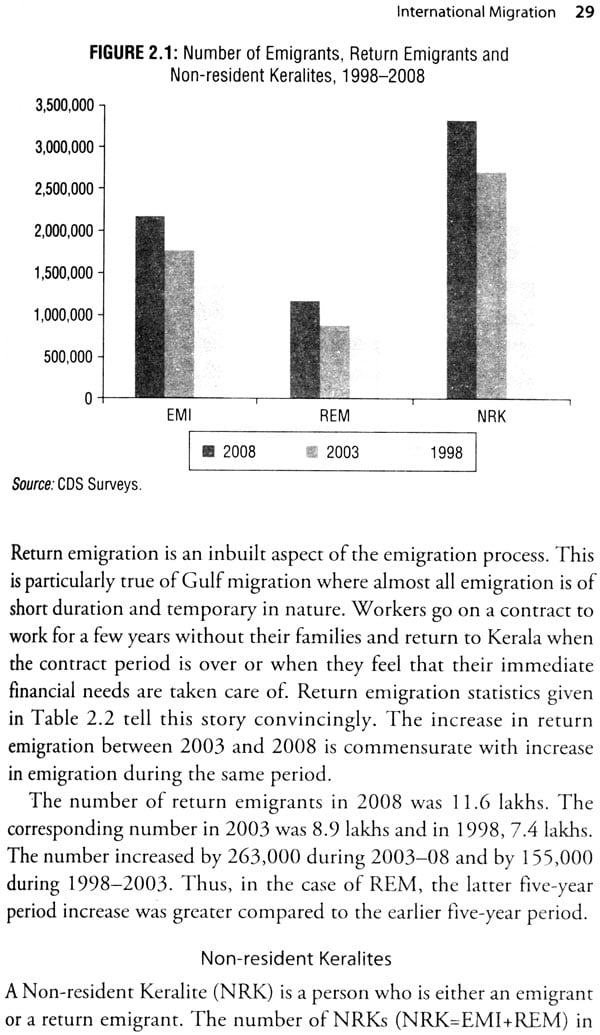 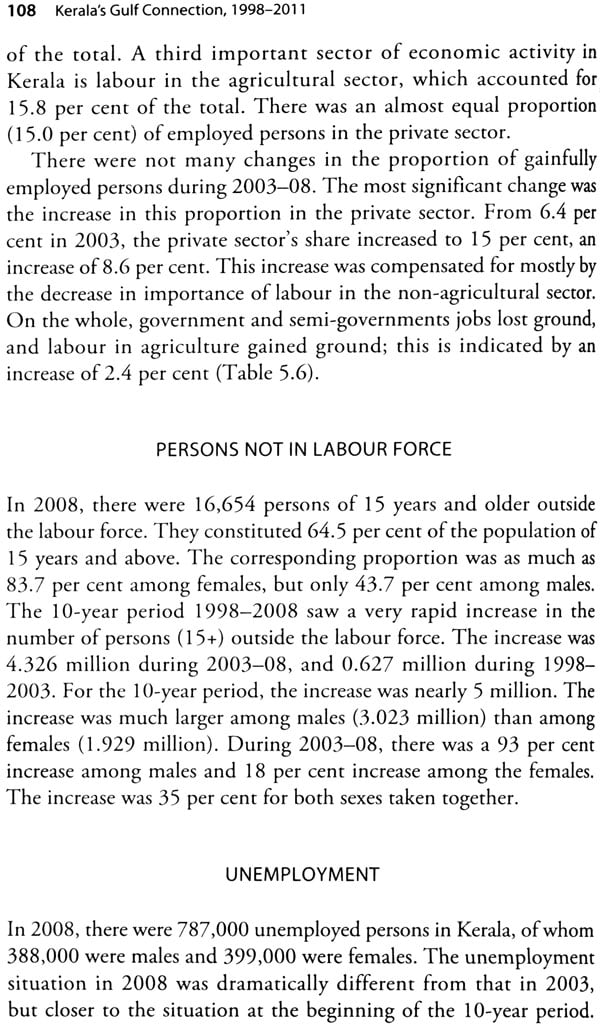 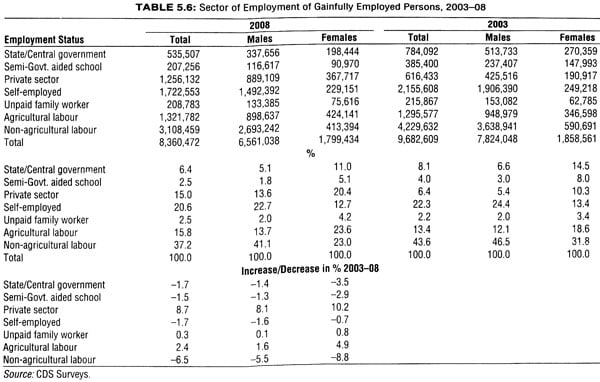 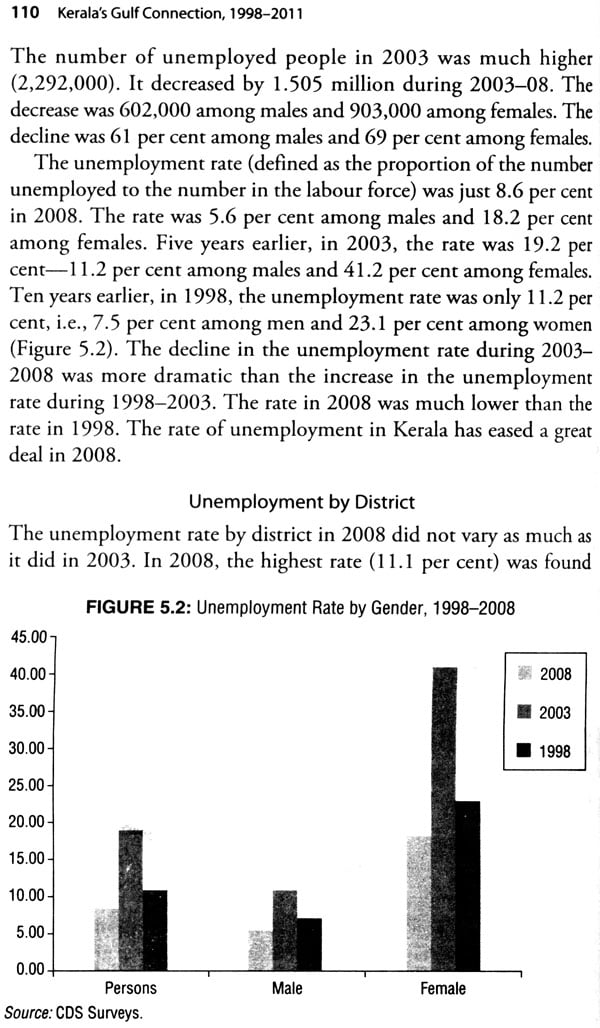 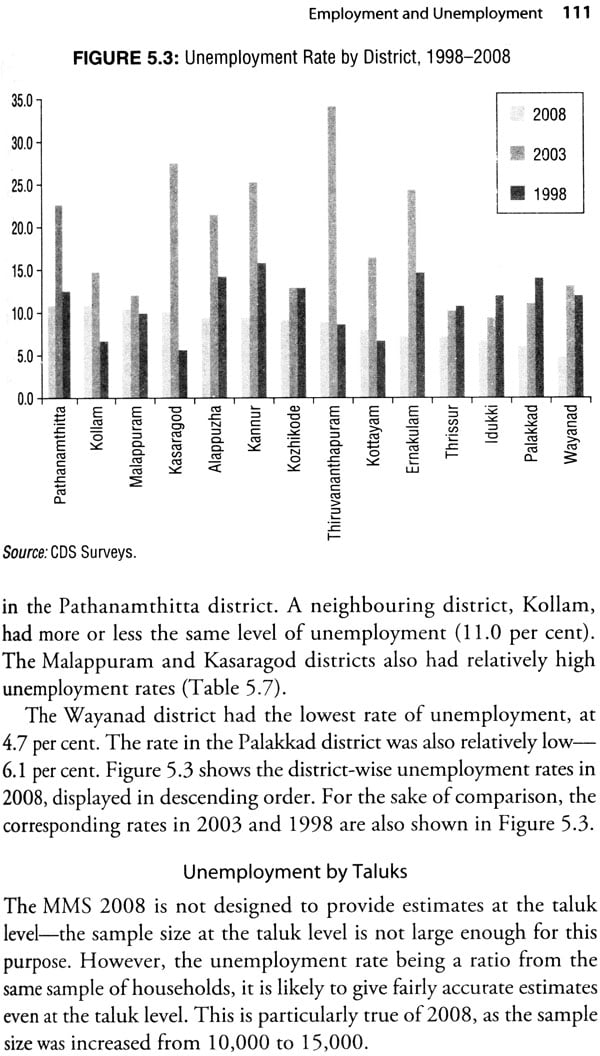 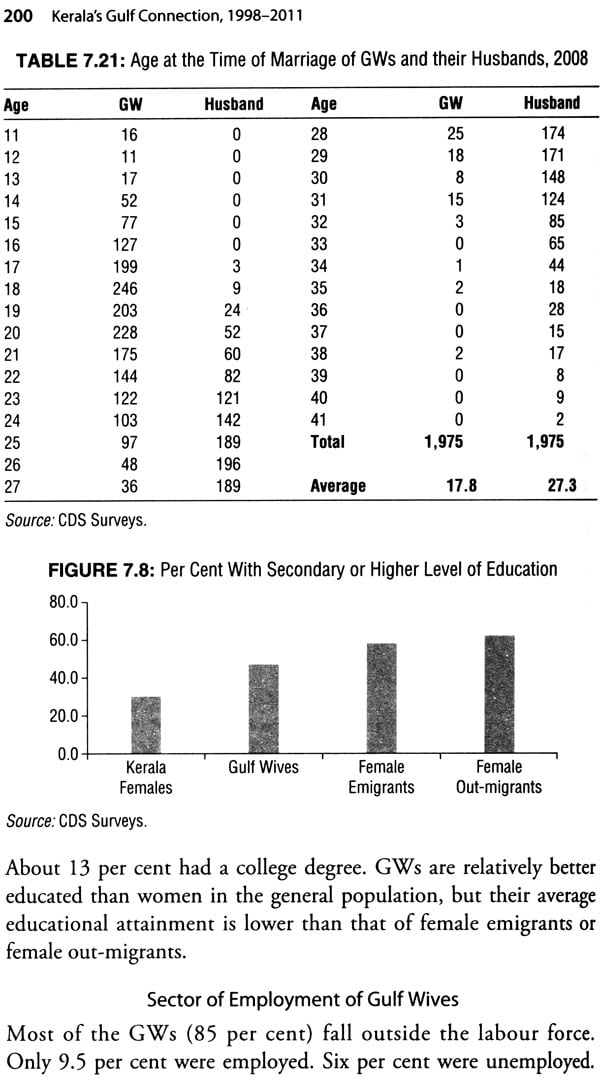 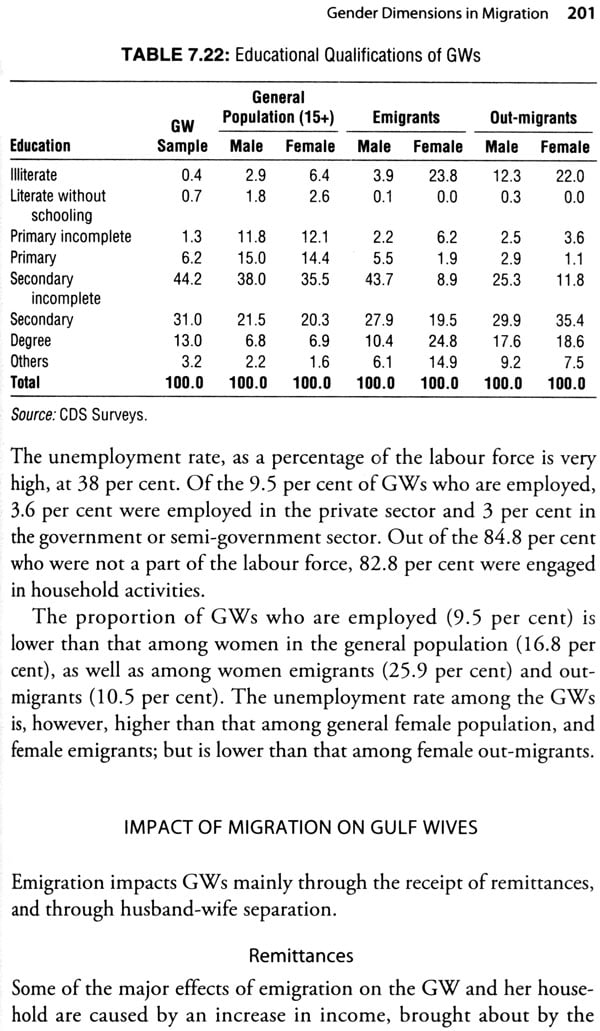 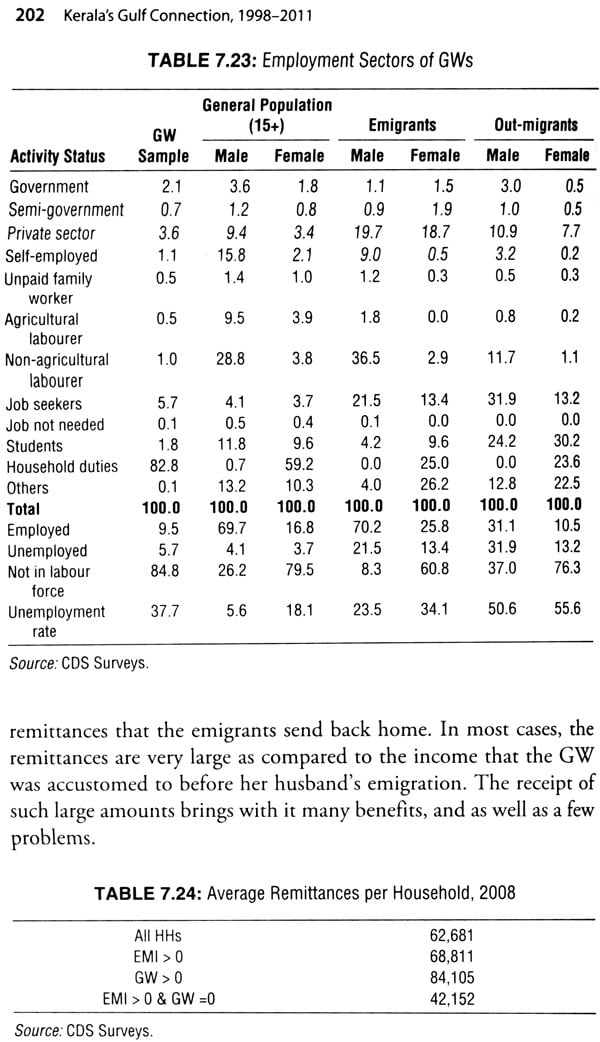 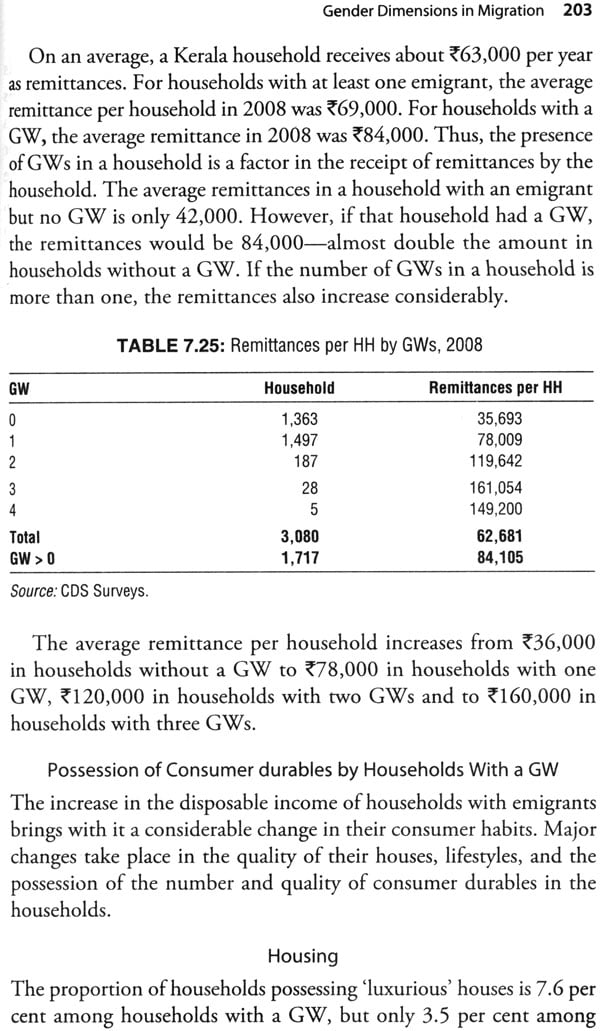 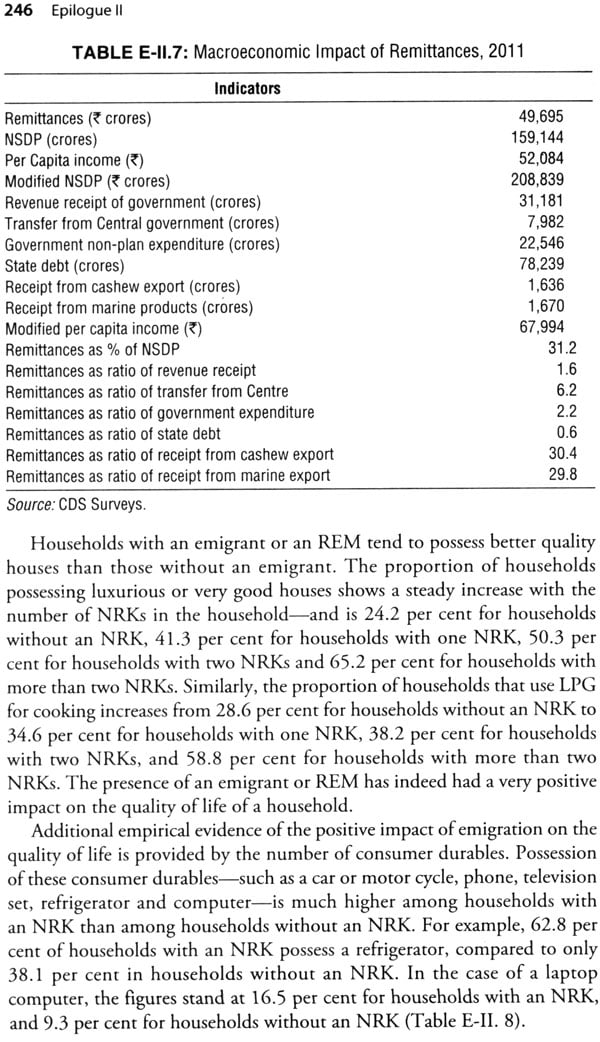 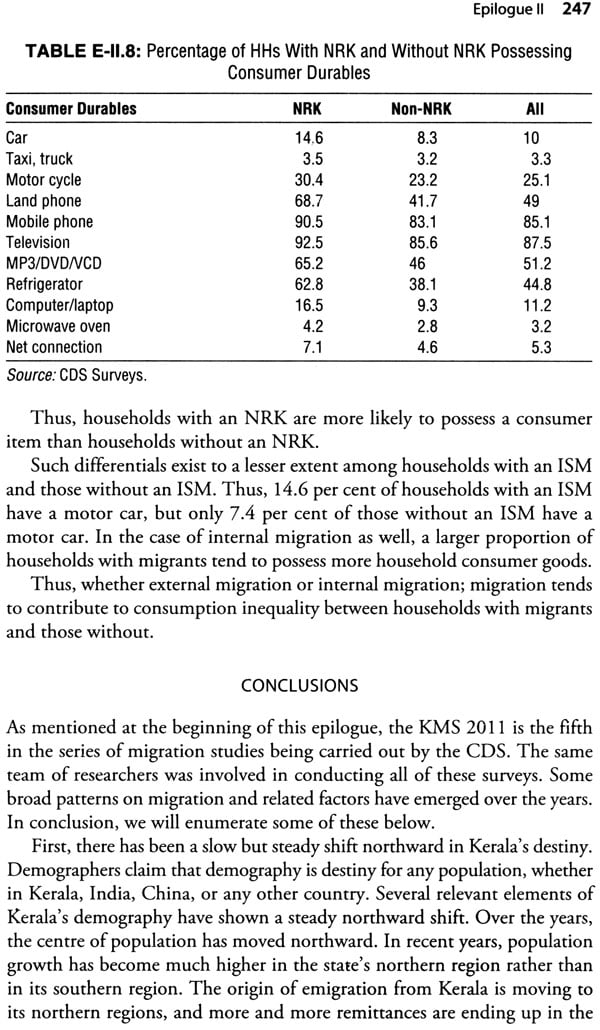 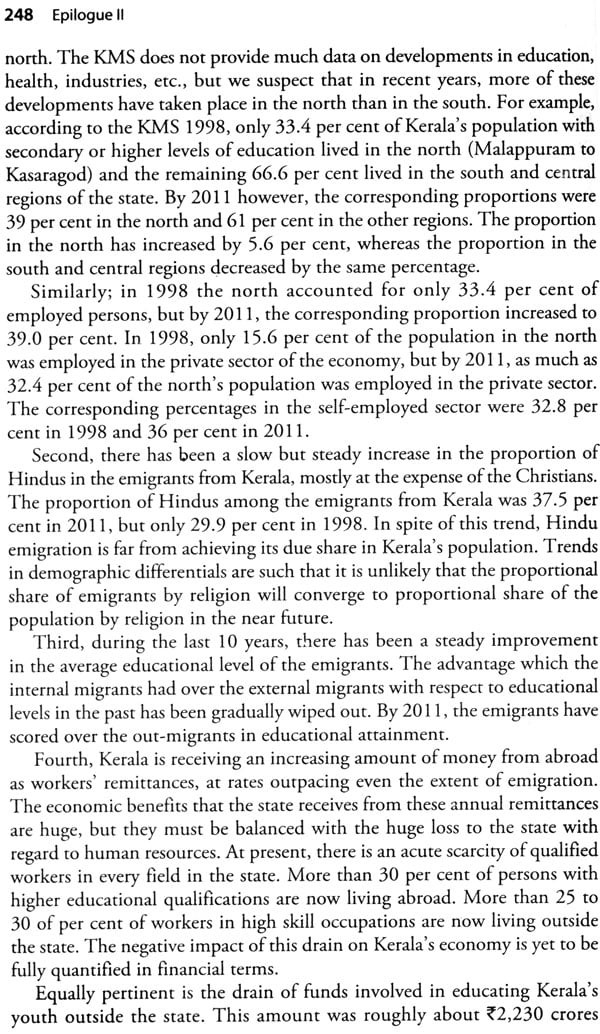 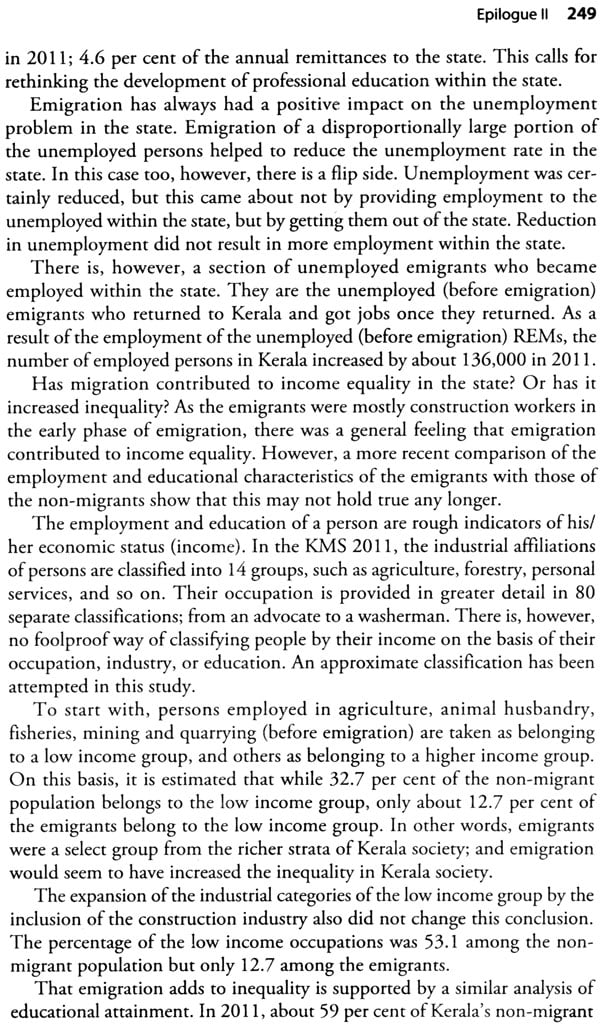 India on Television (How Satellite News Channels Have Changed the Way We Think and Act)
By Nalin Mehta
$23.20
FREE Delivery
$29  (20% off)