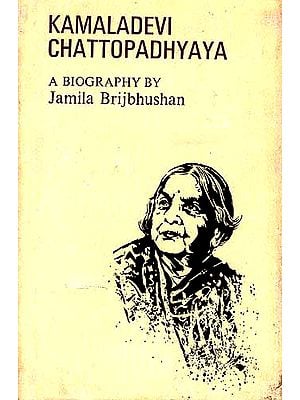 Shrimati Kamaladevi Chattopadhyaya has blazed the trail in a number of fields such as theatre, cooperation and handicrafts. Women's liberation enthusiasts today would be hard put to find a cause which she had not championed years ago.

hard work and dedication to chosen causes have been her hallmark. She has fought for what she considered right, effusing to allow herself to be fitted into any mould or to compromise her beliefs to please anyone.

Dubbed the "supremely romantic figure" of the freedom struggle, she defied the british Government both in India and abroad, winning many spectacular victories.
The honours she refused-governorship, ambassadorship and vice-presidential nomination-would make any politicians, mouth water and her journalistic achievements have been of an order to satisfy the most demanding editor.

A Truly remarkable personality who, perhaps, more than any man in India deservers the label-"a Renaissance man".

Jamila Brijbhushan is a well-known author and journalist whose books" Indian Jewellery, Ornaments and Decorative Designs: and "Costumes and Textiles of India" are reference works. "Indian Metalware" won the award for Excellence in Designing and Printing as the best book of the year. Widely traveled, she has lived for many years in Europe and the USA and has worked in various fields including the Press Information Bureau and the All India Handicrafts Board. She made a master copy of the language newspapers and journals of South East Asia for the Library of the Congress, Washington D.C., U.S.A. and complied a bibliography of Indian history 1858-1952 for the Rockefeller Foundation. Currently she is doing a survey of the perfume industry or India for the All India Handicrafts Board.