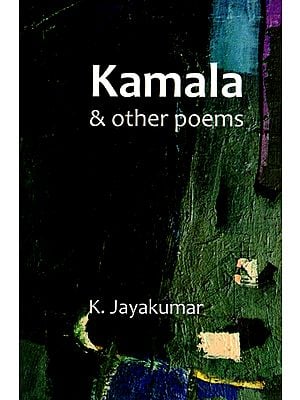 Kamala and Other Poems

The waiting and anxiety that the genuine poet feels when a book of poetry is freshly sent to the press is so dearly evident in K. Jayakumar's volume of English verse: Kamala and other poems. The title poem opens with these lines:

I have waited to plant

The sapling of this poem

In this fresh pit

We will look at this long poem a little more closely eventually but at this point suffice it to say that for the poet the wait is over: he is through! The poems in this volume throb with a sense of vitality that a fresh plant would reveal when given the right environment to thrive. Twenty five poems in all are what this slim volume proffers and I am sure the discerning reader will emerge fully satiated after having par-taken of the agony and the ecstasy, the twists and turns of the inner life of a sensitive soul. There is a certain sense of sincerity that marks the poetic language of jayakumar-I would see it as belonging to "the cult of sincerity" (borrowing the tem from the famous essay of that name by Herbert Read). Just anyone curious enough to flick through the following pages would certainly feel this sense of genuineness, a profound attempt to reach forth into the essence of language and not to be a mere spectator in a linguistic game of hide and seek that most poetry of the present suffers from. The poet longs to embrace each fleeting word, every fluttering phrase, to the extent that he is even prepared to forfeit his talent for poetry and turn to the imagery that the art of painting would offer ( it is significant that this volume closes with a poem that professes a resolve to paint) in a finality of farewell to words.

In a poem tided Invisibles, we read:

Every bird that flies

Knows the agony of a broken wing,

Behind every completed poem

Is a wandering ghost of some helpless pain.

The poet is so acutely conscious of the act of composing, even when the naturalness of the imagery of the bird in flight figures metaphorically over the skies of his imagination. This sense of self-awareness is a marked characteristic of Jayakumar's craft. The closure with, "Every love/ Has secret doors of deception," leaves the reader with the acute awareness of the double-dealing aspect of life itself. Happiness and joy are wanton visitors in a world rampant with deception and duplicity. The civil servant's realization of the evanescence of power and position is evocatively brought out in the poem on visiting cards:

They signify the ephemeral;

Amidst this clownish heap of

As a question mark.

That Jayakumar, the poet has always been alive deep within the heart of the civil servant is what such illustrative metaphors bear out. The desire for reaching out to the reader, the yearning for self-analysis, and the intense pressure of resorting to the words of the insightful poet as evocative prayer-these are among the highlights of his poetic world.

What makes the discerning reader reach out to a book of poems? Just when do we read poetry at all? Why do we relish the nuances of the poetic muse? The answer to all these questions might remain forever mysterious, or even unexplored, unanswered, But then for those who turn in-ward, poetry becomes a salve, a balm, a cure, for the distraught minds. In a book of poems when we casually flick the pages we can see that usually our attention is caught by certain words and phrases which affect us emotionally. They could be like tiny thorns on hedges where a floating feather gets caught in the breeze. These could be where the elusiveness of language is well brought out into the light and where the mind expands freely as in a moment of clarity. It could even be wholesome passages which describe a certain individual or situation or happening. Sometimes it could even be a reminder of a disaster. In Kamala and other poems, I am sure as many would discover there are several such tiny hooks where the mind would get caught reel about like a free-floating kite in the wind. This is a sure sign of the poet's success.

There are poems that close-in on persons like the title poem and the one on Khalil Gibran. While the second one features an apologetic tone while it bespeaks of war, fear, terror and destruction: you have every right to wage a war, says the poet, but then remember, he warns

In the mansions of your arrogance

And the edifices of untruths.

The entire poem throbs with remorse and the bitterness of human passion wasted on destruction and killing. There is a warning note that rings throughout when we witness the needless slaughter: "Keep a prayer and some compassion/ For the winner." jayakumar is concerned with the fate of the individual, with the destiny of humanity. He is not out of place in a world desirous of power and comfort, but at the same time he has but contempt for the sordidness of the self-seeking bureaucrat. His poetic sensitivity leads him on to the road trod by the major poet, Kamala Das. His admiration for the senior poet who broke savagely into the castles of the patriarchal power structures and the male-dominated Malayali sensibilities is evidenced in the long poem that gives the volume its title, Kamala. Kamala Das created new metaphors and fabricated fiction and fact as one long narrative. Her autobiographical My Story created a new wave of feminist discourse in the literary horizons of India and abroad.

Your words were white flamingos

writes Jayakumar in the long poem on the poet that endeavours to weave a literary and aesthetic portrait. 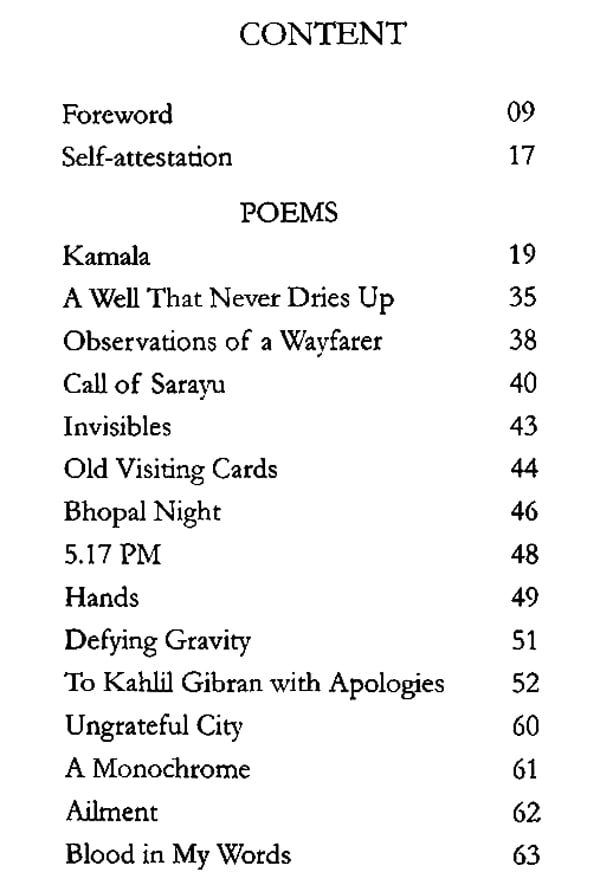 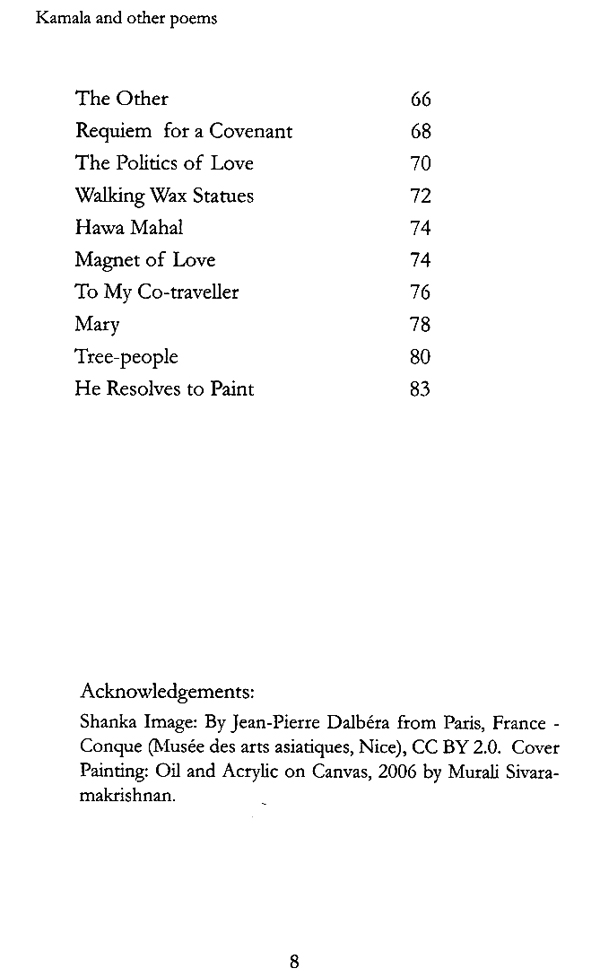 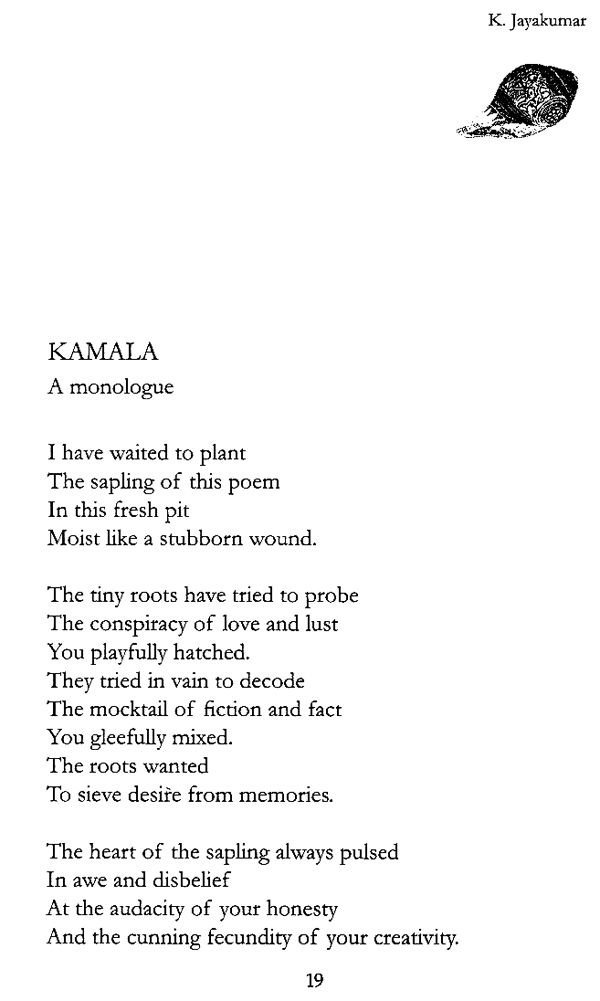 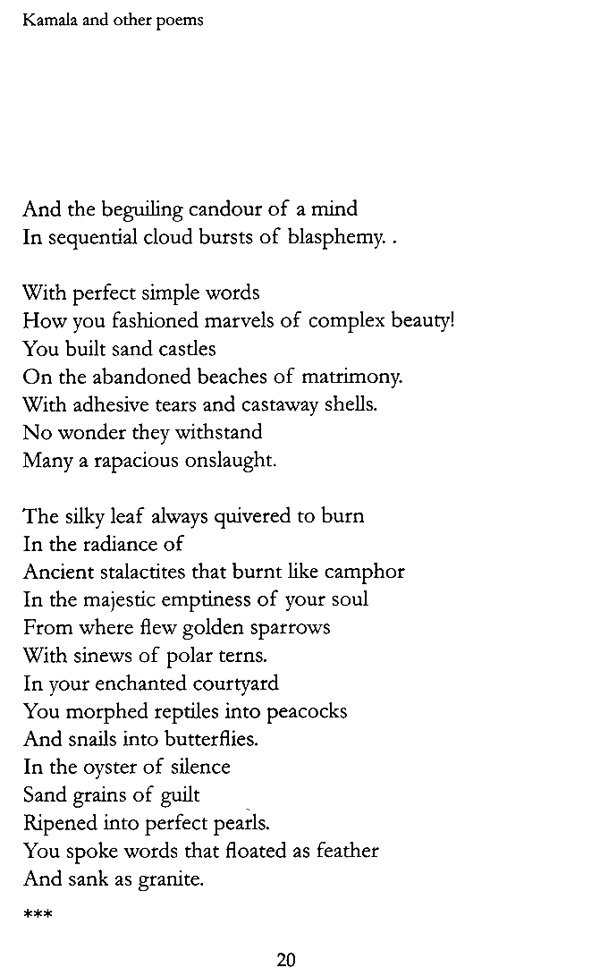 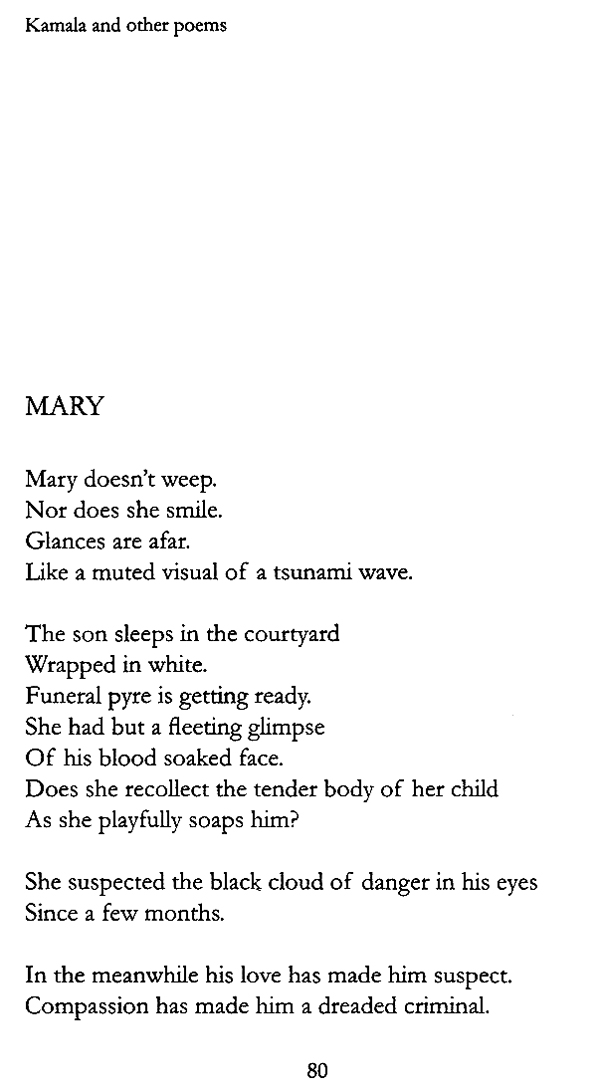 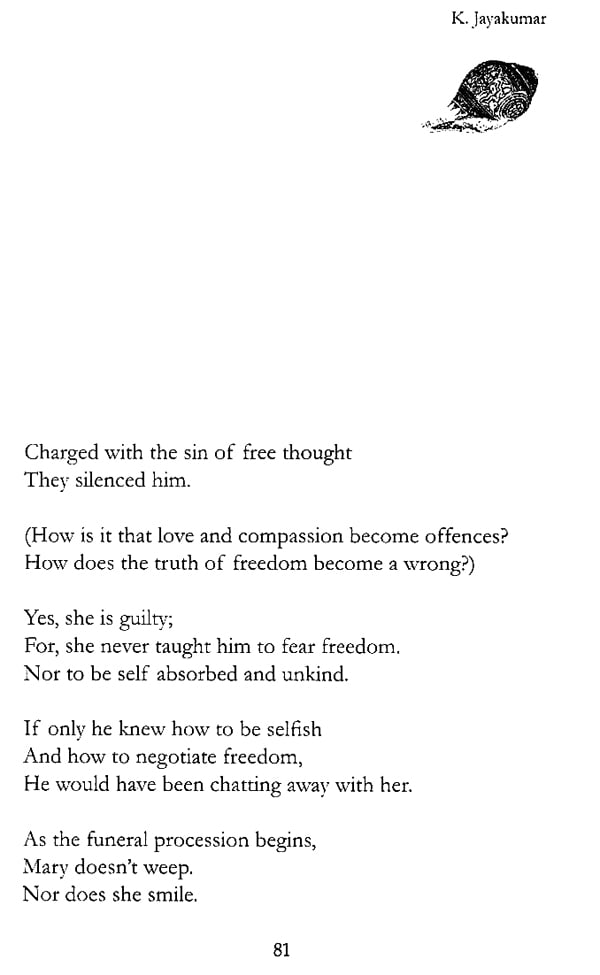 Vyasa's Savitri (A Verse-by-Verse Rendering and Some Perspectives)
By R. Y. Deshpande
$13 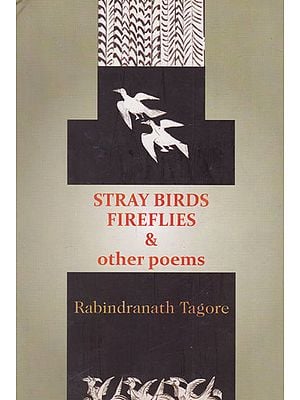 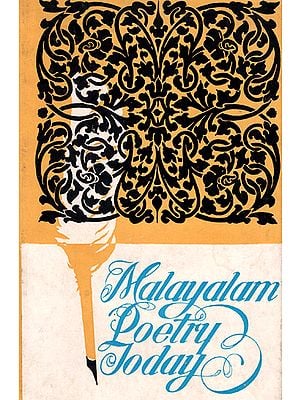 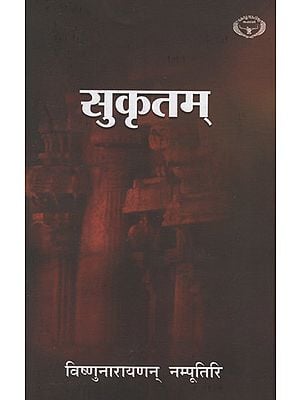 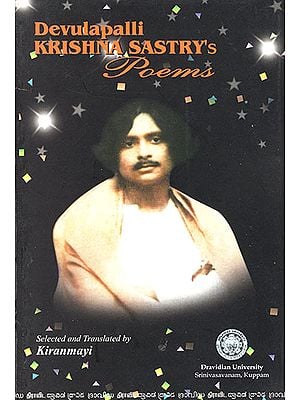 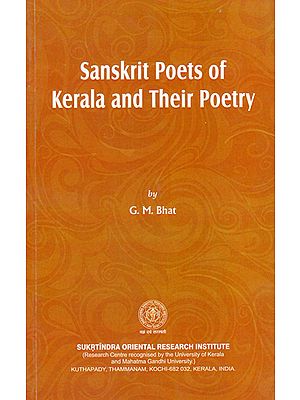 Sanskrit Poets of Kerala and Their Poetry
By G.M. Bhat
$16 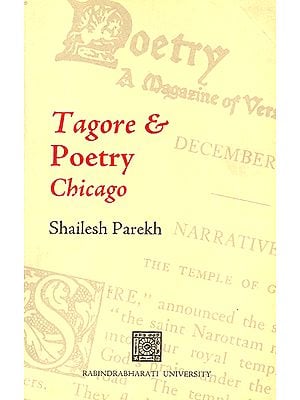 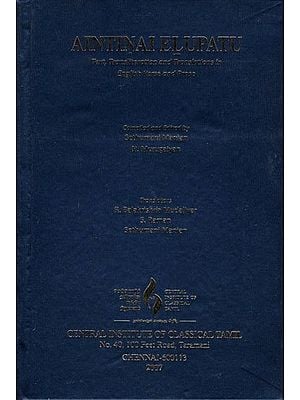 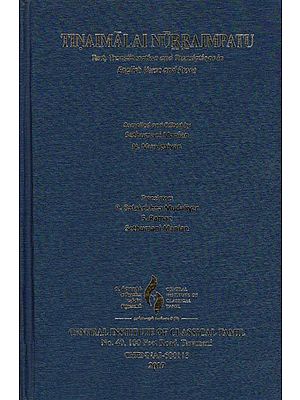