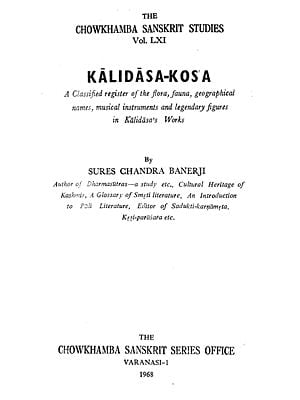 $33
Quantity
Notify me when this item is available

Kalidasa is admittedly the greatest classical poet of India, and one of the greatest in the world. His works have been studied from various stand-points, viz. his similes, the society reflected in his works, the human meaning of his poems and dramas etc. But, no serious and systematic attempt has as yet been made to study the words used by this master-poet. No study of the cultural material, contained in the works of a writer, can be complete without an index verborum to his works. The study of the words is necessary not for this purpose alone. To assess fully the literary value of a work such a study is indispensable. It may be mentioned, in this connexion, that a critical study of Kalidasa’s works has al- ready revealed his penchant for the use of soft words even at the sacrifice of the spirit of what he describes. For instance, in the third canto (verse 72) of the Kumara-sambhava, he says that the fire emanating from the eyes of Bhava burnt Cupid to ashes ( vahnir-bhava-netra-janma bhasmavasesam ma- danam cakara). Here, the word Bhava appears to be too delicate to convey the fierceness of Siva in wrath. Moreover, Siva, in his watery form, is called Bhava; so it appears to be incongruous in this context. Perhaps, Rudra would have been more befitting to the context; butt his word probably sounded harsh to the ears of the poet. Again, in Kalidasa’s description of the Himalayas, in the same epic, there is not a single word that may conjure up the vision of the rugged aspect of such a mighty mountain. This predilection for soft words has subjected him to the criticism that he is finical, and is in- capable of using harsh-sounding words even when the subject- matter or the context demands them.

The study of the words, used by a writer, has other uses too. It is not un-often that the use of a certain word throws light on the chronological position of the writer concerned.

The part played by the words ‘dindra’, ‘bhattdraka-vara’ etc. in settling some chronological problems relating to Sanskrit literature is well known, The geographical names, occurring in a work, sometimes throw light on the topography of a country. In cases where absolute chronology is impossible, names of works or authors, occurring in a particular treatise, serve as an index to the relative chronology of its writer. We cannot now conceive of studies on the Vedic India without the Vedic Index or on the India of the classical age without word-indexes to the Astadhyayi of Panini and the Mahabhasya of Patanjali.

Thus, from all points of view, an index verborum to the works of Kalidasa is a great desideratum. This requires patient work for a long time and a volume of considerable dimensions. Our object in this modest work is to compile a classified register of the words, used by Kalidasa, under the following heads only -

Under flora we have left out the names of such mythical trees and flowers as Santanaka, Parijata etc. Under fauna the masculine forms of the names of beasts and birds have been used; e.g. mrga for mrgi, kokila for kokila, etc. Com- pound words, whenever necessary, have been split up so as to separate the names of flowers or animals as the case may be. For example, from the compounds mukhambhoja and mrga-nayana the words ambhoja and mrga only have been taken separately. The botanical, ornithological and zoological names of the trees and flowers, birds and beasts respectively have been, as far as practicable, given under the words concerned.

So far as the names of places, rivers, mountains etc. are concerned, we have tried to note under them the corresponding modern names wherever possible.

With regard to musical instruments, of which only a few have been mentioned by Kalidasa, their use, as far as indicated in his works, has been laid down.

Coming to the portion of our work dealing with references to mythological and legendary figures, it should be observed that these references will show Kalidasa’s familiarity with the particular legends and stories. This portion may be of some interest to the student of Indian myths and legends, and may, in course of time, shed some light on the difficult question of the age of the master-poet of India. In this section, some references relate to historical persons or races. So far as the names of various gods and different persons are concerned, we have given, besides the names, also the well-known appellations by which they are commonly known. For example, besides Siva, we have noted his appellations Tryambaka, Pinadkapani, Pasupati, Smara-s4sana and soon; this will indicate the facets of Siva’s personality that were referred to by Kalidasa. In the section on legendary and mythical figures, we have noted the information given by Kalidasa himself.

In the absence of such information, we have given what the commentators tell us. Where neither the text nor the commentary affords any clue or the information available there- from is extremely meagre, we have laid down the salient points known from other sources. 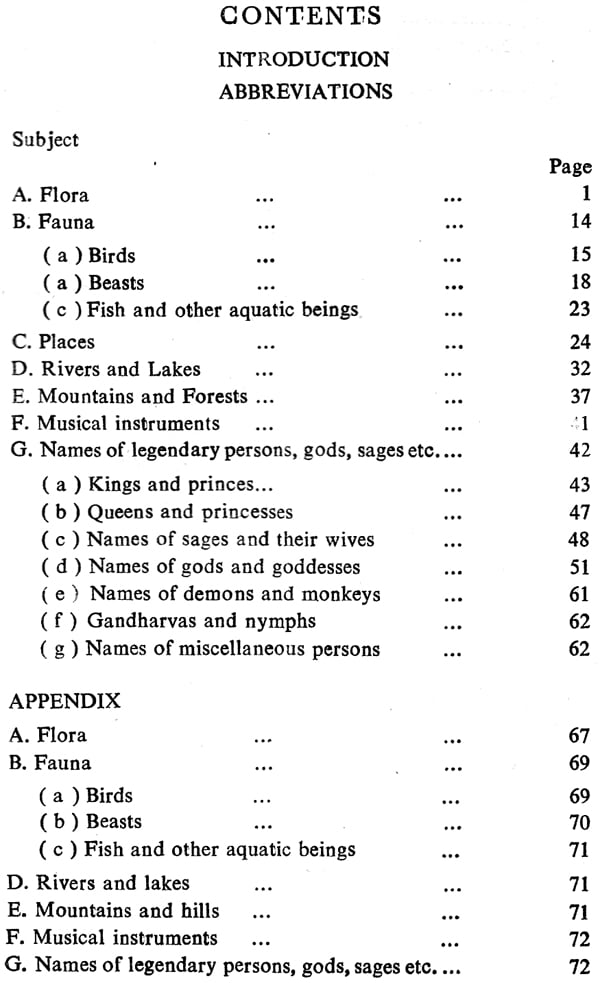 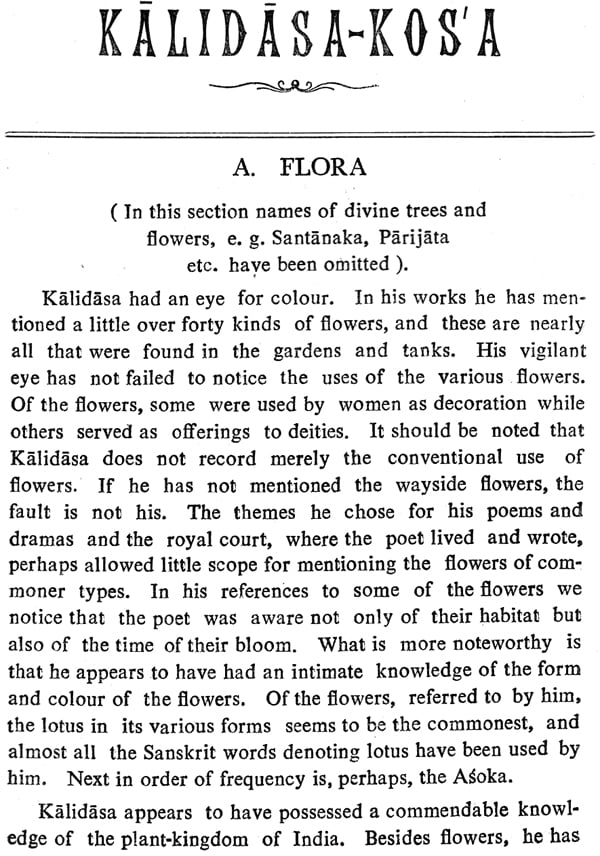 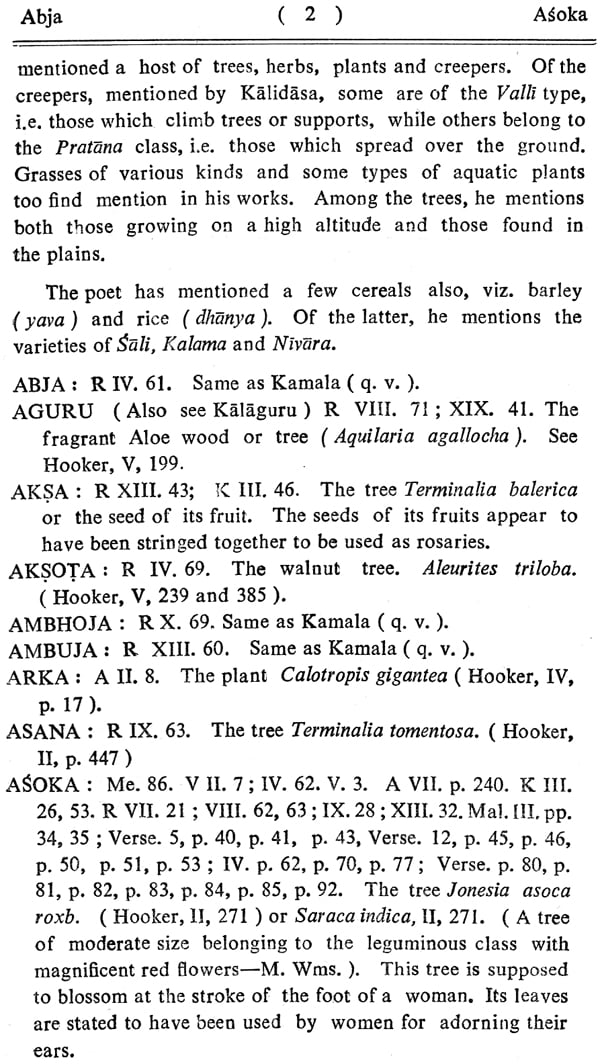 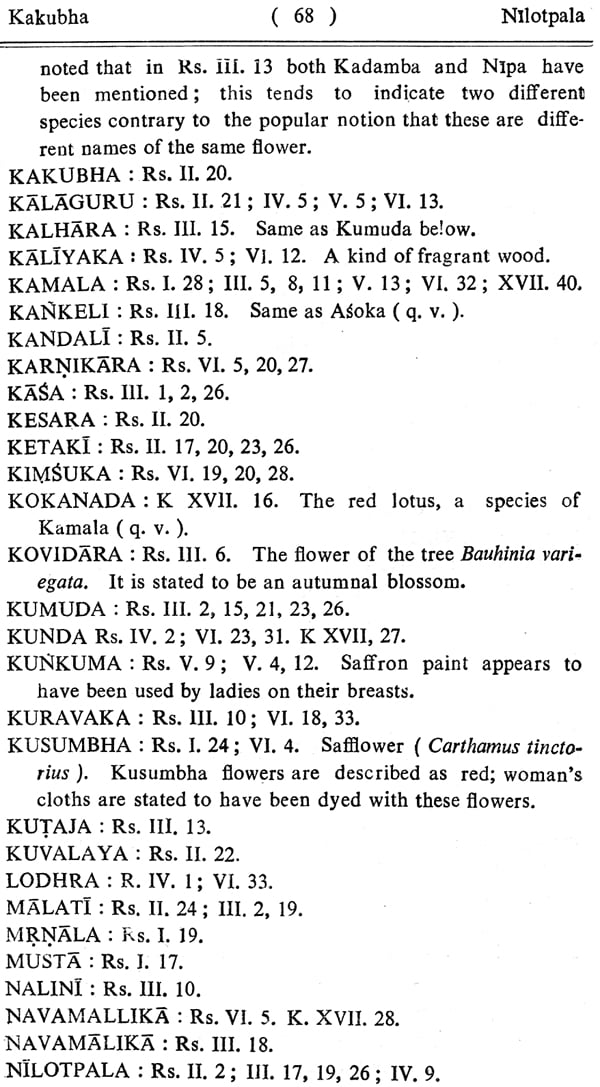 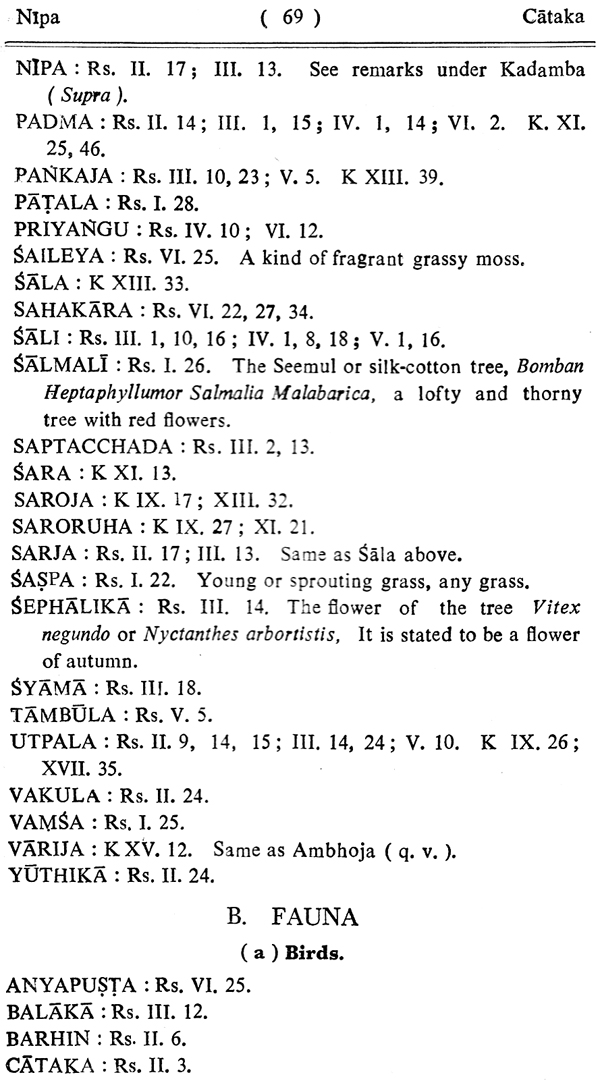 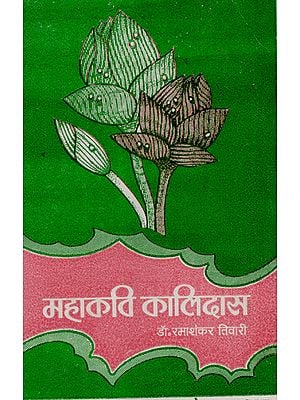 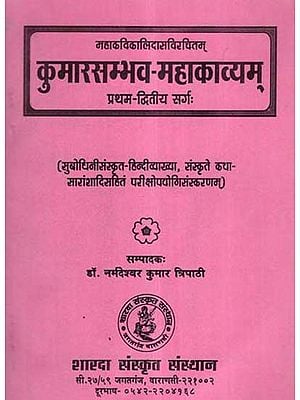 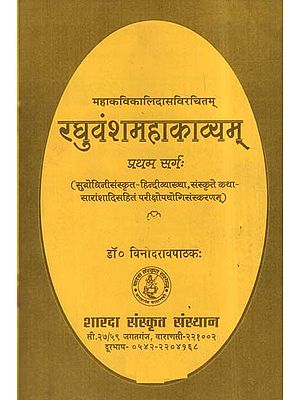 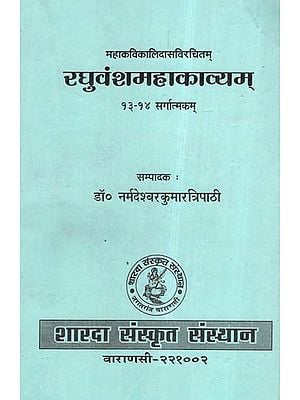 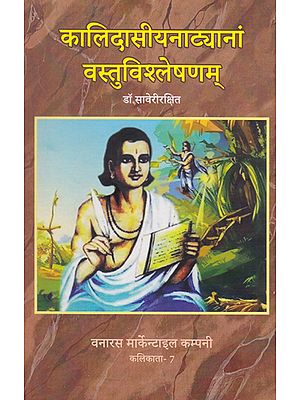 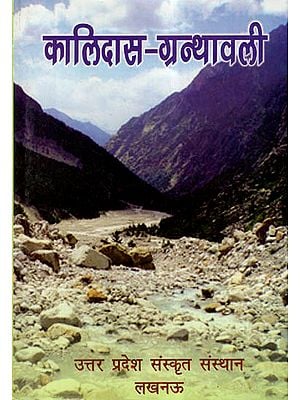 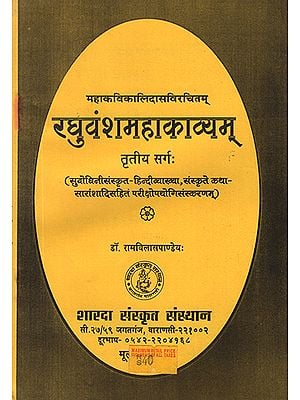 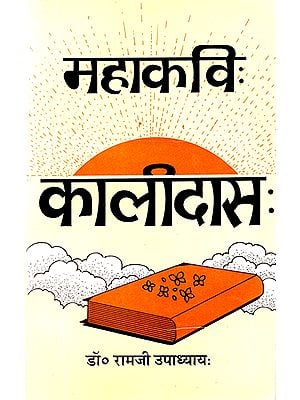 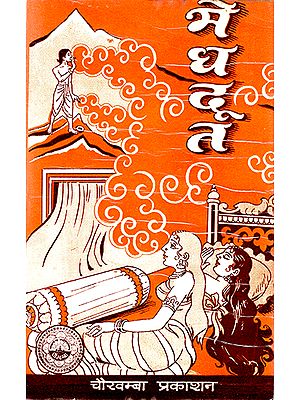 मेघदूत: Meghaduta of Kalidasa (An Old and Rare Book)
By Sudhakara Mishra
$17 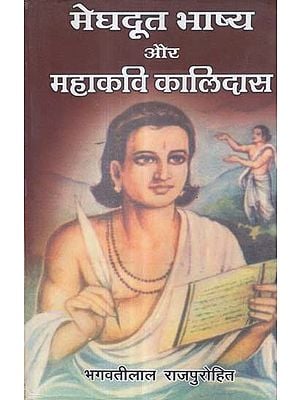 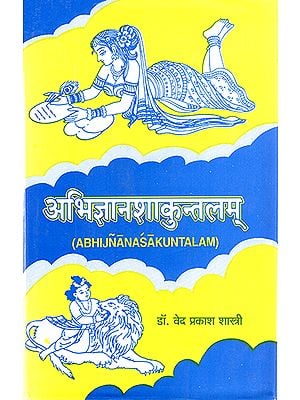 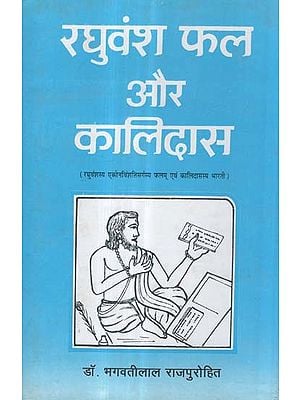 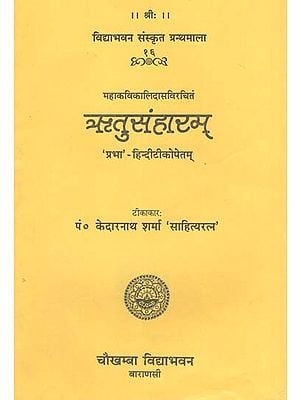 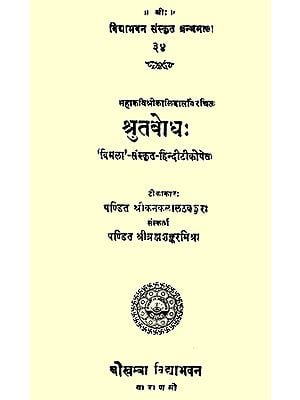