The Indus Saga: From Pataliputra to Partition 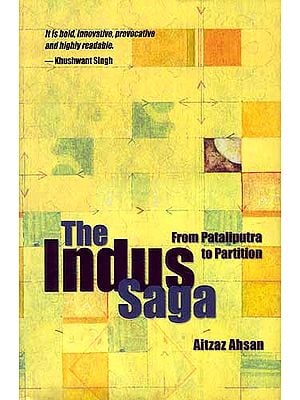 $32.50
Notify me when this item is available
Save to Wishlist Send as E-card Share by Email
From the Jacket:

The Indus region, comprising the northwestern part of the Indian subcontinent (now Pakistan), has always had its distinct identity - racially, ethnically, linguistically and culturally. In the last five thousand years this region has been a part of India politically for only five hundred years.

Pakistan, then, is no 'artificial' state conjured up by the disaffected Muslim elite of British India. Aitzaz Ahsan surveys the history of Indus-as he refers to this region-right from the time of the Harappan civilization to the era of the British Raj, concluding with Independence and the creation of Pakistan.

Ahsan's message is aimed both at Indians still nostalgic about 'undivided' India and at his Pakistani compatriots who narrowly tend to define their identity by their 'un-Indianness'.

Aitzaz Ahsan comes from a background steeped in politics, being the third generation from his family to serve as an elected member of a legislative assembly. He is a member of the Pakistan Peoples Party and has served as the minister of law, justice, interior and education in the federal government between 1988 and 1993. elected to the senate of Pakistan in 1994, he was, successively, the leader of the House and the leader of the Opposition between the years 1996 and 1999.

After his early education at Aitchison College and the Government College in Lahore, he studied law at Cambridge and was called to the bar at Grays' Inn in 1967. he is a senior advocate in the Supreme Court of Pakistan. He is also an indefatigable human rights activist and a founder vice-president of the Human Rights Commission of Pakistan. He has been incarcerated under arbitrary detention laws many times by military and authoritarian regimes. During one such prolonged detention, he wrote the Indus Saga.

'Two generations of Pakistanis have been told that their very identity was their "un-Indianness": banish this thought from the mind and Pakistan will collapse. Moreover, the Pakistani is Muslim and the Indian is Hindu. Period. That alone was the rationale of the partition of the subcontinent. But even if valid, being "un-Indian" is a manifestly incomplete answer to any question about identity. It only purports to state what the Pakistani is not. It does not address the issue as to what indeed he is The Pakistani does not necessarily have to be an Indian, but he has to be somebody. Who is that somebody? Moreover the smug answer ascribing a singular role in the Partition to the differences between Hindus and Muslims fails to deal with the fact that the number of Muslims in India is greater than the population of Pakistan

That is why some questions remain: is the centripetal pull of India an inexorable force that could again pull the Indus region(Pakistan) to itself? Or does the Indus region have a primordial existence outside India? Does it not have an identity of its own'