This volume is collection of eight lectures delivered by Dr Kapila Vatsyayan on different occasions, some in the memory of four eminent persons such as Ancharlott Eschmann, an art historian; Dr C.D. Deshmukh, founder of the India International Centre and former Chairman, University Grants Commission; Prof. Birendra Kumar Bhattacharyya, eminent writer social worker and former president of the Sahitya Akademi and Dr D.S. Kothari, the doyen of science and a dedicated Gandhian, and the remaining four on a few critical issues related to culture.

These lectures delve upon crucial terms and topics like sastra and prayoga, and marga and desi in the study of Indian arts, other social systems and the sociology of religion; interface of culture and development; role of arts in social transformation; a modern rsi, the eco-cultural cartography of South Asia; the oral and written systems of knowledge transmission; the different aspects of India's cultural heritage and identity; and Hinduism as a religion of divine immanence, where concepts like purusarthas and varnasrama-dharma are all part and parcel of the all-encompassing Sanatana Dharma.

This book thus enables readers to enlarge and nurture India's cultural heritage and its allied features. In a fast-changing world, one should know his cultural past and thereby prepare himself to absorb what is needed, without losing his identity and existence.

Kapila Vatsyayan, Chairperson, IIC- International Research Division, India International Centre, New Delhi, and a former Member of Parliament (Rajya Sabha), is a well-known and leading scholar of interrelatedness of the arts. She was the founder-director of the Indira Gandhi National Centre for the Arts in Delhi, and has been Secretary, Government of India in the Department of Arts and Culture, where she was involved in framing policies with regard to many institutions of higher education and culture in India. She has also been the President, India International Centre; and Member, UNESCO Executive Board. She is the author of over thirty books, including Classical Indian Dance in Literature and the Arts (1968), The Square and the Circle of Indian Arts (1983), and a series of monographs on the Gita Govinda. She has conceived and organized conferences and exhibitions covering a range of concerns in Indian art, education and culture, and is the editor and general editor of several publications. In 2011, she was honoured with the "Padma Vibhushan" by the Government of India.

Although over these few decades my concern has been on art history, the literary, the plastic, the performing arts and the broad field of cultural heritage, I have also been concerned with education in its widest connotations. Also, there has been a concern about fundamental terms which are pervasive in many disciplines in India. As it happens, one is invited to deliver lectures on different occasions and sometimes in the memory of eminent people. The lectures in this volume are a collection, delivered in the memory of a variety of people ranging from Ancharlott Eschmann, an art historian, to the eminent Dr C.D. Deshmukh, founder of the India International Centre (IIC) and former Chairman, University Grants Commission (UGC), Prof. Birendra Kumar Bhattacharyya, eminent writer and social worker, Dr D.S. Kothari, the doyen of science but equally dedicated to Gandhian thoughts. Besides, there has been a concern on the phenomenon of pluralism and diversity in South Asia. Also, there has been concern on the interplay of the oral and written word in the cultures of India and Asia.

The volume comprises of the text of eight lectures. The first text "Sastra and Prayoga" is the Ancharlott Eschmann Memorial Lecture delivered on 24 September 1978 at Bhubaneshwar. The text talks about Ancharlott Eschmann, a talented young scholar, very lively and vivacious, and a person of great human warmth. Eschmann (1941-77), through her writings, could stimulate my thinking and had drawn our attention to the fact that there was a vast difference between Indian and Western understanding of the meaning of some important philosophical terms. The text of this lecture deals with two pairs of crucial terms sastra and prayoga, and marga and desi that are relevant not only in the study of Indian arts but for the study of many other social system and to the sociology of religion. The exposition on these can be demonstrated through the empirical data which regions like Manipur, Orissa and Kerala provide where different levels of artistic manifestations as also religious practices can be seen in their living continuities.

Next is the "The Interface of Culture and Development", a text of the memorial lecture on Dr Birendra Kumar Bhattacharyya, delivered on 6 August 2002 at Guwahati. Dr Birendra Kumar Bhattacharyya was both a dedicated social reformer and activist who wished to reform society with an imagination and sensitivity of a creative writer. He was a recipient of jnanpeeth Award for his remarkable contribution to Assamese literature as also to Indian literature.

"The Role of the Arts in Social Transformation" is the text of Eighth Dr C.D. Deshmukh Memorial Lecture delivered at the India International Centre, New Delhi on 14January 1991. It reflects on the personality of Dr C.D. Deshmukh and emphasizes his contribution to the study of science and religion. He was an educationist, teacher and learner and was known for his ability to understand things quickly and make accurate judgment as an economist and administrator. It refers to the need to rearticulate or reassert the role of creativity in reshaping of human kind or societies, bringing about change or transformation. Arts and creativity is the safety valve of the society. One cannot think of a world without the historical past or the contemporary activities.

"Dr D.S. Kothari: A Modern Rsi" is the text of the Ninth Dr D.S. Kothari Memorial Lecture, delivered under the auspices of Shantipeeth India, Udaipur and IIC on 30 March 2012. It explores the multidimensional personality of a modern rsi of our time. He was a seer of nature and wisdom. My association with him on different planes gave me enough opportunity to be acquainted with his wisdom, intelligence and charisma. This lecture will familiarize the readers with his contributions to the society, and his visions and missions, not only in his capacity as Chairman, UGC, but also to many other institutions.

The text of the lecture on "pluralism and Diversity in South Asia - Eco-cultural Cartography of South Asia" situates itself within South Asia's emerging role in the world and the three themes of democracy, development and environment. Here the endeavour is to draw an eco-cultural cartography of the countries of South Asia. Distinct from political boundaries, these can be seen in terms of cultural zones.

In the lecture "Oral and Written Word: Opposites or Complementary", two systems of knowledge transmissions are addressed. The word spoken is a special faculty of humans. All civilizations have recognized the fundamental importance of this faculty. India is well known for its oral tradition, especially in the transmission of Vedic wisdom, and we still experience its echoes in certain performing art forms like Kutiyattam and Kathakali. Here attention is drawn to a unique methodology or epistemology of retaining words and transmitting the word orally through a very complex system of transmission, i.e. the Vedic Siksa. This pedagogy of education has continued for centuries even in the field of arts, especially in performing arts. The covenant between the master and the pupil was sacred through the articulated sound or word, and the tradition still continues.

Another thought that is explored here is whether for a culture to flourish, is there the need for a written language as many Western scholars believe? Not necessarily. Many tribal societies have awesome culture, without them having known to reading and writing.

"India's cultural Heritage and Identity" is an overview of different aspects of our cultural heritage and identity. Cultural heritage and identity are neither fixed nor frozen categories. They are fluid categories capable of transformation and change. Identity is multilayered, comprising many levels and dimensions. One principal indicator of the multilayered identity is language. India is a multilingual country and most Indians talk two or more languages. No political state is monolingual. Though it was a cause for many socio-political tensions, it provides avenue for cultural mixing.

The concluding chapter "Hinduism: The Religion of Divine Immanence" makes an attempt to define Hinduism, though in an incomplete manner. In totality it contains all spiritual perceptions and articulations in one term, Sanatana Dharma or the perennial and eternal dharma. Often many scholars, interpreters and practitioners of Hinduism have identified one or the other source or a particular stream and have called it Hinduism. Such interpretations occasionally become exclusive, not inclusive. In this chapter, an attempt has been made to identify some of the salient enduring features of all that we understand by the term Hinduism as a world view, a philosophy, a way of life and a cluster or moral principles which guide conduct and action. Our emphasis is on certain key principles which run through the textual and oral traditions of the country. For example, "Truth is one but the wise call it by many names". Their validation comes from Vedas, Upanisads, numerous religious texts, and the Great Indian epics. Concepts like purusarthas and varnasrama-dharma are all part and parcel of the all-encompassing Sanatana Dharma.

I hope these articles, some already published elsewhere and some fresh, will help the readers to enlarge the understanding and nurture India's cultural heritage and its allied features. In a world of fast- changing mores and lifestyle, it is important to know our cultural past and thereby prepare ourselves to absorb what is just needed for us, without losing our identity and existence. 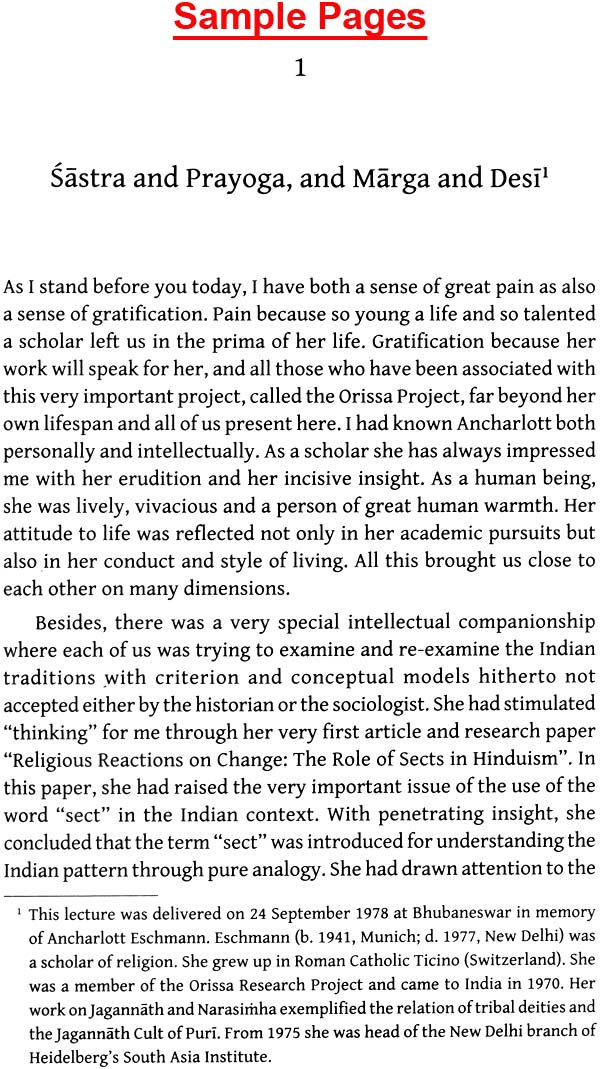 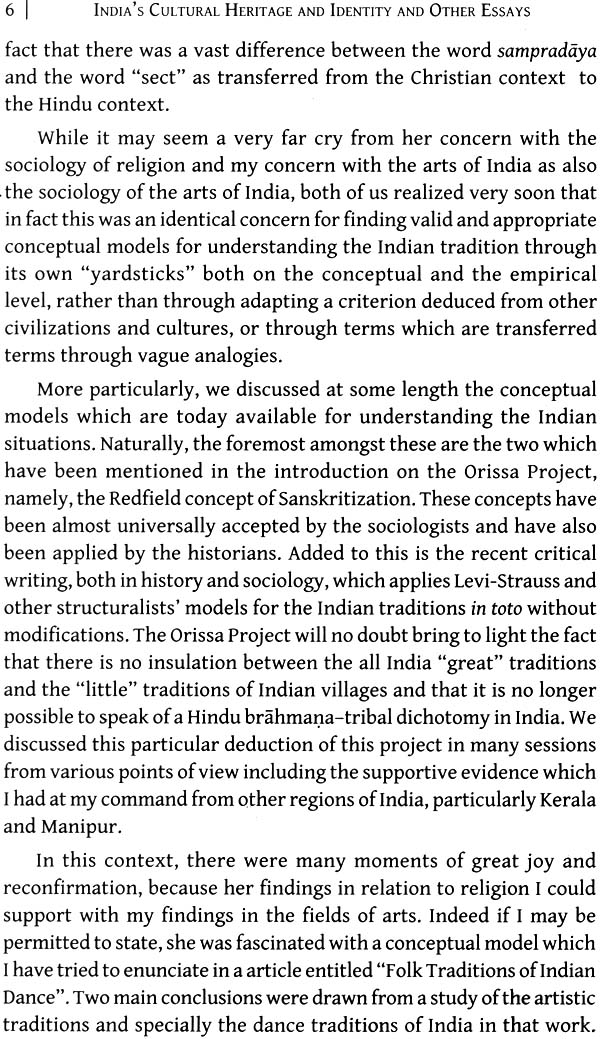 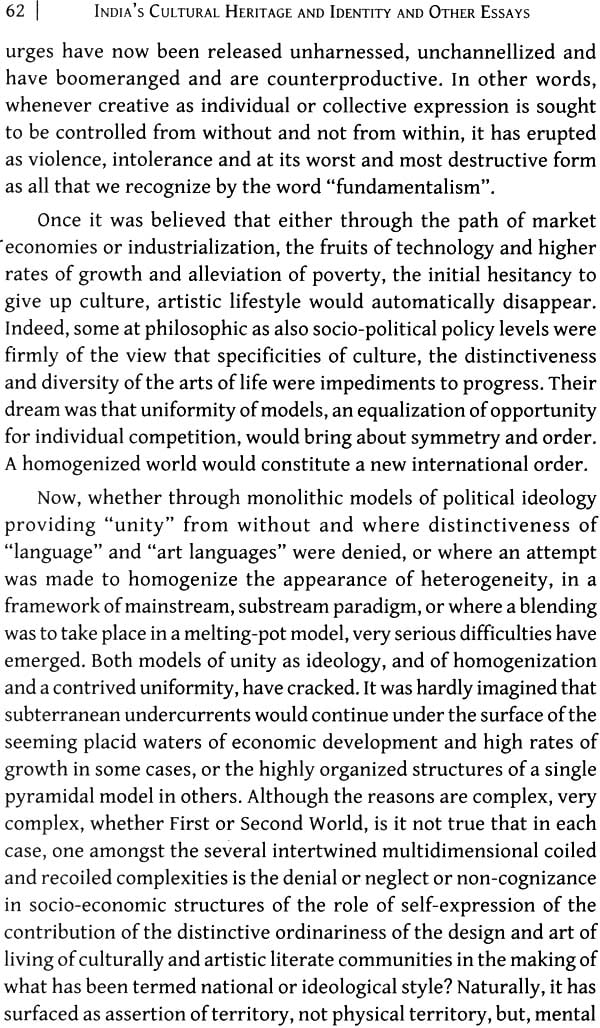 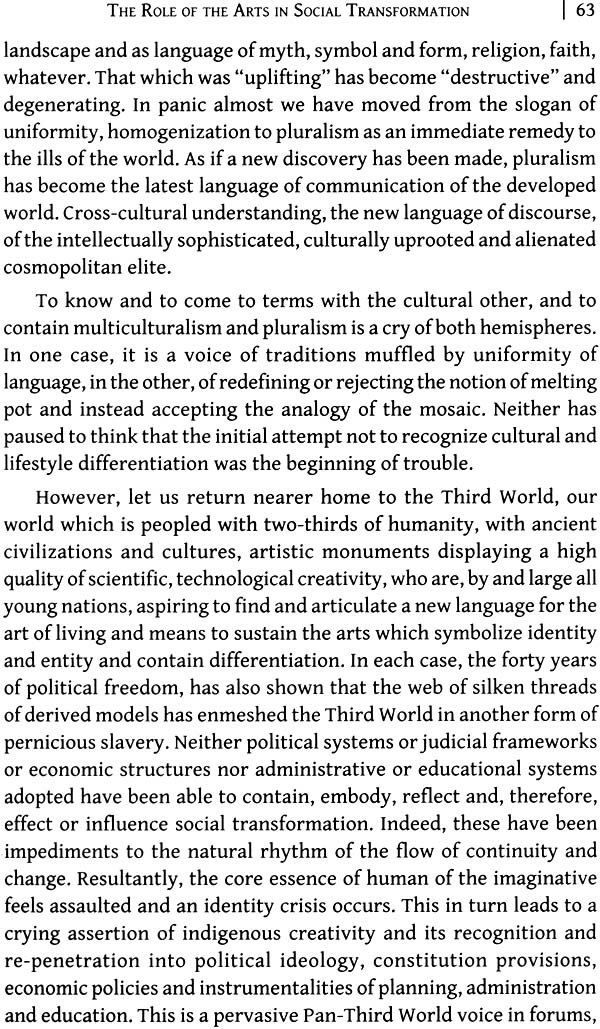 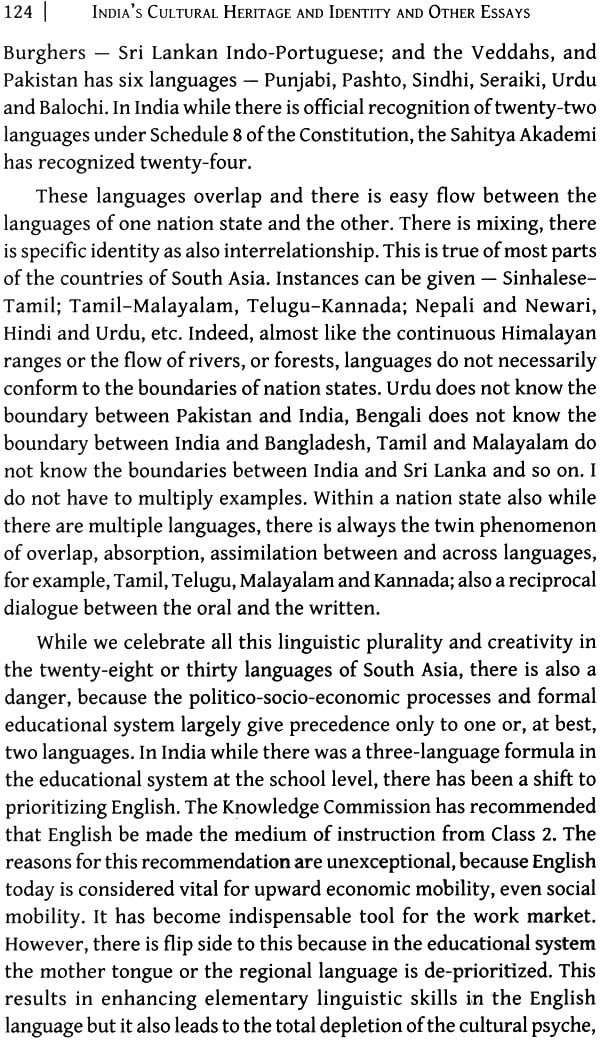 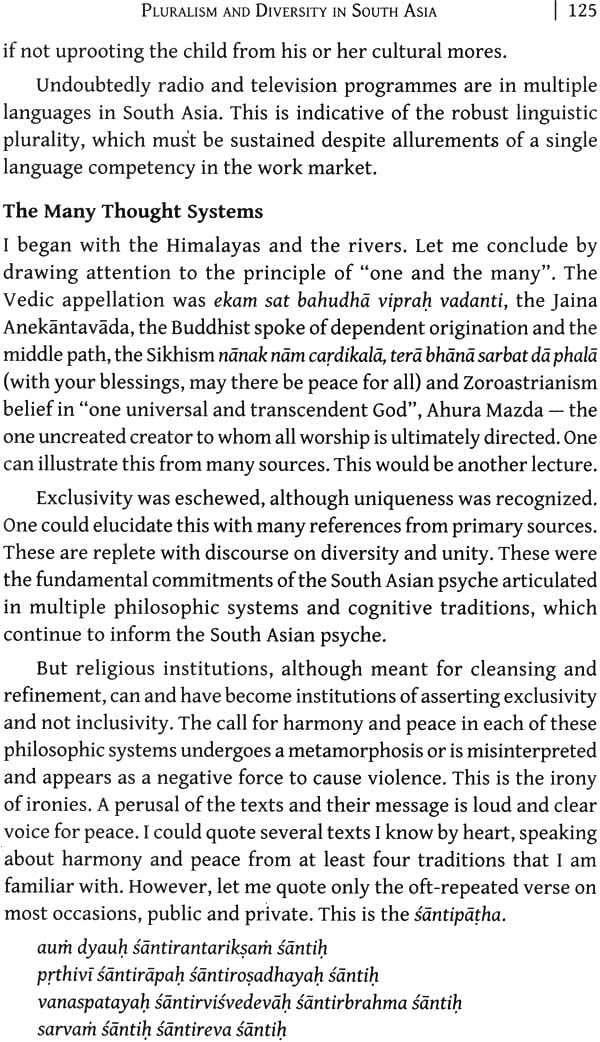 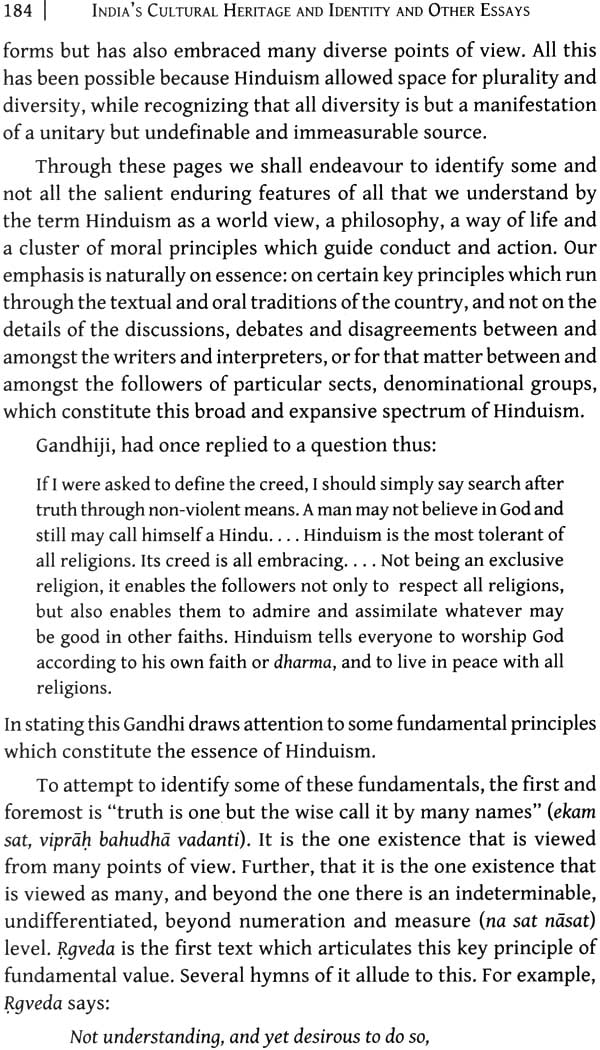 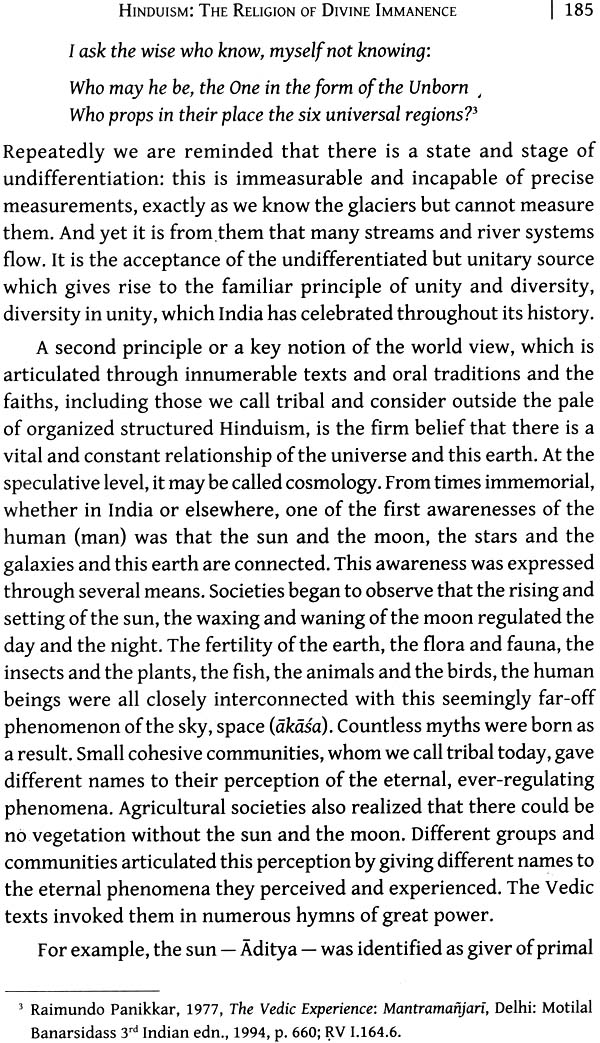 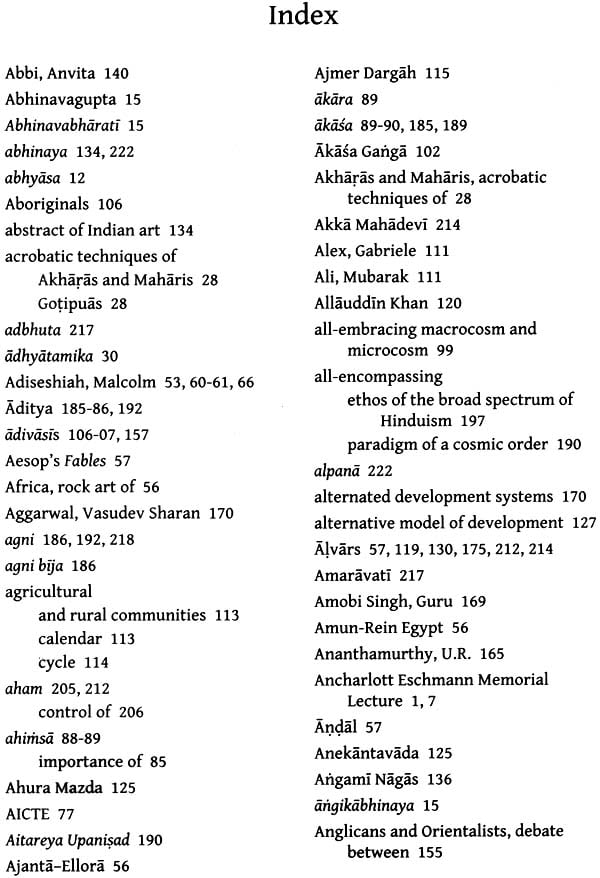 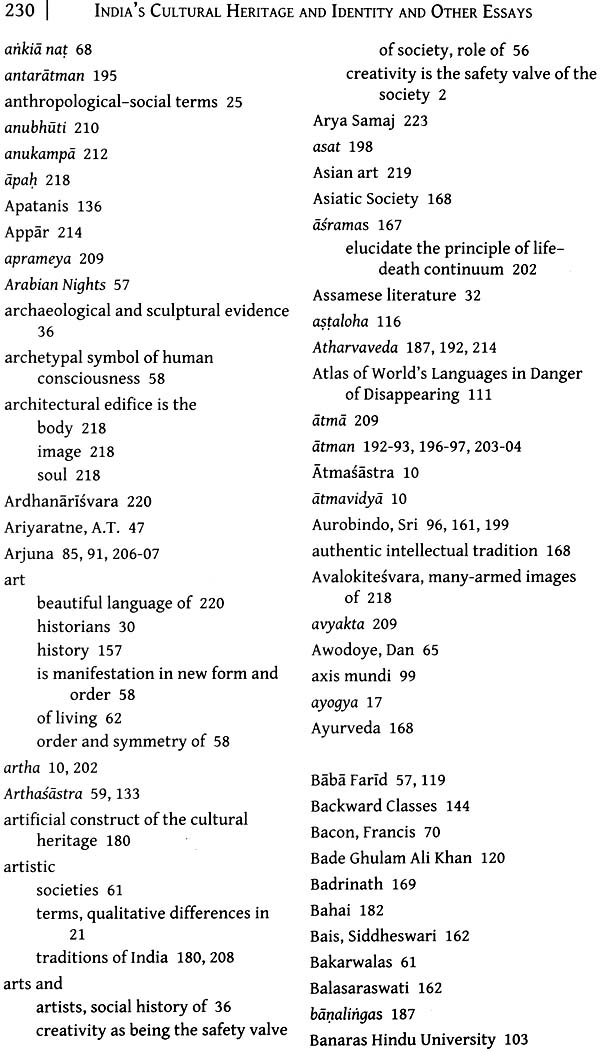 Lucknow: The City of Heritage and Culture (A Walk Through History)
By Vipul B. Varshney and Ajaish Jaiswa
$105
FREE Delivery