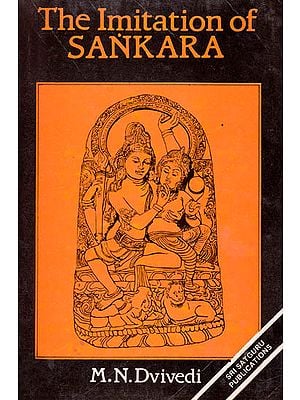 The present collection here is not entirely from the works of Sankara, but from all works bearing on the Philosophy taught by Sankara and his followers. The whole collection is being divided into sections and sub-sections with a view to exhaust the main topics of the Absolute Philosophy. Texts from the Upanisads and other works are often referred to in Vedanta writings. That almost every important reference of this kind may easily be traced to its place in this collection, where it should be found in its entirety with translation, a careful Alphabetical Index puts together the principal points of this philosophy, and directs even the most causal reader to whatever information this book can give on the questions and its bearings. Words not Englished in the text have been collected together for explanation in an Index, to which the reader may conveniently refer.

“In the whole world there is no. study so beneficial and as elevating as that of the Upanishads. It has been the solace of my life; it will be die solace of my death.” These words of the German sage were cheerfully endorsed. Only last year, by a living scholar and thinker considerable repute and authority. The Philosophy of the Upanishads scarcely needs recommendation. Philosophers from Plato to Schopenhauer are unanimous iii their testimony to the elevating, alleviating, influence of the Vedanta. An Age of Positive Science alone requires to be put HI mind of these expressions.

It has been the ambition of my heart, from the firsthand experience F have had of the truth of these remarks, to present the main Idea of this sublime universal Philosophy of the Absolute ‘ in as simple and popular a form as the nature of the subject would permit. The deservedly popular book of Thomas—a—Kempis, ‘The Imitation of Christ,’ fascinated my attention; alit1 i3owdon’s ‘Imitation of Buddha’ suggested the plan of this work. There was the same mighty spirit breathing in the child of Galilee, the prince of Kapilavastu, and this Brahmana of Southern India. He has as much right imitation ‘as the other seers of antiquity: the need for an ‘Imitation ii Sankara ‘is perhaps greatest in the present day.

I am not unconscious of the defects of my performance. It lacks the simplicity of Kempis. The nature of the subject is my only excuse and if the book gives plain serious, matter for thought, at first sight. J should consider small satisfaction. Then again the detached nature of the information is another difficulty in the way- Loss of context might occasionally tend to obscure the sense of a passage. I have. However, tried to remedy this defect by stringing the pieces together in a kind of fictions cc context from end to end. Many of the passages could have been given in much better Language, for several of them have been translated before by abler hands: but I have my reasons for attempting fresh translation. Where commentaries have been available, I have carefully consulted them, and, by giving a free rendering of every text, I have done my best to combine the spirit of the context. and the strength of the commentary in my translation. Among commentaries those of Sankara have always had the preference. ii one more respect, does his work differ from that of Keep is or rather that of Bowdon. The collection here is not entirely from the works of Sankara, but from all works bearing on the Philosophy taught by Sankara and his followers.

I have divided the whole collection into sections and sub—section with a view to exhaust the main topics of the Absolute Philosophy. Texts Iron the Upanisads and other works are often referred to in Vedanta-writings. That almost every important reference of this kind may easily be tried to its place in this collection, where it should be found in its entirety with translation, a careful Alphabetical Index has been appended at the end. Another Index puts together the principal points of tins Philosophy, and directs even the most casual reader to whatever information this book can give on the question awl its bearings. Words not Englished in the text have been collected together for explanation in an index, to which the reader may conveniently refer.

With the chapter of genesis thus finished, we may take closer view of the child that sees the light. Many a reader would, however, be curious to hear something of the godfather of this infant. A few words can satisfy the curiosity, for, it is matter of secondary consequence in a work 0f this kind to concern ourselves with the yet disputed question of the history of Sankara. We are here concerned with the mighty split underlying the shell bearing that name, with the awakening, enchanting music of the harmony through which it relates itself to posterity and time. It is not certain when Sankara lived; some place him after, some before Christ. He was a Brahmana, native of some obscure town on the coast of Malabar. He is reported to be an incarnation of god Siva. He found the Light while yet eight years of age, and, with the permission of his fond mother, lie renounced the world and became a Sannyasin. Through Renunciation he transferred the sphere of his activity from the narrow limits of his simple homestead to the wide expanse of interesting humanity and the world. He solved the national problem of the day through his Philosophy which exercised a powerful, potent charm over the mind of India. The victorious termination of his universal philosophic war made him the one Acharya, the one master-philosopher of the land. He founded four mighty ‘seats of learning (Mathas)’ in the four corners of India. These are extant to the present day. The body which encaged this mighty spirit was dissolved at the early age of thirty-two.

He has composed several works in poetry and prose, the latter all commentaries. Fascinating, weird music; lucid, chaste, powerful, balanced expression; universal, unsectarian, fearless, loving exposition;—these are some of the characteristics of his varied literary style. lie was a real master of the Philosophy he preached ; lie can express it in half a Years, or a quarto volume of many hundred pages. He would readily break a lance with any adversary, atheist, materialist ritnalist, magician, ascetic, Yogi, or Tantric. His writings largely reflect the spirit of the age he lived in; but the magic of the master whose wand can weld all difference into the homogeneous unity of his spell is unmistakable throughout. The glory of his literary activity is his gloss on the Upani4kads, the Bhagavad-Gita and the 4rahrna-s’ttras, to say nothing of the numerous poems, large anti small, which survive on the lip of many a follower of the Vedantic to the present day. The permanent charm of his name lives undoubtedly in the Absolute Philosophy he taught then and for ever to India and the world at large. These, divested of the stirring and the miraculous which inseparably gather round the life of every great spiritual teacher, are the bare facts of the history of the greatest philosopher the world has eve r seen. 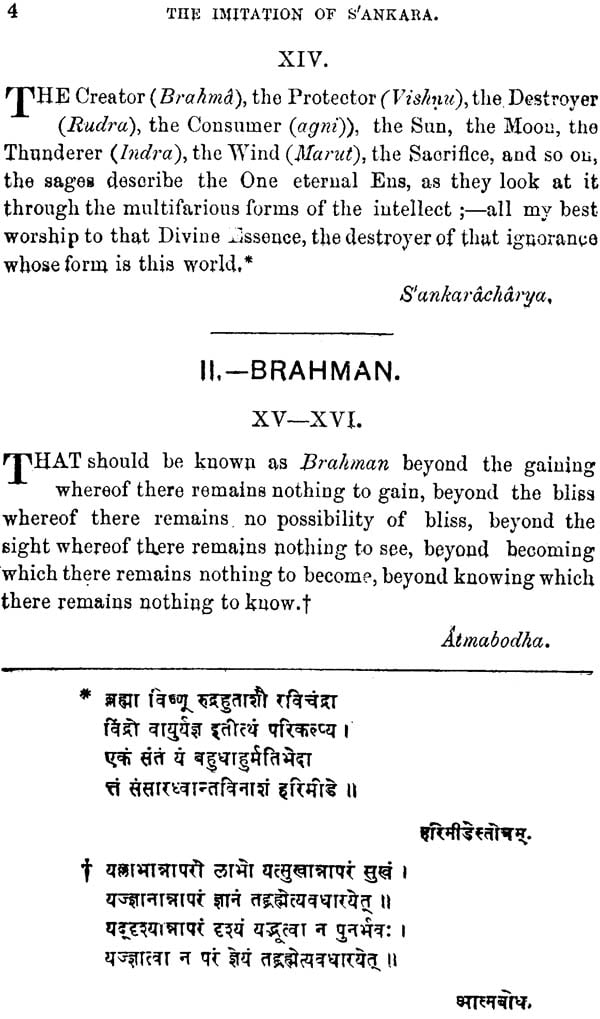 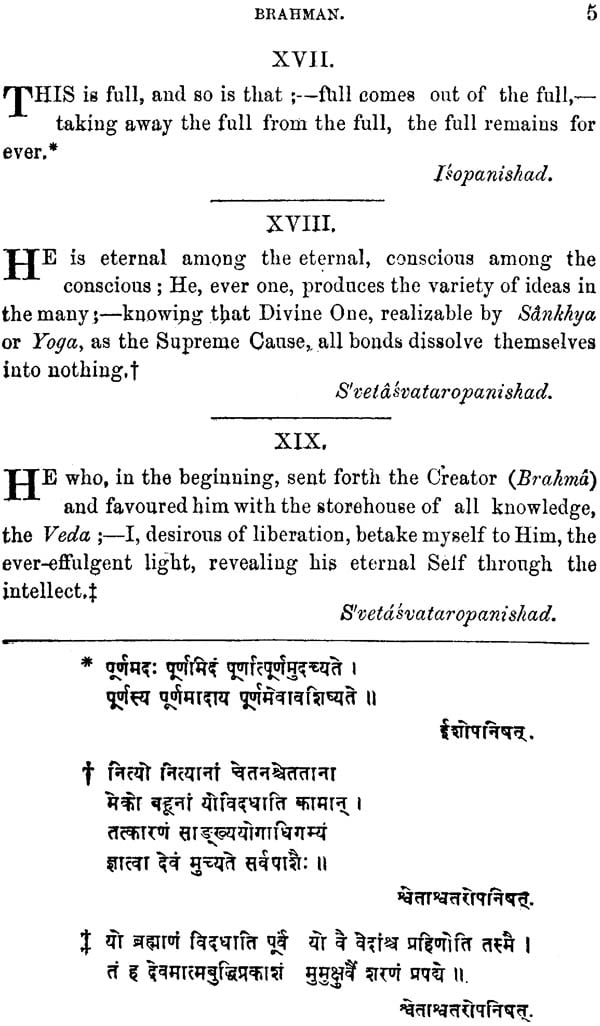 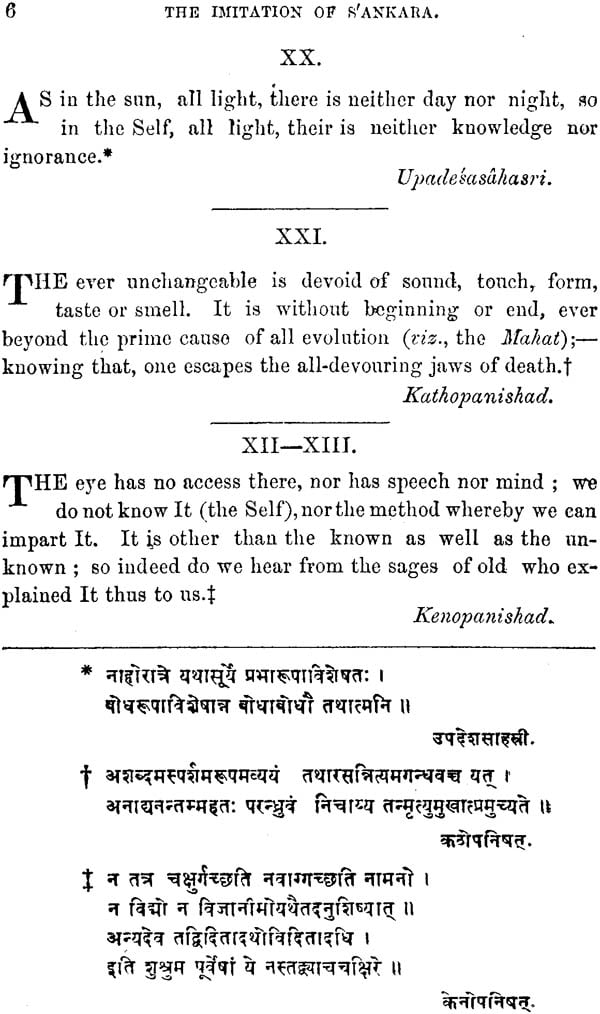 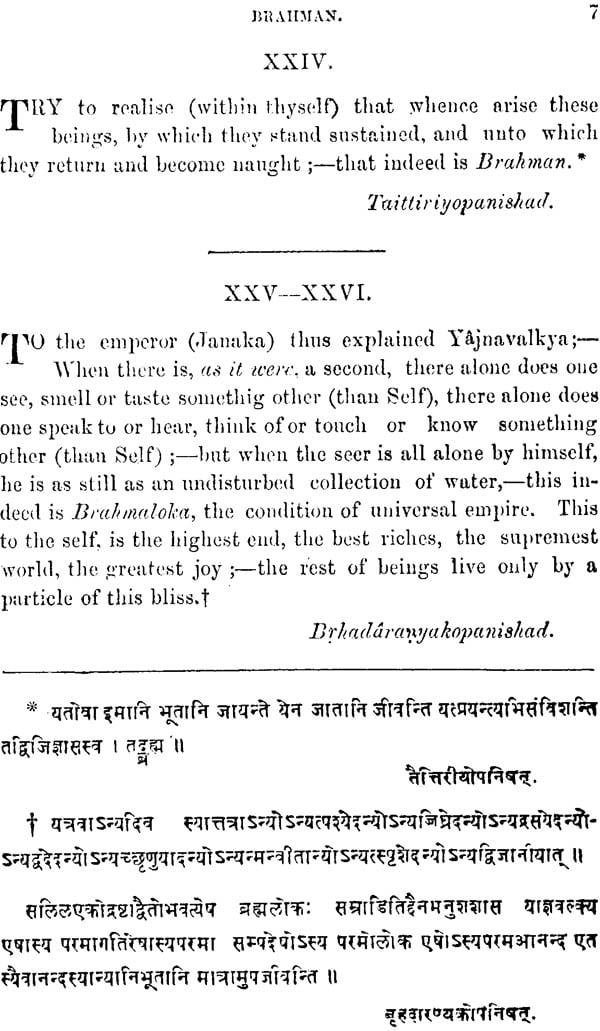 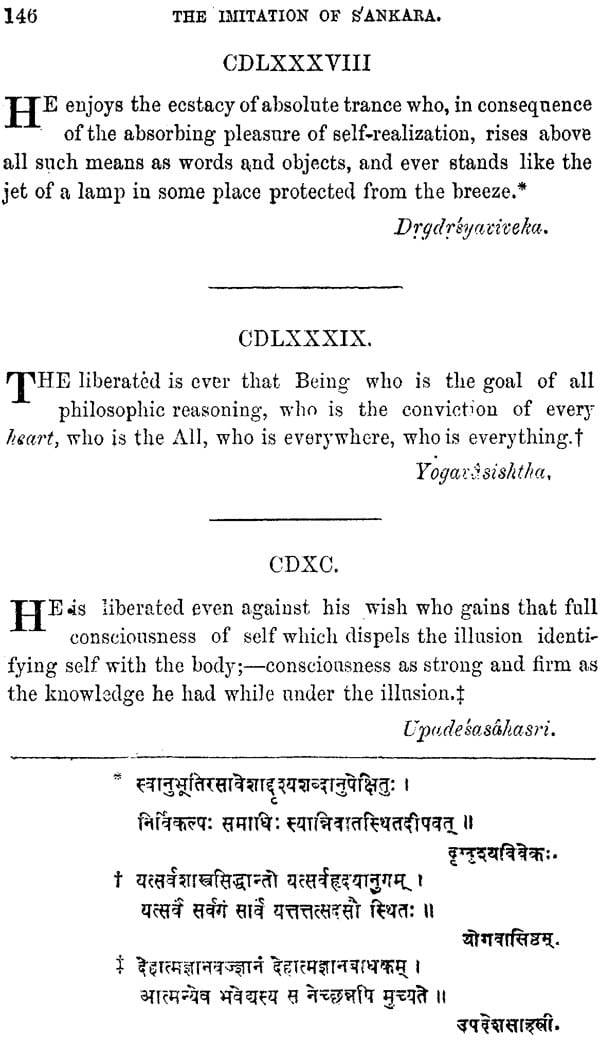 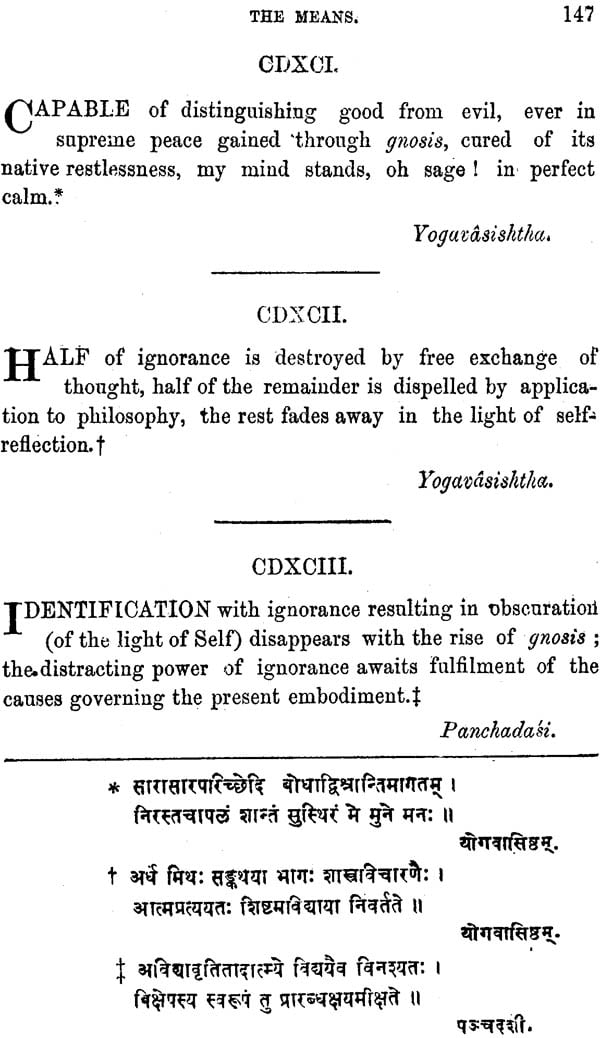 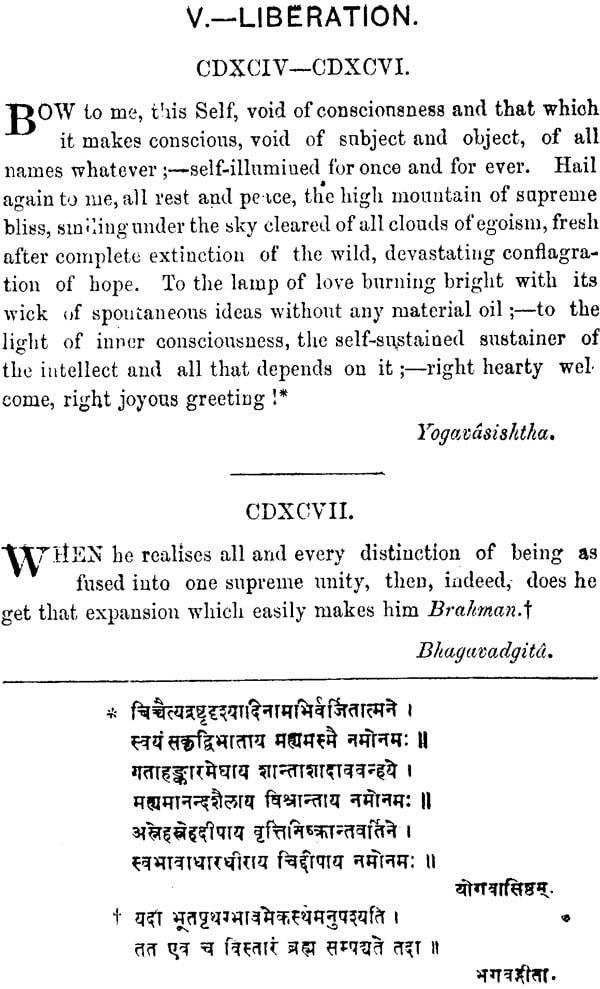 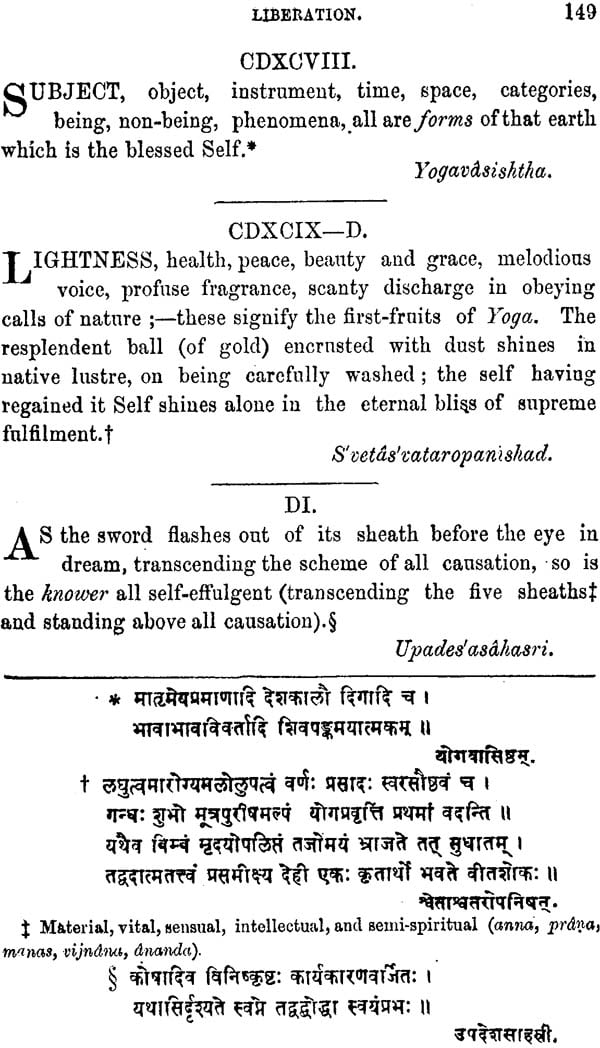 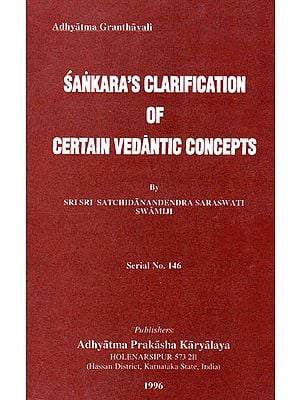 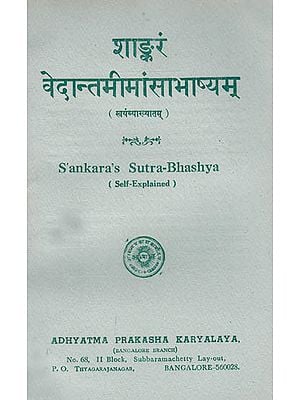 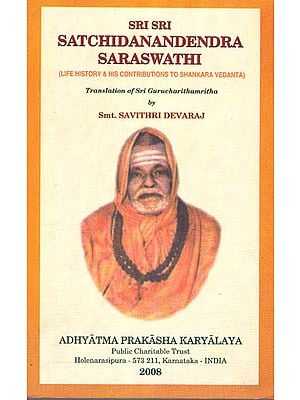 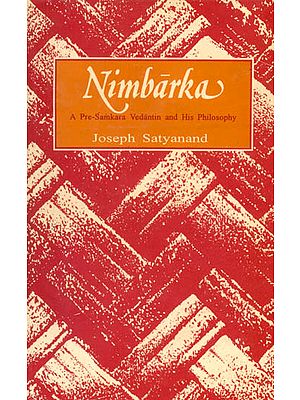 Nimbarka (A Pre-Samkara Vedantin and His Philosophy): (An Old and Rare Book)
By Joseph Satyanand
$30
FREE Delivery 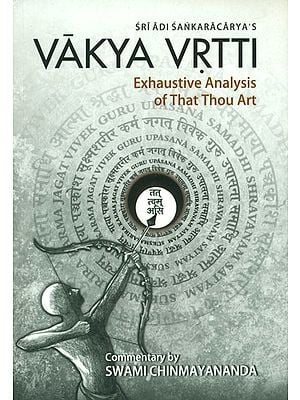