How to be a Yogi

This book forwards the laws and principles as well as methods of Yoga-practice, based on the teachings of Patanjali.

Swami Abhedananda was a practical Yogi, and he got teachings and inspiration on Yoga from his beloved Master, Sri Ramakrishna Paramahansa. The Swami has, therefore, dealt with the subject on Yoga from his personal experience, and has disclosed its methods and truth with the most scientific and rational explanation. His writing on 'Was Christ a Yogi' is a very interesting and historical one.

Swami Abhedananda, an apostle of Sri Ramakrishna-Born October 2, 1866-Spent his early life among the brotherhood in Baranagar monastery near Calcutta in severe austerity-Travelled barefooted all over India from 1888-1895 - Acquainted with many distinguished savants, including Prof. Max Muller and Prof. Deussen - Landed in New York and took charge of the Vedanta Society in 1897 - Became acquainted with Prof. William James, Rev. R.H. Newton, Prof. Josiah Royce of Harvard, Prof. Hyslop of Columbia, Prof. Lanmann, Prof. G.H. Howison, Prof. Fay, Mr. Edison, the inventor, Dr. Elmer Gates, Ralph Waldo Trine, W.D. Howells, Prof. Herschel C. Parker, Dr. Logan, Rev, Bishop Potter, Prof, Shaler, Dr. Jaynes, the chairman of the Cambridge Philosophical Conference and the Professors of Columbia, Harvard, Yale, Cornell, Barkeley and Clarke Universities - Travelled extensively all through the United States, Canada, Alaska and Mexico - Made frequent trips to Europe, delivering lectures in different parts of the Continent- Crossed the Atlantic seventeen times - Was appreciated very much for his profundity of scholarship, intellectual brilliance, oratorical talents, charming personality and nobility of character - Made a short visit to India in 1906- Returned to America- Came back to India finally in 1921 - On his way home joined the Educational Conference, Honolulu-Visited Japan, China, the Philippines, Singapore, Kuala Lumpur and Rangoon - Started on a long tour and went as far as Tibet in 1922 - Established centres at Calcutta and Darjeeling - Left his mortal frame on September 8,1939.

How to be a Yogi is a book on science and practice of different types of Yoga, which are interconnected with religion and philosophy and should be called into practice. These lectures were delivered by Swami Abhedananda before the American students of Yoga and philosophy and were published in book form from the Vedanta Ashrama, San Francisco, California, U.S.A.

In this book, Swami Abhedananda has consecutively surveyed the science and practice of Yoga as a whole. This book contains nine illuminating chapters on different types of Yoga along with their philosophy, psychology, and science. In the introductory chapter, the Swami has defined what a true religion is. He says that true religion is not based on mere theory or speculation but on practice. Religion really prepares the ground of divine spirituality which does neither depend on mere reading of the scriptures, nor on the theological and speculative discussion of the shastras, and not on intellect and reason, but on divine realization or immediate awareness of the unchangeable Reality.

Swami Abhedananda has said that he had the good fortune to be acquainted with a divine man, whose name is Ramakrishna Paramahamsa. He never went to any school, neither read any of the scriptures and philosophies, yet had reached perfection by realizing the absolute Brahman. From this it is understood that true spirituality and God realization do not depend on any book knowledge, nor on the intellectual apprehension, but on the sincere spiritual practice of Yoga which makes a man commune with the Absolute. Swami Abhedananda also says that self knowledge is acquired neither by sense perception, nor by reading of the shastras, but by studying one's own nature, and by practicing different branches of Yoga.

The second chapter deals with the discussion on What is Yoga. In this chapter, the learned Swami has given the eleven definitions of Yoga. In the eleventh definition he says that Yoga means the restraint of all thought actions through concentration and meditation. 'Yoga' is derived from the Sanskrit root, juj, which means 'to join', i.e., to join the jivatman with the Paramatman. The practitioners of Yoga are mainly divided into three classes, and among them the born Yogis are included in the first class, the half awakened souls are included in the second class, and the aspiring souls are included in the third class.

The third chapter is devoted to discussion on Hatha Yoga. Hatha Yoga is the science, which teaches to conquer the worldly thirst, sleep, diseases, etc. Some Hatha Yogis practise trataka, and fix their eyes in the centre of the eye-brows for gaining concentration and meditation and psychic powers.

The Swami has defined different kinds of asana or sitting posture to be practiced by the Hatha Yogis, but at the same time he warns the Hatha Yogis not to practise Yoga which develops the psychic powers, and instructs them to practise that kind of Yoga which is helpful to the Raja Yoga, because the Raja Yoga leads the souls to realization of God-consciousness and perfect freedom.

In the fourth chapter, Swami Abhedananda has discussed the laws and science of the Raja Yoga, which is known as the royal road, or the surest path to perfection. The Raja Yoga deals entirely with the mind and its powers, and so it may be called the science of applied psychology. This best and grandest method of Yoga teaches to stengthen the will of the mind and to develop the powers of concentration and meditation, which lead to the state of super-consciousness.

The practice of Raja Yoga is divided into eight steps like yama, niyama, asana, pranayama, pratyahara, dharona, dhyana and samadhi. The asana is the posture of sitting. Patanjali says that a suitable and easy asana can be chosen for making the spinal cord straight and for taking the breath without any obstruction and difficulty. The Yogis say that the vital power of energy is stored up in the nerve-centres of the spinal cord, and is the cause of the motion of the lungs, which, in turn, produces respiration, and respiration is the cause of circulation of blood and of all other organic activities. So the spinal cord should be kept straight to help the current flow easily through the channel of the spinal cord. The pratyahara is the preparatory process for concentration. Concentration means to reduce the divergent desires or manifold modifications of the mind into their causal state and to make them concentrate upon one point. Samadhi is the state of super consciousness. Patanjali divided this supreme state into different classes, and said that nirvija or nirvikalpa Samadhi is the highest one, where all seeds of desire and cause of the cycle of birth and rebirth are eternally transcended. The process of concentration In the highest state of samadhi, a sadhaka gains the spiritual illumination, and cuts asunder the knots of nescience or avidya.

In the fifth chapter, the Swami has dealt with the Karma Yoga. The Swami says that the word 'Karma Yoga' connotes the idea of 'dexterity in work'. The spirit of worship must be the keynote of all kinds of work, and work with this divine spirit is known as philosophy of work. The Swami further says that, in truth, we do work through the inspiration cum dictation of the will of the mind, so if we purify our mind with the spirit of worship of God and give up all kinds of ego-centric idea from our mind, the mind is concentrated and enjoys tranquil peace and happiness. The Swami says: "He who wishes to practise the Karma Yoga, should abandon the attachment to the fruits of his labours, and learn to work for work's sake. "The teachings of the Bhagavad Gita is that you have the right to do the works, and not to ask or enjoy the fruits thereof. So the works with love for God and love for the humanity are known as the Karma Yoga which is the pre-condition of the Bhakti Yoga.

In the sixth chapter, Swami Abhedananda has described the main principles of Bhakti Yoga. The bhakti Yoga is the path to devotion for God and also the path of love for all the creatures of the world. The Swami says: "The word bhakti means devotion', while Yoga, in this case, signifies the union of the individual soul with God. Hence the Bhakti Yoga is the method of devotion by which true communion of the soul with the supreme Deity is accomplished". There are mystics all over the world who devote their lives in the holy service to beloved God. The Christian mystics, the German mystics, the Spanish mystics and other mystics of other nations are like the Vaishnava mystics of India and the Sufi mystics of Persia and Arabia. All of them worship their ever-beloved friend, God, through love and devotion, and they want the Divine communion with God in ecstasy which makes them forget their consciousness of the body and the world.

Swami Abhedananda says that a Bhakta "never forgets his relation to his beloved. His mind is concentrated and one-pointed, and consequently, meditation becomes easy for him. True devotion or continuous remembrance of the divine Ideal leads him to unceasing meditation, and ultimately lifts his soul to samadhi, where it realizes God, and communes with Him, undisturbed by any other thought, feeling, idea or sensation. Becoming dead to the sense phenomena, it lives on the spiritual plane of God consciousness". In fact, a true bhakti Yogi does everything in this world of works or duties with the spirit of worship, and so the material sense phenomena cannot entangle him in the world of Maya. 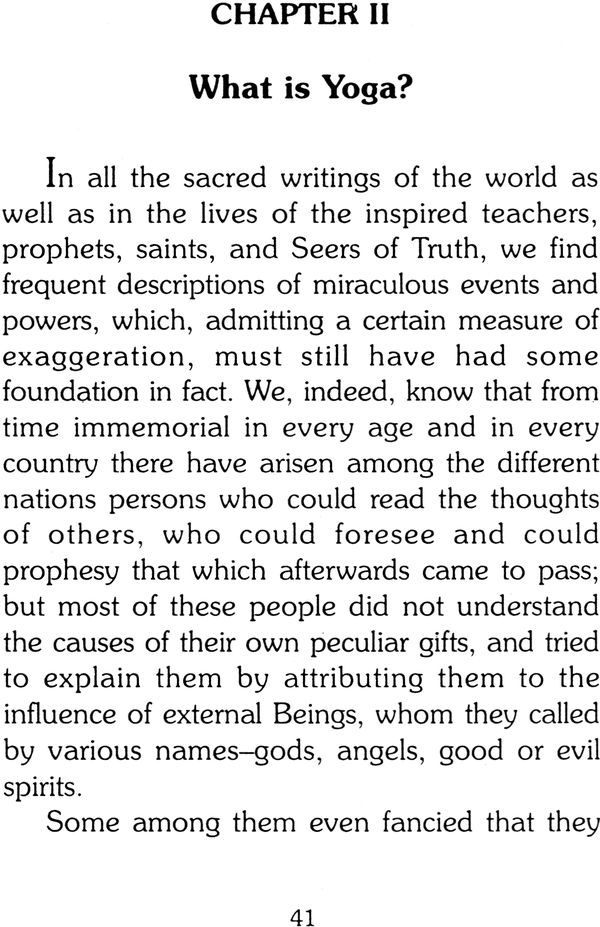 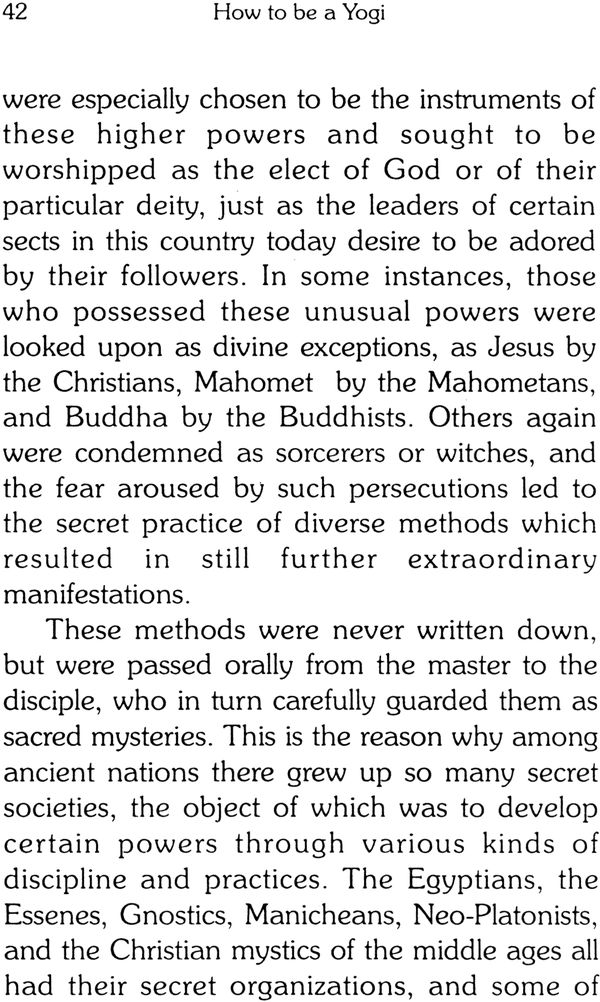 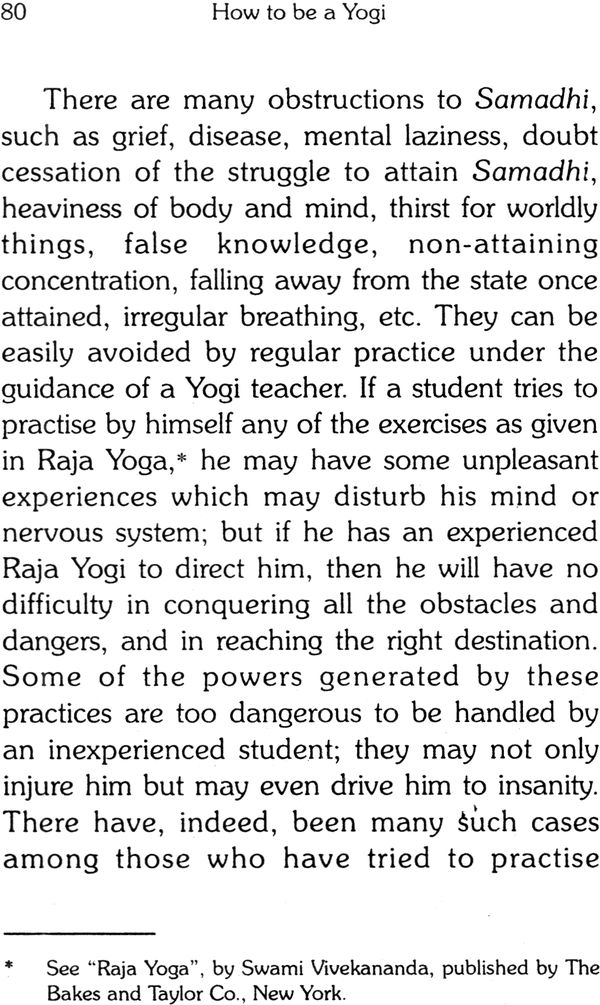 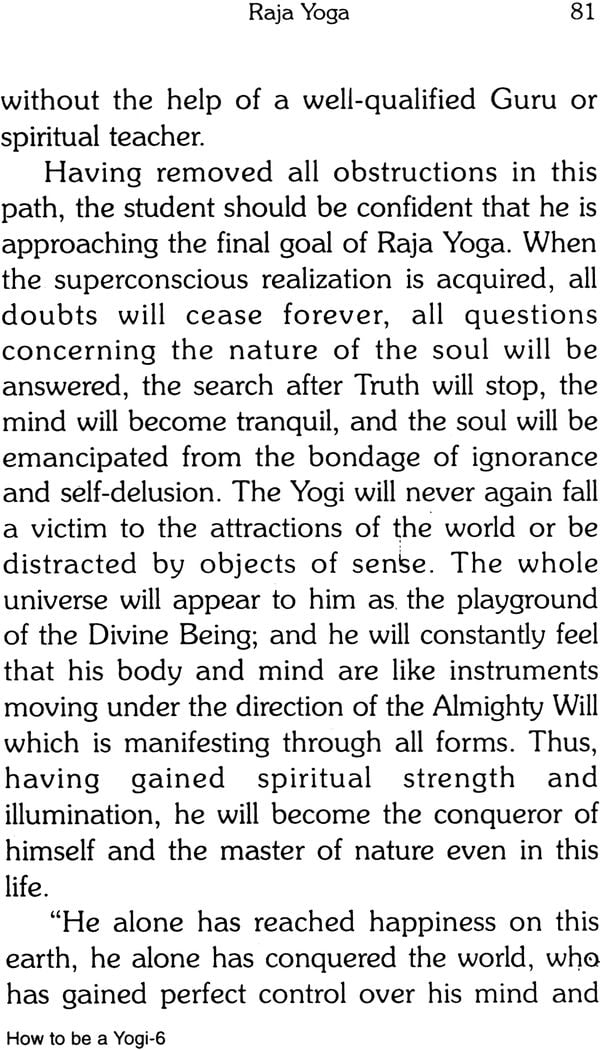 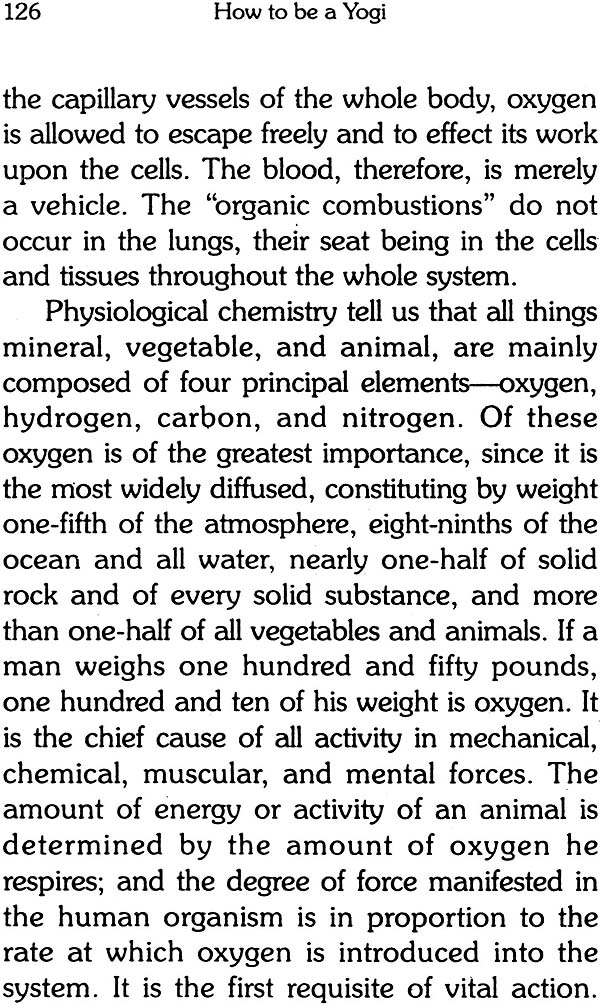 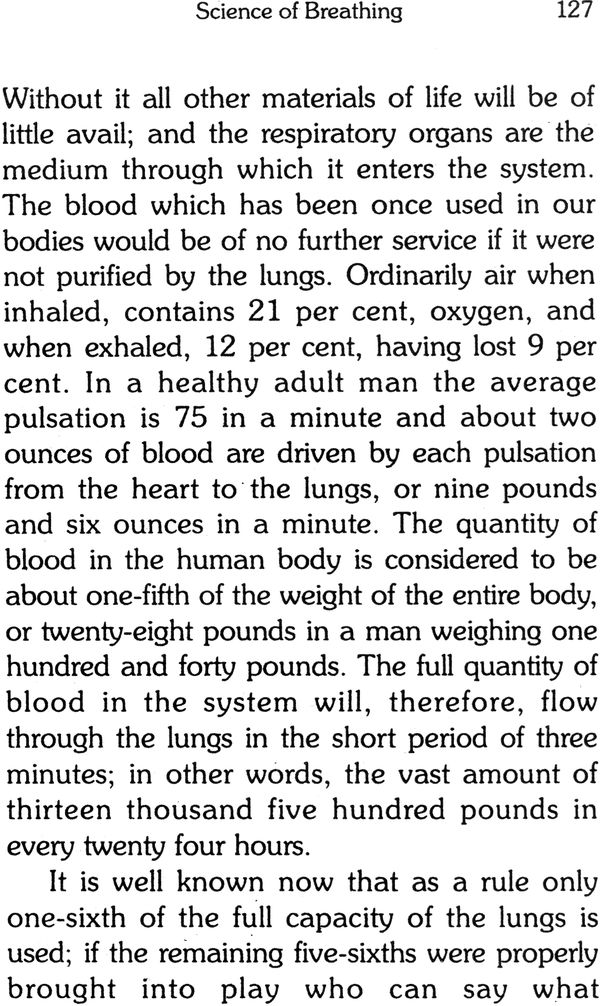 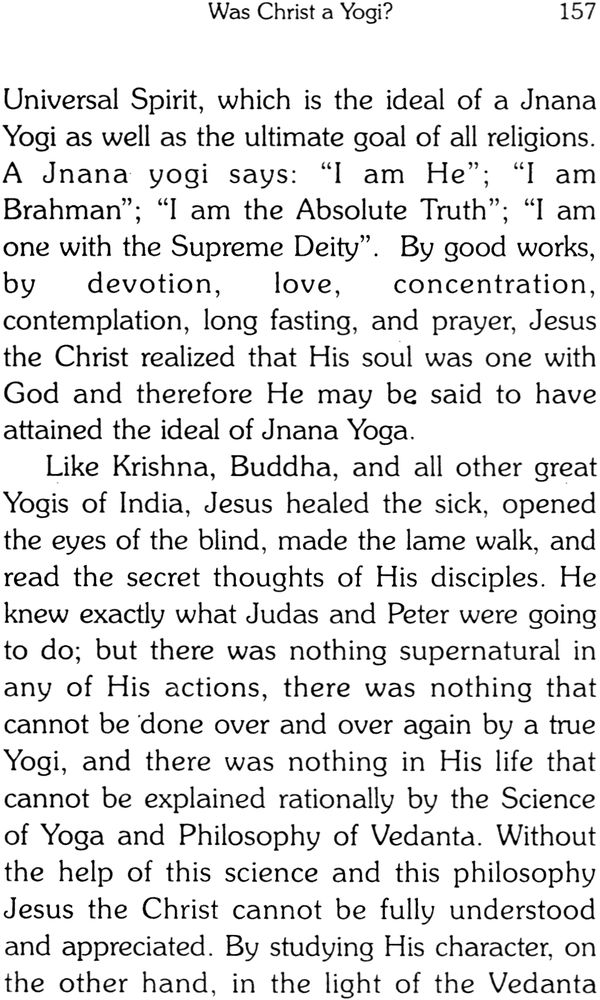 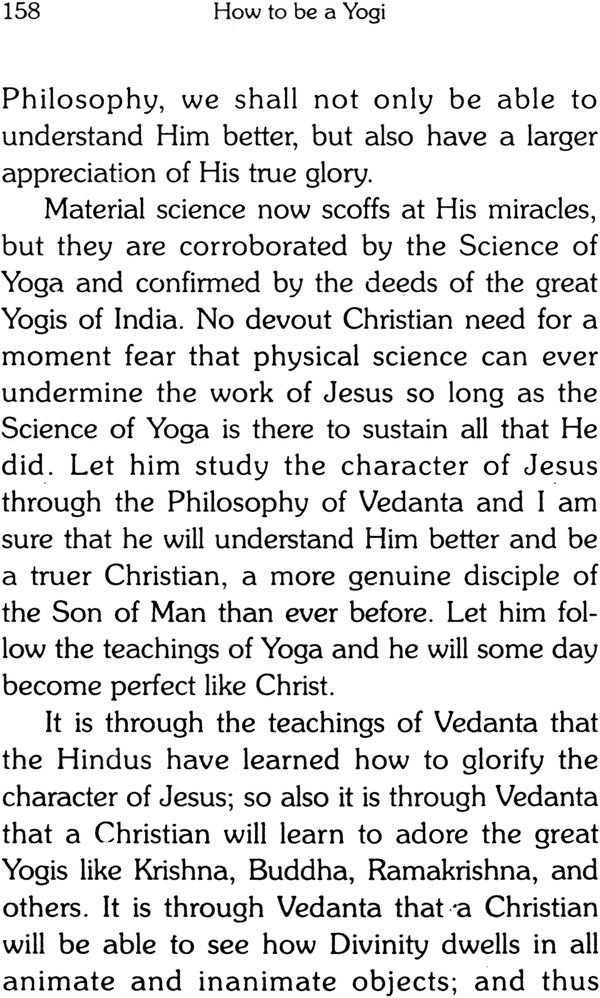 Life of Shri Yogendra: THE HOUSEHOLDER YOGI
By SANTAN RODRIGUES
$21
Out of Stock