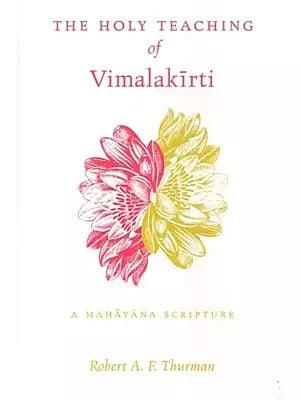 The Holy Teaching of Vimalakirti- A Mahayana Scripture

Fully insured
About the Book
Called the "jewel of the Mahayana sutras," this book presents the major teachings of Mahayana Buddhism in a precise, dramatic, and even humorous form. For two millennia this sutra has enjoyed immense popularity among Mahayana Buddhists in India, central and southeast Asia, japan, and especially China, where its incidents were the basis for a style in art and literature prevalent during several centuries.

Vimalakirti, although an Indian, can be considered the first Zen master-apart from the Buddha himself-as he specializes in a type of discourse that is subtle, in a lucidity that balances on the razor's edge of paradox and yet is quite logically coherent. His message is particularly appealing to our secular age, because he was a man of the world, not a monk or saint. In essence, Vimalakirti clears up the confusions surrounding the central Buddhist concept of emptiness, or voidness-presenting it not as nihilism but rather, in the translator's words, "as the joyous and compassionate commitment to living beings born form an unwavering confrontation with the inconceivable profundity of ultimate reality"

This translation makes available in relatively nontechnical English the Tibetan version of this key Buddhist scripture, previously known to the English-speaking world only through translations from Chinese texts. The Tibetan version is generally conceded to be more faithful to the original Sanskrit than are the Chinese texts. The Tibetan version also is clearer, richer, and more precise in its philosophical and psychological expression. The twelve books of the sutra are accompanied by an introduction and an epilogue by Dr. Thurman, and by three glossaries: Sanskrit terms, numerical categories, and technical terms.

About the Author
ROBERT A. E. THURMAN, who was ordained a Buddhist monk in 1964 by Tenzin Gyatso, the current Dalai Lama, is the current director of Tibet House in New York City. He is the father of five children including, the actress Uma Thurman. One of the world's most respected scholars and translators of Tibetan and Sanskrit, Thurman has translated The Tibetan Book of the Dead (1994) and is the author or translator of many books including, The Central Philosophy of Tibet: A Study and Translation of Jeer Bong Khapa's Essence of True Eloquence (1984), Speech of Gold: Reason and Enlightenment in Tibetan Buddhism (1989), inside Tibetan Buddhism (1995), and Infinite Life: Seven Virtues for Living Well (2004). This book was published in cooperation with The Institute for Advanced Studies of World Religions.
Preface
Amid the glittering profusion of the jewelry of the Mahayana Buddhist Scriptures, The Holy Teaching of Vimalakirti stands out like a masterfully faceted diamond, so located between the heaps of gold, silver, and pearls of the Transcendent Wisdom (Prajnaparatmita) Scriptures and the array of sapphires, rubies, emeralds, and other gems of the Garland (Avatamsaka), or Inconceivable Liberation (Avatamsaka) Scriptures as to refract the radiances of all, beaming them forth to the beholder in a concentrated rainbow-beam of diamond light.

I elaborate upon this traditional metaphor here to convey a sense of the unique-ness of the Vimalakirti among Buddhist Scriptures; its utility for study as containing a quintessence of Mahayana doctrines, both of the profound and of the extensive categories, and its aesthetic virtue as an object of the connoisseur's delight. This helps us understand how a hundred generations of Mahayana Buddhists in India, Central Asia, China, Japan, and South East Asia were disposed to study, revere, and enjoy this Scripture, finding enlightenment, inspiration, and the grace of pleasant humor.

Nothing concrete is known about the "original text" of the Vimalakirti. It purports to record events that took place during Gautama Buddha's time (sixth to fifth century B.C.), but no text was apparent in India until after Nagarjuna (c. first century B.C. to first century A.D.) had revived the Mahayana traditions, discovering the Mahayana Sanskrit Scriptures, the Vimalakirti text among them. This text was subsequently translated into Chinese seven different times, starting in the third century, the version of Kumarajiva (A.D. 406) being the most popular, and that of Hsuan Tsang (A.D. 65o) the most technically accurate. It was translated into Tibetan twice, the definitive version completed in the ninth century by the well-known translator Chos Nid Tshul Khrims. It was also translated into Sogdian, Khotanese, and Uighur. Unfortunately all basic Sanskrit texts are now lost, except for some fragments found in Mahayana philosophical works. The Japanese chose Kumarajiva's version for their translation, and the majority of modern translations have been based on this text. Recently, Dr. E. Lamotte set forth to rectify this situation by basing his fine French translation on the Tibetan and the Hsuan Tsang versions. The history comes full circle finally, as the Rev. E. Bangert first translated the Tibetan into modern Thai and then into current Sanskrit.

Introduction
"Matter is not void because of voidness; voidness is not elsewhere from matter. Matter itself is voidness. Voidness itself is matter."' This statement, common in Mahayana Scriptures, expresses the quintessence of the Middle Way (mad-hyamapratipat). It is also fundamental to the message of Vimalakirti. It is utterly profound, yet so simple it is all too easy to overlook its astounding implications. "Matter" represents the familiar world, the world of relativity, whereas "voidness" represents the goal of spiritual longing, the ultimate, the transcendental, the infinite and eternal. If the two are just the same, what is the purpose of religion? Of philosophy? Of the austerity of spiritual practice? Of this statement or any statement or teaching? Is this not the most blatant form of nihilism?

Indeed, a great many scholars, ancient as well as modern, have mistaken the Middle Way taught by Vimalakirti, Nagarjuna, and the Mahayana Buddha as leading to the annihilation of all values, mundane and spiritual, and the main purpose of this introduction is to avert this disastrous mistake. The key lies in the concept of "voidness." The word is carefully chosen, and does not mean "nothingness." Thus, the equation of "matter" with "voidness" tells us some-thing about the condition of matter, not that matter does not exist at all. And the equation of "voidness" with "matter" emphasizes the fact that this teaching is, far from being nihilistic, the very cure for nihilism.

Nagarjuna expounds the same theme in his Vigrahavyavartani: "I salute the incomparable, perfect Buddha, who made the declaration of the equivalence in meaning of voidness, relativity, and the Middle Way."2 Here we find, instead of "matter," the term "relativity" (Pratityasamutpada), which is another key term of the Middle Way philosophy. It means that all finite things are interdependent, relative, and mutually conditioned, and implies that there is no possibility of any independent, self-sufficient, permanent thing or entity. An entity exists only in relation to other entities. It must be composed of parts, which came together when it was produced and which separate at the time of its dissolution.