Hindu Tenets: The Founding Doctrines of Vedic Hindu Dharma (Eleven Commandments of The Hindu Way Of Life Down The Ages)

This is the story of the religiosity of the ancient Aryan race of people who lived in their homeland called the Aryavarta or Bharata or India (now) from the prehistoric times in the history of human civilisation, and their way of life called the Vedic Dharma, which forms the heart and soul of the present day Hindu Dharma or Hinduism. The general reader from any part of the world will find this small book to be quite informative about one of the most widely practiced and living religions of all times.

Hindu Tenets is meant for those keen minds of a rejuvenating India who are professionally trained in the modern Western way. It gives them a glimpse and feel of the Vedic Hindu Philosophy of life, how it evolved, developed and proliferated down South the Himalayas hi the East, and also the way it stood so firm during the most testing times in the history of the world.

This book lists the eleven principles on which the Vedic Hindu Dharma rests till today. They may be called the Eleven Tenets — the founding doctrines of Hinduism — to give the entire picture in a very concise form. The most significant among them are: belief in one Supreme Being, in His revealed wisdom in the shape of the Vedas; in the great law of Karma or Action; in the theory of Reincarnation of the soul; and belief in the legacy of the great rishis of the bygone days, who are the guiding force in the lives of Indians even today.

Mr. J Agarwal is a keen researcher and proficient writer on theology. Having retired as Chief Engineer from a government job, he has been devoting all his time and energy to the study of the Vedic sciences and art of Yoga Practice. This has led to formal study of the foundations of religious beliefs including development of India’s spiritual philosophy from the Vedic times to Swami Dayananda Saraswati and thereafter. The present book is the result of his untiring efforts over the past eight years.

Mr. Agarwal is now fully disposed to the research and dissemination of the knowledge of the Eternal Vedas in India and abroad. He is also the founder President of The Institute of Vedic Research & Studies Lucknow, India. He has delivered lectures on subjects connected with the Vedic Hindu Philosophy and Yoga at several places in India and the US.

During my rather long stay in the United States of America this time in connection with the arrival of two new souls in our family, I, along with Kamal, my wife, had an opportunity to meet many people, mostly professionals of Indian origin, in the states of Ohio and Michigan. We were struck by their ignorance of the concepts of their religion (Hindu Dharma). However they appeared quite keen to know more, not only for themselves but also for transmitting knowledge of the basics of Hindu Dharma to their next generation. I felt a little bad, but, nonetheless prompted and motivated to take up the issue and make use of my available time to write this monograph for them.

The present monograph is, therefore, an attempt to provide a small window to enable those who may be interested to know as to what, where and how the most ancient faith of humans evolved and flourished down south of the mighty Himalayas in the East, which so triumphantly stood the rigors of time spanning over many millennia.

In preparation of this book, it gives me great pleasure to express my grateful indebtedness to the following persons who helped me not only in providing the necessary tools but also for improving and editing whatever I kept on writing for nearly four months.

1. First of all my wife, Kamal, for all the inspiration and moral support she gave me during the time, without which it would not have been feasible at all. She also helped me finalise the general theme.
2. My son-in-law, Parag and daughter, Meenal in Columbus, Ohio, where I got most of the time for this. They also helped in comparing and typing the interim draft.
3. My grandson Akshat (daughter’s son), age 7, who always delighted us by memorizing and reciting Veda Mantras very precisely.
4. My daughter-in-law, Maneesha, and son, Vivek in Farmington Hills, Michigan, for comparing, editing and bringing out the final document.
5. And the blessed little ones, Saloni (grand daughter) and Ilisha (daughter’s daughter), because of whom we happened to be in the US at the time.

All the copies of the first edition having been sold in record time of just about ten months, the publishers wanted to bring out the second edition, and desired me to review the material, carry out expansion! elaboration whatever, to further embellishment.

Many chapters have, therefore, been revised, rewritten and upgraded.

Besides, a new chapter has been added as Doctrine 11 on ‘Belief in Yoga Philosophy of Self-Empowerment and Spiritual Tradition’. ‘Daily Prayer’ has been merged with ‘Panch Mahãyajna’ in Doctrine 9.

Only a has been taken from Scriptural Transliteration for longer a sound which is otherwise almost impossible to write in Roman Script. Barring a few very common names and popular words it has been used everywhere to help the readers read numerous names and Shlokas mentioned in the book. Rest is as used in government papers, magazines, newspapers and general books.

Hindu Tenets is the story of the religiosity of the ancient Aryan race of people who lived down south the Mighty Himalayas in the East in their homeland called the Aryãvarta or Bhãrata or India (now) from the most prehistoric times in the history of human civilization and their way of life called the Vedic Dharma, the heart and soul of the present day Hindu Dharma or Hinduism. The general reader from any part of world society will find this small book to be quite informative about one of the most widely practiced and living religions of our times. It is also intended to be for use of all educated young man and woman who are professionally trained in the modem western way to enable them to get an idea of the faith and culture coming down to us though the millinnia and introducing us to the perception of the cultural and spiritual heritage of the bygone days and to enjoy the finest melody of Truth of the sublime philosophy of human life on our beautiful planet, Earth.

The monograph is meant for those keen minds of rejuvenating India who are now spread all over the world. It will give them a glimpse and acquaint them with the Vedic Hindu Philosophy of life as to how it evolved, developed and proliferated down south the Himalayas in the East and also the way it stood so firmly during the most testing times in the history of the world spanning over millions and millions of years.

The 2nd Part of the book capsulizes the whole philosophy of Vedic Hindu Dharma into eleven basics. They may be called the Eleven Siddhãnts or Tenets or Commandments of the Hindu life and Dharma. The most significant among them are: Belief in one Supreme Being, the Creator of the Universe; belief in His (Supreme Being’s) revealed Wisdom in the form of the Vedas; belief in the six schools of Indian Philosophy; belief in the Great Law of Karma or Action; belief in the theory of reincarnation of the soul; and belief in the legacy of the great Rishis of the bygone days, who are the guiding force in the lives of Indians up to this day. Like the Rishis they bow to the Almighty.

Most humbly we bow to thee, O Supreme Lord, at Thy Command moves the giant wheel of Time. Thou art Eternal and beyond Eternity. 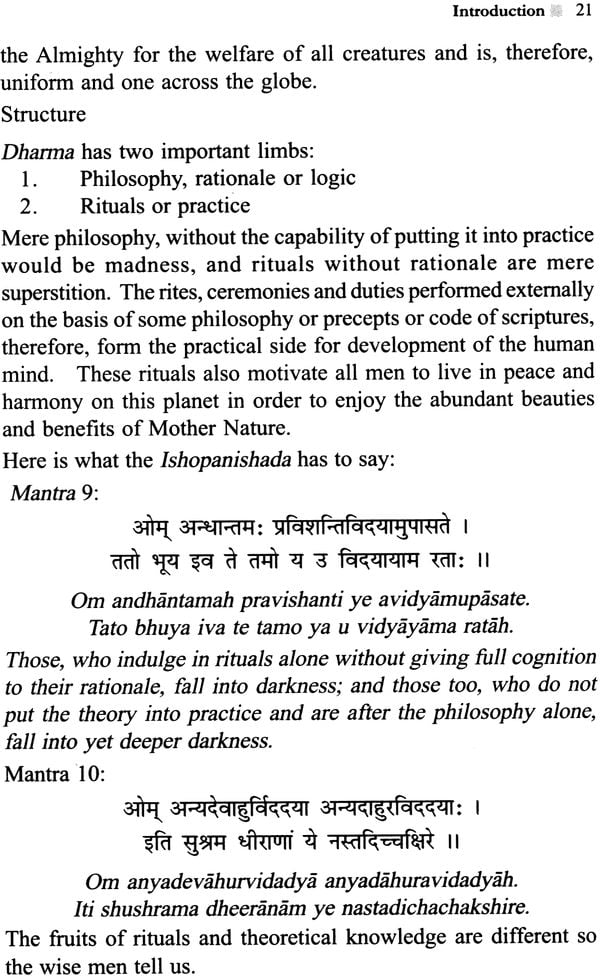 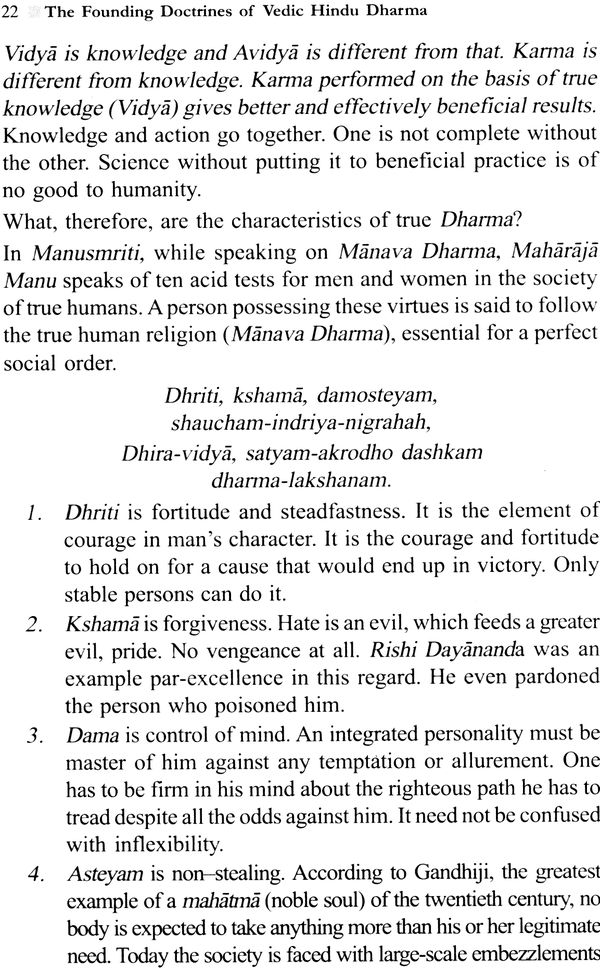 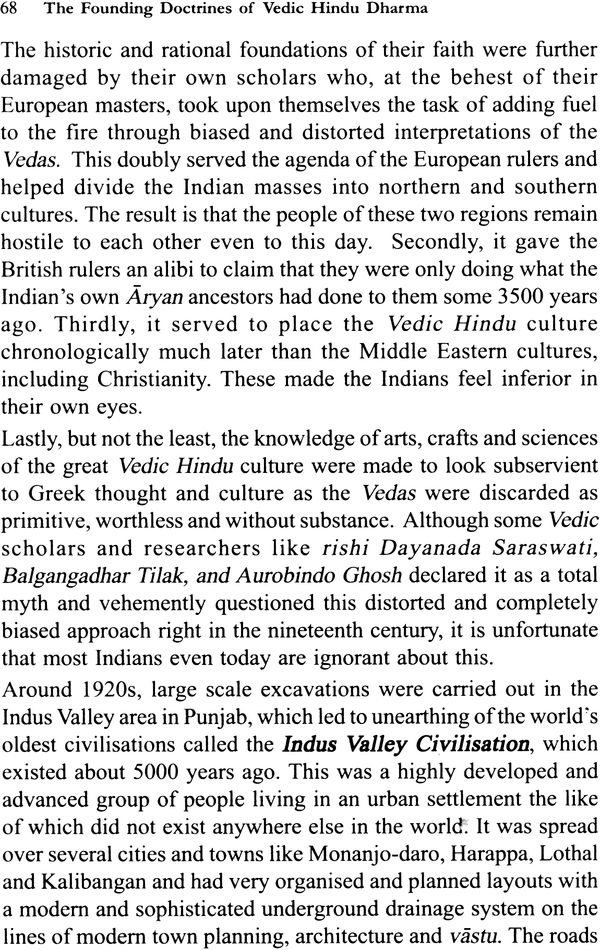 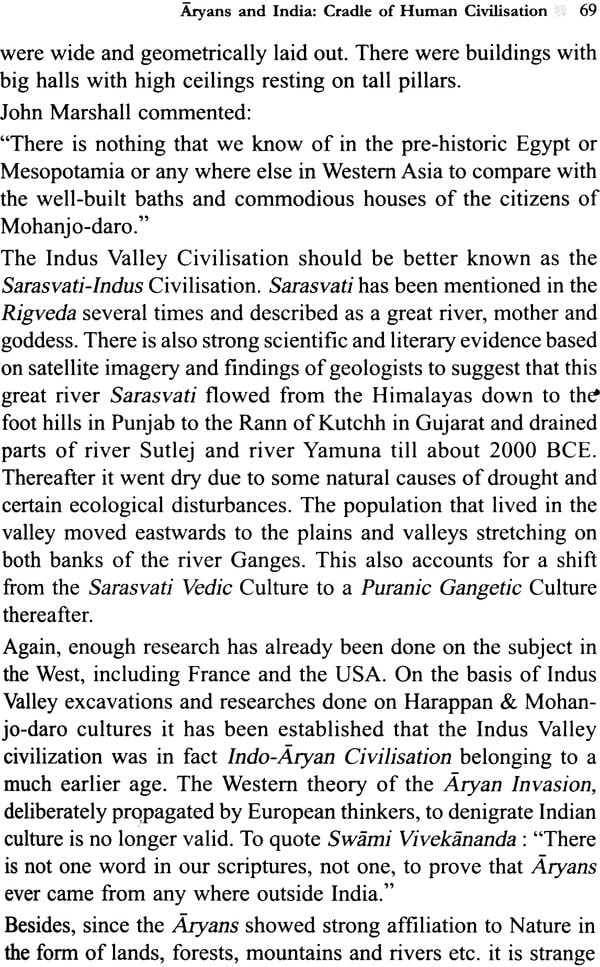 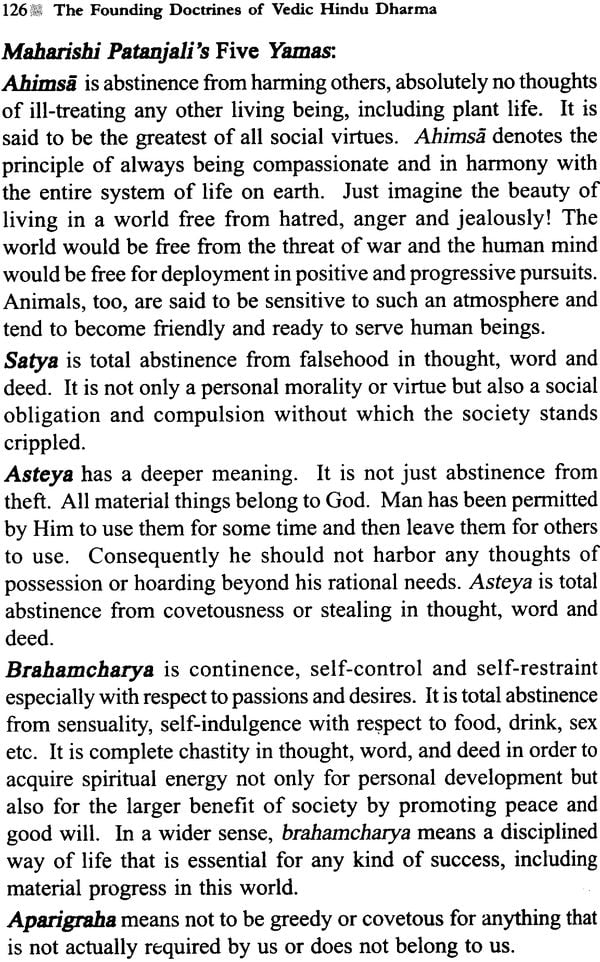 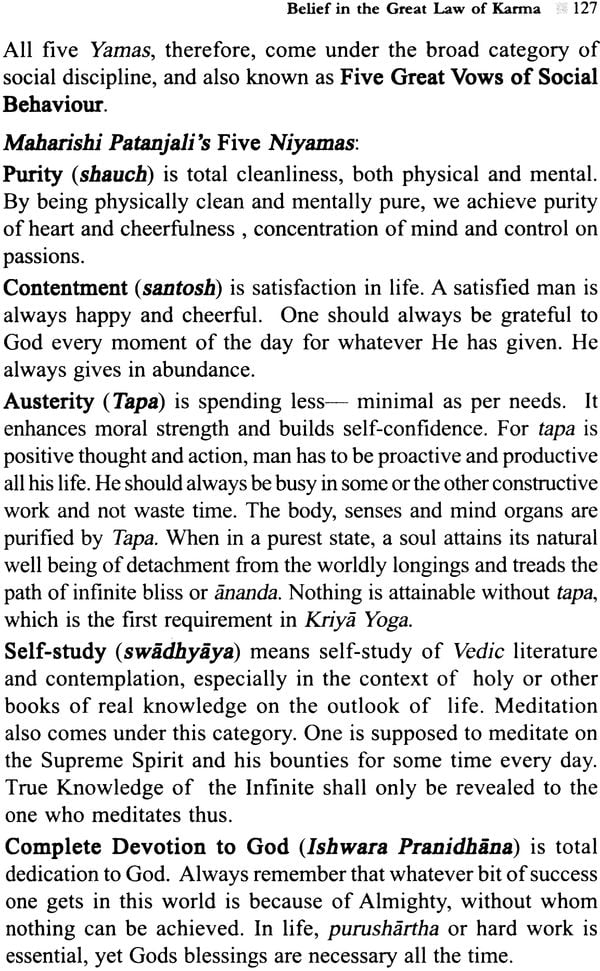 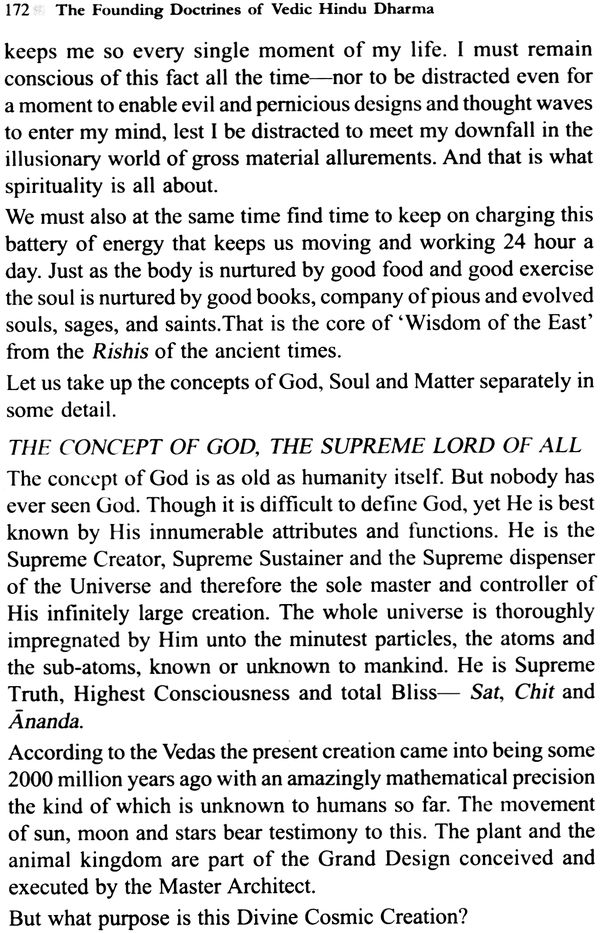 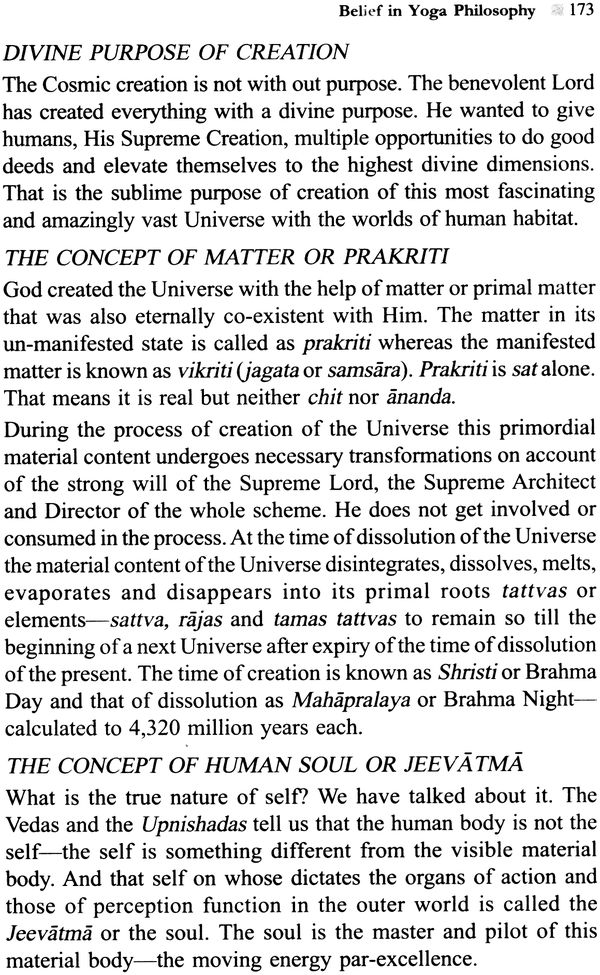 Supreme Court Judgement on Hindutva A Way of Life
By M. Rama Jois
$10 Hindus Under Siege : The Way Out
By Subramanian Swamy
$21
FREE Delivery The Hindu Way of Awakening (Its Revelation, Its Symbols : An Essential View of Religion)
By Swami Kriyananda
$17.50 Ways to Truth: A View of Hindu Tradition
By Ananda Wood
$34.50
FREE Delivery

Ways to Truth : A View of Hindu Tradition
By Ananda Wood
$24.50
FREE Delivery The Gita Way - Secret Recipe to Achieve The Purpose of Life
By Shweta Chandra & Santosh Srivastava
$17.60
FREE Delivery
$22  (20% off)