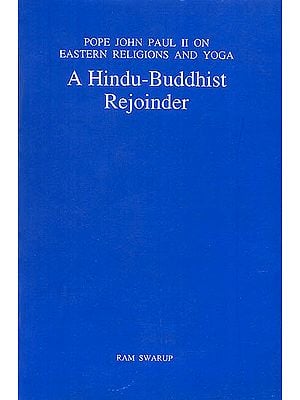 As its very name describes, this volume is a rejoinder to Pope John Paul’s recent book crossing the Threshold of Hope. While repeating old claims for the Church and its dogmas, his book notices non-Christian religions without the customary derogatory epithets. It is a new thing in Christianity. In the past, “other” religions were simply handiwork of the devil, and it was the special duty of the Church to overthrow them. The old aim still remains but it now stated more softly.

In his book, the Pope discusses Judaism from which Christianity derives; he also discusses Islam, a sister religion. All of them have a history of conflict though doctrinally they also have many things in common a common God, common doctrines and common hatreds etc.

Pope John Paul discusses Buddhism and Eastern yogic practices, and also of Europe’s New Age Movements in which he sees clear Eastern influences. For the purpose of this rejoinder, this part of his book is most important one, and the rejoinder takes it the most consideration.

This volume could be regarded as author’s contribution to the dialogue. It does not accept Christianity’s view of itself and of others. It offers a different view – a Hindu- Buddhist view of both. It continues the work begun in the author’s the Word as Revelation. Names of Gods and carried on in his Hindu View of Christianity and Islam.

The book is written in reply to the Pope’s but the intention is not polemical. It could even be delinked from its immediate context and read independently. The idea is not to find faults but to warm against clichés, to promote understanding of the subjects and truth.

Pope John Paul’s Book Crossing the Threshold of Hope says nothing new it merely reiterates Catholics traditional position but the book has its own importance for it carries the Pope’s signature.

In this book, along with Christianity, the Pope discusses non-Christian religions a departure from the pre-colonial era. “other” religions have always interested the Church but there was seldom any official notice of them. They were simply considered as handiwork of the Devil, and it was the special duty of the Church to oppose them. Even at present, hundreds and thousands of missionaries are busy doing that, but this time “the other religions” have been mentioned under their own names without pejorative notice.

Pope John Paul’s book discusses Judaism from which Christianity derives it also discuss Islam, a kind of sister religion, with which Christianity had to do much from its very birth. In spite of their bitter conflicts, these religions ideologies share many things in common: a common God, common doctrines and common hatreds. The Pope mentions his fact and wants it to become the basis of a new understanding between them.

He also speaks of Buddhism and of eastern yogic practices, and also of Europe’s New Age Movement in which he sees clear Eastern influences. For our purpose, this is the most important part of the book and we have taken it the most into consideration.

Christianity is doing well outwardly so far as money, power and counting of souls are concerned, but inwardly it is facing an acute problem. The last century saw the rise of a rationalist movement which found Christianity wanting in reason. During the same period, Eastern religions have also been getting better the same known and their challenge has been equally far-reaching. They hav shown that Christianity’s spiritual and ethical worth is no better than its rational worth.

They challenge the very foundations of “revealed” religions. Christianity offers to give us a revealed truth of which it claims to be the sole custodian. The Eastern religions on the other hand tell us of a truth which is “hidden” within man himself; they say that much of man remains unknown to himself; they ask him to seek this “hidden” and unknown” to himself. Thus they speak of truths which are man’s own, which is part of him, which reside in every heart, and which a man seeks and finds in his deeper moments. By the same token they speak of a truth which is not mere history or historical but which is true for all time and all people. In one sense, this truth is also a revelation, manifesting what is hidden, but it is different in conception and has little to do with revelation of revelatory religions. It is a revelation which man is over seeking and over finding within him. Here there are no special messengers with their exclusive revelations and no special agencies to propagate them further. Here also are no dogmas but only verifiable truths, truths open to all. Ehi Passa, come and see for you, the Buddha says.

By the same token these truths have no geographic connotation they are merely Eastern in a manner of speaking. Probably they were most developed and best preserved and still exist as a living tradition in India but they belong to all genuine seekers coming from different times and places Egypt, Greece, Europe, the Americas, etc. Pythagoras, Plato, Apollonious, Plotinus, Stoics, Hermetists, Gnostics are fully eastern. European seekers are already discovering a pre-Christian Pagan Europe which was closer to the East in its spiritual orientation. In this way they are also rediscovering their religious past and their Gods. It should work for their religions self-renewal.

Recently the Church has invited dialogue with other religious. For several centuries, Christianity has been at the Top and it has conditioned our minds to think about it and, what is even more important, about ourselves to in a particular way. In this guided dialogue, it was expected that we would keep to these programmed thoughts. Bu think of Christianity or of themselves as it does and wants them to do. They have now their own thoughts about is as well as about themselves.

This volume could be regarded as our contribution to the above dialogue. It does not accept Christianity’s view a Hindu-Buddhist view of both. It continues the work begun in our The Word as Revelation: Names of Gods and carried on in our Hindu View of Christianity and Islam.

The book is written in reply to the Pope’s but the intention is not polemical. It could even be delinked from its immediate occasion and read independently. The idea is not to find faults but to warm against clichés, and to promote, deepen and broaden understanding of the subject and to serve truth.