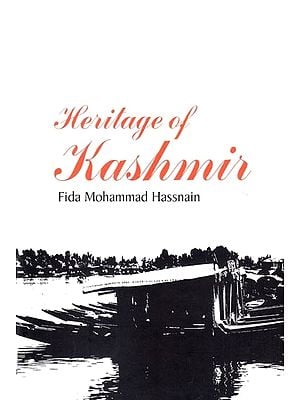 Heritage of Kashmir contains papers. presented at the seminar held at Srinagar, Kashmir, by eminent scholars in various fields. It is hoped that this volume will provide the researcher as well as the scholar fresh lines of approach for further investigation into the composite culture of Kashmir.
The Collections of papers, edited for publication in this volume, is a part of the material presented to the Council from time to time. It is planned to edit and publish the material and papers received by the Council in a series of such other publications.
The Council has already undertaken a phased programme which will include the publication which will include the publication of the reports and papers prepared on the projects initiated by the Council and the researches and Investigations conducted by the members of the Council and scholars associated with the Council, the publication of quarterly journal of research and the preparation of monographs and books on various aspects of cultural and scientific research.

Sufi Master, Haji Professor Fida Hussain was born in Srinagar, Kashmir in 1924. Having graduated from the University of Punjab Lahore, He completed his post graduate studies in History and Law from the Aligarh, Muslim University, India. Since then he has received several degrees and awards from various Universities and Institutions of India, Japan, Switzerland, Germany and Mexico.
He began his service career as a professor in 1948 and retired as the Director of Archives, Archaeology, Research and Museums, Jammu & Kashmir State in 1980. He is an author of two dozen books about history, culture and mysticism. He is the first Kashmiri writer whose books have been published in Poland, Spain, Italy and the United Kingdom. He was initiated into Sufism by Hazrat Hayat Boumann, a pious lady mystic belonging to Sufi Order established by Pir-o-Murshid Hazrat Inayat Khan of Delhi.