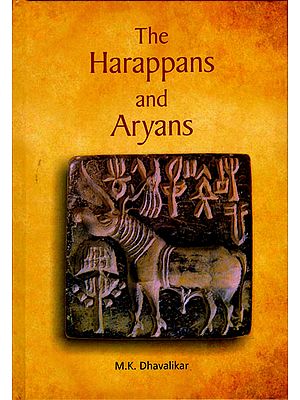 The Harappans and Aryans

Fully insured
About the Book
There is a heated debate from the day the Indus or the Harappan civilization was discovered: whether it was Aryan or Dravidian. The flow of the new data is continuous and the controversy is becoming acrimonious. It appears that a Tsumani-like calamity forced Harappans to migrate to other regions in the country for sustenance and even beyond it. The problem that has now cropped up is whether the Harappans and Aryans were two different people or one and the same for the simple reason that the latter reach the very same regions where the Harappan presence is also marked, the former evidenced by Harappan artifacts and the latter by an IA language because Max Muller has certified that whosoever speaks an IA language is an Aryan. This was not a hide-and-seek game, but points to their being one and the same people. What is more, these migrations are corroborated by allusions in the later Vedic literature. The study analyses all the new evidence and shows how it has contributed to the makeup of Indian civilization and discusses how it can prove useful to bridge the hiatus between the protohistoric and the historical periods.
About the Author
Madhukar Keshav Dhavalikar (b. 1930), M.A., Ph.D.; joined Archaeological Survey of India (1953) and later taught at Nagpur University (1965-67) and Deccan College, Pune (1967-90) where he retired as Professor of Archaeology (1980-90) and Director (1985-90). He was deputed to Greece to participate in the excavations at Pella, Alexander's capital. He has carried out excavations at many ancient sites which include lnamgaon, Prabhas Patan, Kuntasi among others. He has published over one hundred research papers on Indian art and archaeology and over thirty books which include Indian Protohistory (1994), Historical Archaeology of India (2000), The Aryans: Myth and Archaeology (2007), Socio-Economic Archaeology of India (2014), Gar3ea: The God of Asia (2016), Cultural Heritage of Mumbai (2016), to mention a few. The author has been recipient of several awards and honours. He was General President, Indian Archaeological Society (1966), Indian History Congress (1999) and Indian Art History Congress (2014). He was awarded Silver Medal by the Asiatic Society of Mumbai (2010), Tagore National fellowship by Government of India (2011-13), Gold Medal by the Prime Minister of India (2011), Padmashri by the President of India (2011), and Lifetime Achievement Award by the Government of Madhya Pradesh (2013).
Preface
The present study marks the further development of my Aryans: Myth and Reality (2007) as it supports my contention that the Harappans themselves were Aryans, not only because they spoke an Indo-Aryan language, but also because of the identity of their habitat, material culture, time frame etc. with that of the Aryans. They can be said to be the mirror image of each other, more particularly during the Late Harappan period about 1900-1400 BCE, and the Rv can be assigned to the first half of the second millennium BCE on the basis of the archaeological evidence : the occurrence of horse and absence of iron. The study shows that a slight modification in the average span of Vedic and Puranic generation, from twenty or eighteen years to more reasonable fifteen, enables us to conclude that they were both one and the same people. This could be achieved by establishing the historicity of at least one MB character, Udayana. He was a contemporary of Buddha and his father-in-law is mentioned in a donative inscription at Kausambi. One can count backwards the generations upto Manu, the first Indian king whose historicity can also be established. He ruled, according to the Puranas, ninety-five generations before the MB war which was fought in the mid-ninth century BCE. Manu can be placed in 2200-2300 BCE.

The Harappan civilization began to decline from about 2200-2000 BCE because of a Tsunami-like calamity, which was the same as the deluge described in the Vedic literature, the atapatha Brahman, to be precise. After the deluge subsided, Manu Vaivasvata, traditionally the first king of India began to rule. This event also marks the beginning of Kali Yuga, a period of stress and strain. Udayana was almost the last of the Hastinapura kings, a contemporary of Buddha, a historic personality, with whom commences our historical period, accoding to the existing convention.

Of the six chapters of the book, the first introduces the problem and a broad outline of the glorious Harappan civilization which was at the zenith of prosperity in the mid-third millennium. The succeeding Late Harappan culture was a mere shadow of its prosperous predecessor. The second chapter deals with the period of the Kali Yuga crisis which was characterized by famines, droughts, economic misery, etc. caused by dwindling profitable trade with West Asia as revealed by the voluminous archaeological data. The essay on Harappan Language (Chapter 3), is followed by one on Harappan Legacy, a popular subject. Here, I have selected mostly those items which are not commonly discussed.

The fifth chapter deals with the sixteen Mahajanapadas which every student of ancient Indian history knows well but my attempt has been to show that many of them were in existence before the time of Buddha and Mahavira (6th cent. BcE), and were established much earlier during the later Vedic period, in the latter half of the second millennium. It appears that most of them were chalcolithic chiefdoms but were converted into Mahajanapadas by Late Harappan migrants. As a matter of fact the study started because I was possessed by the problem: Why Indo-Aryan languages are spoken precisely in those regions where the Harappans/Aryans reached and not in other areas? The answer is that the Harappans and Aryans were not two different but one and the same people. This happened not only in India but all over the Old World where Harappan artifacts occur, and at the same time there is a marked influx of Indo-Aryan speaking people who carried Indian peacock with them, the typical Indian bird (Pavo cristatus).

So much is being written these days on Harappans and Aryans and naturally overlapping is unavoidable. I therefore crave indulgence of readers as the subject is the same and so is the data, archeological and literary. But new evidence keeps on pouring and the subject is of global interest.

While working on this book I had useful discussions with Dr. Arvind Jamkhedkar, Chancellor of the Deccan College Deemed University, Prof. K. Paddayya and Dr. Srinand Bapat of the Bhandarkar Oriental Research Institute, Pune. To all of them my thanks are due. 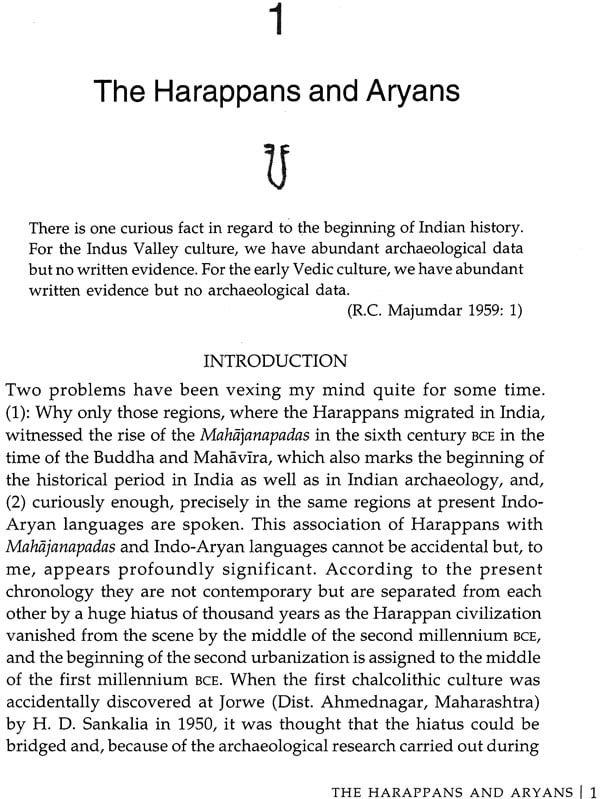 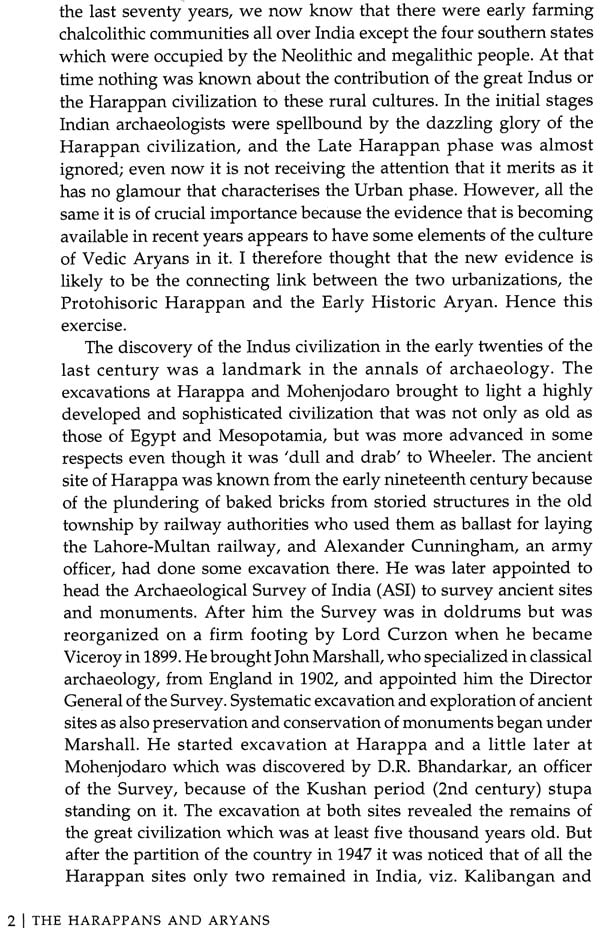 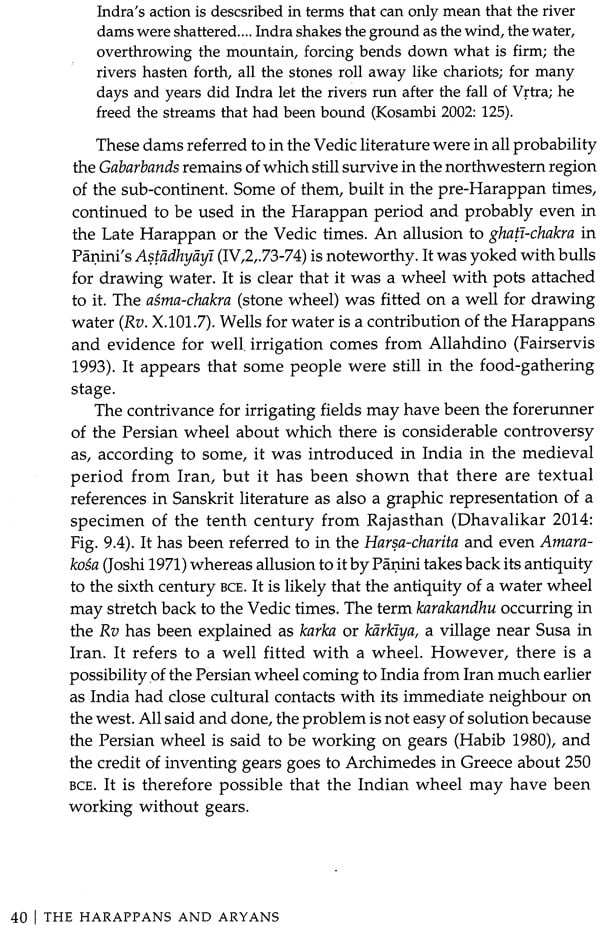 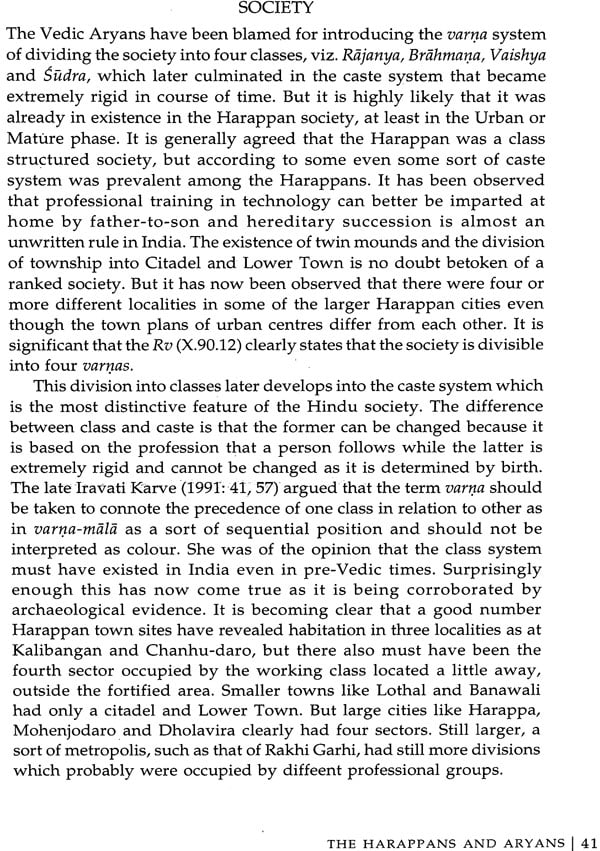 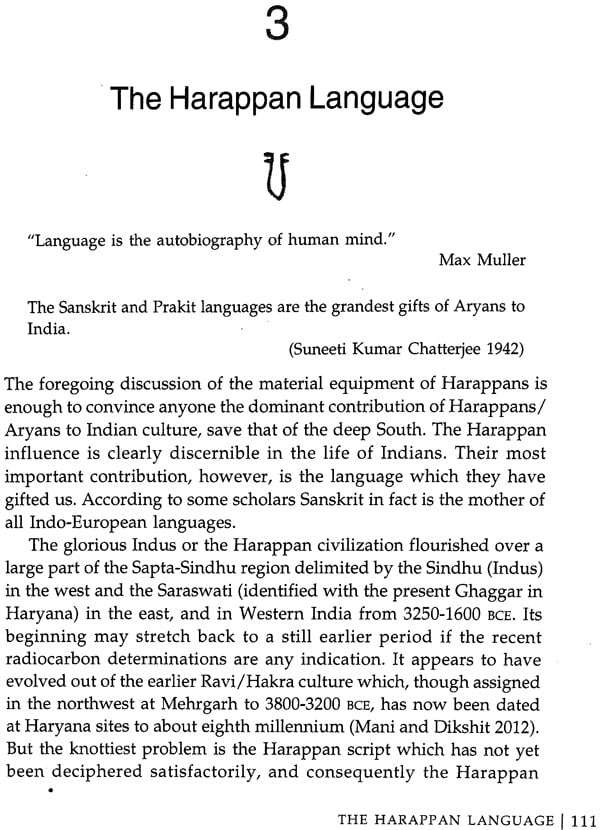 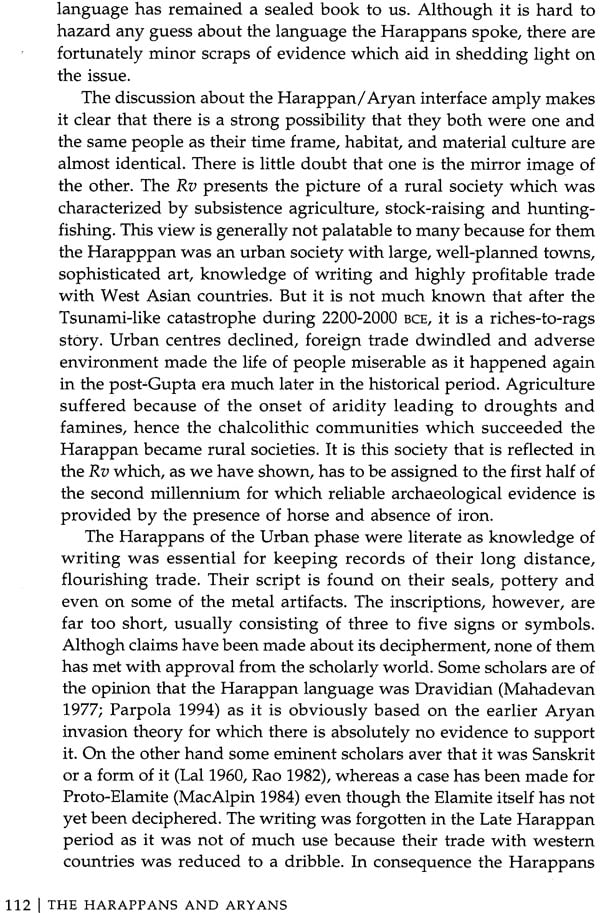 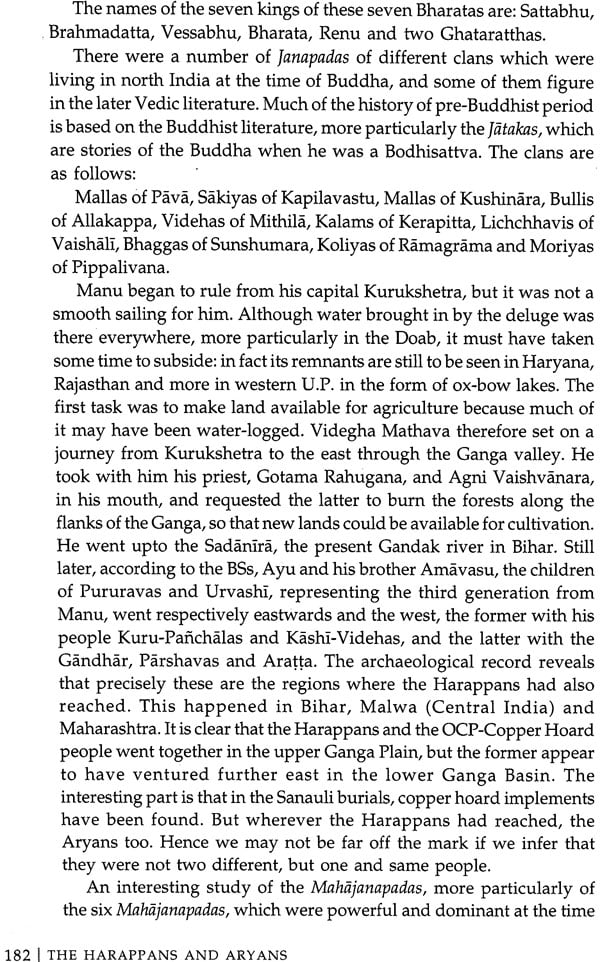 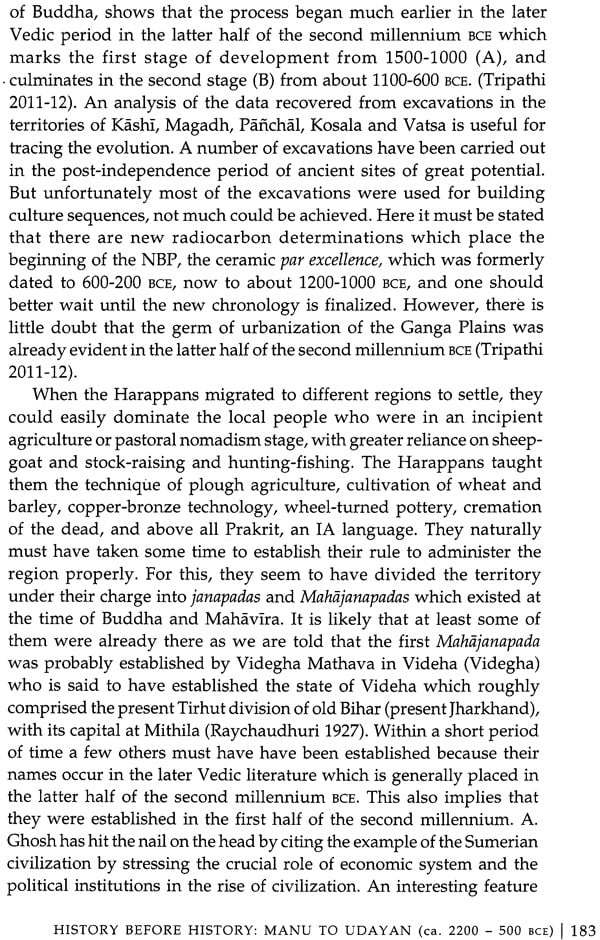 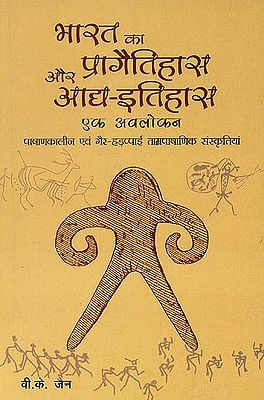 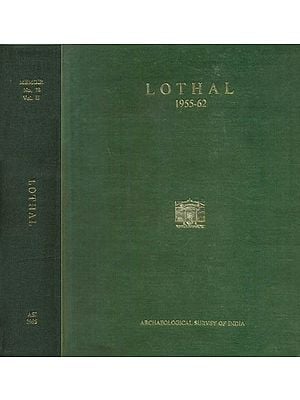 Surviving Harappan Civilisation
By P. C. Kashyap
$29
Out of Stock 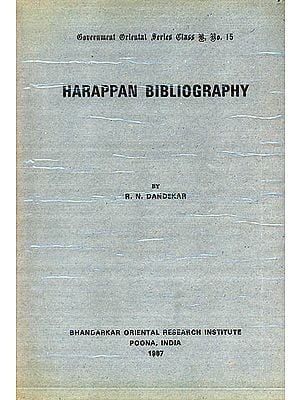 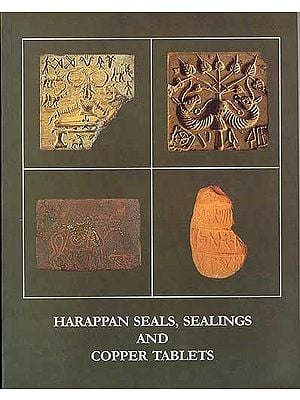 Harappan Seals, Sealings And Copper Tablets
By Deo Prakash Sharma
$23.50
Out of Stock 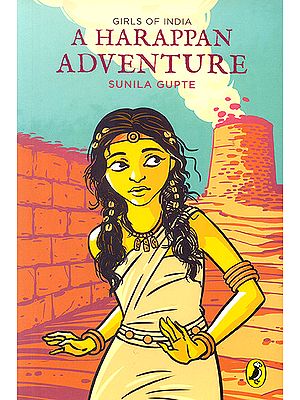