A Guide to Shaktipat

Kundalini Maha-yoga (Shaktipat) is a self-proven and self-perfecting spiritual practice. This means that the Kundalini power causes an initiate to perform kriyas (automatic movements) through the power of Kundalini itself. Therefore, its other name is Siddha-yoga, or "the self-proven path of meditation." It may be relevant to mention that in every aspect, in body, in mind and in intellect, Shakti itself performs the meditation. An initiate must not make any effort at all; one's duty is only to surrender. The time and characteristics of the manifestation of Shakti are solely the work of the divine power (Shakti) itself. To practice this type of meditation means that one must simply allow the divine power the opportunity to perform the meditation by itself.

Of course, Kundalini Maha-yoga (Shaktipat) is different from other paths of meditation, because on other paths you are responsible for performing certain tasks or mastering certain techniques. In other methods of meditation, you may be responsible for performing meditation yourself or you may have to acquire a great deal of knowledge concerning spiritual matters. You may have to perform worship ceremonies, you may have to practice different asanas (yogic postures) or you may have to constantly endeavor to eject undesirable thoughts out of your mind. However: In Maha-yoga (Shaktipat you don' t have to do all these things you just have to sit with a total sense of surrender. Then according to the nature and the state of the spiritual consciousness of an initiate, the different meditative experiences of an emotional, intellectual or creative nature occur by themselves.

The following pages are guideline for the seeker of Truth. Presented in question and answer form, it allows the reader a direct response to many of the questions most commonly asked. In the first chapter the author expounds on the meaning of Shaktipat and the path this spiritual power takes once activated. Explanation is also given on differences among Yoga practices with particular reference to YogaDarshan. Chapter II deals with Shaktipat initiation, what preparations a disciple should make and what initial results he might expect. In the third chapter, certain aspects of a disciples' spiritual advancement are described as signs for measuring his progress. Also a specific outline is presented for the process of freeing oneself of lifes' dualities and ultimately obtaining God Consciousness. Furthermore, answers are given .for ways of dealing with different experiences and thoughts which may occur during meditation. In the fourth and final chapter, questions that come to mind after some time when the spiritual aspirant has gained sufficient experience both inside meditation and during worldly activities are answered. The two types of disciples, house- holder and renunciate, within the Shaktipat system are discussed at length; the purpose and benefits of an Ashram and the definition and the responsibilities of the Guru are also elaborated upon. Specific advice is given for women who are seeking Divine knowledge and in general, the Shaktipat path and how it affects ones course in daily life is clarified.

God has blessed us with His love and knowledge through our most gracious Sat Gurudev Swami Shivom Thirth. Swamiji's under- standing and ability to express God's truth in such a clear and informative manner is a benefit to us all. This is his first book translated to English language. It is hoped that it will help alleviate any barrier that may hinder ones quest for God and give the inspiration needed to allow His light and glory to fill ones heart and soul.

We are thankful to Devatma Shakti Society, Paige Texas (U.S.A.) for the valuable help rendered to us for printing this book. We are also thankful to Mrs. Daya Murthy for collecting funds exclusively for bringing out this publication. Finally, we express our sincere gratitude to Shri Chandrakant Mhaske, an Artist from Bombay who helped us immensely to design the cover page and make necessary corrections.

This book titled' A Guide to Shaktipat' is in your hands in which the day-to-day doubts, difficulties and problems faced by all the Sadhaks and readers have been solved after giving deep thought. I have incorporated the questions asked by Sadhaks whenever I am on tour or whenever they come to the Ashram. Apart from these questions, there may be and there are several other questions that crop up. I have plans to write a series of books on the different approaches to GOD realization /Self-realisation. One book will deal with questions and difficulties pertaining to Yoga. One book will deal with matters connected with 'Bhakti' (Devotional Worship) and another will treat the subject of 'Gyan Marg! In one or two books, the experiences of Sadhaks will be incorporated as reading about others' experiences helps in creating a sense of eagerness or interest to do Sadhana. This book, which is first in the series has the mixture of all the paths.

In fact, Shaktipat is not an independent Yoga or System of Sadhana. Shaktipat is a means of awakening the Shakti towards inner consciousness and to make it perform automatic movements (Kriyas). After the awakening, depending upon the state of the Sadhak's inner world and the changes in it, there is progress in the Kriyas (automatic movements) and changes in them. Just as when Sanskar (accumulated seeds of past actions) pertaining to Bhakti are aroused Kriyas pertaining to Shakti occur so also when Sanskar in respect of Hatayoga are aroused, Kriyas pertaining to Hatayoga occur, and so also when Dhyan Yoga Sanksar are aroused Kriyas pertaining to Dhyan Yoga occur. In this way all types of Sadhana, Upasana and Yogic practices are assimilated in this path. That is why this Sadhan is called 'MAHAYOGA' as it has the mixture of Mantra, Hath, Laya, Raja, Bhakti and Gyan Yoga and Karma and which is manifested in the Sadhak at different times depending on the different state of the inner "Chitta" (mind stuff.). Sadhan is dependent on two things; one depending on the past deeds, Kriyas occur and secondly on the basis of 'tatwa'. The past deeds of each one are different. Inter, alia Kriyas also differ. As the 'Chitta' gets purer, Kriyas start to rise, above the past deeds and are manifested on the basis of 'tatwas'. In the middle there comes a stage when according to his past deeds Kriyas occur depending upon the tatwas. That is why these Kriyas are different from each other. As and when Kriyas occur depending upon the tatwas, his Kriyas will resemble those of the other Sadhaks of the same status. This point has not been elaborated in this book. In the series of books to be published attempts will be made to throw light on the above.

Some Sadhaks have funny thoughts in their mind and these thoughts are so deeprooted that it is very difficult to up-root them. Just as some Sadhaks believe that when Shakti is awakened it rises from Mooladhar (first chakra which corresponds with the pelvic plexus of the sympathetic nervous system) towards Sushumna (subtle central current running through the spinal column) in zig zag manner. Such Sadhaks are believed to have said that they have seen a snake in the Sushumna as if there is a snake within them. So also there are peculiar ideas about the petals of the flowers present in each 'chakra' as if these flowers are hung in the body. They also do not understand the alphabets written on these petals. If the alphabets etc. are written on them how can a Japanese, European or American Sadhak read them. Matters relating to Yoga have also to be discussed which will be attempted in the next book in the series.

By thinking on any topic or concentrating on any subject, the seeds of the subject or object get embedded in us. Doing prayers, japa, meditation upasana going on piligrimage, reading or recital etc. which gives one pride that 'I am the doer' are all covered in this Sadhan. In this Sadhan, the accumulated seeds of past action (Sanskar) from outside are accumulated in the 'Chitta'. For example if any Sadhak meditates and does Japa of either Shankar, Krishna or Devi when his thoughts mature, the Sadhak sees the worshipping diety within him- self which is nothing but the interplay of his accumulated seeds of past action and is happy.

The other Sadhan is to wean out or remove from within these accumulated seeds of the past action which is possible only when the divine Shakti turns inwards and becomes active. At this point one should give up the prayers or meditation wherein you forcibly concentrate, and surrender to the Divine Shakti and sit for Sadhan. Doing Japa, meditation and prayers with a purpose will again fill the "Chitta" with further seeds of action, when the purpose of Sadhan is to wean out the accumulated seeds of past action to make it (Chitta) pure. It should be remembered that as long as seeds pertaining to 'Tamoguna', 'Rajoguna or 'Satwaguna' are within the 'Chitta' it will be impure and engulfed by the above qualities. When the Shakti is directed to- wards the inner consciousness, it cleanses the soul of the accumulated seeds of past actions (Sanskar). In this book, discussions on the above have been done at random. However it is necessary to elaborate on this issue.

To ponder on the above issue as also several others and to teach a definite goal is of paramount importance to a Sadhak. These shall be dealt by me in the forthcoming series of books. It is hoped that what- ever has been written in this book, the Sadhaks will read and seriously think it over and try to understand the same which will help in one's progress in Sadhana. With prayers that God will protect love and devote himself to all living beings. 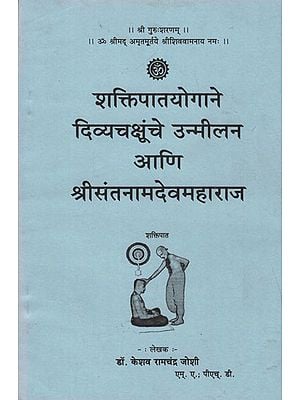 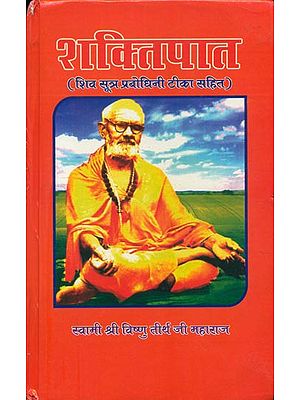 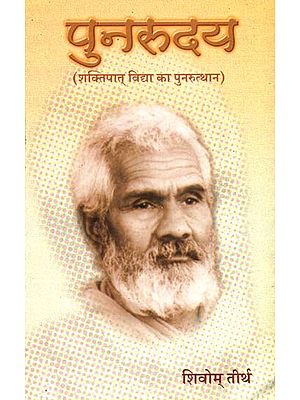 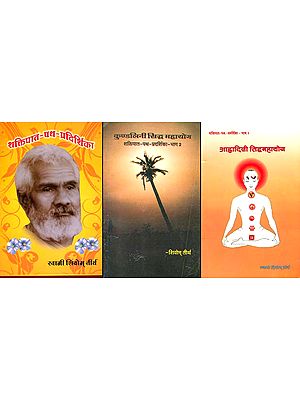 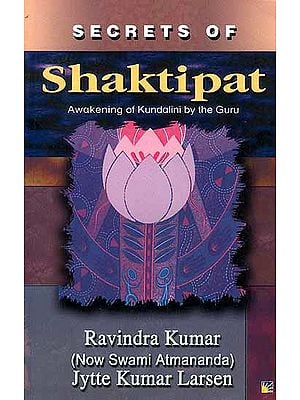 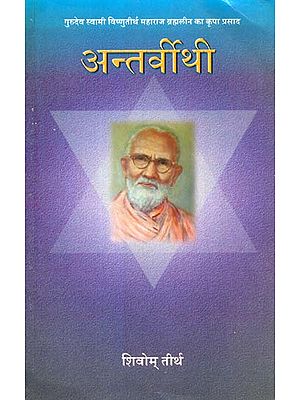 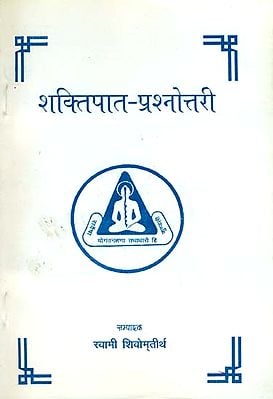