Gorakshanath's life and works were of an extraordinary nature. He was not born from union of male and female as in the normal course. His works were also divine. Many foreign scholars have also shown interest in his extraordinary life and character and made them a subject of their researches and written about them extensively. (See Griersan, Brigs, Teshitri, etc.). This small book attempts to give some idea of a towering figure of the Indian spiritual culture. It contain particular mention of the extraordinary attainments (siddhis) of yoga sadhana will quench the thirst of many seekers and provide them some useful guidance.

Swami Rajarshi Muni was born on 11th February, 1931, in Porbandar, in western Gujarat, in the princely lineage of the Jadeja rules of Kutch. He received sannyas initiation in February 1971 and thereafter devoted himself almost exclusively to secluded Yoga sadhana of the khechari mudra expounded and practiced in the modern spiritual tradition of Lord Lakulish, twenty-eight incarnation of Lord Shiv, in which he is the present spiritual head. In 1993, in response to a spiritual calling, he temporarily interrupted his self-imposed seclusion undertake a worldwide campaign to spread the knowledge of Yoga and the moral, cultural spiritual values of the Sanatan (eternal) Indian heritage. He resumed secluded sadhana in 2007 to complete his Yoga and establish the authenticity of the principle of the indestructible Divine Body, on which he has written with profound clarity and authority based on personal practice experience. He is an advanced yogi, a realized Master in the classic mould of Indian adepts, knower of the kundalini and master of the khechari mudra. The extraordinary heights he attained in his Yoga practice establish him firmly as the latest addition to the lineage of perfected masters which has long embellished the Indian spiritual tradition.

The position of the Nath lineage is considered supreme in the annals of spiritual practice in the Sanatan Dharm of India. The Nath lineage is believed to have originated from the Adinath (Primordial Master) Lord Shiva in whose lineage there are believed to have been nine Naths and eighty-four Siddhas (perfected Yogis, adepts). Historians place the date of all of them in the Middle Ages from the ninth to the fourteenth century. Nath pilgrim places, temples, spiritual seats, ashrams, caves and mounds are seen all over India even to this day which serve as a reminder of a glorious past. Many tales about the extraordinary yogic accomplishments of the Nath Yogis may still be found on the lips of the people. They are at the heart of popular folk tales concerning the Nath Yogis.

Matsyendranath and Gorakshanath (Guru and disciple) command the leading position among the siddha Yogis of this lineage. It is believed that Adinath Shiv himself was Matsyendranath's Guru, while he, Matsyendranath, was in turn Gorakshanath’s Guru. In this pair of Guru and disciple, Gorakshanath has commanded greater popularity and influence. Many Mahatmas of the Nath lineage consider Gorakshanath an incarnation of Lord Shiv. Their argument is that in a text of their lineage named Mahakalyoga Lord Shiv has stated: "I am Goraksh. Consider that as my form. I have taken that form for the propagation of the path of yoga." Whatever truth there may or may not be in this, what is certainly true is that Gorakshanath was a great Siddha Yogi and was master of many divine siddhis and spiritual attainments. His life was one of astonishing miracles and these may still be found recorded in various biographies and folk tales. His life's work was not limited to India alone; his influence extended to others nations of the Asian sub-continent, including Nepal, Afghanistan, Sind, Tibet and Simhaldesh (present-day Sri Lanka).

One section of the Nath lineage believes that Gorakshanath is not born of human womb and is a siddha Yogi" with an immortal body who manifests in each of the four Yugas. He manifested in the Peshawar province of Punjab in the Satya Yuga, thereafter in Gorakhpur in Uttar Pradesh in Treta Yuga; in Dwapar Yuga, he manifested at Harmuj, which is farther away than Dwarka on the western coast of India and now under the sea, and in Kali Yuga he appeared a Gorakhmadhi on Girnar Mountain in Saurashtra area of Gujarat. It is believed that in Dwapar Gorakshanath was a contemporary of Lord Krishna. Raja Mansinghji of Jodhpur (1783-1843) who is himself well known it Rajasthan as a bhakt Yogi", has mentioned in his "Shrinath Tirthavali" that "Gorakshanath had done the Kankan bandhan at the marriage of Lord Krishna with Rukmini in Prabhas Kshetra (territory).’

Even if we do not go into the veracity of all such prevalent beliefs, it is clear enough that both Gorakshanath's life and works were of an extraordinary nature. He was not born from union of male and female as in the normal course. His works were also divine Many foreign scholars have also shown interest in his extraordinary life and character and made them a subject of their researches and written about them extensively.

It is normal that the public should be interested in the life of Gorakshanath, but yoga sadhaks will be particularly interested in the path of Sadhana delineated by him. Gorakshanath left nothing to be desired even about this matter. He wrote many books on the subject in the Sanskrit language. They include Goraksh Shatak, Goraksh Samhita, Goraksh Kalpa, Goraksh Sashtra, Yogasiddhant Paddhati, Siddha-siddhant Paddhati, Hattha Yoga Samhita, Yoga Chintamani, Yogamartanda, Amanask Yoga, Yogabij, Pranasankali, Goraksh Gita, Vivek Martanda, Gyanamrit Yoga, Gyanprakash Shatak, Maharth Manjari, Shrinath Sutra, etc. In addition, collections of his compositions and bhajans (devotional songs) in the lingua franca (Hindi) are also found. This gives a good indication of his path- finding contribution.

This small book attempts to give some idea of a towering figure of the Indian spiritual culture. It will be found to contain particular mention of the extraordinary attainments (siddhis) of yoga sadhana. I hope it will quench the thirst of many seekers and provide them some useful guidance. 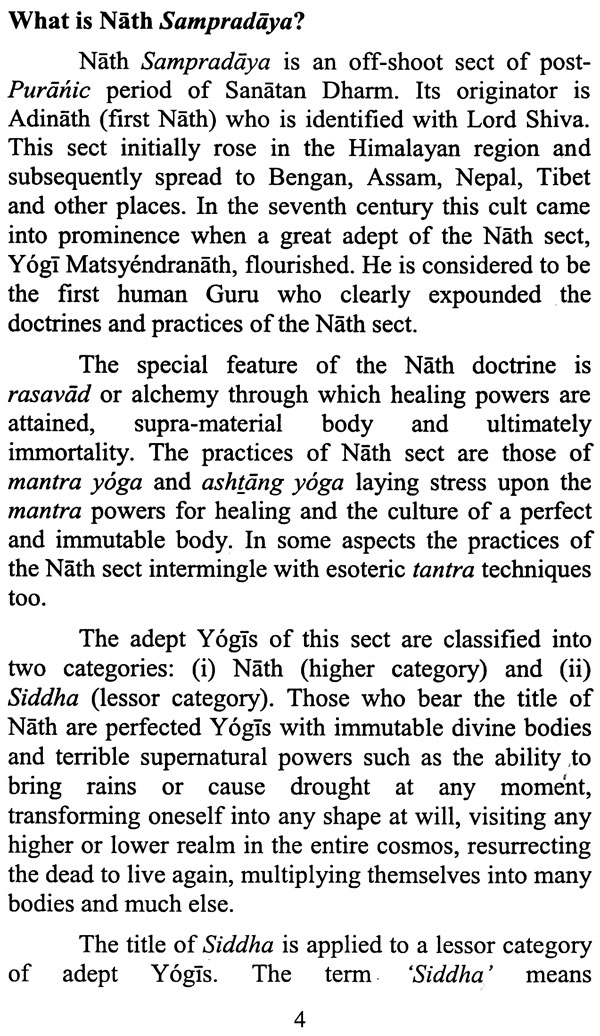 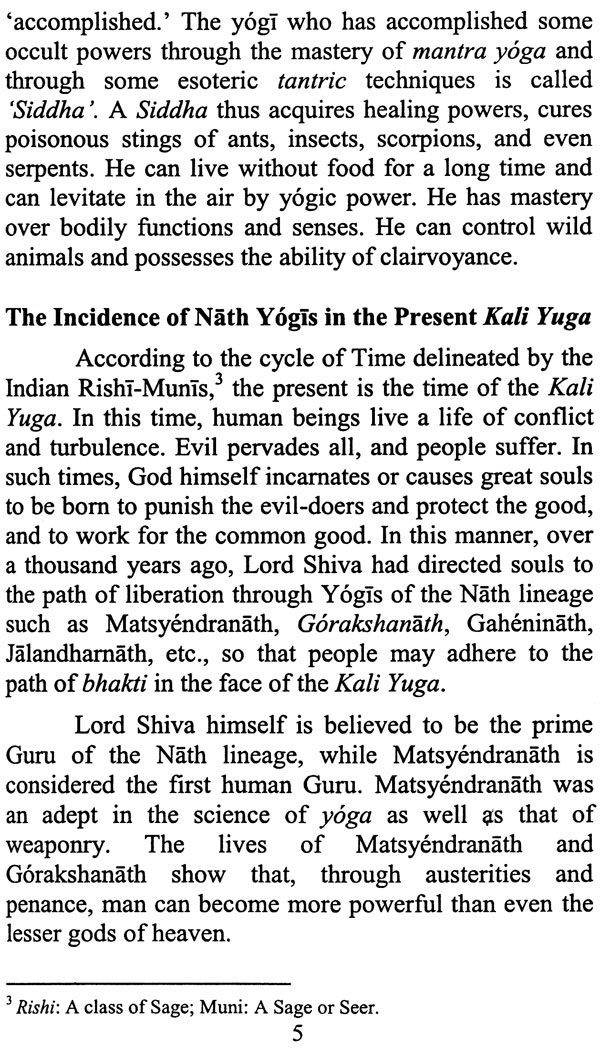 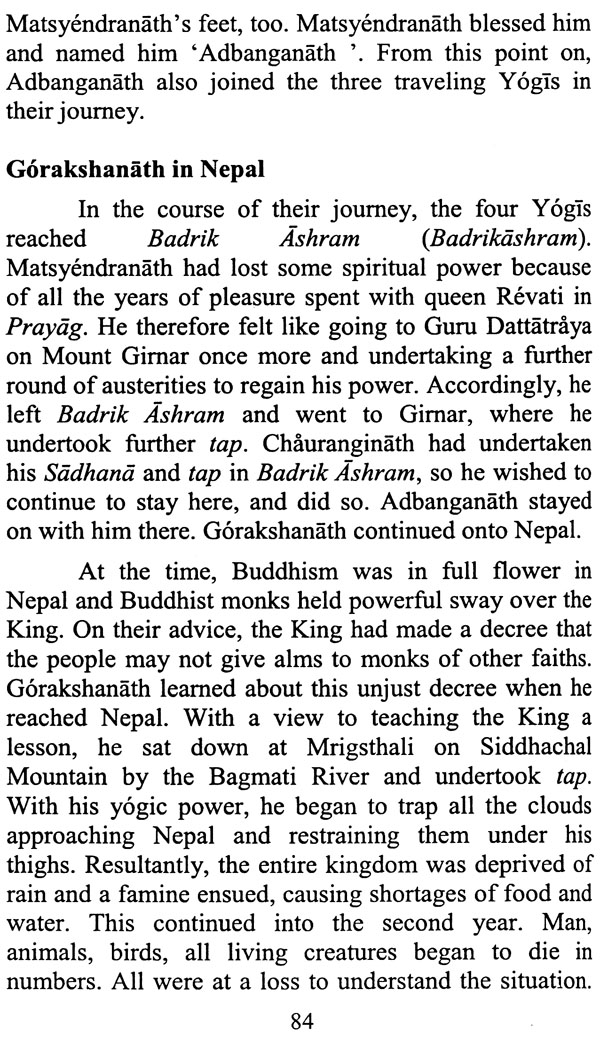 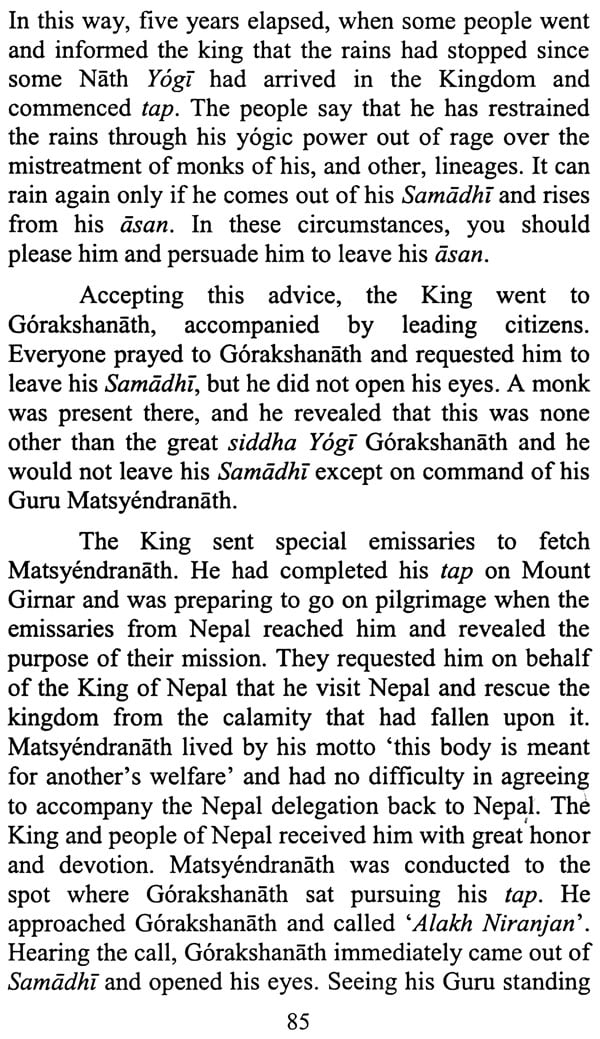