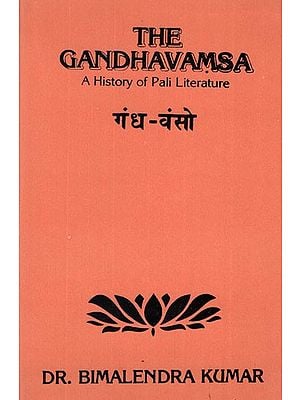 The Gandhavamsa, which is non-canonical Pali work of seventeenth century A.D., is a recognised work of traditional history of Pali literature. It discusses the brief history of Buddhist canons and modern Pali works. For knowing the history of Pali books treasure, this text is very useful A very beautiful picture of the scholars who contributed towards the development of Pali literature, may be seen through it. This text gives us little information as to the period of the works but its help is most useful in settling some problems of authorship and place. in this way, though it is a small and important book, it furnishes the continuous flow of development of Pali literature.

The idea of preparing a critical edition of the small Pali text came to me, when I submitted my thesis for Ph.D. course in 1989. After having pondered over the materials, I found that the Gandhavamsa is small non-canonical text, which is immensely useful for research scholars and students. A plan, accordingly, was thought to prepare a critical edition of this text in Devanagari script with an exhaustive introduction in English. I transcribed this text from Roman script into Devanagari script in 1989 itself. But, every thing takes shape at its own time of fruition, guided by some unseen action force. Due to some circumstances, I remained engaged in other academic and research activities and could not find time to devote myself for editing of this text. In the beginning of last year, the editing of this text was started under the noble guidance of Prof. Mahesh Tiwary.

The Gandhavamsa had been edited in Roman characters for the first time by Professor Minayeff of St. Petersburg and was published in the Journal of Pali Text Society (J.P.T.S.) for the year 1886. The text was found in Burma and had been edited with the help of two manuscripts, written in Burmese character. The first manuscript contained besides the Pali text a translation into Burmese. It belonged to the author of the translation-the monk U-Khyen or Muninda, at Schwedowg, near Prome. It consisted of twenty-seven leaves. The second manuscript contained twelve leaves and only Pali text without translation. It was full of clerical errors. The Roman edition of the text was mainly based upon the first manuscript. The additions of another manuscript, being corrupted, were given in the foot notes.

In course of editing in the Devanagari script, the varients, which were more helpful in clarifying the meaning of the concepts, were adjusted in the body of the text and rests have been included in the foot-notes. I am really grateful to the editor, for utilizing the text for making the present one more useful and accessible.

Attempt has been made to make the text understandable to modern mind, more acquainted with new techniques of research activities. For the purpose, the name of the chapter and the main subjects discussed theirin have been indicated first. Thereafter, the details of the contents have been exhibited under the headings and sub-headings with different size of letters. The verses of the text have been numbered serially. Punctuations as accepted in modern technique of editing and specially as followed in the publication of the critical edition of Pali Tipitaka and Atthakathas by Nava Nalanda Mahavihara, Nalanda, has faithfully been followed in this text. In the margin, the page numbers of the Roman version of the text have been given with the abbreviated symbol R. It is for easy reference to this version as well as for the critical awareness of the various readings.

It is a matter of great satisfaction that Pali is being taught at different levels in University education. Students are also taking interest in going deep into the original sources for having a clear understanding of the various concepts. Sometimes, they are found enquisitive to know the historical development of the Pali literature. They also seek information about an original text dealing with the problem. As a fulfilment of such enquiries, it was planned to bring out a critical edition of the Gandhavamsa, a treatise dealing with the history of books. Dr. Bimalendra Kumar has taken up this issue and making right efforts in preparing the critical edition of the text, has brought out the text with exhaustive introduction. He deserves my heartly congratulations for his commendable work.

Today, I am really glad to have the critical edition of the Gandhavamsa with its introduction. I have belief in the potentiality of Dr. Bimalendra Kumar and hope that he will continue his efforts in bringing out the critical edition of the useful Pali texts in future. I bless him for his bright future and a peaceful life devoted to preserving the Pali tradition in India.