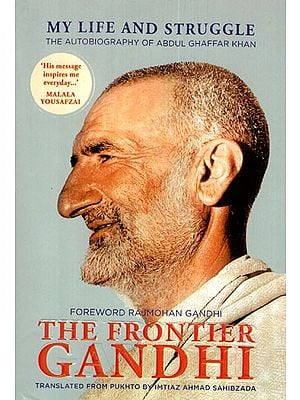 The Frontier Gandhi: My Life and Struggle- The Autobiography of Abdul Ghaffar Khan

Khan Abdul Ghaffar Khan (1890-1988), affectionately known as Bacha Khan, Badshah Khan and Fakr-e-Afghan among his people, and 'Frontier Gandhi' in India, was born in Uthmanzai in the North-West, Frontier Province of British India. His life was dedicated to the social reform of the Pukhtuns and he continues to be revered across the world by them. In India, he is known for his close association with Mahatma Gandhi and his leadership of the Khudai Khidmatgar (Servants of God) movement from 1930-47 - the most successful and sustained Gandhian non-violent campaign anywhere in the world.

Khan Abdul Ghaffar Khan (1890-1988), affectionately known as Bacha Khan, Badshah Khan and Fakr-e-Afghan among his people, and 'Frontier Gandhi' in India, was born in Uthmanzai in the North-West, Frontier Province of British India. His life was dedicated to the social reform of the Pukhtuns and he continues to be revered across the world by them. In India, he is known for his close association with Mahatma Gandhi and his leadership of the Khudai Khidmatgar (Servants of God) movement from 1930-47 - the most successful and sustained Gandhian non-violent campaign anywhere in the world. The Khudai Khidmatgars or 'Red Shirts' were key allies of the Congress who formed three governments in the NWEP despite brutal opposition from the colonial regime.

Badshah Khan's success in creating a disciplined non-violent movement in a Muslim and Pukhtun context that emphasized justice, courage, respect for women and pluralism, continues to inspire today.

This is the first time that his autobiography is available in English. His candid style brings to life events and personalities of the independence movement as he records the untiring energy and sacrifices that went into winning freedom.

The original Pashto edition was first published in 1983 in Afghanistan when he was 93 years old. Subsequently, the book was also published by the Baacha Khan Trust in Peshawar, Pakistan. (An earlier account of his life, also titled My Life and Struggle was published in 1969 but this was based on interviews conducted with him and not his written autobiography.)

This translation was done by Imtiaz Ahmad Sahibzada at the request of Shandana Humayun Khan. Shandana's maternal greatgrandfather was Qazi Ataullah, a close lieutenant of Bacha Khan's and a key figure in the Khudai Khidmatgar movement.

Born in 1936, Imtiaz Ahmad Sahibzada, joined the erstwhile Civil Service of Pakistan in 1959. After serving in a number of assignments in the Provincial bureaucracy of the province of Khyber Pakhtunkhwa, which included that of the Chief Secretary, he was transferred to Islamabad in 1987. There he served as Secretary to the Federal Government in different ministries and superannuated in 1996 as the Cabinet Secretary. Thereafter, he went on to become a member of the Federal Public Service Commission, a member of the National Security Council, Chairman of the Federal Lands Commission, Wafaqi Mohtasib (Ombudsman) of Pakistan and Advisor to the Prime Minister on Tribal Affairs. He finally retired from public service in 2008. He is the author of the Pilgrim of Beauty and A Breath of Fresh Air. The former contains translations into English of selected poems of the famous Pukhtun poet, Ghani Khan, who was Ghaffar Khan's son. The latter is a compilation of the speeches and interventions of Ghani Khan in the Central Legislative Assembly of India, 1946. Imtiaz Ahmad had a close friendship with Abdul Ghani Khan, who is the greatest Pukhtun poet of the century, was an artist and also a Member of the Indian Legislative Assembly in 1946-47. He first met him in 1947-48 and remained closely associated with him until his death in 1996.

In earlier generations, Indians called him Khan Sahib' or 'Badshah Khan'. Many spoke or wrote of him as “the Frontier Gandhi’. Hindispeakers called him “Seemaant Gandhi'. However, ‘Bacha Khan’ is how Pakistanis referred to him and still do.

If many could not remember Khan Abdul Ghaffar Khan's full name, no one who saw him, whether directly or in a photograph, could forget his towering appearance. In my biography of him, first published in 2004,' I recalled Badshah Khan’s ‘immensely tall figure, absolutely straight back, great nose, kindly eyes, and permanent air of nonviolent defiance'.

He died in 1988. It would have been an amazing privilege to present my biography to him. Instead of that, I am being asked to write a foreword to his autobiography! The honour humbles me. It makes me want to hide.

I hope nonetheless that many Indians, Pakistanis and Bangladeshis – and others too – will pore over this indispensable piece of our subcontinent's history.

Collaboration across the India-Pakistan-Afghanistan border has produced this book, with a leading Indian publisher bringing out a text created in Pakistan about our joint recent history. How wonderful.

Here is my understanding of how the Pashto original of this text was born. Badshah Khan seems to have dictated his story, from birth to the 1947 creation of Pakistan, in 1965, when he was living in exile in Kabul. He was 75 then.

Since he lived until 1988 (reaching the age of 98), missing from this autobiography are forty-one years (from 1947 onwards) of Badshah Khan's life. That was a substantial chunk of time, during which interesting things continued to happen to, through and around Badshah Khan. Readers should be aware of this absence.

Badshah Khan dictated the story in his language Pashto (also spelt Pakhto or Pukhto). This translation into English is the painstaking work of a distinguished Pakistani civil servant, Imtiaz Ahmad Sahibzada, now in his eighties, who has also translated some of the brilliant poetry of Badshah Khan's eldest son, Ghani Khan.

In 2003, when I was working on my biography of Badshah Khan, I had the good fortune to find, in a library, a previous English version” (published in 1969) of an autobiography by him. Therein it was stated that Badshah Khan had dictated the story of his life – in Pashto, in Kabul – to Kanwar Bhan Narang, a former Frontier Province legislator who was living in Kabul at the same time, and that a woman named Helen H. Bouman had translated the text into English.

Though I do not know it for a fact, it seems likely that the Pashto text from which Imtiaz Ahmad Sahibzada has produced this English translation is connected to the text that led to the 1969 book. However, the story emerging in this translation, while remaining confined to the pre-1947 period, seems fuller than what the 1969 book presented, and I note that Badshah Khan appears to have given a 1981 date to this text.

I do not know how many days Badshah Khan took to dictate his story. Whether, while dictating it, he had papers and books to consult is also not known, although towards the end he refers to Maulana Abul Kalam Azad's account of the acceptance of Partition, which we know was offered in Azad's India Wins Freedom, first published (a year after the Maulana's death) in 1959. 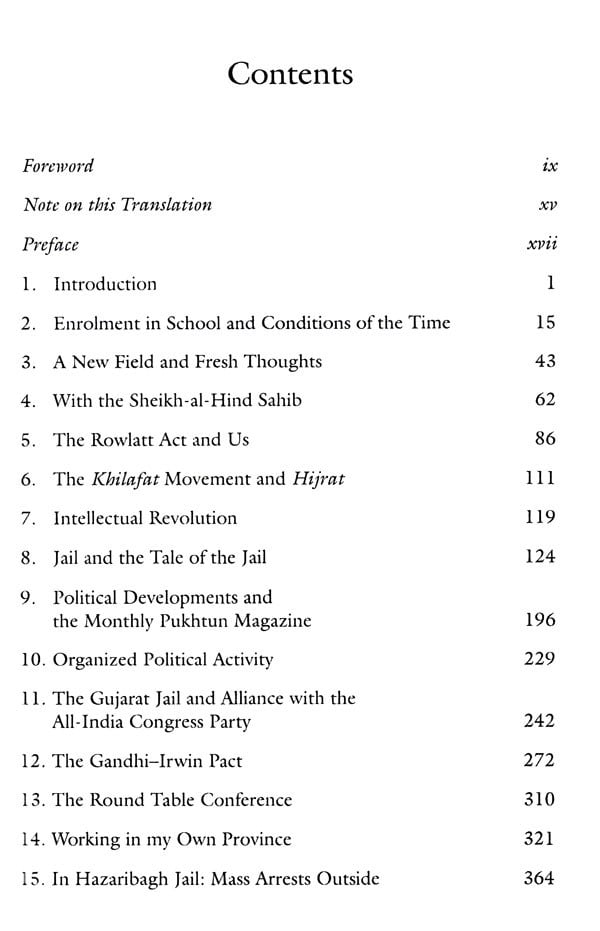 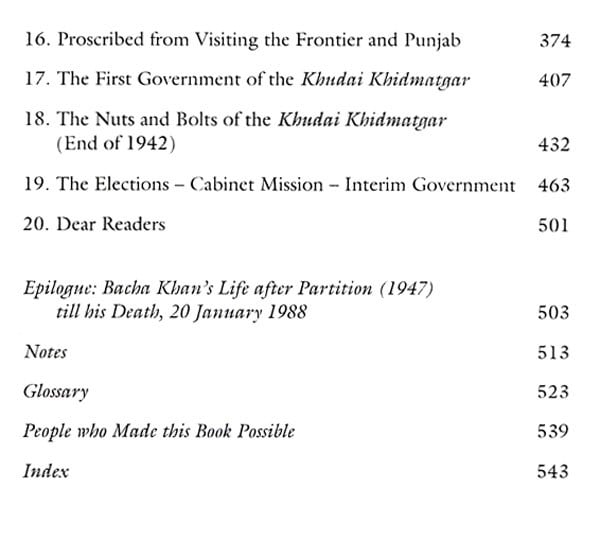 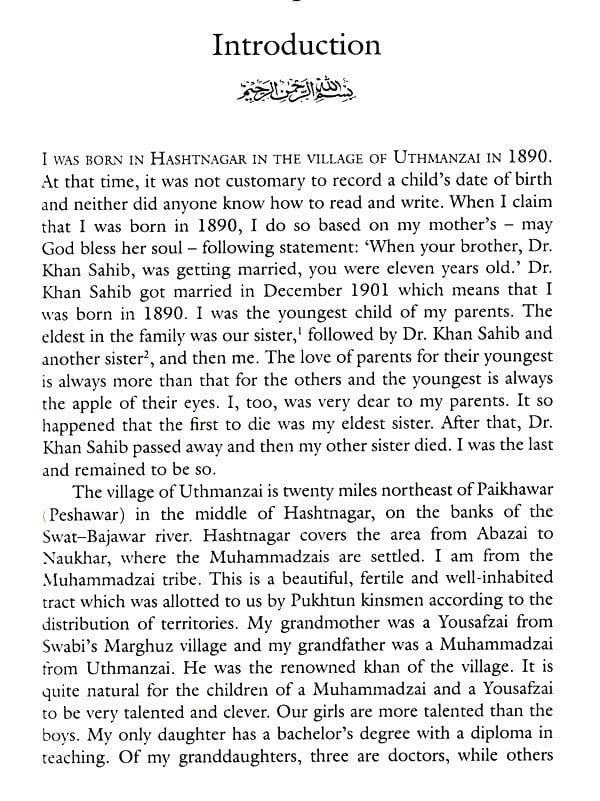 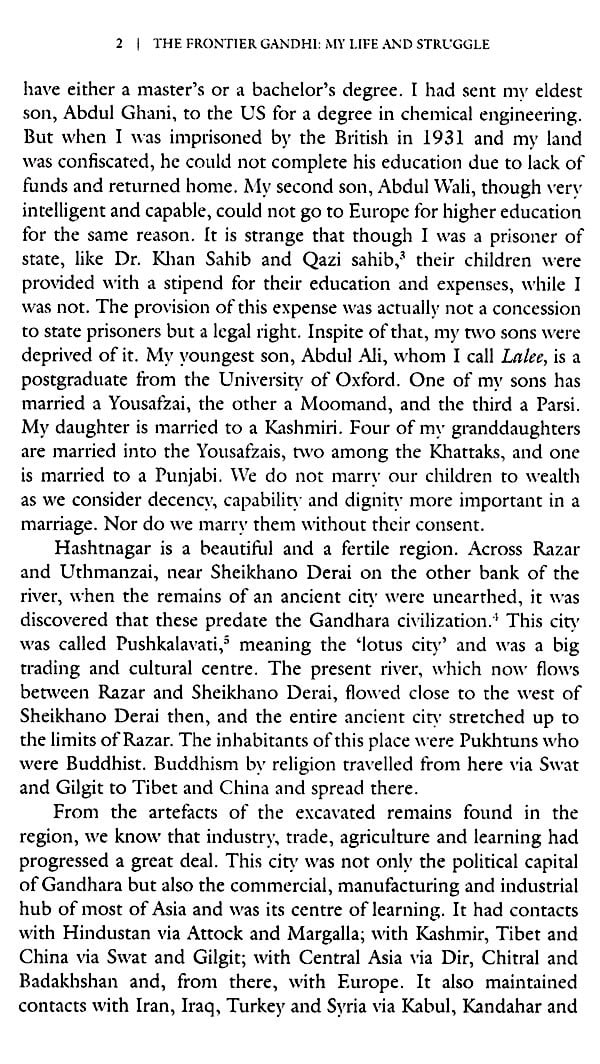 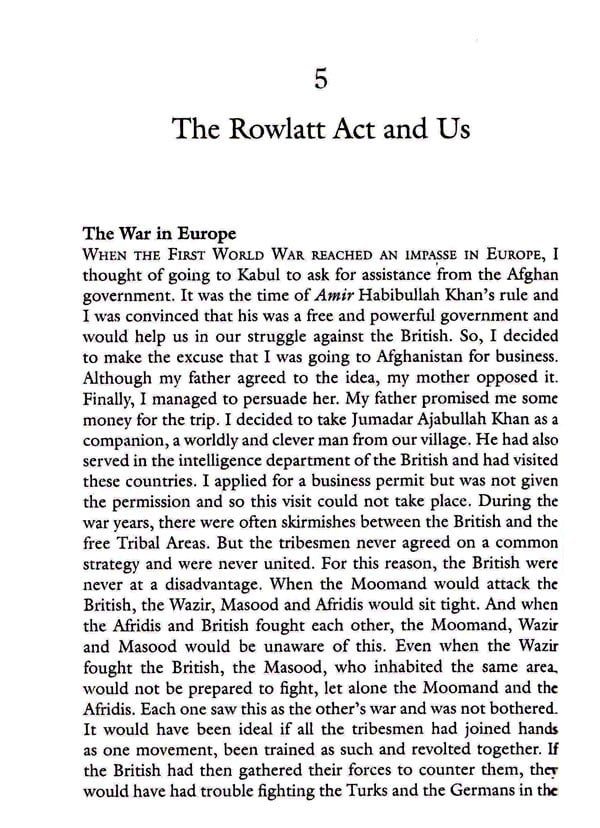 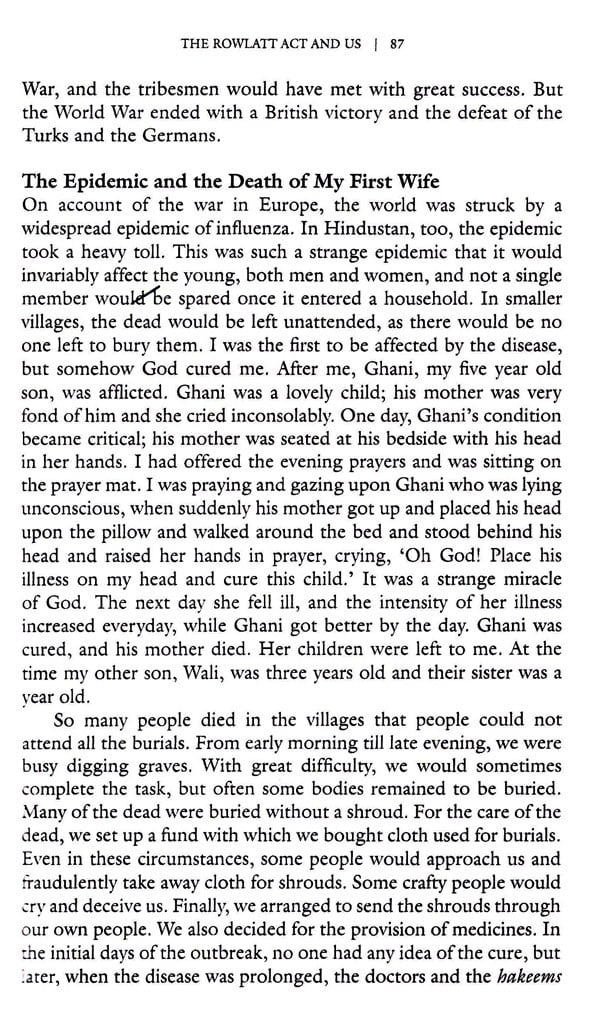 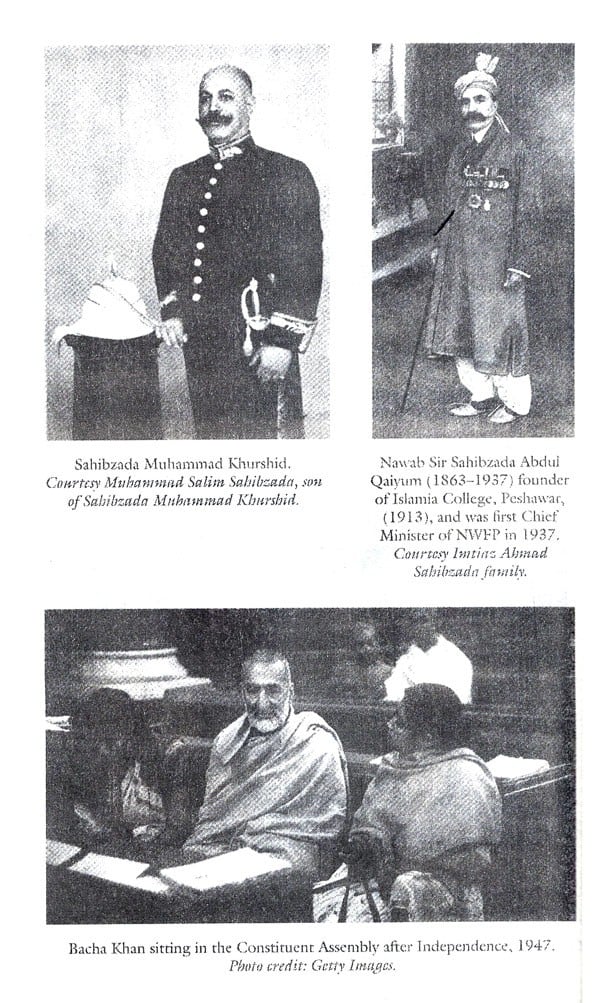 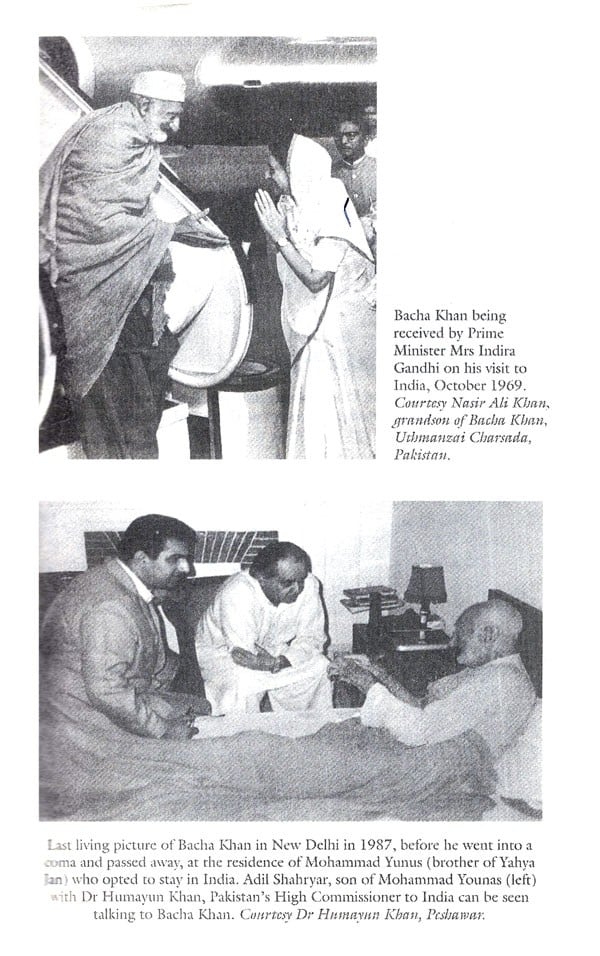 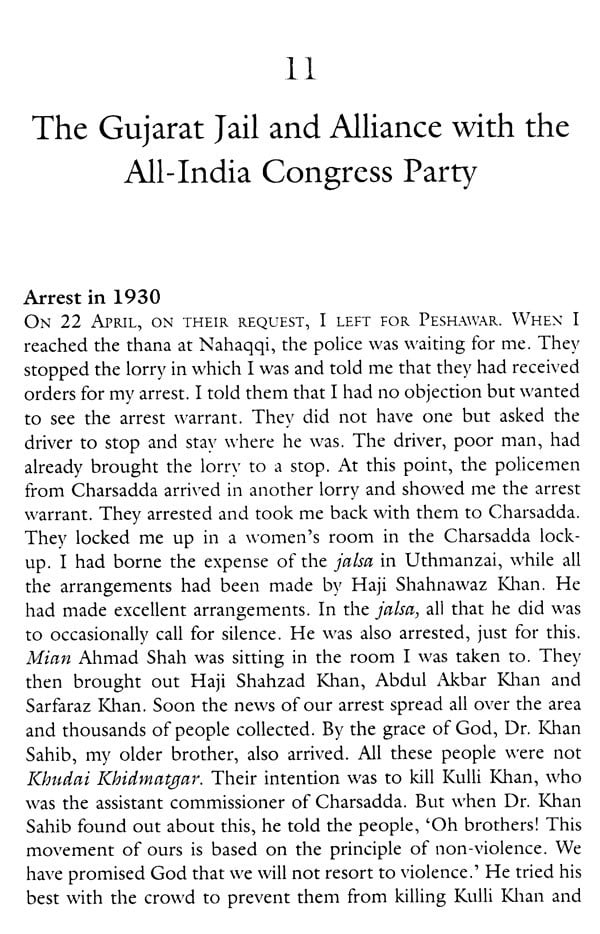 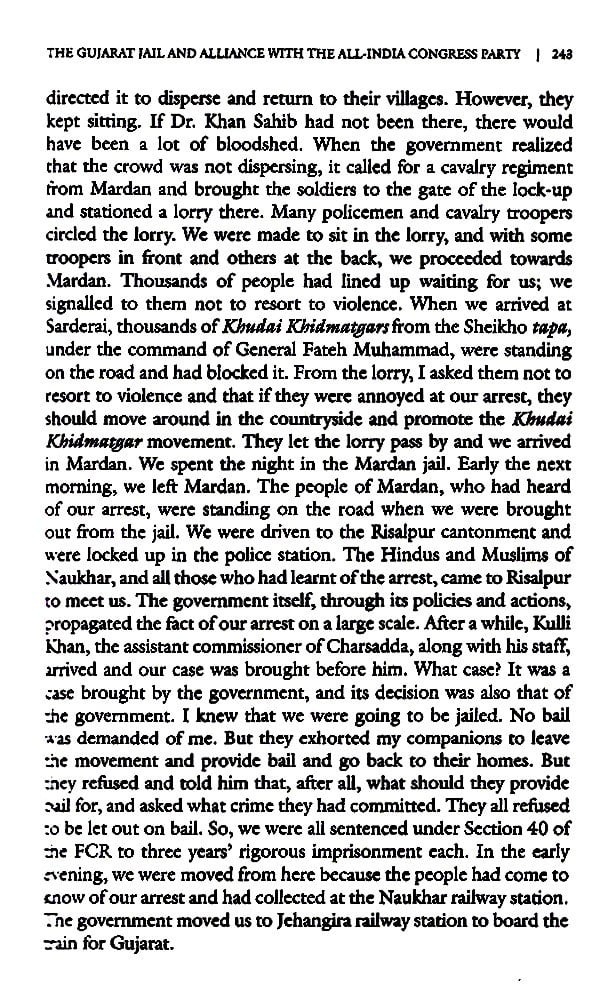 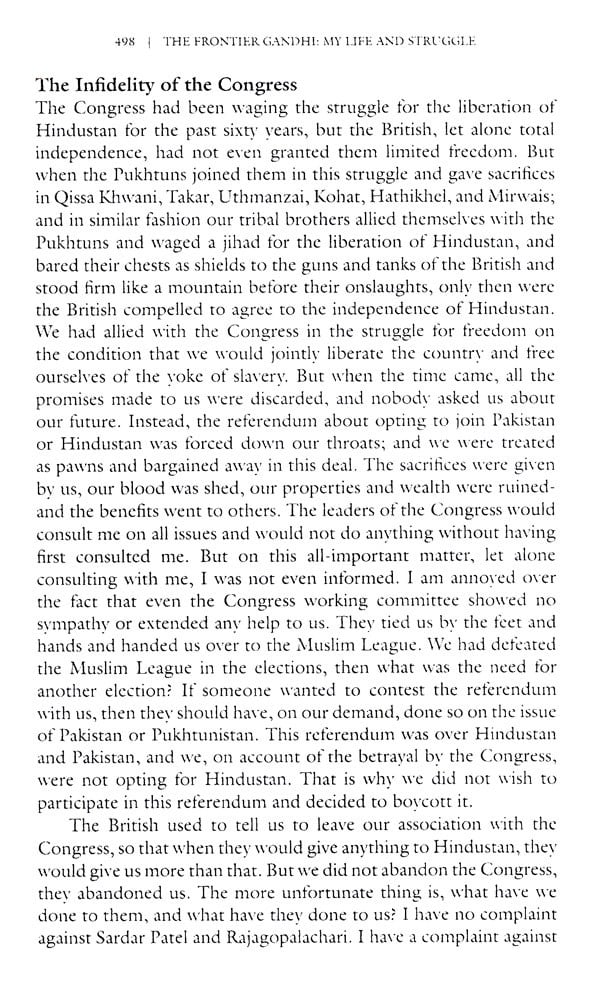 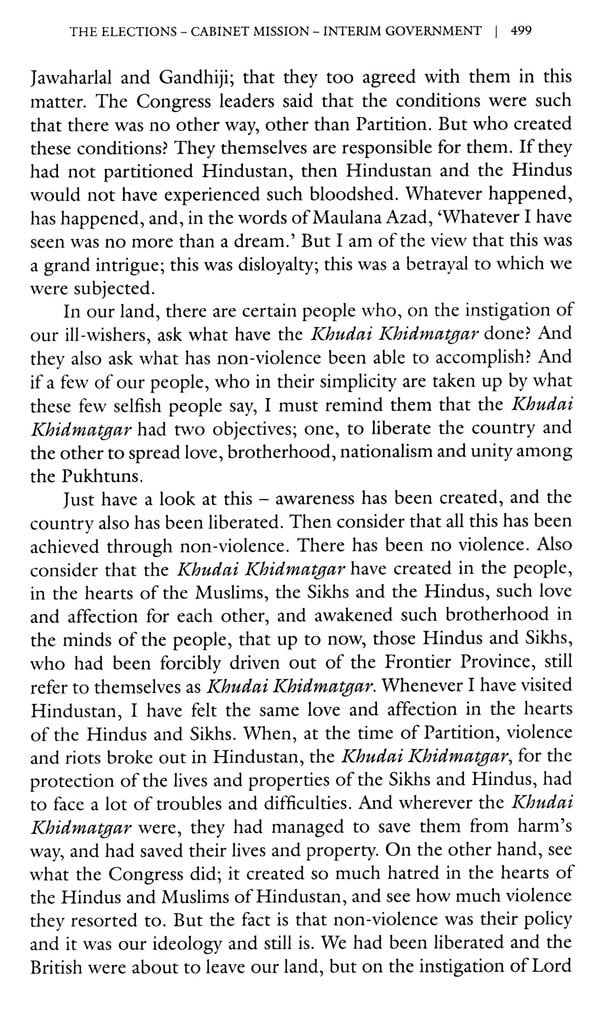 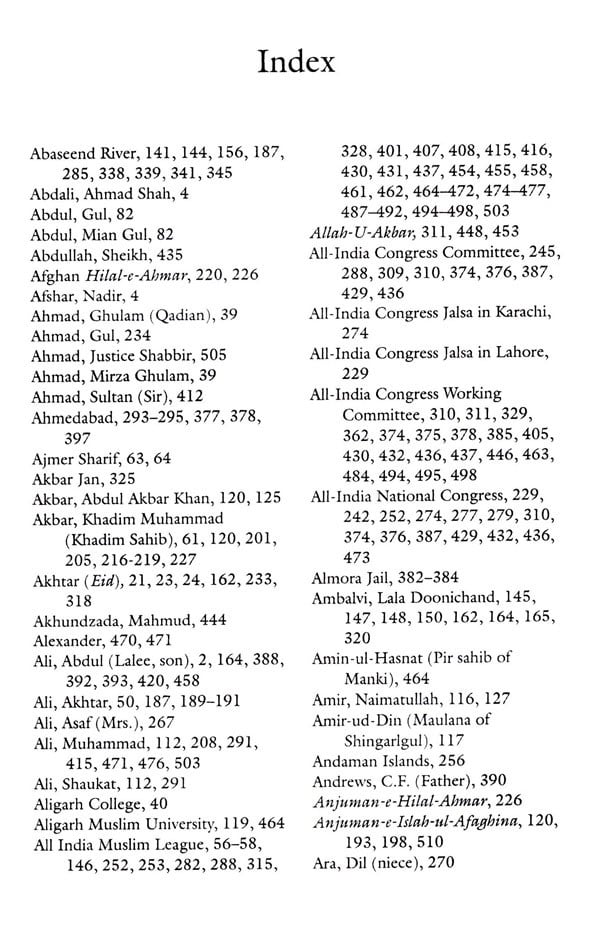 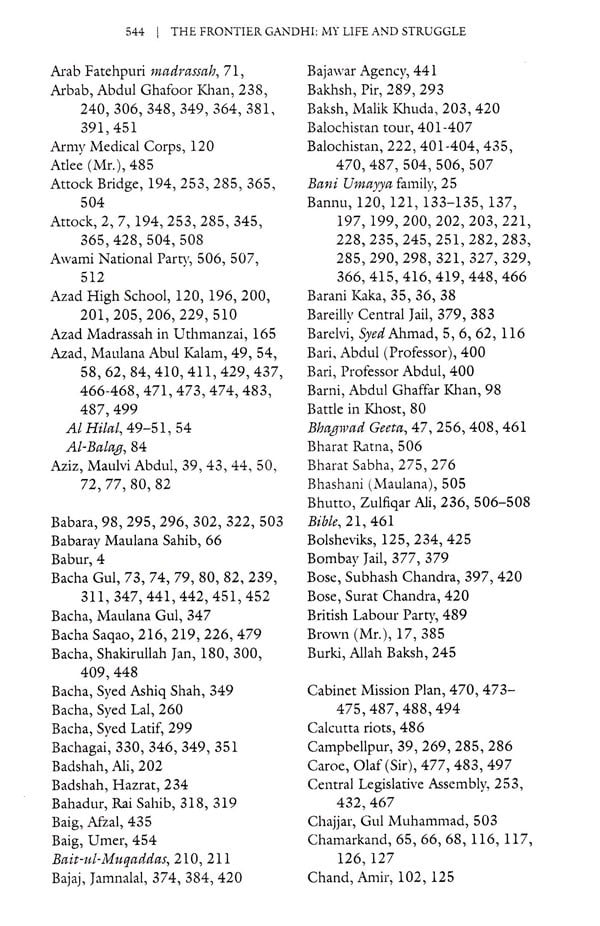