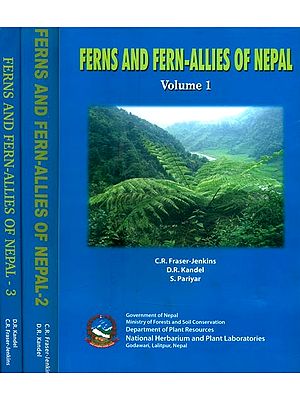 Ferns and Fern-Allies of Nepal (Set of 3 Volumes)

FREE Delivery
$295
Quantity
Usually ships in 15 days
Notify me when this item is available
Foreword
It gives me immense pleasure to look into the comprehensive account of the Ferns and Fern-allies of Nepal written by a renowned pteridologist Mr. Christopher Roy Fraser- Jenkins. I feel very glad that the Department of Plant Resources has taken initiative to collaborate with the principal author and publish the book. The ministry has felt the need of updating the checklist of all flora and fauna of Nepal. That way the government would enrich its data on the biological resources of Nepal and fulfilling the international obligations such as the Convention on Biological Diversity 1992. I hope the publication of this type of book will certainly fill the gap of knowledge of scientific community as well as general readers.

The Department of Plant Resources has been engaged in studying and publishing books on the Nepalese flora since its establishment, with the major aim to complete the publication of the Flora of Nepal by 2020. Publication of Ferns and Fern-allies of Nepal is a step towards achieving the goal of completing the documentation of floral wealth of Nepal. A country like Nepal which is well known for its biodiversity, can boost its economy by developing proper technology and products concerning its biological resources. I urge the scientists and other management staff of the Department of Plant Resources to develop innovative technology based on fundamental scientific researches.

I express my appreciation to the authors of the book that has carried out this splendid work. I also appreciate the pioneering effort of Mr. Yam Bahadur Thapa, Director General of the Department of Plant Resources. The scientists who have contributed their valuable time and resources while collecting the herbarium specimens from many localities of Nepal deserve our special appreciation. I encourage the unceasing dedication of the team of National Herbarium and Plant Laboratories (KATH) to house and maintain thousands of specimens of ferns, mushrooms, and the flowering plants. This ministry continues to support such scientific works and publications. I hope the Department of Plant Resources will be able to liaise with outstanding plant scientists and produce a series of good publications which will enrich the domain of our knowledge.

Introduction
A fully revised annotated checklist and critical account of 550 species and an additional 30 subspecies of pteridophytes, a total of 580 taxa, occurring in Nepal is presented here. It is based on specimens seen and reidentified by the first-named author in the main herbarium holdings from Nepal, which are preserved in K, BM, E, KATH, TUCH, CAL, TAIF, TI and MICH, with smaller holdings in other herbaria he has visited, in addition to his own extensive collections and field study of pteridophytes carried out throughout Nepal over the last 35 years since 1988. It also includes the very large collections made by Nepalese botanists of the Department of Plant Resources since the late 1950s at the National Herbarium, Godawari (KATH), which have been completely revised and critically reidentified by the first named author, as well as the large collections made by the pioneer pteridologist and ornithologist in Nepal, the late Dr. R.L. Fleming Sr., at MICH, KATH, DD (W.C. Nepal, 1949, see Raizada & Vaid (1952», F and BM (and some earlier Fleming collections from Missouri from 1942 etc. are at US). Unfortunately funding has not been available to enable him to complete his recent partial study in E, or his earlier study in US, KYO, INS, TKB and TI, and he has not visited KANA, TUS, TVAT, but images etc. of some of the most important specimens from TI and KYO have kindly been provided recently by Professor K. Iwatsuki, and via Dr. A. Ebihara, but in particular the still un catalogued collections of Dr. Tabata (at KYO) have unfortunately not been possible to study in full.

The present work provides a definitive account of the taxonomy of Nepalese ferns and fern-allies as we now know them, along with precise descriptive diagnoses for their identification and detailed District-listing of their ranges in Nepal including indication of their range in adjacent Himalayan countries, all based on specimens seen and confirmed and determined by CRFJ in many herbaria to be available for beginners and students. It is thus helps to bridge the former gap in our knowledge of Indo-Himalayan pteridophytes where Nepal is concerned, as well as providing an accurate specialist-produced baseline, which he was invited to provide for the account of pteridophytes of the Flora of Nepal (Watson, Pendry & Ikeda 2011, Watson et al. 2011 etc.), and which would otherwise have been entirely lacking. Many new records have been made from the first author's collections and identifications. CRFJ's Nepalese herbarium collections of nearly 6000 numbers (out of a total of over 35,000 numbers of pteridophytes, all listed on computer), made from 1988 to the present day, have recently been entirely revised and re-listed by him and are either incorporated [BM, H, TAIF], or are being actively incorporated [E] in the four main herbaria holding them, BM, E (transferred from NMW), Hand TAIF.

In the list a number of representative collections of every species or subspecies have been cited from many of the Districts under each major region (W., C. and E.) of Nepal. Rare, critical and interesting species have additional collections cited and every species is classified photo geographically and has some brief ecological information and where relevant, its threatened status for India and Nepal added. Photographs taken by the authors are also provided of selected less photographed or less well-known species.

Photogeography of Nepalese pteridophytes The pteridophyte flora of Nepal does not constitute a separate floristic group from that of the rest of the Indo-Himalaya, but consists mostly of eastern Himalayan species belonging to the Sino-Himalayan and S.E. Asian elements in the flora, extending and attenuating westwards towards the west Indo-Himalaya. There are three main floristic elements of pteridophytes in Nepal, along with a small fourth element (see Fraser-Jenkins 1986). It should be noted that many ferns show photo geographical distribution patterns very well due to their light spores being able to blow anywhere. Thus their ranges often approach the maximum possible extent climatically and micro climatically - wherever they are capable of occurring they usually do. But though this applies to most, it evidently does not apply to all species as some remain very restricted and rare for reasons which are not understood despite a few recent artificial attempts to classify the causes of rarity mainly by Russian botanists.

Of the different geographical elements in Nepalese pteridophytes, first there is the relatively small number of European elements of Alpine and Mediterranean affinity which have reached the W. Indo-Himalaya (see Fraser-Jenkins 2014) a small number of which extend eastwards into N.W. and sometimes N.C. Nepal, typical examples being Cystopteris Montana, C. fragile subsp. diaphana, Selenium septentrionale, A. ruta-muraria and a recent geographical vicariate, Aspleniumfontanum subsp. pseudofontanum.

More European elements are known from the far-west Indo-Himalaya (see Fraser-Jenkins 1992, 1993, 2013) in Pakistan and N. W. India. Then the two major, elements in the flora are the S.E. Asian (Malesian) and Sino- Himalayan elements, comprising some 80% of the fern-flora.

The Malesian element, which includes peripheral S.E. Asian species even if not known from the strictly Malesian area itself in a few cases, consists mostly of subtropical species, connected via Myanmar and Thailand to S.E. Asia, such species are mostly found at lower-mid to mid altitude in the Siwalik and Mahabharata ranges, which are the outer to mid-ranges of hills and mountains, south of the main Himalayan ranges. They include species such as Selaginella ciliaris, Pteris biaurita, Microlepia rhomboidea and M speluncae, Diplazium sikkimense, Dryopteris sparsa, Bolhitis heteroatom and Stenochfaena palustris.