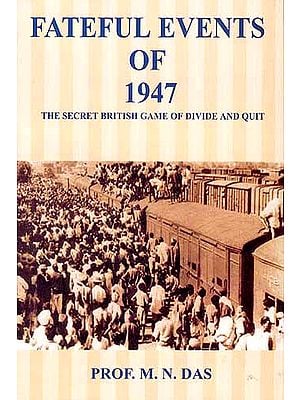 The year was full of fateful events since the surgery of separation was an unusual phenomenon, causing immense blood letting. Compressed between the natural demand for national unity and an artificially engineered two-nation theory, the desperate British went in for a comprehensive conspiracy to take advantage of the continuing communal civil war for achieving their sinister design of 'Divine and Quit'.

This book, constructed from original source-material including confidential documents of some of the British Viceroys and officers as well as some letters of Winston Charchill to Muhammad Ali Jinnah deals with the intricacies of the problems which over-whelmed the great men of India like inexorable forces of time. Everybody played his role and an ancient country. But, Time was against India's formidable patriots who had to suffer the agony of seeing their life's hopes disappear in disappointment.

1947 will ever remain a turning point of history as the year of triumph and tragedies to be remembered by generation to come. This book will be of because immence use to students, scholars and general readers it provides a detailed insight into the happenings of that eventful year.

Born in 1926, M.N. Das obtained M.A. Degree from Allahabad University, Ph. D. from London University, and, D. Litt. From Utkal University. He served as a Professor of History for two decades and retired as the Vice-Chancellor of Utkal in 1985. besides awards, he received several academic assignments in different countries during his long career of 37 years as a teacher in history. Two of his books were published in U.K. and one in U.S.A., and a number of them in India. He also compiled the third volume of the Centenary History of the Indian National Congress (1935-1947), released in 1985.

Das requested Earl Mountbatten in 1976 to release his files of Indian Viceroyalty, since 30 years had passed after Indian Independence and under the British Archival Rules, all Papers in his possession were no longer his personal property, but Archival Property of the Country. Soon after Mountbatten's untimely death, his son-in-law, Lord Brabourne, gave a special permission to Das to consult confidential files and other collections of the last British Viceroy of India. Das became the first Indian scholar to utilize that privilege.